[0001] The object of the invention pertains to the technical field of diagnostic imaging.
[0002] More specifically, this document describes a methodology that enables the amount of visceral fat mass in a living being to be determined in a non-invasive manner.

[0020] The object of the present invention is a method for estimating fat in the abdominal cavity (known as visceral fat) which may be useful in data collection applications used to make decisions related to the prediction of cardiovascular risk and metabolic syndrome. The method object of the invention is based on volumetric reconstruction techniques by means of medical imaging of dual-energy X-ray absorptiometry (DXA). The method object of the invention provides an optimal solution to the aforementioned problem, since it enables obtaining the values of the amount of fat mass very similar to those obtainable when using methodologies that are slower or more harmful to human beings due to the large amount of radiation that they can require.
[0021] Therefore, the method object of the invention uses a subject-specific abdominal recognition module with three-dimensional geometry that calculates the distribution of abdominal fat deposits thanks to the generation of 3D models which are obtained from a 2D image extracted from the densitometer and a 3D image extracted from the Computed Tomography (CT), with the aim of reconstructing the abdominal cavity to subsequently assess the distribution of visceral (VAT) and subcutaneous fat (SAT). From said data, the amount of fat mass is calculated, identifying the location thereof in the abdominal cavity. To carry out the method for estimating visceral fat (VAT) object of the invention, variable geometric models are used that are not only ellipsoidal, but also hyper-ellipsoidal geometric models or others that better adapt to the area of study in which the amount of visceral fat mass is to be estimated.
[0022] The estimation is carried out in such a way that the calculation to quantify the visceral fat (VAT) mass is carried out by calculating the subcutaneous fat (SAT) mass, based on the estimation of the subcutaneous thickness and a percentage of fat contained in the subcutaneous tissue, and subtracting it from the total fat mass obtained from the DXA image. In the case of obtaining a negative value of visceral fat (VAT) mass, it is corrected by assigning it a null amount to avoid overestimating the visceral fat (VAT) that may lead to false positives; thus avoiding the overestimation of the visceral fat (VAT) mass over the overestimation of the subcutaneous fat (SAT) mass which is the most suitable from the point of view of the application of the object of the invention.
[0023] Volumes are calculated for a set of coordinate values (x,y) corresponding to a selected region of interest (ROI). The volume corresponding to each coordinate (x,y) is determined based on values of the heights H(x,y) and h(x,y), which correspond to the height of each coordinate (x,y) with respect to a reference, such as a surface like the gurney on which the subject rests during imaging. To obtain the value of these functions, a database of geometries of the abdomen and of the abdominal cavity of known patients obtained from CT or MRI scans, and in which the value of H(x,y) and h(x,y) has been previously measured, can be used. The geometries that will be used to calculate the volume of the subject under study are those with a greater degree of similarity to the geometry of this subject, according to the abdomen and abdominal cavity diameter at different heights of the ROI and according to the abdomen and abdominal cavity depth.
[0024] Once the values of the functions H(x,y) and h(x,y) are obtained, the tissue thickness corresponding to the subcutaneous fat (SAT) mass e(X,Y) is estimated. To estimate the subcutaneous fat (SAT) mass, the thickness thereof is multiplied by the dimensions given by the resolution Rx*Ry of the DXA images, the fat density ρFat and the ratio of fat in the subdermal tissue %Gsubd. This final data is obtained by measuring the ratio of subcutaneous fat (SAT) mass in the area exclusively composed of subcutaneous tissue and located on the sides of the abdomen in the density processed fat (DPF) image.
[0025] Thus, the thickness of the tissue corresponding to subcutaneous fat (SAT) underlying the pixel of coordinates (X,Y), e(x,y) is calculated by means of:

[0027] The amount of visceral fat (VAT) mass in the pixel (x,y), underlying the abdominal cavity, MVAT(x,y) is calculated by means of:

The amount of subcutaneous fat (SAT) mass throughout the entire ROI is obtained in the following way:

[0029] The total amount of visceral fat (VAT) mass throughout the entire ROI is obtained in the following way:

[0034] Therefore, the corrected total amount of subcutaneous fat (SAT) mass is obtained in the following way:

[0035] The estimation is carried out based on the 3D reconstruction, the geometric modelling of the abdominal cavity and the distribution of the fat content per pixel and a percent of the fat mass and the processed fat obtained from the corresponding signals of the DXA scan.

[0036] As a complement to the description provided herein and for the purpose of helping to make the characteristics of the invention more readily understandable, in accordance with a preferred practical exemplary embodiment thereof, said description is accompanied by a set of drawings constituting an integral part of the same, which by way of illustration and not limitation represent the following:

Figure 1 shows the main radiological images obtained by means of the DXA technique.

Figure 2 shows an illustration wherein the region of interest (ROI) is defined in a medical image.

Figure 3 shows a series of illustrations wherein the segmentation of Computerized Tomography (CT) is shown.

Figure 4 shows the reconstruction of the depth of the patient's body, with which the abdominal depth will be estimated.

Figure 7 shows the profile of the difference between the functions H and h, the thickness of the tissue corresponding to subcutaneous fat (SAT).

Figure 8 shows the geometric model for reconstructing the patient's abdomen and abdominal cavity, pixel by pixel.

• fat mass (FM) images comprising information about an amount of fat mass in each pixel of the image,

• a combined image generated from two signals, one high energy (HE) signal and one low energy (LE) signal, and

and in that it comprises:

• selecting a region of interest (ROI) based on a contrast between bones and soft tissues of the bone density (BMD) images,

• enhancing the contrast in the region of interest (ROI) between the subcutaneous tissue and the abdominal cavity by combining high energy (HE) images and low energy (LE) images,

• determining the external contours of the abdomen and of the abdominal cavity from the high energy (HE) images and low energy (LE) images by a combination thereof, generating a combined image with enhanced contrast,

∘ detecting contours by means of enhancing the contrast between the subcutaneous fat tissue (SAT) of the sides of the image resulting from the combination of the high energy (HE) images and low energy (LE) images and the abdominal cavity in the middle of the image and a smoothing of discontinuities,

∘ determining contour geometries and estimations of abdominal depth H(x,y) and of abdominal cavity depth h(x,y), from the geometries obtained by means of Computerized Tomography,

• calculating an amount of subcutaneous fat (SAT) mass for each pixel of coordinates (x,y) of the region of interest (ROI) such as MSAT (x,y) according to:

▪ ρFat is the value of the fat density,

▪ [%GSAT] is a percentage value of subcutaneous fat (SAT) mass in the subdermal tissue,

▪ Rx, Ry is the resolution of DXA in X and in Y respectively

and the product thereof given the dimensions of the pixel (x,y), the density of fat ρFat and the ratio of fat in the subdermal tissue [%GSAT], obtained by measuring the ratio of subcutaneous fat (SAT) mass on the sides of the ribs in the density processed fat (DPF) image,

• adding up the corrected amount of visceral fat (VAT) mass in the entire region of interest (ROI), and 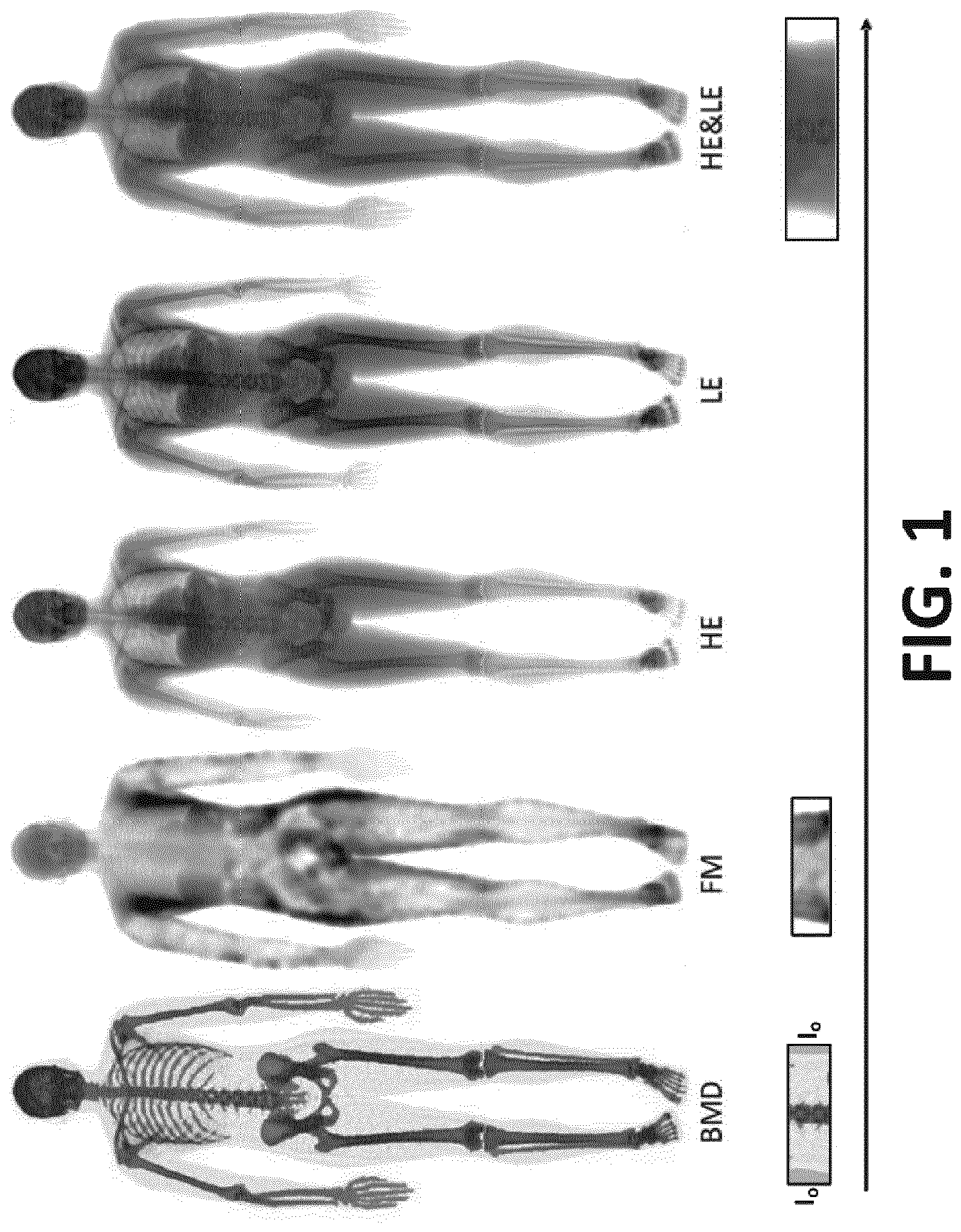 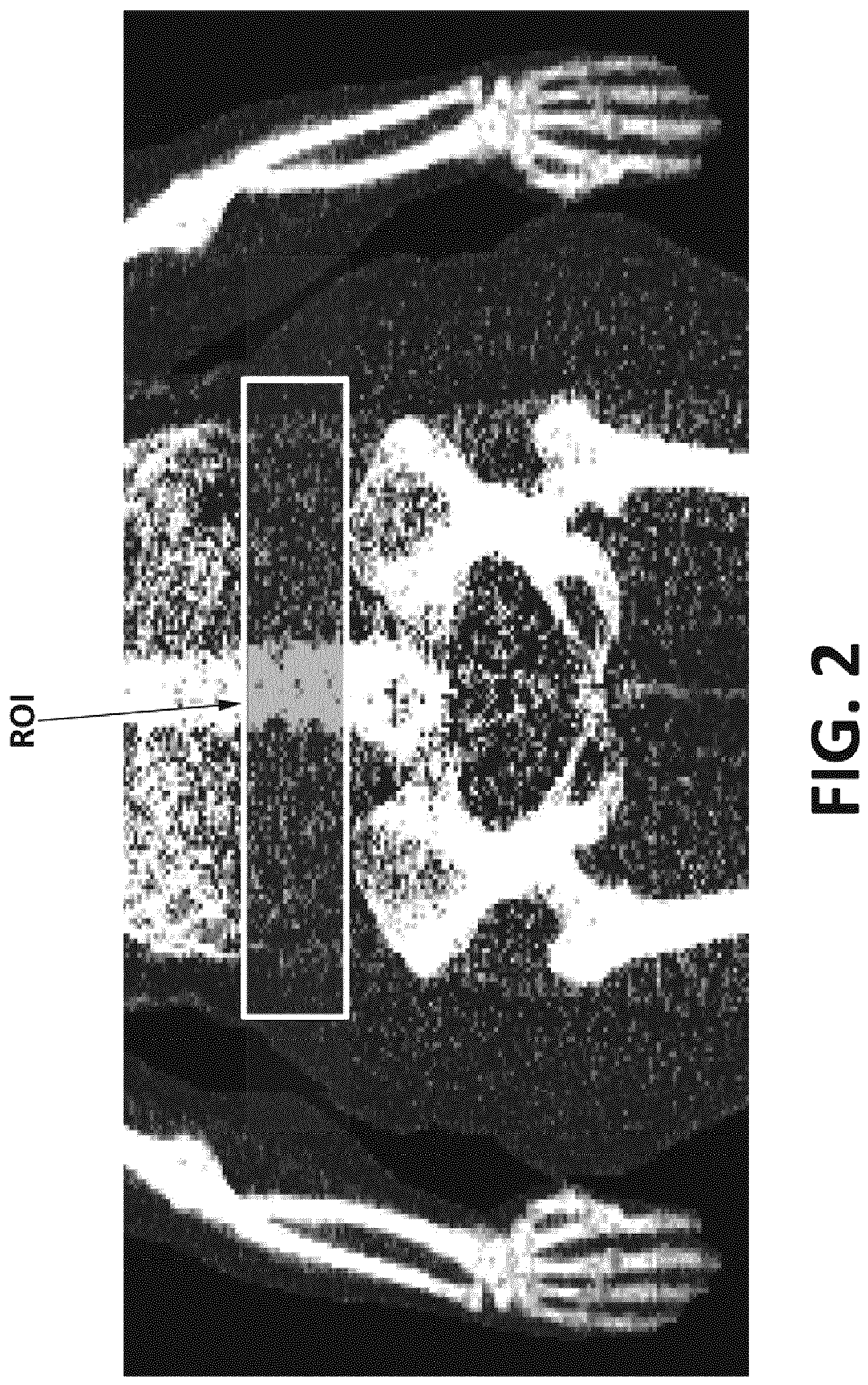 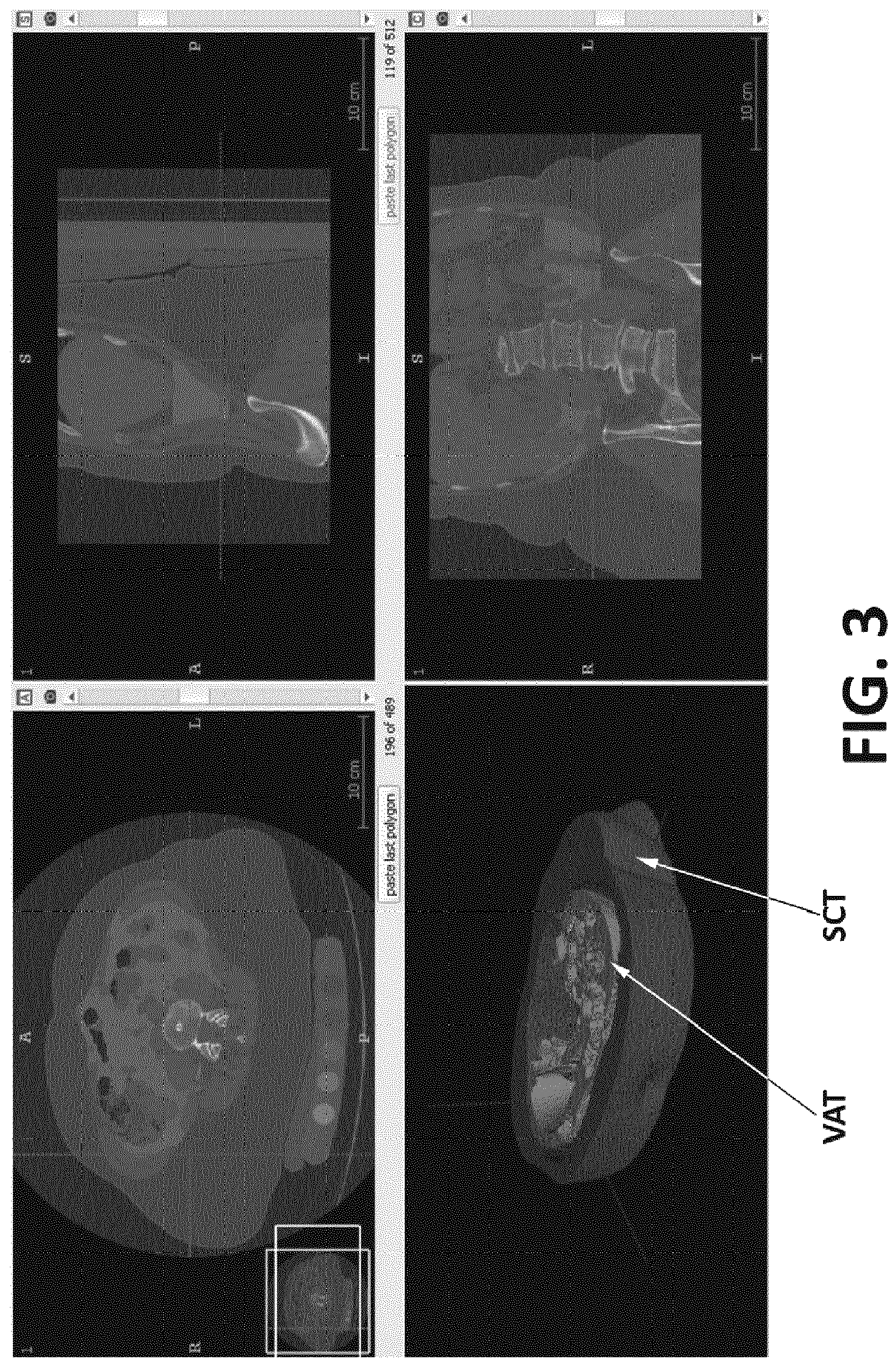 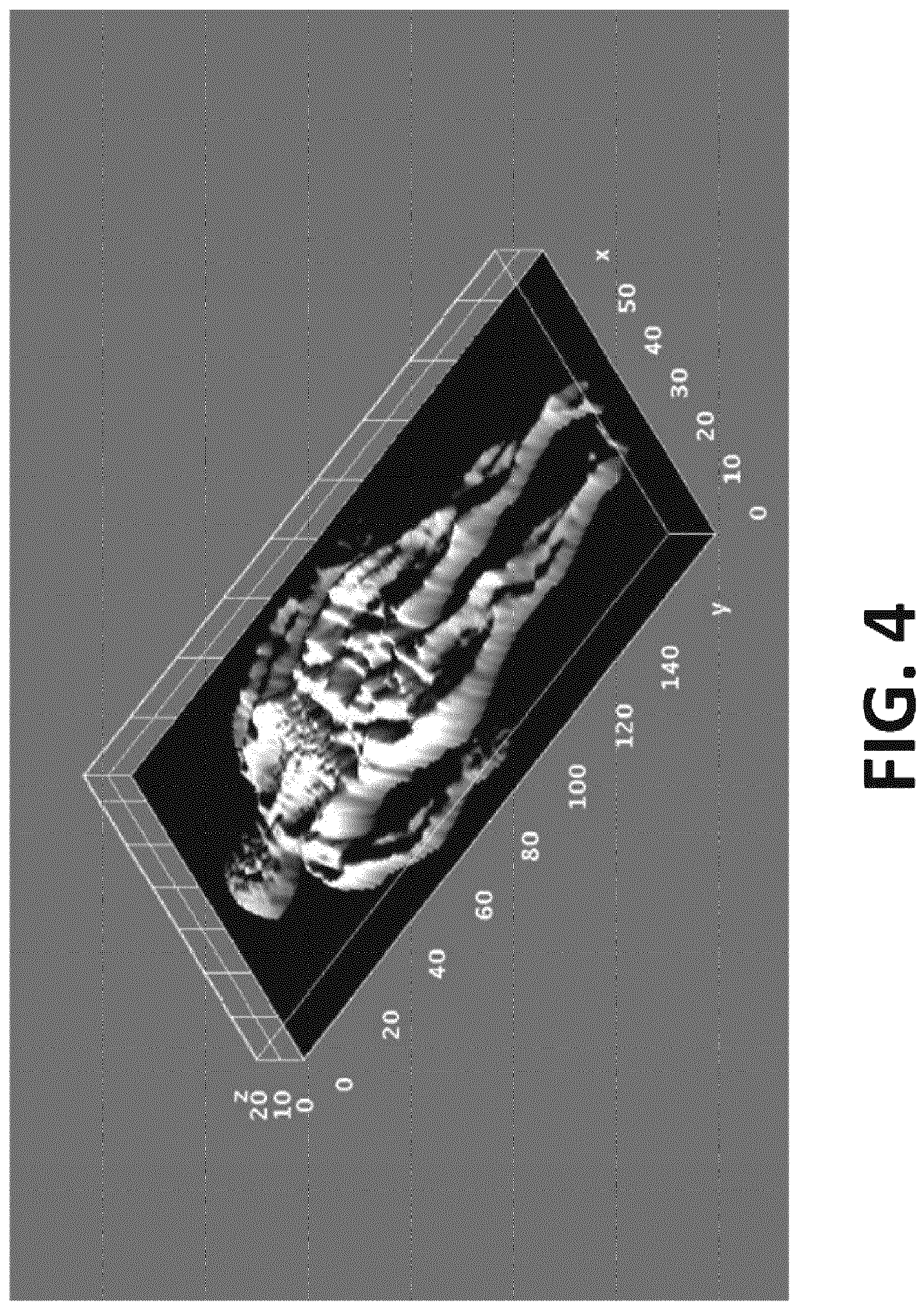 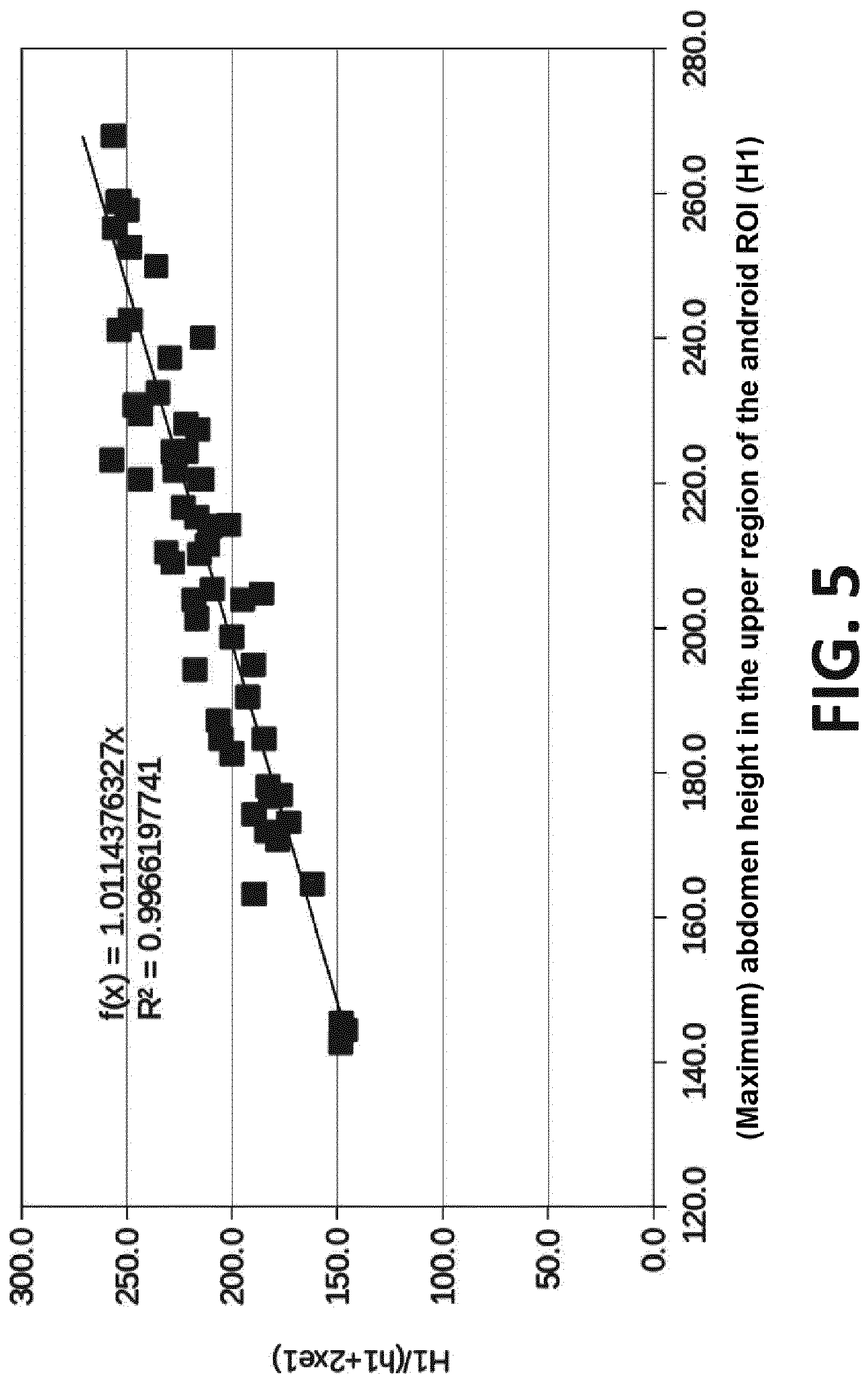 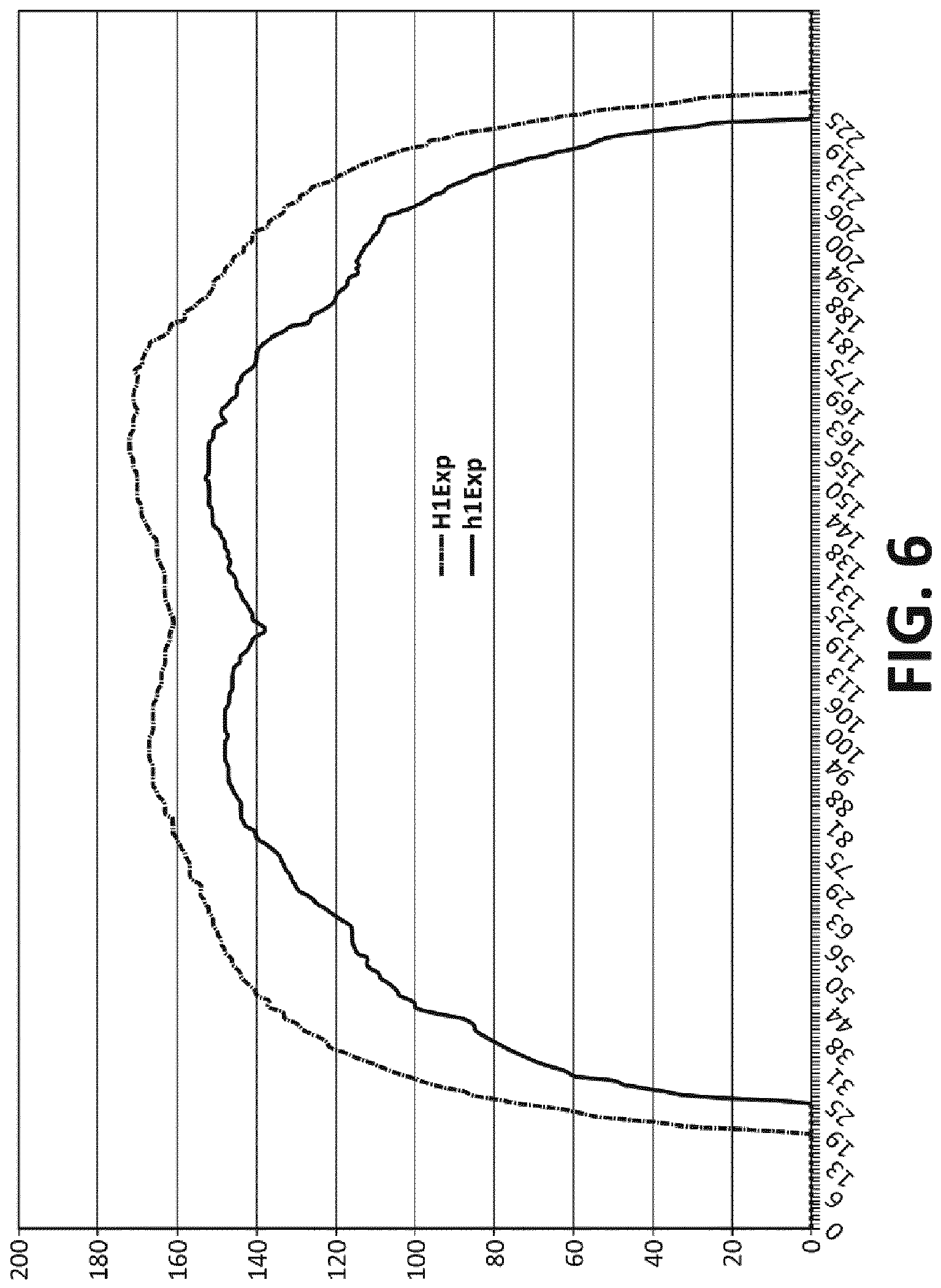 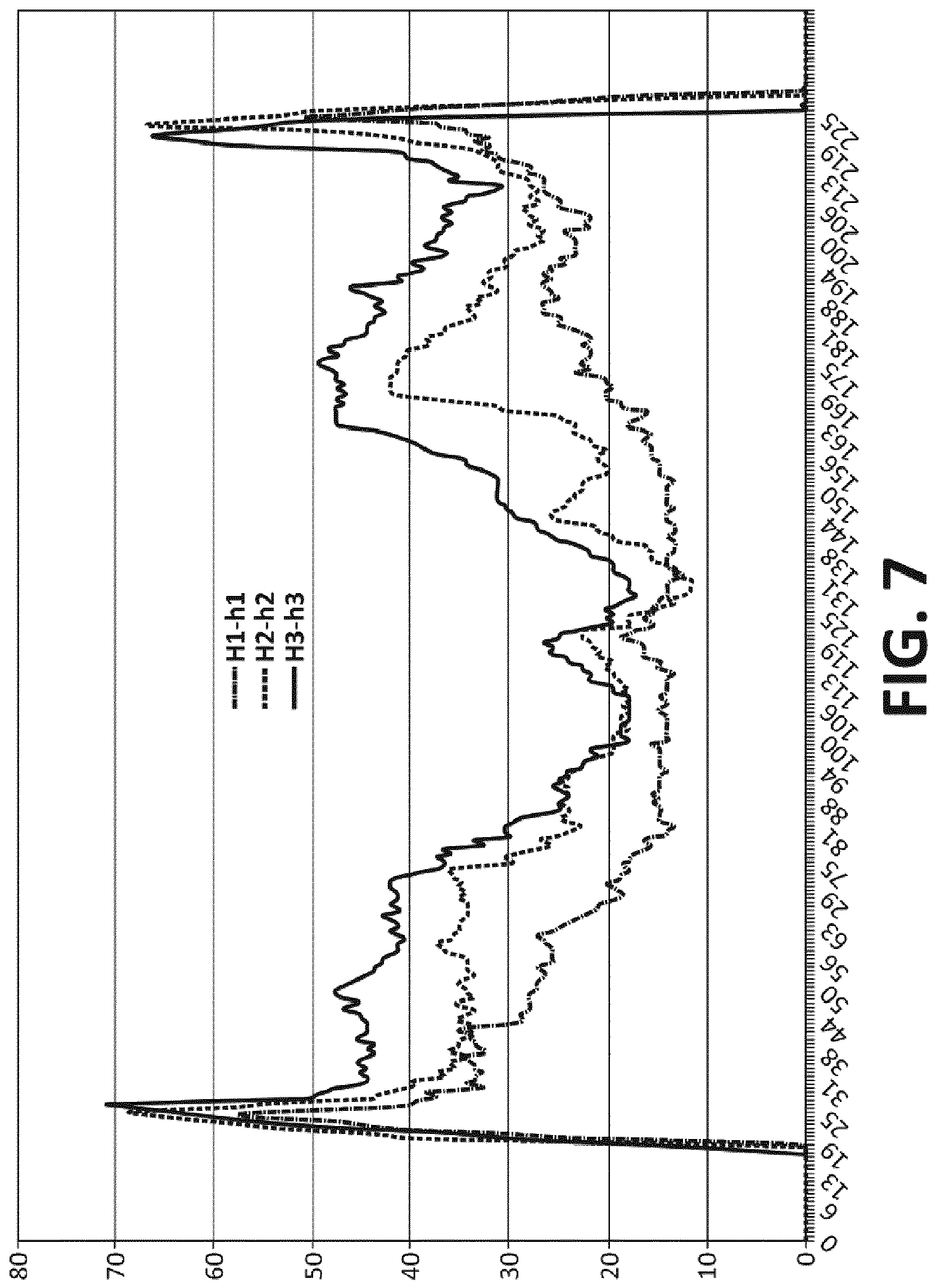 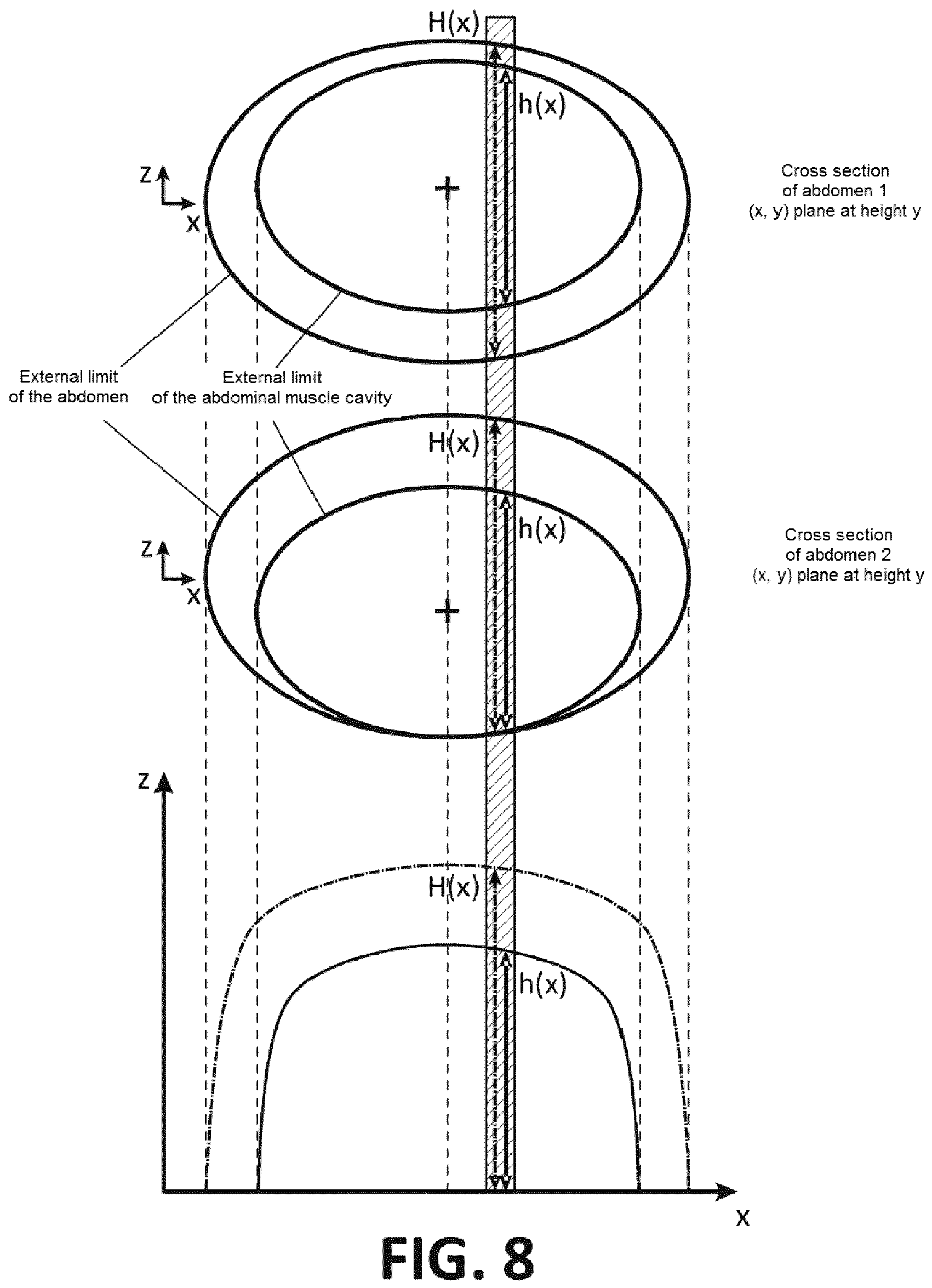 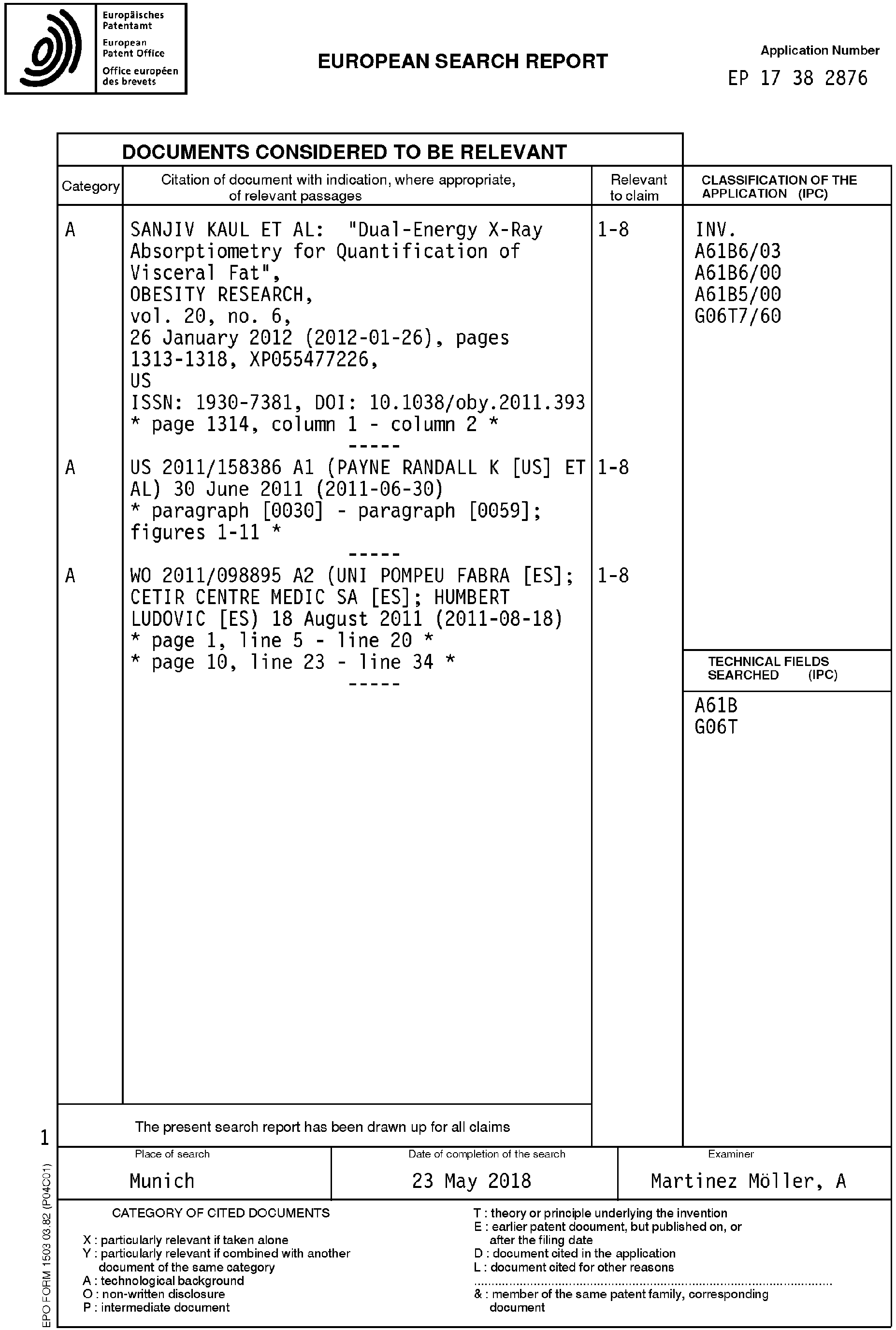 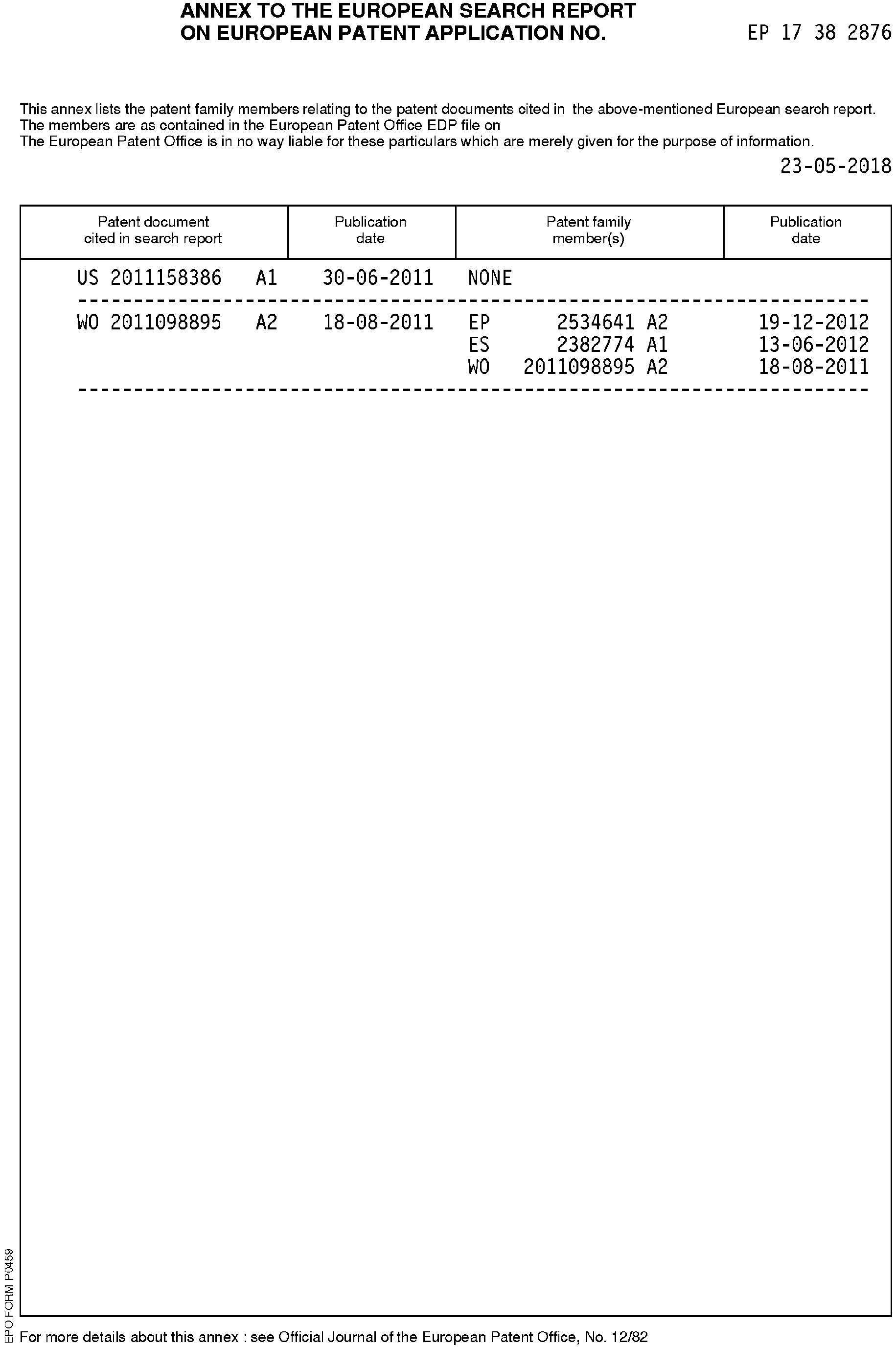