[0001] The present invention relates to the use of an oxytocin receptor antagonist in females undergoing embryo transfer as part of an assisted reproductive technology. Specifically, the antagonists are released in the luteal phase when the endometrium is receptive for embryo implantation.

Figure 1: Examples of oxytocin receptor antagonists (Figure 1A and Figure 1B)

DETAILED DESCRIPTION OF THE DISCLOSED EMBODIMENTS

wherein Mpa, lie, Asn and Abu have the following meaning:

Bergh PA, Navot D. The impact of embryonic development and endometrial maturity on the timing of implantation. Fertil Steril 1992; 58: 537-542.

[0076] All patent and literature references cited in the present specification are hereby incorporated by reference in their entirety.
[0077] The invention is further explained in the following examples. These examples do not limit the scope of the invention, but merely serve to clarify the invention.

Example 1: A randomised, placebo-controlled, double-blind, parallel groups, multinational, multicentre trial assessing the effect of barusiban administered subcutaneously on the day of transfer on implantation and pregnancy rates in IVF/ICSI patients

[0078] BASIC was a randomised, double-blind, placebo-controlled, parallel groups, multinational, multicentre trial. It was designed to evaluate the effects of barusiban, administered either on the day of cleavage-stage embryo transfer or on the day of blastocyst transfer, on ongoing implantation rate in IVF/ICSI patients. The patients underwent controlled ovarian stimulation in the long GnRH agonist or GnRH antagonist protocol, received hCG for triggering of final follicular maturation, had undergone oocyte retrieval, and had daily luteal phase support by supplementation with vaginal progesterone starting on day 1 post-retrieval, and transfer on day 3 or 5 post-retrieval. Patients were randomised in a 1:1 ratio to either the barusiban group or the placebo group, with stratification according to the day of transfer (day 3 post-retrieval or day 5 post-retrieval) and the number of embryos/blastocysts to be transferred (1 or 2). In total, 255 IVF/ICSI patients were randomised in the trial and contributing with 440 embryos/blastocysts.
[0079] Investigational medicinal product, i.e. barusiban or placebo according to randomisation, was administered as subcutaneous injections at two time points: 1st administration of 40 mg barusiban or placebo was 45 min prior to transfer and the 2nd administration of 10 mg barusiban or placebo was 60 min after the 1st administration.
[0080] Transfer was performed on day 3 (cleavage-stage embryos) or day 5 (blastocysts) after oocyte retrieval. On day 3, only embryos of good quality defined as ≥ 6 blastomeres and ≤ 20% fragmentation could be transferred. On day 5, blastocysts with expansion and hatching status 3, 4, 5 or 6 could be transferred. The actual number of transferred embryos/blastocysts for each individual patient depended on the availability of embryos/blastocysts of the required morphological quality, local regulations and clinical practice for the patient's age, but the maximum number was 2.
[0081] Key aspects related to the transfer procedure had been standardised. A speculum was inserted into the vagina and cleaning of the vagina and cervix was done according to local practices but with minimal manipulation and disturbance. Soft or ultrasoft catheters were used. The outer sheath of the catheter was inserted just protruding to the internal os (i.e. keeping the outer sheath in the cervical canal). The embryo(s)/blastocyst(s) were loaded into the inner sheath which was then inserted through the outer sheath. Using abdominal ultrasound guidance, the embryo(s)/blastocyst(s) were placed 1.5-2.0 cm from the fundus. The time from loading the inner catheter to placing the embryo(s)/blastocyst(s) should not have exceeded 1 min. After placement, the inner and outer catheters were withdrawn and checked for retained embryo(s)/blastocyst(s), mucus and blood. After confirmation that there were no embryo(s)/blastocyst(s) left in the catheters, the speculum was subsequently removed; this occurred approximately within 2 min after placement of the embryo(s)/blastocyst(s). Any difficulties/eventualities occurring during the transfer procedure were recorded.
[0082] Patients received vaginal progesterone tablets 100 mg twice daily from the day after oocyte retrieval and until the day of the clinical pregnancy visit. On the day of transfer, patients should insert the progesterone tablets at least 3 hours before transfer and at least 3 hours after transfer. Ongoing implantation rate (primary endpoint) was defined as the number of intrauterine viable fetuses 10-11 weeks after transfer divided by number of embryos/blastocysts transferred.
[0083] With respect to statistical methodology, the primary hypothesis was tested using a logistic regression model with ongoing implantation (yes/no) as the outcome and treatment and randomisation strata as factors. The treatment effect is presented on the odds ratio scale, as this represent the outcome of the logistic regression analysis; an analysis that allows for inclusion of factors and co-variates. Adjustment for potential imbalanced distribution between treatment groups of for example quality of the transferred embryos/blastocysts was described in the statistical analyses planned for the BASIC trial. It must be stressed that the odds ratio based on the logistic regression model provides the most appropriate way of representing the data and the basis for evaluation of treatment effect. 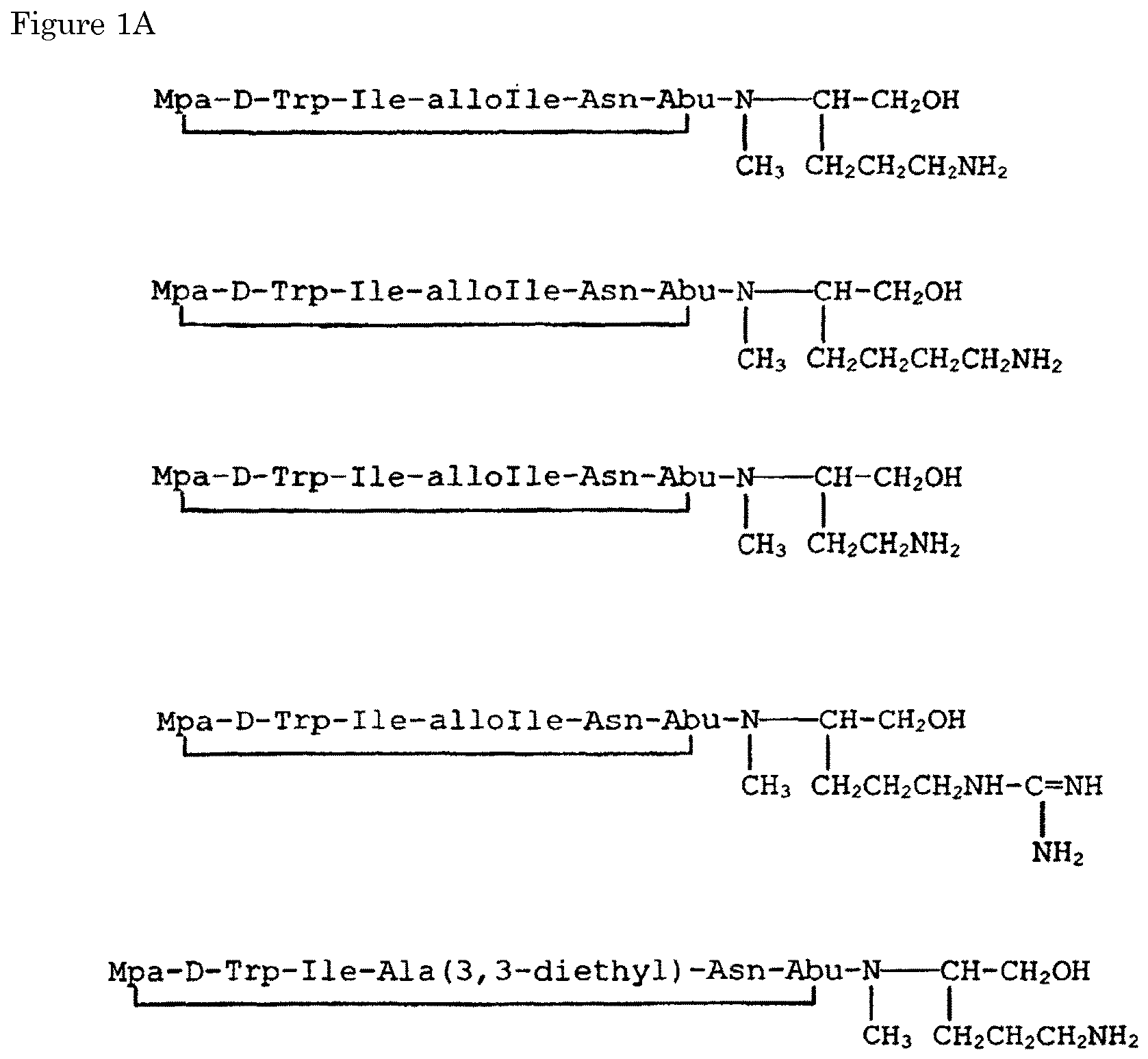 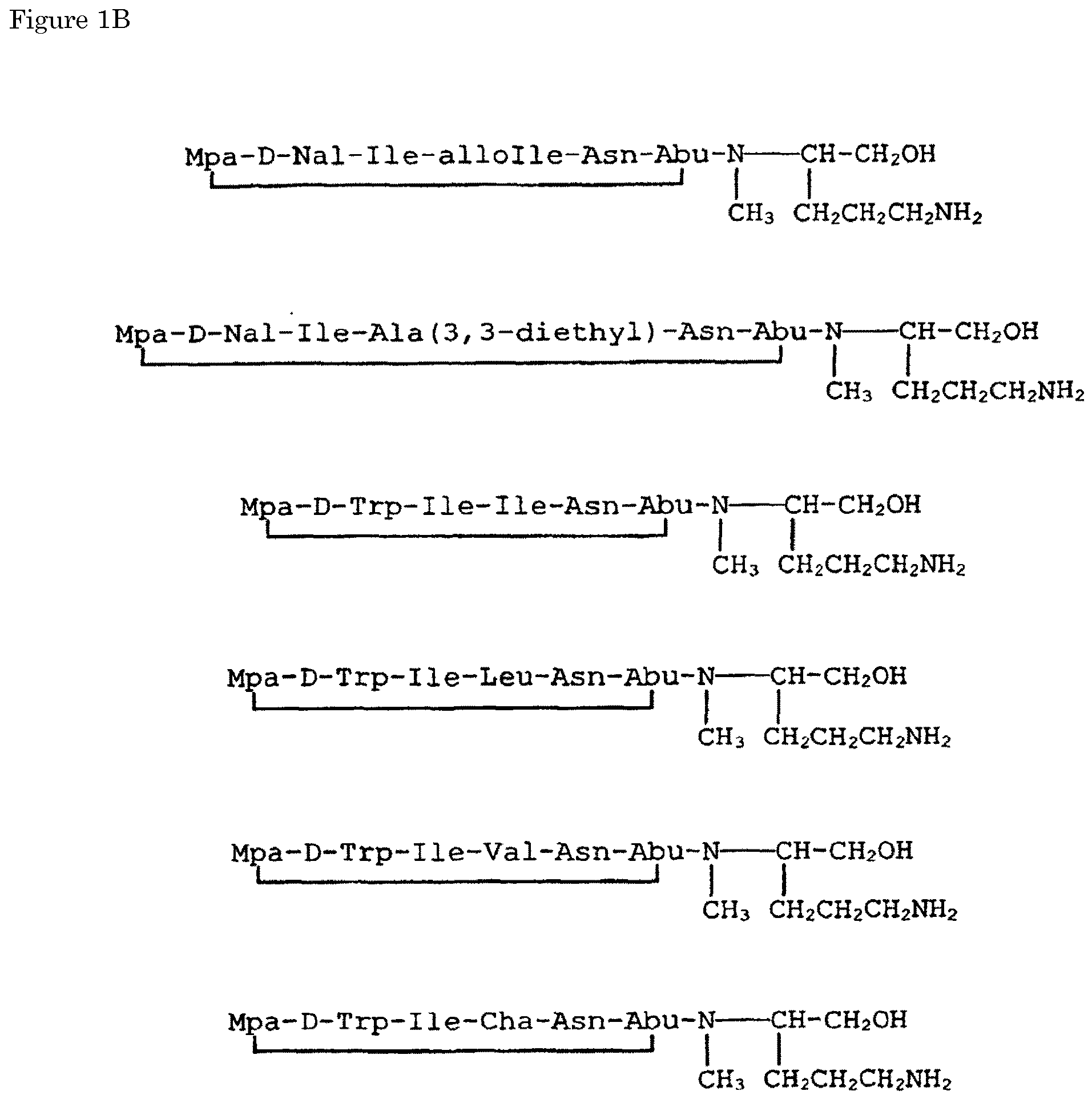 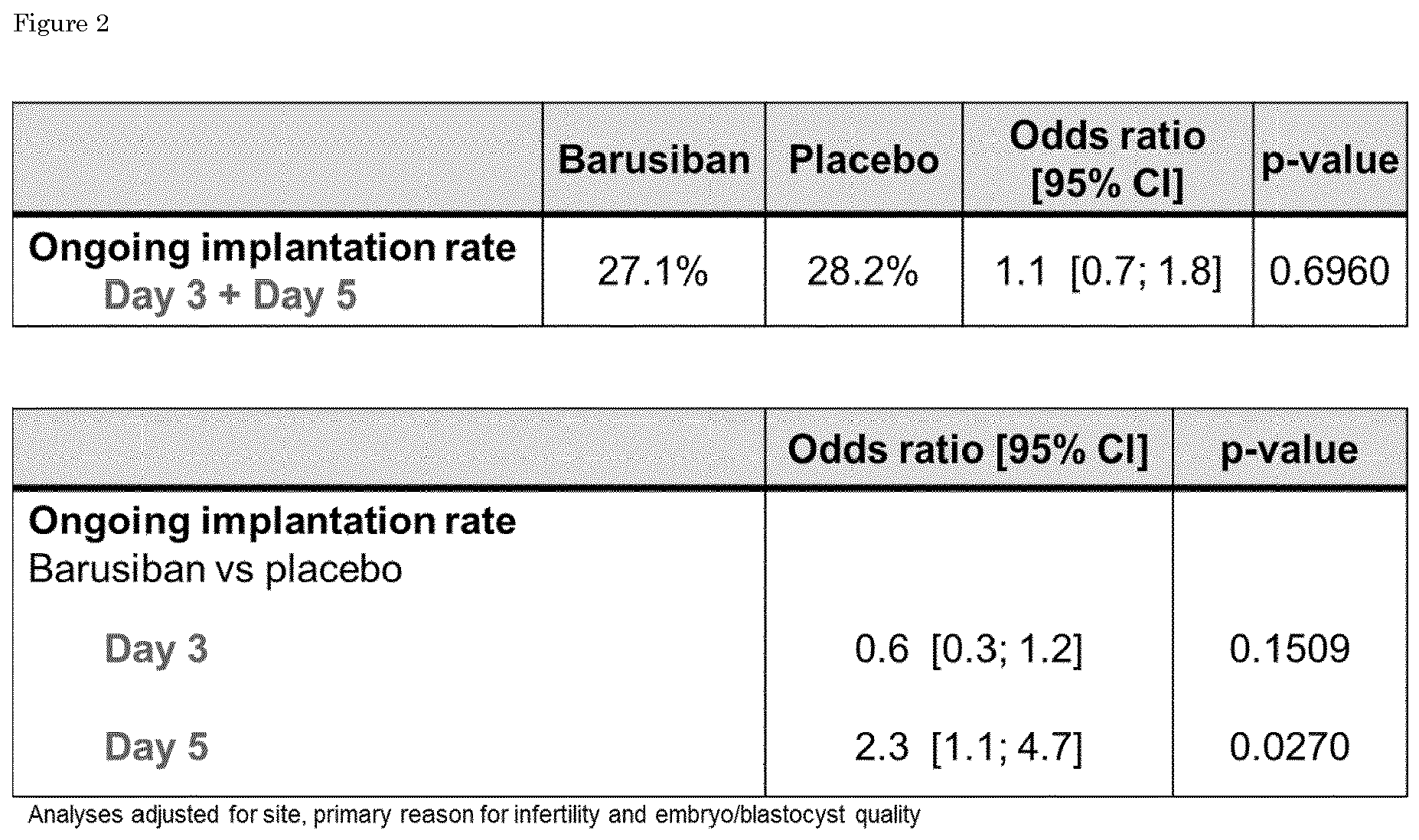 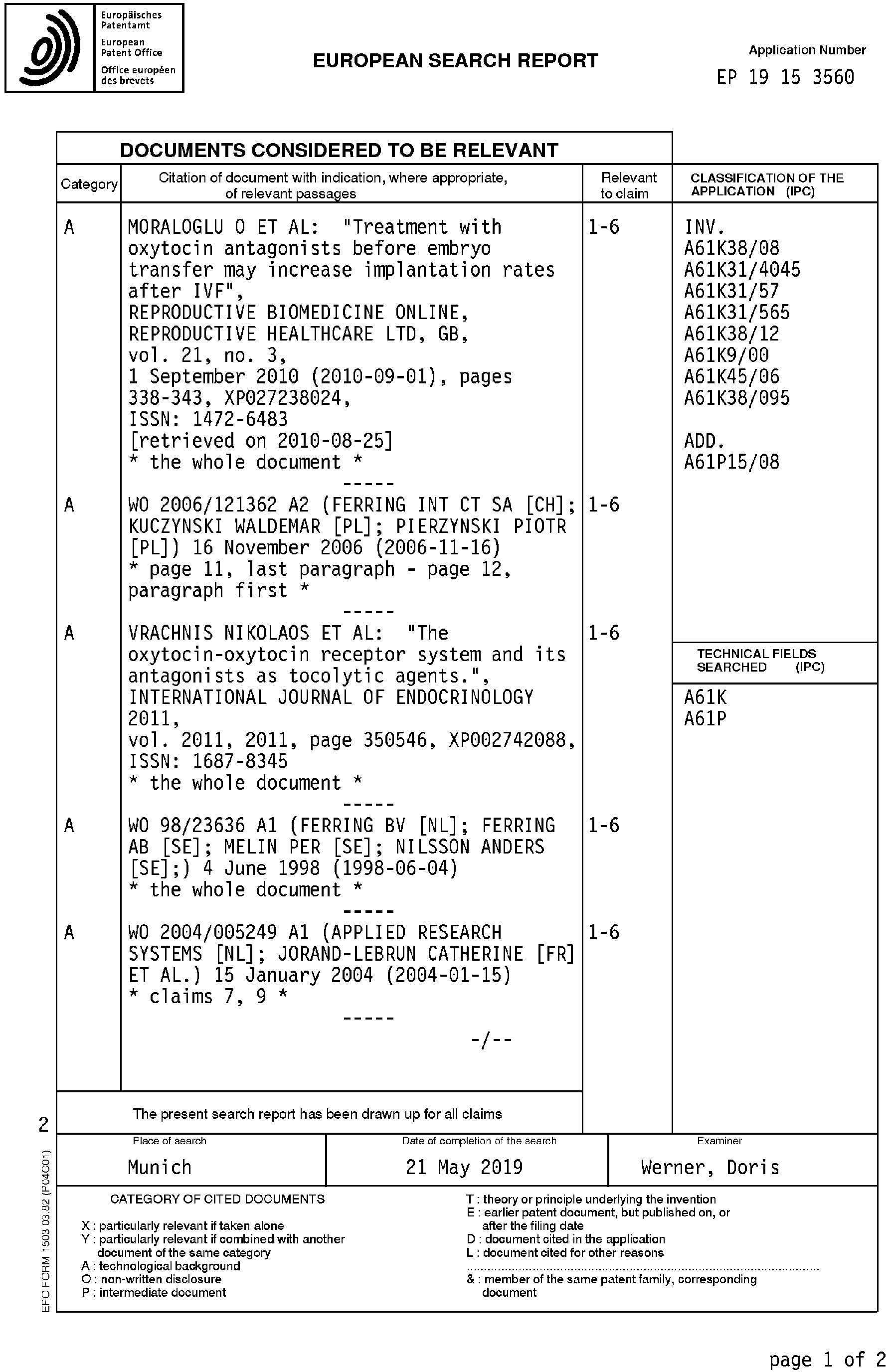 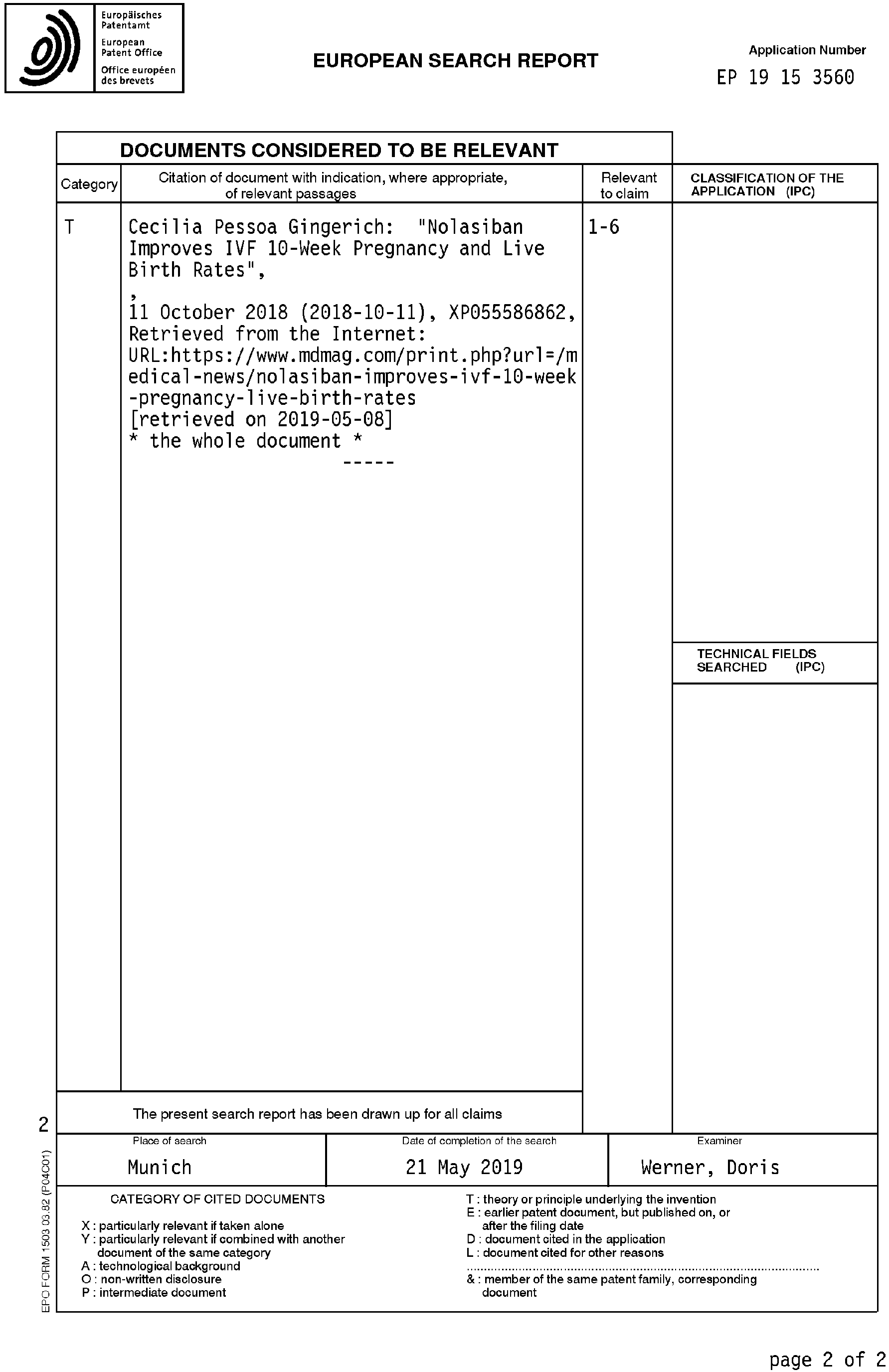 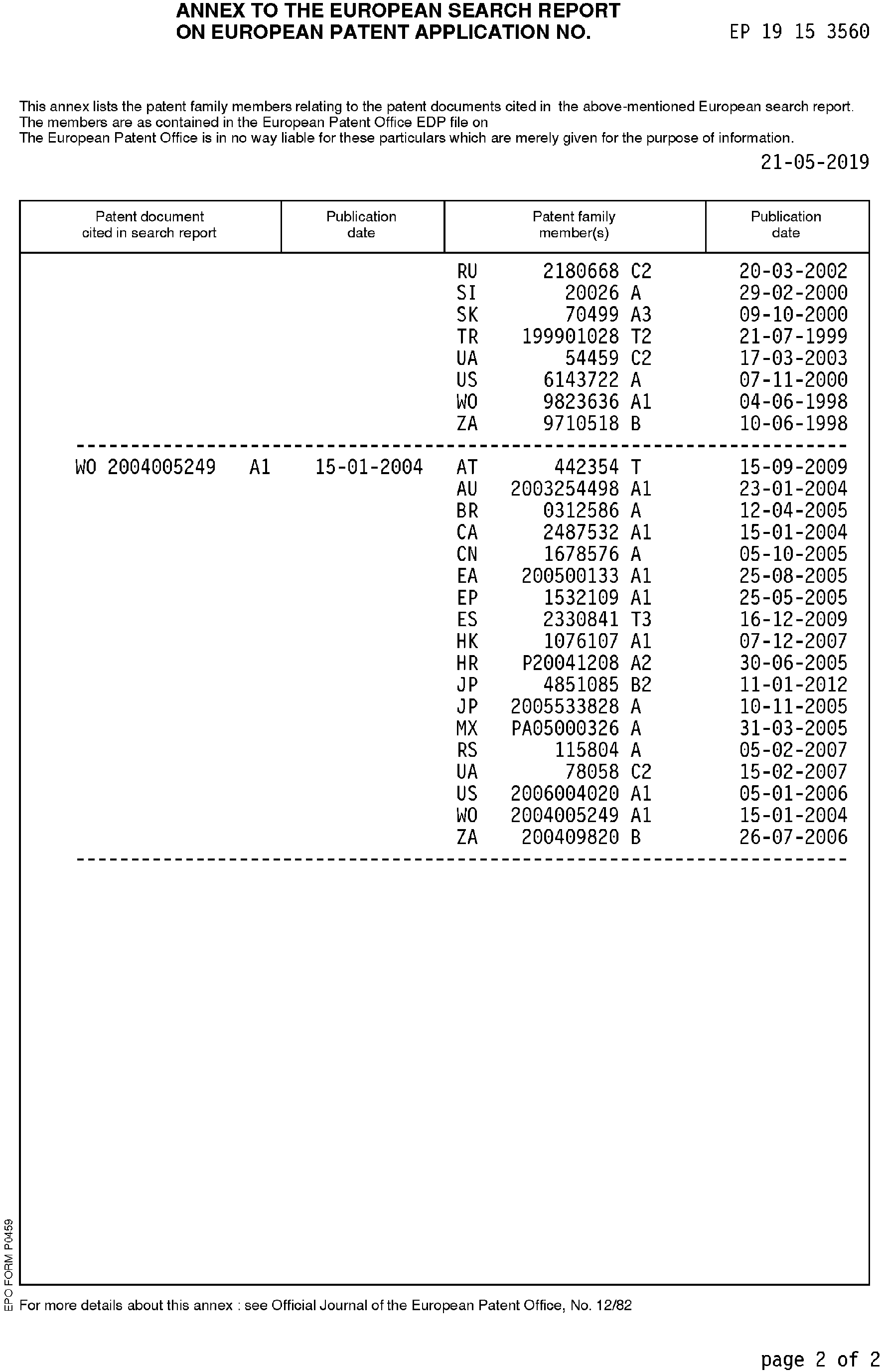