[0001] The invention relates to the field of computer programs and systems, and more specifically to a method, system and program for three-dimensional (3D) reconstruction.

[0015] It is therefore provided a computer-implemented method for 3D reconstruction. The method comprises providing a 3D point cloud representing a real object. The method also comprises fitting the 3D point cloud with parametric surfaces. The method also comprises defining a partition of the parametric surfaces into oriented facets which respect intersections between the parametric surfaces. The method also comprises determining, among the oriented facets of the partition, a set of facets that represents a skin of the real object. The determining comprises minimizing an energy. The energy includes a data term and a constraint term. The data term increasingly penalizes discarding facets, as a level of fit between a discarded facet and the 3D point cloud increases. The constraint term penalizes formation of non-skin geometry by kept facets.
[0016] The method may comprise one or more of the following:
[0017] It is further provided a computer program comprising instructions for performing the method.
[0018] It is further provided a computer readable storage medium having recorded thereon the computer program.
[0019] It is further provided a system comprising a processor coupled to a memory, the memory having recorded thereon the computer program.

[0020] Embodiments of the invention will now be described, by way of non-limiting example, and in reference to the accompanying drawings, where:

3. Compute the set of "facets" forming the partition (S30)

[0082] A graph containing a set of nodes (N) and a set of arcs (A) may be considered. Each node of the graph represents a facet and graph arcs link neighboring facets. Note that each edge links four facets: the two facets of a given parametric surface sharing an edge but also the two facets of the parametric surface generating the intersection sharing the same edge. This is illustrated by FIG. 6.
[0083] FIG. 6 shows, on the left side, two parametric surfaces intersect each other. It is supposed that those surfaces intersect with other surfaces (not represented). Facets 1, 2, 3 and 4 are delimited by those intersections. Facets 1, 2, 3 and 4 share an edge: the intersection between the surfaces shown on FIG. 6.
[0084] FIG. 6 shows, on the right side, that as facets 1, 2, 3 and 4 share an edge, the nodes representing them in the graph are all linked by an arc. The nodes are eventually linked to other nodes, representing other neighboring facets (dotted arcs on the figure).
[0085] A label (ln) "keep" or "discard" may be associated to each node (n) as well as a fitting measure (fmn). The fitting measure evaluates how well a facet fits the input point cloud.
[0086] In a tested implementation the fitting measure corresponded to a facet density (i.e. a density of points of the 3D point cloud corresponding to the facet, e.g. a given point corresponding to a respective facet if the respective facet is the nearest one to said given point), computed by dividing the number of points previously associated to a corresponding facet by the area of the facet. The fitting measure may be normalized between 0 and 1. For example, by setting a maximum density and dividing each fitting measure by this value, if the obtained results is higher than 1 it is set to 1. Other fitting measures may be implemented.

5. Define the energy function over the graph (S40)

where Edata represents the data term and may be minimized when the obtained surface best fits the input data. Econstraint represents the constraint term, which heavily penalizes the energy if the obtained surface is not closed. The role of this second term is to enforce the fact that the final solution should tend to be a closed hull.
[0088] A possible basis of definition of both terms is provided below.

[0089] In a tested implementation the following basis data term was considered (other terms may however be considered):

is the indicator function:

[0091] In a tested implementation the following basis constraint term was used (other terms may however be contemplated):

[0092] It is a squared addition over every arc (a) of the set of graph arcs (A) of the arc constraints (ca) multiplied by a weighting factor λ. For every arc (a) an arc constraint (ca) was defined such that it is non-zero if the facets associated to nodes linked by the edge and labelled as "keep" violate the conditions to form a closed hull, and zero otherwise. In particular, the constraint is non-zero if:
[0093] In order to explicit all the possible cases one may consider the nodes linked by an arc e indexed from 1 to 4. Nodes 1 and 2 correspond to facets lying in the same parametric surface and nodes 3 and 4 correspond to facets lying in a parametric surface intersecting with the previous one. This is illustrated by FIG. 7.
[0094] FIG. 7 represents schematically four neighboring facets (cross-section view). Facets 1 and 2 belong to a parametric surface (schematized by a planar surface) and facets 3 and 4 belong to another parametric surface (also schematized by a planar surface) intersecting with the previous one. "in" and "out" sides of the facets are also indicated.
[0095] The different possible configurations are explicitly schematized in the table of FIG. 8 where dotted lines represent "discard" labelled facets and solid lines "keep" labelled facets.
[0096] The weighting factor λ may be large enough so that if a single constraint is violated (having non-zero value) the global error (E) is not minimized. Minimizing this term enforces thus that the obtained surface is closed.
[0097] Other costs function than (λ ·)2 may alternatively be implemented.

[0098] The energy function (E) depends on the nodes' labels which take discrete values (ln ∈ {"keep", "discard"}). Minimizing that energy may thus consist in finding the combination of nodes with labels "keep" or "discard" that corresponds to a minimal value. Such a combinatorial problem may only be solved by testing all possible combinations of labelling and keeping the one corresponding to the minimum energy. When the number of facets grows, solving the problem may become difficult or impossible because the number of combinations to test is extremely elevated.
[0099] Instead, the problem may be relaxed. It may consist in approximating it by a similar but easier problem to solve. To this end, the method of the example may associate the label "discard" to the numerical value 1 and the label "keep" to the numerical value 0 and define the relaxed labels

to take real values between 0 and 1

[0102] In a tested implementation, the following relaxed data term was used:

which behaves similarly to the proposed discrete data term Edata when

("keep") and linearly between those values.
[0103] Other data terms may alternatively be implemented.

[0104] In a tested implementation the following relaxed constraint term was used:

[0105] Again, other costs function than (λ ·)2 may alternatively be implemented.
[0106] Using the node indexation introduced previously with reference to FIG. 7, an explicit formulation of the relaxed constraint

may be defined as it follows:

[0107] The first term of the constraint penalizes the incompatibility of nodes 1 and 3 to be both labelled as "keep", this incompatibility being a direct consequence of constraint b) and is illustrated in the third, fourth and fifth row of the table of FIG. 8. If

are both near 0, the term has a positive value. However, if at least one node is labelled as "discard", having a regularized label of 1, the term has zero value.
[0108] The second term is equivalent to the first one, but reflecting the incompatibility between nodes 2 and 4.
[0109] If one analyzes every possible combination that does not violate any constraint in the table of FIG. 8, one may observe that either none of the nodes are labelled as "keep", either one node among nodes 1 and 3 and one node among nodes 2 and 4 are labelled as "keep". This is enforced by the third term of the regularized constraint. In the first case (all relaxed labels set to 1)

and in the second case,

Otherwise either at least one of the two first terms has a non-zero value, either

and the third term has non-zero value.

[0110] The relaxed energy is a continuous function on the relaxed node labels. Therefore, it is possible to use any continuous optimization method to minimize it.
[0111] In a tested implementation an energy was defined that can be expressed as a sum of squared errors. As a result, a standard method may be used for solving least squares problems such as the Levenberg-Marquardt algorithm described in paper "Marquardt, D., 1963. An Algorithm for Least-Squares Estimation of Nonlinear Parameters. SIAM Journal on Applied Mathematics, 11(2), p. 431-441" (which was tested).

[0112] After the minimization of the relaxed energy, the discrete nodes' labels may be recovered from the relaxed ones. A simple way to do it may be to fix a threshold between 0 and 1. The relaxed labels above this threshold may be set to "discard" and the relaxed labels below it may be set to "keep". The threshold may be any value for example higher than 0.1 or 0.2 and/or lower than 0.9 or 0.8, such as 0.5. The minimization of the energy dispatches labels efficiently toward the extrema of the [0,1] range, such that no or few label values stand around 0.5. In other words, the algorithm discriminates efficiently between facets to be kept or facets to be discarded.
[0113] The final solid hull may in the example be composed the facets associated to the nodes labelled as "keep".
[0114] As mentioned above, an implementation of the method in line with the above example details was tested. Results are present with reference to FIGs. 9-12.
[0115] FIG. 9 shows a 3D point cloud provided at S10 and representing a building which was scanned. The 3D point cloud was obtained by photogrammetry (SfM + MVS) based on photos captured by a drone. The SFM or Structure from Motion was performed as described in paper "Schonberger, J. L., & Frahm, J. M. (2016). Structure-from-motion revisited. In Proceedings of the IEEE Conference on Computer Vision and Pattern Recognition (pp. 4104-4113)". The MVS or Multi-View Stereo was performed as described in paper "Schönberger, J. L., Zheng, E., Frahm, J. M., & Pollefeys, M. (2016, October). Pixelwise view selection for unstructured multi-view stereo. In European Conference on Computer Vision (pp. 501-518). Springer International Publishing."
[0116] FIG. 10 shows the drone (in other words the sensing device or scanning tool), which was a DJI Mavic Pro drone (registered trademark).
[0117] FIG. 11 shows an image representing the parametric surfaces outputted by a RANSAC algorithm at S20 and fitting the 3D point cloud.
[0118] FIG. 12 shows the set of facets resulting from S30 and S40 and representing a skin of the building.
[0119] As could be observed, the set of facets represented accurately the building. The mean distance of the point cloud relative to the set of facets was 0.564m. The method allowed obtaining a solid representation from a (mere) point cloud. Also, the algorithm converged in less than a minute.

- determining, among the oriented facets of the partition, a set of facets that represents a skin of the real object, the determining comprising minimizing an energy which includes:

▪ a data term that increasingly penalizes discarding facets, as a level of fit between a discarded facet and the 3D point cloud increases;

▪ a constraint term that penalizes formation of non-skin geometry by kept facets.

▪ the energy has free variables, and

8. The method of any one of claim 7, wherein the constraint term is of the type:

▪ A is the set of groups of four neighboring facets,

▪ a is a group of four neighboring facets i,

- providing a physical instance of the real object and one or more sensing devices;

- performing one or more measurements on the physical instance with the one or more sensing devices; and

- outputting the 3D point cloud based on the one or more measurements. 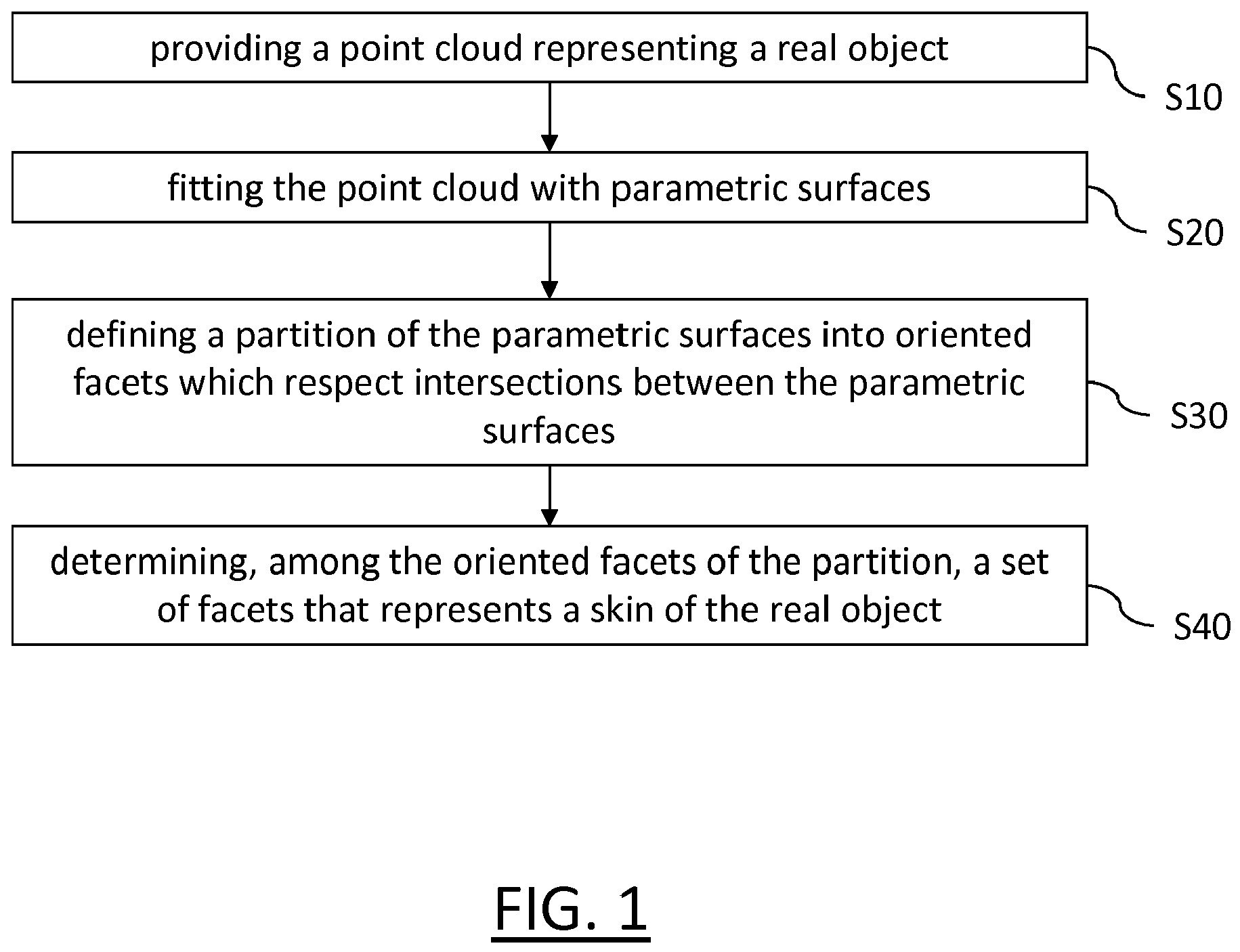 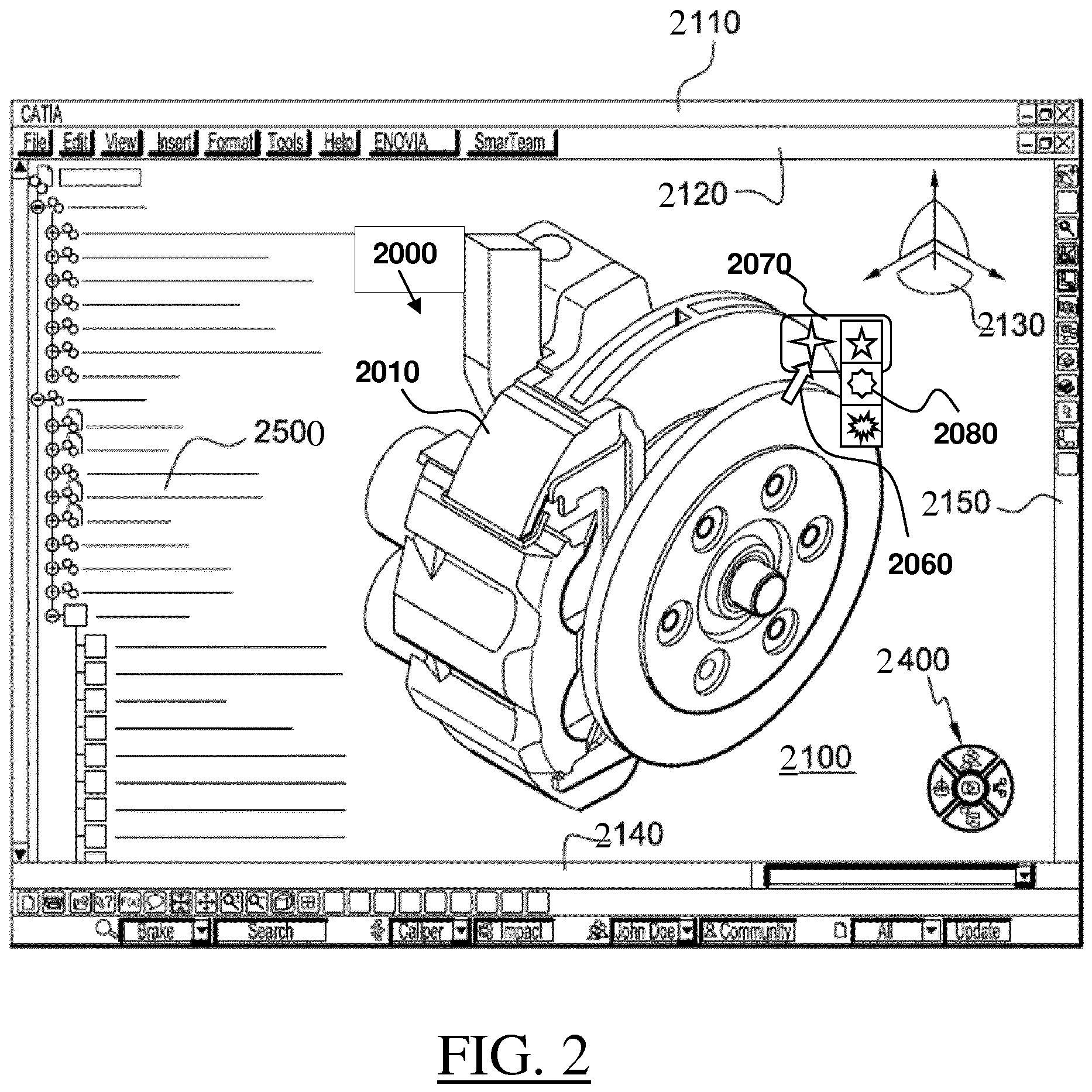 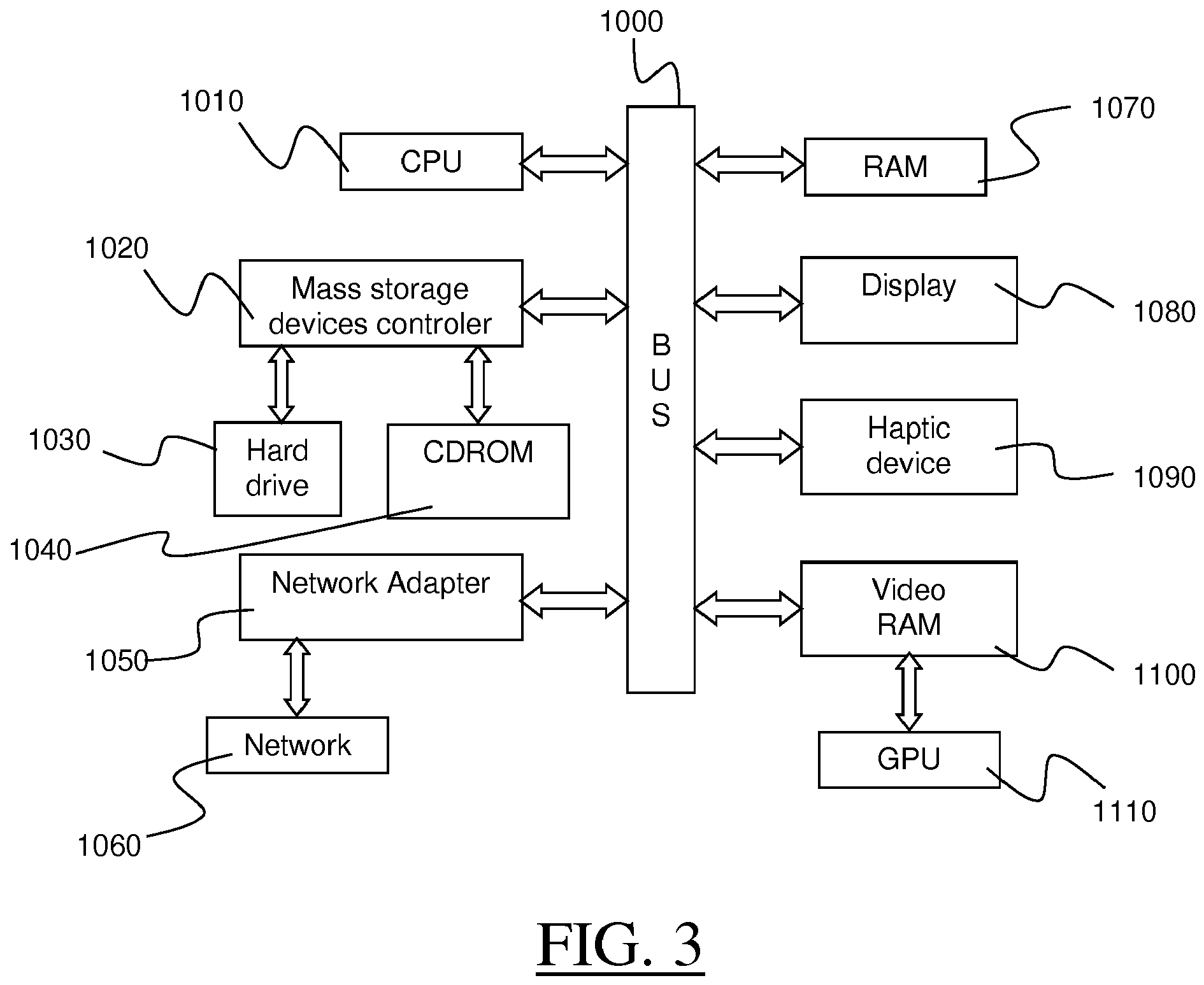 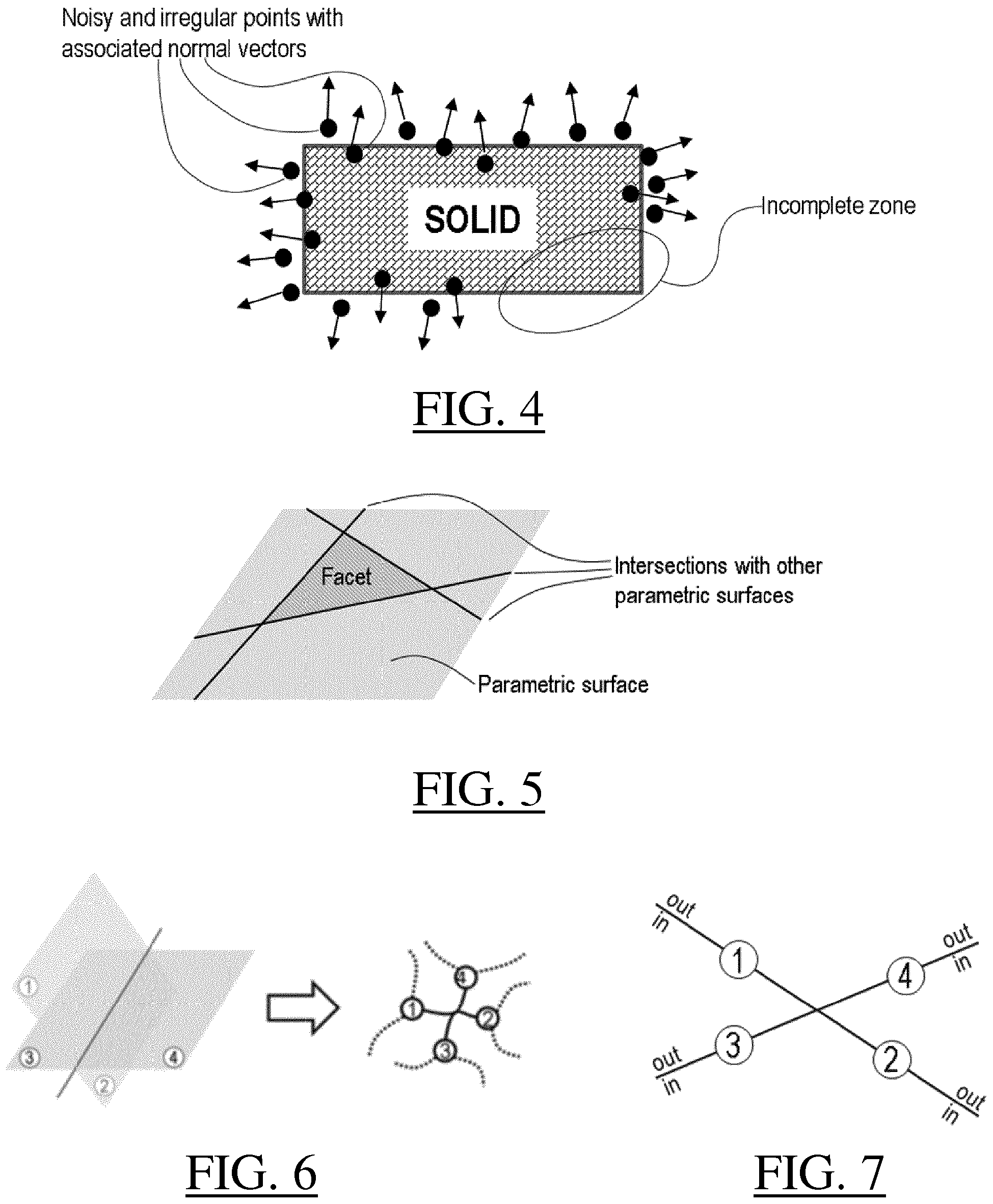 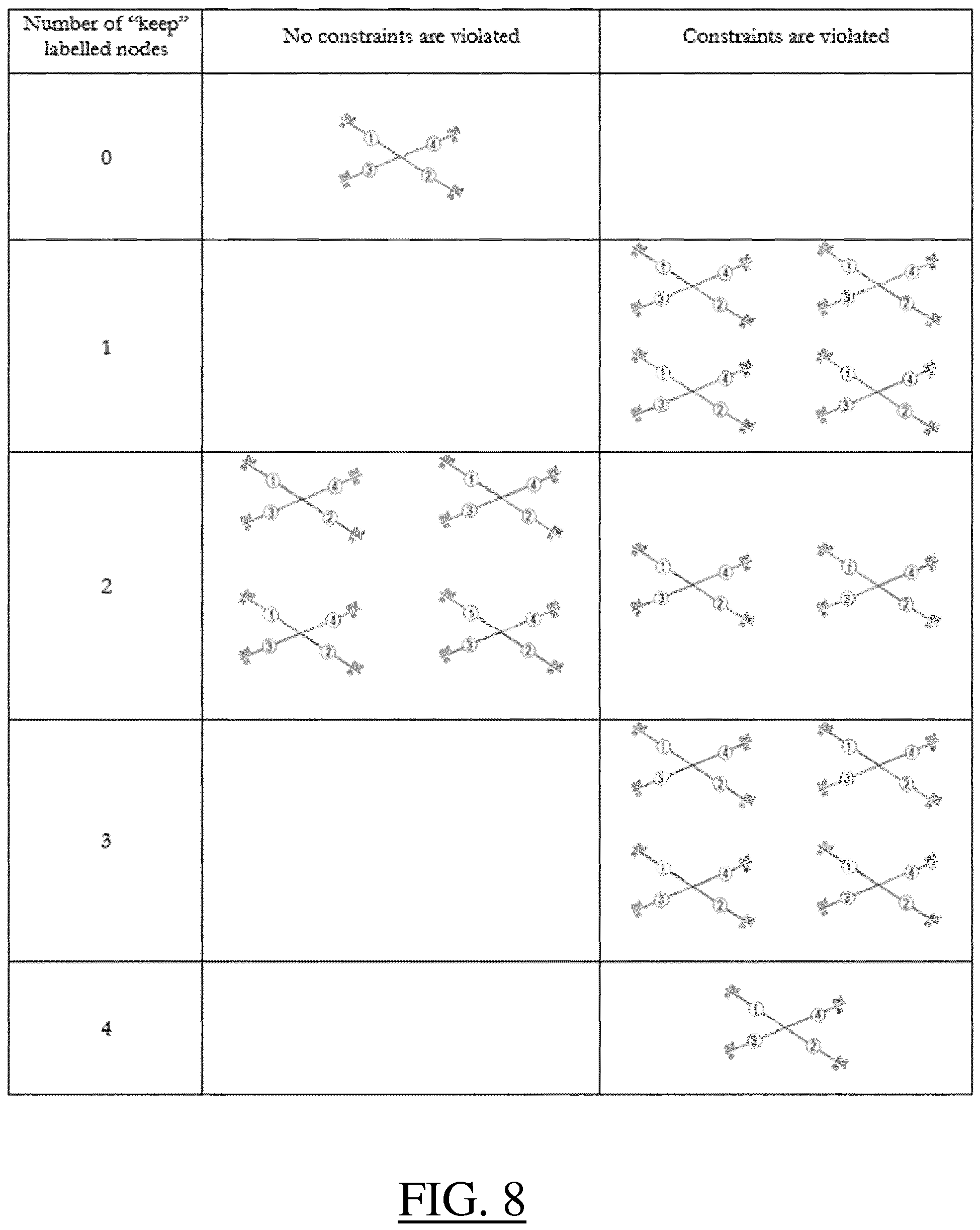 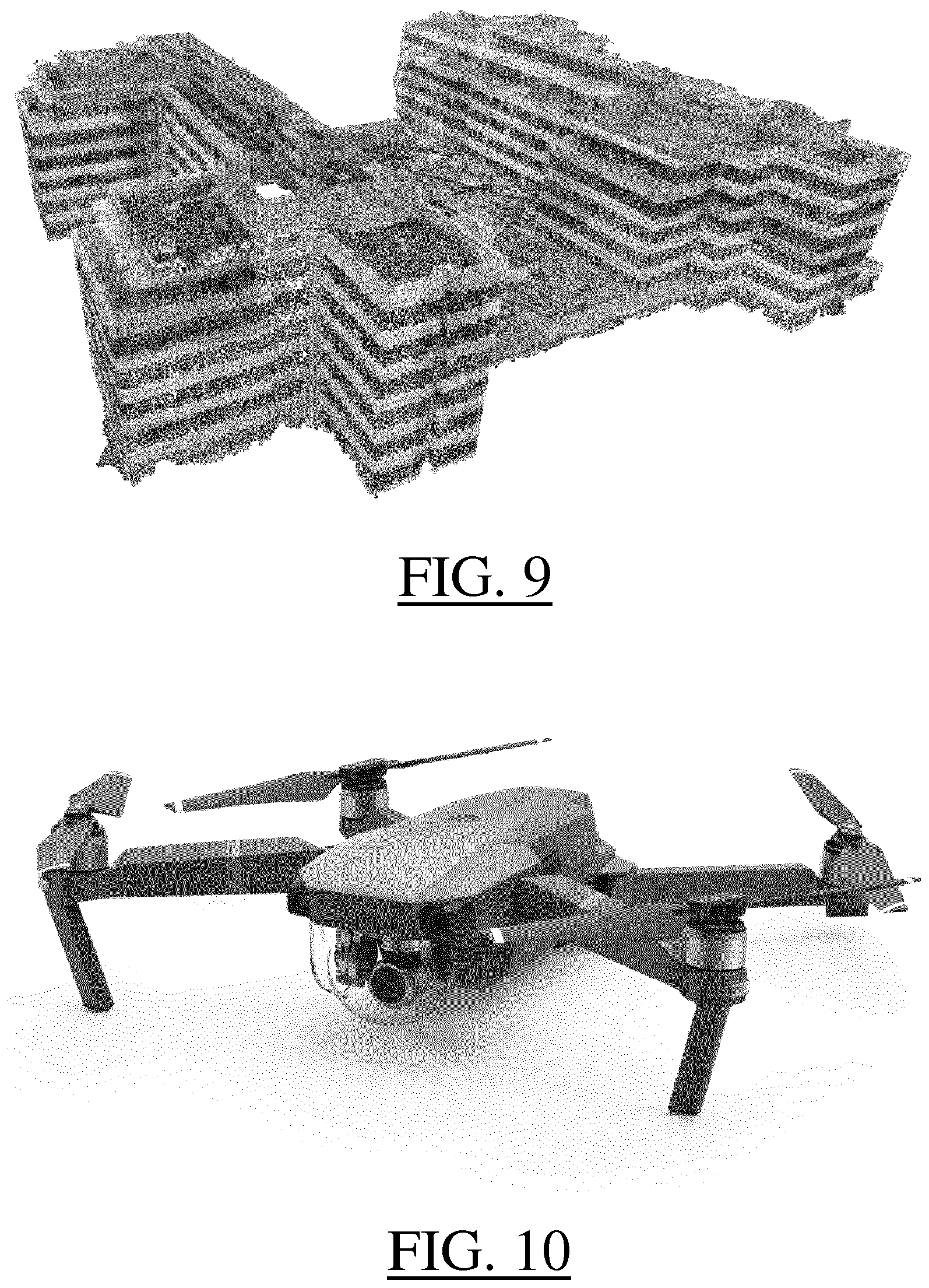 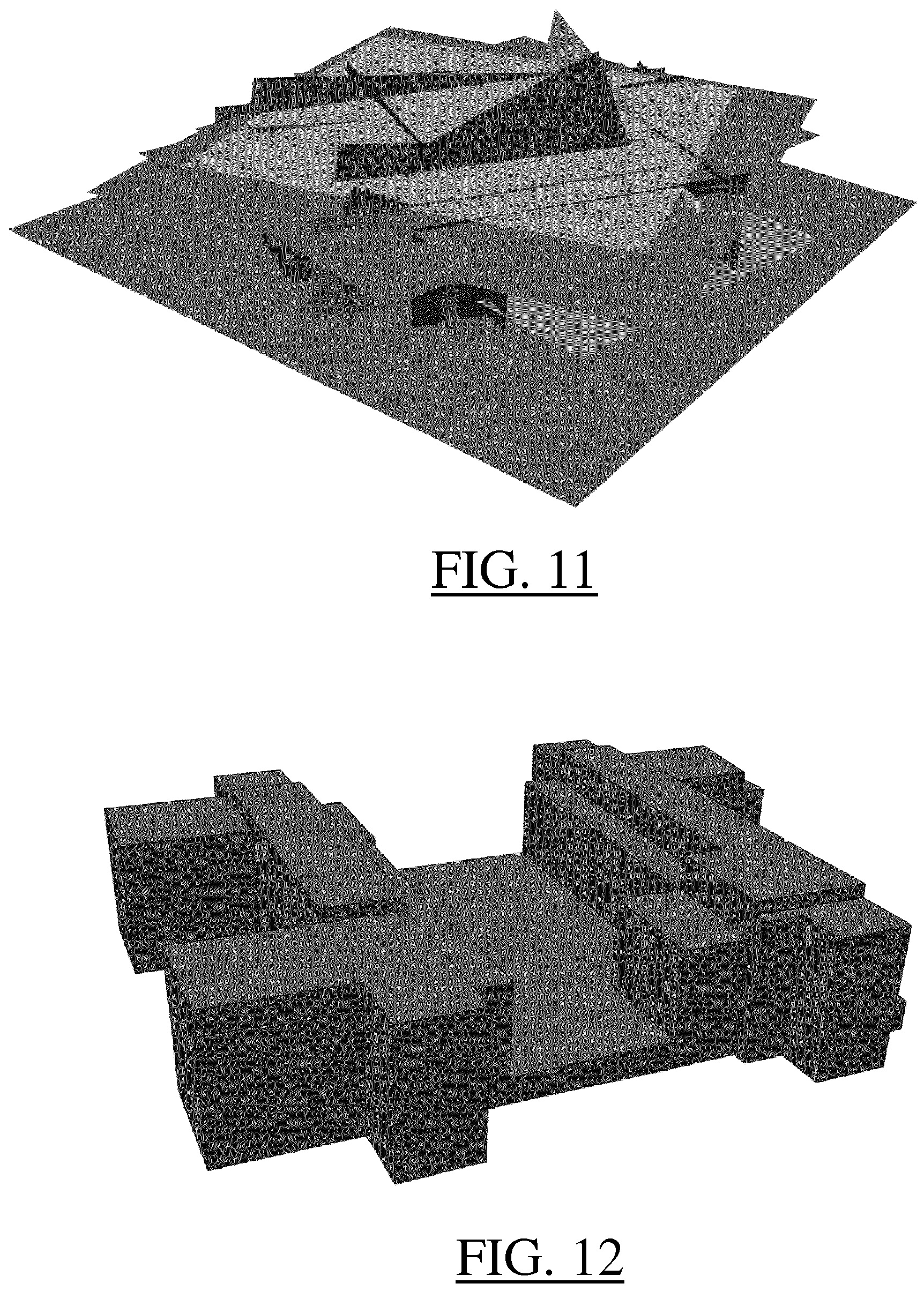 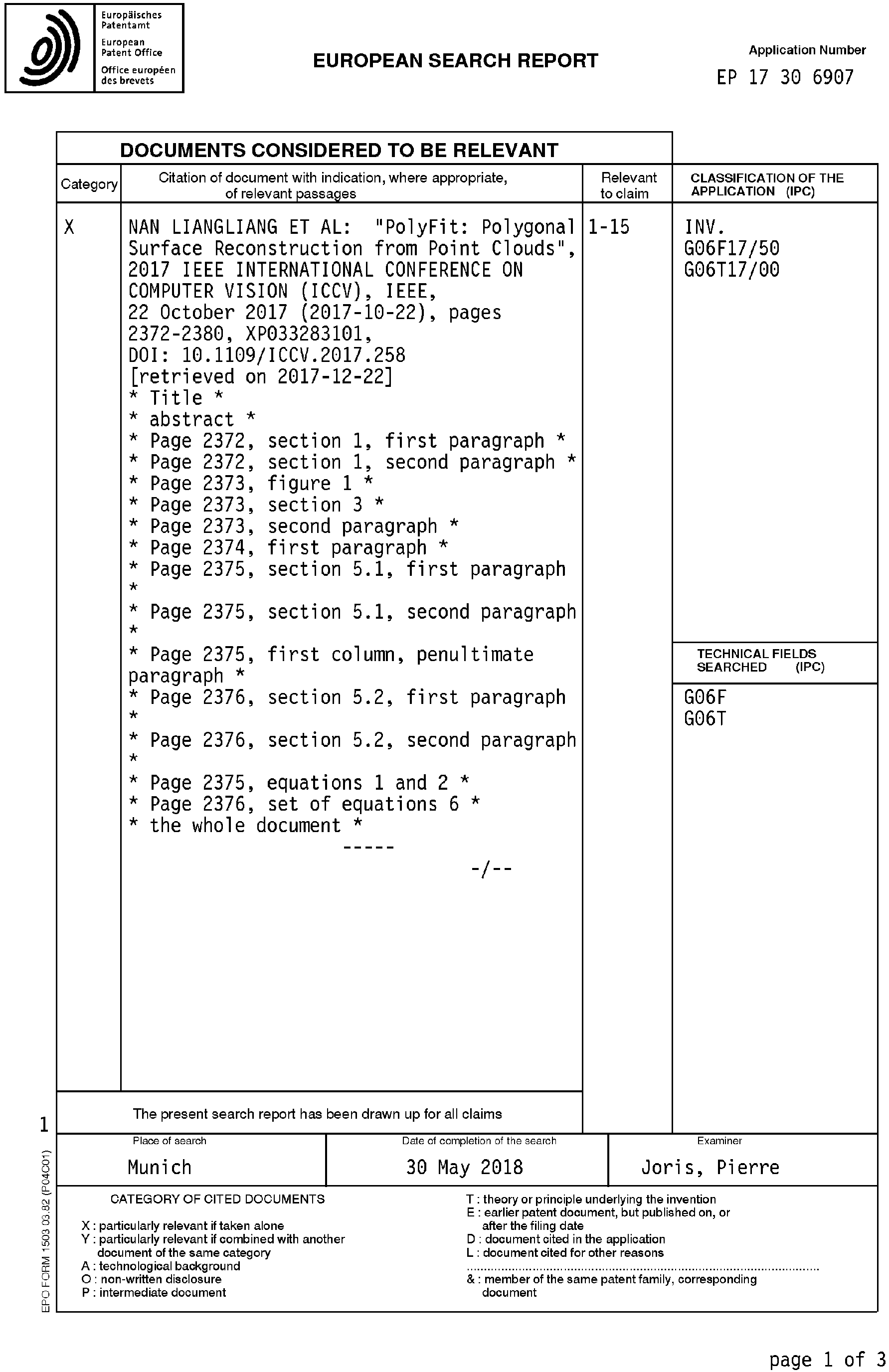 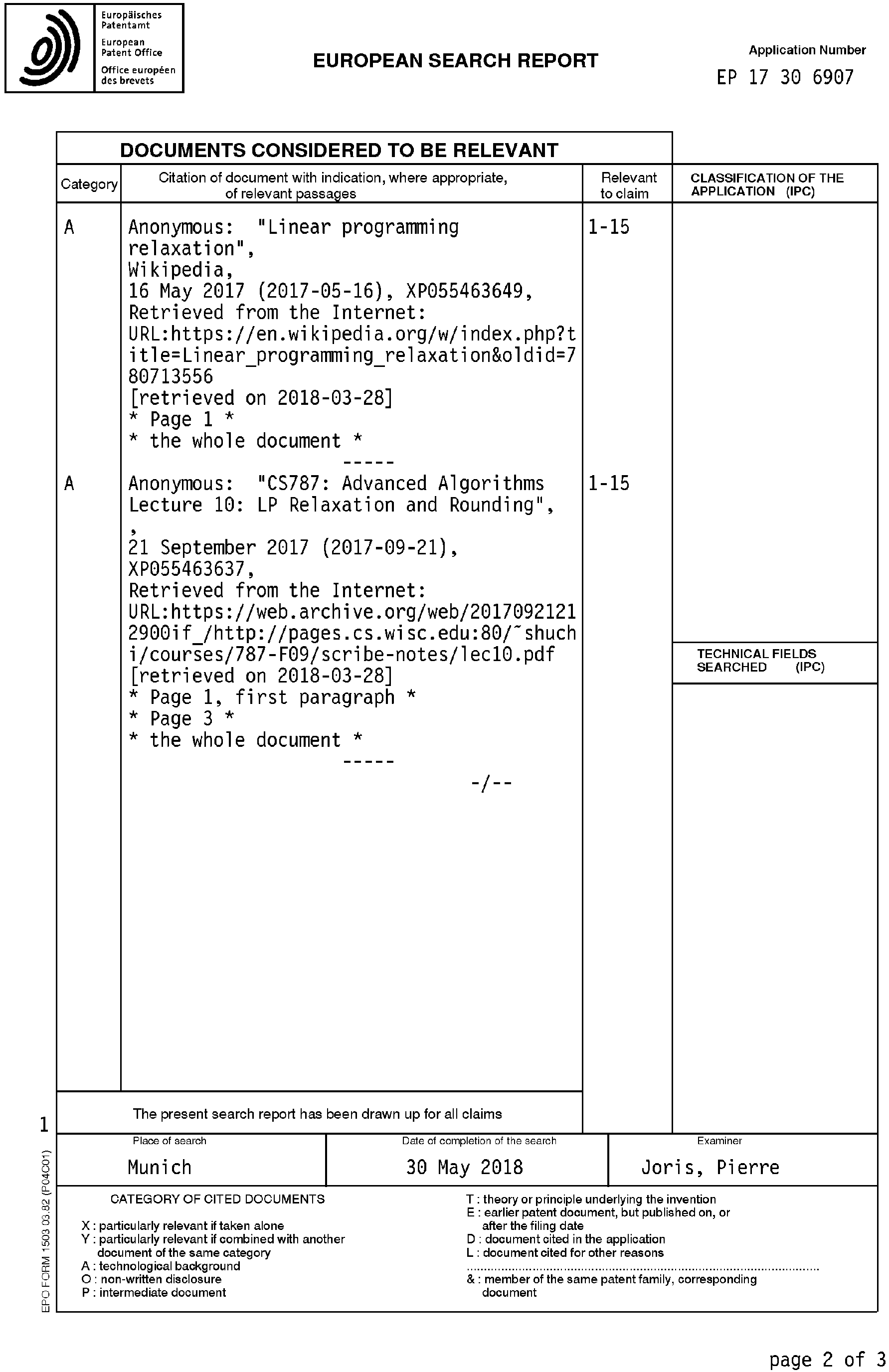 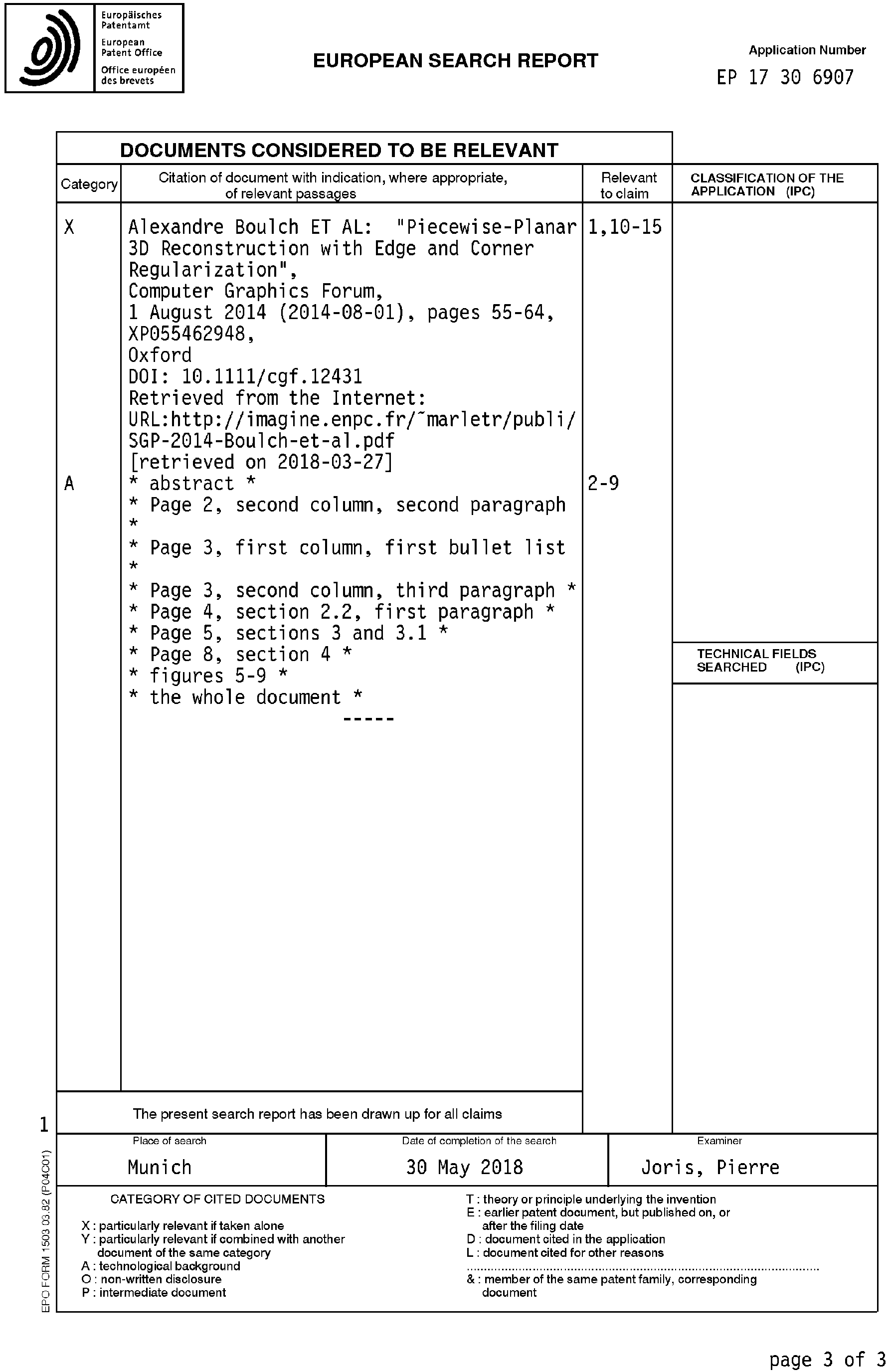