[0001] This invention relates to variators. More specifically, it relates to variators that are components of a mechanical transmission system.
[0002] In this context, a variator is a transmission component that interconnects two rotatable elements whereby, when rotating, the two elements have rotational speeds related to one another by a ratio (referred to as the "variator ratio") that can vary between a minimum variator ratio and a maximum variator ratio in a substantially stepless manner.

[0013] There are two main strategies used to control a variator: torque control and ratio control.
[0014] Torque control has no direct equivalent in multiple-speed transmissions because it relies upon a feature arising from the nature of a variator. Torque control has been described in many publications, including those parts of WO-A-2010/070341 that relate to Figures 1 to 3, and will be described here only briefly, as required to enable the present invention to be understood.
[0015] Torque control relies upon the variator having several design features:
[0016] Note that the first of these requirements means that while under torque control, tilt angle is not controlled directly by an actuator.
[0017] Each race applies a force to each rolling element that acts in a direction tangential to the working surface. Therefore, equal and opposite tangential forces must be provided by each actuator to maintain the rolling axis of the corresponding rolling element stationary along the reaction axis. If the force applied by the actuator changes, the forces acting on the carriage become imbalanced, so the rolling axes will move. The geometry of the variator is configured (using considerations that will not be discussed here) such that upon movement along the reaction axis, a couple is generated about the reaction axis that causes the carriage to rotate. This changes the tilt angle, and therefore the variator ratio, in such a way as to reduce the imbalance of forces acting on the carriage. The carriage will therefore move towards a new tilt angle at which the forces return to balance. Due to the geometry of the variator, the carriage assemblies move along their reaction axes and rotate about their tilt axes, such that they accommodate the ratio of the speeds of the input and the output races.
[0018] Ratio control bears the nearest similarity to the control of a transmission with multiple discrete, spaced ratios. In a ratio-control arrangement, the roller and carriage displacements are controlled by means which are not responsive to the reaction forces experienced by the roller carriages. The fundamental operating principle of ratio control is that a control system determines the variator ratio required to achieve a desired operating condition and operates actuators to move the carriages in such a way as to directly cause the rolling axes to tilt to the angle required to achieve the target ratio.

Aim of this invention

[0019] If ratio control is attempted by directly changing the tilt of the carnages, without other movement, one side-effect is that the contact point between the rolling elements and the working surfaces is moved radially across the working surfaces. This can only be achieved by shearing the traction fluid in the region of the contact point which, it will be recalled, is highly viscous. Therefore, the level of power that must be supplied to actuators to achieve such direct control actuation is significant and may require costly actuation mechanisms to deliver the required force and stroke. An aim of the invention is to provide an arrangement which enables control of the rolling elements using low actuation power, and hence requiring low-cost actuators.
[0020] To this end, the present invention provides a variator according to claim 1. The dependent claims define particular embodiments of the invention as defined in claim 1.
[0021] An embodiment of the invention will now be described in detail with reference to the accompanying drawings in which:

Figure 1 is a perspective view of part of a variator being an embodiment of the invention;

Figure 2 is a control assembly of the part of the variator shown in Figure 1;

Figure 3 is a top view of the part of the variator shown in Figure 1;

Figure 4 is a side elevation of the part of the variator shown in Figure 1;

Figure 7 is a perspective view of part of a variator being a third embodiment having twin cavities with a load sharing assembly for balancing reaction torque between the cavities, the third embodiment not falling within the wording of claim 1;

Figure 8 is a perspective view of a variator being a fourth embodiment having twin cavities with three rollers per cavity and a load sharing assembly for balancing reaction torque between the cavities, the fourth embodiment not falling within the wording of claim 1;

Figures 9 and 10 are an axial view and a top elevation of the variator of Figure 8;

Figure 11 is a perspective view of part of a variator being a fifth embodiment including a reaction member and a torque sensing element, the fifth embodiment not falling within the wording of claim 1; and

Figure 12 is a perspective view of the part of a variator shown in Figure 11 wherein torque is being reacted.

(b) comprises rollers to provide smooth engagement and a rolling engagement with the slot (60, 62). 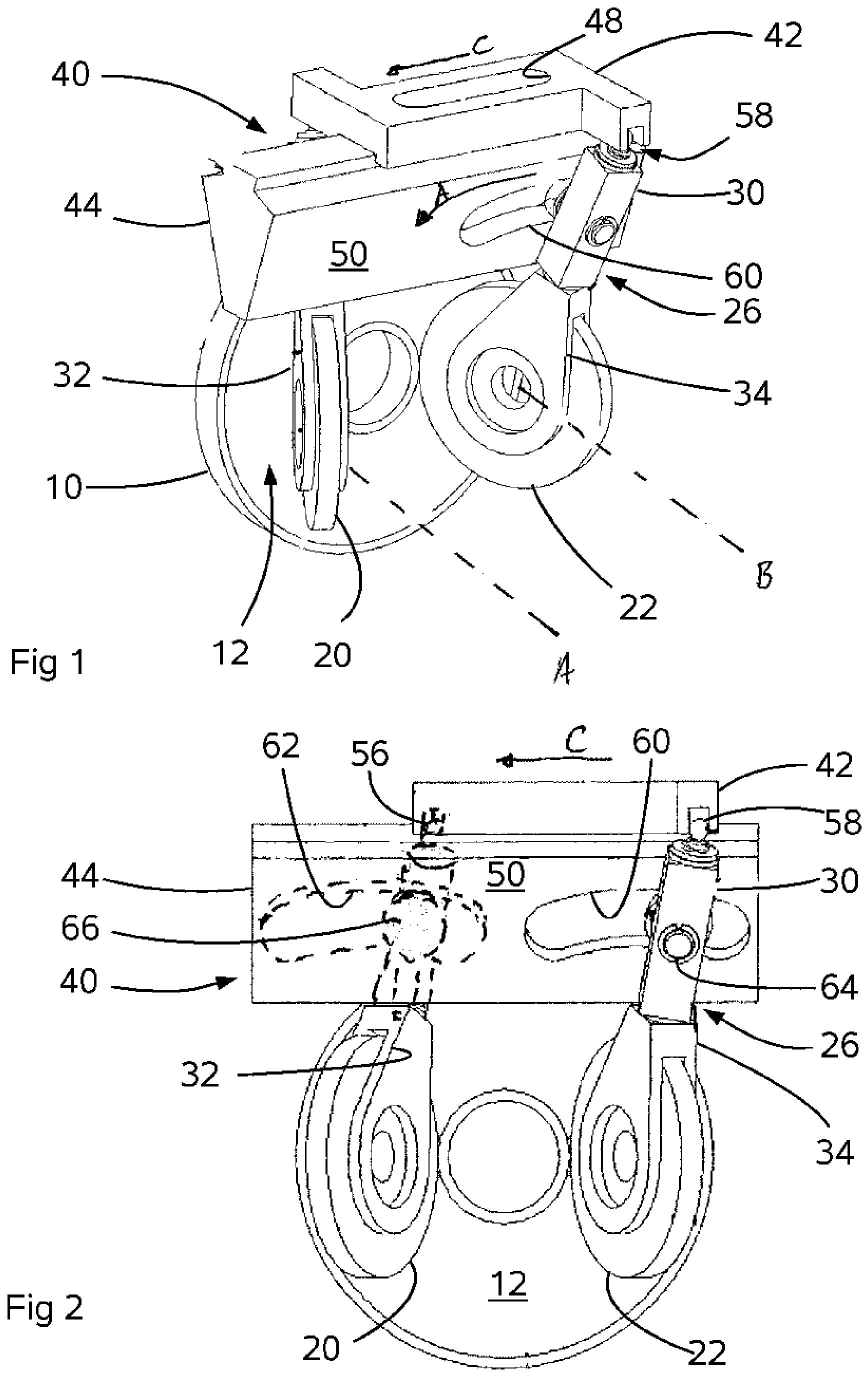 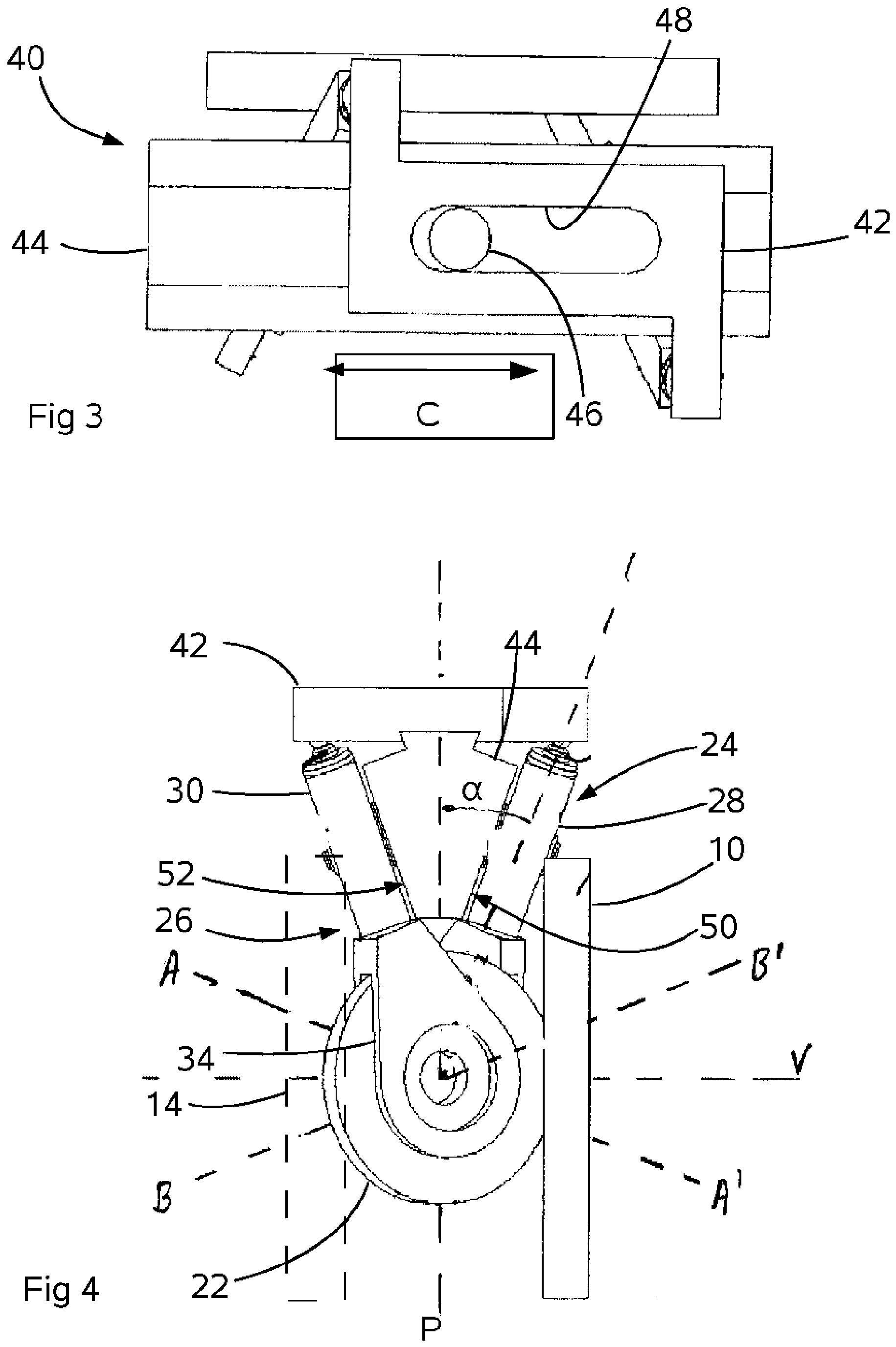 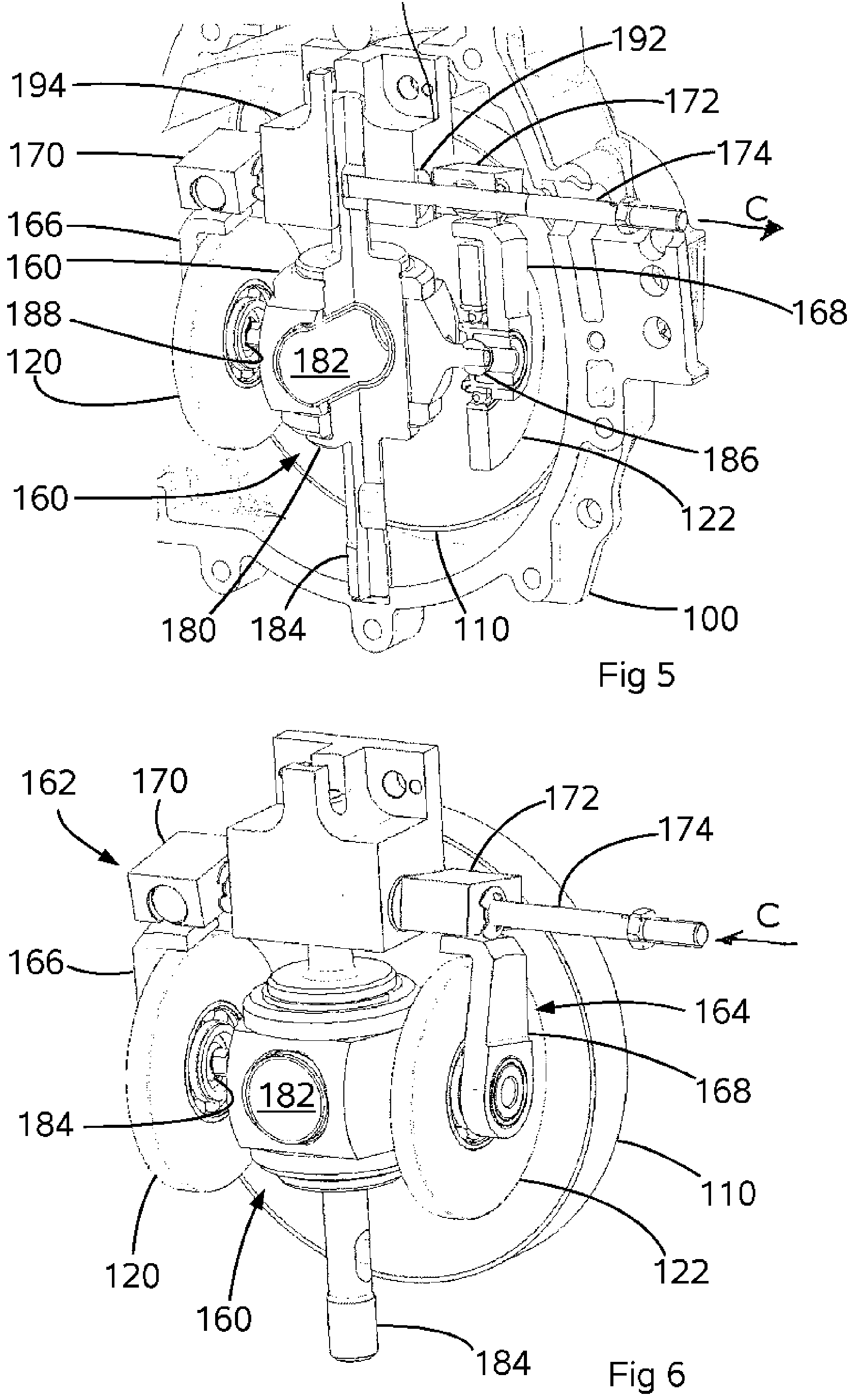 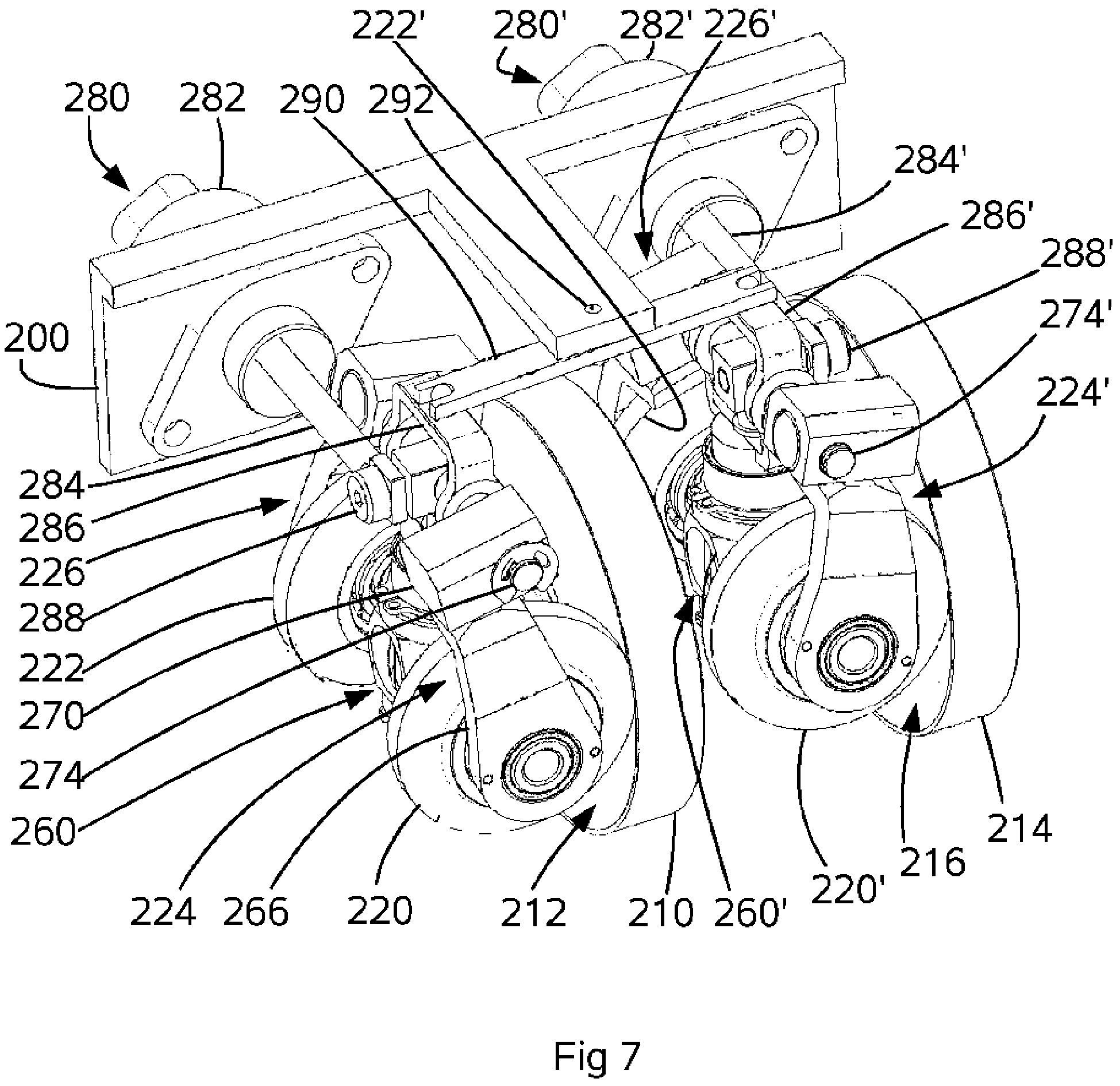 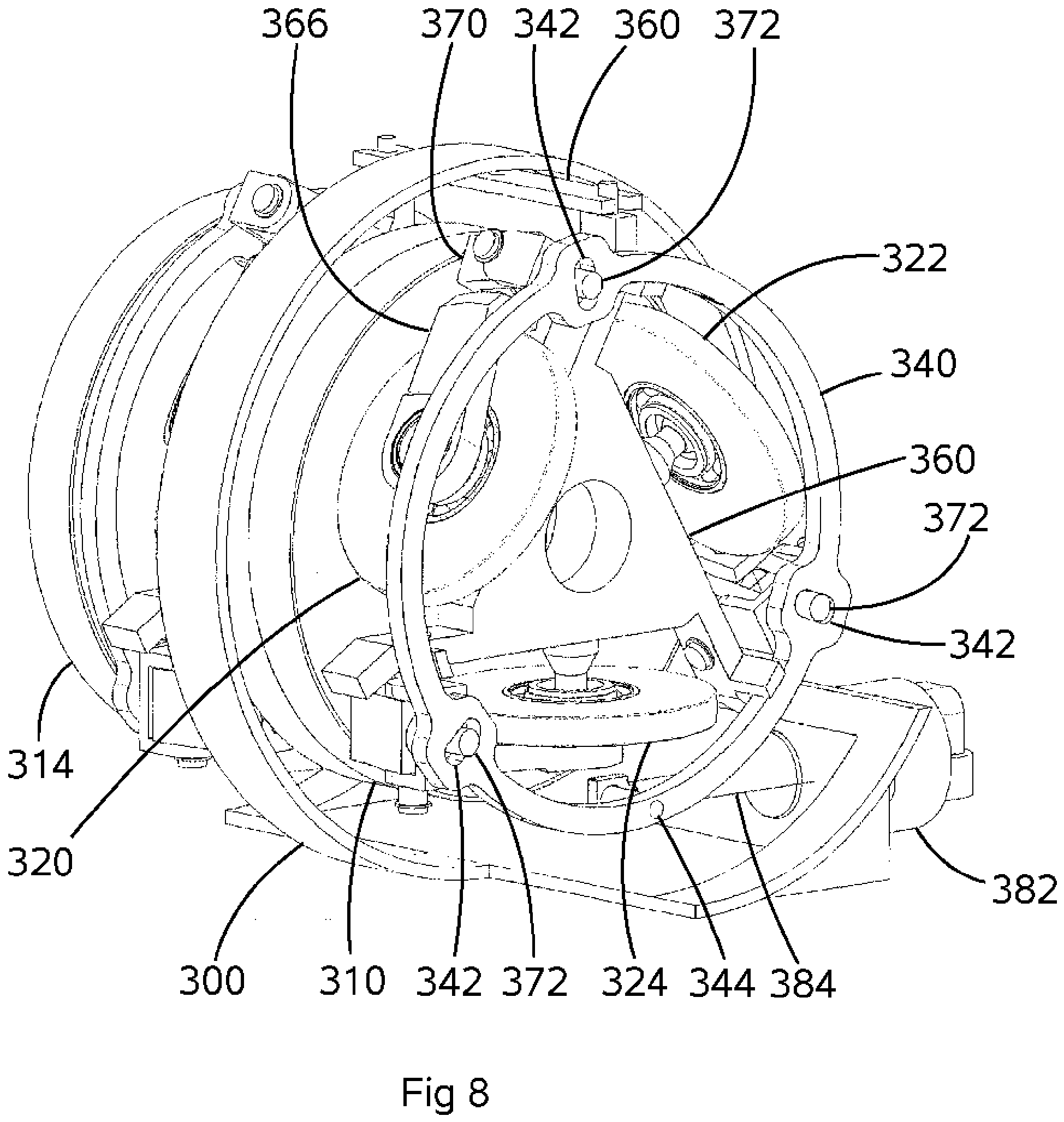 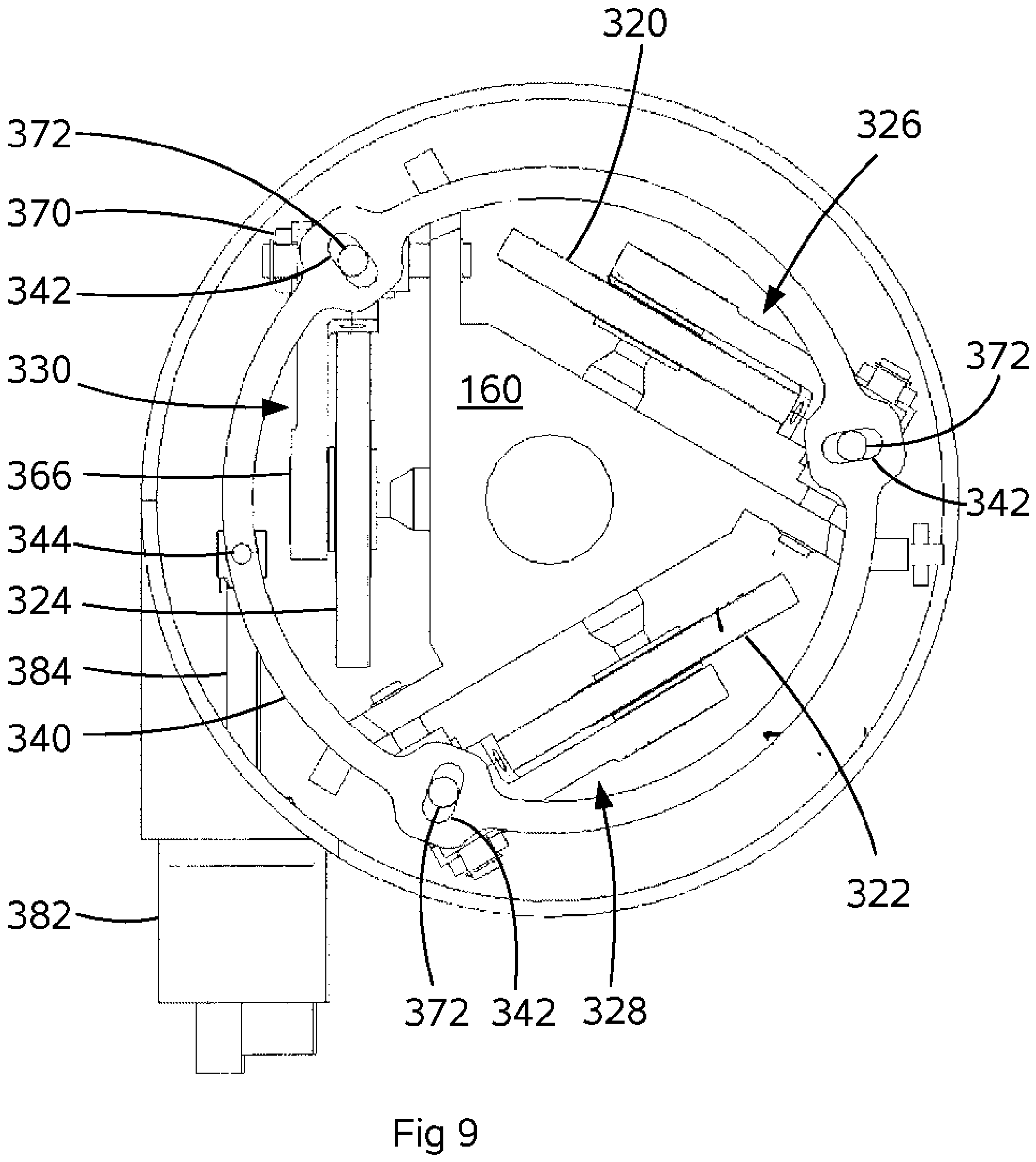 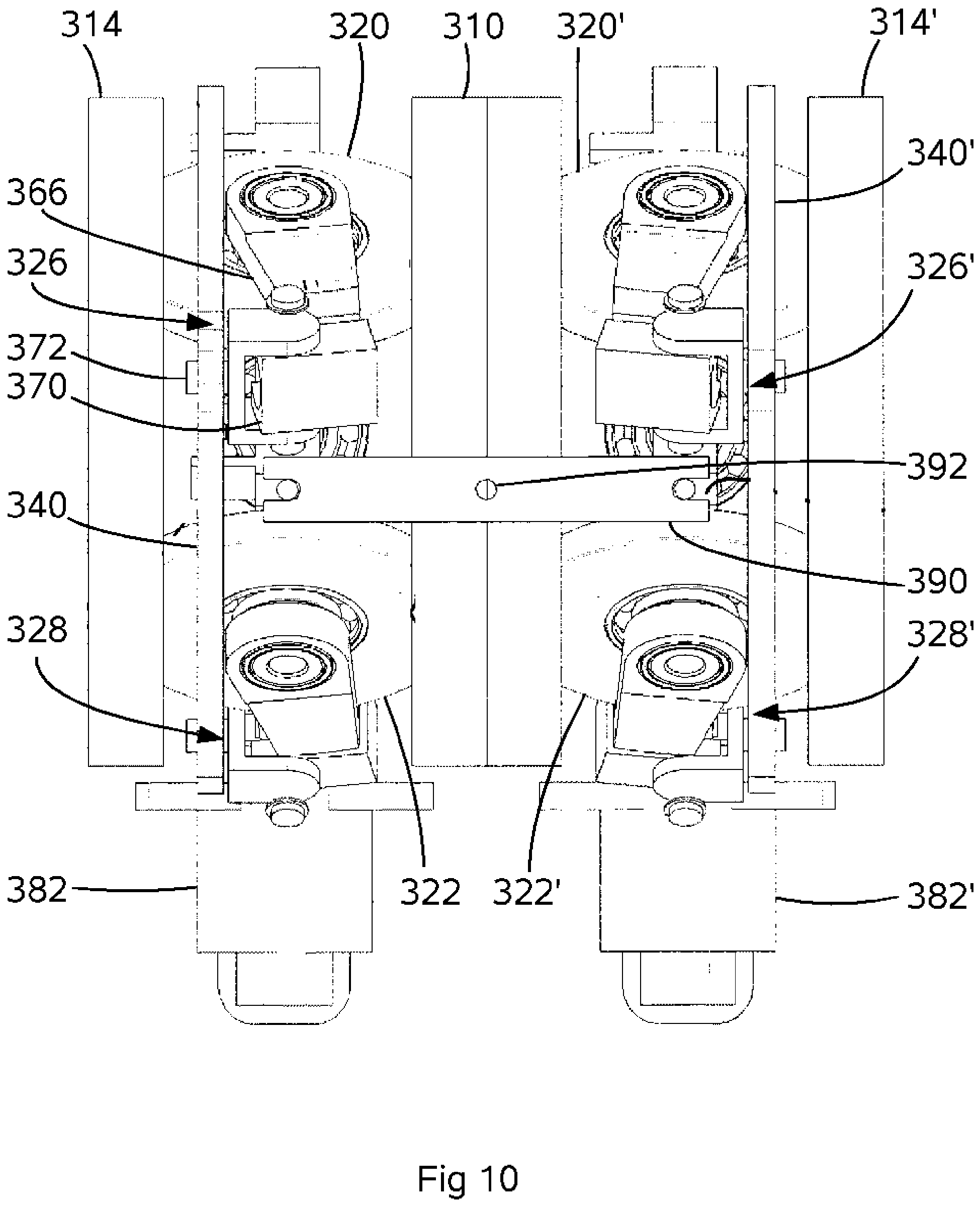 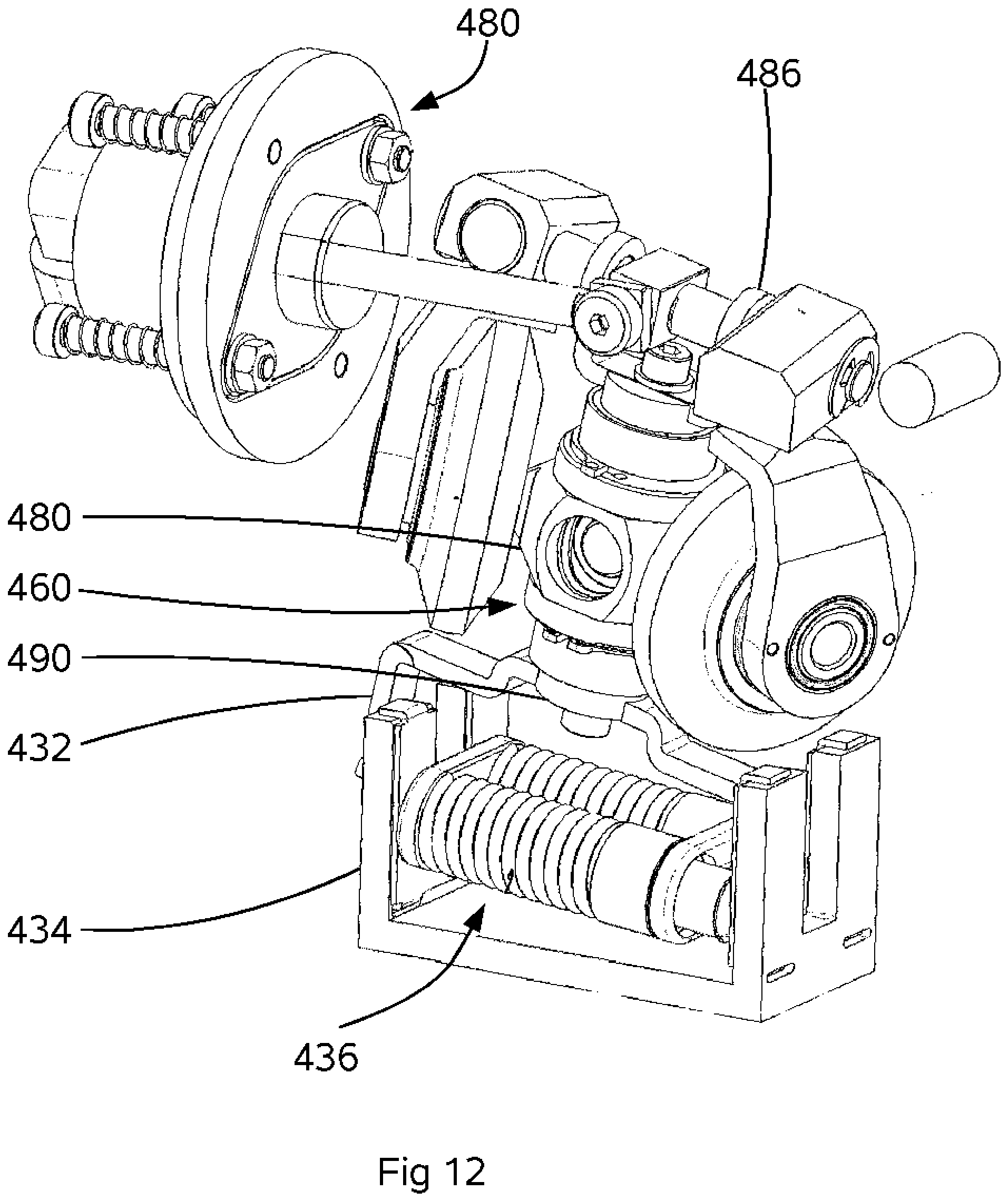