[0005] Figure 1 shows how the capacity of the cells of Example 1 vary with increasing cycle number.

[0006] Before particular examples of the present invention are described, it is to be understood that the present disclosure is not limited to the particular cell, method or material disclosed herein. It is also to be understood that the terminology used herein is used for describing particular examples only and is not intended to be limiting, as the scope of protection will be defined by the claims.
[0007] In describing and claiming the cell and method of the present invention, the following terminology will be used: the singular forms "a", "an", and "the" include plural forms unless the context clearly dictates otherwise. Thus, for example, reference to "an anode" includes reference to one or more of such elements.
[0008] According to the present invention, there is provided an anode for an electrochemical cell, said anode comprising:

wherein the polymer coating is doped with lithium ions and comprises a polyisocyanurate material,

Reaction products comprising at least two HDI molecules and still containing at least two isocyanate groups, are by contrast "oligomeric polyisocyanate" within the meaning of the invention. Representatives of such "oligomeric polyisocyanates" are, starting from the monomeric HDI, e.g. HDI-isocyanurate and HDI-biuret, which are each constructed from three monomeric HDI components: 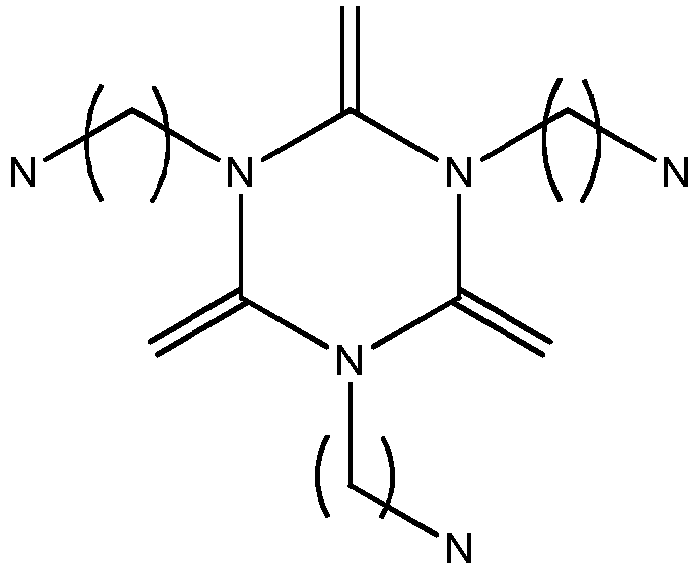 Preparation of an alkoxysilane modified polyisocyanate A

[0097] 756 g (4.5 mol) of 1,6-diisocyanatohexane (HDI) were introduced under dry nitrogen with stirring at a temperature of 80°C and 0.1 g of zinc(II) 2-ethyl-1-hexanoate as catalyst were added. Over a period of about 30 minutes, 294 g (1.5 mol) of mercaptopropyltrimethoxysilane were added dropwise, with the temperature of the mixture rising to up to 85°C owing to the exothermic reaction. The reaction mixture was stirred further at 85°C until, after about 2 hours, the NCO content had dropped to 24.0 %. The catalyst was deactivated by addition of 0.1 g of orthophosphoric acid and the unreacted monomeric HDI was removed in a thin-film evaporator at a temperature of 130°C and a pressure of 0.1 mbar. This gave 693 g of a virtually colourless, clear polyisocyanate mixture whose characteristics and composition were as follows:

Preparation of a polyether modified polyisocyanate B

[0098] 600 g (3.1 eq) of a polyisocyanate based on HDI, containing isocyanurate groups, having an NCO content of 21.7%, an average NCO-functionality of 3.5 (by GPC), a monomeric HDI content of 0.1% and a viscosity of 3000 mPas (23°C), were introduced as an initial charge at 100°C under dry nitrogen and with stirring, and 400 g (0.8 mol) of a monofunctional polyethylene oxide polyether prepared starting from methanol and having a number-average molecular weight of 500 g/mol were added over the course of 30 minutes, and the mixture was stirred further at this temperature until the NCO content of the mixture had dropped after about 2 hours to the figure of 9.6% corresponding to complete urethanization. After cooling to room temperature, the resultant colourless, clear, polyether-modified polyisocyanate mixture had the following characteristic data:

Preparation of a catalyst solution K1

[0099] 1.77 g of potassium acetate (Sigma Aldrich) were stirred for several hours together with 4.75 g of crown ether 18-Crown-6 (Merck KgaA) and 31.15 g diethylene glycol (Sigma Aldrich) at room temperature under dry nitrogen until a clear solution was obtained.

[0107] A lithium-lithium stripping-plating test was performed using 100µm thick uncoated lithium metal electrodes as a control. This test was performed by mounting two discs of the lithium electrodes in a coin cell. A polyolefin separator was used to prevent contact between the two lithium discs. Then electrolyte (1M LiOTf in TEGDME) was introduced between the discs and current corresponding to 1mA/cm2 was applied for one hour to allow transfer of lithium ion from one lithium disc to the other. After an hour the current was reversed in order to de-plate the plated lithium disc and re-plate the second lithium disc. The striping/plating voltage was measured against time.
[0108] The stripping-plating test was repeated using coated lithium electrodes. Here the 100 µm thick lithium electrodes were coated with a coating similar to that described in Example 1 above. Instead of silica, however, 5% Montmorillonite clay was incorporated into the polymer as filler.
[0109] The uncoated lithium control failed after 160 hours whereas the coated lithium was stable for over 200 hours indicating the effectiveness of the protective coating in preventing lithium dendritic growth.

1. An anode for an electrochemical cell, said anode comprising:

- an anode as claimed in any one of the preceding claims,

7. A method of forming a coating on an anode of an electrochemical cell, said method comprising the steps of: 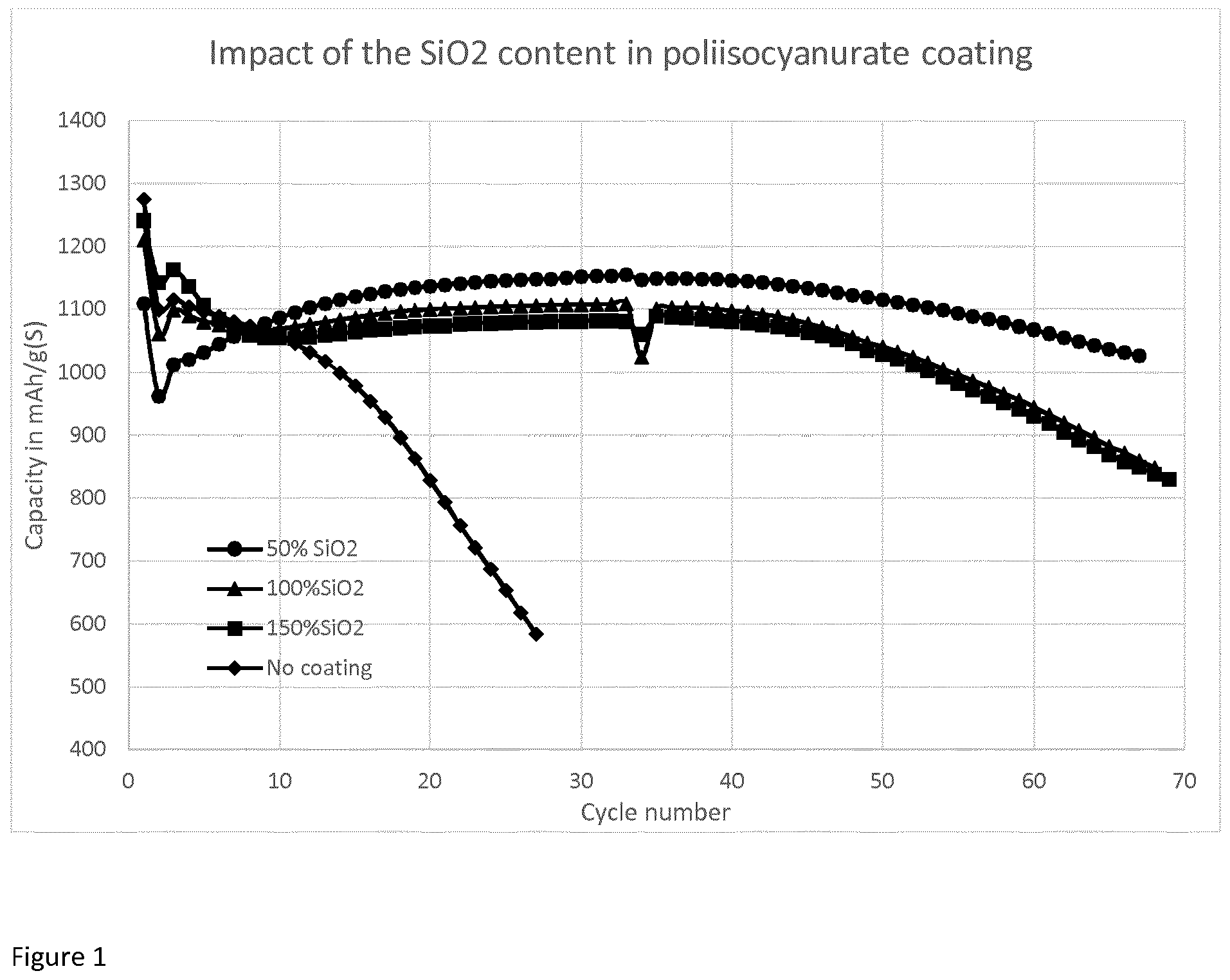