[0001] The present disclosure generally relates to a method for creating and using a revisioning database system.

[0002] The approaches described in this section are approaches that could be pursued, but not necessarily approaches that have been previously conceived or pursued. Therefore, unless otherwise indicated, it should not be assumed that any of the approaches described in this section qualify as prior art merely by virtue of their inclusion in this section.
[0003] The document US 2005/097441 discloses a distributed document version control where document permissions (access control list) define the types of actions that are authorized for each document.
[0004] Computer-based revisioning database systems store data and provide the ability to track changes in database objects and examine a history of what changes were made, which user made the changes, and when the changes were made. Generally, all users of the revisioning database have the same view of the data. However, conventional revisioning database systems are poorly suited to the needs of certain users, such as intelligence analysts. Intelligence database systems typically store highly sensitive and confidential data that is distributed on a "need to know" basis. Security considerations in intelligence analysis impose restrictions on who can access or receive particular kinds of views of data, but revisioning databases do not typically implement controls on access to views. Intelligence analysts often work on multiple discrete investigations that may draw data from the same centralized revisioning database, but one analyst is not typically allowed to view every investigation, or the data associated with every investigation, or changes made by another analyst, even if the same data is associated with that analyst's own investigations.
[0005] Further, distribution of copies of intelligence data is typically restricted, but in conventional revisioning database systems users are permitted to maintain a local mirror copy of at least a portion of the data. The use of a local mirror is not acceptable to the intelligence community. Thus, there is a need for improved ways to distribute selected views of data
[0006] Further, changes in intelligence data may be associated with reasons for the changes that are useful to track and display in connection with a change history of the revisioning database. However, conventional revisioning databases do not allow a user to associate change reasons or other annotations with a change history from the database.

[0013] The present invention is illustrated by way of example, and not by way of limitation, in the figures of the accompanying drawings and in which like reference numerals refer to similar elements and in which:

FIG. 4A illustrates displaying data from a revisioning database based on realms and rules;

FIG. 4B illustrates operation of a revisioning database system using a publish-subscribe model to provide a virtual private database;

FIG. 4C illustrates determining whether a specified object is part of a view for a particular user and realm;

FIG. 7 illustrates a computer system with which an embodiment may be implemented.

[0053] In an embodiment, application logic 112 implements a summary view function in cooperation with wizard 120. In an embodiment, a Summary View interface enables an analyst to share an investigation, present an investigation to a team leader, or save the investigation for future reference. From the Summary View screen, a user can create a customized report by adding a title and description only for the investigation as a whole and for each individual step. The user can choose both which steps to include or exclude and a format to export the investigation. Exported investigations also automatically adapt to the user's clearance level. Thus, an effect of the approach herein is that a user can share results with anyone without having to worry about security issues.
[0054] Using revisioning database 108, application logic 112 saves every action performed by an analyst on database information. In an embodiment, records of such actions can be accessed by a History Window interface (section III herein) and the Summary View interface. The steps of the investigation displayed in the Summary View screen are equivalent to those that are seen in a Temporal view of the History Window as further discussed below. That is, the steps represent all the actions that a user has taken in the investigation, including branches, displayed in the order in which they were performed. Steps are displayed as slides within a graphical user interface. Slides not desired for export can be withheld from the report. Application logic 112 also automatically includes titles and brief descriptions of the action represented by each slide, saving users from the tedious task of entering such information manually. However, a user can edit the provided text. In an embodiment, the final, exported product is a professional presentation in any of several file formats.
[0055] For purposes of illustrating an example, assume that a user has successfully completed an investigation and has been asked to present the user's findings to the rest of a team. In an embodiment, application logic 112 exposes functions of export module 114, publish-subscribe module 118, and other functions described herein in a graphical user interface that is generated and provided to user terminal 106 and to host computers of intelligence analysts 102, 104. FIG. 5 illustrates an example top-level graphical user interface display. Screen display 502 comprises a plurality of icons 504 configured to select functions of application logic 112, including a Summary View icon 506 configured to select the Summary View described further herein. A workspace 510 displays one or more object icons 512 that identify persons, places, things, or events that are the subject of an intelligence investigation and that represent data stored in revisioning database 108. In an embodiment, object icons 512 are displayed in a spatially separated topology to facilitate creating links and associations between persons, places, things, and events involved in an investigation. A history display 508 comprises an ordered plurality of slides 508A, 508C, 508N, etc., that represent thumbnail views of past arrangements of the workspace 510. Thus, viewing the history display 508 indicates how the appearance of workspace 510 has changed over time and enables a user to return to a previous state of workspace 510 by selecting a slide from within the history display 508.
[0056] When the Summary View icon 506 is selected, in response, application logic generates and provides to user terminal 106 an updated GUI display that includes a summary view. FIG. 6 illustrates an example Summary View display. An investigation overview pane 802 comprises a title input field 604 and a description input field 606. A history slides panel 608 displays thumbnail images 610 of history slides that are candidates to appear in an exported report of an investigation. The history slides panel 608 comprises a summary of steps that occurred in an investigation. Each of the thumbnail images 610 is marked with a include symbol or exclude symbol indicating whether the associated history slide will appear in the report. In an embodiment, the include symbol is "+" and the exclude symbol is "X". In general, using the Summary View of FIG. 6, a user enters a title and description for the investigation, chooses the most relevant steps for the report with history slides panel 608, and selects a preferred export format using export pane 618. Selecting an export button 620 causes application logic to generate a presentation or report in the specified format.
[0057] Upon displaying the history slides panel 608, a user may select a particular step in an investigation. In response, in a Preview panel 612, the application logic 112 displays a snapshot 614 of the selected step, a title 615, and a description 616 of the selected step. FIG. 7 is an enlarged view of the Preview panel. Both the description 616 and the title 615 can be editing by selecting the appropriate box, making the desired changes, and selecting a "Save Changes" button 702. In an embodiment, a user can select a specific step or thumbnail 610 in the History Slides panel and can change the include symbol or exclude symbol to signal whether to include the associated slide in your report.
[0058] The user may enter a title in title input field 604 and a description in description input field 606. In an embodiment, a user may select an export format from export panel 618 using a pull-down menu or other graphical user interface widget, and may complete an export operation by selecting an "Export Investigation" button 620. In response, application logic 112 automatically opens the exported investigation in the selected format for viewing and sharing.

creating and storing, in a revisioning database, one or more data objects;

wherein a first plurality of the data objects is associated with a base realm representing data shared across all users of the database;

3. A method as recited in claim 2, wherein the access metadata is a classification level of the data.

5. A method as recited in any preceding claim, wherein the second user is further associated with the base realm.

6. A method as recited in any preceding claim, wherein the revisioning database comprises an object table comprising:

a plurality of rows storing metadata relating to successive versions of each data object; and

a plurality of columns identifying, for each data object, a realm associated with the data object, a unique object identifier, a label, a version, and a previous version.

7. A method as recited in claim 6, further comprising asynchronously receiving, from different users, a plurality of changes to the particular data object and, in response thereto, creating a new row in the in the object table for each of the changes. 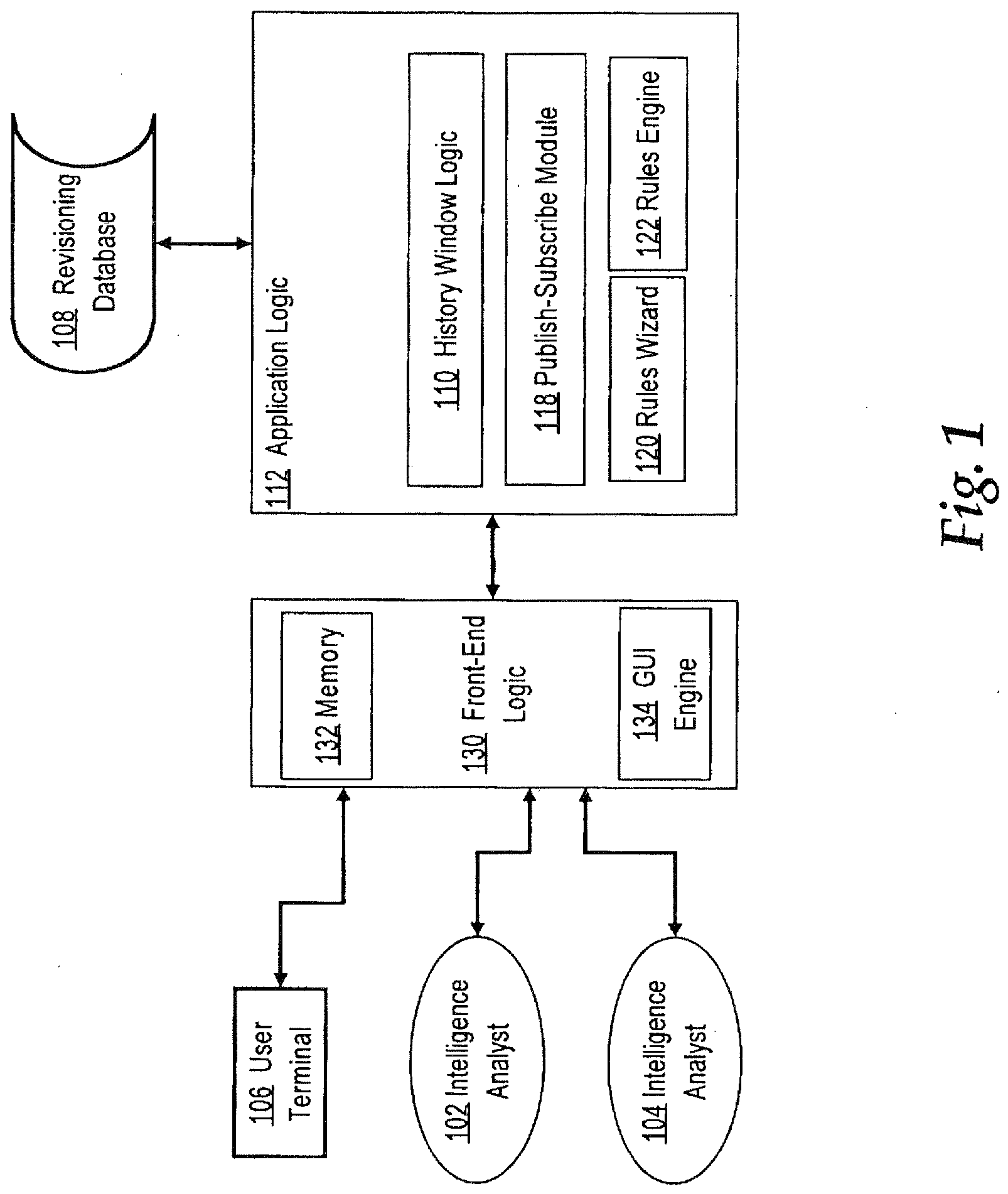 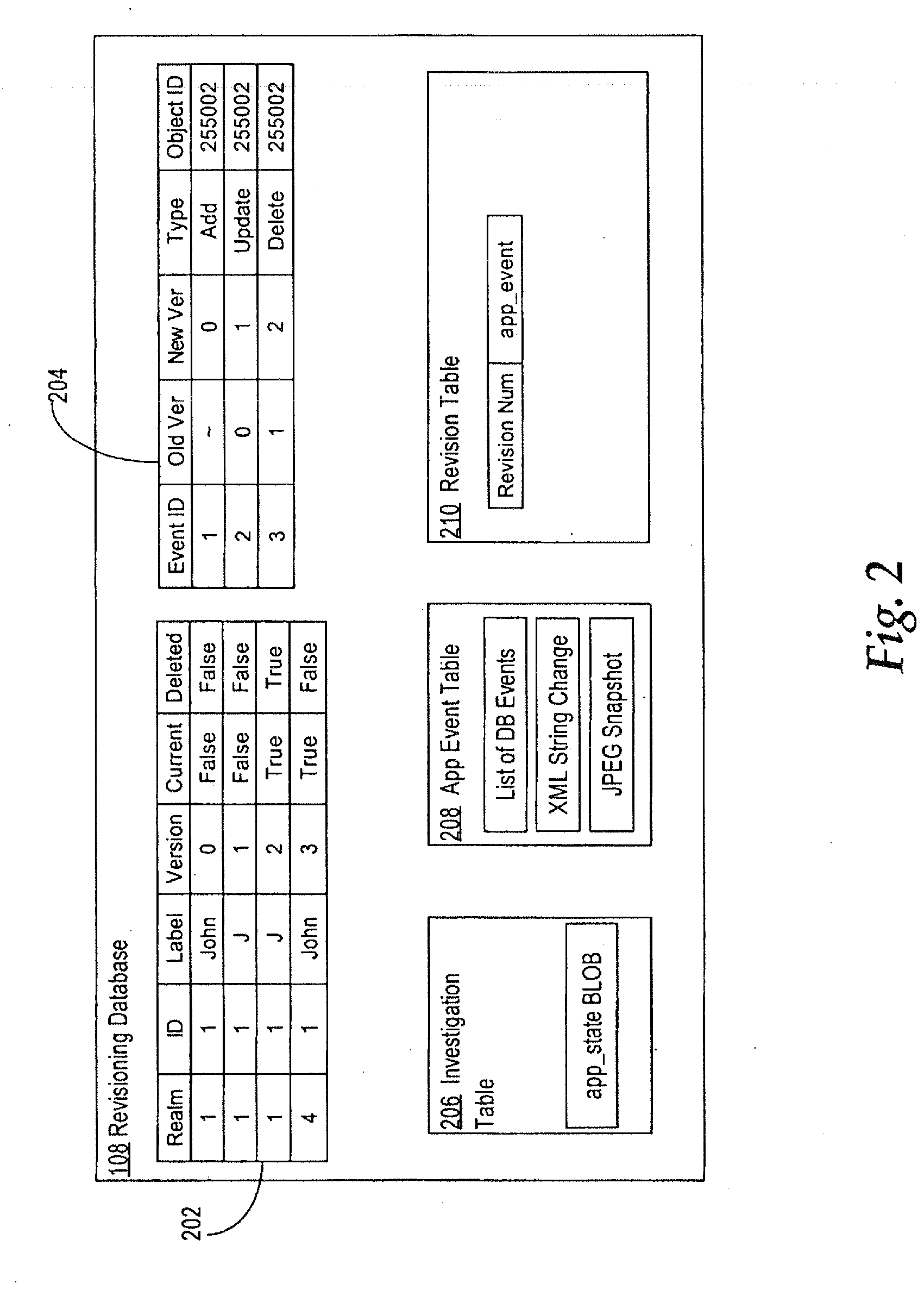 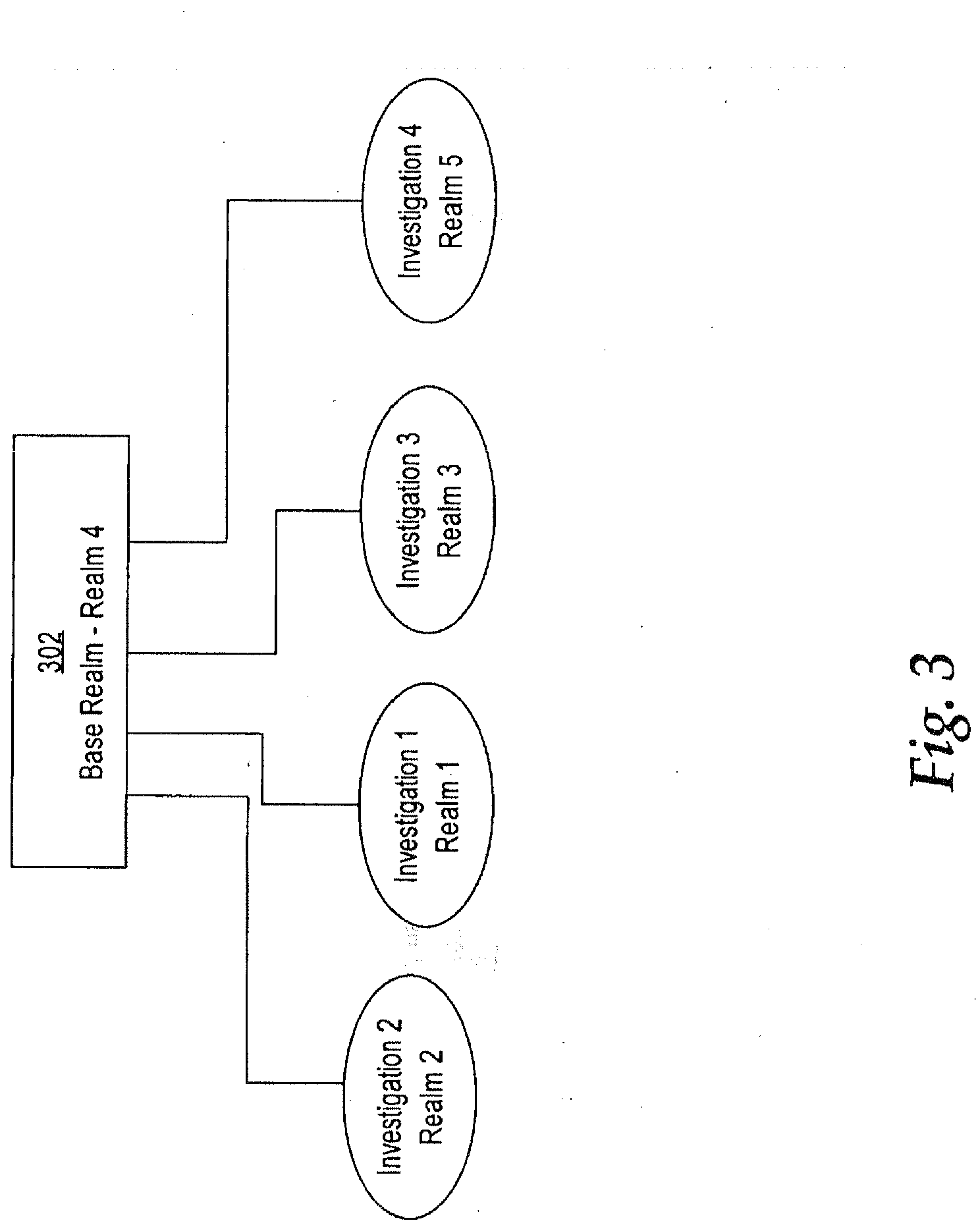 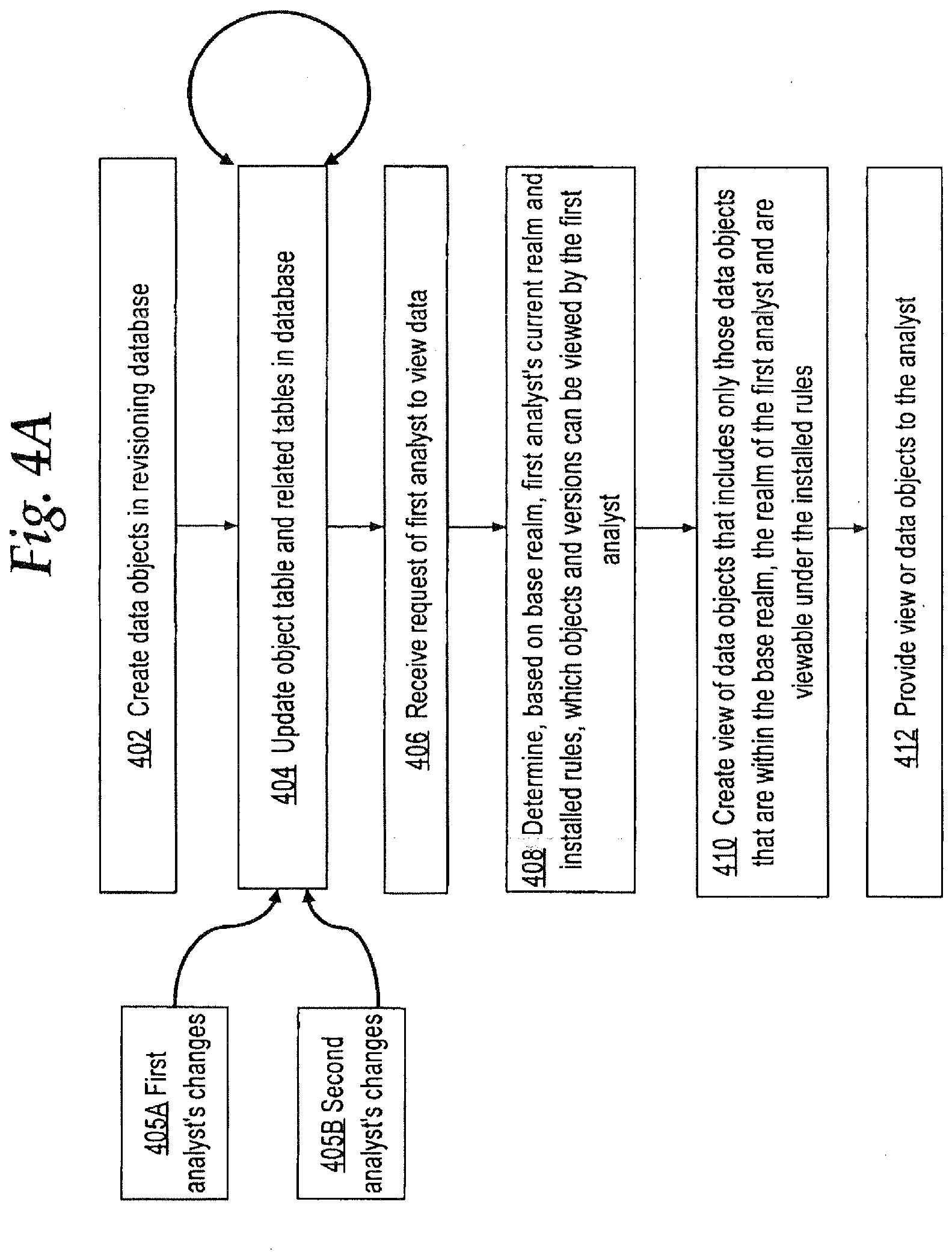 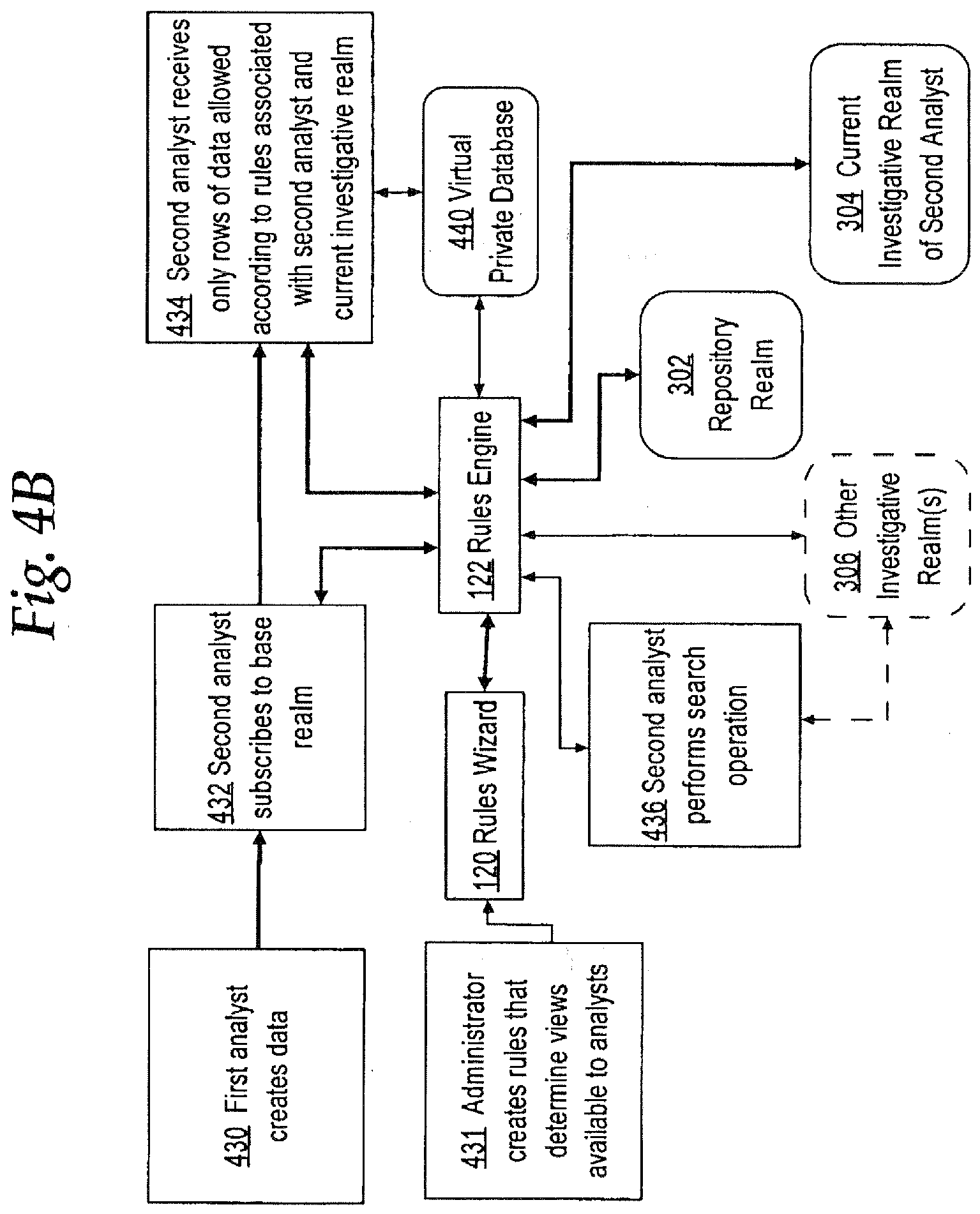 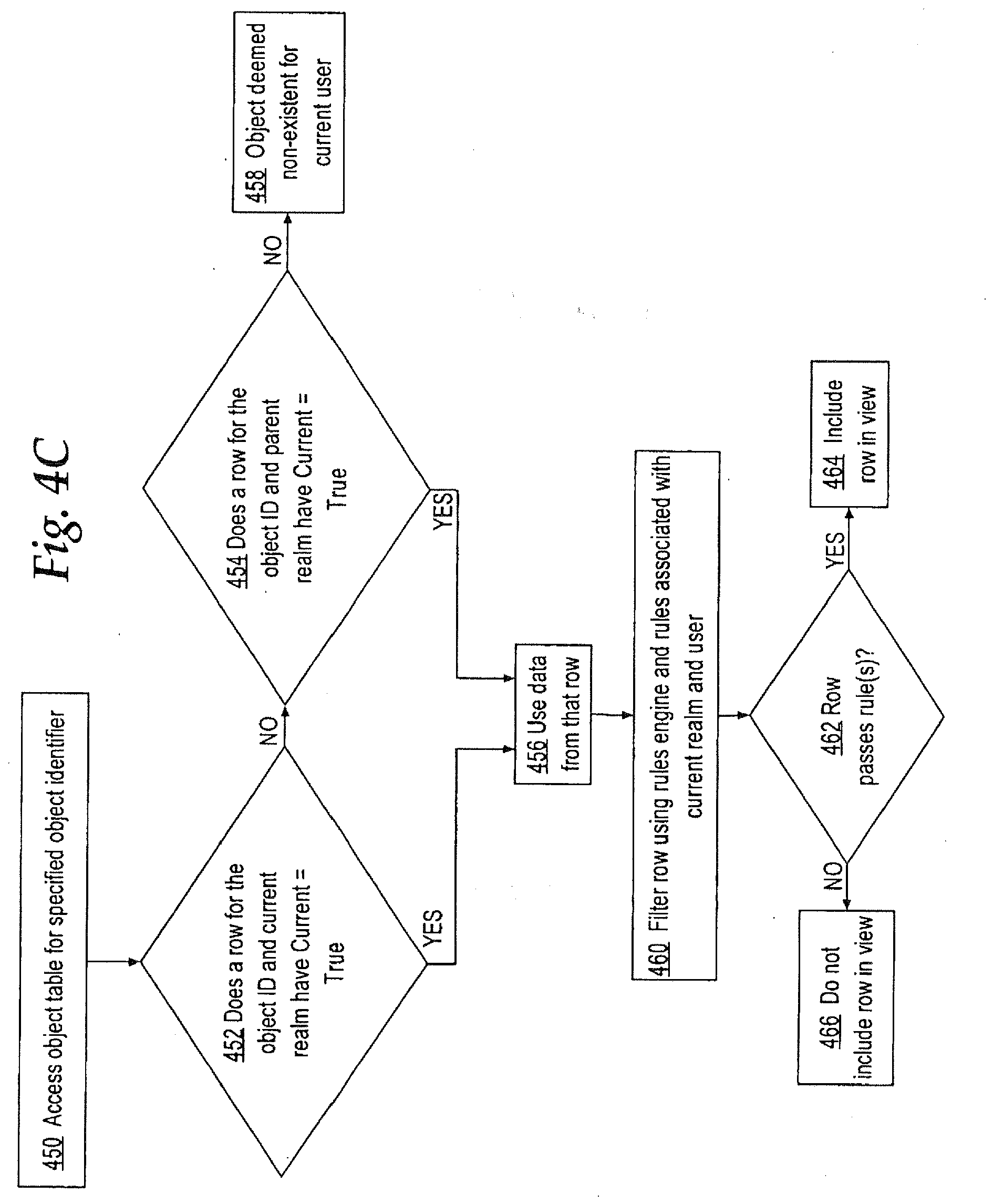 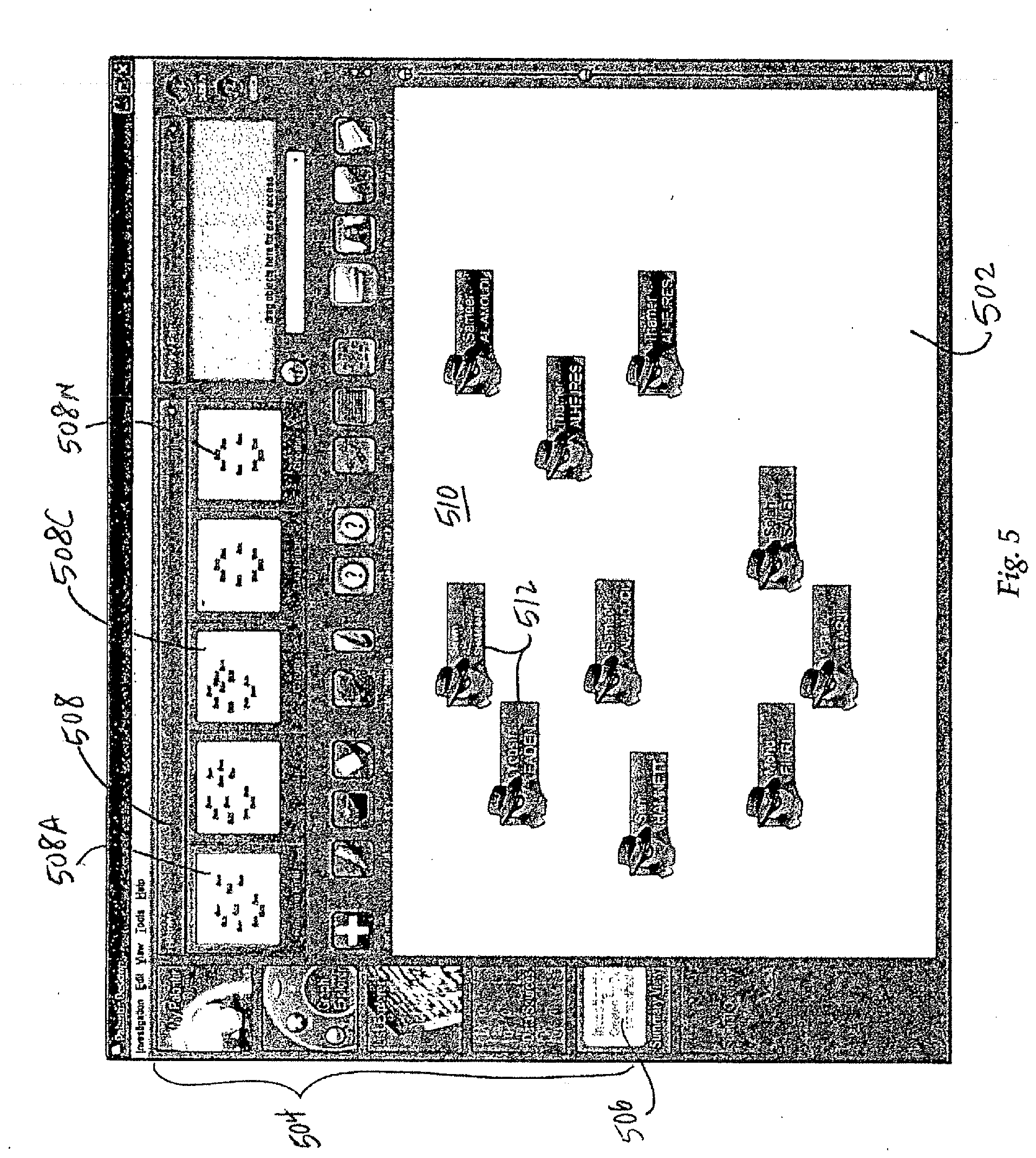 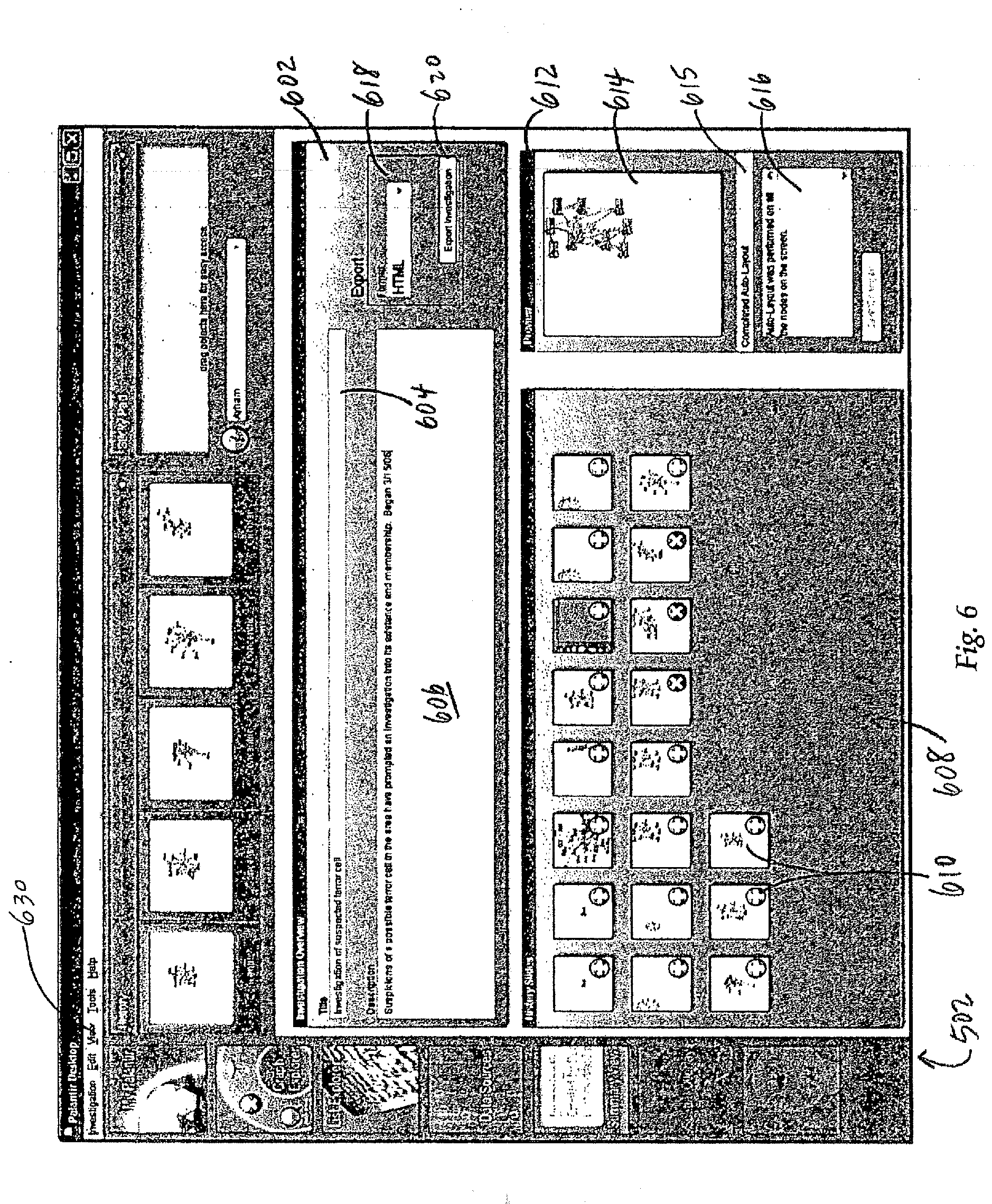 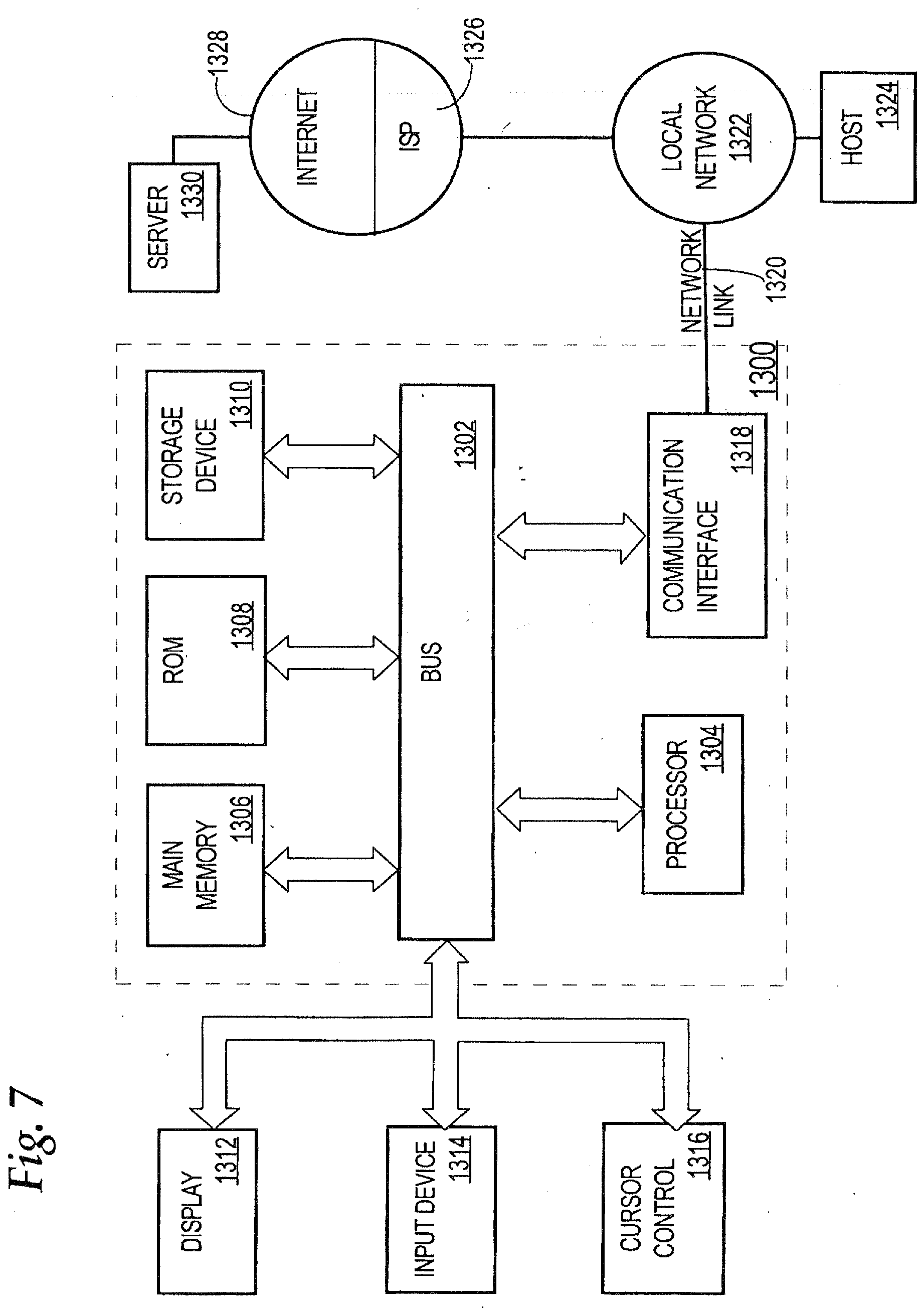