[0001] The present disclosure relates to configuration of a lighting system and associated method.

[0002] "Connected lighting" refers to a system of luminaires which are controlled not by (or not only by) a traditional wired, electrical on-off or dimmer circuit, but rather via a wired or more often wireless network using a digital communication protocol. Typically, each of a plurality of luminaires, or even individual lamps within a luminaire, may each be equipped with a wireless receiver or transceiver for receiving lighting control commands from a lighting control device according to a wireless networking protocol such as ZigBee, Wi-Fi or Bluetooth (and optionally also for sending status reports to the lighting control device using the wireless networking protocol). Such systems can be automated, or semi-automated, and frequently include sensors, either integrated into a luminaire or standalone devices, to provide input to the system for controlling the output illumination.
[0003] Examples of sensors used in lighting systems include light sensors and motion detectors. Such sensors allow a system to adjust lighting in response to changing ambient light conditions, and also in response to occupancy or spaces such as rooms or offices. Such sensors need to be configured to provide appropriate coverage and operation for automated control. Next to motion and occupancy sensors, lighting systems may also include other environmental sensors such as humidity sensors, air quality sensors (CO2,CO), noise sensors (to map noise pollution across the building or a city).
[0004] US2013/332114A1 discloses the use of an image sensor embedded in a presence sensor to recognize e.g. a doorway and determine how this existing sensor should be used and how this sensor is to be controlled to provide accurate presence detection. The "mapping" that occurs is a relationship mapping : a first presence sensor may be related to a doorway and a second presence sensor may be related to that same doorway, yet from the other side of the doorway.
[0005] US2016/198286A1 discloses a sensor installation location determination support system and a sensor installation location determination support method for determination of sensor location information.
[0006] US2013/226353A1 discloses automatically configuring a sensor to configure a building's energy management system, wherein a sensor disposition unit may calculate a position for a sensor to be disposed in the building based on the input information on the building.

[0007] Configuration of sensors in a lighting system can however be cumbersome, both for consumer and professional applications. Configuration may involve walk-tests to assess whether a motion sensor is triggering correctly from a targeted area, and where motion should be detected; typically the user has to adjust the sensor position and sensor sensitivity by trial and error until a satisfactory result is achieved.
[0008] It would be desirable to provide improved sensor configuration for a lighting system.
[0009] Accordingly, in one aspect of the invention there is provided a method according to claim 1 for configuring a lighting system including one or more sensors for controlling one or more lighting units for providing illumination of an area.
[0010] In this way lighting control assets (e.g. occupancy sensors, light sensors) and their suitability to fulfil certain lighting controls functions can be automatically mapped based on a captured image of the environment in which the system operates. This makes configuration less complex and time consuming for a user or installer.
[0011] In one embodiment, the or each target area is identified automatically based on analysis of the one or more obtained images. Thus the image can be analyzed to extract information relating to use of the space, and conditions within the space, which in turn allows appropriate target areas to be determined. Analysis may comprise object recognition in embodiments, for example recognizing one or more predetermined objects. Such objects may be predetermined objects or classes of objects, such as doors or windows, and templates or other information may be stored about such objects to allow them to be recognized or matched in an obtained image. Other objects include office furniture such as desks, partitions, chairs and filing cabinets for example. In addition to objects, a lack of objects, or clear areas may be identified, which can be indicative of thoroughfares or pathways for example. Determination of target areas may then be based on said identified objects or pathways.
[0012] In examples, the target area or areas need not be automatically identified based on an image, but can be identified manually, i.e. by user input. In an example a user can input a target area into an image (i.e. a 2D image space) or in a 3D model. Input can be via a GUI for example, and it may be possible to provide such input during capturing of the relevant image or images.
[0013] In embodiments, the method further comprises capturing said received one or more images with an image capture device (e.g. a mobile phone which is to be understood as including a smart phone, tablet or other mobile computing device other than a sensor for controlling the one or more lighting units), by a user. The user can be prompted to take such an image or images, and in embodiments, a prompt or prompts may be provided to the user to assist in timing and/or direction or position of image capture.
[0014] In embodiments, the one or more images includes a panoramic image composed of a plurality of sub-images. Although a single image, such as a wide angle image, may be used, a panoramic image typically allows a greater field of view and captures more information.
[0015] In addition to the image or images, the corresponding viewpoint, from which they were captured, may also be obtained. In embodiments, the target area or areas is determined based on such a view point, and in some embodiments, images from multiple different viewpoints are obtained. Preferably the image or images are taken from the primary location(s) where the end user will be triggering the sensors (e.g. a chair or transition areas in residential or work-space in an office) or - for daylight sensing - from the target area for the illumination (e.g. on the table of an office worker).
[0016] The output of the one or more sensor locations may be provide to a user in embodiments, for example by indicating on a graphical display, either in 2D or 3D, and the indication may be superposed on the obtained image or images. In other embodiments however, the output can be provided directly to a lighting system. In this way the output can be used to configure the system, or at least certain aspects of the system automatically. For example one or more existing sensors can be activated or deactivated, or calibrated for example. Also the control logic controlling inputs and outputs to the lighting system can be updated accordingly. For daylight sensor placement and/or calibration, the user may be asked to take an image at various times of the day (e.g. at midnight when dark and at 12:00 noon); in this way it is possible to distinguish between the contributions of the artificial lighting and natural lighting.
[0017] The invention also provides a computer program and a computer program product for carrying out any of the methods described herein and/or for embodying any of the apparatus features described herein, and a computer readable medium having stored thereon a program for carrying out any of the methods described herein and/or for embodying any of the apparatus features described herein.
[0018] The invention extends to methods, apparatus and/or use substantially as herein described with reference to the accompanying drawings.
[0019] Any feature in one aspect of the invention may be applied to other aspects of the invention, in any appropriate combination. In particular, features of method aspects may be applied to apparatus aspects, and vice versa.
[0020] Furthermore, features implemented in hardware may generally be implemented in software, and vice versa. Any reference to software and hardware features herein should be construed accordingly.

[0021] Preferred features of the present invention will now be described, purely by way of example, with reference to the accompanying drawings, in which:

Fig. 1 shows an example of a room including a plurality of lighting units and sensors;

Fig. 4 is a plan view of an office including a lighting system;

Fig. 5 shows the room of Fig. 1, with mappings between sensors and target areas;

Fig. 6 is a flow diagram illustrating an example of a process for configuration of a lighting system.

1. A method for configuring a lighting system (200) including one or more sensors (108, 210) for controlling one or more lighting units for providing illumination of an area, said method comprising:

- for a given sensing function, identifying (S606), based on said obtained one or more images, at least one target area where said sensing function is to occur; the method characterised by:

- determining, based on said obtained one or more images and said identified at least one target area (540, 542, 544), one or more sensor locations suitable for providing said sensing function at said target area; and

- prompting a user to provide a new sensor or move an existing sensor to said one or more sensor locations.

3. A method according to claim 2, wherein said predetermined objects include at least one of a door, a window, a corridor, a desk, a wall, a ceiling fan, or an HVAC air outlet.

5. A method according to any preceding claim, wherein said one or more images includes a panoramic image composed of a plurality of sub-images (306, 308).

6. A method according to claim 1, wherein said at least one target area is determined based on a viewpoint of said one or more images.

7. A method according to any preceding claim, wherein said one or more obtained images include images from at least two different viewpoints.

8. A method according to any preceding claim, further comprising capturing said obtained one or more images with an image capture device (304), by a user.

9. A method according to claim 8, wherein said image capture device (304) is a mobile phone.

10. A method according to any preceding claim, wherein said one or more sensor locations are output to a user.

11. A method according to claim 10, wherein said one or more sensor locations are output to the user through a map, said map derived from said obtained one or more images.

13. A method according to any preceding claim, wherein said one or more sensor locations are output to said lighting system directly.

14. A computer program comprising instructions which, when executed on a computer, cause that computer to perform the method of any one of claims 1 to 13. 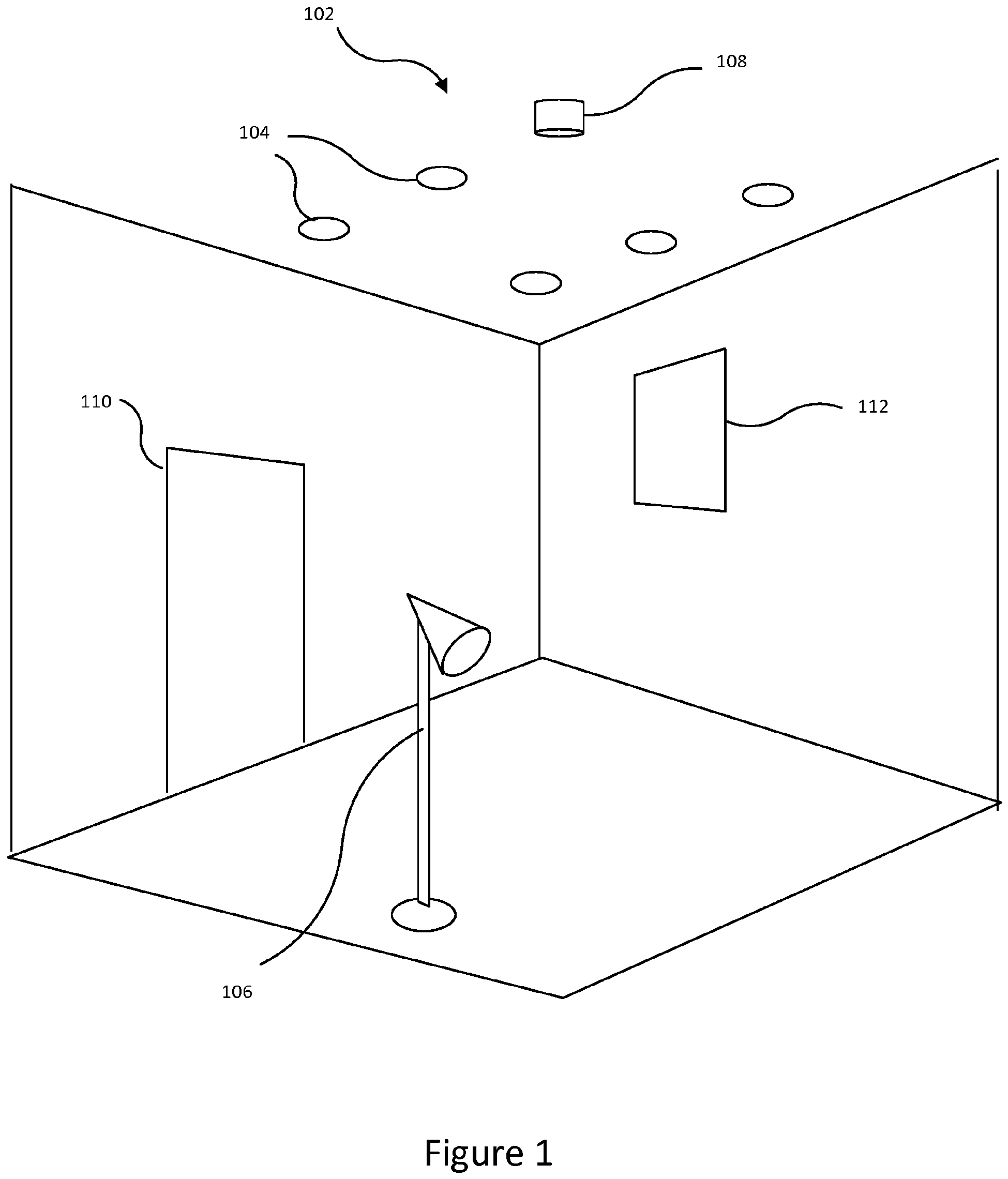 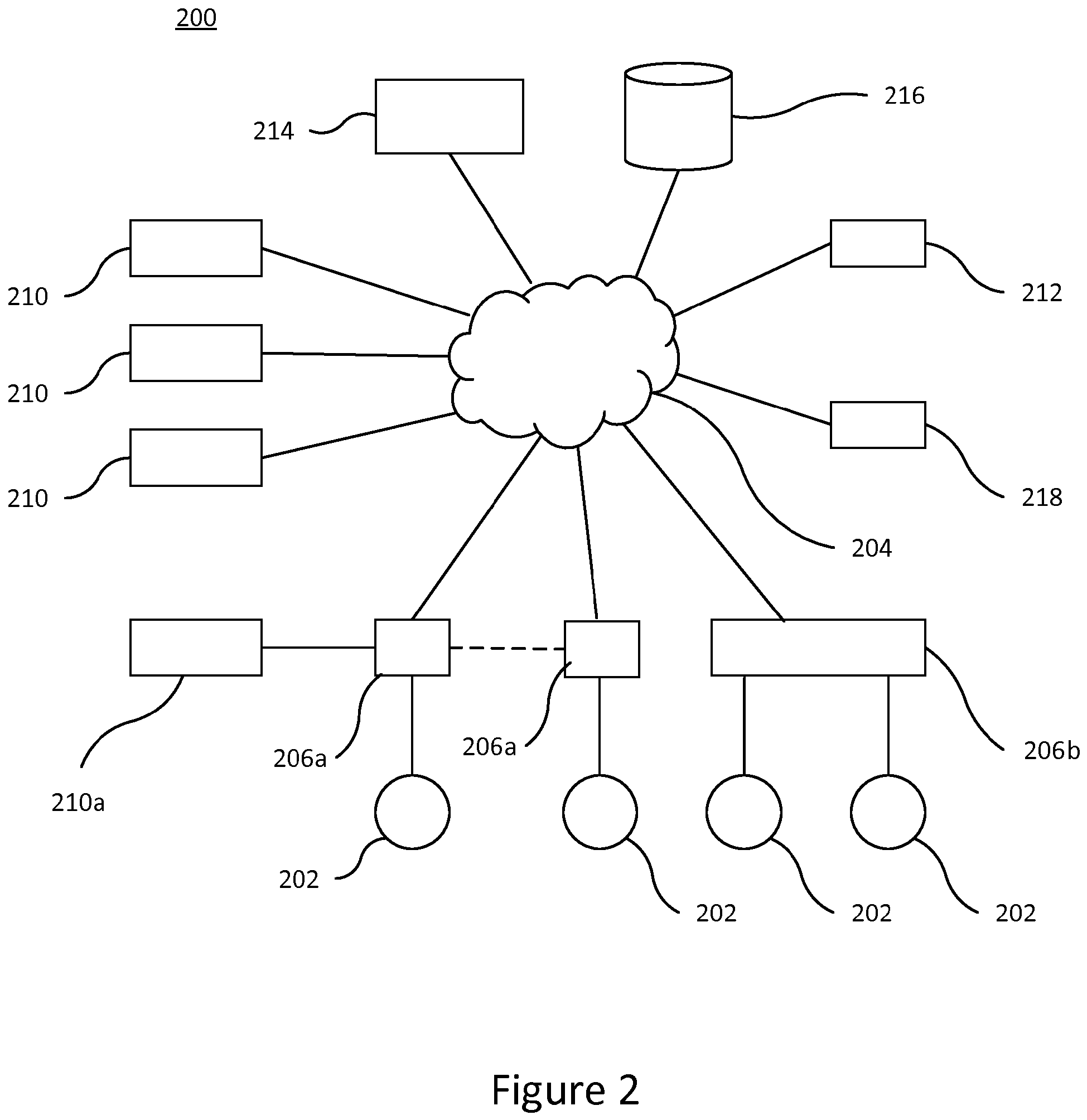 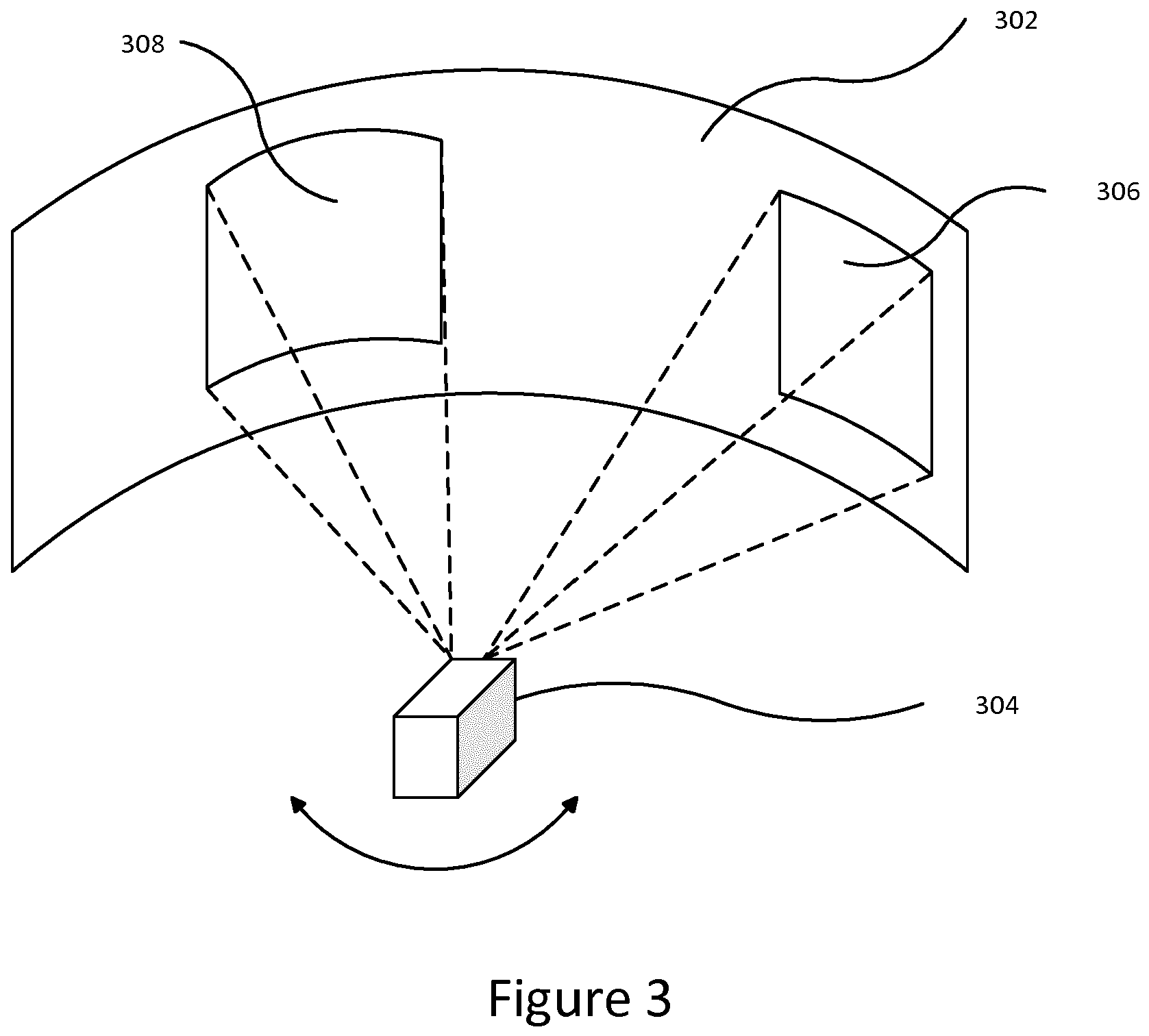 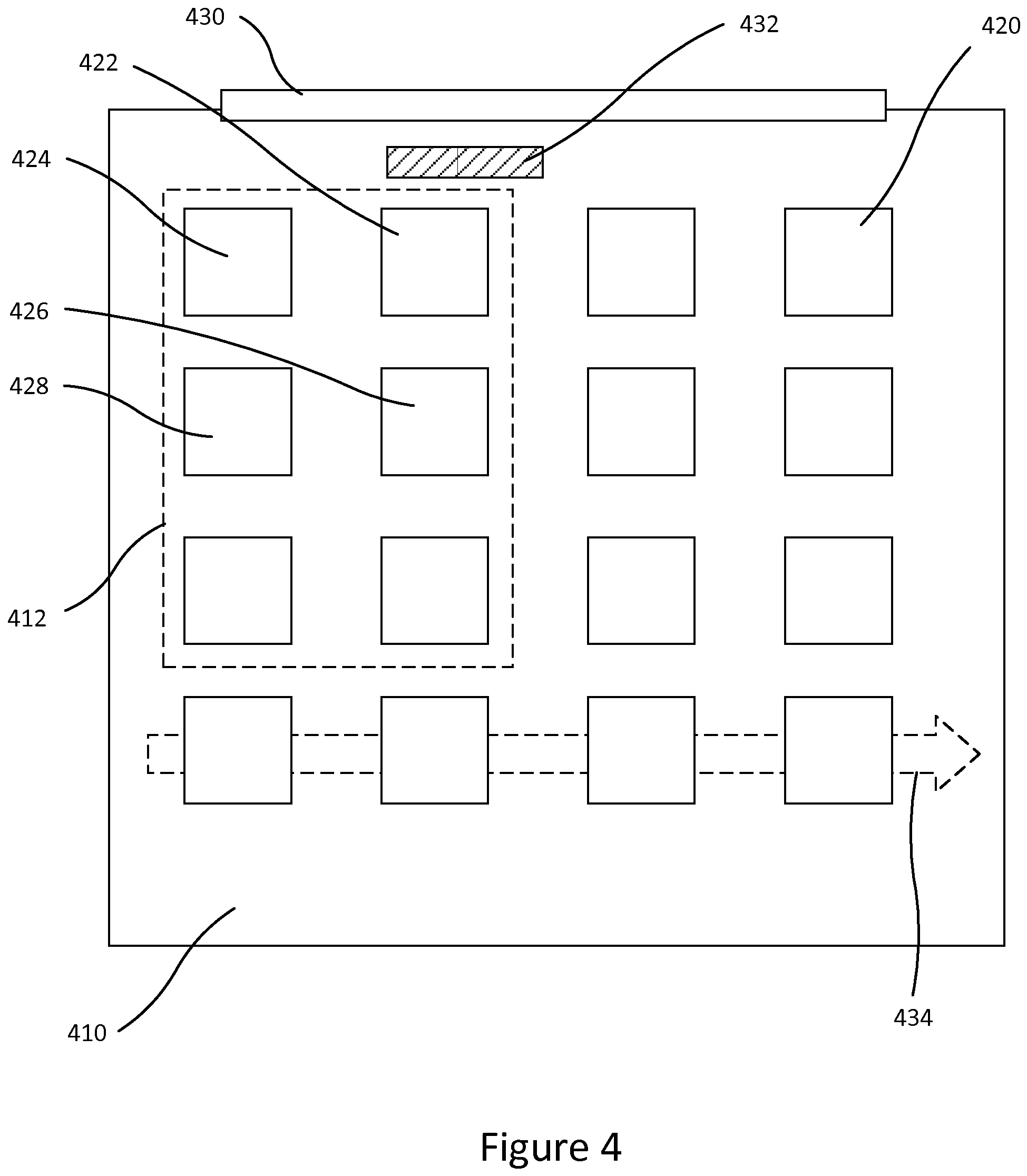 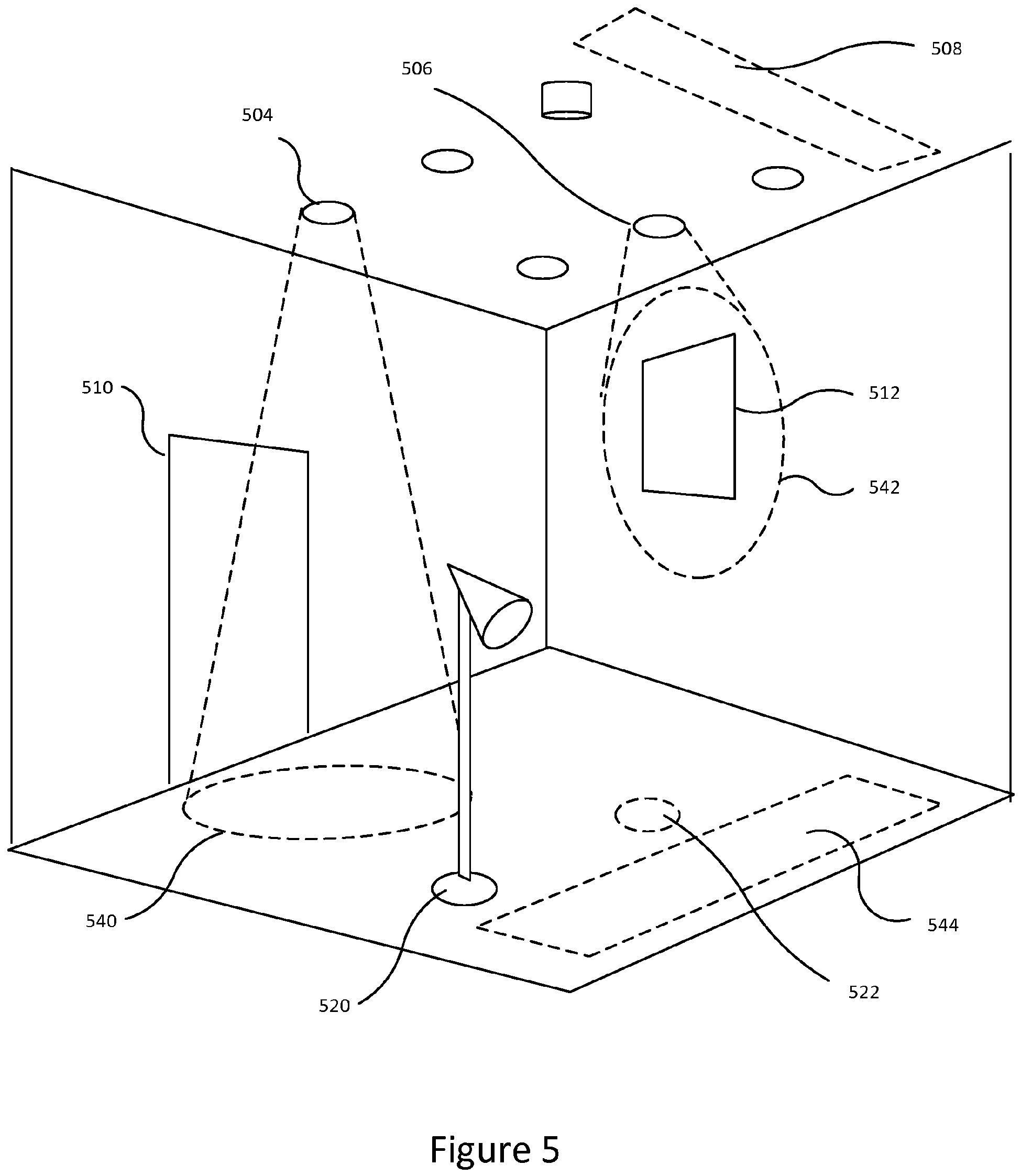 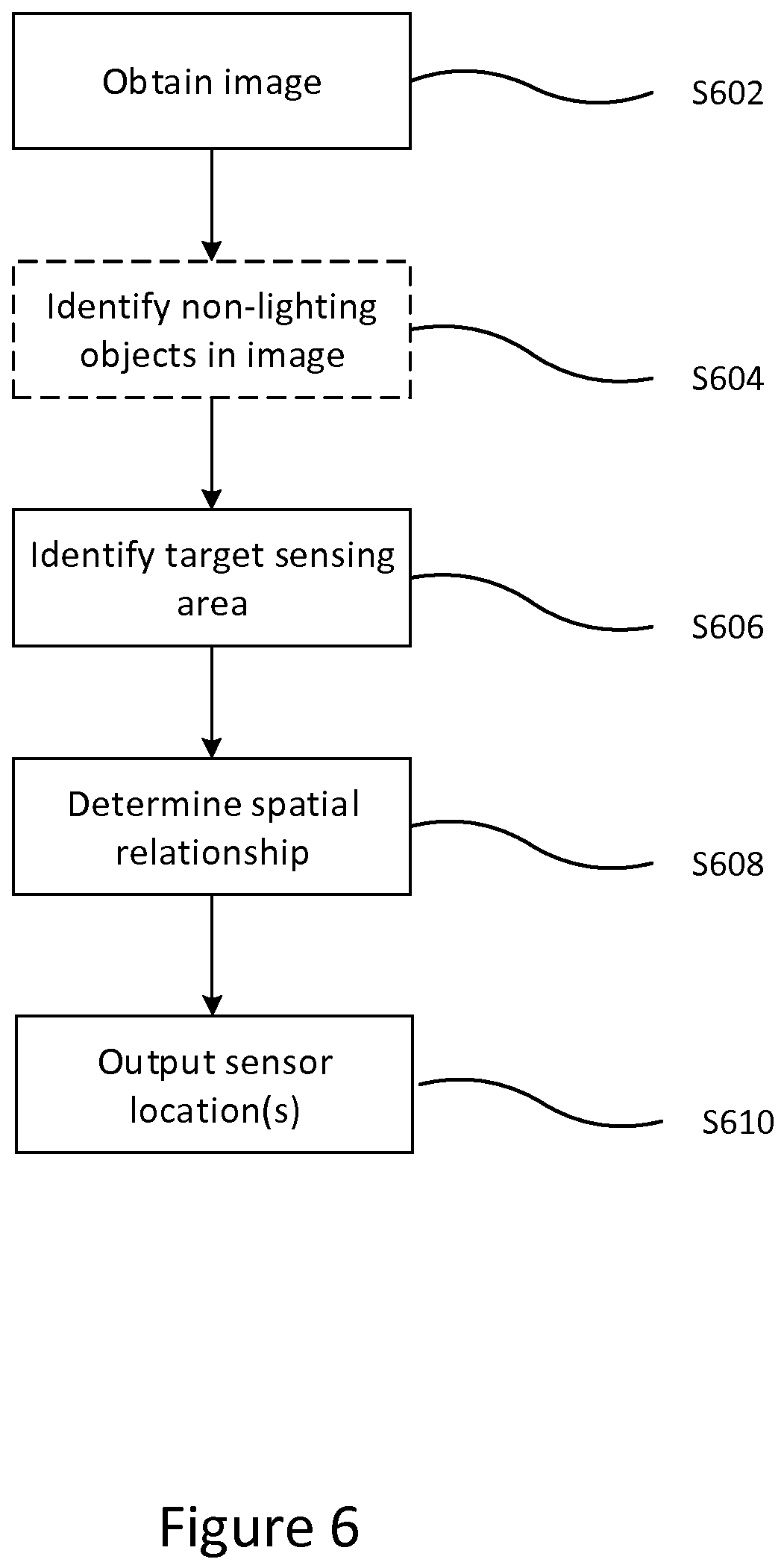