[0001] The present application claims priority to Chinese Patent Application No. 201610876752.3, entitled "USE OF IDHP IN PREPARATION OF DRUG OR HEALTH PRODUCT FOR PREVENTION AND TREATMENT OF CORONARY ATHEROSCLEROSIS DISEASE" filed with SIPO on October 08, 2016, and the entire content of which is hereby incorporated by reference.

[0002] The present disclosure relates to a new use of β-(3,4-dihydroxyphenyl)-α-hydroxyisopropyl propionate (IDHP), in particular to the use of IDPH for the manufacture of a medicament or healthcare food in prevention and treatment of diseases related to coronary artery atherosclerosis.

[0003] β-(3,4-Dihydroxyphenyl)-α-hydroxyisopropyl propionate (IDHP) is an active compound screened from a large number of metabolites and their series of modifications during the research on Danshen Dripping Pills, Guanxin Danshen Tablets, Danshen Drink and other compound Danshen prescriptions, and Jun-Shi pair herbs by using HPLC-MS, GC-MS, GC-FTIR, MS, NMR and other technical methods of metabolomics technology. IDHP can also be synthesized.

Figure 1 shows the effect of different concentrations of IDHP on the proliferation of human umbilical vein endothelial cells;

Figure 2 shows the effect of different concentrations of IDHP on the migration of human umbilical vein endothelial cells;

Figure 3 shows the effect of different concentrations of IDHP on the tube formation of human umbilical vein endothelial cells;

Figure 5 shows the result of the growth of intersegmental vessels promoted by IDHP in zebrafish;

Figure 7 shows the identification of IDHP by mass spectrum;

Figure 8 shows the identification of IDHP by liquid chromatography.

[0012] The structure of IDHP compound of the present disclosure is as shown in the following formula, and the preparation method thereof can be referred to CN 200410026205.3, but is not limited to the description of the literature.

[0013] The healthcare foods mentioned in the present disclosure may be a soft capsule, a dropping pill, an emulsion, a tablet, a spray, etc.

[0014] Human umbilical vein endothelial cells were seeded in a 96-well plate at a density of approximately 2,500 cells per well. After the cells were culture for 24 hours, the medium was changed for a fresh medium containing drug, 100 µl/well, and the cells were continued culturing for 48 hours. 2 hours before the end of drug treatment, CCK-8 reagent was added to the culture medium in the dark, 10 µl per well. The culture was continued for 2 hours, and then the absorbance at 450 nm was determined with a microplate reader to calculate the cell proliferation rate. The result is shown in Figure 1. Compared with the blank control group, IDHP significantly promoted the proliferation of vascular endothelial cell at a concentration of 10-9 to 10-7 M (P < 0.01).

[0015] Endothelial cells were seeded on a cover slip pre-coated with gelatin in a 24-well plate at a density of about 105 cells per well. After the cells attached to the cover slip and reached confluence, cells were starved in a medium without serum for 4 hours. A home-made tool was used to make scratch on the cover slip with cells. The cover slip was washed twice with PBS, and a medium containing drug was added, 600 µl/well. Control group was immediately fixed with ice-cold methanol at zero time point; rest of the cells were cultured for 16 hours, and then fixed with ice-cold methanol. Images were acquired under a microscope and subjected to statistics analysis. The result (Figure 2) shows that IDHP could promote the migration of human umbilical vein endothelial cells (HUVEC) in a dose-dependent manner at a concentration range of 10-10 to 10-7 M.

[0016] Pipette tips and 96-well plate were pre-cooled at -20 °C. Matrigel gel was placed on ice and melted, and then added to the pre-cooled 96-well plate (60 µl/well). Avoid the formation of air bubbles. The plate was placed on ice for 5 minutes to level the Matrigel gel, and then put into a cell culture incubator for 30 minutes to solidify. Endothelial cells were added to the wells (5×104 cells/well) containing Matrigel gel, and fresh medium containing different concentrations of the drug was added, incubated at 37 °C for 8 hours. The plate was observed under a microscope, 5 fields of view were chosen at 0, 3, 6, 9 o'clock positions and the center of each well, the number of tubules and the integrity of the tubular structure were observed and images were acquired. The result shows that, compared with the Ctrl control group, IDHP significantly promoted the tube formation of primary human umbilical vein endothelial cells (HUVEC), indicating that IDHP has an activity of promoting angiogenesis in vitro.

[0017] The transgenic Tg (VEGFR2:GFP) zebrafishes were cultured under the standard conditions of illumination for 14 hours /dark for 10 hours at 28 °C. Healthy and mature zebrafishes were put into a breeding container at a ratio of female to male 1/1 or 1/2 for mating. The fertilized eggs were obtained at 9 to 10 o'clock the next day. The fertilized eggs were sterilized and washed, then transferred to zebrafish embryo culture medium and cultured at 28 °C.
[0018] Drug solution was added to a 24-well culture plate, and 24 hpf embryos were carefully transferred to wells, 8-10 per well, and culture medium was added until a total volume of 2 ml to make sure that the final concentration of DMSO in the medium was not higher than 1%. After 24-hour drug treatment, the embryos were observed under a fluorescence microscope, and the total number of intersegmental vessels in trunk and tail were counted, and the relative generation rate of ISV in each administration group was calculated. Analysis of variance between groups was performed using SPSS software.
[0019] The result shows that IDHP at concentrations of 0.01, 0.1 and 1.0 µM, respectively, significantly promoted the growth of intersegmental vessels and posterior longitudinal blood vessels in zebrafish (Figure 4) with a significant increase in the total number and length of blood vessels (Table 1). According to the formula: relative generation rate (%) = (total length of blood vessels in the drug treatment group - total length of blood vessels in the control group of PTK787) ÷ total blood pressure of normal control group × 100, the relative generation rate was calculated, and the result showed a dose-dependent relationship of the drug treatment (Figure 5).
Table 1 The Promotion Effect of IDHP on the Growth of Zebrafish ISV

[0020] The whole blood samples of healthy volunteers were collected into the anticoagulant tubes and centrifuged at 800 g for 5 minutes at room temperature. The light yellow supernatant was the platelet-rich plasma (PRP); the remaining solution was further centrifuged at 4000 g for 10minutes at room temperature, and the supernatant obtained was platelet-poor plasma (PPP).
[0021] PRP was adjusted to 3×105 platelets/µl with PPP, 300 µl of adjusted PRP was added to 30 µl of PBS or different concentrations of IDHP and incubated at 37 °C for 3 minutes in a blood coagulation apparatus. Collagen or ADP at a final concentration of 3 µmol/L was added to initiate the aggregation reaction of platelets. The inhibitory effect of IDHP and clopidogrel on platelet aggregation was determined by turbidimetry. The result in Figure 6 shows that clopidogrel significantly inhibited ADP-induced platelet aggregation in the measured concentration range (p < 0.001); compared with ADP alone or collagen alone groups (Ctrl), IDHP respectively and significantly inhibit ADP- or collagen-induced platelet aggregation, and the inhibitory effect on collagen-induced platelet aggregation was more significant (P < 0.001).

[0023] After housing in the laboratory for 1 day, the test mice with qualified body weight were selected and randomly divided into groups according to body weight and sex, 10 for each group, half male and half female. According to the result of premeasurement, the absolute lethal dose was 2.4 g/kg. The mice were subjected to tail vein administration, the dose for the mice was calculated according to body weight. The doses were 2.4 g/kg, 2.2 g/kg, 2.0 g/kg, and 1.8 g/kg, respectively, and the drug delivery rate was calculated. The administration was completed within 10 minutes. The reactions of the mice were observed after the administration and the death of the mice was recorded within 14 days.
[0024] The main toxic reactions after intravenous administration were central inhibition, respiratory failure, etc. Most of the death occurred during the administration period. No abnormal changes were found in anatomy. After 14 days of observation, the mortality rate of the mice was calculated. LD50 was measured by the Bliss method and the value was 2.048 g/kg ± 0.085 g/kg, 95% confidence limit was 1.965 to 2.135 g/kg, the result is shown in Table 3:
Table 3 LD50 of IDHP Measured by Bliss's Method in Mice Administered via Tail Vein

[0026] After the above operation, the tubes were put in water bath at 37 ± 0.5 °C, one tube from each group was taken at 0.5 h, 1 h, 2 h and 3 h respectively, centrifuged at 3000rpm for 15 minutes. Red blood cell hemolysis was observed, at the same time, the morphology of red blood cells was observed under light microscope.
[0027] The test result shows that the red blood cells were intact, there was no obvious hemolysis, suggesting that IDHP has no hemolysis effect.

[0029] For specific implementation, refer to but is not limited to the following solution:
Danshensu (5.0 mg, 0.025 mmol), isopropanol (0.3 mg, 0.005 mmol), water (1.5 ml) and lipase (5 mg) were sealed, put in a shaker (220 rpm) and incubated at 37 °C for 24 hours. 100 µl of the reaction solution was taken, added with 100 µl of ethyl acetate, and shaked for 20 seconds. The organic phase was subjected to liquid chromatography and mass spectrum. The mass spectrum result ([M-1] = 239.0965) is shown in Figure 7; the liquid chromatography result is shown in Figure 8.
[0030] Liquid chromatography detection conditions were, methanol : 0.2% formic acid water = 3 : 7; flow rate: 0.6 ml/min; chromatography column: C18 (zorbax), 250 mm, 5 µm, 4.6 mm (inner diameter); column temperature: 25 °C.
[0031] Combined with the inventors' previous research in which it was found that Danshensu is a human body-derived substance, also, lipase widely presents in animals, plants and microorganisms (such as molds, bacteria) tissues containing fats, and human body contains isopropanol, suggesting that IDHP is an endogenous substance of human body.

[0033] IDHP: 10.4 g, starch: 6.3 g, sodium carboxymethyl starch: 1.8 g, polyethylene glycol (molecular weight 6000): 26.5 g. During the preparation, prescription amount of IDHP and polyethylene glycol 6000 were heated to 80 °C to get melted, and then starch and sodium carboxymethyl starch were added, mixed well, dripped into liquid paraffin coolant (1 to 5 °C) to make 1000 pills, 45 mg per pill. Traces of oil on the surface were removed to obtain the final product.
[0034] The present disclosure has been described in detail above including its preferred embodiments. However, it should be understood that, considering what is disclosed in the present disclosure, a person having ordinary skill in the art can make modifications and/or improvements to the present disclosure within the spirit and scope of the invention, which also fall within the scope of the present disclosure.

1. Use of β-(3,4-dihydroxyphenyl)-α-hydroxyisopropyl propionate (IDHP) for the manufacture of a medicament in prevention and treatment of a disease related to coronary artery atherosclerosis.

2. The use according to claim 1, wherein the disease related to coronary artery atherosclerosis is one or more selected from the group consisting of stroke, coronary heart disease and myocardial infarction.

3. Use of IDHP for the manufacture of a healthcare food in prevention and treatment of a disease related to coronary artery atherosclerosis.

4. The use according to claim 3, wherein the disease related to coronary artery atherosclerosis is one or more selected from the group consisting of stroke, coronary heart disease and myocardial infarction.

5. Use of IDHP for the manufacture of a medicament for inhibiting platelet aggregation.

6. Use of IDHP for the manufacture of a healthcare food for inhibiting platelet aggregation.

7. Use of IDHP for the manufacture of a medicament for promoting angiogenesis.

8. Use of IDHP for the manufacture of a healthcare food for promoting angiogenesis.

9. Use of IDHP for the manufacture of a medicament in prevention and treatment of vascular dementia.

10. Use of IDHP for the manufacture of a healthcare food in prevention and treatment of vascular dementia. 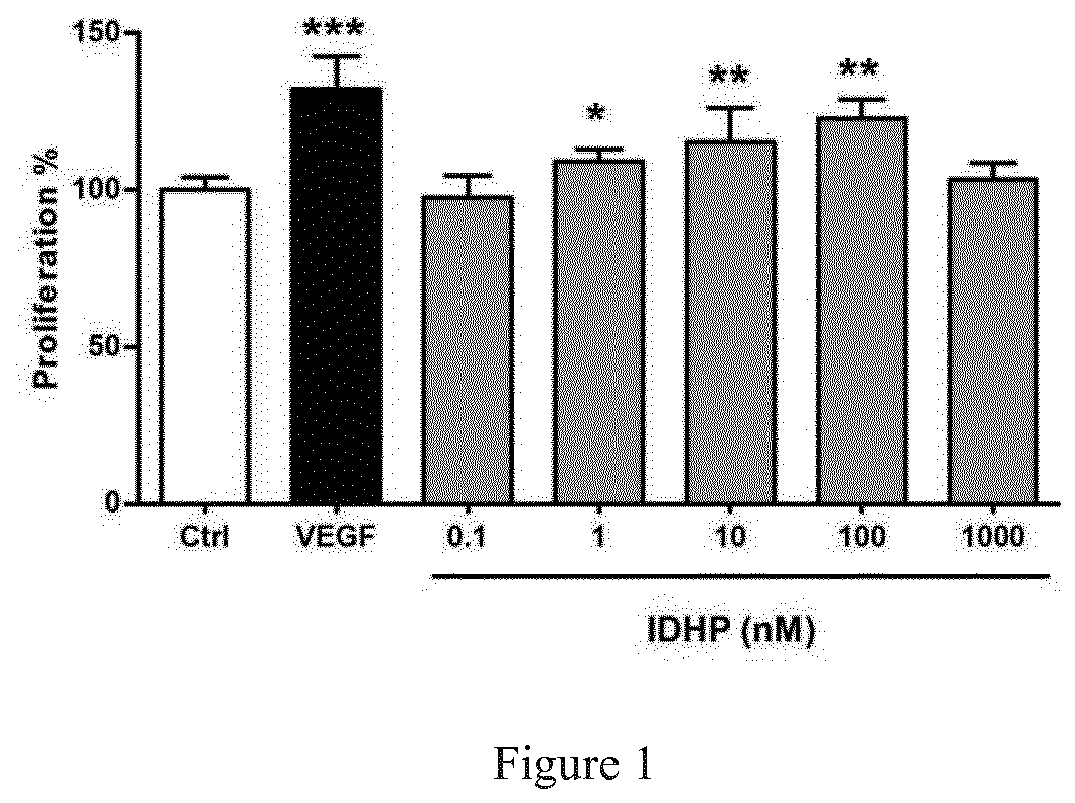 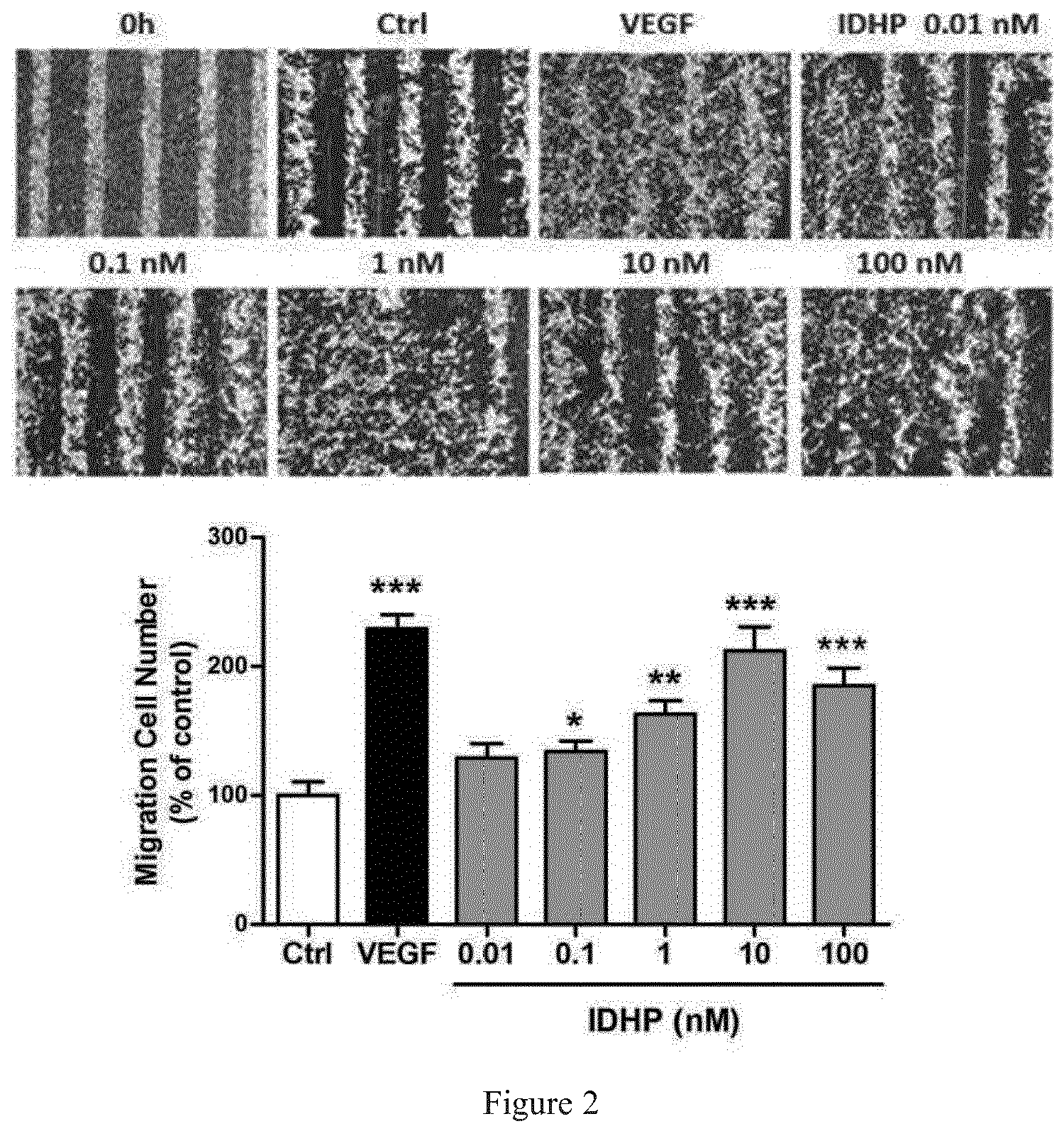 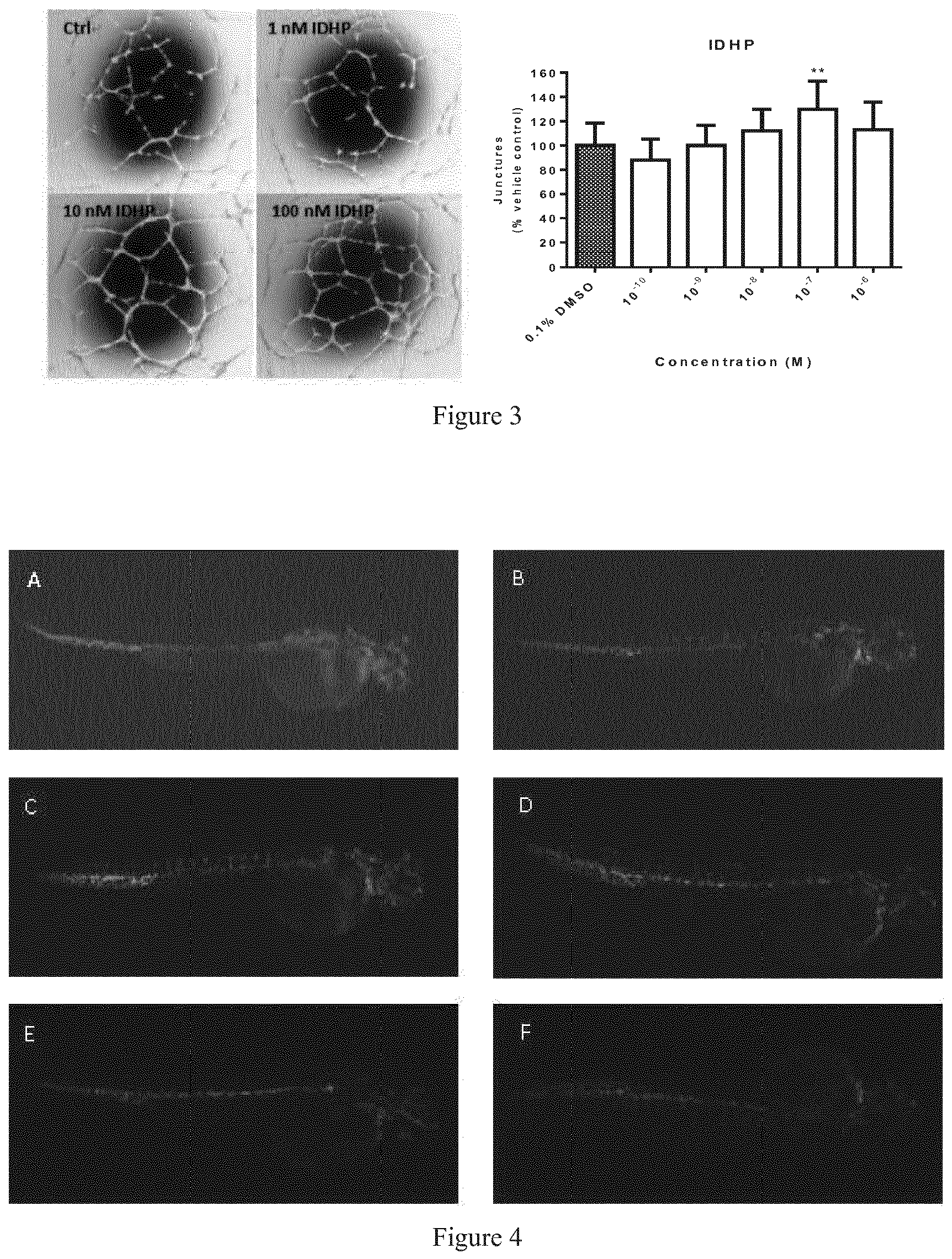 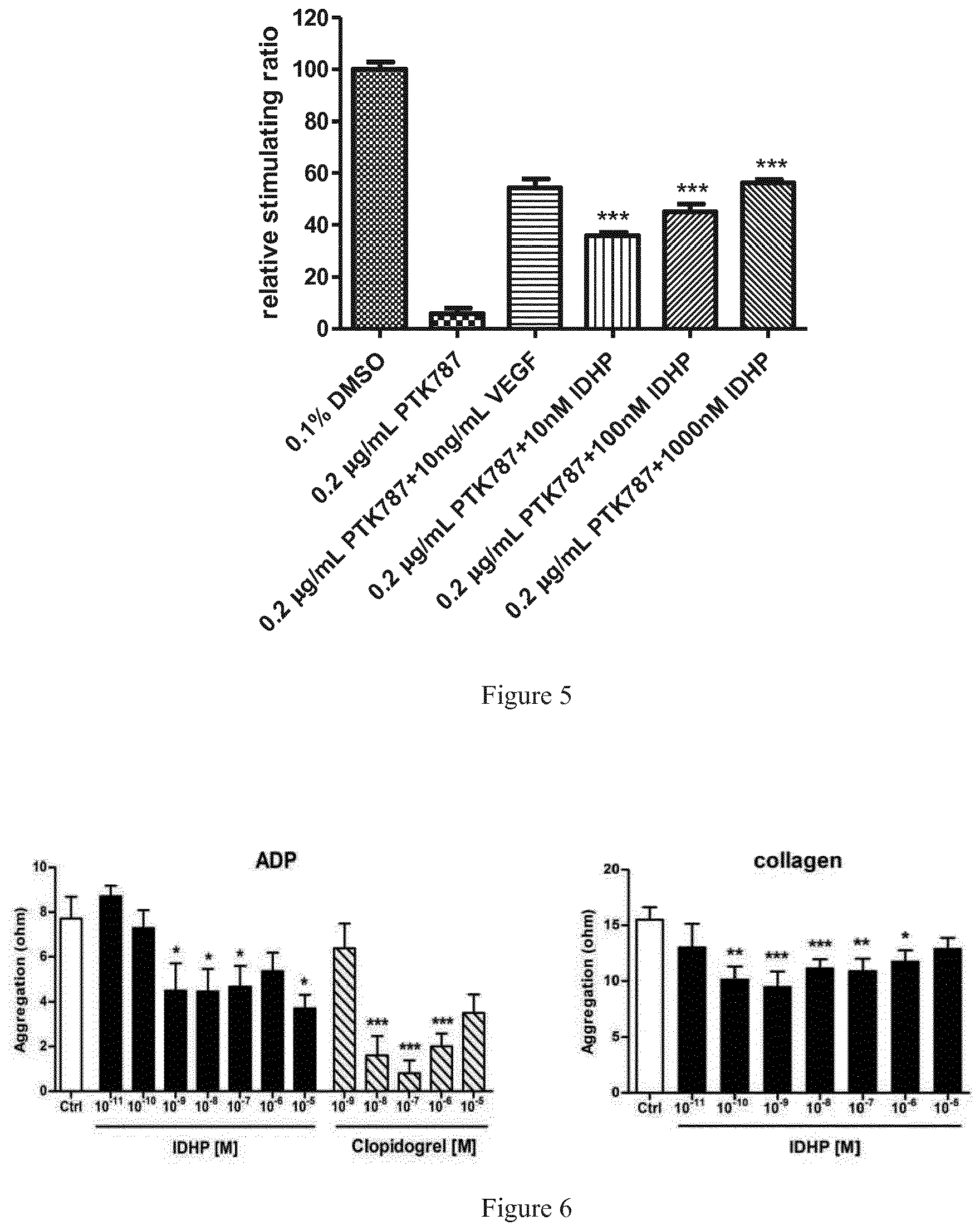 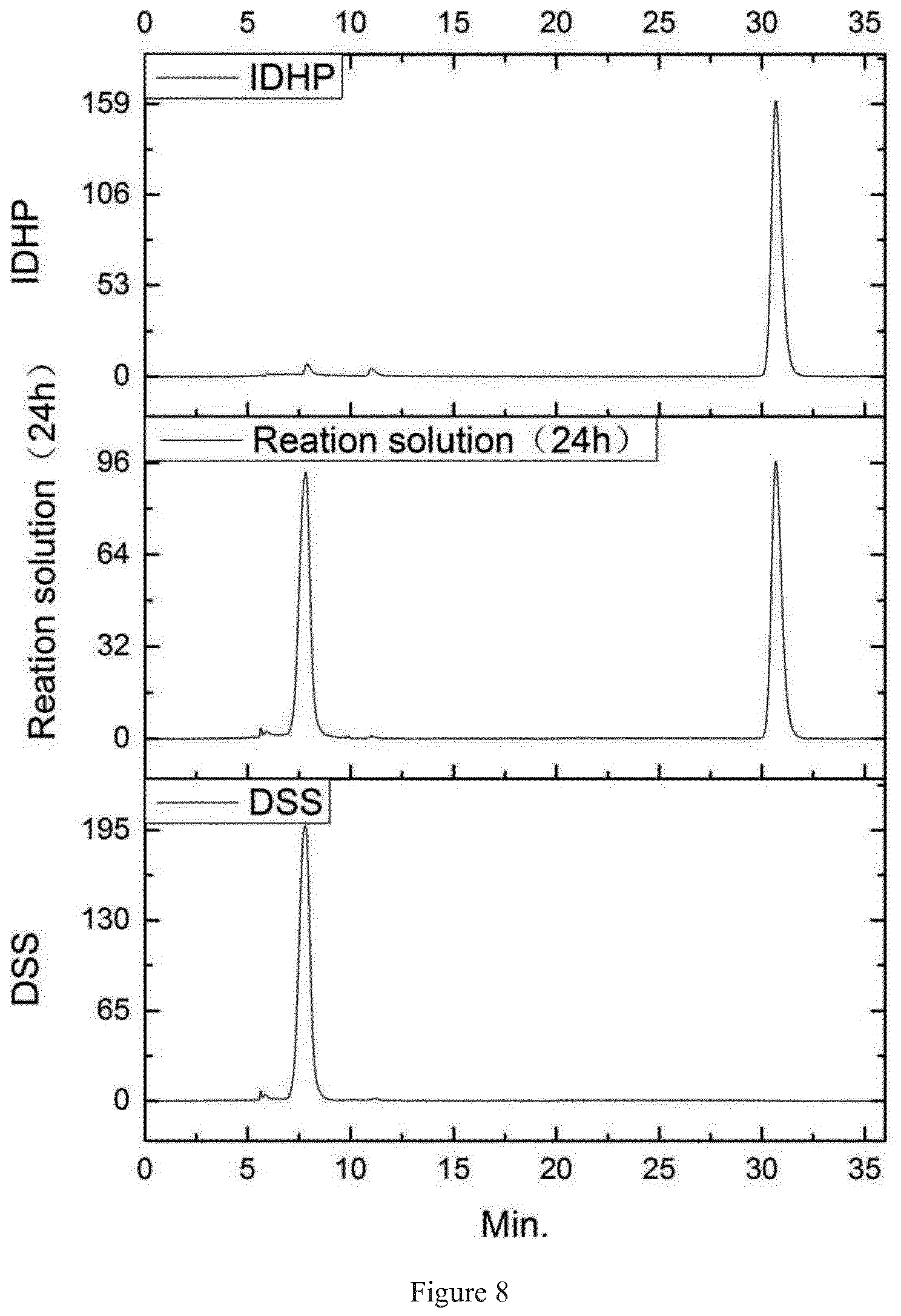 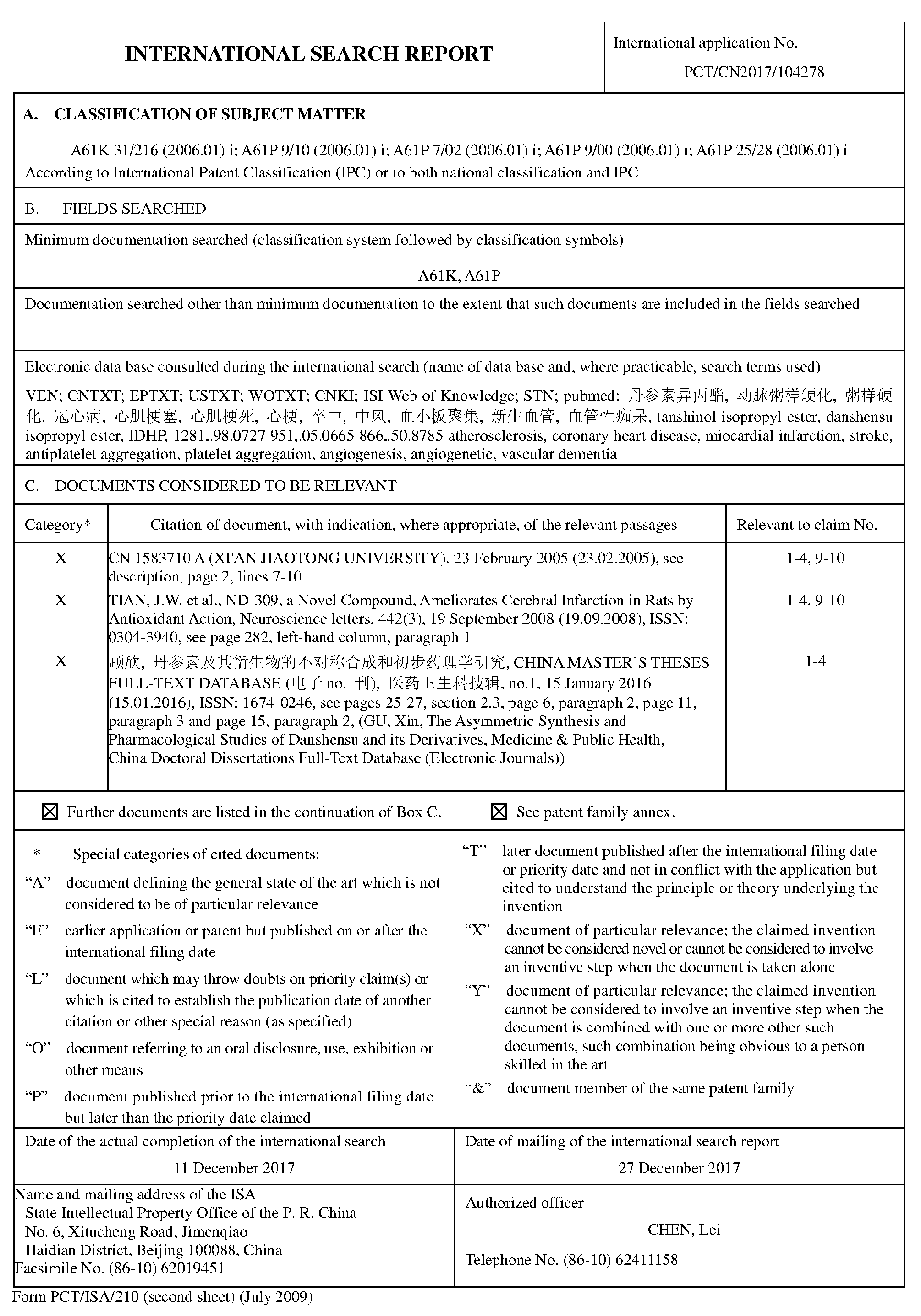 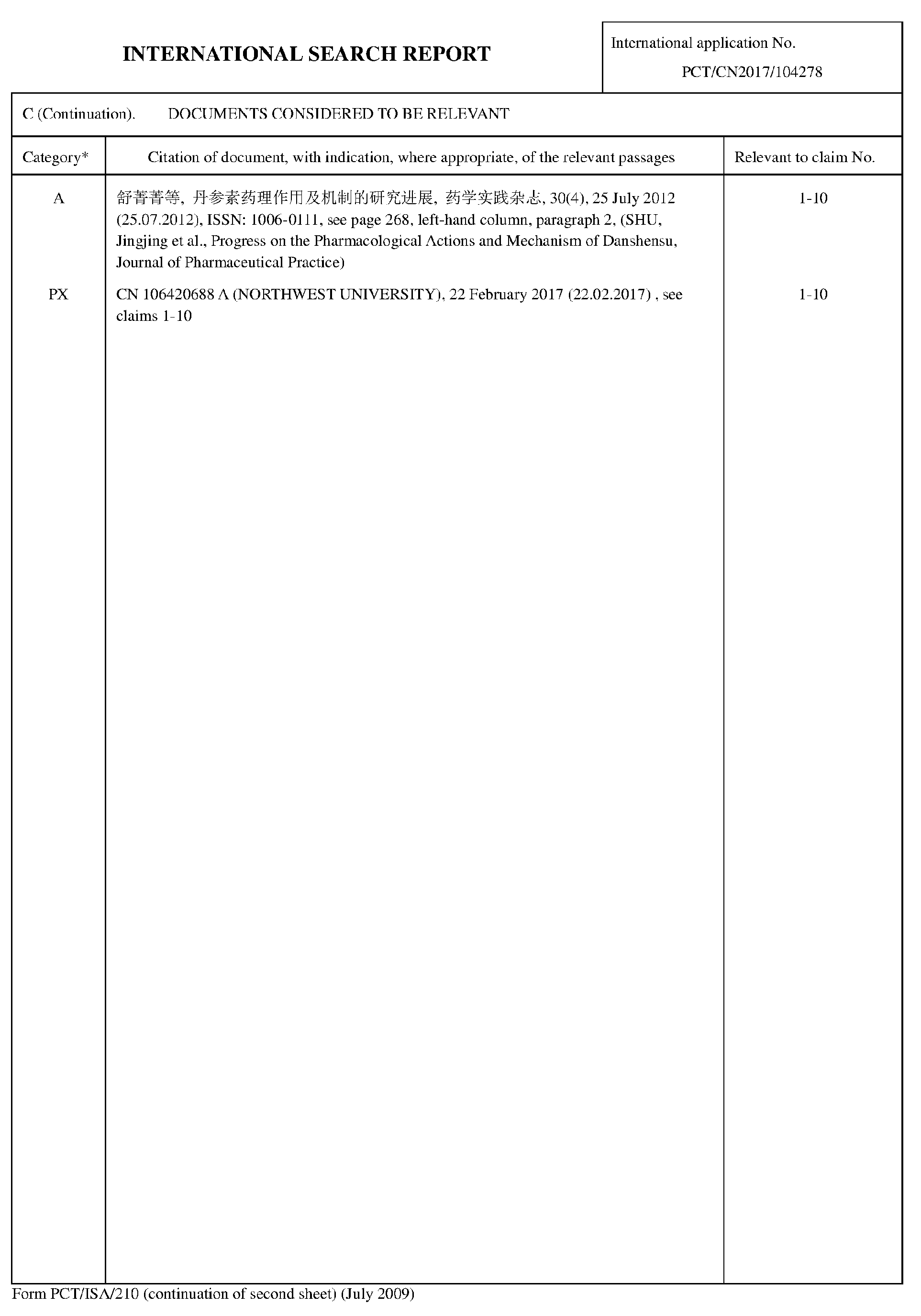 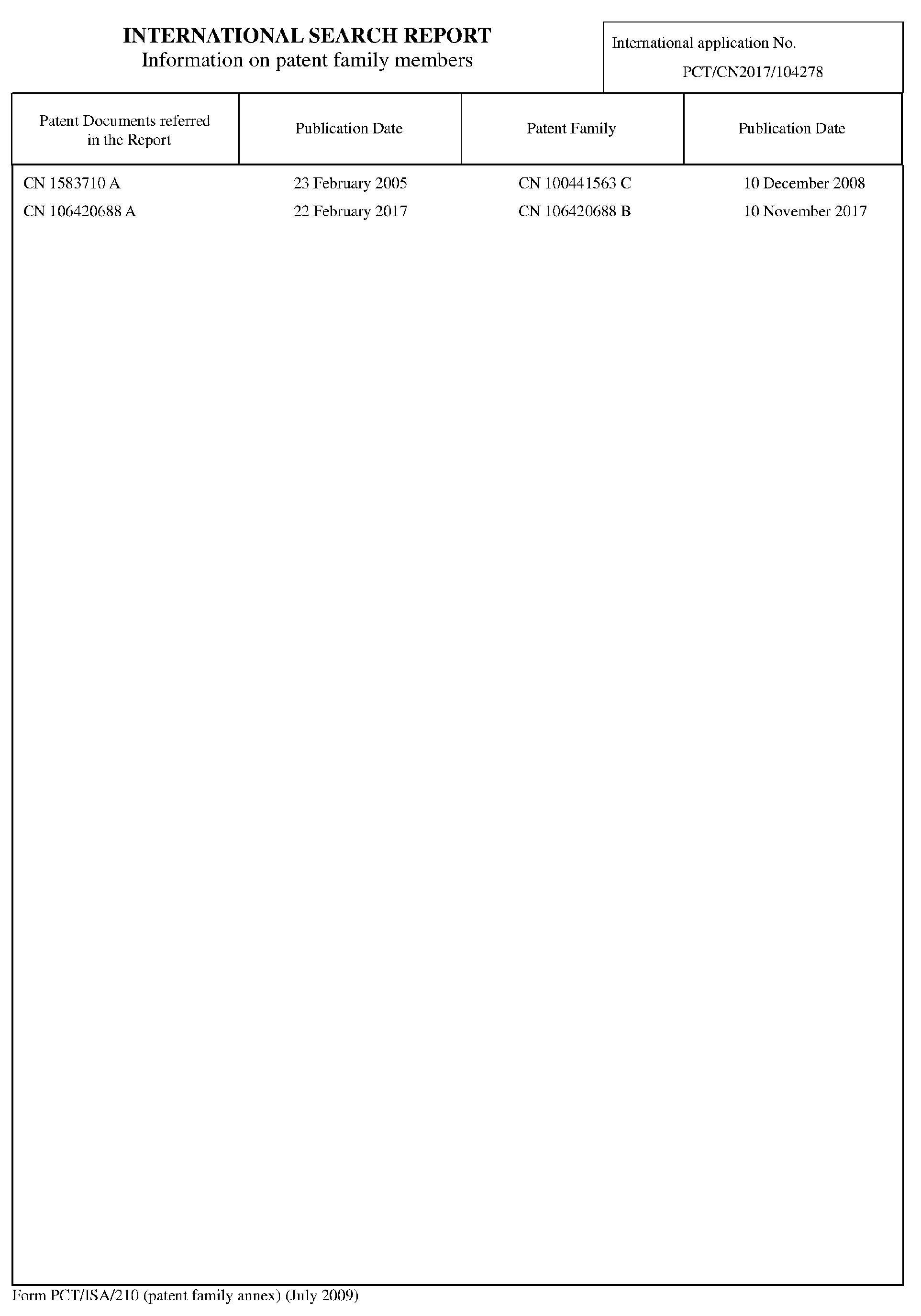