[0001] The present invention belongs to the technical field of veterinary practice, and more particularly to artificial insemination applied to the swine sector. The invention particularly refers to a composition for manufacturing a seminal additive useful for artificial insemination in animals, concretely in female pigs, in order to enhance fertility and prolificacy.

[0002] The object of swine artificial insemination is, with a lower operative cost and a higher saving of time and of working organization, to achieve high rates of gestation and a percentage lower than 15% of repetitions, since each oestrous cycle that is lost, or gestation not attained, has a negative effect in the production efficiency being required, as the birth-new gestation period is increased in 21 additional days.
[0003] One of the advantages of artificial insemination is that it may require a higher level of handling than in natural covering. For example, with artificial insemination there are more opportunities for human errors to occur than with natural covering. When breeding boar or swine stallion mounts the female, the semen is not exposed to significant environmental changes, and it is generally deposited into the female more than once, during a period comprising the optimum moment for fertilisation.
[0004] However, in artificial insemination it is possible that, while semen is collected, diluted, transported and then artificially deposited, many environmental changes occur. Insemination must be correctly done and in the optimum moment. In order to obtain a high percentage of gestation and numerous litters, detection of oestrus must be carefully and faultlessly performed.
[0005] Efficiency of the swine artificial insemination depends both on the detection of the ovulation period and on the insemination protocol. The current artificial insemination protocols are based on applying spermatozoids within the 24h-period prior to ovulation, with the further inconvenience that ovulation in the female pig occurs serially and not simultaneously for all the available oocytes in every cycle.
[0006] Artificial insemination involves, almost exclusively, the use of refrigerated semen collected between 1 and 7 days prior to use, although several studies indicate that optimum fertility requires insemination within the 48 hours after seminal collection, whether using short or long preservation diluents.
[0007] Seminal freezing would allow eliminating time and space restrictions for using of seminal doses. However, insemination using cryopreserved semen features a reproductive performance lower than that obtained with refrigerated semen, both in terms of birth percentage and of litter size. In fact, acceptable percentages of fertility are only found when insemination is performed within a range of 4 hours before each oocyte maturation.
[0008] The damage caused by the cryopreservation process is believed to induce an effect in spermatozoids being similar to capacitation or premature ageing, associated to an increase of DNA fragmentation. Therefore, control of sperm capacitation and premature ageing represents a point of interest for improving fertility associated to the use of swine cryopreserved semen.
[0009] Semen stimulants, also known as semen enhancers or additives, are those substances which, while not being necessary for semen preservation, improve fertility and/or prolificacy of semen when applied to the seminal doses at the moment immediately before insemination of the female individual, either acting on the intrinsic characteristics of the semen (increasing motility, favouring sperm capacitation, etc.), or triggering in the inseminated female organism reactions being favourable for the fertilising success of the insemination.
[0010] The use of semen enhancers have been described in the state of the art. Seminal dilution media may be classified in three categories: extenders (increase seminal volume), preservatives (preserve and protect semen) and enhancers (improve fertilization conditions and embryo viability). Specifically, in relation to the semen dilution media from this last group, reference is expressly made to two particular substances such as hyaluronidase (favouring gametic conjugation) and oxytocin (stimulating tubal-uterine contractions involved in sperm transport).
[0011] In the state of the art, an increase in fertility in cows and sows has been described with these semen enhancers. In the 70s, with the development of "in vitro" fertilisation (IVF), substances such as Methylxanthines or calcium ionophores started to be used so as to promote hyperkinesia and sperm capacitation required for fertilization success, especially with oligospermic and hypokinetic semen. An example of methylxanthine is caffeine, which is of practical usefulness for improving fertilization capacity of the refrigerated or frozen swine semen, improving the motility vigour, by acting as sperm cell activator.
[0012] Oxytocic substances are highly important in formulating semen enhancers, in particular it has been described a beneficial effect on fertility improvement in sows after addition thereof to the swine semen, since there is a "lack of coital stimuli" at the moment of inseminating sows, which results in a decrease of oxytocic discharges which the mechanical coital act implies, and thus a decrease in the contractility of the genital tract, reducing the capacity thereof for absorbing semen towards the area where the oocytes are to be met (oviduct).
[0013] On the other hand, another one of the groups of compounds being important in artificial insemination is hormones. Most frequently used reproductive hormones include the following groups: gonadotropins, progestins, analogues of the gonadotropin releasing factor (GnRH) and prostaglandins. Generally, it may be said that gonadotropins are indicated for stimulating oestrus, progestins for synchronizing thereof, GnRH analogues for ovulation control and prostaglandins for birth or for improvement of uterine involution processes.
[0014] Specifically, the synthetic GnRH are 50 times more powerful than natural ones, with an example being Lecirelin, which is joined more persistently to GnRH Hypophyseal receptors and is characterized by a very high power.
[0015] However, there is not a composition in the state of the art that meets the capacity of increasing fertility and prolificacy in swine artificial insemination. It was therefore desirable a composition of semen enhancers providing a higher efficiency of the swine artificial insemination process against natural covering, avoiding the existing drawbacks from the state of the art.

Example 1. Preparation of the pharmaceutical composition

[0029] Batches of 2,000 doses were prepared, wherein each dose is carried in a 1 ml carrier, obtaining total volumes of 2,000 ml. The following products were added into an Erlenmeyer 2,000 ml volumetric flask, perfectly clean and dry: and then physiological saline is added until a volume of 2000 ml is reached.

Example 2. Efficiency of the composition in field studies

[0030] In order to examine the effect of the prepared pharmaceutical composition in Example 1 above, for use thereof in swine artificial insemination, field studies were carried out about the effects on fecundity, birth fertility and prolificacy (mean of the total piglets being born (either dead or alive) per delivery). Tables 1 and 2 show the results of the studies being carried out, observing how there are differences being statistically significant in all the experimental groups with respect to control groups.
[0031] The statistical characters of fecundity (%fecundity), prolificacy (N.T.), number of alive births (N.V.) and mortality (% of N.M. against N.T.), were tested on factorial ANOVA, LSD Fisher and SAS package (Statistical Analysis System).
Table 1. Effects on fecundity and birth fertility
Table 2. Effects over prolificacy

1. Veterinary composition, characterized in that it comprises oxytocin, lecirelin and caffeine.

3. Veterinary composition according to claim 1 or 2, characterized in that it comprises lecirelin acetate.

4. Veterinary composition according to claims 1 to 3, characterized in that it comprises an excipient.

5. Veterinary composition according to any of claims 1 to 4, characterized in that said excipient is 10% chloretone.

6. Veterinary composition according to any of claims 1 to 5, characterized in that the composition is in aqueous liquid form.

7. Veterinary composition according to any of claims 1 to 6, characterized in that it is packaged in multi-dose containers.

8. Veterinary composition according to any of claims 1 to 7, characterized in that it is directly administered in the seminal doses at the moment prior to the insemination.

9. Use of the composition according to any of claims 1 to 8 as a semen additive useful for artificial insemination in animals.

10. Use according to claim 9, characterized in that said animals are mammals.

11. Use according to claim 10, characterized in that said mammals are selected in the group consisting of sows, cows, goats and sheep.

12. Veterinary composition according to any of claims 1 to 8 for use thereof in artificial insemination in animals with low semen concentration or asthenospermia or for use thereof as an additive at seminal doses stored during an extended period of time under refrigeration. 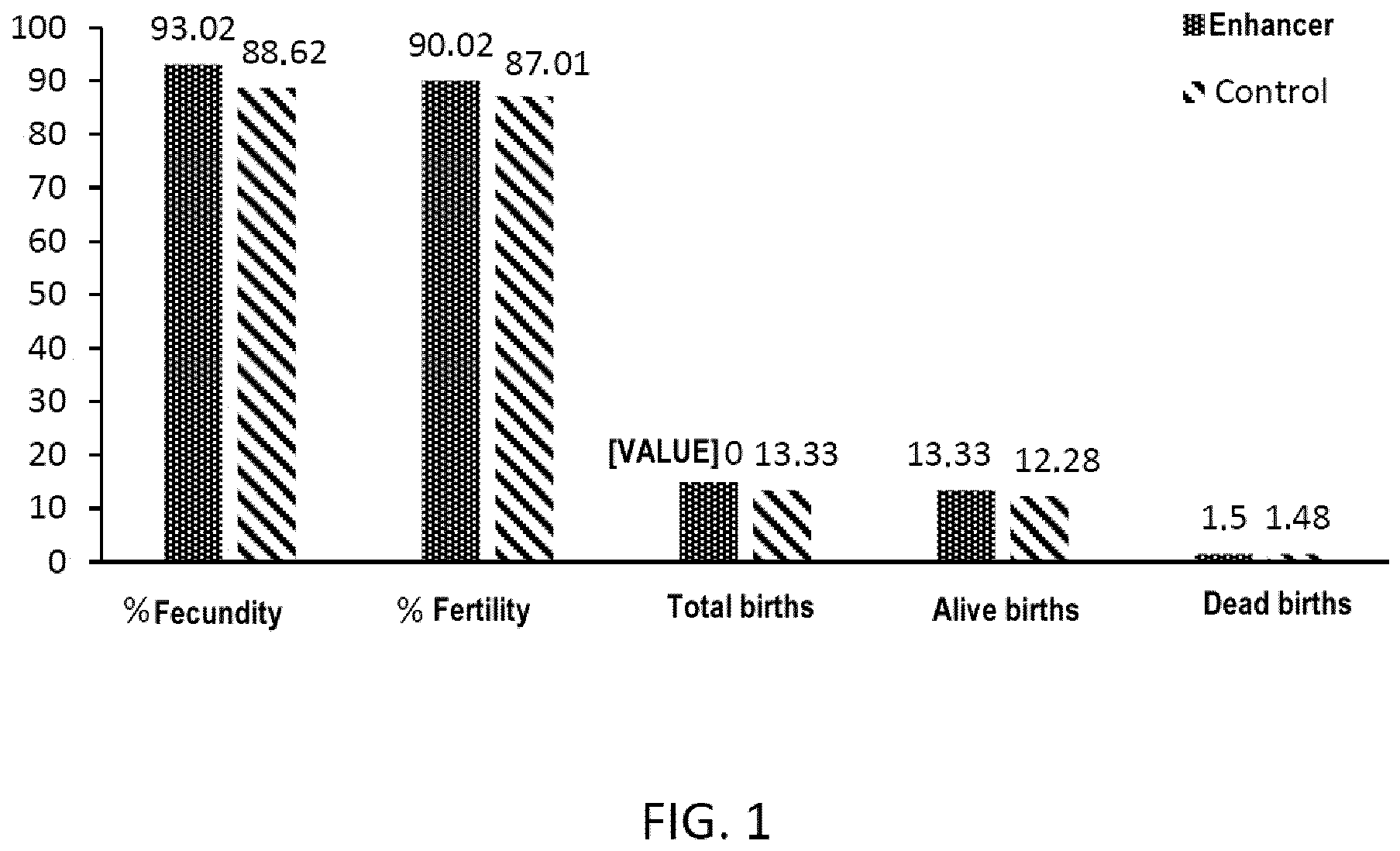