1. Field of the Description.

[0001] The present description relates, in general, to, and, more particularly, to amusement and theme park rides or attractions with vehicles that have their movements controlled, at least in part, by the vehicle occupants or passengers. More particularly, the present description relates to an attraction, which may be implemented at an amusement or theme park or other entertainment facility, that includes one-to-many holonomic vehicles, which are each configured to have operations (e.g., vehicle movement defined by direction of travel and/or velocity) controlled in a collaborative manner by the vehicle's passengers.

[0002] Amusement and theme parks are popular worldwide with hundreds of millions of people visiting the parks each year. Park operators continuously seek new designs for attractions and rides that attract and entertain park visitors in new ways to encourage more and more people to visit their parks and to provide unique experiences that differ from those available at other parks.
[0003] Recently, there has been an increasing demand for rides that allow the participants to interact. In some rides, passengers in a vehicle can operate devices in their vehicles to interact with objects outside the vehicle such as to collect points as the vehicle moves along a fixed ride path. In other rides, the ride path is generally fixed or constrained, but passengers can provide input to operate the vehicle such as to spin or to move up and down with a predefined range. In each of these cases, though, there is typically no collaboration among the riders or passengers. In the first examples, each passenger is competing with the other passengers to score more points, and operation of the vehicles is often not affected by the user input. In the latter examples of rides, only one input device is provided such that the passengers have to share this input device or take turns controlling vehicle operations.
[0004] Hence, there remains a need for a new attraction (or ride as these terms may be used interchangeably herein) that allows or even forces passengers of a vehicle to collaborate to effectively or successfully control operations of their vehicle. In some preferred examples, it may be useful for the attraction to be designed to require collaboration of the vehicle passengers to maneuver a vehicle in a particular ride or attraction space to participate in a game, to achieve a particular goal for a play space, to move along a ride path while avoiding obstacles and other vehicles, or the like.

Fig. 1 is a schematic or functional block drawing of an attraction or ride system adapted to provide passengers of a vehicle with collaborative control or driving of the vehicle in a ride or attraction drive space;

Fig. 2 is a partial top perspective view of an attraction or ride system during use showing four passengers of a vehicle collaborating to drive their vehicle in a ride space;

Figs. 3A-3D are schematic or diagrammatic illustrations of a holonomic vehicle operating in four states according to the collaborative driving method described herein (e.g., by implementation of the system of Fig. 1);

Fig. 4 is a top schematic view of an attraction or ride system showing one vehicle for ease of illustration and results of processing of user input by a system controller to operate a holonomic vehicle to have a resultant velocity on a ride surface (or on a surface in a ride space); and

Fig. 5 is a flow diagram of a collaborative driving or control method as may be performed by the attraction or game control module (and an algorithm(s) carried out by executing its underlying code/instructions).

1. 1. A system for use in a park attraction that provides a collaborative driving experience, comprising:

a vehicle including a body including a plurality of user input assemblies and a drive system adapted to move the body about the park attraction; and

a system controller operating to:

transmit the drive control signal to the vehicle,

wherein the drive system operates in response to the drive control signal to travel within the park attraction.

2. The system of claim 1, wherein the plurality of user input assemblies are each operable to initiate acceleration or velocity at a magnitude along a different direction of travel for the vehicle.

5. The system of any preceding claim wherein the vehicle includes a plurality of passenger seats, including a user input assembly proximate to each of the passenger seats, and the drive system is a holonomic drive system adapted to move the body in any direction while riding on a driving surface of the park attraction; and
a system controller operating to

combine the control vectors from all of the user input assemblies to generate a resultant vector;

generate the drive control signal from the resultant vector;

wherein the holonomic drive system operates in response to the drive control signal to move on the driving surface of the park attraction.

6. The system of claim 5, wherein the control vectors each define a direction of travel on the driving surface and a magnitude of acceleration.

7. The system of claim 6, wherein the body includes four of the passenger seats and wherein the direction of travel for a pair of adjacent ones of the user input assemblies are offset at an angular offset of 90 degrees.

8. The system of claim 7, wherein the passenger seats have seat backs oriented to face inward toward a vertical center axis of the body of the vehicle.

12. The system of claim 5, wherein the control vectors are combined by the system controller using a 2D vector summation.

14. The system of claim 5, wherein the system controller, before generating the drive control signal, modifies the resultant vector based upon operating parameters of the vehicle, based upon game play data for the park attraction, or based on detection of an upcoming collision with an obstacle or other vehicle.

15. The system of any preceding claim, wherein the drive system comprises an omni wheel-based drive.

16. The system of any preceding claim, wherein the vehicle includes eight of passenger seats and wherein the system controller processes the user input from four predefined pairs of the user input assemblies to generate the resultant vector when the four predefined pairs each faces inward along one of the cardinal axes or each of the passenger seats faces inward along axes offset by 45 degrees. 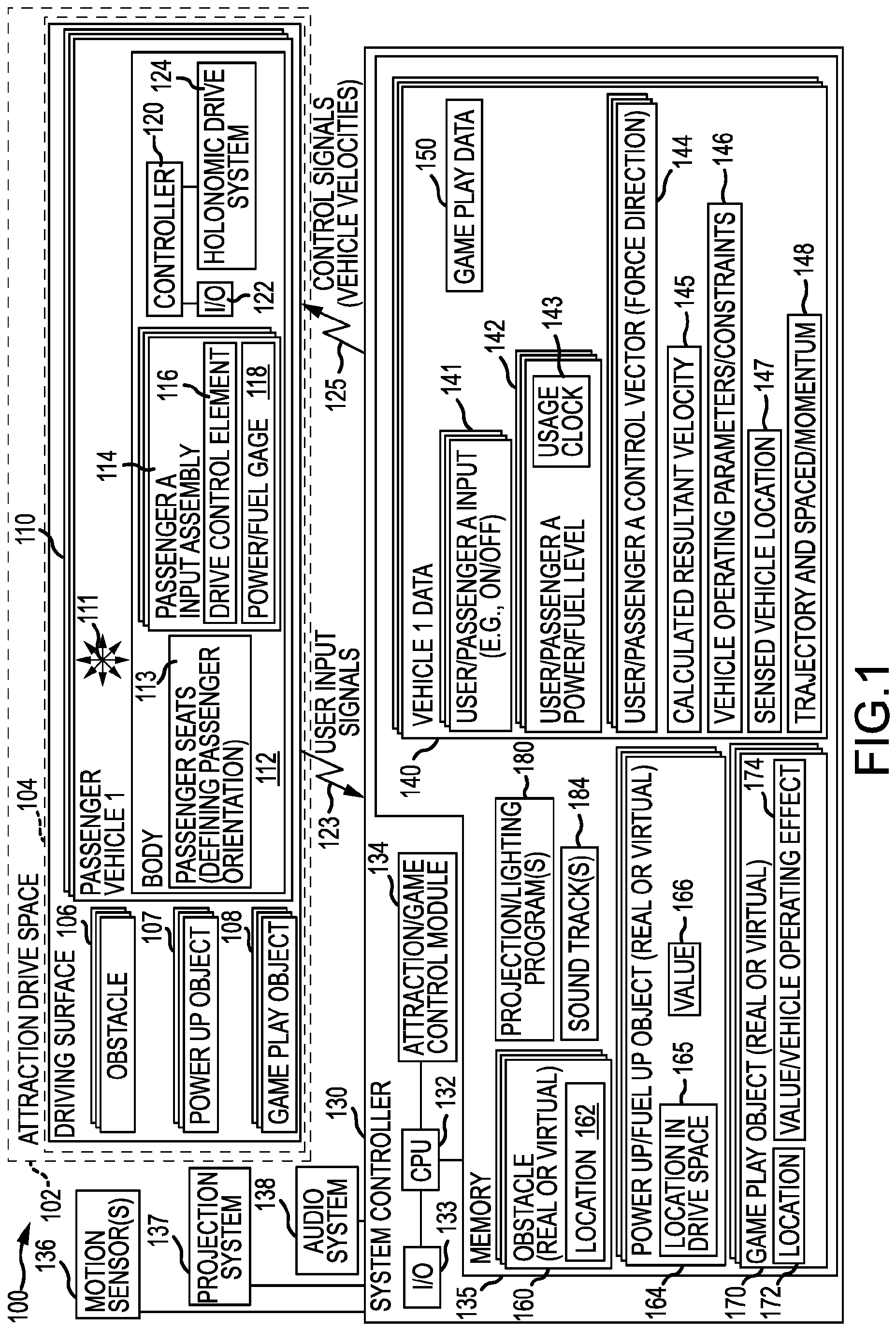 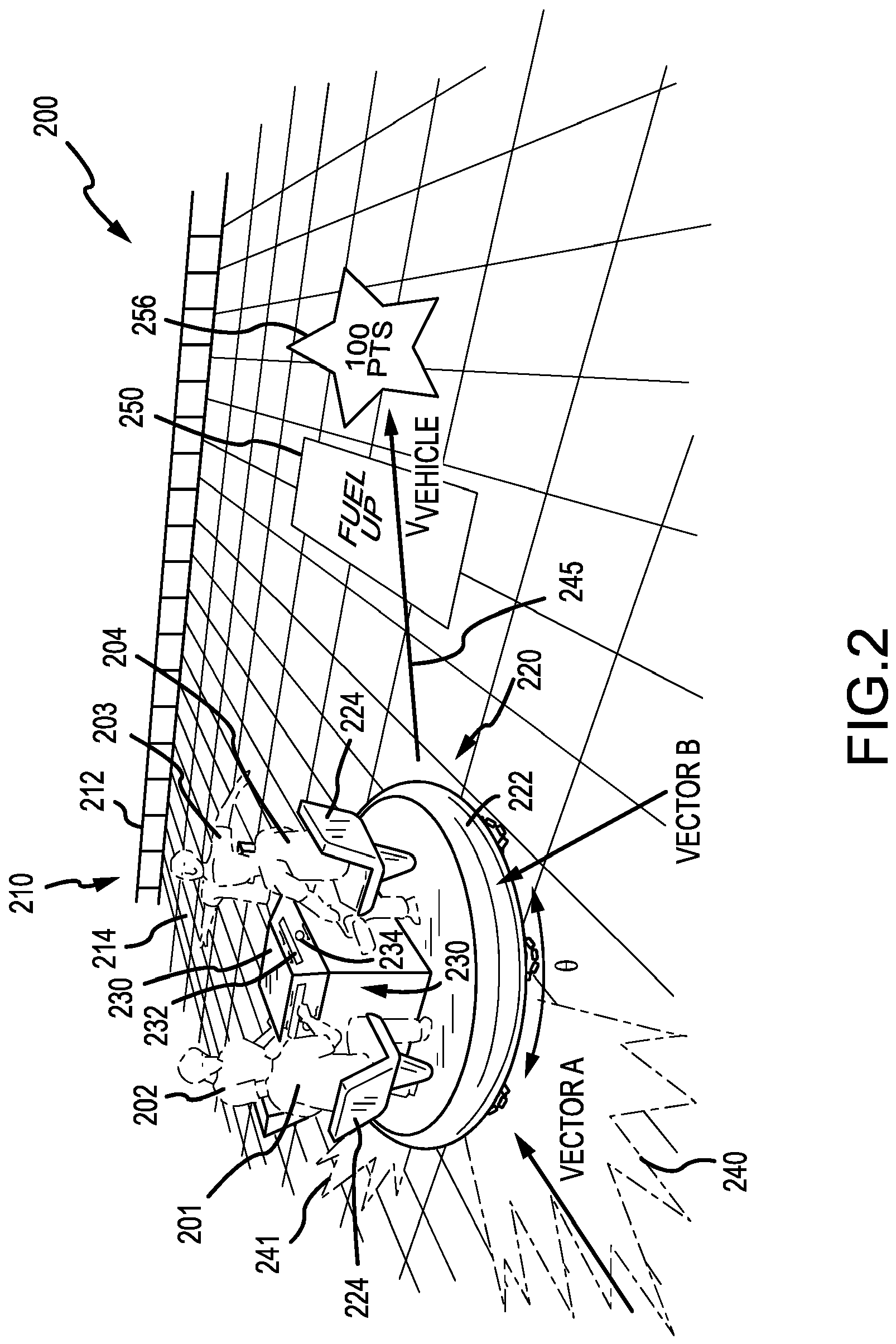 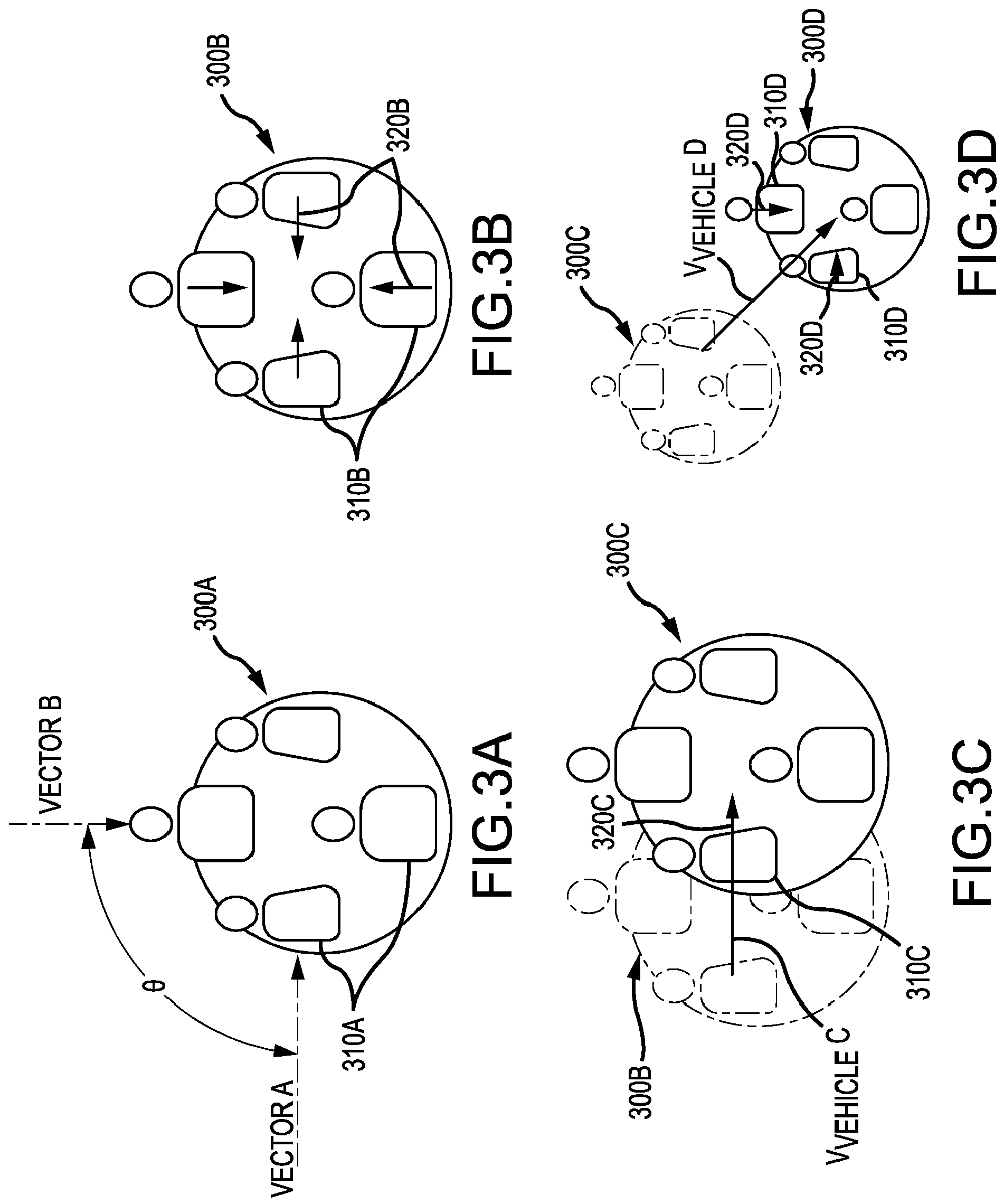 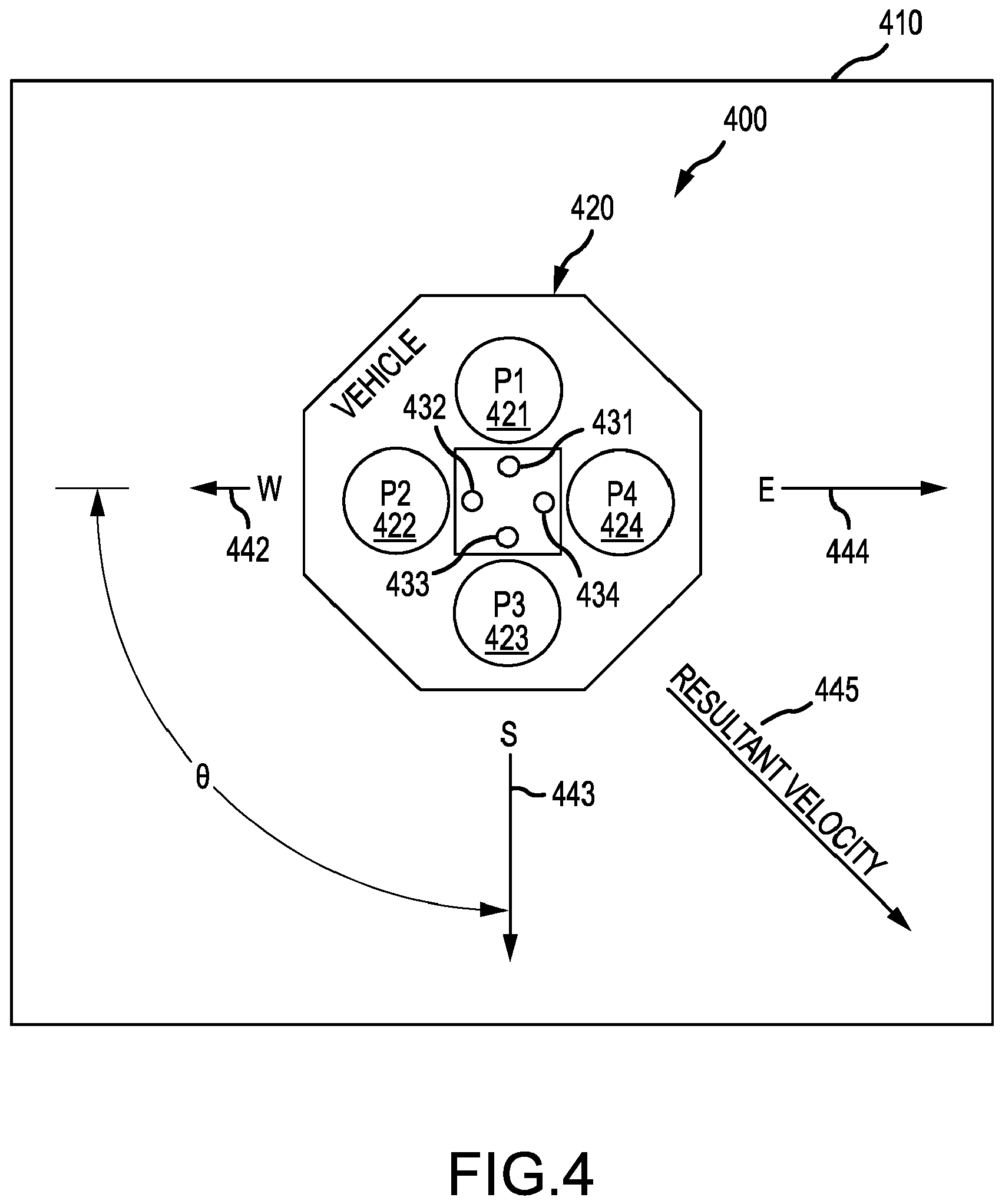 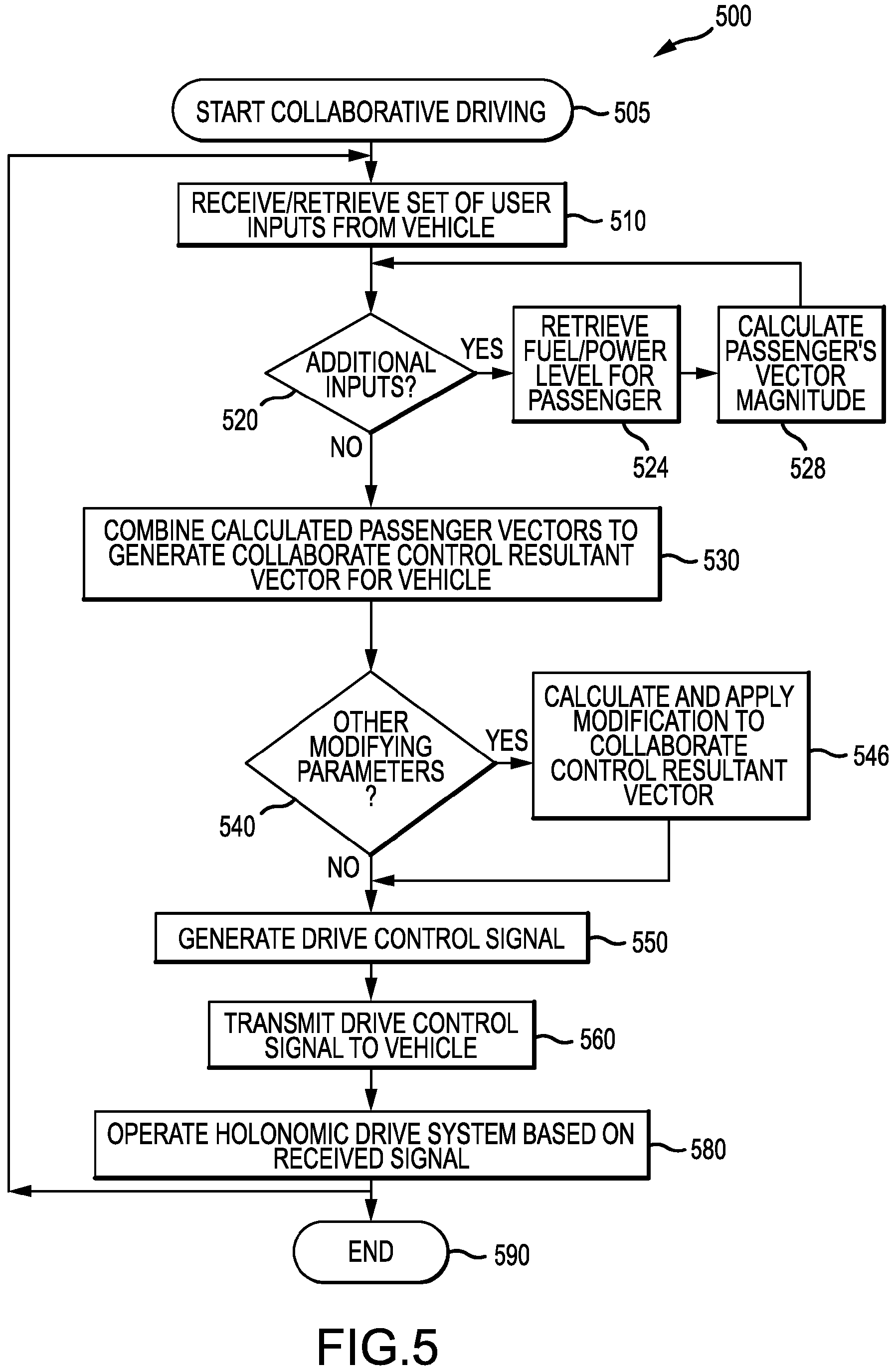 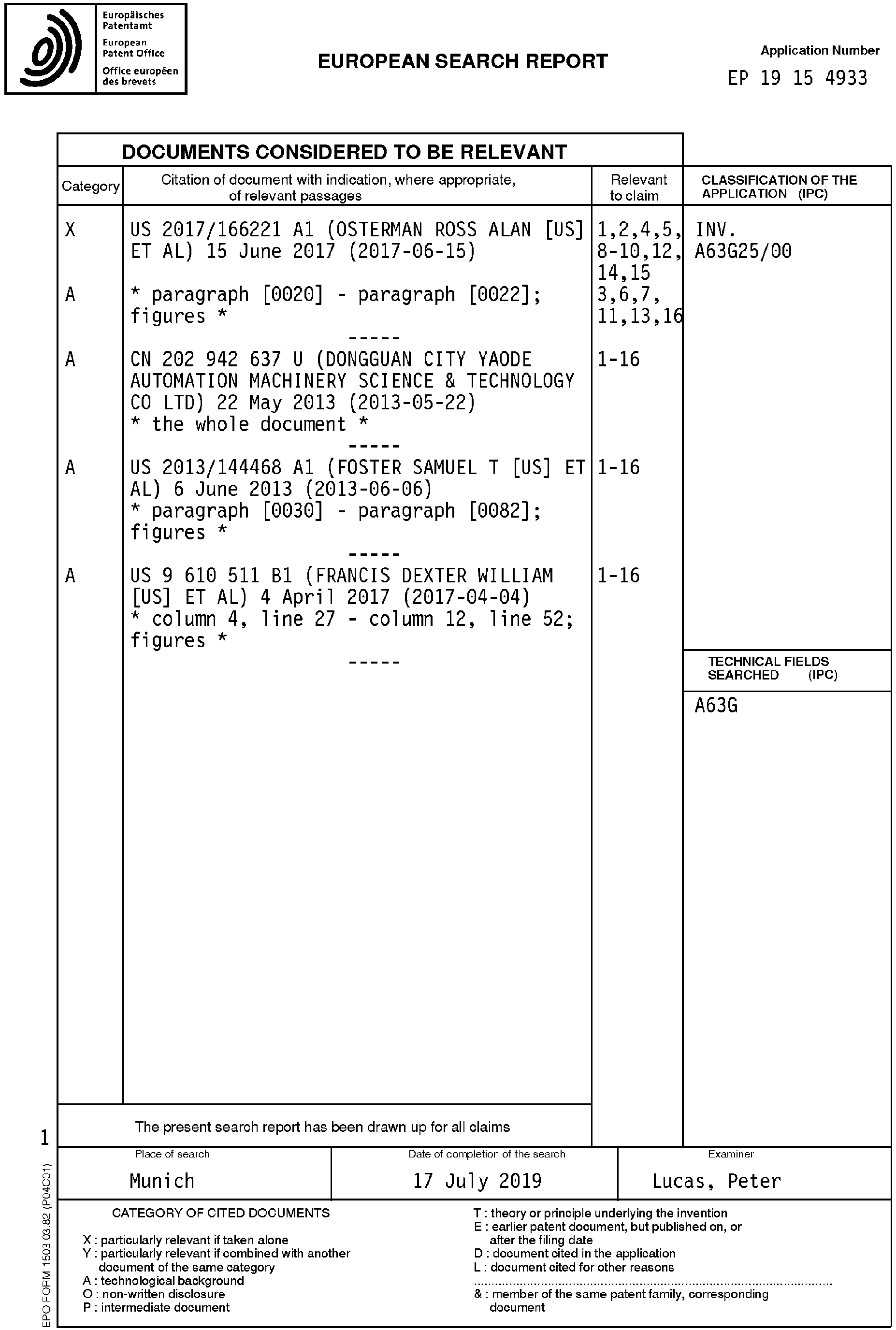 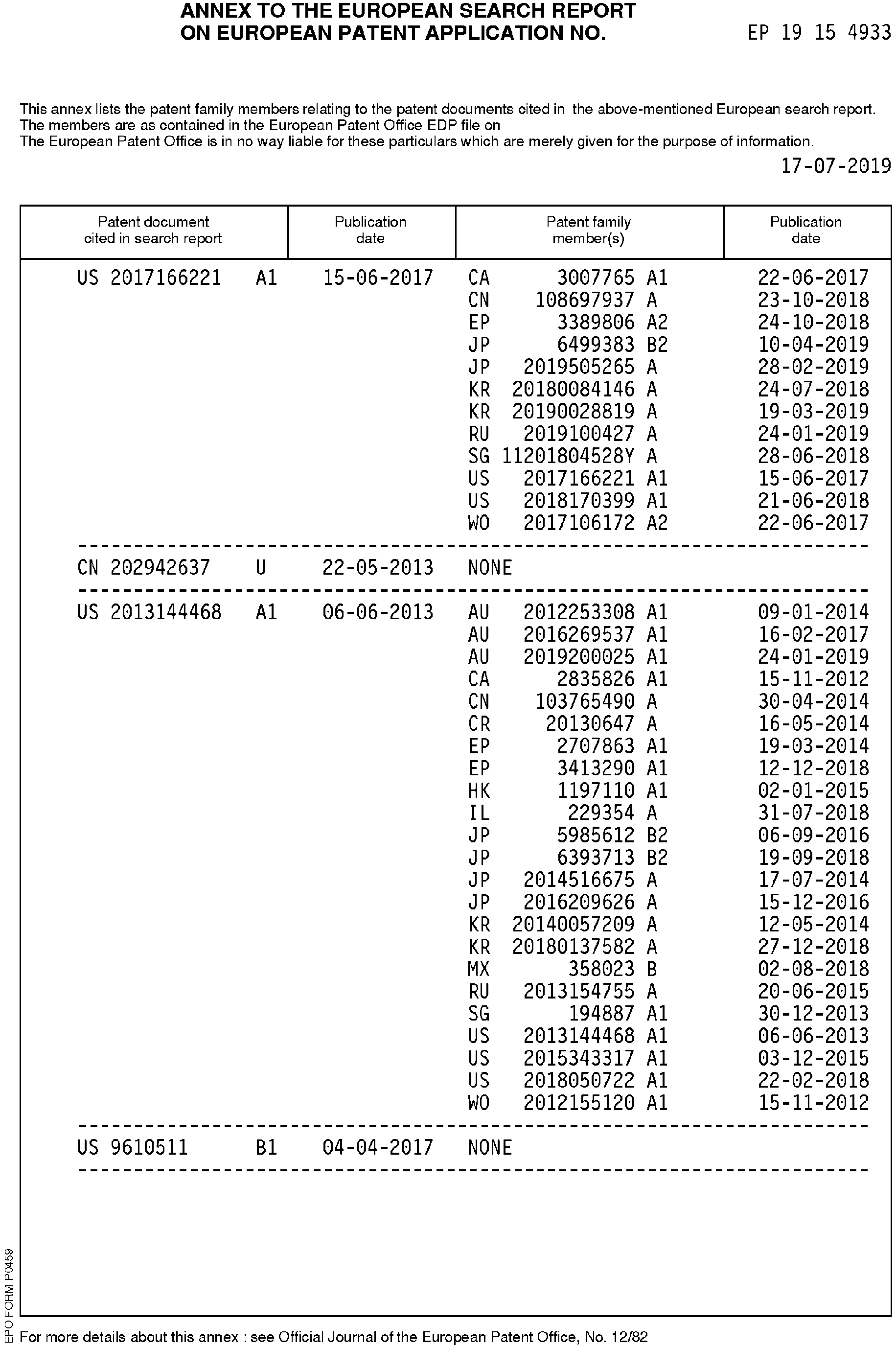