[0001] The present invention relates to footwear applied to and principally but not exclusively to infants and toddlers, and relates to physiological footwear with dynamic configuration of microparticles, preferably polymeric or of natural origin, applied in a chamber located between the mounting insole and irregular flooring with irregular layout and heel counter applied to the floor, simulating the natural soil, a factor that stimulates the activation of the musculature and, consequently, helps the normal and ideal maturation of the feet.
[0002] Footwear is aimed at the development of foot and child gait, an essential stage in foot development, and the factors that interfere with this development. It was developed after tests of materials analysis, gait analysis and electromyography of footwear and barefoot babies. In addition to the product generated, physiological footwear, a technique was developed as well as an innovative apparatus for insertion of the microparticles mentioned here.
[0003] Technology meets the concept of ergonomics brought by the Economics Research Society apud Iida (2005). Footwear are products that interface directly with the human body and should represent not only a necessary clothing and linked to customs and social status. They must originate from a study between the relationship of man and his work, equipment and environment to apply knowledge of anatomy, physiology and psychology in solving problems arising from this relationship.
[0004] Basically, the shoes are made up of subsets. According to O'Keeffe (1996) and Kohlrausch (2009), the most important basic elements in making a shoe are the shoe tree, a stylized replica of the human foot, which determines the shape of the shoe, and how the body weight will be distributed on the foot, two key features for shoe comfort. However, each part mounted on and under the shoe tree is subdivided into a series of others, having very specific features and functions. For this purpose, an anthropometric study on the foot of children from 0 to 24 months was carried out to find the measurements of the ideal shoe tree for a baby foot.
[0005] The present invention, with a totally novel technique and arrangement, brings the new shape of the shoe sole that protects the user foot, helps the standard foot scrolling, as its tip is raised, protects the ankle by playing the role of the heel counter preventing torsions. Has irregularity imitating the natural shoe sole and, therefore, aids to strengthen the muscles and improves the balance, provides high resistance, flexibility, and lightness, providing for the user high comfort, in addition to dampen the impact.
[0006] The dynamic microparticles composing the insole allow for a greater contact area of the footwear with the foot as the material is molded to the shape of each foot in every footstep, in addition to provide for a greater activation of the muscles of feet by the dynamism thereof, preventing future abnormalities due to poor skeletal muscle development of feet. In addition, the material of the upper, and the insole top allows for sweat absorption.
[0007] In the present state of the art, the patents No. PCTBR/2013000559, US4524539A, DE3833231C2, BR 202012009273-0 U2, CN203194703U, CN201420370638U, CN201520013085U, US2006644005A, JP200839064A, CN200920073368U, CN201120401373U, it was evidenced that the vast majority of footwear is based on simple technologies, and intensive labor, or only on subdivisions; that is, in simplified processes that make the product more attractive in terms of price to the detriment of the concern to develop products that solve the ergonomic problem in the stage of foot development, called maturation of the foot, both in the phase of rapid development, that is, in the first six months of independent walking, and in the slow development phase, up to 7 years old.
[0008] In short, existing footwear is based on little or no ergonomic and anthropometric study, which may cause abnormalities, such as "flat feet". It should be found that, in the current state of the art, most of the insoles are formed by elastomeric materials, such as cut plates or thermoformed materials already in the final shape.
[0009] Unlike the technique used herein, and non-existent in the market, which injects the microparticles in a chamber located between the mounting insole and the shoe sole. Such fact is to minimize the impact when walking, especially to protect the heels, sometimes in addition to minimize heat, not the correct formation and maturation of feet. The irregular arrangement applied to the sole extends to the area of the heel, functioning as a heel counter.
[0010] The present invention has the following advantages:
[0011] The object of the present invention is described with reference to its preferred embodiment, shown in the accompanying drawings, in which:
[0012] According to Figures 1 to 5, the present shoe is composed of comfort insole (1) composed of loose and dynamic microparticles (1a) applied in a chamber between the insole (4) and the sole (2) consisting of polymers, in the present case PE and OS, which presents an irregular disposition, heel counter (3) applied to the sole (2) making the footwear dynamic and irregular, a factor that simulates gait in natural soil, providing stimulation and activating the musculature of the feet, assisting in their natural and ideal formation, the upper (5) being of varied shape. 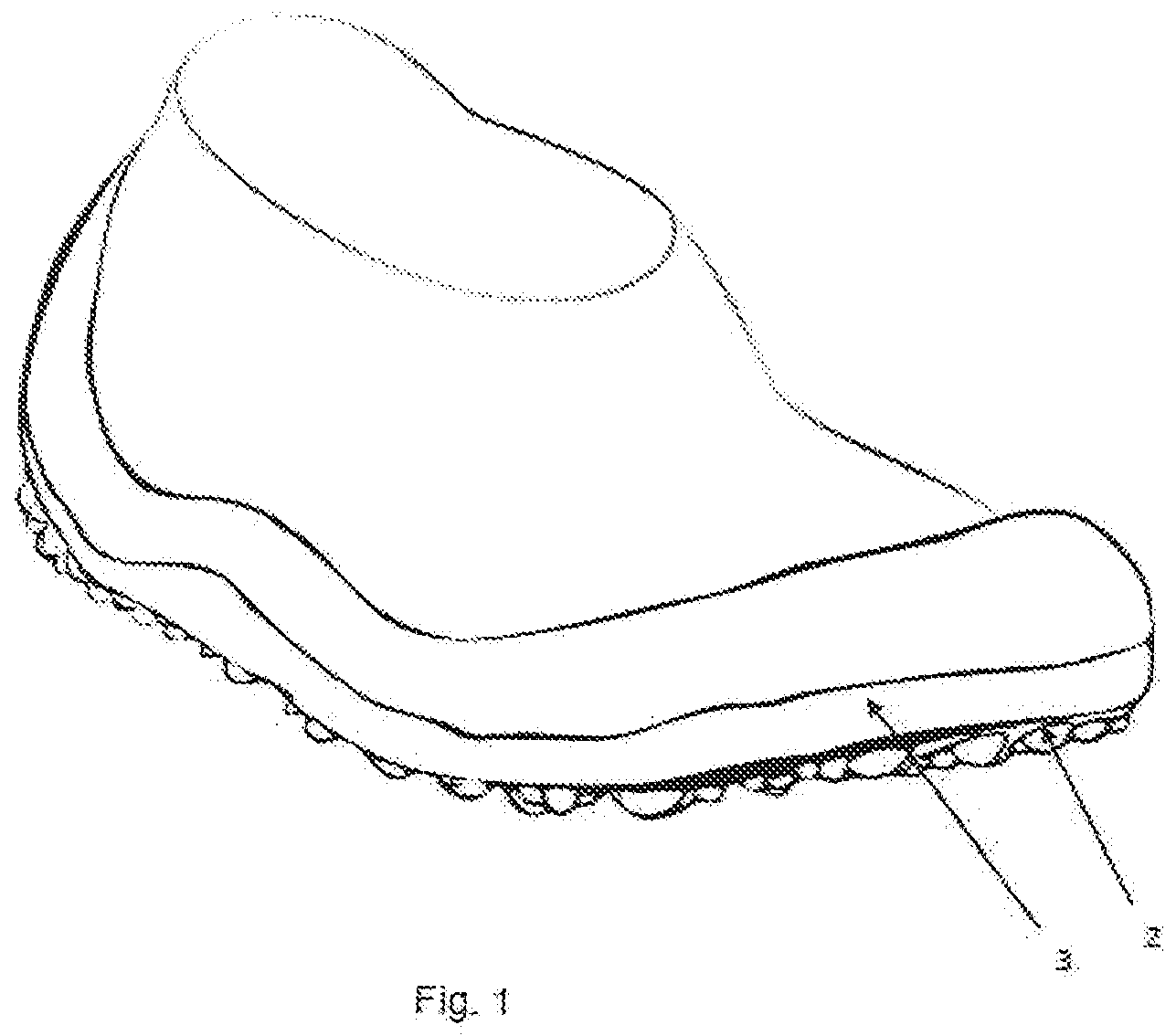 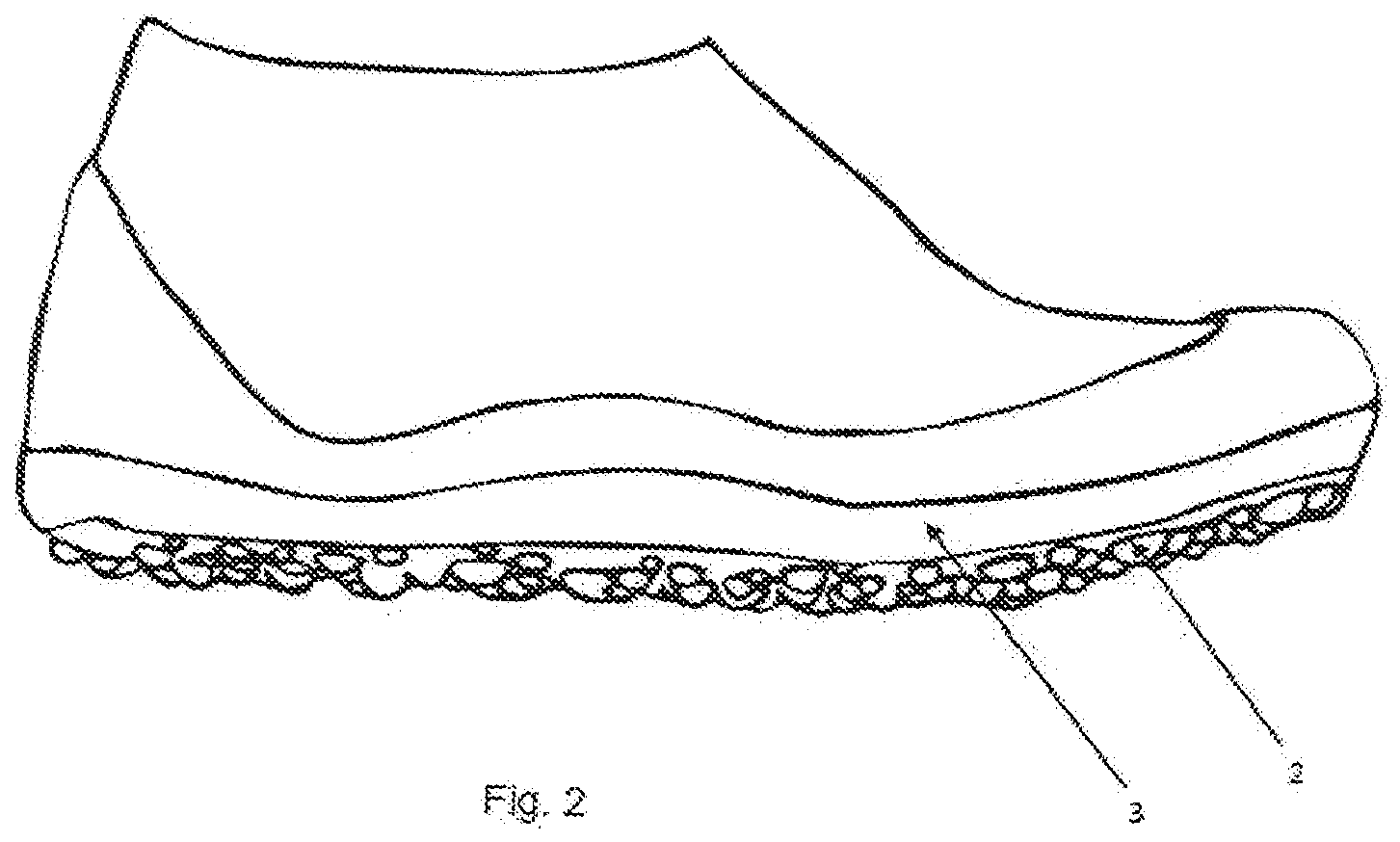 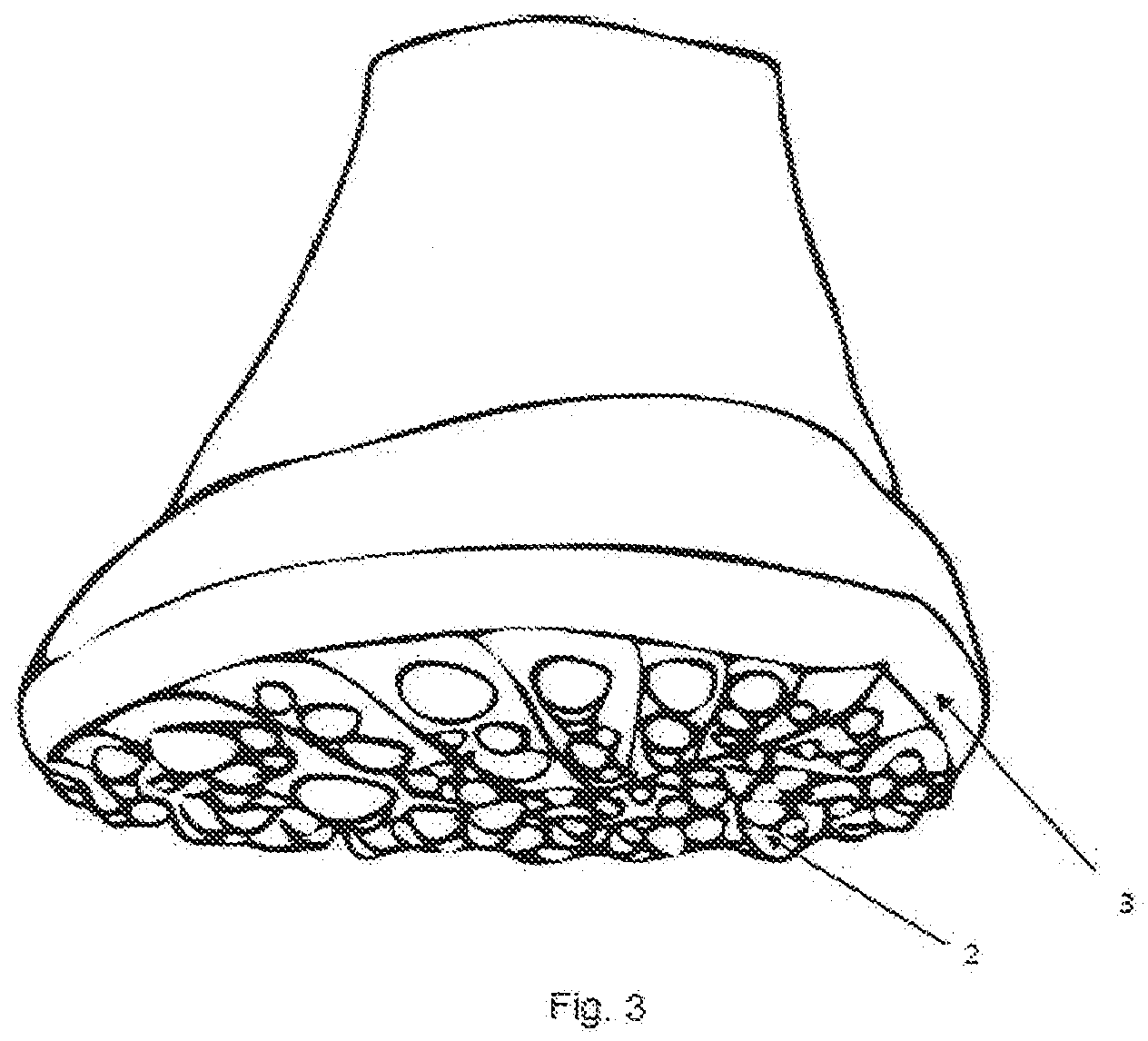 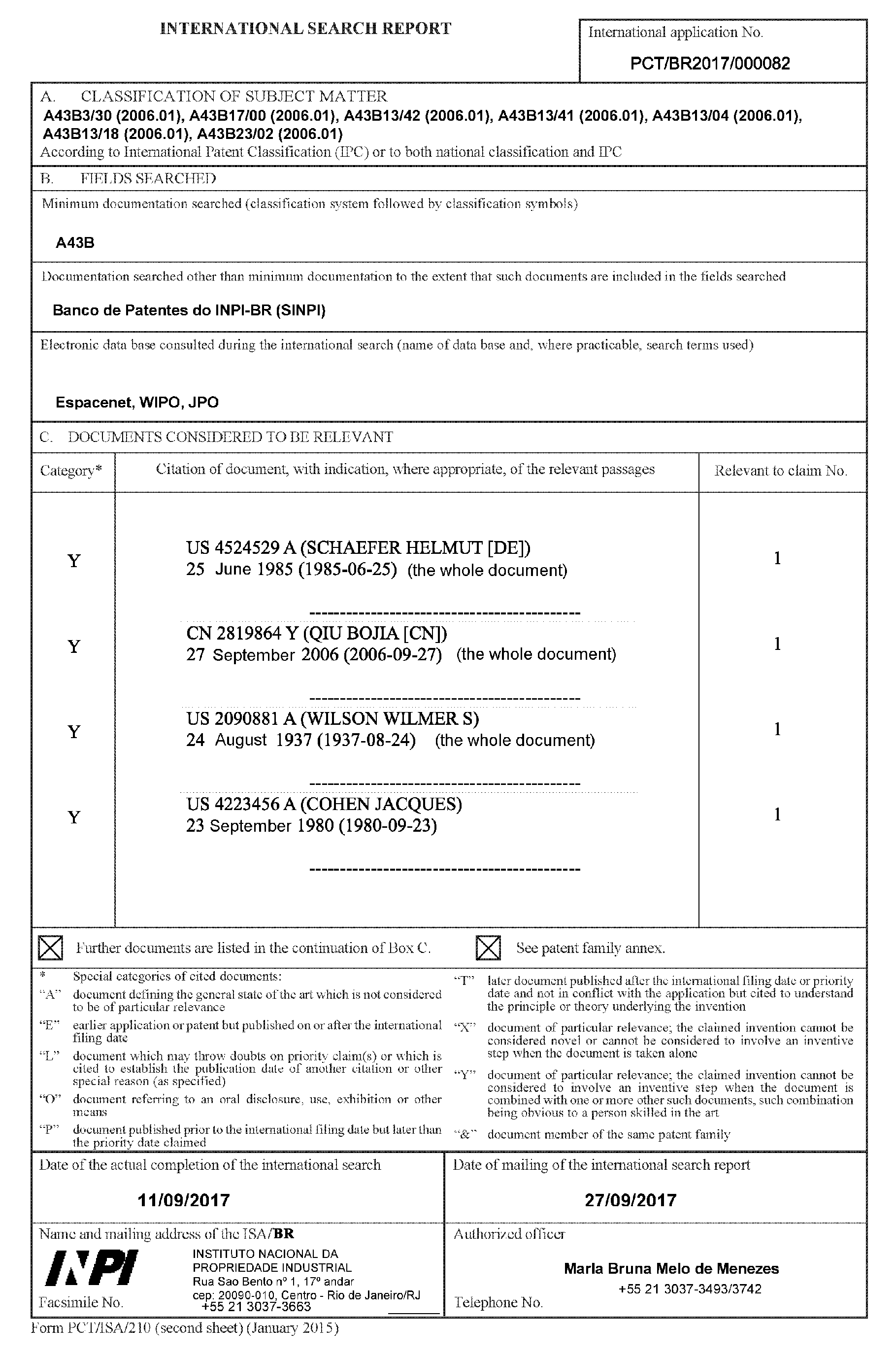 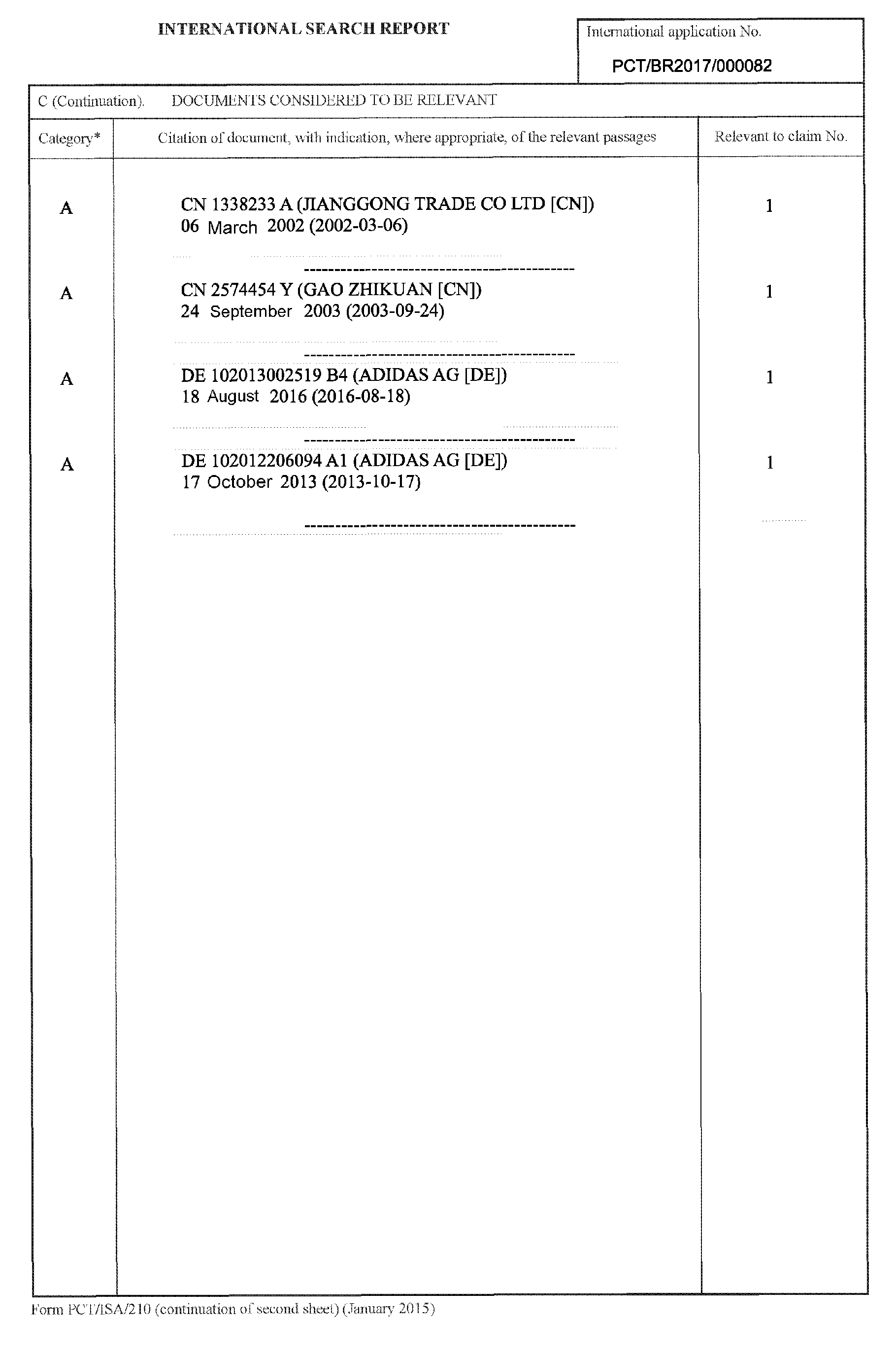 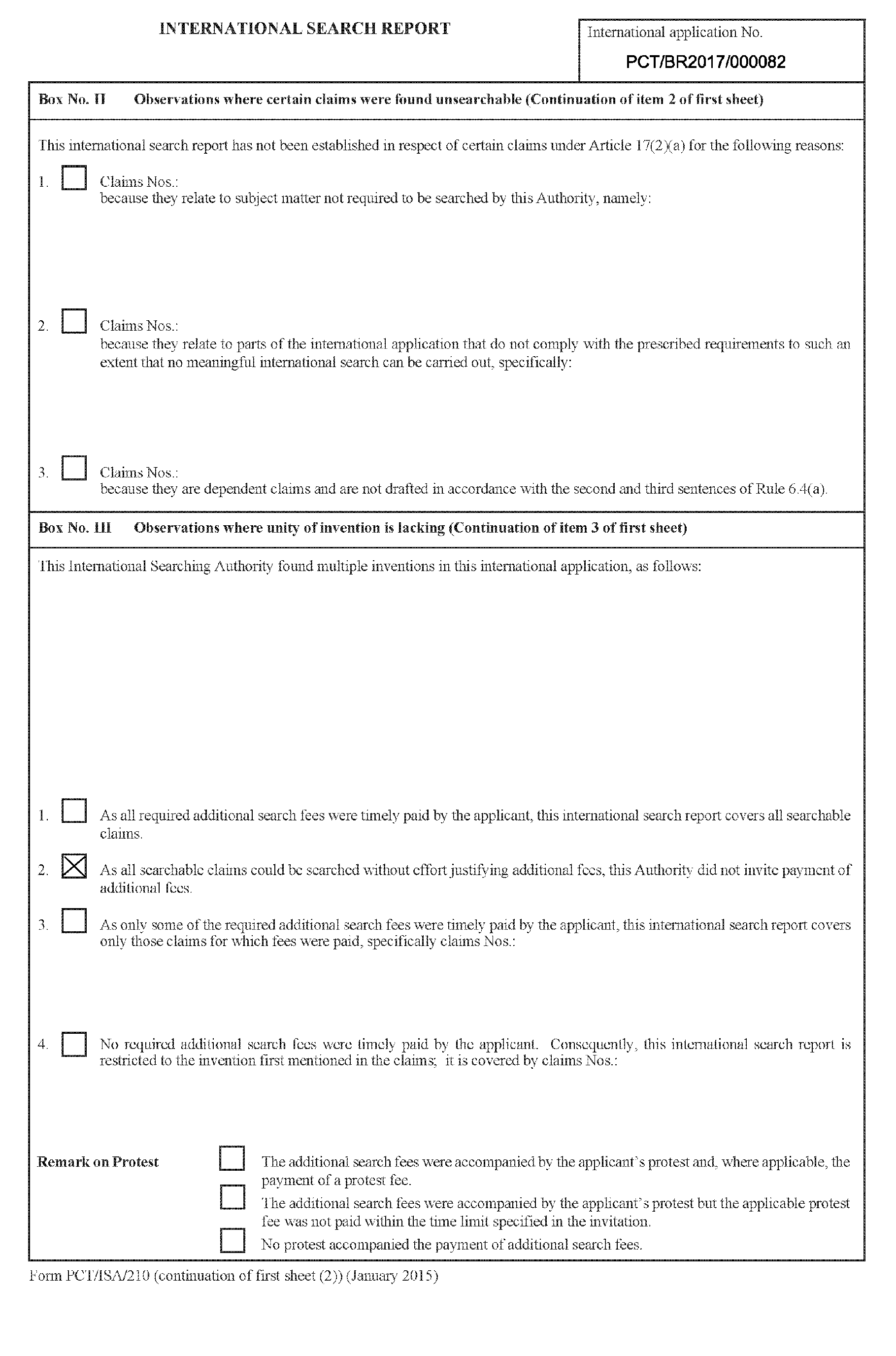 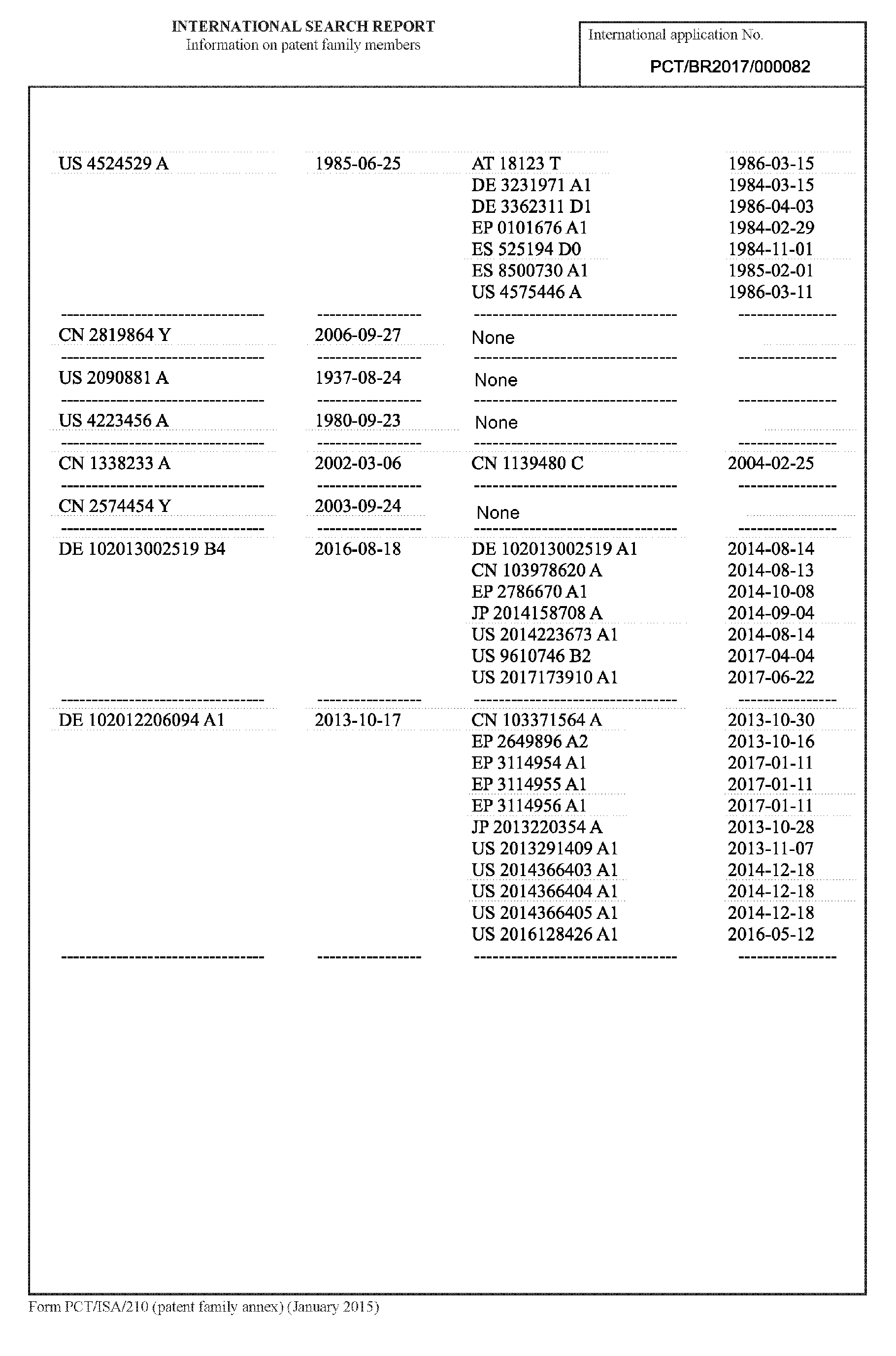