[0001] Embodiments of the present invention provide for ion exchange membranes and processes for their manufacture. The electrodialysis membranes described herein combine low resistance and high permselectivity which make them highly effective in water desalination applications, particularly in seawater desalination. The ion exchange membranes described herein are made by polymerizing one or more monofunctional ionogenic monomers, optionally a neutral monomer with at least one multifunctional monomer in the pores of a porous substrate.

Figure 1 shows the relation between volts/cell pair and total dissolved solids in the feed solution for the test described in Example 7.

Figure 2 shows the construction of the membrane test cell and the reference electrode.

Summary Of the Invention

[0076] The voltage required for these membranes at various salt concentrations is shown in Figure 1. It can be seen that the example membranes require lower voltage than the commercial membranes at the same current density, i.e., are more energy efficient. This is particularly evident at salt concentrations below 5000ppm. The low resistivity at comparable apparent permselectivities is strong indication of a lack of random defects.
[0077] In related example, an experimental production run of one embodiment of the anion membrane of the present invention, using thinner substrate, generated eighteen samples to determine the presence of defects. Apparent permselectivity was used to measure defects in the membrane samples. The data below show a low standard deviation in apparent permselectivity, indicating the absence of random defects.

[0078] The results discussed for Example 6 are not limiting to the formulations and other process conditions described, but are related here to show one example of exceptional electrodialysis membranes having been developed as a result of prolonged and difficult experimental research.
[0079] Further improvement was surprisingly found (data in Table 17) by adding a non-charged neutral monomer to the polymerization formulation. Hydroxyethyl acrylate, hydroxyethylmethacrylate and vinylbenzyl chloride are preferred neutral monomers. The inventors believe that these monomers and similar monomers moderate phase separation and produce a more homogeneous crosslinked polymer. Other example monomers are, for example, but not limited by these examples, methyl methacrylate, ethyl methacrylate, and hydroxypropylacrylate. Table 17 of Example 7 gives results for experiments done with several formulations using two ionogenic monomers (VBTMAC and TMAEMC) and hydroxyethylacryate as the neutral monomer, with divinylbenzene used as crosslinker monomer. The results show consistent values of resistivity below 1 and down to approximately 0.5 Ω-cm2. Permselectivities were in the range of 92% to 95%. The preferred support was APorous H6A.
[0080] The results further show the importance of choosing the correct support membrane as the APorous support membrane consistently produces membranes with resistivity values less than 1.0, whereas both the Teklon 3 and Solupor16P10A supports give values above 1.
[0081] The inventors control membrane properties by balancing the amount of crosslinking formed in the polymerized membrane. In general, a high level of crosslinking gives high permselectivity with concurrent high resistivity. Conversely, too low a crosslinking content will give low resistivity, but low permselectivity. Without desiring to be limited by the following, the inventors also believe that several properties of the polymerization formulation affect the properties of the resultant membrane. The use of a microporous substrate is believed to improve membrane properties by reducing the microheterogeneity formed polymer. This is believed due to the constrained crosslinked polymer formation in the porous volume, possibly enhanced by the surface effects of the hydrophobic pore walls. In the polymerization of an ionogenic monomer (hydrophilic) and a hydrophobic crosslinker, the tendency of the hydrophobic and hydrophilic regions will be to separate and aggregate. Even with hydrophilic crosslinkers, such as ethyleneglycoldimethacrylate, the inventors see evidence of phase separation when a film of solution is applied to a dense substrate film, for example, a polyethyleneterepthalate film, as the applied solution becomes cloudy as solvent is removed. The inventors believe that the improved combination of low resistivity and high apparent permselectivity is in part due to the retarded motion engendered by the microporous dimensions of the pores and possibly aided by the hydrophobic attraction of the pore walls.
[0082] The conclusion shown by these examples is that membranes with goal properties of less than 1.0 Ohm-cm2 or more preferably 0.5 Ohm-cm2 and greater than 90% permselectivity can be made. For CEM's, permselectivities greater than 99% have been shown with similar goal resistivities. The experimental work shows that proper choice of support is important, but that different formulations combine differently with supports so that a general choice cannot be made. Process variables such as soaking time are also important. A practitioner skilled in the art of membrane development and particularly ED membrane development will be able to use these examples and the teachings herein to make membranes having goal properties with the use of standard experimental procedures and without undue experimentation

[0083] The following examples are meant to illustrate the extent of effort expended in developing the subject membranes. The finding resulted in showing that ion exchange membranes having the desired properties could be made and that improvements are possible with further experimentation. These results are meant to be illustrative and to indicate developmental directions to those skilled in the art of membrane development and associated arts and not to be limiting as to the extent of the matter disclosed herein. Properties and suppliers of the supports used are given in Table 1 below.
Table 1 Support materials

[0085] Membrane coupons were made up by the aluminum boat method described in the Detailed Description section. Soaking time, the time that the substrate was in the formulation before polymerization was initiated, was varied. Resistivity and permselectivity results are given in Table 4.
TABLE 4. Example 1 results

[0087] Membrane coupons were made up by the aluminum boat method described in the Detailed Description section. Soaking time, the time that the substrate was in the formulation before polymerization was initiated, was varied. Resistivity and permselectivity results are given in Table 2.
TABLE 7- Example 2 results.

[0088] This batch of 2-SEM/EGDM/NMP@40%NP formulation showed behavior consistent with solution instability which appeared after overnight soaking.

[0095] This set of samples was made with the formulation below in the usual manner. Results are shown in Table 9.
Table 9 Formulation for Example 4
TABLE 10 Example 4 results

[0096] A related experinment was conducted with a neutral monomer HOEMA (Hydroxyethylmethacrylate). The solution composition is given in Table 9A. Membrane results are given in Table 10A.
Table9A
Table 10A

[0097] A series of experiments were conducted varying the crosslinker type and support used to make anionic exchange membranes. Results are shown in Table 11. All formulations were 16.1% TMAEMC, 6.8%DPG, 3.6%N-propanol, 18.8% cross-linker, and 0.6% VAZO. The formulation in the Coating Formulation/Support column is named for the cross-linker used. 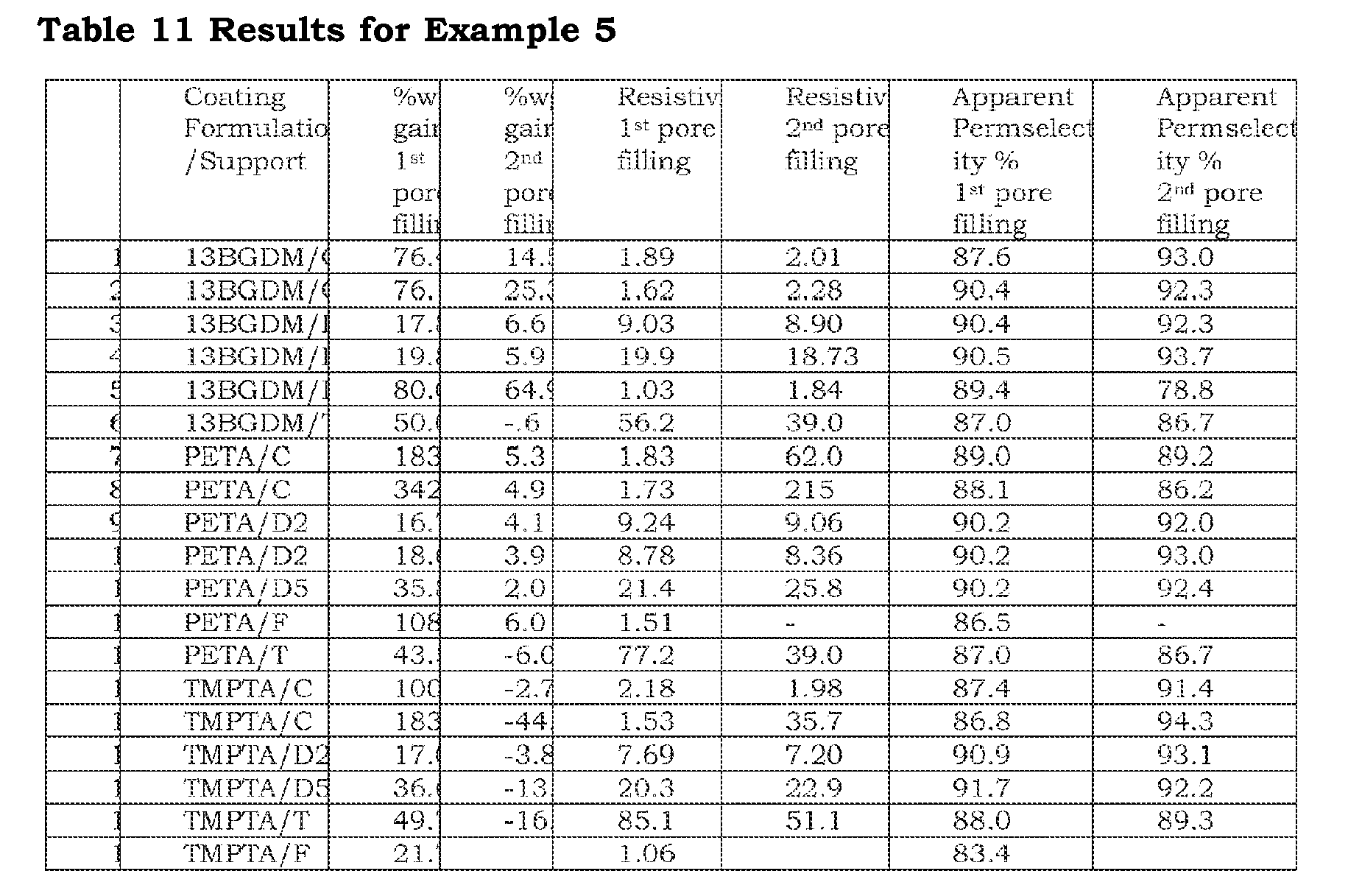 [0098] A series of further experiments were conducted on several supports utilizing formulations of varying monomer/crosslinker combinations. Formulation details are given in Table 12.
Table 12 Further results

[0099] Formulations for the examples of Table 12 are given below. Table 14 has the abbreviations used. 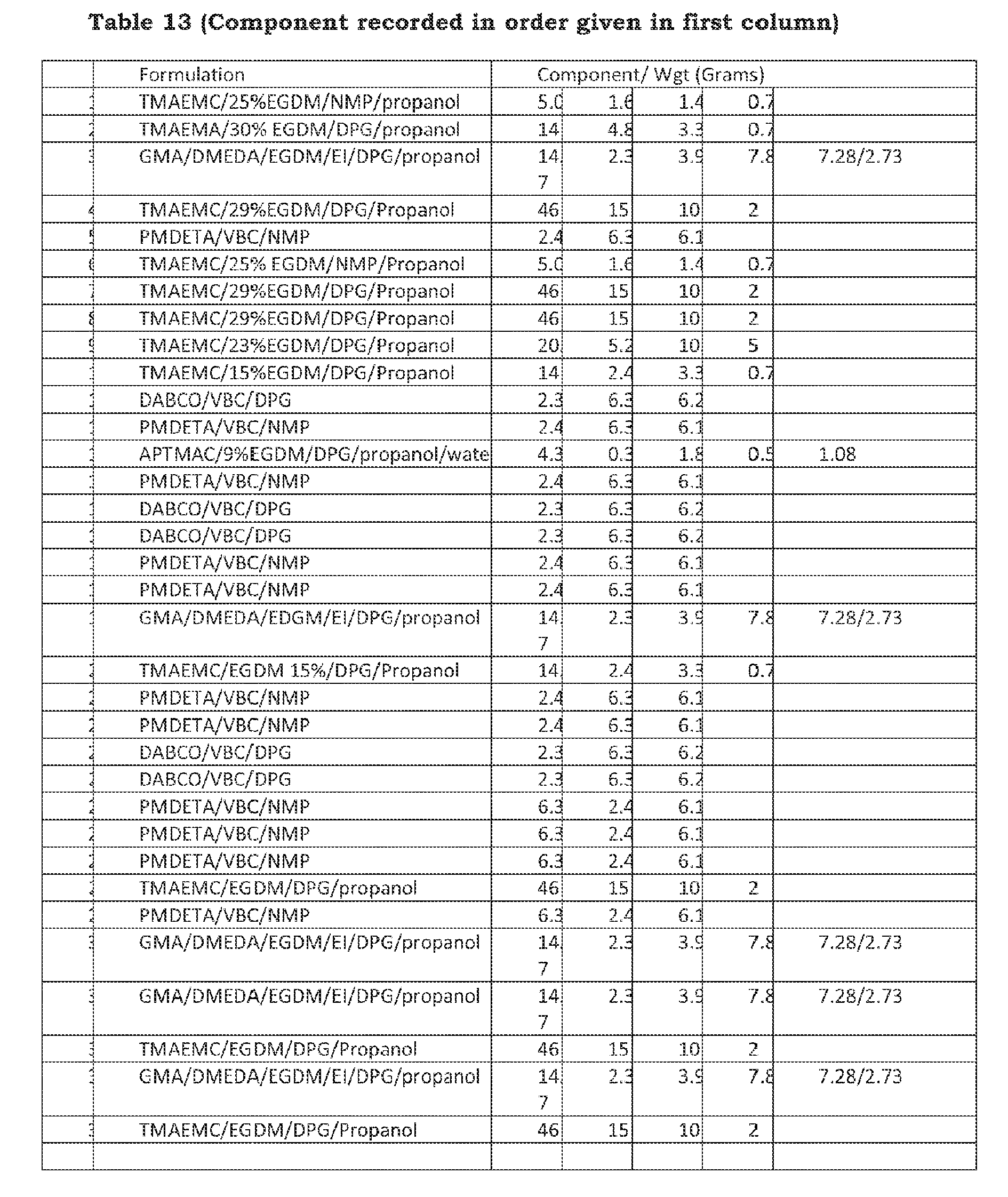 [0100] Further evidence of essentially defect-free membranes is shown in the comparison of this Example. Membranes made according to the description described herein were compared to a thicker (120-160 µm) commercial electrodialysis membranes. The formulation used for these membranes is given in Table 14.
Table 15 Results and discussion of Example 6

[0101] These membranes were tested in a ten cell electrodialysis module at a current density 88 A/m2. Results shown below illustrate the lower resistivity at comparable apparent permselectivities. The feed solution made up with NaCl, which has been found to be a good laboratory stand-in for seawater. 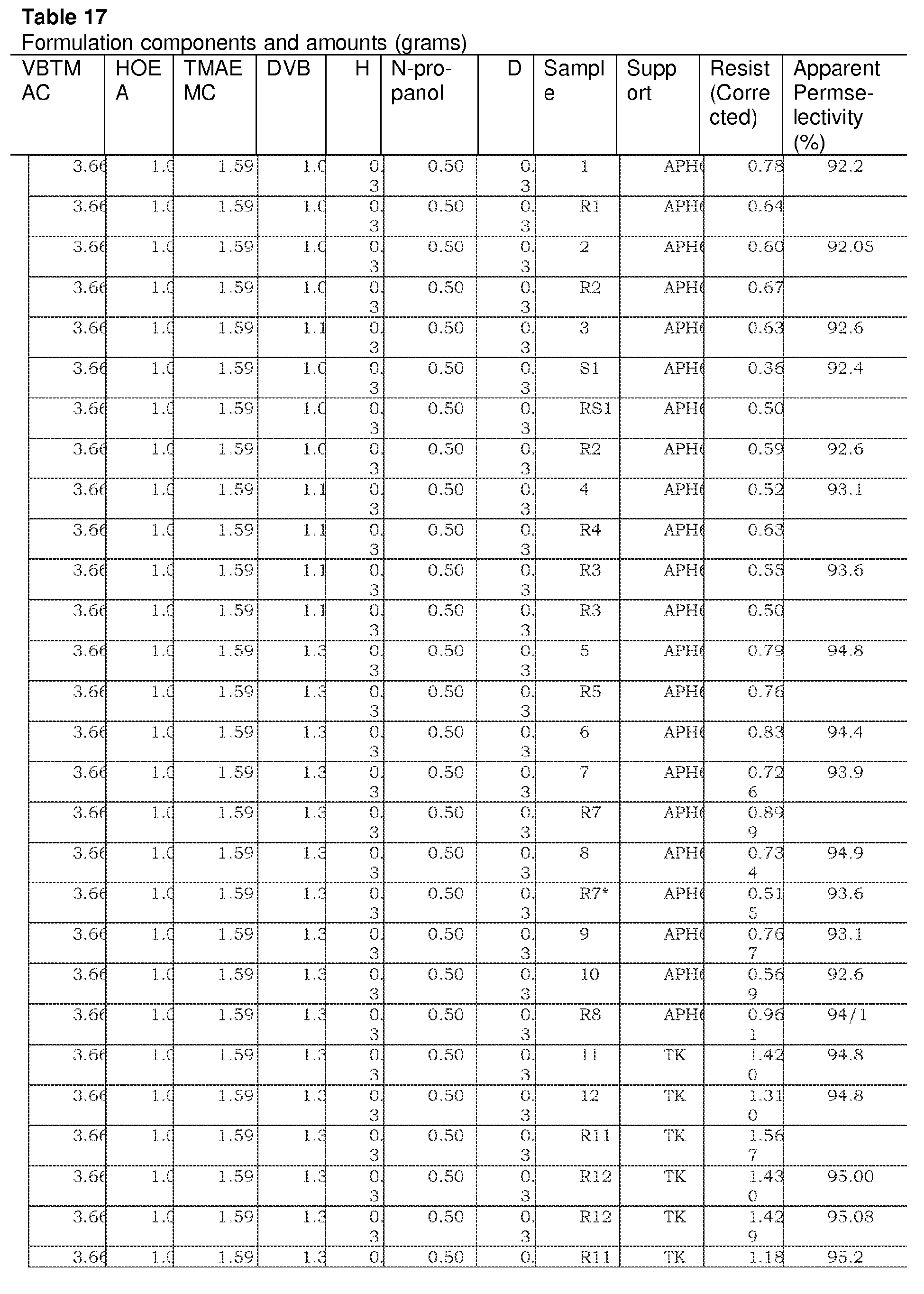 [0106] The membrane resistance and counter ion transport number (permselectivity) can be measured using an electrochemical cell. This bench top experiment provides us with a very effective and quick experiment using a small piece of sample. The equipment and procedure are described here.

[0107] The Solartron 1280 electrochemical measurement unit enables us to apply a current between the two platinum electrodes on the two sides of the cell and to measure the voltage drop across membrane. It has 4 connectors: work electrode (WE), counter electrode (CE), Reference electrodes (RE1 and RE2). The CE and WE are used to apply current and RE1 and RE2 to measure the voltage drop.

[0108] Reference electrodes (see the insert in figure 1) used for membrane characterization are made in R&D lab. ¼" glass tubing is softened, then bent and drawn to the form shown. A porous plug is inserted in the tip to control solution flow to a low rate.
[0109] Silver/silver chloride wire is freshly made for each day's testing. A current of 2-3 mA was supplied and controlled by a power supplier and an ampere meter to a platinum wire cathode and silver wire anode immersed in a 0.1N HCl solution. After several minutes, the sliver wire starts to turn black, indicating the formation of AgCl layer on the surface. The solution used inside the reference electrode tubing is 1.0M KCl solution. Since the solution will leak through the porous tip, constant addition of KCl is a necessary (∼every 20 min) during experiment.

[0110] Figure 2 shows the detailed electrochemical testing cell 10 construction used for the experiment to measure resistance and counter ion permselectivity of the membrane. The membranes are cut into disc using a die cutter. The reference electrodes are used to monitor the voltage drop across the testing membrane 14 and the two platinum discs 16 are used to provide a current through the membrane. The cylindrical path of the cell 10 has a cross section area of approximately 7.0 cm2

[0111] All the solutions need to be prepared with quantitative level as indicated by their significant figures. These includes 0.500N NaCl, 1.0N HCl and 1.0N NaOH (caustic, using plastic container or volumetric flask). The 0.5N Na2SO4 is used to feed the electrode compartments without evolution of chlorine gas.

[0113] The measurement procedures are:

Where V is measured voltage by the reference electrodes, R is gas constant (8.314 Joule•K-1•mole-1) T is Kelvin temperature of solution, F is Faraday constant (96480 coulomb/mole) and aR and aL are concentration (activity format) of the solution on the two sides of the membrane in the cell.

1. An ion exchange membrane for electrodialysis comprising a microporous membrane support having a porous first side and
a porous second side and a continuous porous structure comprising pores having a size 0,05 microns to 10 microns extending from said first side to said second side; and
a crosslinked ion transferring polymer completely filling said porous structure, said polymer formed in the porous structure and comprising the polymerization product of
at least one hydrophilic ionogenic monomer and a multifunctional crosslinking monomer, wherein the crosslinking monomer is hydrophobic.

2. The ion exchange membrane of Claim 1 having a permselectivity of greater than 90%.

8. The ion exchange membrane of Claim 7 wherein the crosslinker is ethyleneglycoldimethacrylate.

10. The ion exchange membrane of Claim 9 wherein the neutral monomer is hydroxyethylacrylate or hydroxymethacrylate.

11. The ion exchange membrane of Claim 6 wherein the membrane has a resistivity not greater than about approximately 0.5 Ohm-cm2.

14. The ion exchange membrane of any of the preceding claims wherein the membrane has a resistivity not greater than about approximately 1.0 Ohm-cm2.

15. A process for producing an ion exchange membrane in accordance with any of the preceding claims capable of use for electrodialysis comprising;
choosing a porous structure,
saturating the porous regions of the structure with a solution comprising at least one hydrophilic ionogenic monomers, optionally a neutral monomer, and a hydrophobic crosslinking monomer
removing excess solution from the surfaces of the structure while leaving the porous volume saturated with solution,
initiating polymerization by the application of heat, ultraviolet light, or ionizing radiation, optionally in the absence of substantially all oxygen, to form a crosslinked ion transferring polymer completely filling the pores of the structure having a size of 0,05 microns to 10 microns. 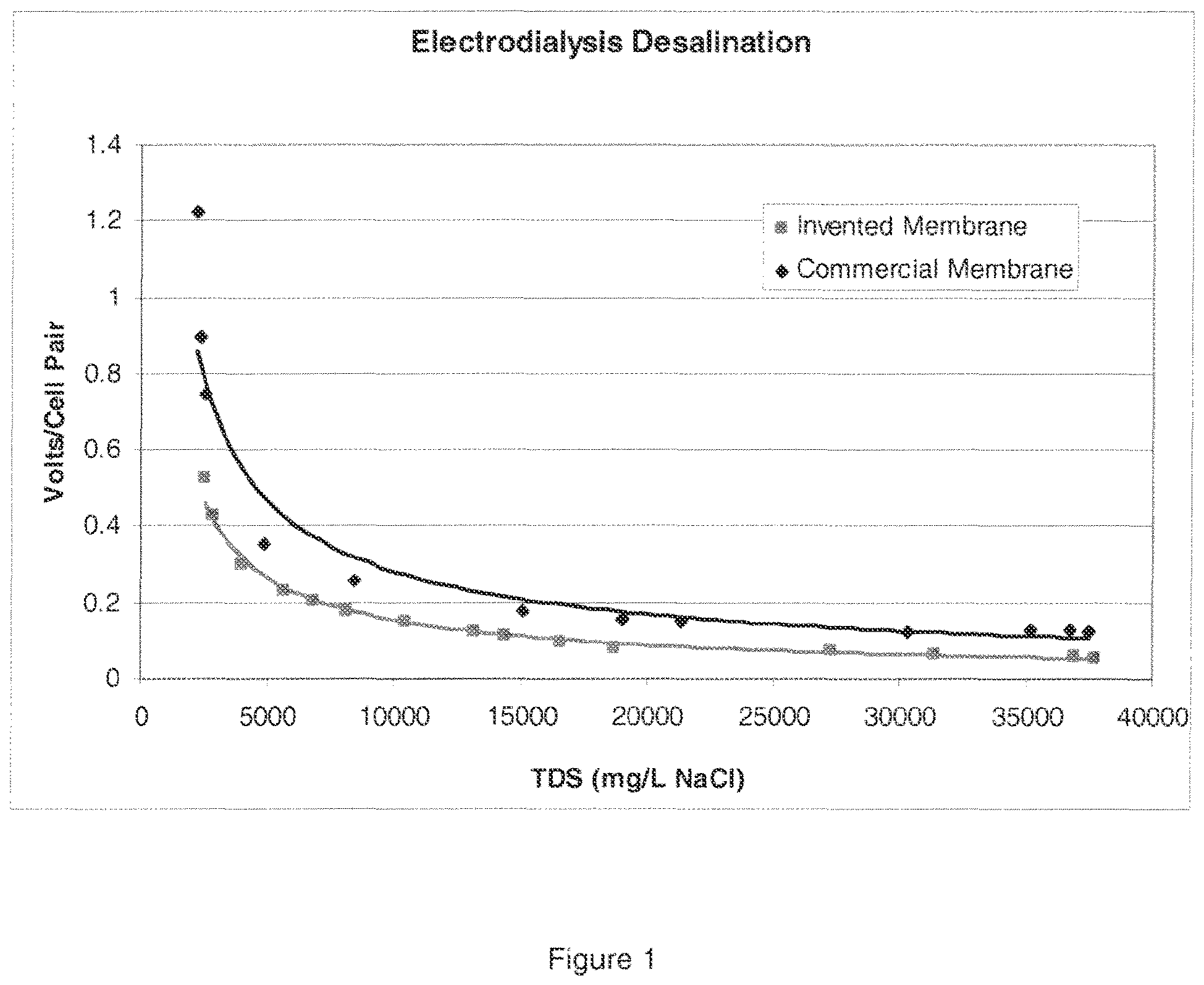 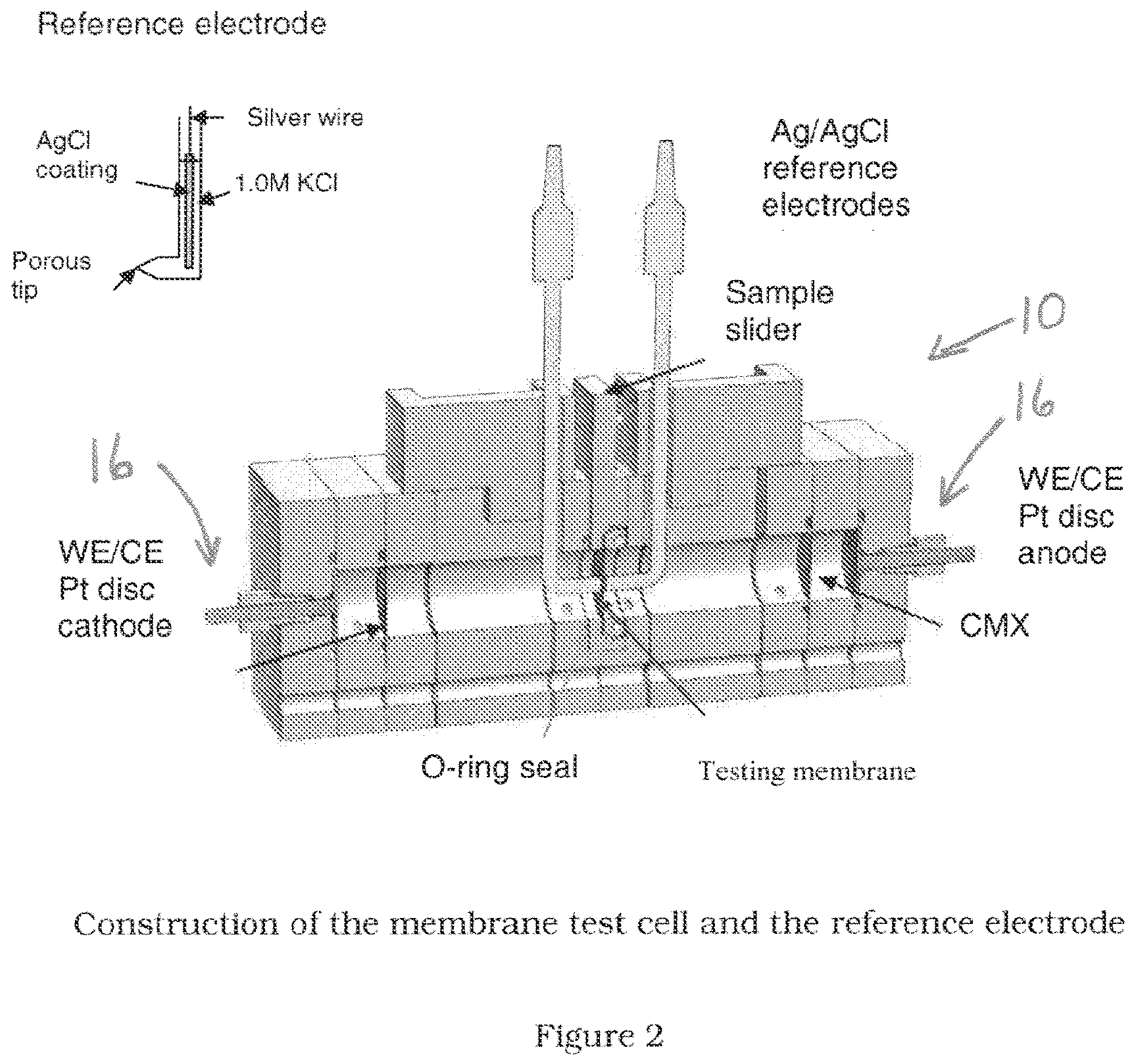 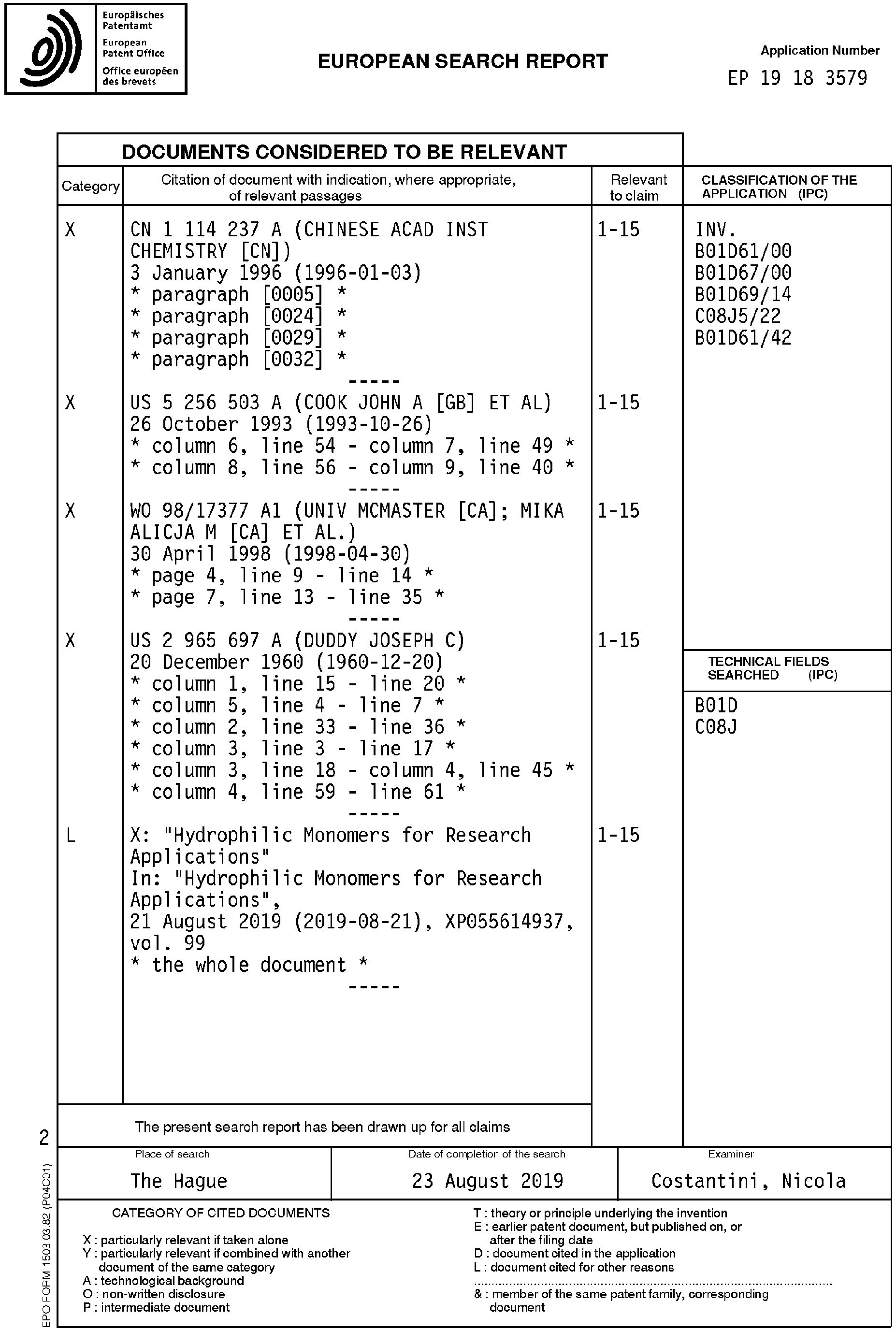 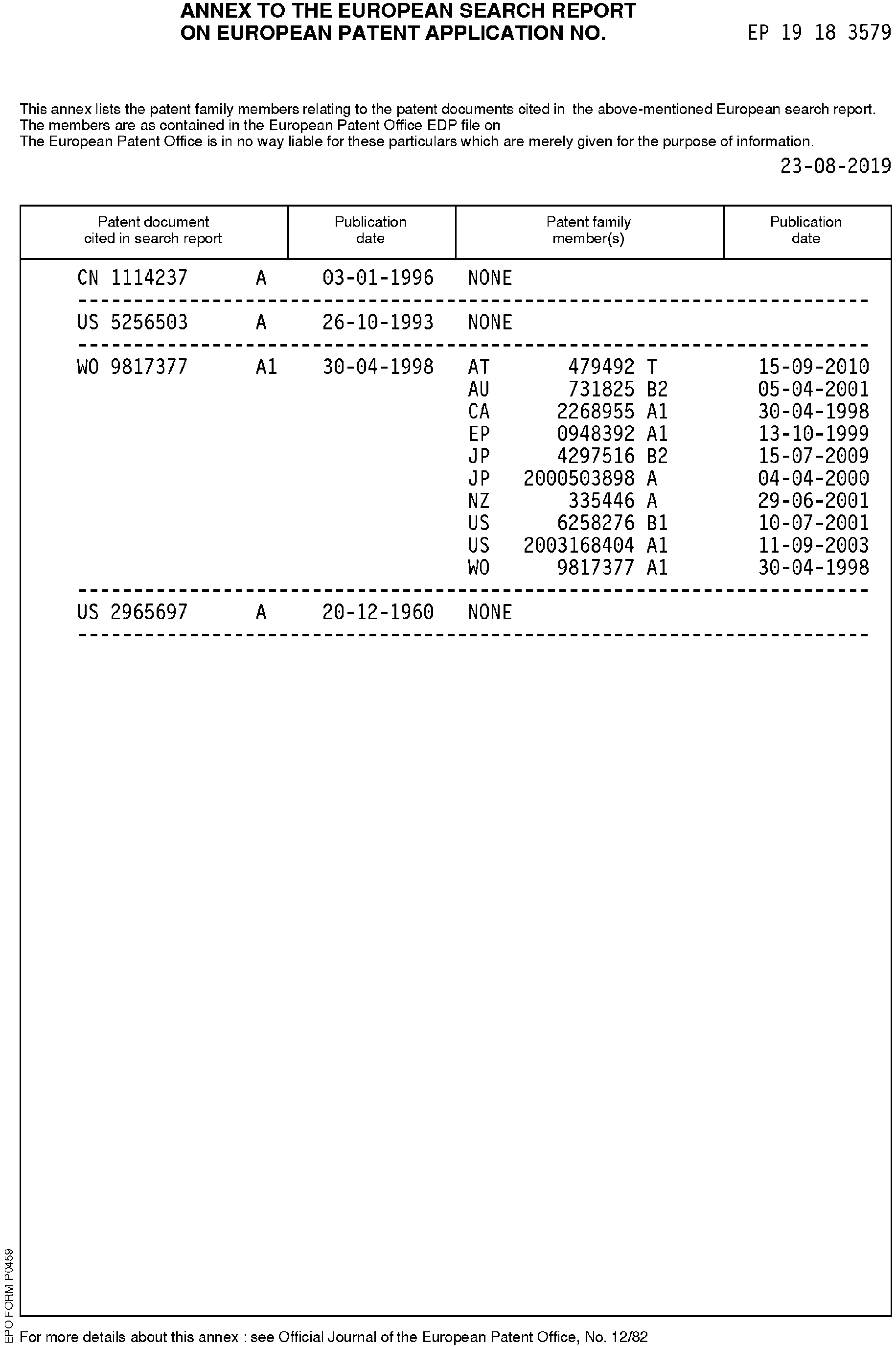