[0001] Two main types of wood flooring boards exist : classic wood flooring boards and engineered wood flooring boards. Classic wood flooring boards are made of a single layer hardwood board, whereas engineered wood flooring boards are made of a top layer hardwood board, typically referred to as a lamella, superposed to one or more additional layers such as a core and a base layer. The single layer hardwood board of classic wood flooring boards, and the top layer hardwood board of engineered wood flooring boards, are made of timber. It is well known in the field that timber is prone to having imperfections. When boards are sawn from the timber, one or more imperfections, commonly referred to as defects, such as a bark inclusion, knot, hole or pith, can be exposed on a surface of the board, for instance. The presence of a single defect affects the quality grade of the entire board, and the value of a board of a given type of wood is typically affected by both its dimensions and its grade. In some cases, it can even be worthwhile to remove a portion having the imperfection because even though it reduces the length of the board and therefore it's dimensional value factor, it can increase its grade and the corresponding increase in value stemming from the increase in the grade can exceed the diminution in value stemming from the reduction of dimension.
[0002] It is common in the wood industry to address such issues in a computer-implemented process referred to as "optimizing", which is relatively well developed as a technology. Optimizing is typically performed using a system commonly referred to as an optimizer or, because this system typically also includes an image acquirer, it can also be referred to as a scanner. This system scans the board, characterizes defects and produces a cutting solution via which one or more smaller boards having a better grade can be cut out of the scanned board. However, while former optimizing techniques were satisfactory to a certain extent, there always remains room for improvement.

Figs 1A and 1B are graphical representations of digital images of a portion of a board having a defect, before and after blasting, respectively;

Figs 2A and 2B are graphical representations of digital images of a portion of a board having a defect, before and after blasting, respectively;

Fig. 3A is a block diagram of a system for making wood flooring boards, in accordance with an example;

Fig. 3B is a block diagram of a system for making wood flooring boards, in accordance with another example;

Fig. 4 is a graphical representation of a blast nozzle path mapped against coordinates of a digital image of a wood board, in accordance with an example;

Fig. 5 is an oblique view of a cleaning station taken from the front and the left-hand side, in accordance with an example;

Fig. 6 is another oblique view of components of the cleaning station of Fig. 5, taken from the rear and the right-hand side.

[0018] As shown by comparing Figs. 1B to 1A, and by comparing Figs. 2B to 2A, blasting can be a suitable way of removing loose, partially loose or otherwise weak material forming an unsuitable substrate for wood filler application from certain types of defects in wood boards. In Figs 1A and 1B, the defect 12 is in a thicker wood board 10 destined to classic wood flooring, whereas in Figs 2A and 2B, the defect 14 is in a thinner wood board 10 for use as a lamella in an engineered wood board..
[0019] Fig. 3A schematizes an example of a wood flooring production system 16. The wood flooring production system 16 includes a sequence of stations 18, 20, 22 in this case, and is provided with a conveyor system 24 to assist in the conveyance of wood boards across stations and from one station to the next. The conveyor system 24 can be continuous, meaning that the order of boards is preserved between different stations, or discontinuous, meaning that piles of boards are made between at least one pair of stations and that the order of boards can change from one station to another. A first station in the sequence will be referred to herein as an image acquisition station 18, or scanning station. The image acquisition station 18 is designed to acquire a suitable digital image of at least one, preferably both, main faces of the wood board 10. Defects 12, 14 in the digital images are characterized using a computer 26. This characterization can include identifying a defect and determining an area occupied by the defect in a coordinate system which can be made to match a coordinate system used by a cleaning station 22 later in the sequence. The components performing these functions can be referred to herein as an artificial vision system. Such functions have been used in association with systems adapted to perform optimization of the value of the wood boards by cutting and can be performed by systems commonly referred to as scanners or optimizers and available from various manufacturers, such as EBI Electric in St-Georges, Quebec, Canada, or can alternately be performed by a dedicated system which can be specifically adapted to obtain a 2D or 3D digital image best suited for the cleaning station 22 operation. Typical scanners produce a 2D image of the entire board, and can be calibrated in a manner to map pixels of the digital image of a face of the board to a coordinate system corresponding to a longitudinal distance and a transversal distance from an origin, typically located at a given corner of the board's face, for instance.
[0020] The characterization can further include the attribution of a classification to the defect. For instance, some defects may be associated to a class categorizing them as requiring removal by cutting, whereas other defects may be associated to another class categorizing them as repairable by application of wood filler, and therefore to be ignored, or otherwise addressed as such, from the point of view of the cutting operation. Additional classes of defects than the two presented above can also be used. Attribution of the classification of defect can be made with the same computer 26 than the one performing the identification and localization functions for simplicity, by providing this computer with suitable software, or with another computer, via a suitable data communication means, as desired.
[0021] In one embodiment, for instance, three types of defects were defined :

1. A method of making a wood flooring board, the method comprising :

mapping the position and shape of the representation of the defect;

generating blasting instructions based on the mapped position and shape;

3. The method of claim 1 wherein the digital image is obtained using a linear wood board scanner operating while moving the wood board along a production line.

4. The method of claim 1 or claim 2 wherein the digital image includes a representation of at least one complete face of the wood board.

5. The method of any preceding claim wherein the virtual coordinate system of the wood board having an origin at a given corner of the complete face.

a wood board holder for holding the wood flooring board in a cleaning station,

a) further comprises a sensor configured to sense the position of an end of the wood board; and/or

b) further comprises a reader configured to read a code printed on the wood board, and further being configured for the computer to retrieve the blasting instructions based on an ID of the wood board associated to the code. 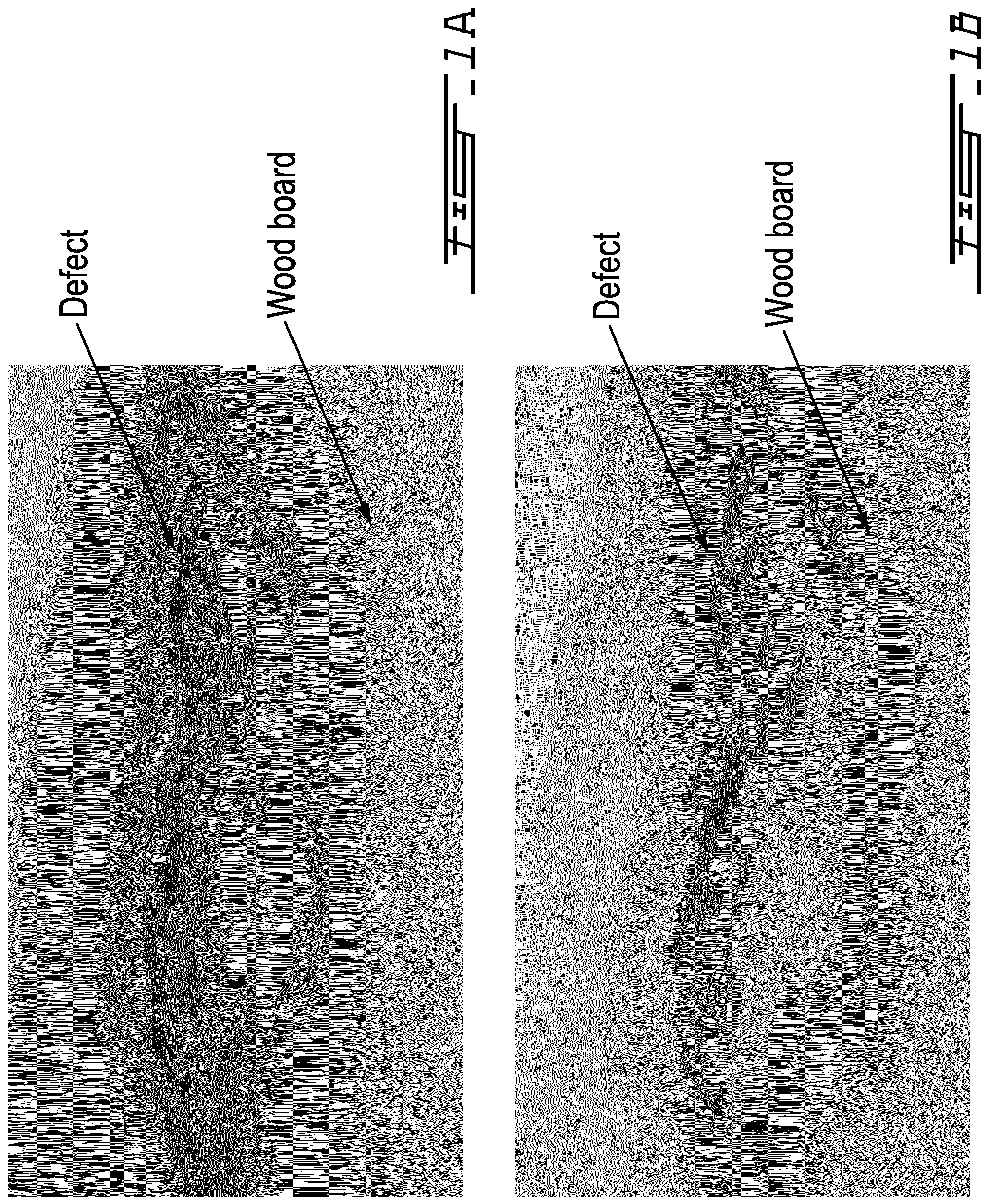 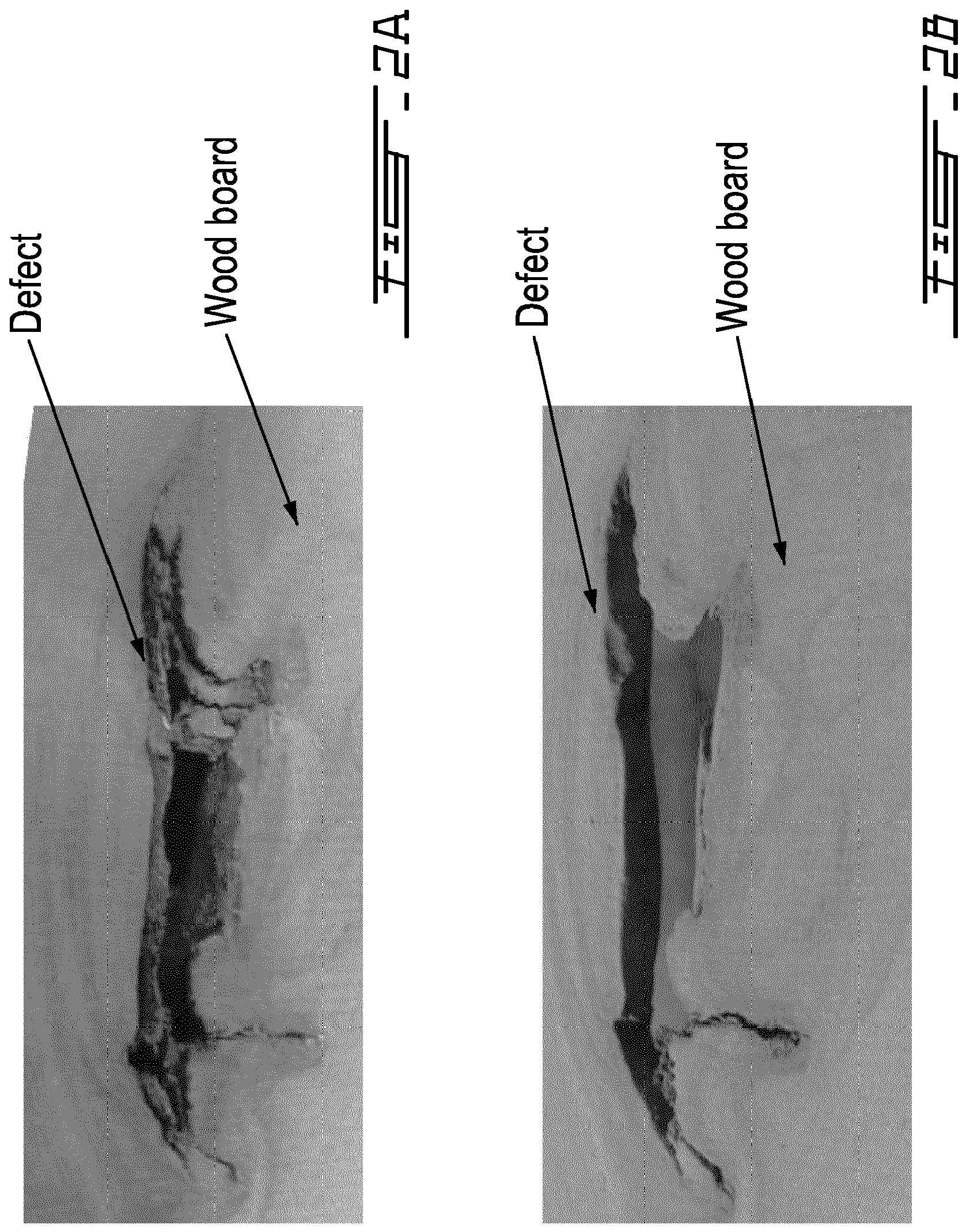 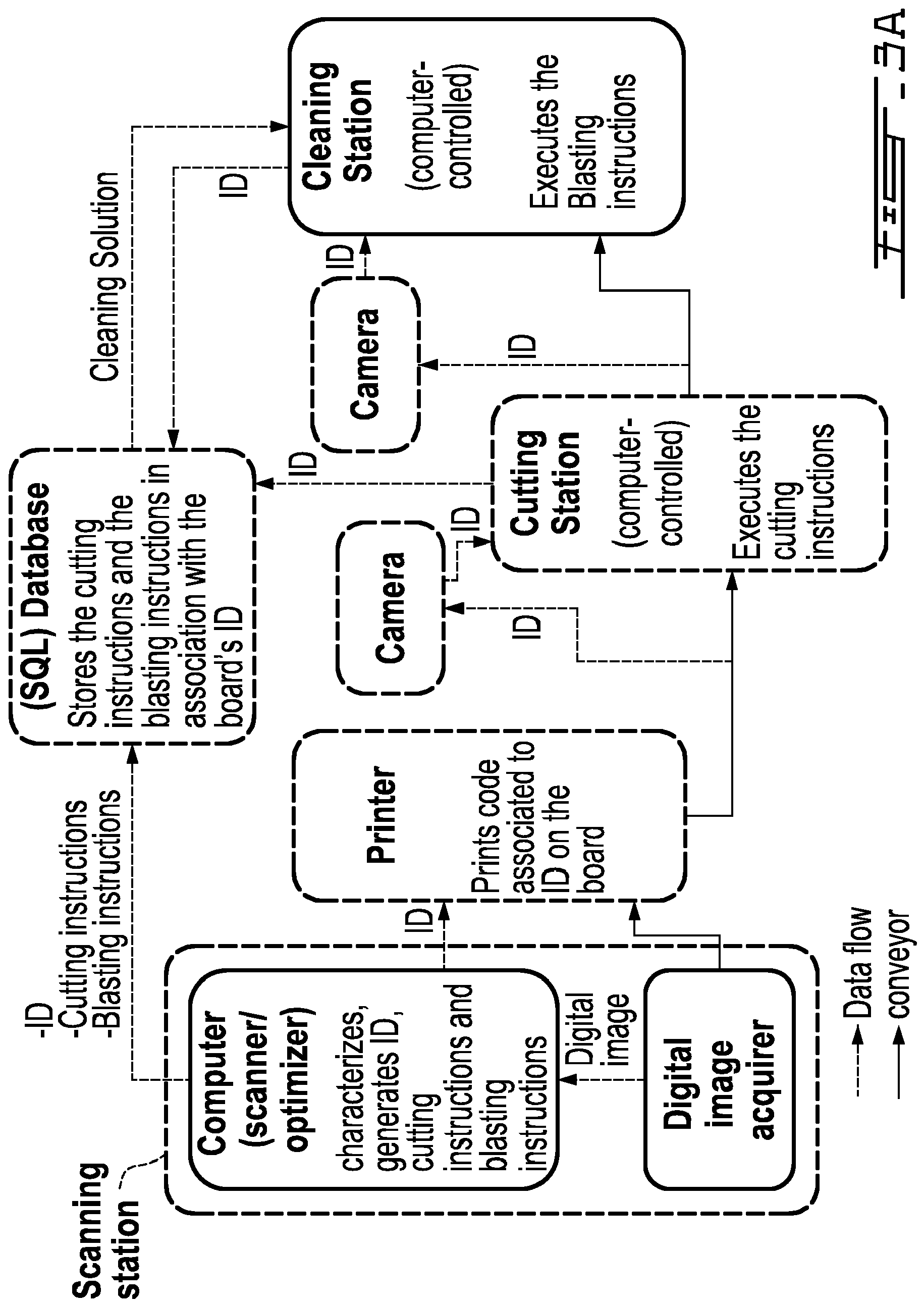 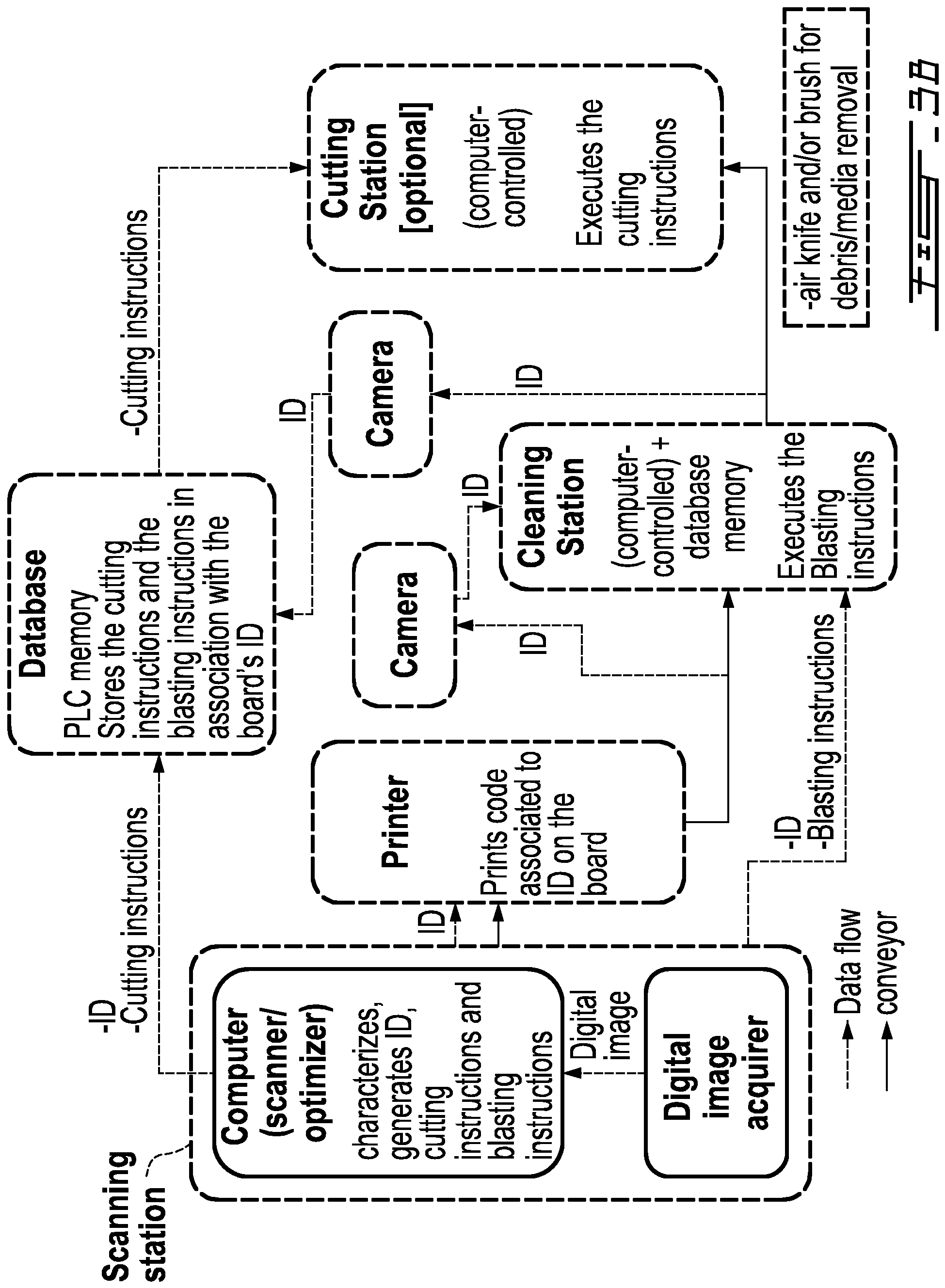 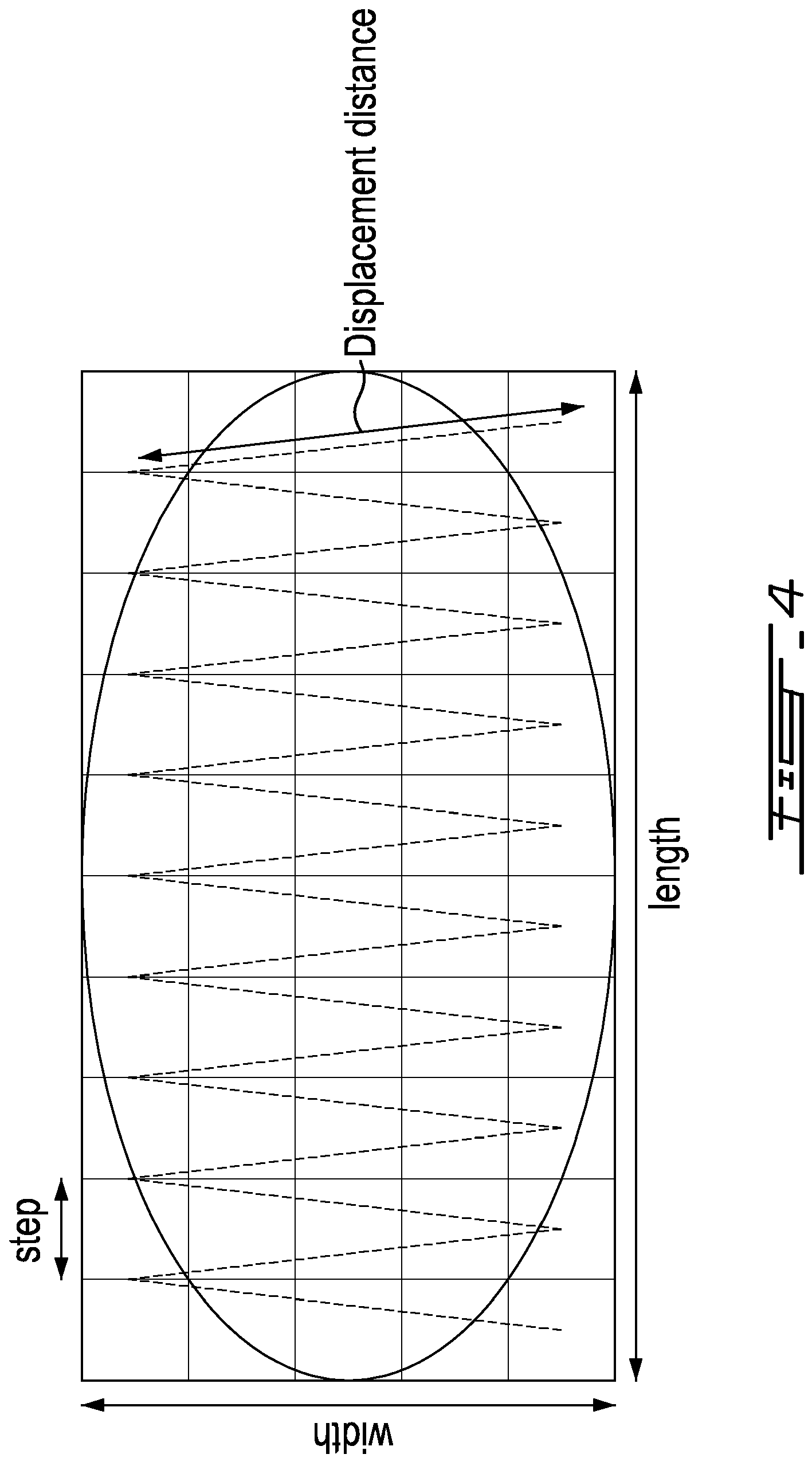 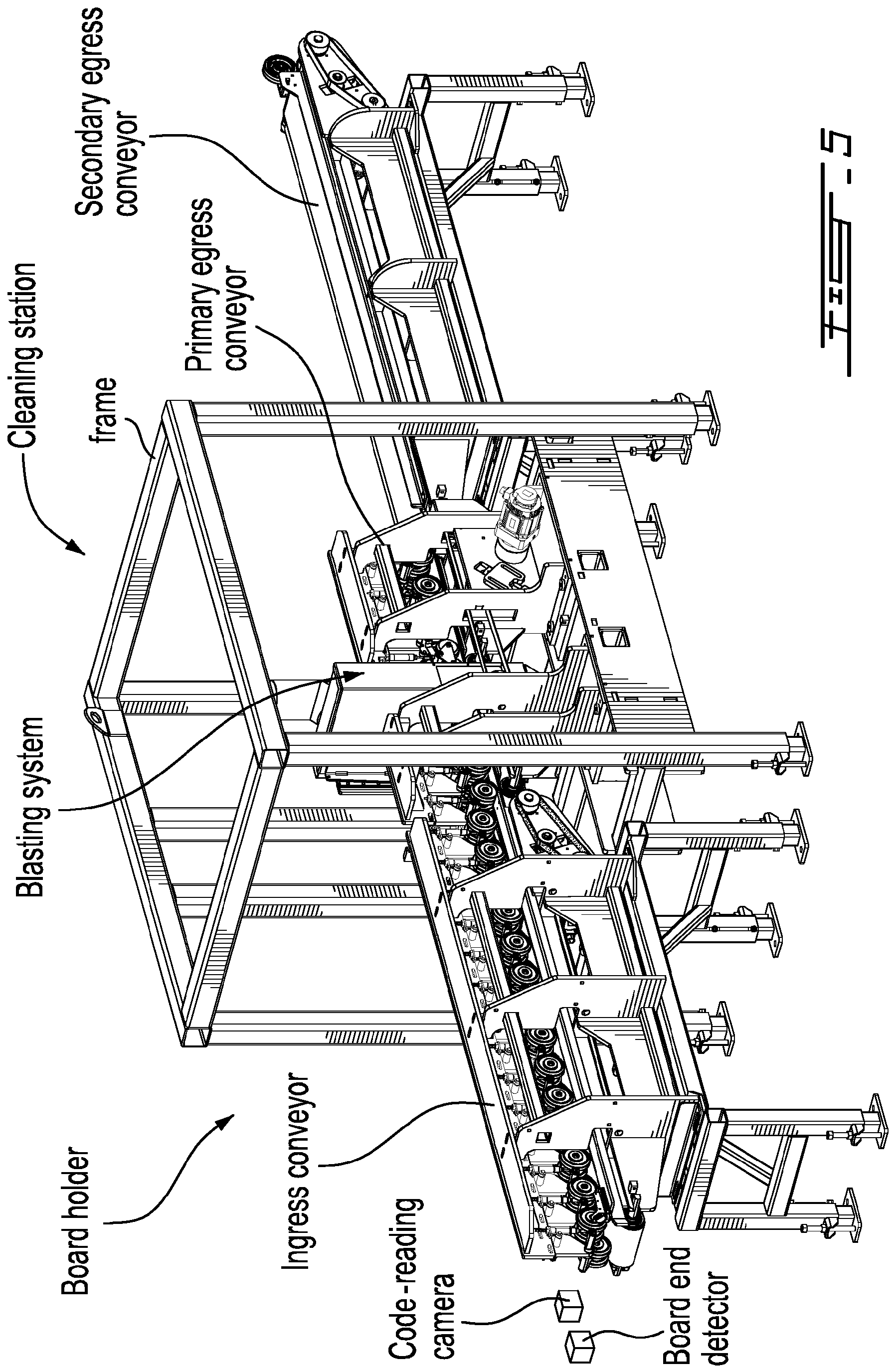 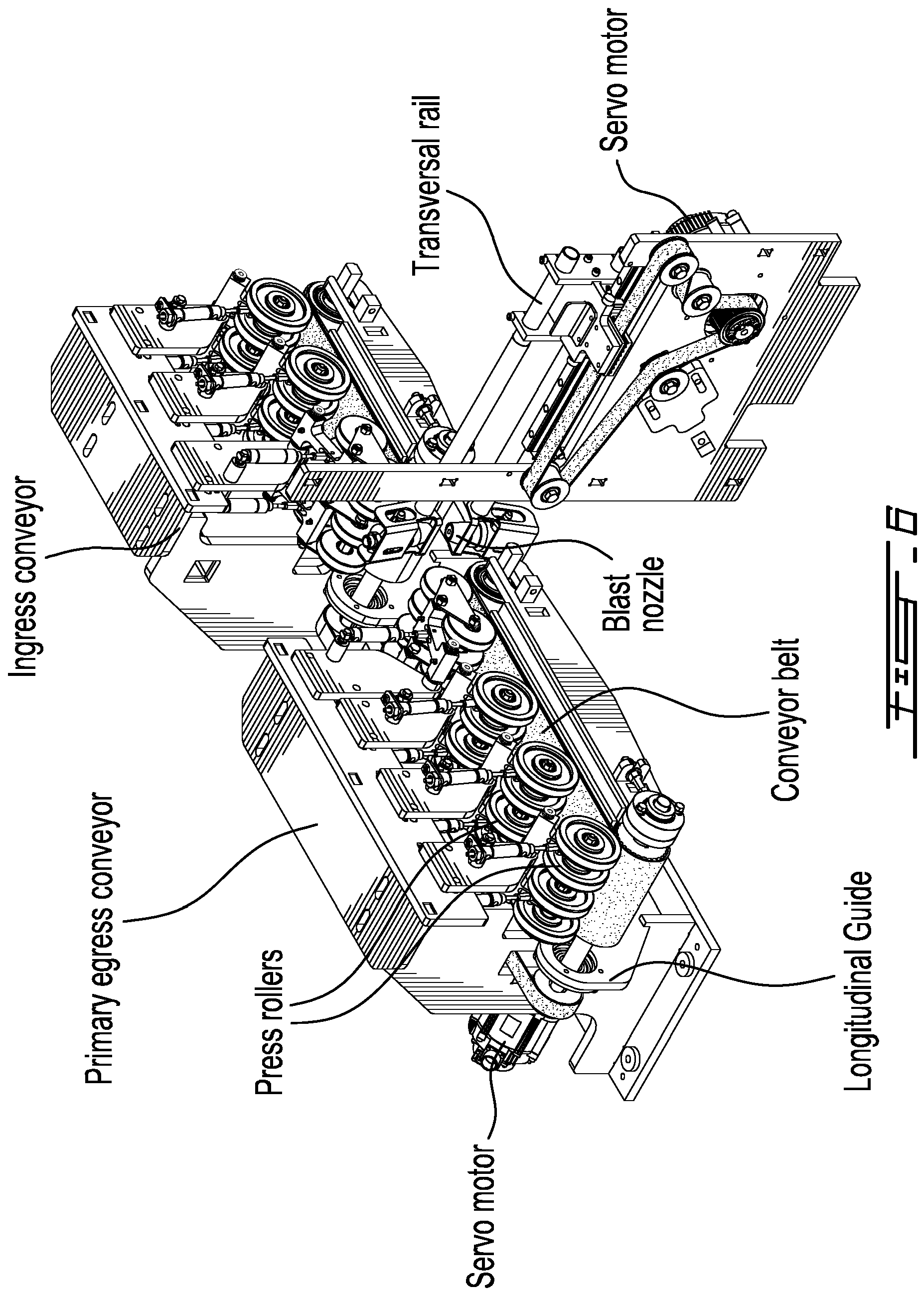 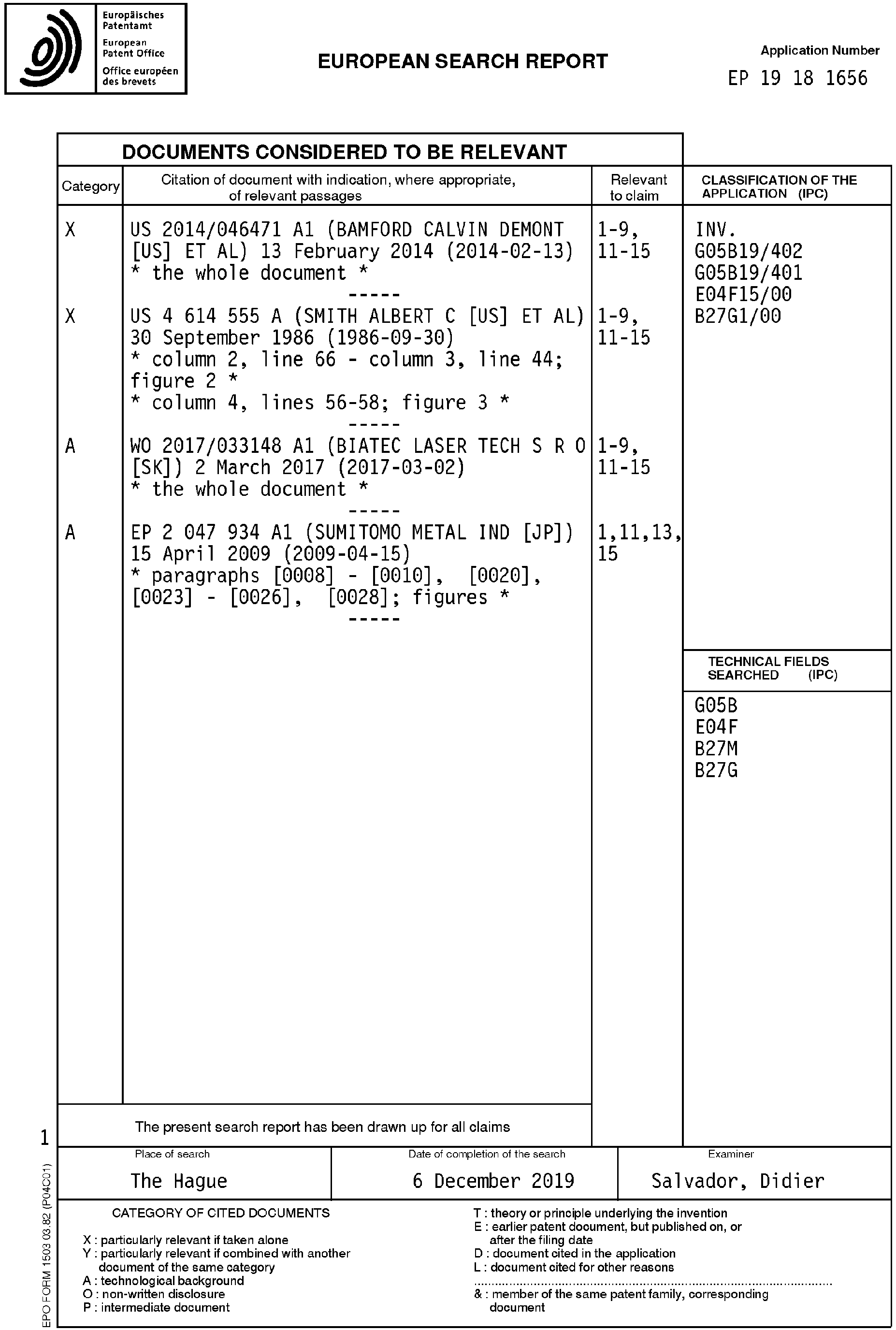 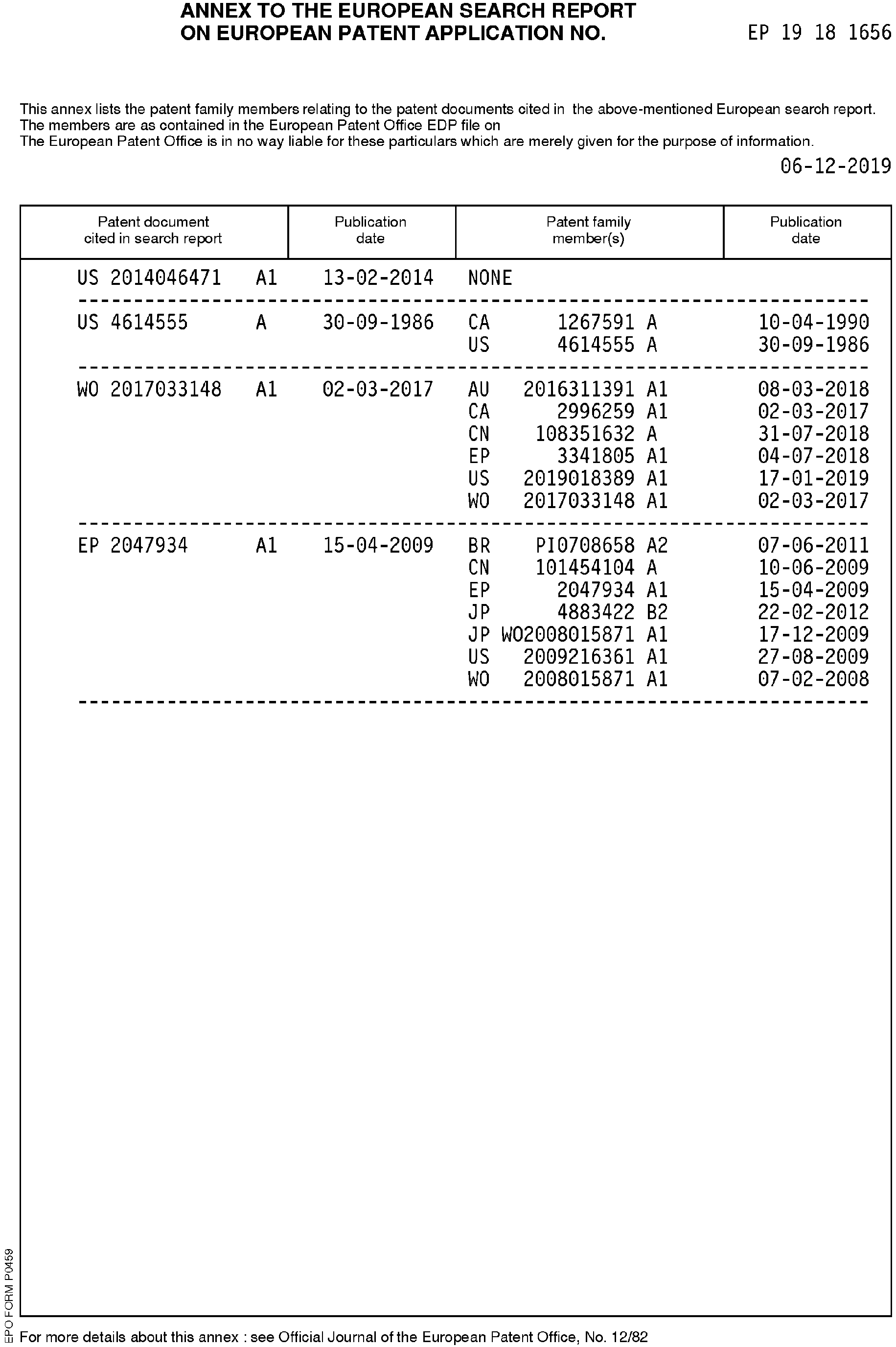