Fig. 1 shows a wheel comprising the rim according to the invention;

Fig. 2 shows a cross-section of a wheel comprising the rim according to the invention;

Fig. 3 is a detail of the coupling between the rim and the bead of a tire; and

Fig. 4 shows a blow-up of the cross-section of the rim of the invention but without a braking device.

1. Assembly process of a vehicle wheel comprising a tire consisting of two tire beads and a rim (1),

- said first section (2) is essentially ring-shaped and comprises a coupling part (20) and a supporting part (21),

- said support part (21) should consist of a ring structure centred on said rotation axis (2a) forming an inner surface (21a), an outer surface (21b) and two support crowns (21c) centred with respect to said axis of rotation (2a) and mutually arranged symmetrically with respect to the central plane (2b),

- said fastening part (20) consists of a crown centered along said rotation axis (2a), secured to said internal surface (21a) and capable of movement while secured to the external part of the wheel rim (1),

- said support belts (32, 42) determine with at least part of said support crowns (21c), the profiles (5a, 5b) each of which is counter-shaped to the tire beads and said tire is designed to house the beads,

and said method characterized by the fact comprises:

- a first step in which the thickness of said tire bead is evaluated to ensure that it is operationally compatible with the rim (1),

- a second step in which said second and third sections (3, 4) are selected so that said distance between the first crown (30, 40) and the second crown (31, 41) is compatible with said thickness,

- a third step in which said tire is placed into the first section (2),

- a fourth step in which said second and third sections (3, 4) are connected to the first section (2) so as to secure each of the tire beads to their respective profile (5a, 5b).

4. Process according to at least one previous claim, wherein said fastening part (20) comprises a braking device (7) designed to be at least partially secured to an external support.

5. Process according to at least one preceding claim, wherein said first section (2) defines at least one volume (22) delimited by said fastening part (20) to at least part of the support part (21) and the braking device (7) is included within said volume (22).

7. Process according to at least one previous claim for an aeronautical vessel of the ultralight aircraft category.

9. Wheel created by using any one of the process according to the above claims. 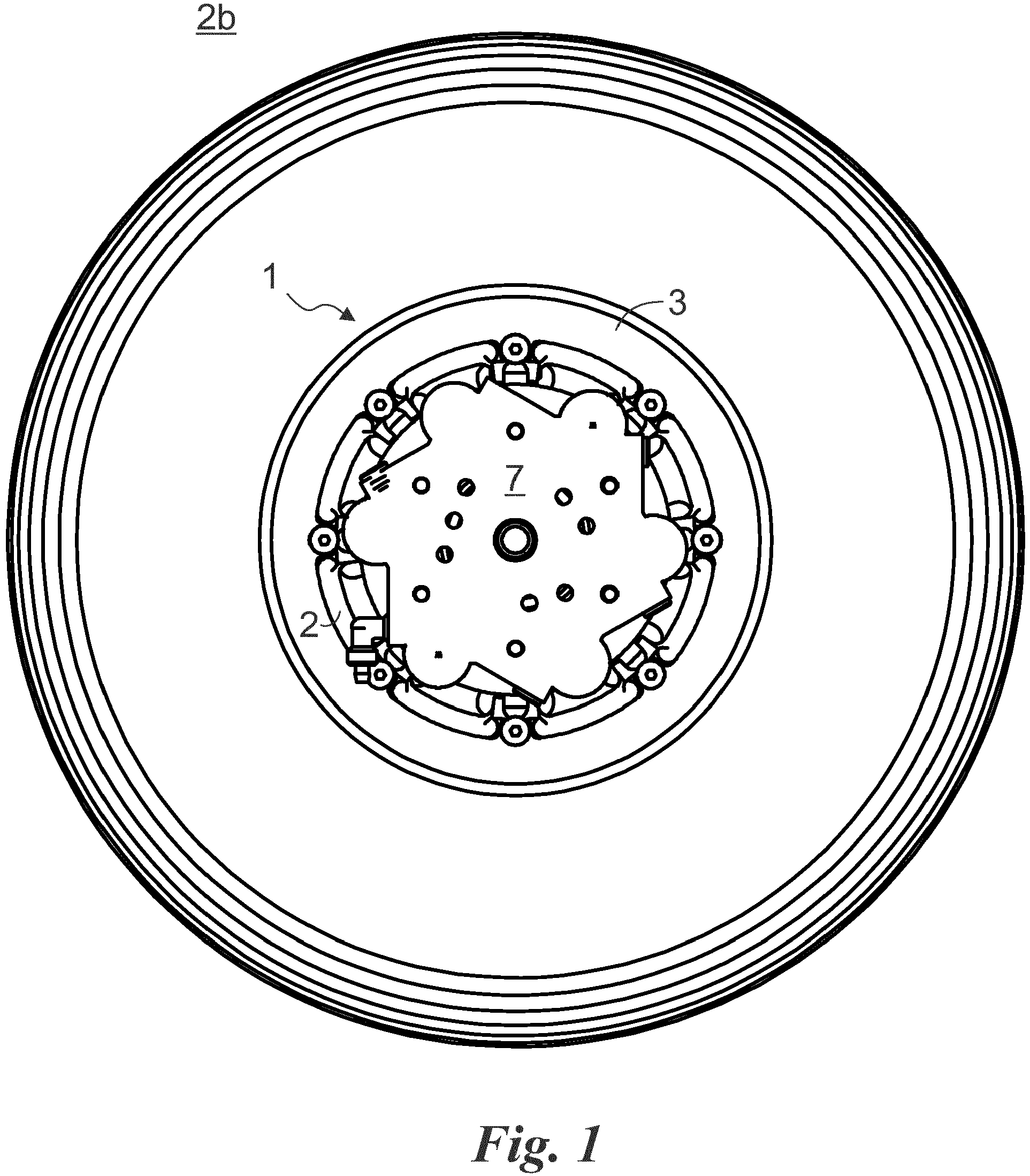 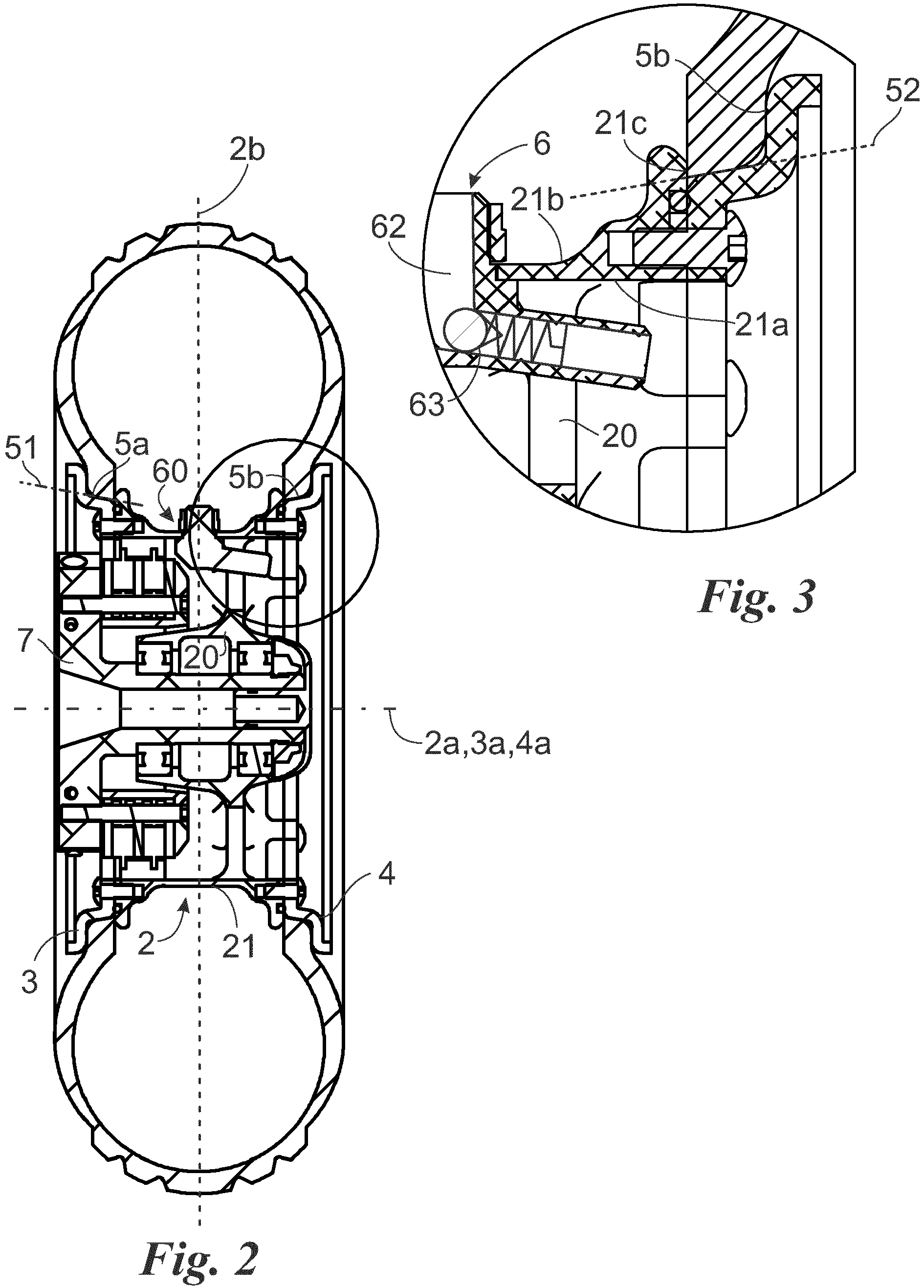 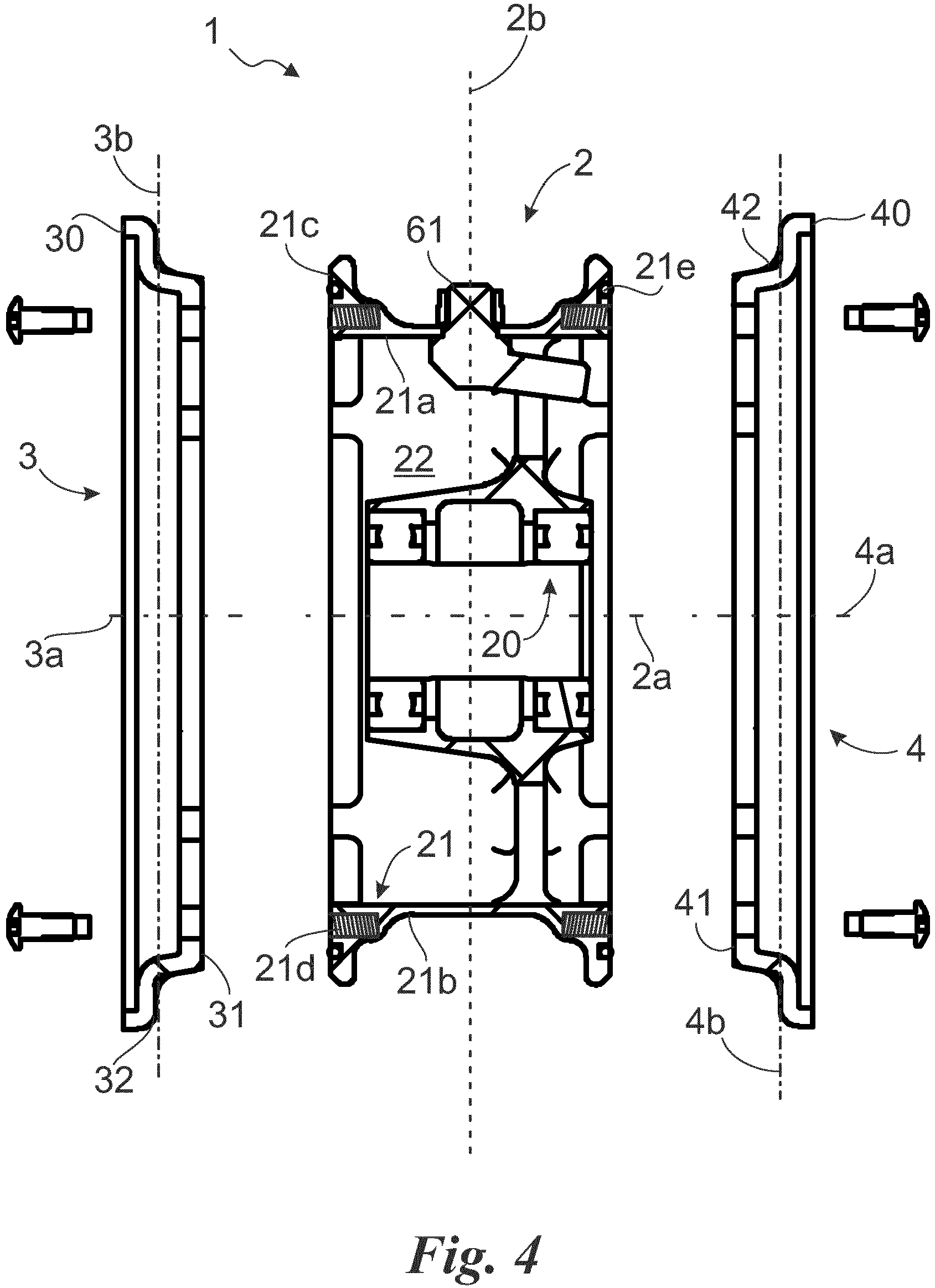 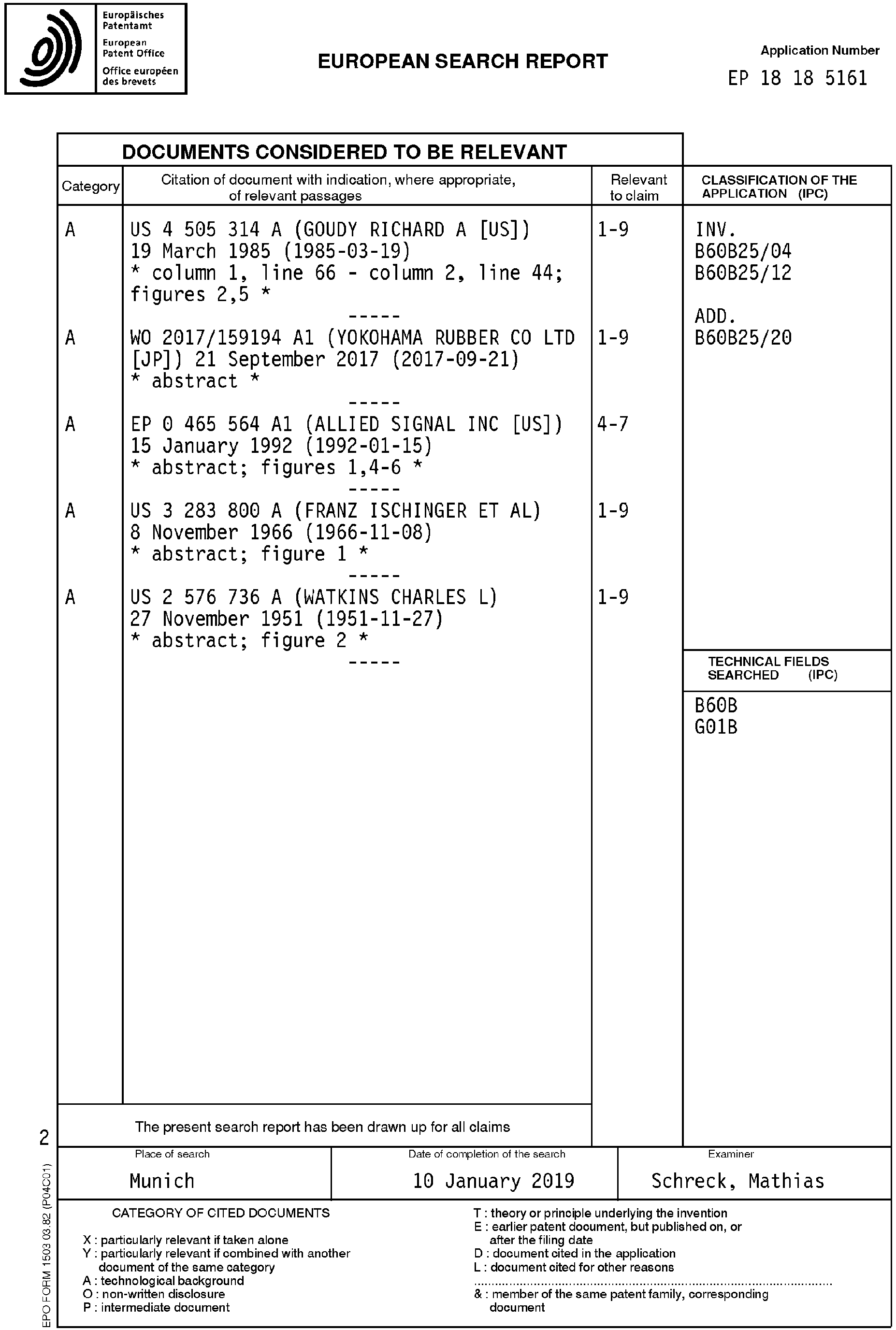 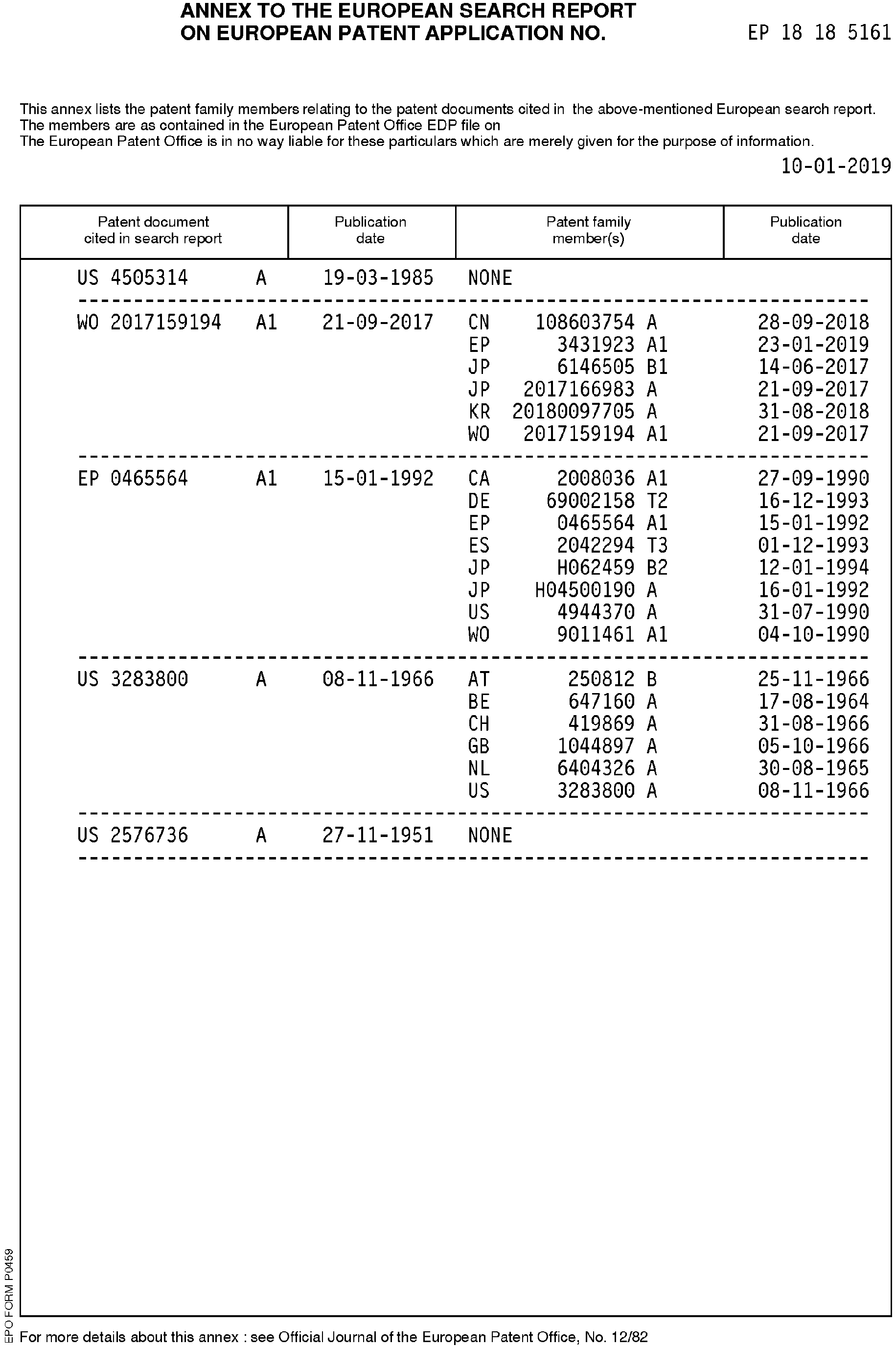