[0001] The object of the invention is a self-expanding medical device for paravalvular leak closure.
[0002] The invention relates to the field of intravascular medical devices introduced by percutaneous procedure into the patient's body in order to carry out medical procedures. The device is made of metal (metal alloys) with shape memory and is formed of a flexible, braided structure composed of many metal strands (metal threads, wires) and in a free state has a fixed, unfolded form which is deformable to a form with a smaller cross-section than the unfolded form. The device at its proximal and distal ends has elements grouping and fixing together the ends of the metal strands, which prevents these strands from tangling and keeps the entire structure of the device in a predetermined shape.
[0003] The device is therefore of a low profile, i.e. it is possible to maintain its folded position, close to the tubular position, having a small diameter, in order to place the device in an intravascular catheter and introduce it through such a catheter to the destination in the patient's body. The device belongs to the group of devices for the treatment of congenital and acquired heart defects, the device being intended for the treatment of paravalvular leak (PVL). Paravalvular leaks are one of the complications observed in patients after implantation of a cardiac prosthetic valve. Frequency of their occurrence is estimated to be 2-3%. Leakage can be caused by tissue damage in the vicinity of the valve, paravalvular infection, interruption of suture continuity or thrombus formation. The method of PVL treatment is a cardiac surgery, but for several years the alternative has been the non-invasive percutaneous procedure of closure of PVL. Detailed descriptions of treating patients with this method are widely known from the literature, for example from the publication: Iwona Świ

Reference signs in the drawings:

1' distal wall of the distal part

1" proximal wall of the distal part

2' distal wall of the proximal part

2" proximal wall of the proximal part

5' distal wall of the middle part

5" proximal wall of the middle part

10' stiffening means in the form of a braided structure

10"stiffening means in the form of a loop

11 side wall of the distal part

12 side wall of the proximal part

13 side wall of the middle part

1. A self-expanding medical device for paravalvular leak closure, comprising a flexible, braided structure composed of many metal strands, the device has in its free state a predetermined, unfolded form with a expanded shape and is deformable to a form with a smaller cross-section than the unfolded form, wherein the device has a proximal end and a distal end and both ends include elements grouping and fixing the ends of the metal strands, characterised in that the unfolded form comprises three parts having a developed surface, a distal part (1), a proximal part (2) and placed between them a middle part (5) having a cross-section smaller than the cross-sections of the distal (1) and proximal (2) parts, wherein the said three parts (1, 2, 5) are separated by narrowings of the braided structure, in the form of connecting elements (3, 4) with a cross-section smaller than the cross-section of these three parts (1, 2, 5), wherein each of the parts (1, 2, 5) is spatially shaped so that in each of them, in a free unfolded state, the distal wall and the corresponding proximal wall do not contact each other.
2. The medical device according to claim 1, characterised in that its middle part (5) comprises a sealing material.
3. The medical device according to claim 1 or 2, characterised in that its distal part (1) comprises a stiffening means.
4. The medical device according to claim 1 or 2, or 3, characterised in that the cross section of the middle part (5) has the form of a square, a rectangle, a circle, an ellipse, an hourglass. 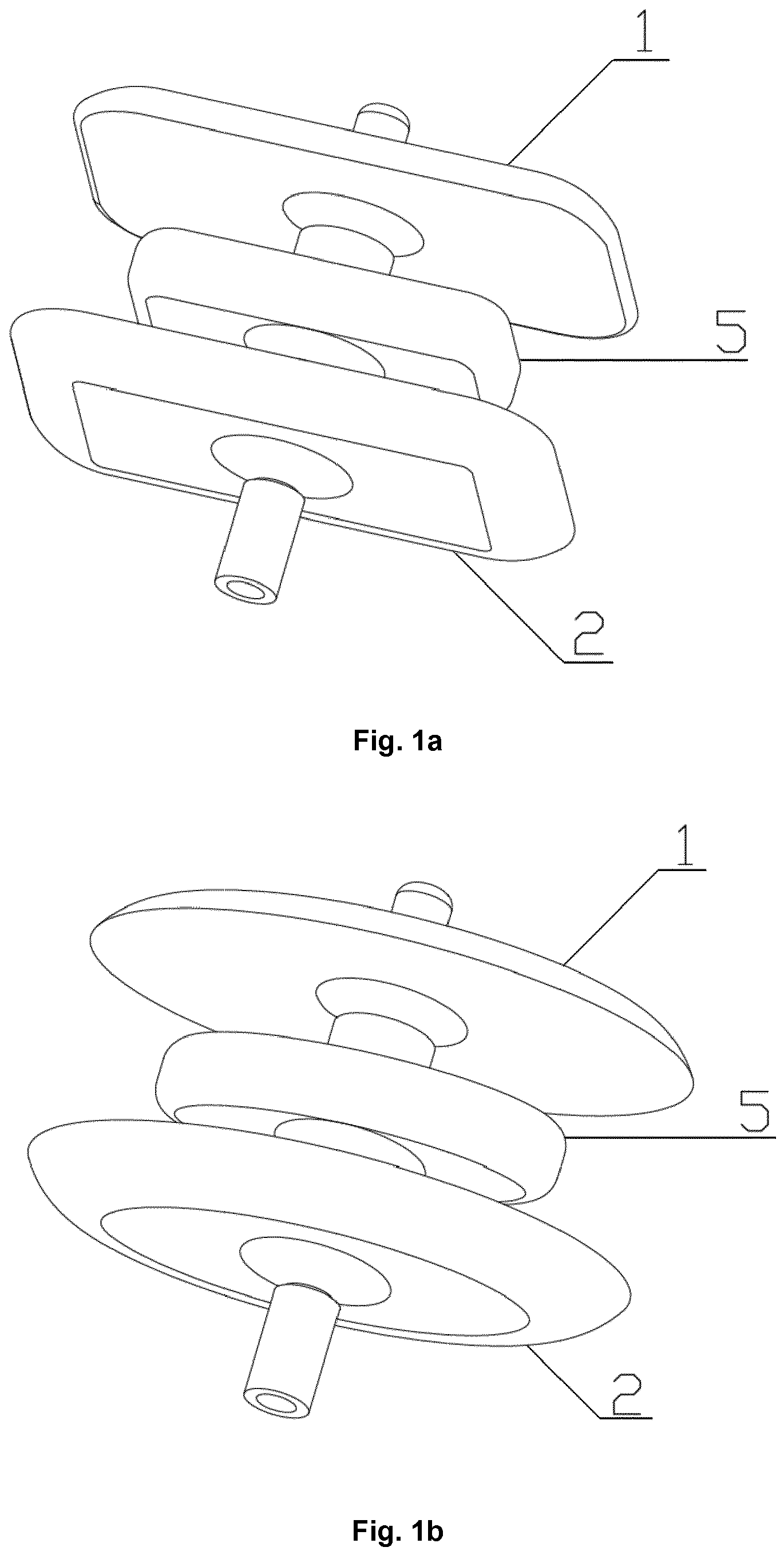 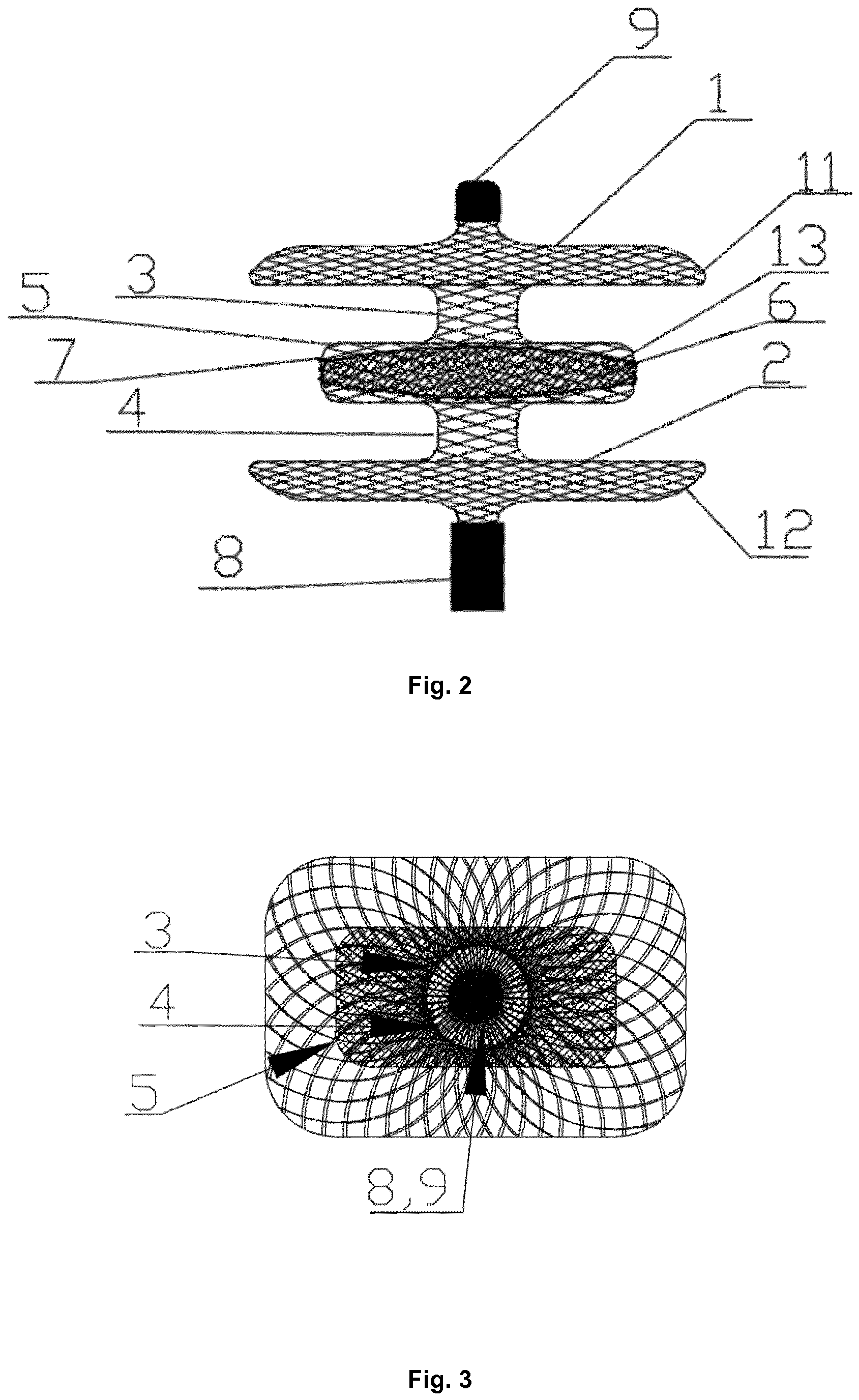 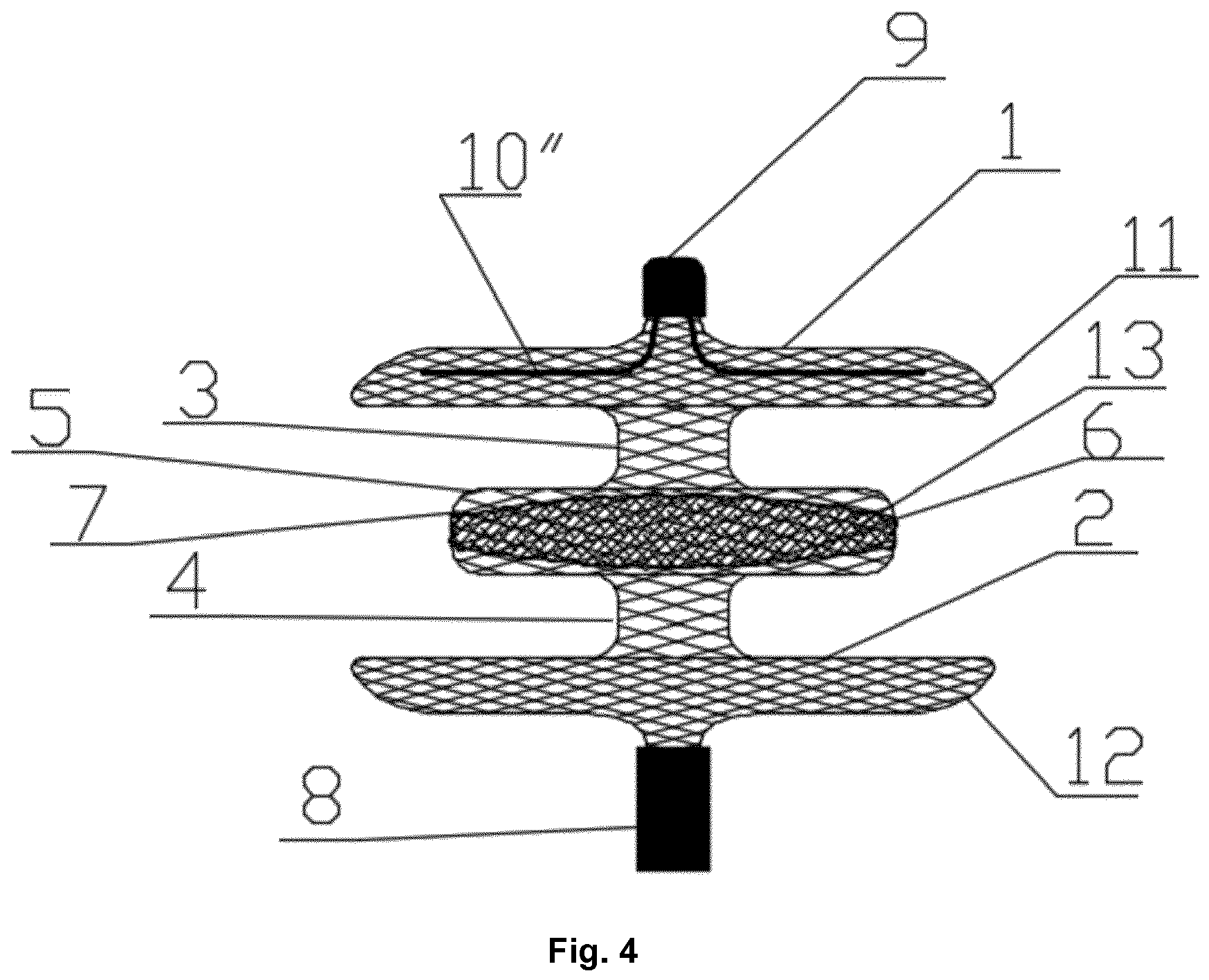 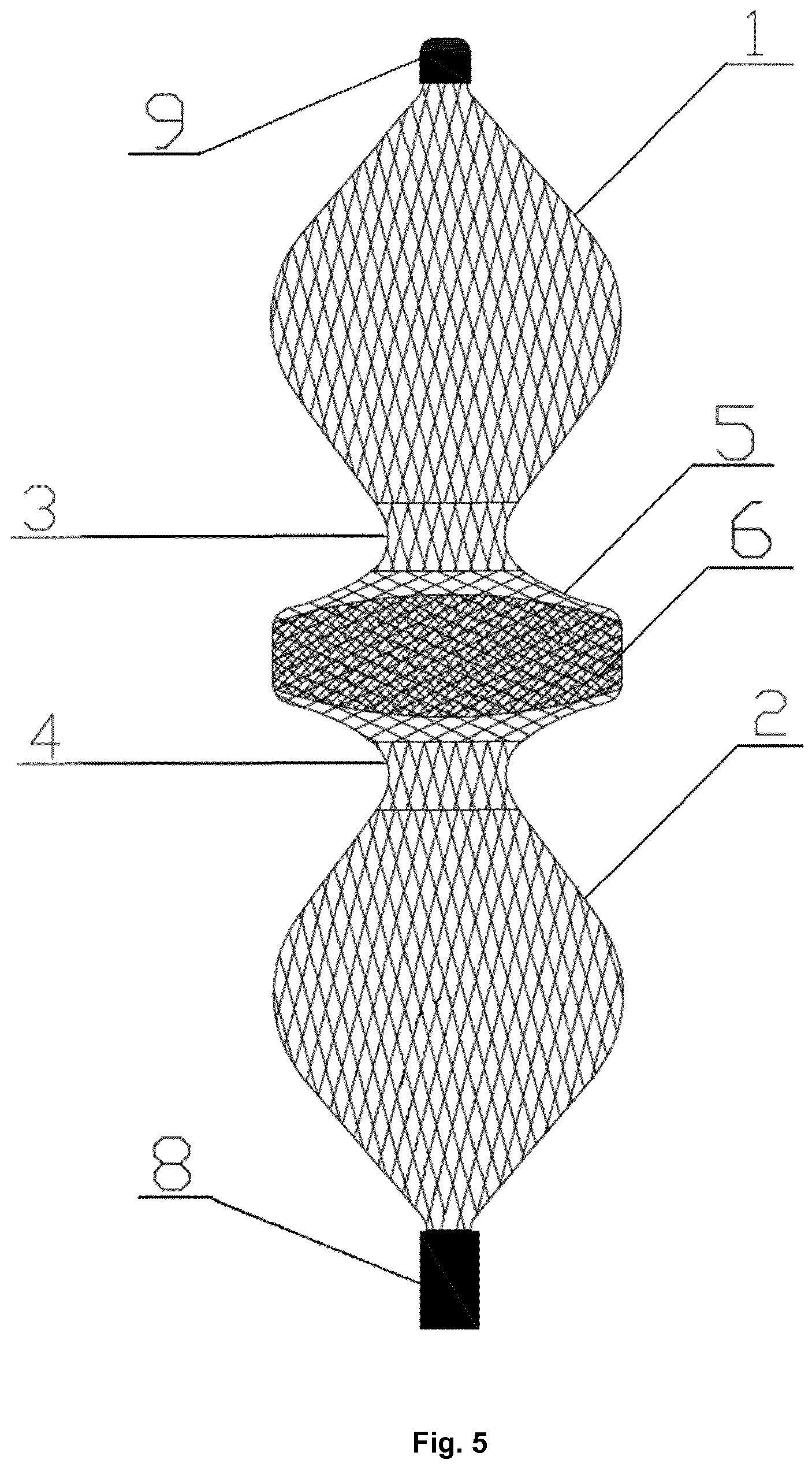 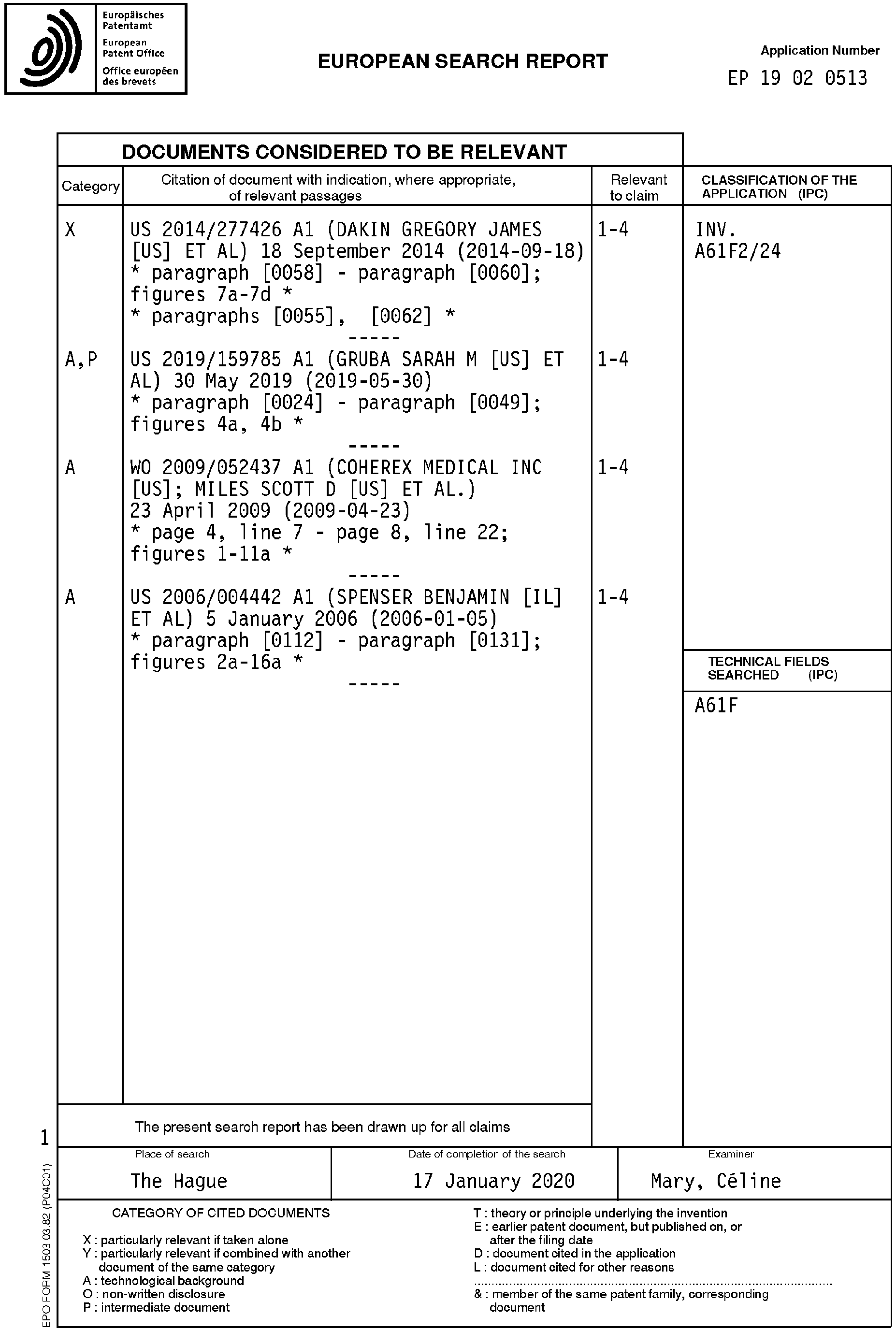 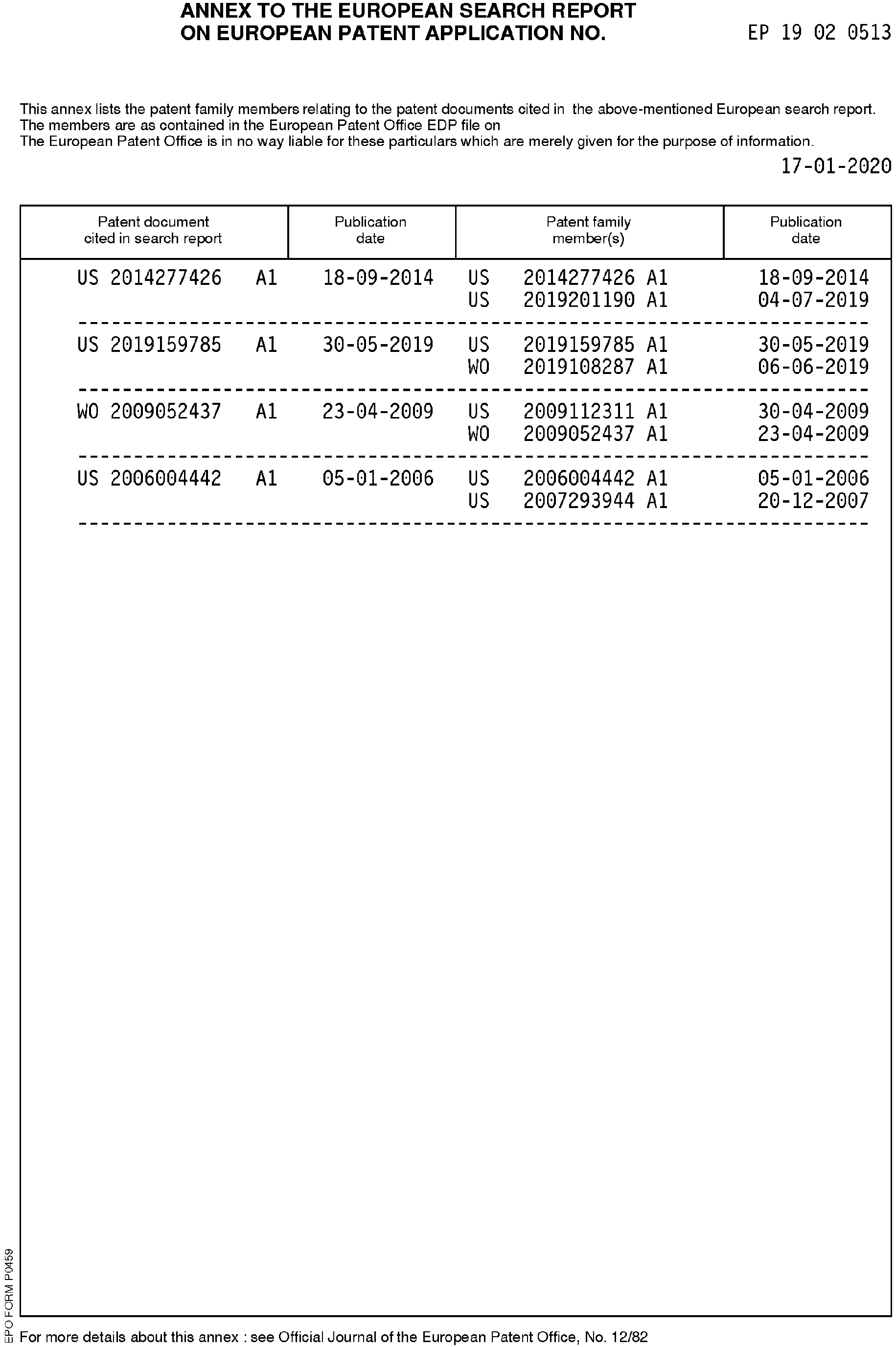