[0002] The description relates to a shared digital workspace. One example includes a display device and sensors. The sensors are configured to detect users proximate the display device and to detect that an individual user is performing an individual user command (e.g., input command) relative to the display device. The system also includes a graphical user interface configured to be presented on the display device that allows multiple detected users to simultaneously interact with the graphical user interface via user commands.
[0003] The above listed example is intended to provide a quick reference to aid the reader and is not intended to define the scope of the concepts described herein.

FIGS. 1-16 show example shared digital workspace scenarios in accordance with some implementations of the present concepts.

FIGS. 17-18 show example shared digital workspace systems in accordance with some implementations of the present concepts.

FIG. 19 is a flowchart of example shared digital workspace techniques in accordance with some implementations of the present concepts.

[0083] In summary, the shared canvas can allow multiple users to interact simultaneously. The shared canvas can attempt to recognize users to offer additional functionality, such as personalized functionality and/or access to private content. Recognized users can bring their private content into the shared space through a tunnel or other mechanism.
[0084] The present concepts can be distinguished from existing sharing where each user has their own device to get to shared space, such as during a conference call. Instead, in some implementations of the present concepts, the shared canvas does not belong to any of the users. The group experience device supporting the shared canvas can know about the users that are simultaneously using it either actively and/or viewing as part of the group. The shared canvas can offer a mechanism for individual people to get to their private assets and interact with those on the shared canvas.
[0085] Although techniques, methods, devices, systems, etc., pertaining to group experience display devices are described in language specific to structural features and/or methodological acts, it is to be understood that the subject matter defined in the appended claims is not necessarily limited to the specific features or acts described. Rather, the specific features and acts are disclosed as exemplary forms of implementing the claimed methods, devices, systems, etc.

Statement A) A device, comprising:

Statement D) The device of Statement B), wherein the personal content comprises content from a global profile or a personal device of the first individual user.

Statement E) The device of Statement B), wherein the personal content comprises a listing of personal devices belong to the first individual user and accessible via the individual tunnel.

Statement F) The device of Statement B), wherein the graphical user interface is further configured to present an identity of the first individual user proximate to the individual tunnel.

Statement I) The device of Statement H), wherein the sensors are configured to detect and identify the multiple different users when the individual users perform user commands as part of the simultaneously interacting.

sensors configured to detect users proximate the display device; and,

a processor configured to cause:

presentation of a shared canvas of a graphical user interface (106) on the display device;

present a shared canvas on the display;

concurrently display the different personal data items retrieved from the cloud service on the shared canvas.

detect and simultaneously interact with multiple different users on a shared space of the graphical user interface;

to allow individual users to have personal spaces on portions of the shared space;

to continually detect user commands; and

to continually seek to identify which user is performing a user command. 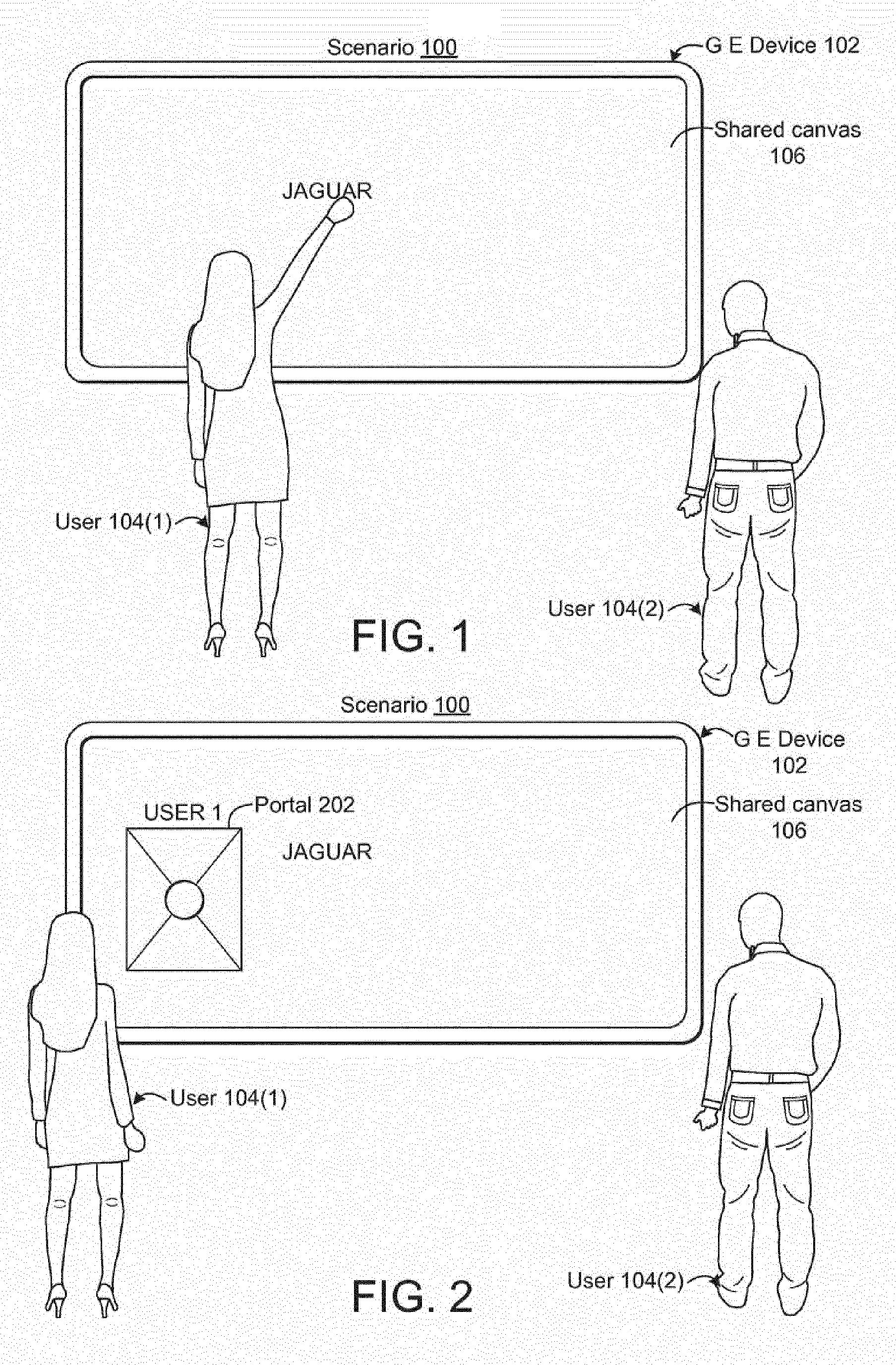 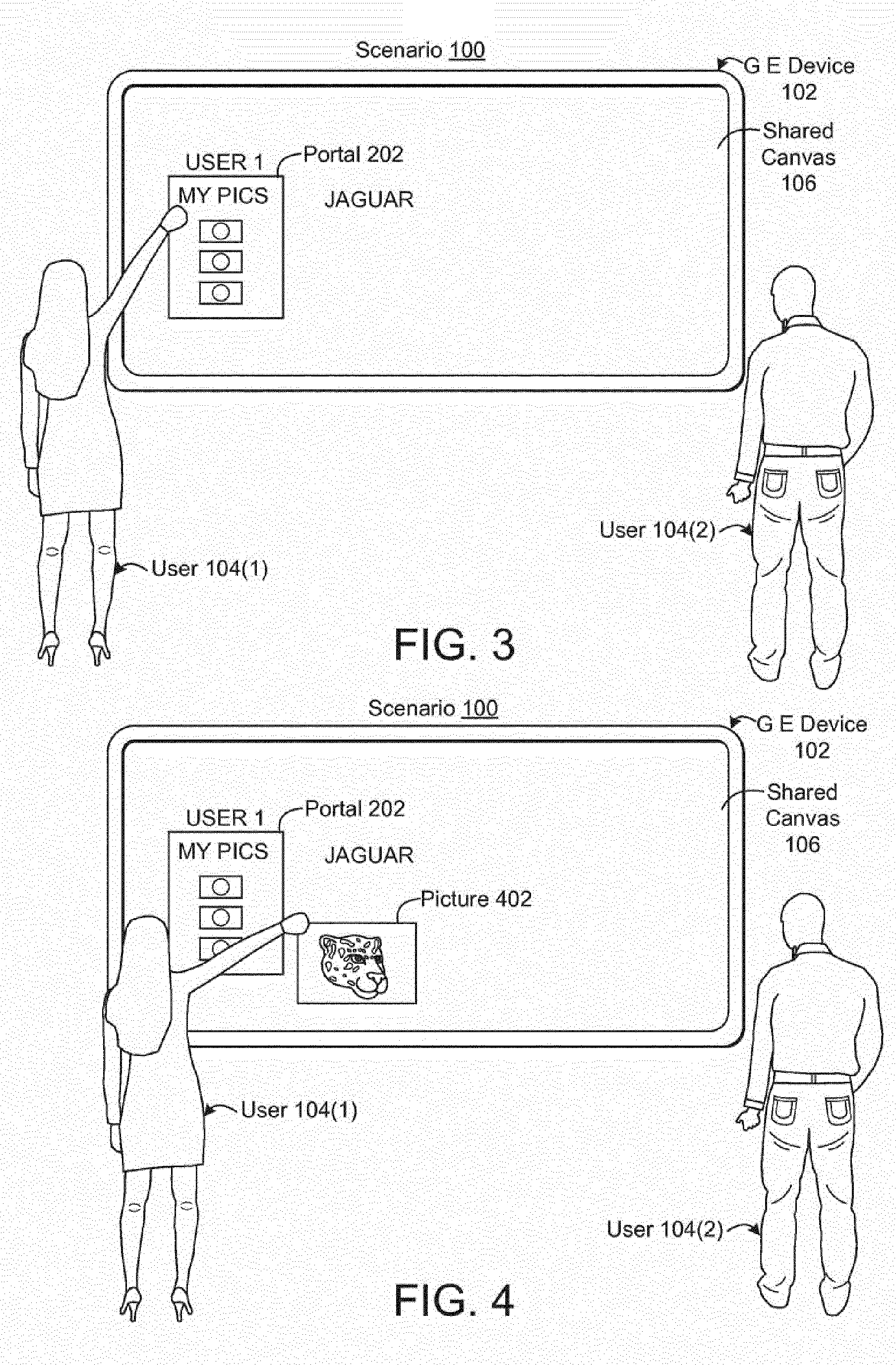 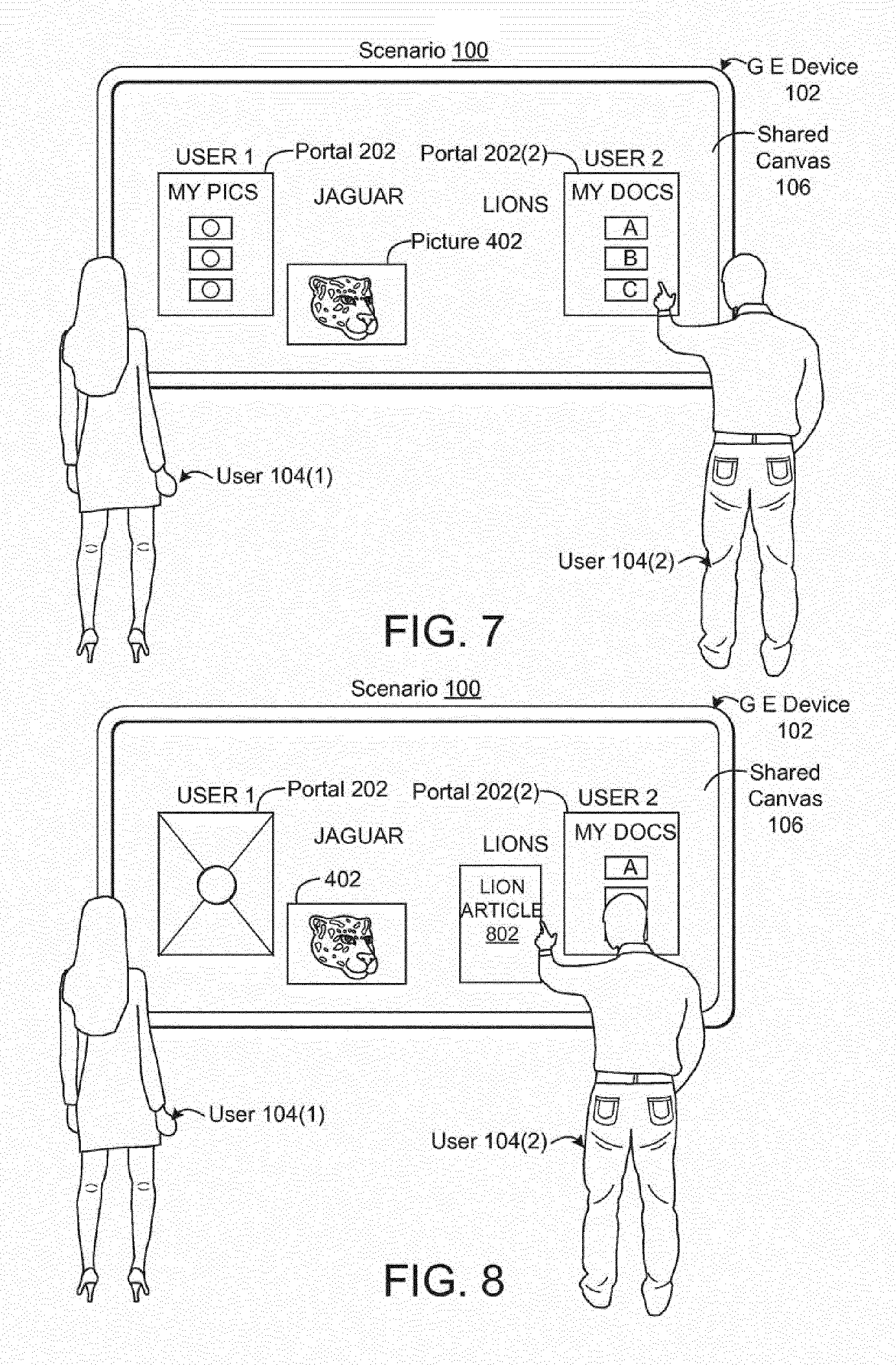 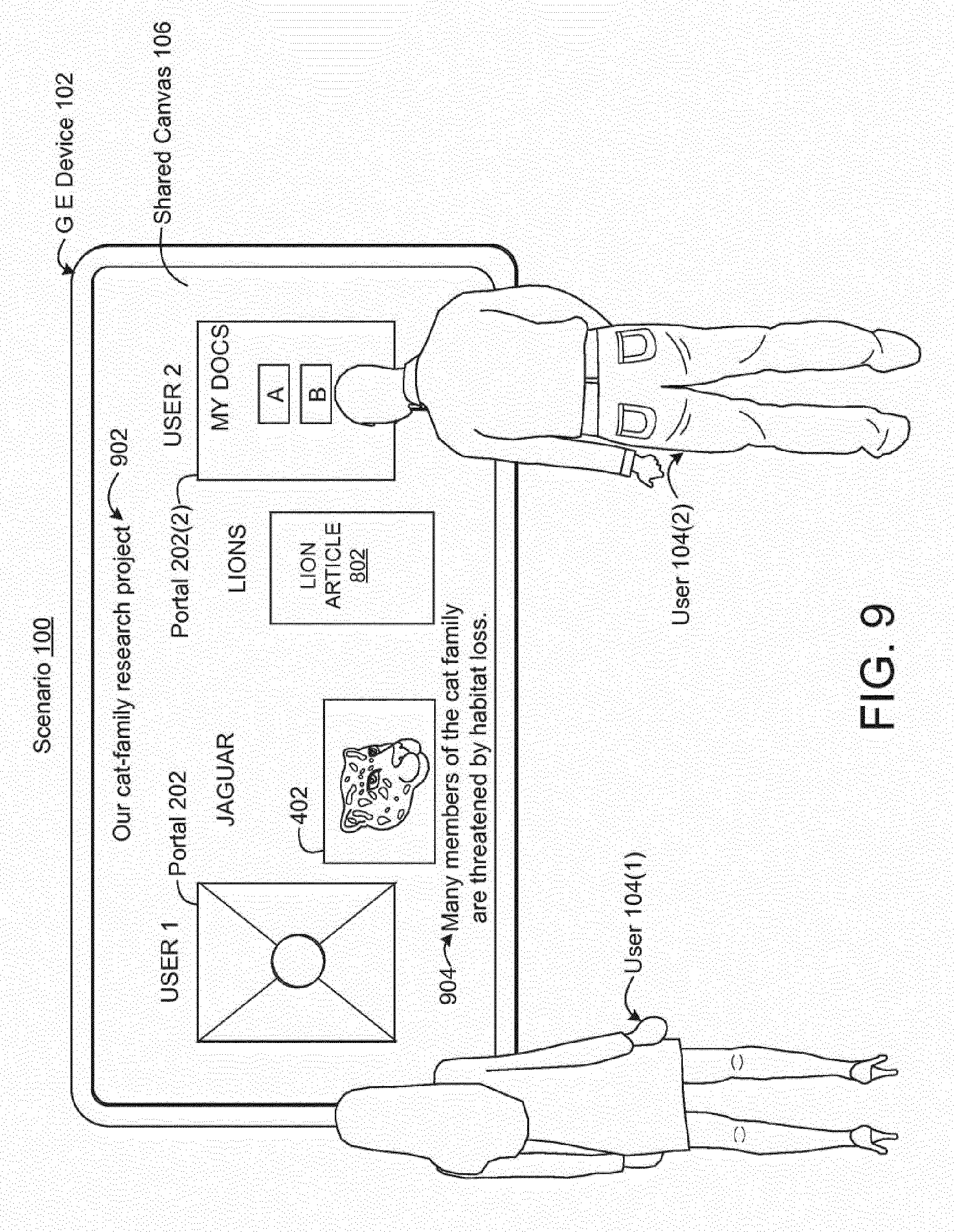 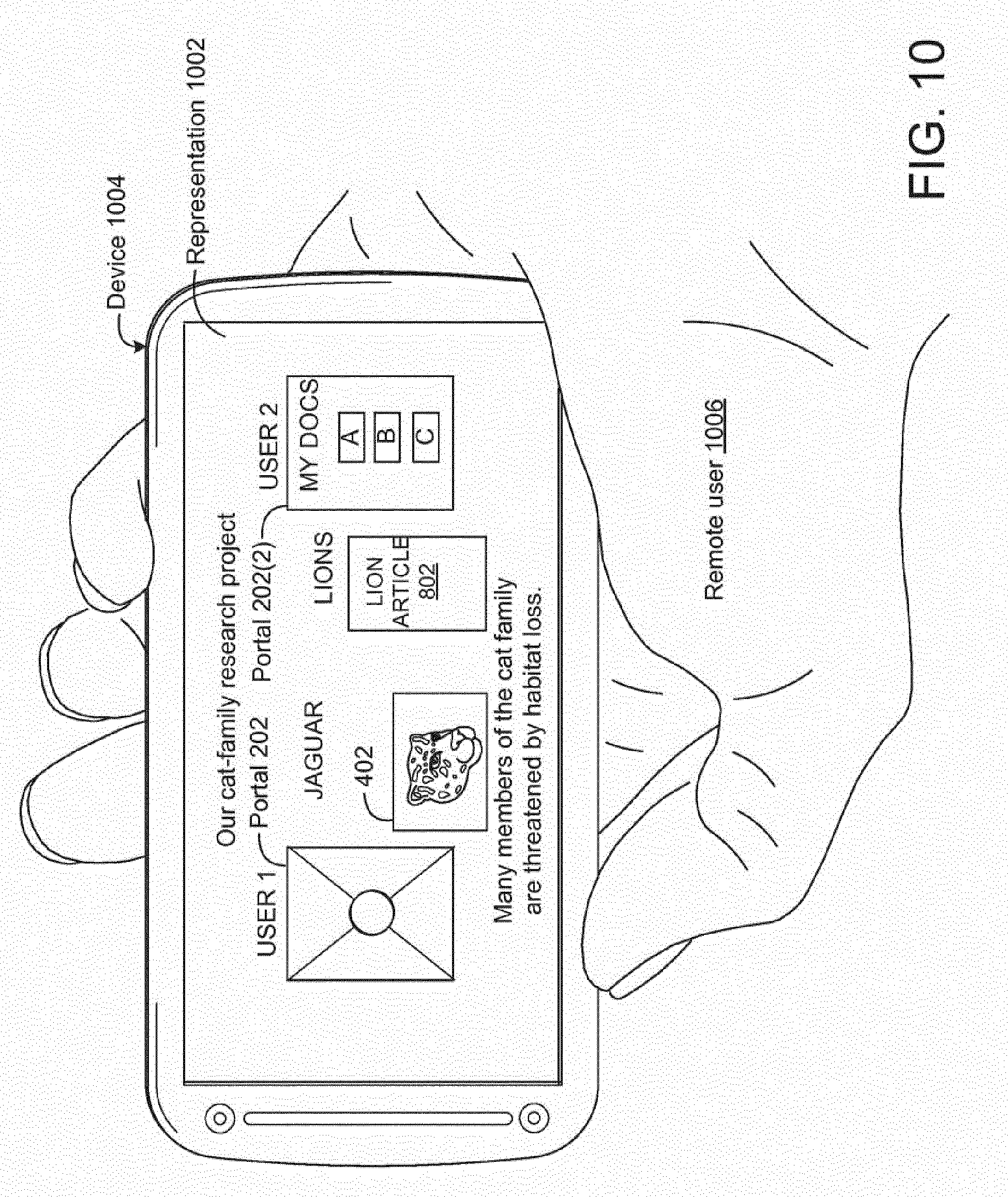 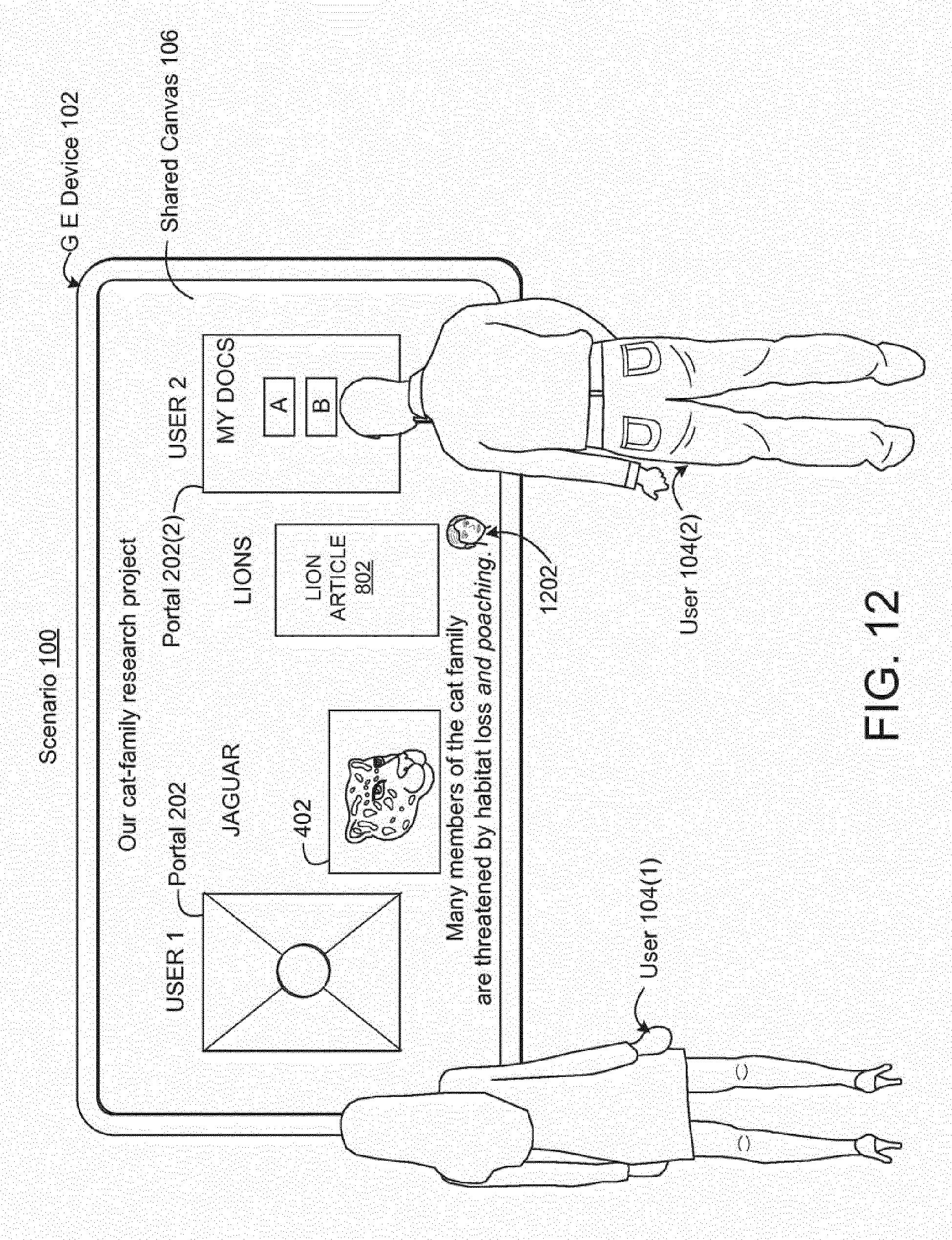 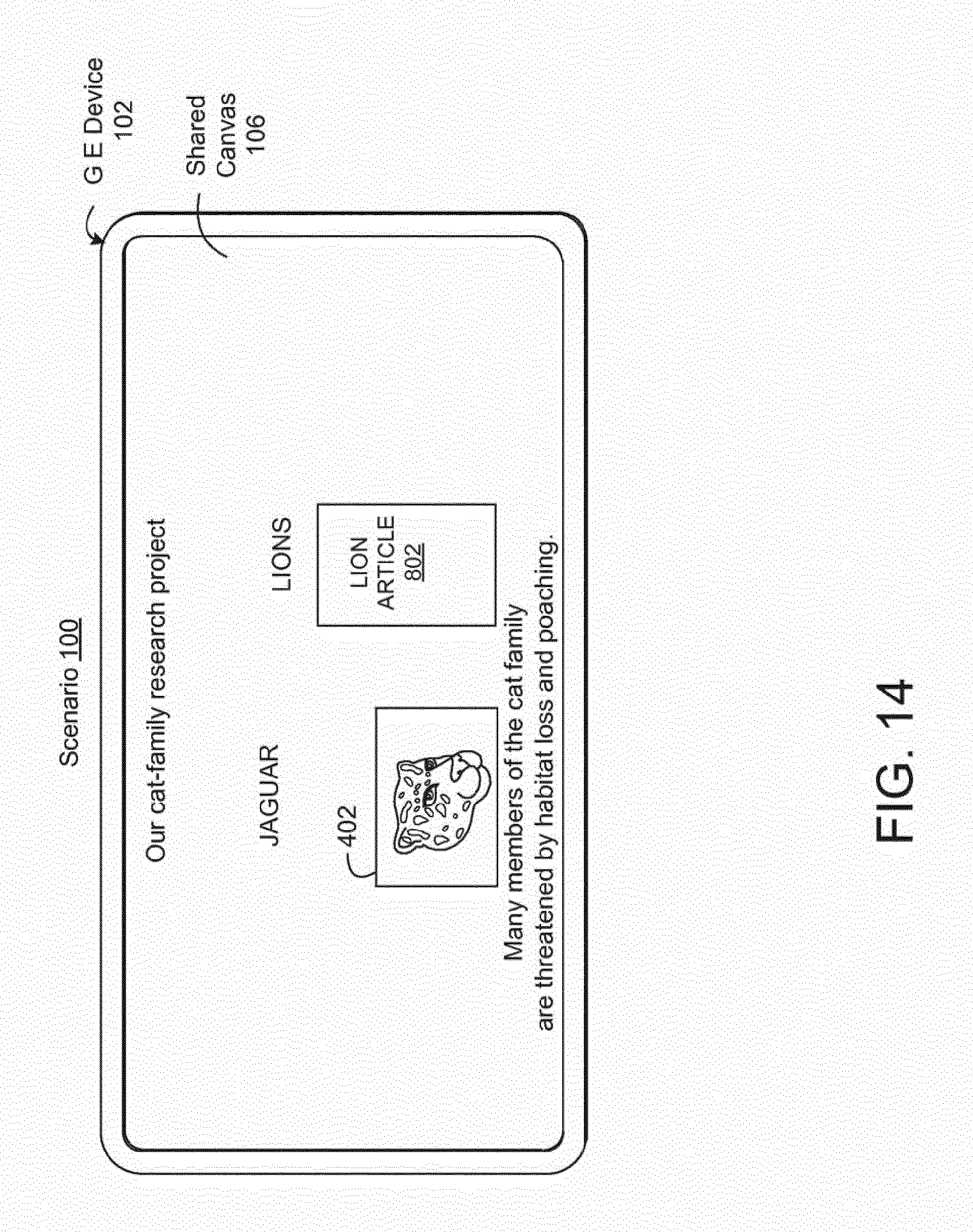 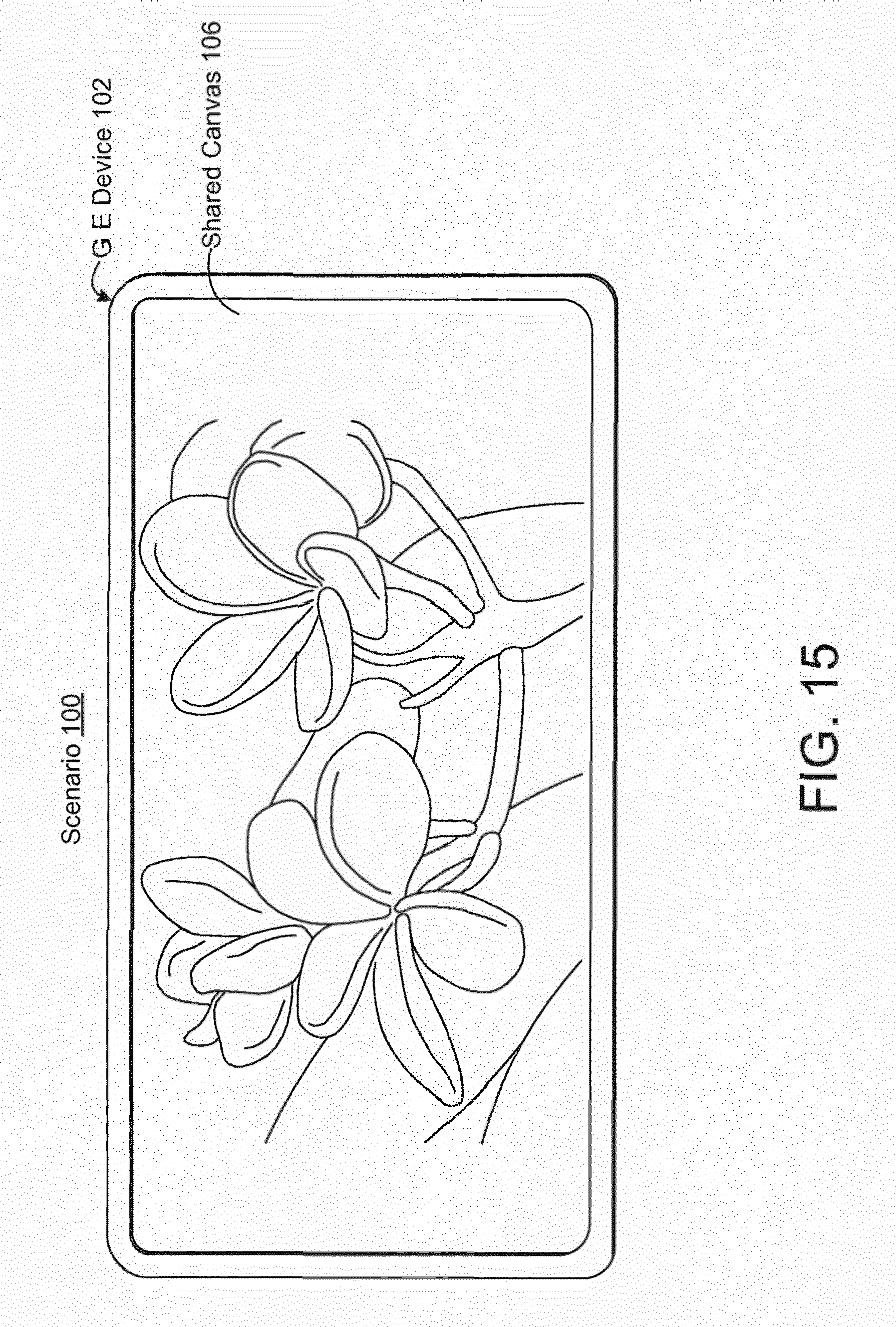 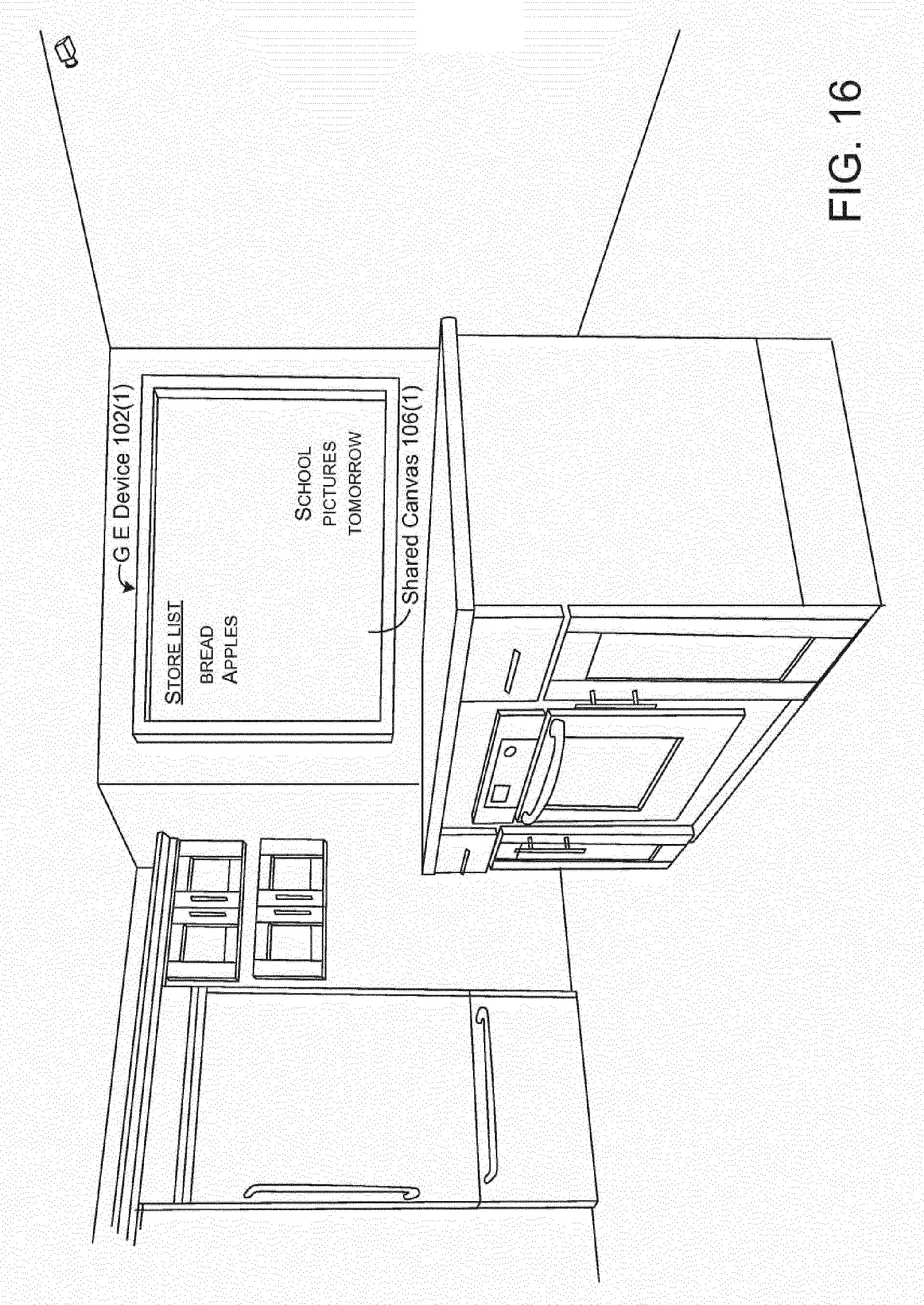 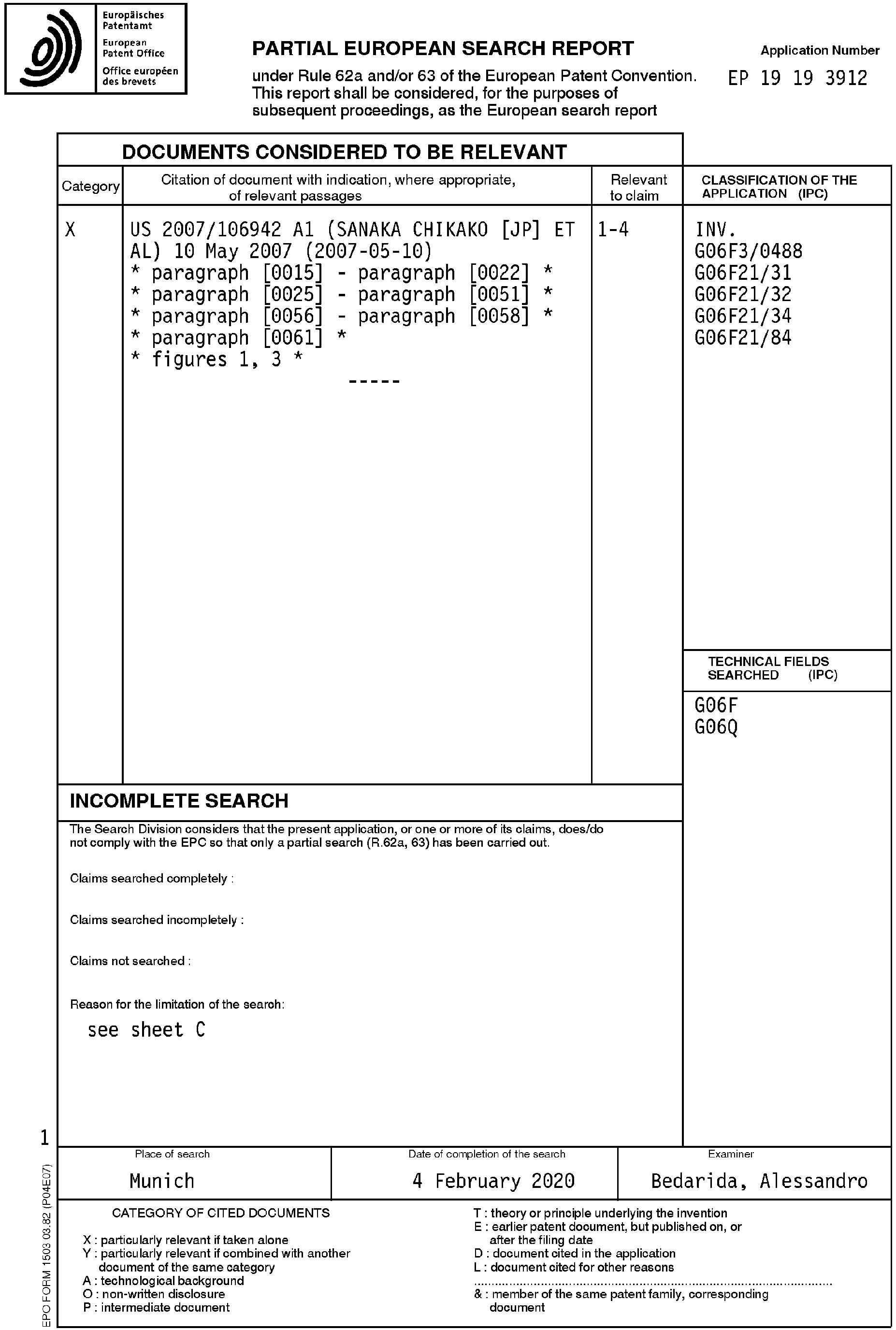 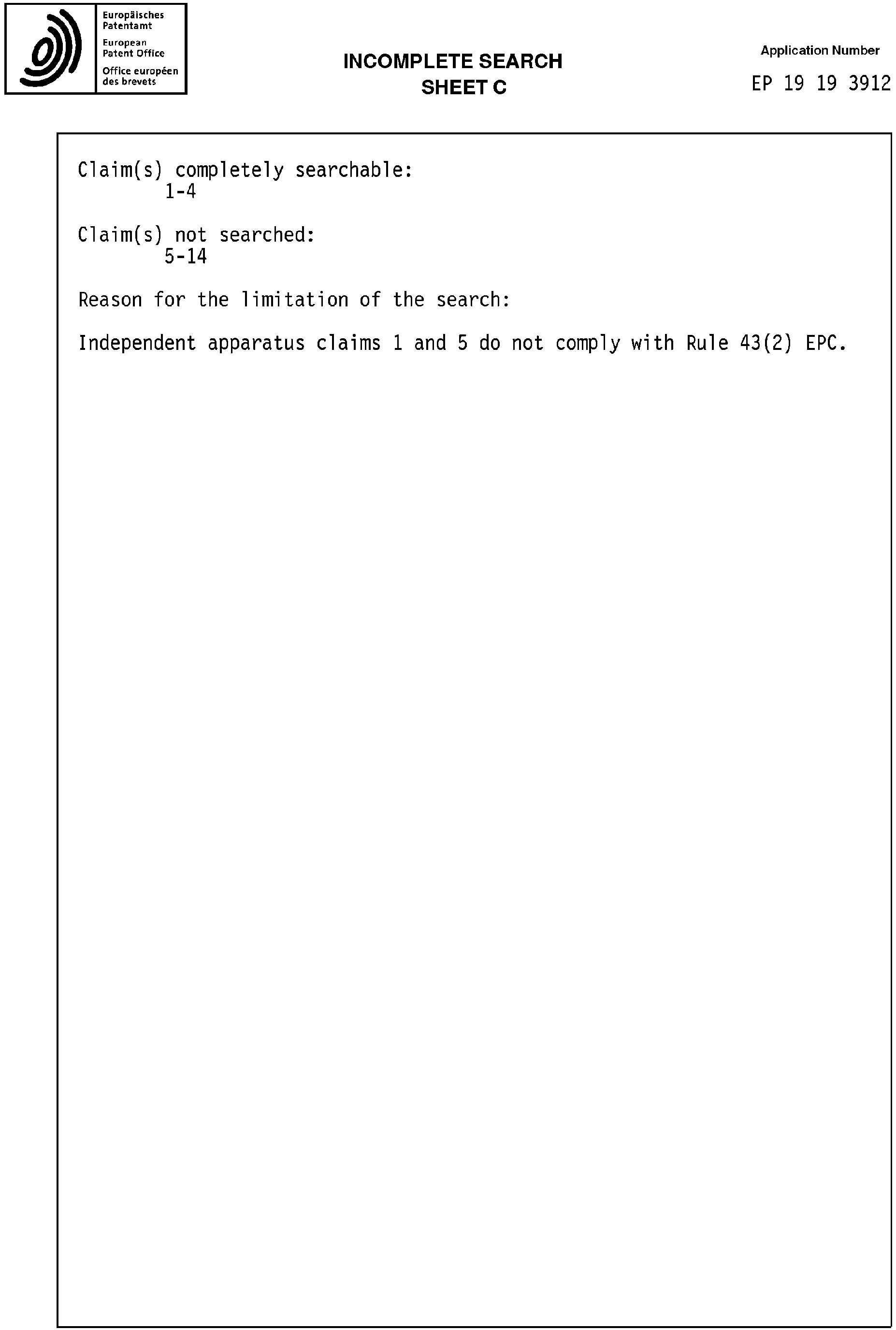 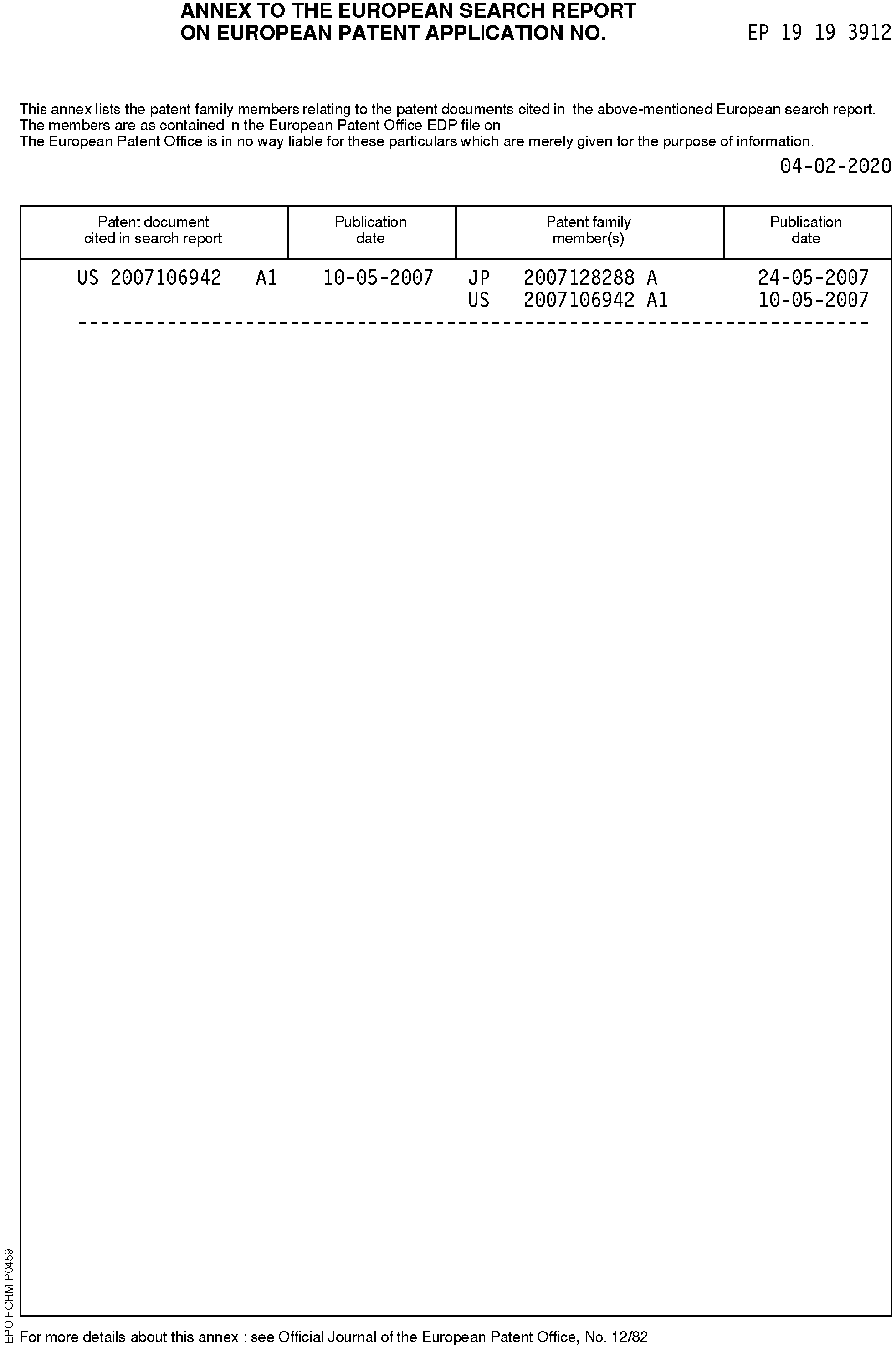