NOTICE OF COPYRIGHTS AND TRADE DRESS

[0002] This application claims priority to U.S. Provisional Patent Application No.: 62/734,638 entitled "METHOD OF PREPARING A LIKENESS OF A DECEASED HUMAN OR ANIMAL" filed on September 21, 2018, the contents of which are hereby incorporated by reference in their entirety.

FIELD OF THE EMBODIMENTS

[0004] Losing a friend or family member can be one of the most difficult misfortunes anyone can go through. During these emotionally challenging times, many people often find themselves struggling to cope with the passing of a loved one. Memorializing the dearly departed is an important part of the grieving process and up until now, the methods for honoring our loved ones has stayed the same. Prior to the 20th century, people were aware of the consoling power of the deceased's body. Practices included using the dead body or parts thereof to create memorials, post-mortem photographs, jewelry, shrines, and chapels. Examples of this include sculptures made of bone, and pictures made, at least partially, of hair. While these methods existed, many of them are archaic and do not offer the same comfort today that they once did. Today, there is an abundance of memorial artwork and keepsakes that people use to remember their loved ones. However, these pieces are impersonal, produced mechanically and have no artistic value, which often leave the grieving parties dissatisfied.
[0005] Nevertheless, within the past century, the rate of deceased people being cremated has increased from roughly 30% to roughly 70%. This results in there being an abundance of ashes, which are occasionally placed in urns with little-to-no connection with the deceased. Further, many of these urns are very low quality, and border on being kitschy. Making things even worse, the vast majority of people have the cremains of their loved ones thrown away or scattered, leaving nothing behind to remember the deceased.
[0006] This abundance of cremains and lack of options for people to turn those cremains into a memorable, dignified artistic remembrance presents an opportunity. As such, there is a need for a way for people to have a portrait of their deceased love one which is partially comprised of the cremains of said loved one, in a way that does not require an inordinate amount of time, making such a portrait widely available. This type of tribute provides the benefit of evoking fond emotions due to the quality and beauty of the work, provides an homage to the roots of memorialization, and provides a genuine relic of the deceased for the loved ones to enjoy in perpetuity.
[0007] While these articles may be suitable for the particular purpose employed, or for general use, they would not be as suitable for the purposes of the present disclosure as disclosed hereafter.
[0008] In the present disclosure, where a document, act, or item of knowledge is referred to or discussed, this reference or discussion is not an admission that the document, act, item of knowledge, or any combination thereof that was known at the priority date, publicly available, known to the public, part of common general knowledge or otherwise constitutes prior art under the applicable statutory provisions; or is known to be relevant to an attempt to solve any problem with which the present disclosure is concerned.
[0009] While certain aspects of conventional technologies have been discussed to facilitate the present disclosure, no technical aspects are disclaimed. It is contemplated that the claims may encompass one or more of the conventional technical aspects discussed herein.

[0010] An aspect of an example embodiment in the present disclosure is to provide a method for preparing a likeness of a deceased person or animal.
[0011] Accordingly, the present disclosure describes a method of preparing a likeness of a deceased human or animal. The method begins by providing an article, which has a top surface and a bottom surface, where the top surface is flat. The article may be rigid like a wooden board, or may be flexible like a canvas. The bottom surface may also be flat but the top surface is where the likeness of the deceased human or animal is placed, making such flatness of particular import. The method also requires that cremated remains of the deceased human or animal are provided for further processing.
[0012] The method proceeds by then having the article placed on a flat plane, where the bottom surface is adjacent to the flat plane and where the top surface is facing up. At least one layer a first adhesive mixed with a plurality of granular particles onto the top surface. Preferably between two to four layers are placed until the top surface is substantially coated with the mixture. Also preferably, these layers are placed via a high density foam roller. The granular particles may be sand, the cremains of the deceased human or animal, or some combination thereof. In various embodiments the granular particles and the first adhesive are mixed with at least one dye or other coloring agent. In other embodiments, the top surface is initially treated with at least one layer of paint, which is preferably gesso.
[0013] The method then allowing the layers of the first adhesive/granular particle mixture to dry. After those layers have dried, a final layer of a second adhesive on the top surface, which is preferably cellulose glue and a binder. The cremated remains must also be processed and this is done by grinding the remains into a powder. Once sufficiently pulverized, the ground remains are sifted onto the second adhesive to create a substantially even layer of ground remains on top. This is preferably done with a simple flour sifter, although other devices are suitable for this purpose such as a wire mesh, or other types of sifters that work with finer granulates. After an even coating has been achieved, the ground remains are pressed into the second adhesive, which is then allowed to dry. Once the second adhesive has dried, the method proceeds to remove any unattached ground remains from the dried second adhesive. The top surface is then airbrushed with a binder or fixative creating a prepared surface. Preferably, the fixative is a reworkable clear finish, such as the Workable Fixatif, produced by Krylon Products Group, a subsidiary of Sherwin-Williams Company.
[0014] After the surface has been prepared, a grayscale image of the deceased human or animal is printed on the prepared surface to create the likeness of the deceased human or animal. This may be done more than one time and is preferably done by a flatbed printer. It is desirable to place the prepared likeness of the deceased human or animal in a shadowbox.
[0015] The present disclosure addresses at least one of the foregoing disadvantages. However, it is contemplated that the present disclosure may prove useful in addressing other problems and deficiencies in a number of technical areas. Therefore, the claims should not necessarily be construed as limited to addressing any of the particular problems or deficiencies discussed hereinabove. To the accomplishment of the above, this disclosure may be embodied in the form illustrated in the accompanying drawings. Attention is called to the fact, however, that the drawings are illustrative only. Variations are contemplated as being part of the disclosure.
[0016] Implementations may include one or a combination of any two or more of the aforementioned features.
[0017] These and other aspects, features, implementations, and advantages can be expressed as methods, apparatuses, systems, components, program products, business methods, and means or steps for performing functions, or some combination thereof.
[0018] Other features, aspects, implementations, and advantages will become apparent from the descriptions, the drawings, and the claims.

BRIEF DESCRIPTION OF THE PREFERRED EMBODIMENTS

1. A method of preparing a likeness of a deceased human or animal, comprising the steps of:

providing an article having a top surface and a bottom surface, wherein the top surface is flat;

providing cremated remains of the deceased human or animal;

placing the article on a flat plane, wherein the bottom surface is adjacent to the flat plane and where the top surface is facing up;

placing a layer of a first adhesive mixed with a plurality of granular particles onto the top surface;

repeating the previous step as needed until the top surface is substantially coated with the first adhesive mixed with a plurality of granular particles;

allowing the layers from the previous two steps to dry;

placing a final layer of a second adhesive on the top surface;

preparing the cremated remains by grinding the remains;

pressing the substantially even layer of ground remains into the second adhesive;

allowing the second adhesive to dry;

removing any unattached ground remains from the dried second adhesive;

airbrushing the substantially even layer of ground remains with a binder or fixative creating a prepared surface; and

2. The method of claim 1, wherein the article is rigid.

3. The method of claim 2, wherein the article is a wooden board.

4. The method of claim 1, wherein the article is flexible.

5. The method of claim 4, wherein the article is canvas.

6. The method of claim 1, wherein the first adhesive is mixed with sand.

7. The method of claim 1, wherein the first adhesive is mixed with a portion of the cremated remains.

8. The method of claim 1, further comprising the step of mixing the first adhesive and the plurality of granular particles with at least one dye.

9. The method of claim 1, further comprising the step of initially treating the top surface with at least one layer of paint.

10. The method of claim 1, where the layers of the first adhesive mixed with the plurality of granular particles is placed via a high density foam roller.

11. The method of claim 1, wherein the second adhesive is a cellulose glue and binder mix .

12. The method of claim 1, wherein the fixative is a reworkable clear finish.

13. The method of claim 1, further comprising placing the likeness of the deceased human or animal in a shadowbox. 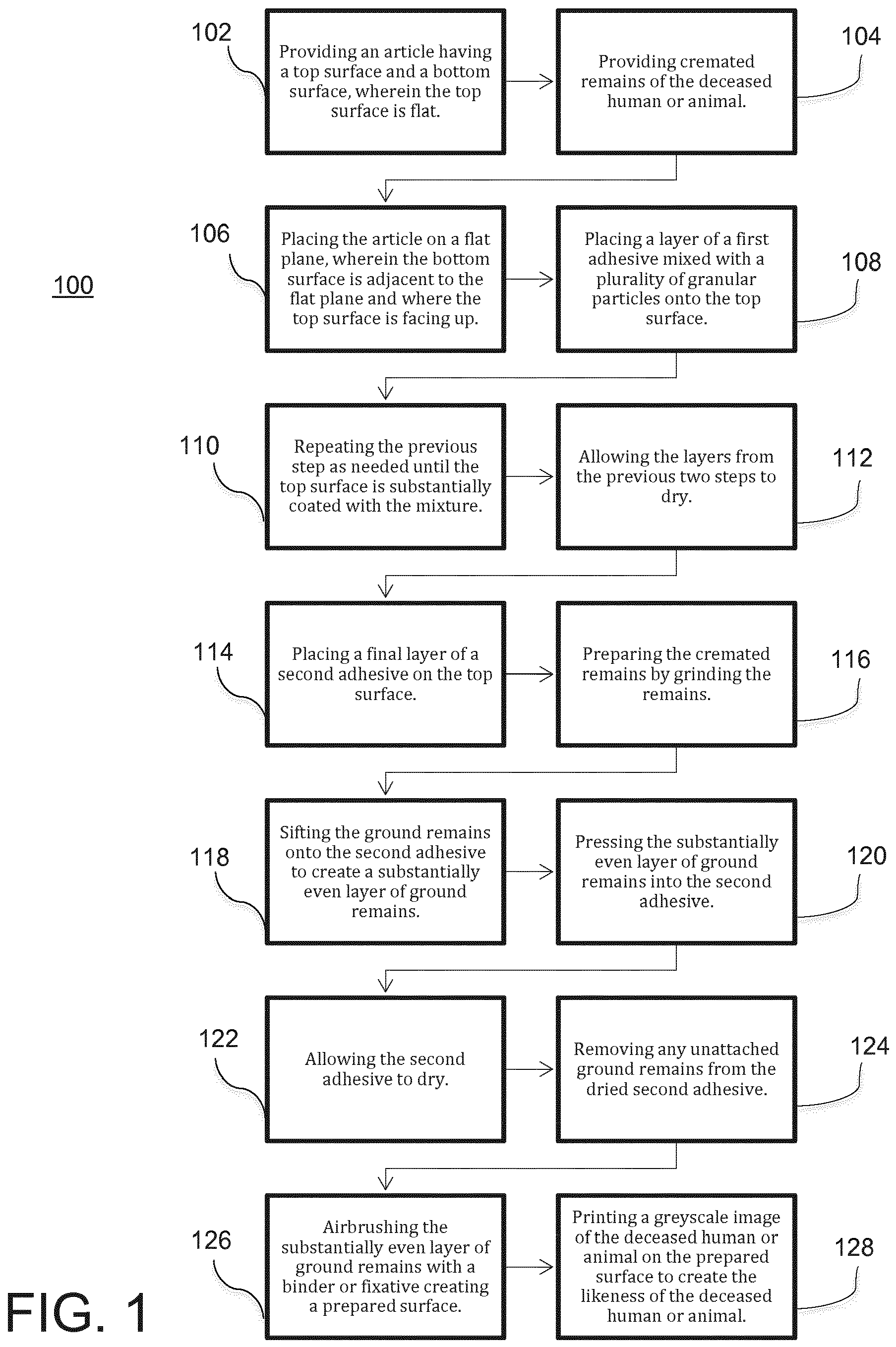 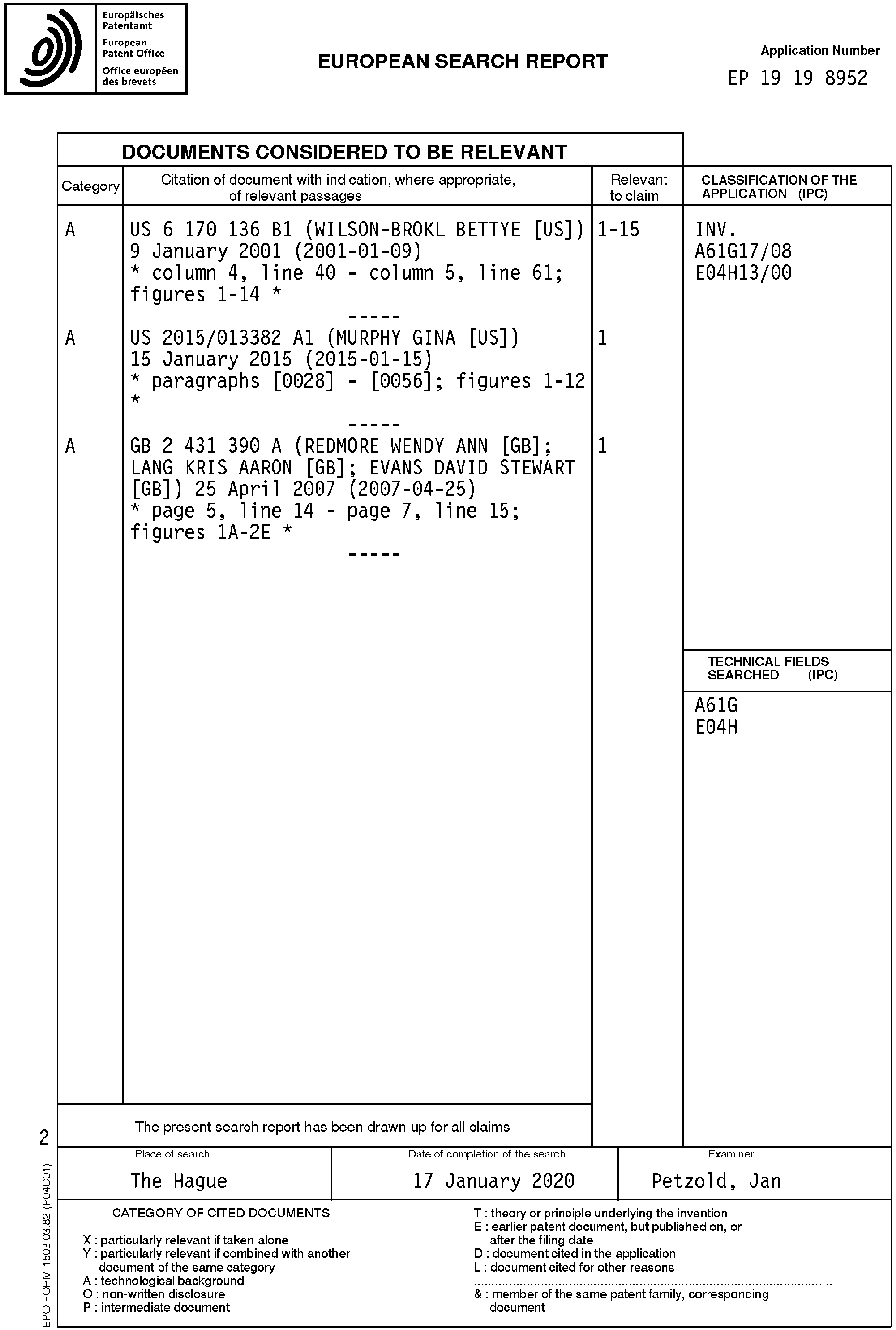 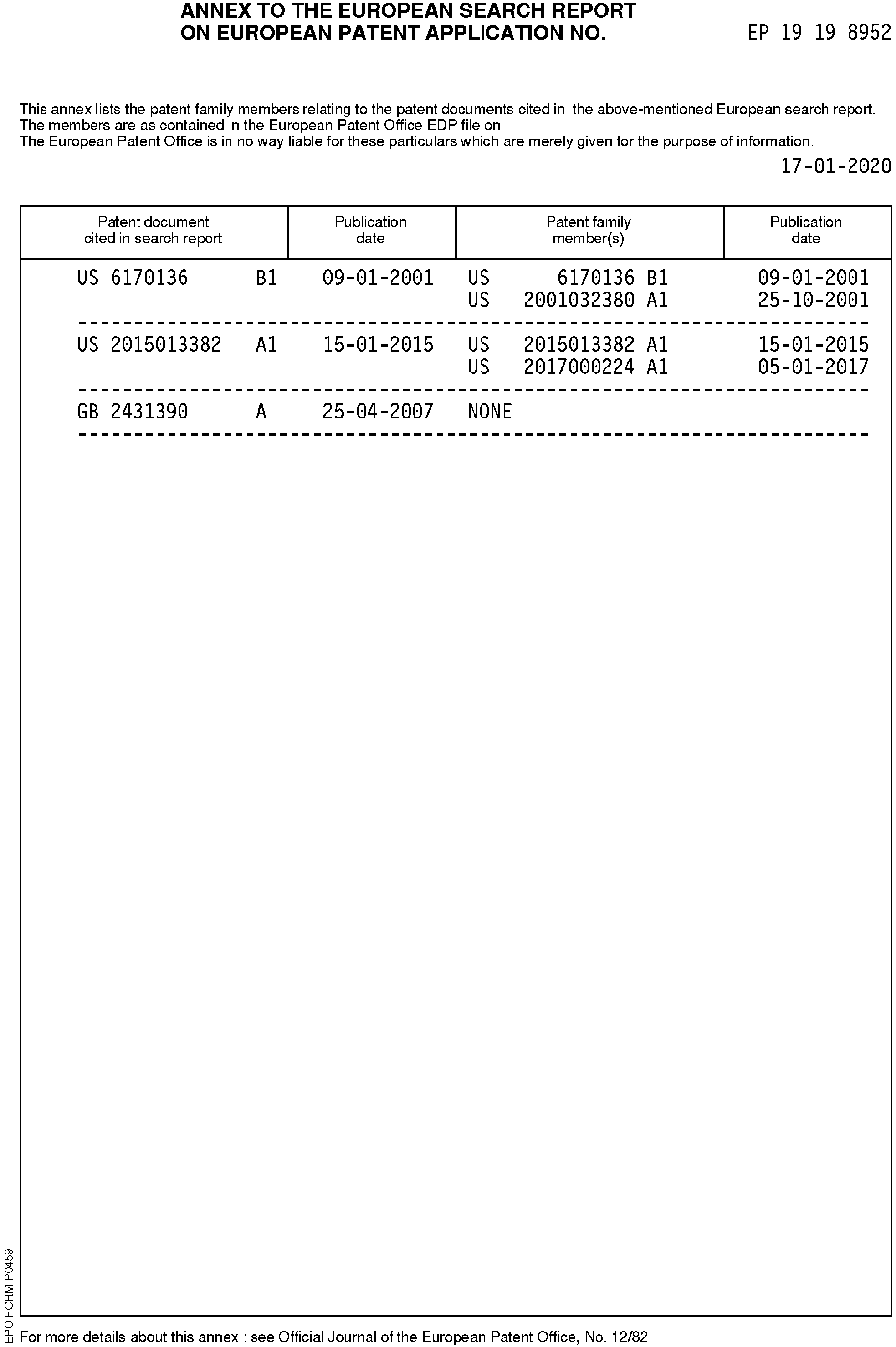