[0001] The present invention relates to a recycling method of dihydrate gypsum from waste gypsum boards.

[0002] The present inventors and others have succeeded in commercially recycling dihydrate gypsum from waste gypsum boards (Patent Documents 1-3). Patent document 1 (JP 2010-13304 A) discloses to pulverize and then to calcine waste gypsum boards, to further pulverize the calcined gypsum more finely, and to mix the finely powdered gypsum with water. The slurry of water and the gypsum is cured to crystalize gypsum particles. Patent document 1 discloses the fine pulverization makes the average particle size of the crystalized gypsum particles larger.
[0003] Patent Document 2 (WO 2014/141926 A) discloses to warm the inlet of the mixing tank containing water for gypsum granules such that scales resultant from the reaction of gypsum and water vapor do not clog the inlet. The temperature referred to in the document is that of the inlet itself and differs from the temperature of the gypsum granules.
[0004] Patent Document 3 (JP 6 336 385 B) discloses a structure of the mixing tank for mixing gypsum granules with water that is configured to prevent the inclusion of surrounding air into the slurry.

Problems to be Solved by the Invention

[0007] The present inventors have noticed a foam layer covering the slurry surface is generated when gypsum granules are dropped into water for preparing the gypsum slurry. The foam includes a large quantity of gypsum and prevents uniform dispersion of gypsum into the slurry. Therefore, the particle growth of gypsum is hindered and aggregated particles of gypsum are included in the dihydrate gypsum particles. These facts make the quality of dihydrate gypsum lower. Further, the foam causes cavitation in a slurry pump so that the feeding of the slurry is made not uniform.
[0008] The object of the invention is to reduce the foaming when gypsum granules are dropped into water so that the gypsum granules are promptly dispersed in the slurry.

Means for Solving the Problem

[0009] A recycling method of dihydrate gypsum from waste gypsum boards according to the invention comprises:

[0015] [Fig. 1] A process diagram indicating a recycling method of dihydrate gypsum according to an embodiment.

Detailed Description for Carrying out the Invention

[0016] An embodiment for carrying out the invention will be described in the following. The scope of the invention shall be construed according to the claims, in consideration with the specification and well-known art, as ordinary technicians in the art understand.

[0029] Hemihydrate gypsum whose temperature just before dropped was kept at 80°C. Except for this, dihydrate gypsum particles were crystalized in the same way to the embodiment 1. Also in this case, when dropping the hemihydrate gypsum, the liquid surface was covered with a foam layer having a thickness of about 5 mm. The average particle size of the crystalized dihydrate gypsum was 43 µ m after 40 hours from starting the supply, and aggregated gypsum particles were observed in the slurry.
[0030] The relation between the temperatures of gypsum pieces and periods till they sank was measured with various gypsum temperatures just before dropped and various water temperatures. Gypsum board waste was heated to 130°C for converting into hemihydrate gypsum, cubic pieces having each edge of about 10 mm and a weight of 0.6 g were cut with a cutter-knife. These cubes were re-heated and dropped into a beaker containing water of 200 mL and the periods till the cubes sank in the water were observed. The results are shown in Table 1.
Table 1

said method being characterized in that temperature of the gypsum granules just before dropped into water is made 90 °C or higher.

2. The recycling method of dihydrate gypsum from waste gypsum boards according to claim 1,
being characterized in that the gypsum granules are dropped into water without pulverization after said calcination.

3. The recycling method of dihydrate gypsum from waste gypsum boards according to claim 2,
being characterized in that the temperature of the gypsum granules just before dropped into water is kept at 90°C or higher by residual heat when calcined. 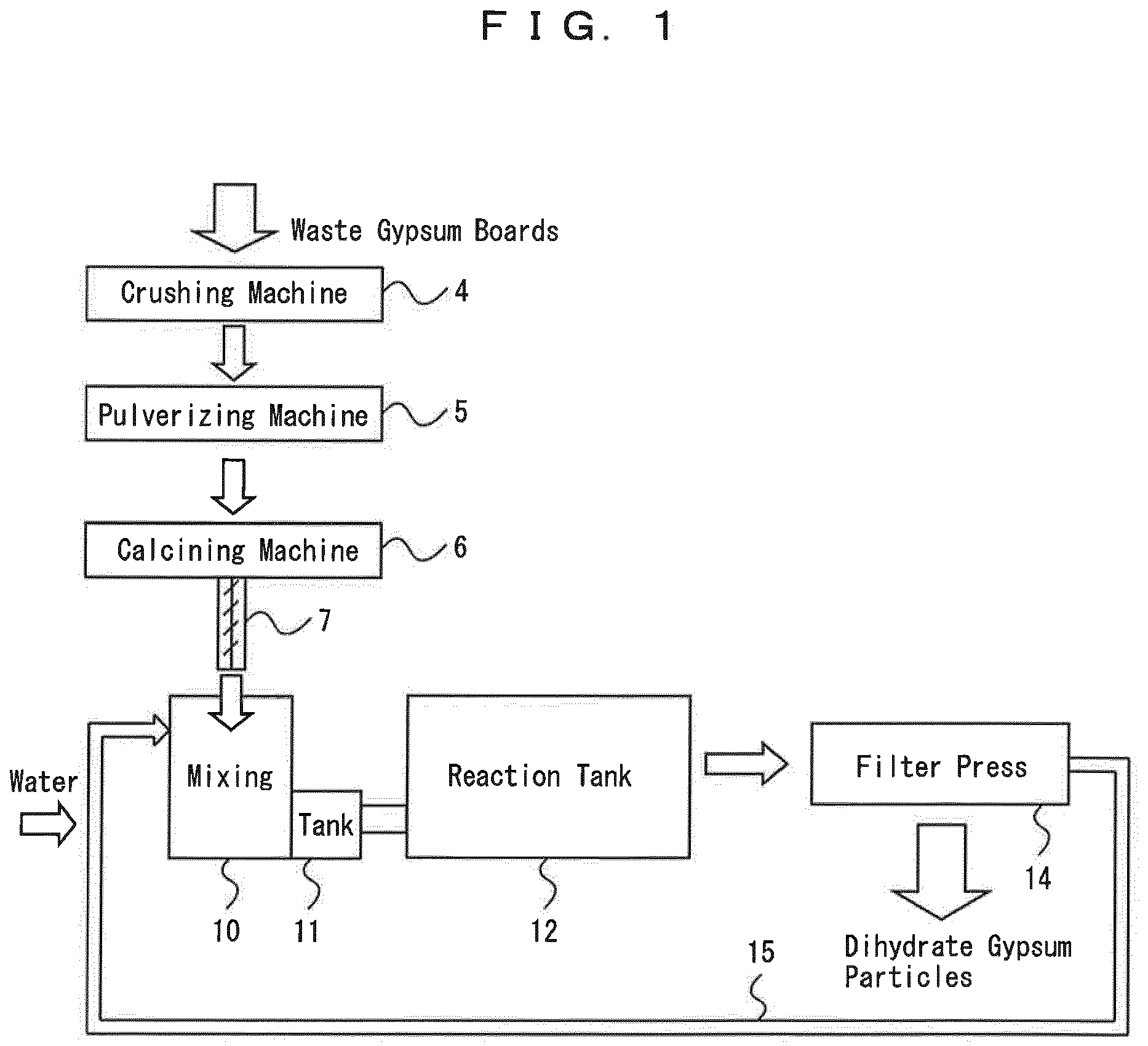