[0014] The present invention proposes a simple and generally applicable concept that solves the problem of the 'missing wedge' problem in electron microscopy by introducing sample supports with a three-dimensional structure. One approach wraps up a carbon surface of a thin carbon layer. Crystals to be investigated stick to the curved surface and thus have many different orientations. The second approach covers a sample grid with thin nylon fibres with a diameter similar to the crystal size. This creates a mesh that positions crystals in random orientations. The efficiency of each approach was determined using crystals of ZSM-5, a zeolite of the MFI framework. The habit of ZSM-5 crystals is akin a flat box. The direction of the short crystallographic c-axis coincides with the short macroscopic edge of the crystal. ZSM-5 crystals are therefore an ideal representative of submicron samples affected by preferred orientation. The chemically leaching of ZSM-5 leads to a cylindrical cavity that runs parallel to the crystallographic c-axis. This provides optical control of the preferred orientation of the crystallites (Fig. 1d). Fig. 1 illustrates that a conventional sample support leads to incomplete data. (a) When the crystal is centered between grid bars, the maximum rotation range is about 140°. (b) A crystal close to the grid bar reduces the maximum rotation range. (c) TEM micrograph of ZSM-5 crystals with preferred orientation. (d) The dark rim without interruption shows the leached channel parallel to the crystallographic c-axis.
[0015] The effect of incomplete data is shown in Figure 2. With complete data, the electrostatic potential map is spherical centered about the every framework atom (Fig. 2(a)). Already with 10% data missing, the elongation of the map becomes obvious (Fig. 2(b-d)). The potential map elongates in the direction of the missing wedge. The elongation increases with increasing volume of the missing wedge. Figure 2 schematicalls illustrates a small section of the ZSM-5 framework. Missing wedge data leads to elongated electrostatic potential maps. (a) complete data. (b) missing wedge with 10° opening, 90% data completeness. (c) Missign wedge with 30° opening, 66% data completeness. (d) Missing wedge with 50° opening, 45% data completeness. (e) to (h) illustrate the missing volume in reciprocal space. Grey shaded: observed data, white wedge: missing data. Crystallographic b-axis in light grey, c-axis in dark grey.

[0016] ZSM-5 crystals were deposited on a conventional, flat carbon support. Gentle striking of the carbon support with a fine-haired brush caused the carbon film to wrap up (Fig. 3(a)). Crystals attached to the carbon film surface, for example by cohesion or adhesion, followed the curvature induced by the soft brushing and thus changed their orientation (Fig. 3(a) and (b)). The degree of wrapping per mesh depends on the applied pressure and can be conveniently monitored with a light microscope (Fig. 3(c)). The direction of striking provides some control of the direction of the wrapping. Data of nine different crystals were collected. Merging all nine data sets together yielded 100% complete data. Subsequently, poorly fitting data sets, judged by the correlation coefficient of intensities between pairs of data sets, were manually excluded from merging as long as this did not reduce the data completeness. This way the number of required data sets could be reduced to only four data sets that yielded 100% complete data (Fig. 3(d)). A deterioration of the data quality was not observed. For each data set, it was possible to distinguish the crystallographic a-axis from the crystallographic b-axis based on data statistics.
[0017] Figure 3 illustrates the complete data from wrapped carbon grids. (a) STEM micrograph of wrapped carbon with attached ZSM-5 crystals. (b) Cartoon illustrating the randomized orientation. (c) The wrapping is visible with a light microscope. (d) Map calculated from 100% complete data from six crystals results in reliable atom positions (T-O bonds of ZSM-5 shown as bars).

[0018] Nylon fibres with a diameter of about 100 nm were deposited on commercially available carbon grids. This created a chaotic network with open spaces of various diameter (Fig. 4(a), (b)). The density was controlled with the deposition duration and thus could be adjusted to the particle size of the investigated crystals: lower density leaves larger holes. The size of the ZSM-5 crystals was between 400 and 600 nm. Hence, the fibrous network and zeolite crystals have more or less matching dimensions. This match of dimensionality can be an important prerequisite for the sample holder. A network based on carbon nanotubes is applicable for single particle analysis, but it would appear flat for the large zeolite crystals. Fig. 4(c) shows zeolite crystals entangled in the nylon fibre network. The variation of orientation is less obvious than with the wrapped carbon film. Diffraction data were collected randomly from eight different crystals. The oscillation range for every crystal varied between 115° and 150°. Despite the seemingly lower variation in orientation, complete data was reached by merging diffraction data from four crystals (Fig. 4(d)).
[0019] Figure 4 depicts the complete data from grids coated with 100nm nylon fibres, (a) TEM micrograph of a nylon coated sample support with low fibre density (on top of lacey carbon). (b) TEM micrograph of a nylon coated sample support with mid fibre density. (c) TEM micrograph of a nylon coated sample support with high fibre density. (d) TEM micrograph of ZSM-5 crystals entangled in nylon fibres (on top of lacey carbon). (e) Four data sets reach 100% data completeness. (f) Map calculated from 100% complete data from six crystals results in reliable atom positions (T-O bonds of ZSM-5 shown as bars).
[0020] Imaging and diffraction techniques based on transmission electron microscopes are impeded by incomplete data, as electrons do not penetrate the sample support. In some applications, in particular in crystallography, multiple data sets can be merged to reach complete data. However, most crystals grow with a flat shape and lie on the sample support in preferred orientation. This is ruining the attempt to reach data completeness by merging.
[0021] The general idea of a topographically modulated surface of a probe support and two different types of sample support modification are disclosed herein that lead to a randomisation of the sample orientation and thus to complete data from very few measurements. Both types of sample support are applicable to any samples, both crystalline and non-crystalline, for which 3D structural information are to be obtained through the transmission of electron radiation or electromagnetic radiation like X-rays. Therefore, it will contribute to a deeper understanding of the structure and so the function of many materials. Both types of sample supports are easy to produce and have different properties (see Table 1). This provides a choice depending on the application. Wrapping the carbon layer of the sample support is an easy and fast method. The concept can be further refined through the precise engineering of a sample support, e.g. based on graphene. Plastic fibers, such as nylon fibres, are more reproducible and offer more control: both the fiber diameter and the fiber density can be adjusted to the specimen. The concept of nylon fibres is also suitable for sample deposition in a liquid environment and can also be used as a sieve, e.g. for the study of protein crystals in combination with vitrification. As also tomography can benefit from averaging of multiple data sets, the application of these grids may find applications outside the wide field of crystallography.

[0024] A nylon nanofiber grid supported by copper TEM grids (Lacey F/C 400 mesh Cu, Ted Pella Inc., USA) was prepared by an electrospinning process. Pellets with 15 wt% of Nylon-6 (particle size 3 mm, Sigma Aldrich, USA) dissolved in formic acid (purum ≥ 98.0%, Fluka, Germany) and high voltage (20 kV) was applied to the solution through a stainless steel needle on a plastic syringe. A syringe pump (NE-300, New Era Pump Systems Inc., USA) kept feeding the solution to the electrospinning system with 1.5 µl/min and the TEM grid was placed on the collecting plate made of stainless steel. Electro-spun nylon nanofibers were deposited on the grid for two minutes. The prepared nylon nanofiber grids were dried in the ambient condition for 24 hours.

[0025] The MFI nano crystals were either applied as dispersion (1.5 mg/ ml) or as dust cloud generated by a paintbrush on a commercially available continuous carbon TEM grid (Ted Pella, 01843-F) respectively the nylon grids. The continuous carbon TEM grids were plasma-treated before. A fine-hair paintbrush was used to wrap up the continuous carbon film on the grids in a controlled way. According process can be observed by eye or targeted folding procedures of single meshes aimed with a light microscope. The grids were mounted with the mesh diagonal perpendicular to the rotation axis of the TEM sample holder.

[0026] Data was collected at room temperature on a Tecnai F30 TEM equipped with a Schottky Emitter at an energy of E=200 keV, i.e. wavelength λ = 0.02508 Å. Dose in TEM Bright field mode was about 0.01 e- Å-2 (the precision of the reading is limited to two digits and displayed 0.00--0.01 e- Å-2. The Goniometer speed was accessed by a hand-written script and operated with a speed of 2.9°/ s. For data acquisition an Eiger X 1M proto-type detector was mounted on the TEM before. The read out time of the detector was set to 100 Hz and the data collected in continuous read-out mode at camera lengths of 715 and 495 mm. Resulting datasets were compressed in the HDF5 file format. Integration and optimisation of the data was executed by the program XDS. To control the correct assignment of the a- and b-axis all data sets were solved with direct methods with SHELXT in Laue group mmm. Only the framework atoms Si and O were provided without explicit atom counts. In some cases, SHELXT suggested either of the long unit cell axes as a-axis. In such cases, model refinement was carried out to select the setting with the better R1-value. From thereon, data of MFI crystals was processed without space group constraints, i.e. in Laue group 1-. Afterwards data was merged by the program XSCALE. The merged datasets again were solved by direct methods with the program SHELXT.

1. A sample support for samples in the submicron range in imaging and diffraction techniques, comprising a topographically modulated surface; said surface comprising ridge-like and terrace-like structures having dimensions in the order of magnitude to the size of the submicron-sized sample.

2. The sample support according to claim 1 wherein the topographically modulated surface is generated by brushing a carbon film having a thickness lower than 1 µm.

3. The sample support according to claim 2 wherein the 3D crystalline probes are distributed over the topographically modulated surface by the brushing.

4. The sample support according to claim 1 wherein the topographically modulated surface is generated by distributing nanotubes and/or nano-cylinders, made for example of carbon and/or plastic, such as nylon, on a support grid, such as a carbon support grid.

5. The sample support according to claim 4 wherein the nanotubes and/or nano-cylinders have a diameter of 50 to 1000 nm.

6. An electron crystallography system comprising a probe support according to the any of the preceding claims. 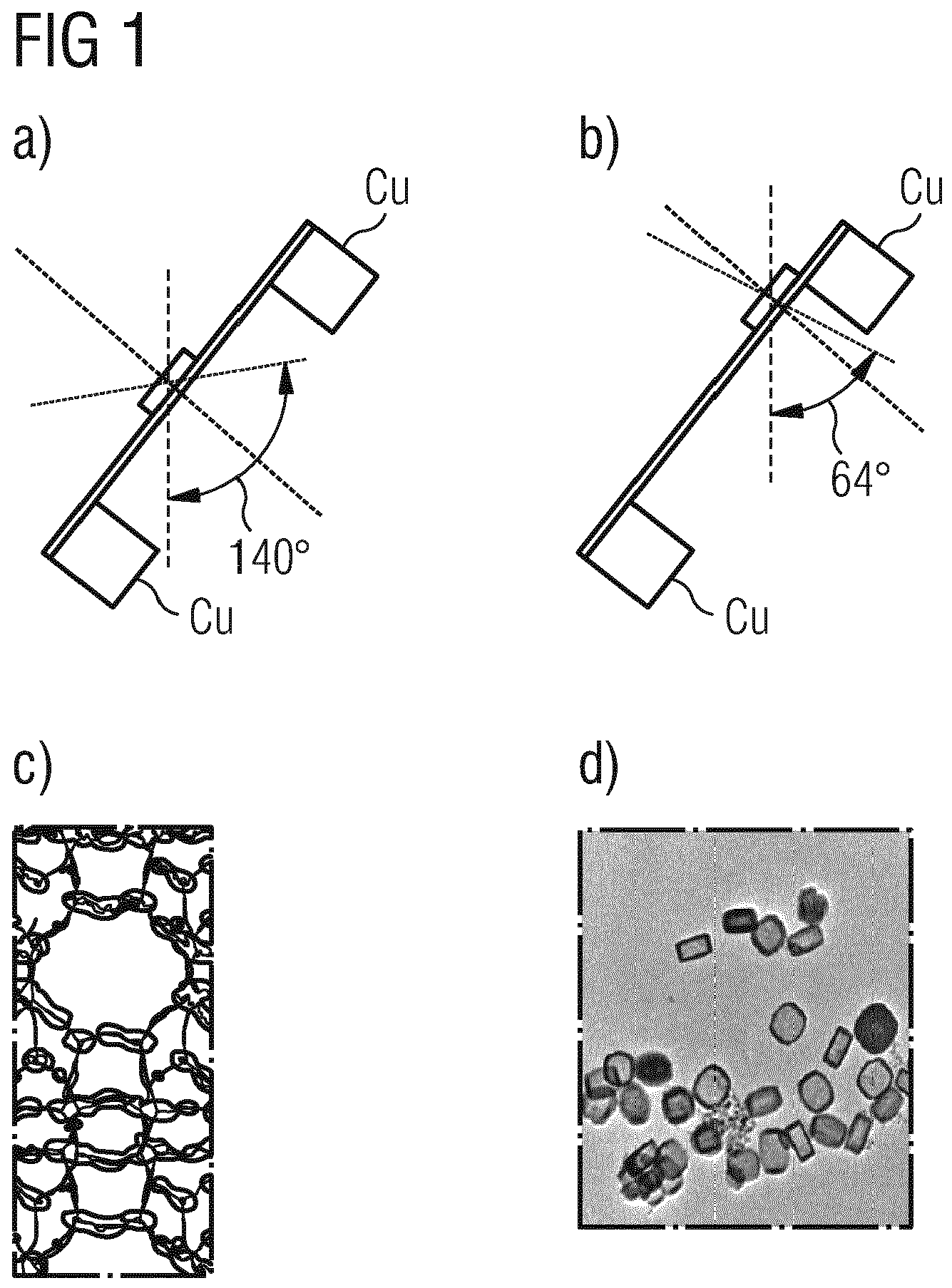 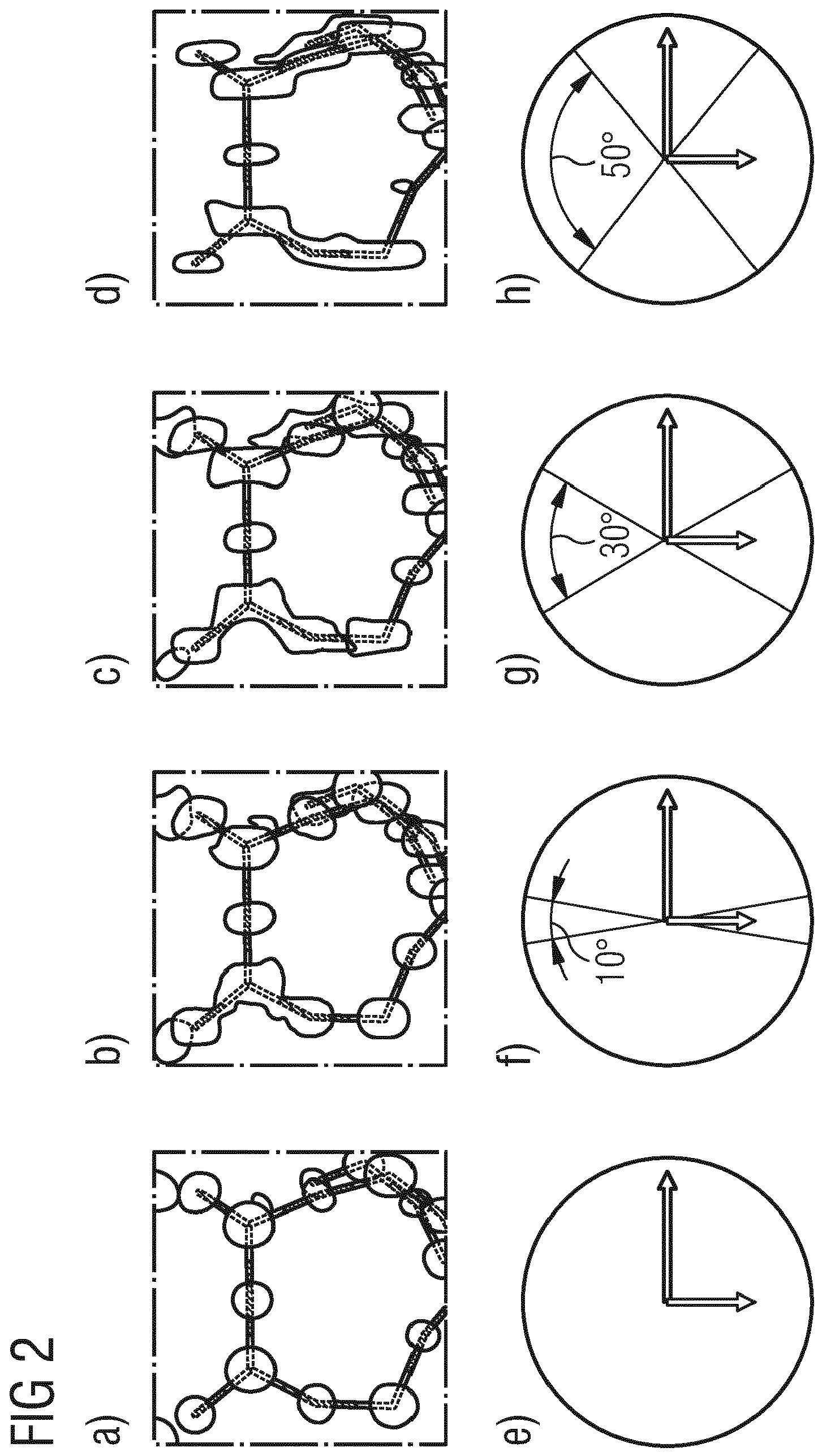 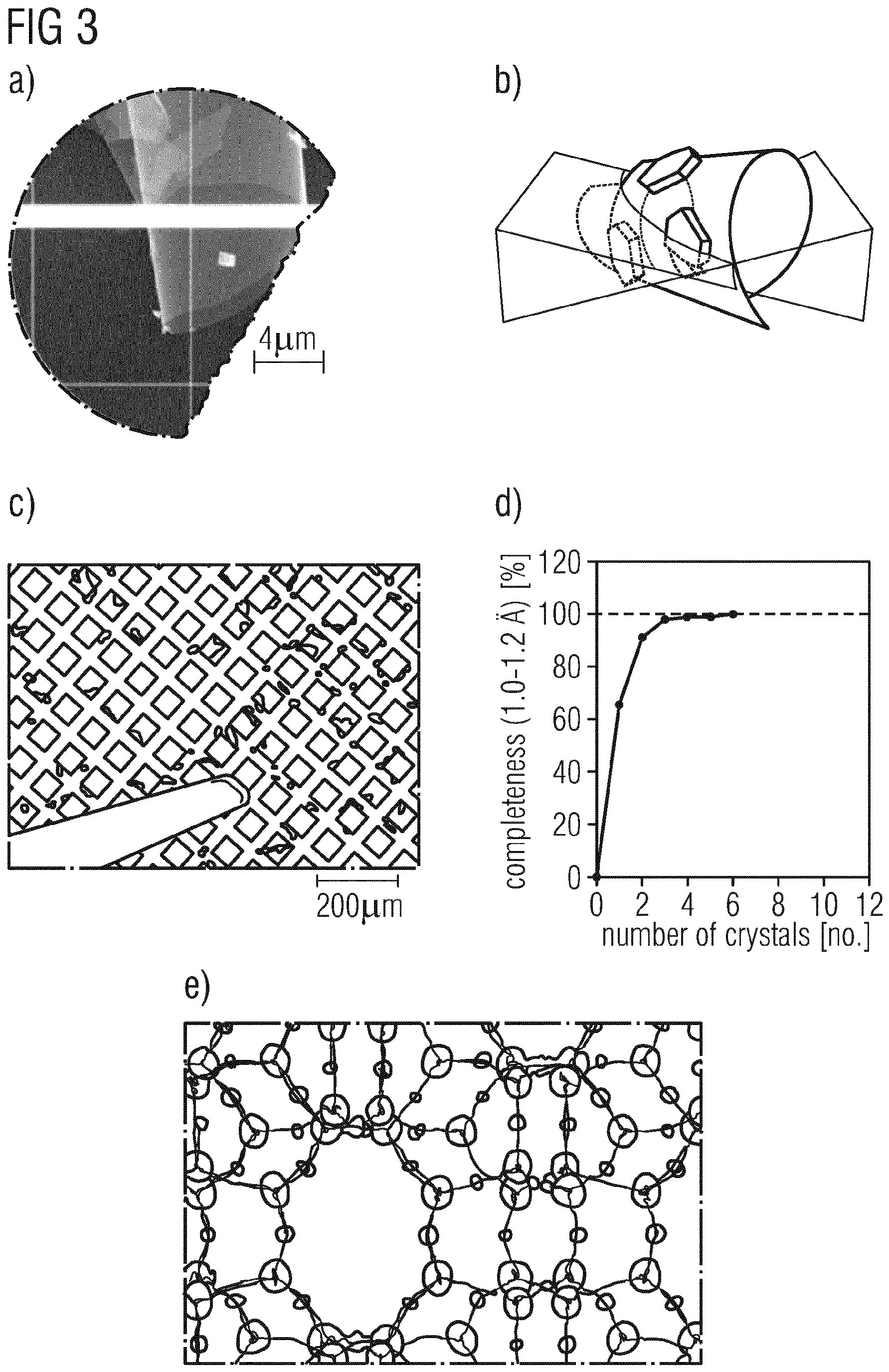 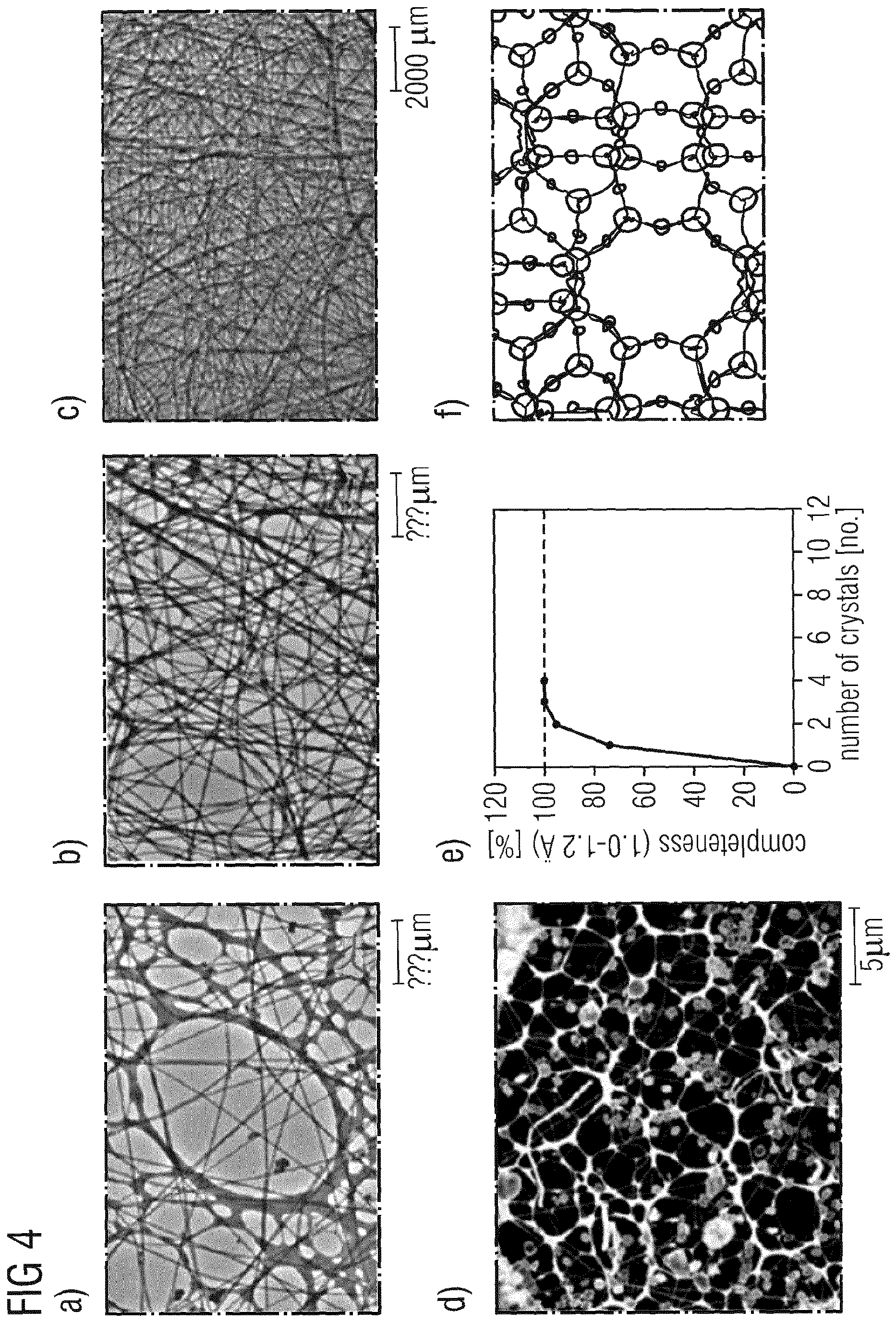 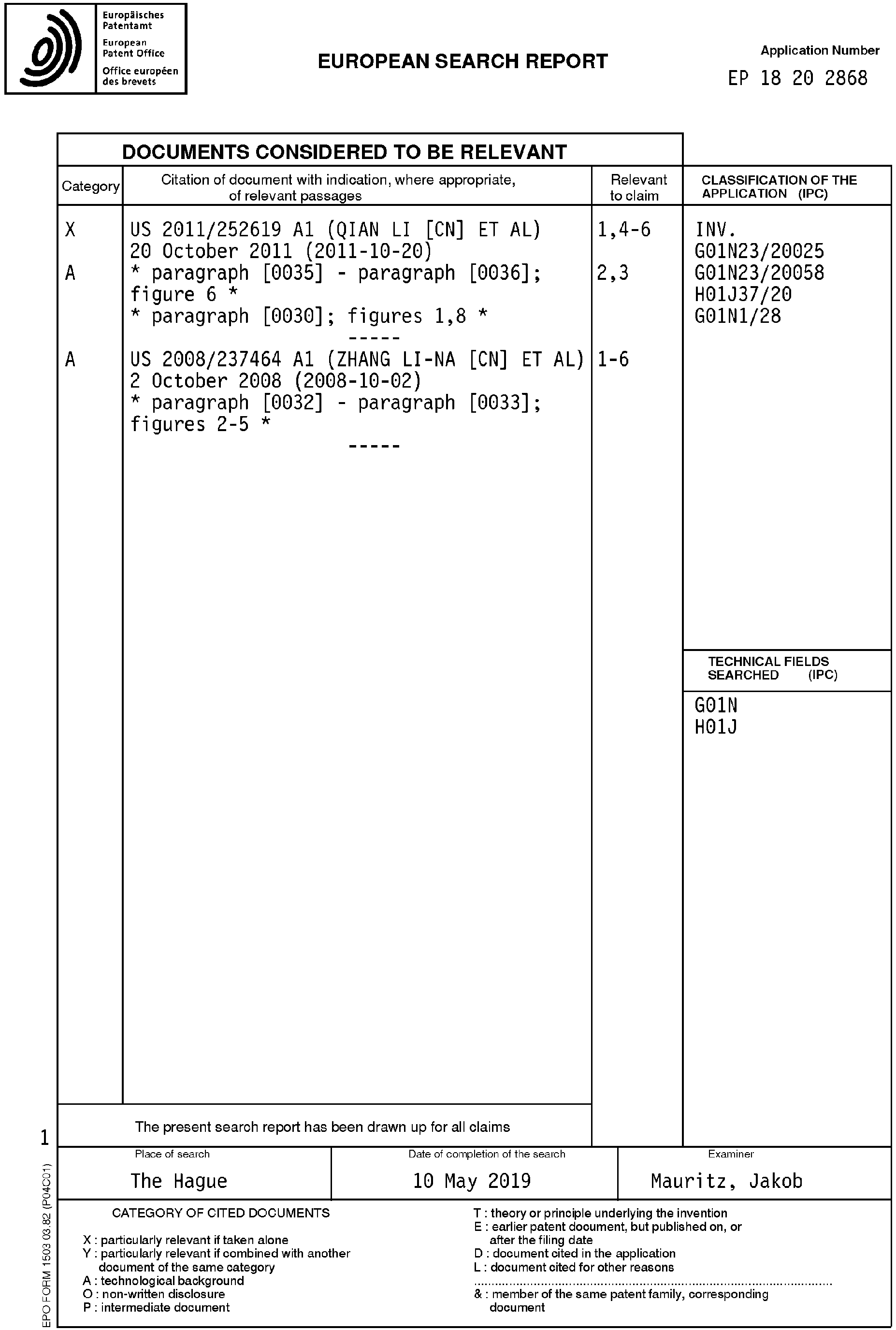 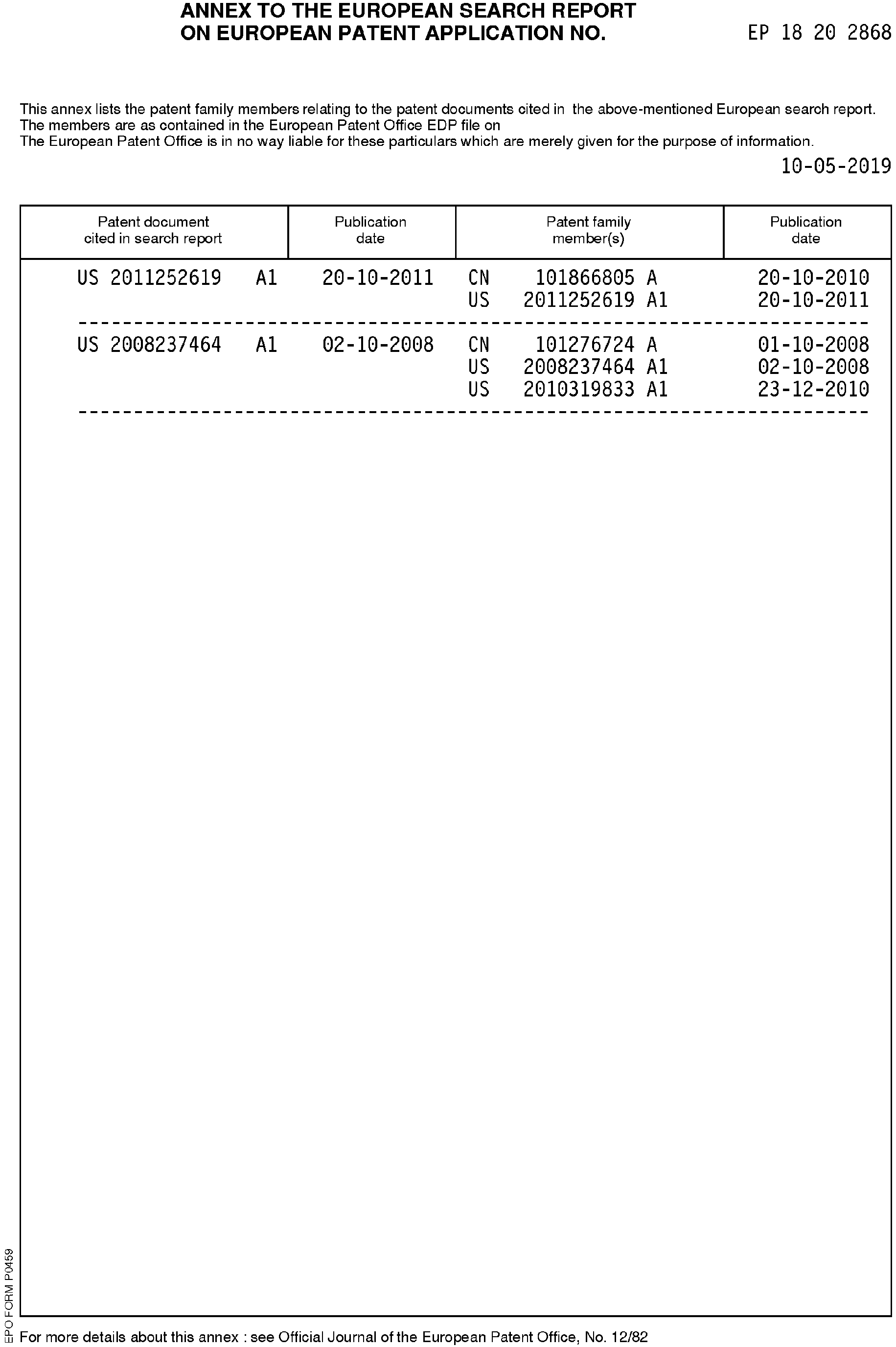