[0003] The practice of Binaural Room Impulse Response (BRIR) processing is well known. According to known methods, a real or dummy head and binaural microphones are used to record a stereo impulse response (IR) for each of a number of loudspeaker positions in a real room. That is, a pair of impulse responses, one for each ear, is generated. A music track may then be convolved (filtered) using these IRs and the results mixed together and played over headphones. If the correct equalization is applied, the channels of the music will then sound as if they were being played in the speaker positions in the room where the IRs were recorded.
[0004] The BRIR and its related Binaural Room Transfer Function (BRTF) simulate the interaction of sound waves from a loudspeaker with the listener ears, head and torso, as well with the walls and other objects in the room. Room size affects sound as do the sound reflection and absorption qualities of the walls in the room. Loudspeakers are typically encased in an enclosure the design and composition of which affect the quality of the sound. When the BRTF is applied to an input audio signal and fed into separate channels of headphones, natural sounds are reproduced with directional and spatial impression cues that simulate the sound that would be heard from a real source in the same position as the loudspeaker in a real room as well as with the sound quality attributes of the loudspeaker.
[0005] The actual BRIR measurements are typically made by seating an individual in a room and measuring with in-ear microphones the impulse responses from a loudspeaker. The measurement process is extremely time consuming requiring the patient cooperation of the listener as a large number of measurements are taken for the different loudspeaker positions relative to the head location of the listener. These typically are taken for at least every 3 or 6 degrees in azimuth in the horizontal plane around the listener but can be fewer or greater in number and also can encompass elevation locations relative of the listener as well as measurements relating to different head tilts. Once all of these measurements are completed, a BRIR dataset for that individual is generated and made available to apply to audio signals typically in the corresponding frequency domain form (BRTF) to provide the aforementioned directional and spatial impression cues.
[0006] In many applications the typical BRIR dataset is inadequate for the listener's needs. Typically, BRIR measurements are made with the loudspeaker at about 1.5 m from the listener's head. But often the listener might prefer to perceive the loudspeaker to be positioned at a greater or lesser distance. For example, in music playback, a listener might prefer that stereo signals appear to be positioned at 3 or more meters from the listener. In video gaming situations an audio object might be positionable with the proper directionality using the BRTFs but the distance of the object inaccurately represented by the distance associated with the single BRTF dataset available. At best, even with attenuation applied to the signal to convey the sense of an increased distance from the measured listener head to loudspeaker distance, the perception of distance is indefinite. It would be useful to have available BRIRs customized for the different listener head to speaker distances. Further still, due to measurement constraints the loudspeaker used in the BRIR measurement process may have been limited in size and/or quality whereas the listener would have preferred that the BRIR dataset had been recorded using a higher quality loudspeaker. While these situations can be handled in some cases by remeasuring the individual under the changed circumstances, that would be a costly, time-consuming approach. It would be desirable if selected portions of the BRIR for the individual could be modified to represent changed loudspeaker-room-listener distances or other attributes without resorting to remeasurement of the BRIR.

[0007] To achieve the foregoing, the present invention provides in various embodiments a processor configured to provide binaural signals to headphones to include room impulse responses to provide realism to the audio tracks. Modifications to BRIRs are provided by applying one or more techniques to one or more segmented regions of BRIRs. As a result, one or more of the loudspeaker-room-listener characteristics are modified without requiring a remeasurement of an individual.

FIG. 1 is a diagram illustrating graphically the different regions of the BRIRs subject to processing in accordance with one embodiment of the present invention.

FIG. 2 is a block diagram illustrating modules for the modification of BRIRs without requiring additional in ear measurements in accordance with embodiments of the present invention.

FIG. 3 is a diagram of a room illustrating speaker and room characteristics that can be targeted for modification in BRIRs by processing one or more regions of the BRIRs in accordance with some embodiments of the present invention.

FIG. 5 is a diagram illustrating steps in modifying BRIRs to substitute a different room or to modify the characteristics of the selected room without requiring additional in-ear measurements in accordance with embodiments of the present invention.

segmenting a first BRIR into at least 2 regions;

segmenting a first BRIR into at least 2 regions;

12. The method as recited in claim 11 wherein the modifying operations include at least one of truncation, ray tracing, altering the slope of the decay rate, windowing, smoothing, ramping, and full room swapping.
13. A system for modifying room or speaker characteristics for spatial audio rendering over headphones comprising:

segmenting the first BRIR into at least 2 regions;

using the processor to segment the first BRIR into regions that include a direct region, an early reflections region, a head and torso influenced region, and a late reverberation region;

identifying and removing the late reverberations and early reflections region; and

using ray tracing to synthesize the new reverberation corresponding to the non-room environment. 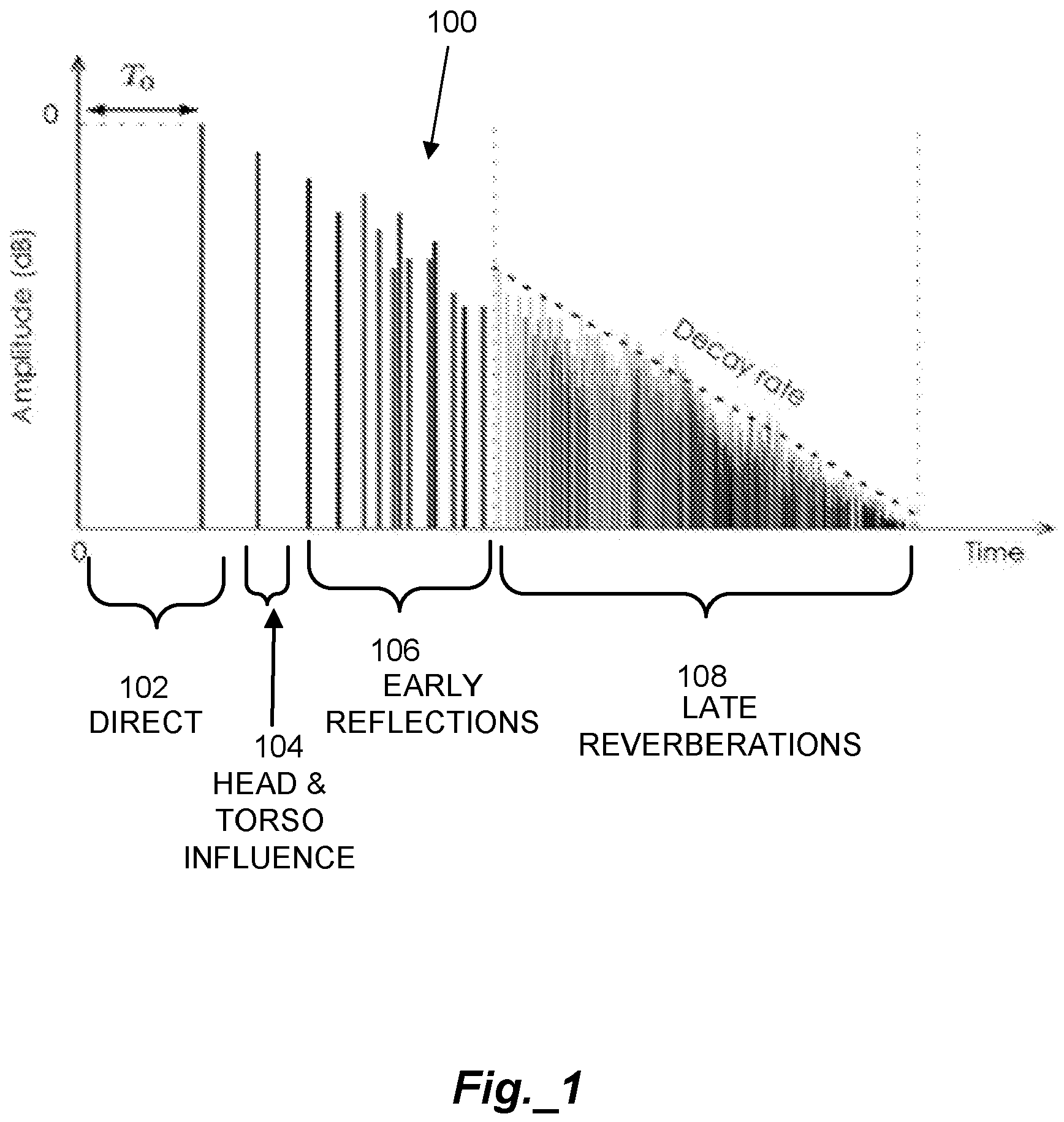 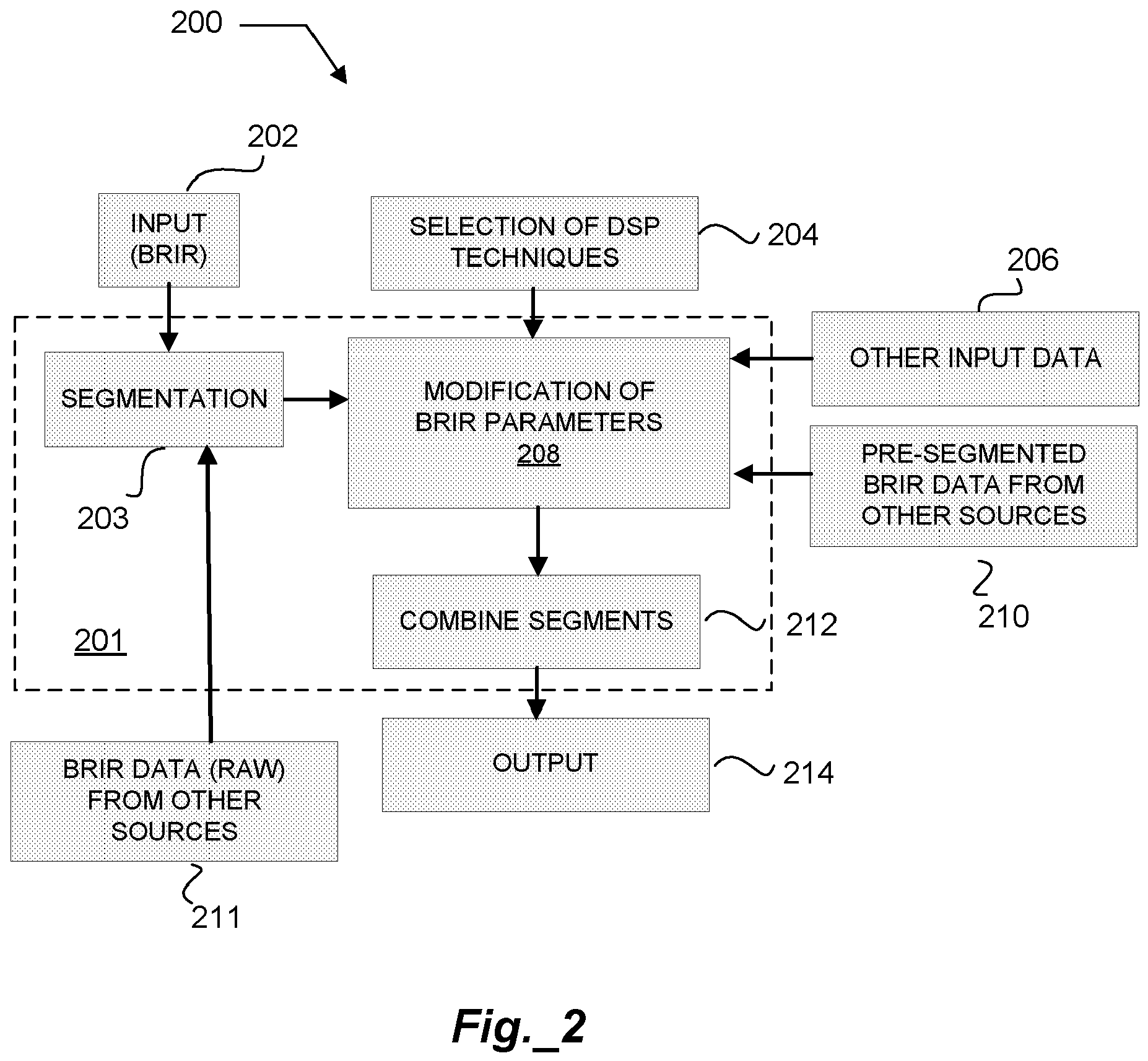 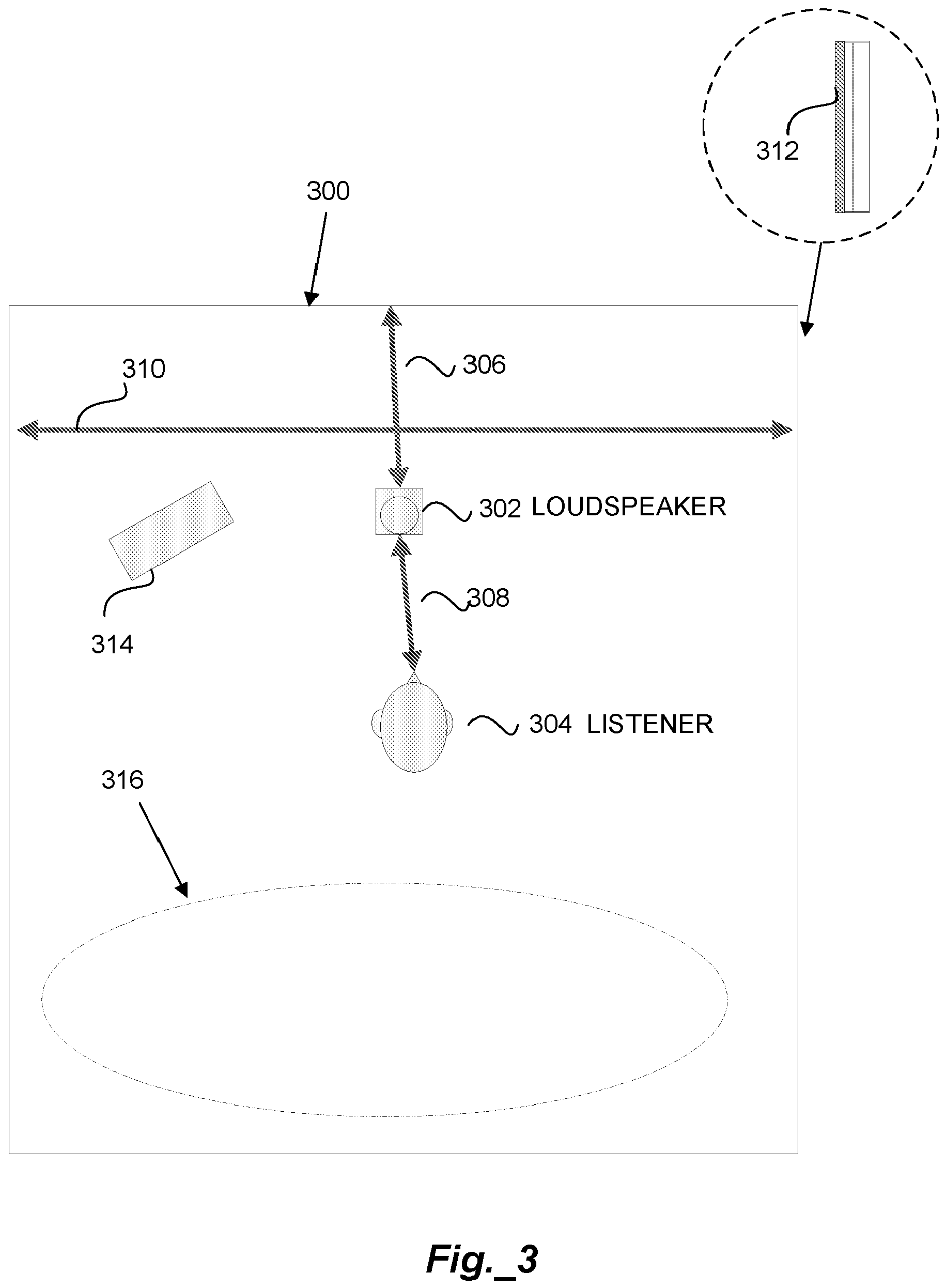 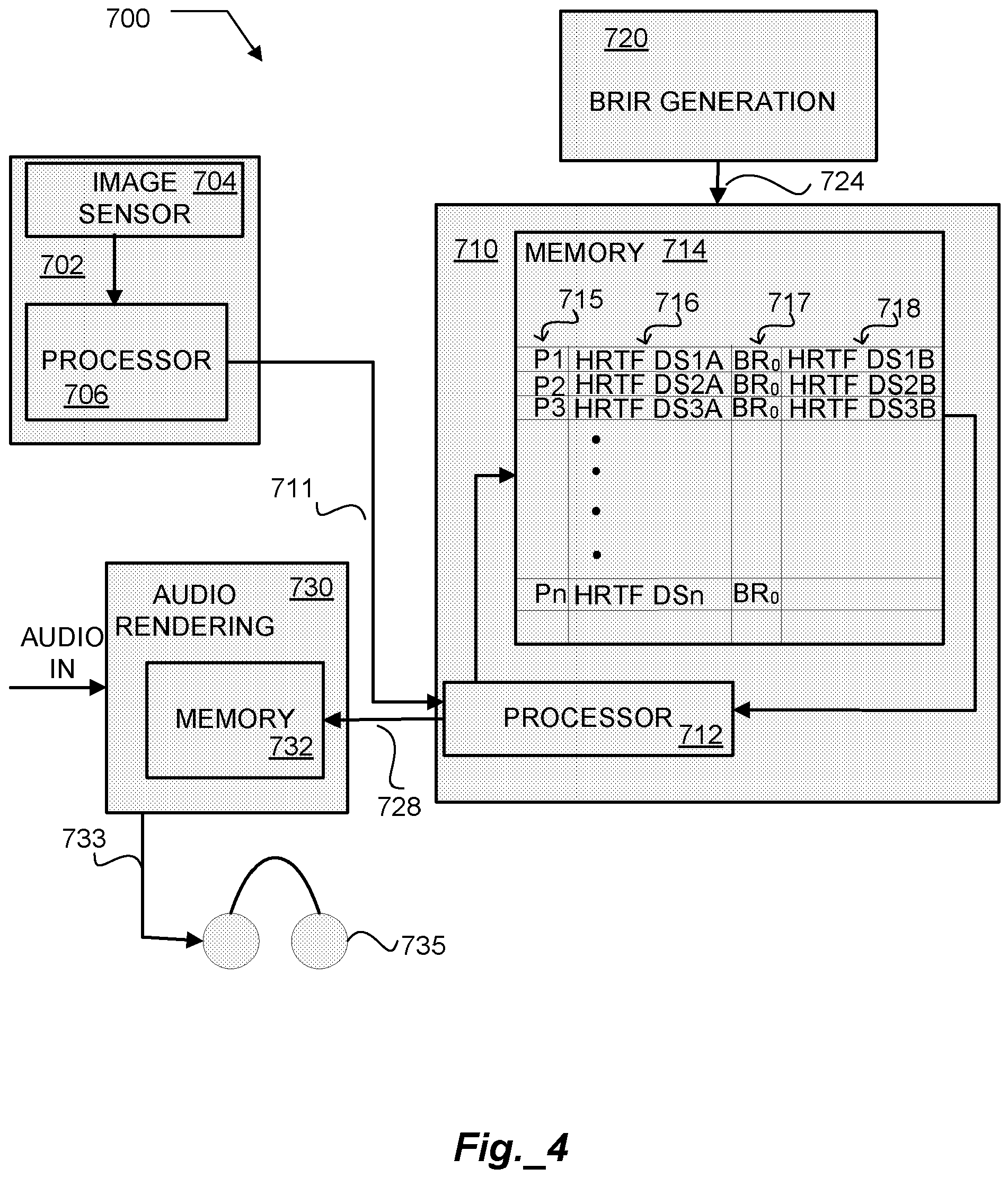 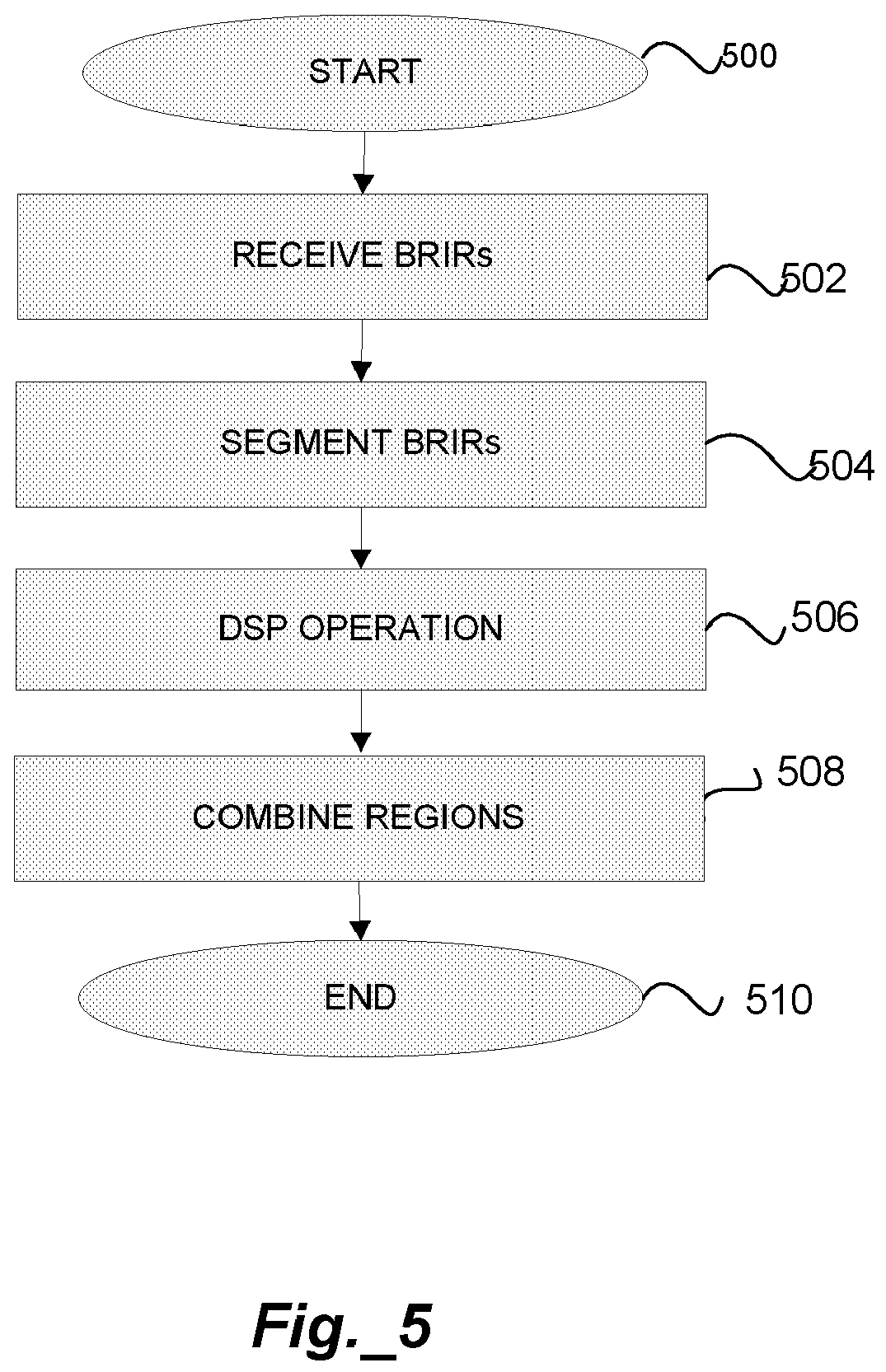 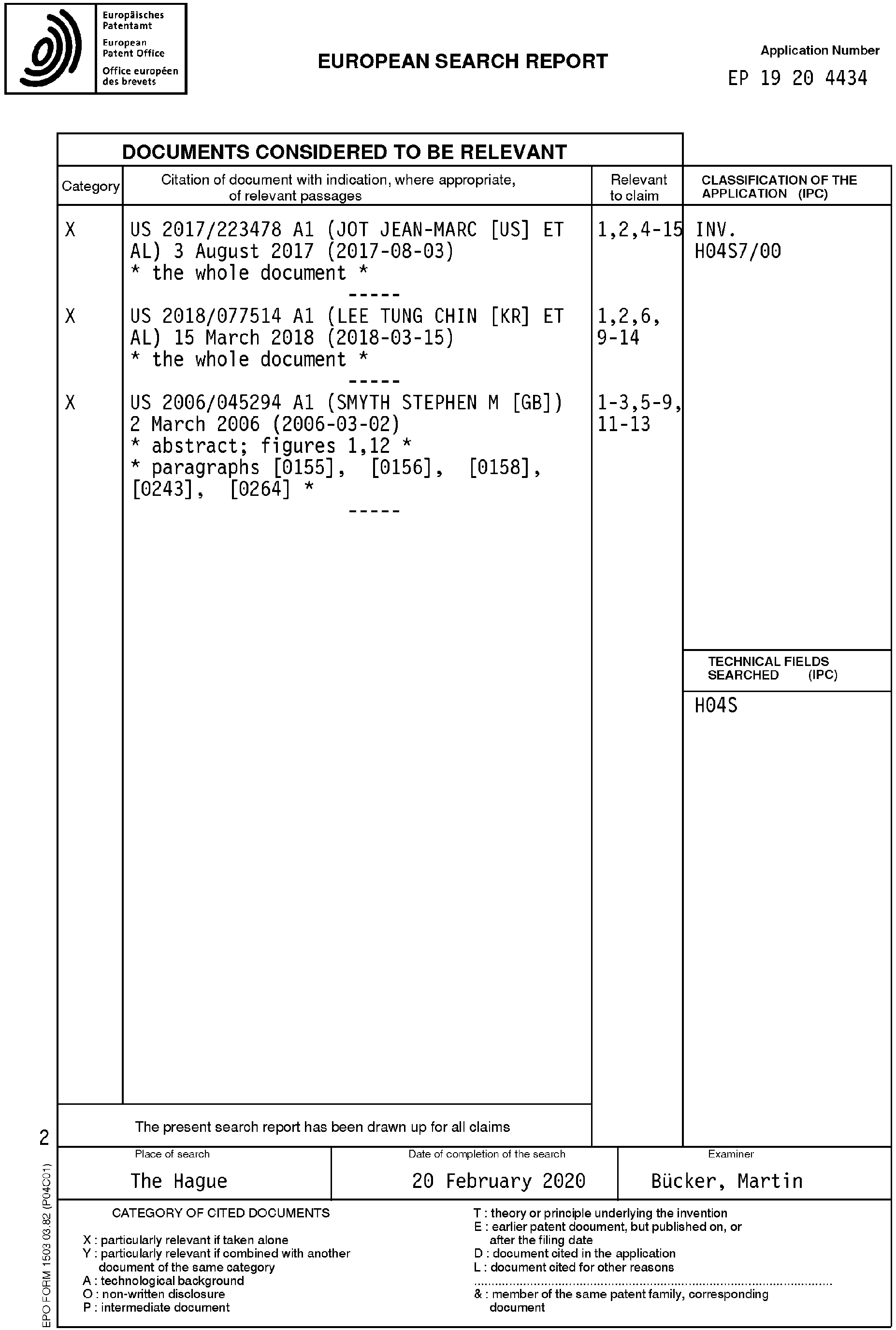 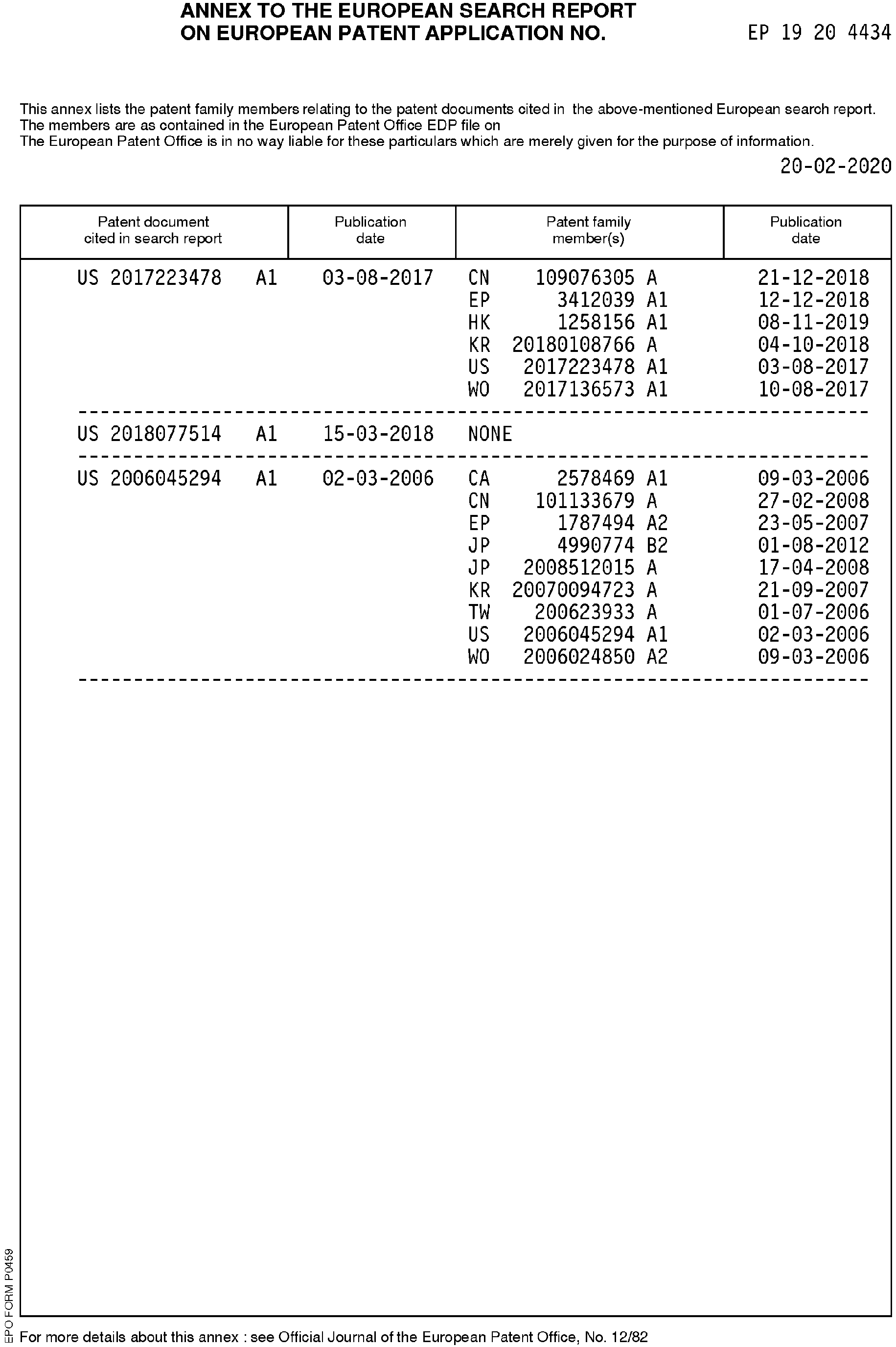