[0002] Supervisory control and data acquisition (SCADA) systems, or any type of industrial control systems (ICSs), are where computer controlled systems interact with real-world processes by monitoring and controlling the analog and digital input and output from devices, such as pumps, valves, heaters, etc. ICSs are at the center of today's technological infrastructures. ICSs are used to control and monitor from the most crucial processes, such as infrastructures for power generation, electrical transmission grids, water distribution, and transportation control, down to low scale ventilation, heating, and gas control in public or private facilities.
[0003] ICSs are comprised of programmable logic controllers (PLCs), SCADA data networks, operator and supervisor terminals, management terminals, etc. The PLC devices are connected to physical devices, such as pumps, meters, valves, heaters, etc. and control these physical devices using hardware interfaces, such as analog and/or digital input and/or output (I/O) electrical conductor lines, referred to herein as I/O lines. The PLCs frequently use a system bus design to attach I/O modules to the PLC processing unit, and the I/O modules contain electronics to control the output conductors and perform measurements on the input conductors. By manipulating the I/O lines in a certain order, the operation of the facility is implemented. The physical devices are operated by the PLC according to embedded logic, and each PLC is designed to work autonomously, often in groups where each PLC might control part of the process. Select information and statuses gathered by the PLCs are transferred to operator and/or supervisor terminals who have limited control of the operations according to predefined constraints, such as manual overrides of certain devices and/or operations when needed. Higher level information is transferred to management terminals for executive monitoring of the operations.
[0004] ICSs may be described as control systems where most of the logic is performed on the level of the PLCs, which have exclusive real world connection to the physical devices. The PLC's operational logic runs automatically in real time till the logic is changed, parameters are changed, or a manual override is sent from a control terminal. ICSs are designed to provide high reliability and environmental protection, and major efforts were done to reach high values of mean time between failures (MTBF). Hence the control systems were designed to be robust, autonomous, and easily overridden by the operator and/or programmer when needed.
[0005] Current security techniques for ICS include network level security using firewalls, internet packet diodes and high security level password protected gateways. These security techniques are designed to prevent unauthorized access through the internet.
[0006] Cyber security is the protection of computer systems from the theft or damage to their hardware, software or information, as well as from disruption or misdirection of the services they provide or the tasks they should perform. Cyber security includes controlling physical access to the hardware, as well as protecting against harm that might come via network access, data and code injection.
[0007] Cyber security is attained by the use of three main processes: prevention, detection and response.
[0008] Prevention systems attempt to detect a threat before any damage is done.
[0009] Detection systems attempt to detect any damage, disruption or misdirection and e.g., alert.
[0010] Reaction systems intended to react to threats upon detection.
[0011] Document XP055754331 relates to PLC Forensics Based on Control Program Logic Change Detection. A program called CPLCD runs on a PC. This program is configured with a set of detection rules (DRs) to be able to detect when the programming logic of a PLC has been altered by an unauthorized person. To define these rules, each ladder logic (i.e. the PLC's algorithm) is transformed into boolean expressions in order to determine an expected result based on the values of a set of variables in the memory (i.e. based on a specific input). The CPLCD then reads the actual values of these variables from the memory of the PLC and calculates the expected result based on the DRs. If the actual result in the PLC is different from the expected result, it means that the programming logic of the PLC has been altered.
[0012] Document EP3179323 discloses systems and methods of detecting whether an attacker has re-programmed a Programmable Logic Controller (PLC) in a Supervisory Control And Data Acquisition (SCADA) system in order to send false information back to the Human Machine Interface (HMI).
[0013] Document KR101252358B discloses a PLC command test device and method to reduce costs and time for testing a PLC command by automatically testing a PLC command error

[0016] For better understanding of the invention and to show how the same may be carried into effect, reference will now be made, purely by way of example, to the accompanying drawings.
[0017] With specific reference now to the drawings in detail, it is stressed that the particulars shown are by way of example and for purposes of illustrative discussion of the preferred embodiments of the present invention only, and are presented in the cause of providing what is believed to be the most useful and readily understood description of the principles and conceptual aspects of the invention. In this regard, no attempt is made to show structural details of the invention in more detail than is necessary for a fundamental understanding of the invention, the description taken with the drawings making apparent to those skilled in the art how the several forms of the invention may be embodied in practice. In the accompanying drawings:

Fig. 1 is a schematic view of an exemplary existing industrial control system;

Fig. 2 is a schematic view of the system of Fig. 1 with the Deterministic Fictitious PLC (DFPLC) and the monitoring unit according to embodiments of the present invention; and

Fig. 3 is a flowchart showing the process performed by the DFPLC and the monitoring unit according to embodiments of the invention.

at least one physical device connected with said PLC;

a Deterministic Fictitious Programmable Logic Controller, DFPLC (200), comprising a deterministic program logic; said DFPLC deterministically programmed and configured to receive at least one input signal and respond with at least one predetermined signal according to said logic; and

communicate at least one alert upon said at least one response being other than an expected response according to said deterministic programming of said DFPLC (200).

an information technology, IT, layer (120) connected to the internet;

a DeMilitarized Zone, DMZ, layer (130) connected with said IT layer; and

3. A method of detecting threats in industrial systems, comprising:

and providing, by said monitoring unit (210), at least one alert upon said at least one response being other than an expected response according to said deterministic programming of said DFPLC (200). 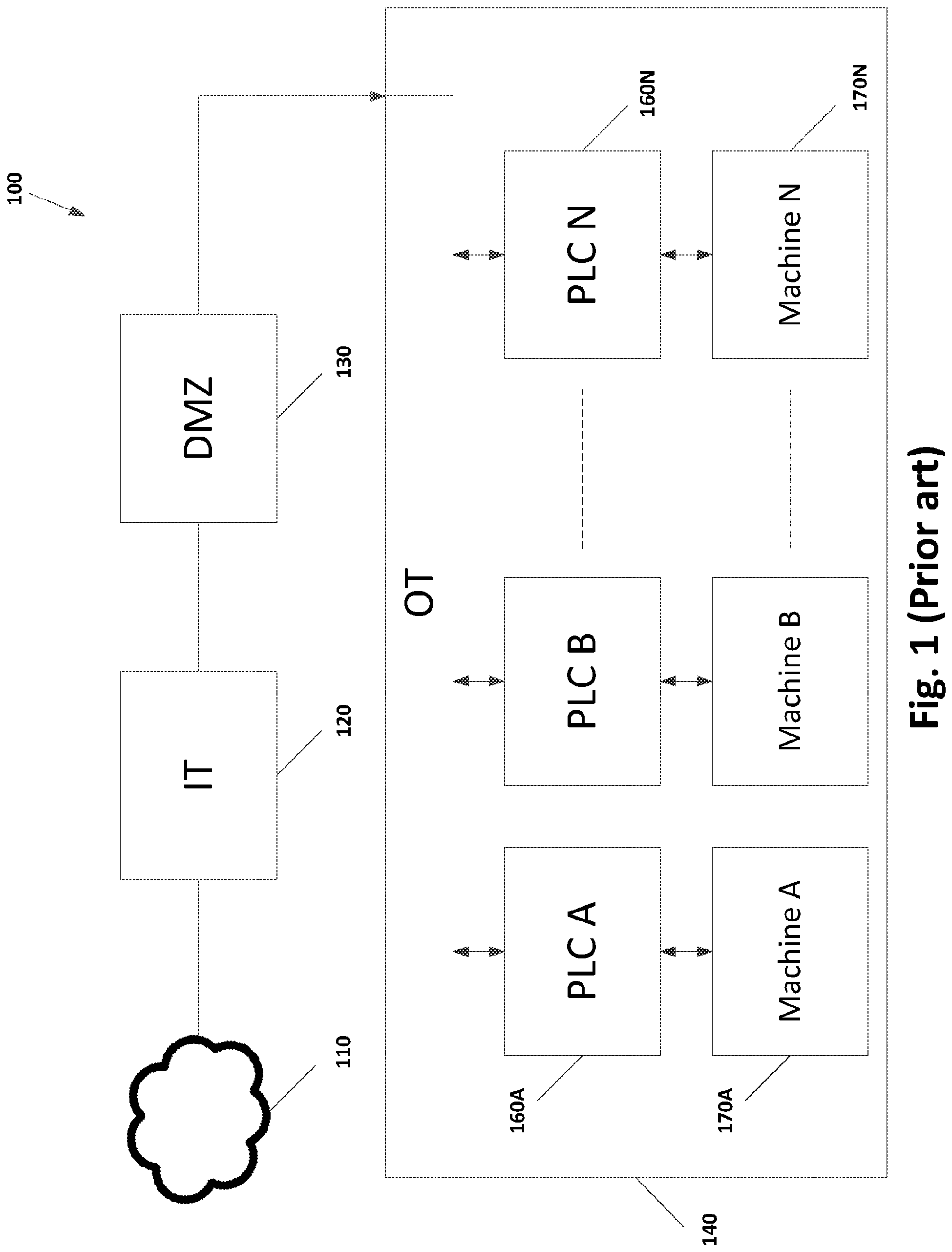 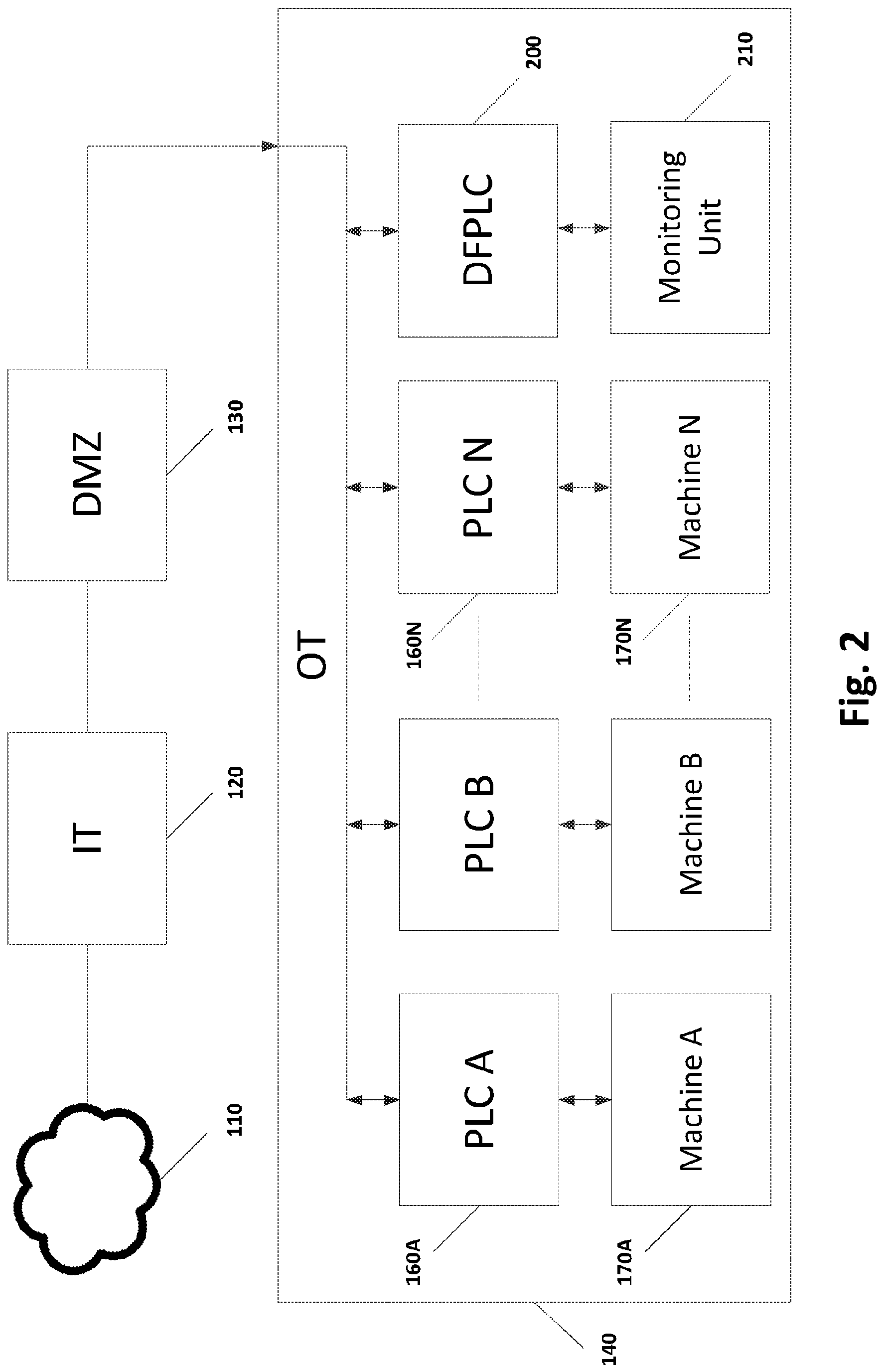 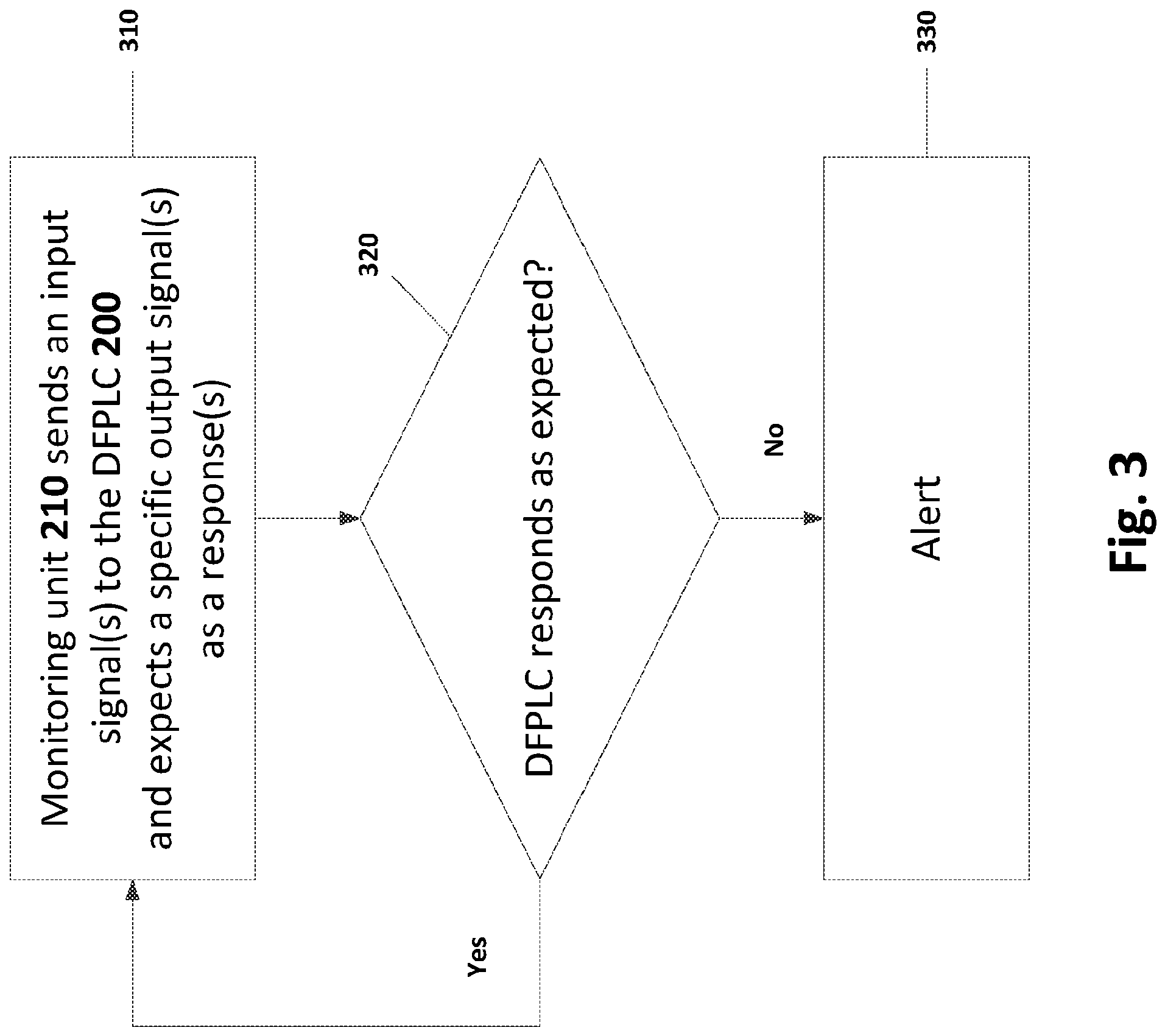