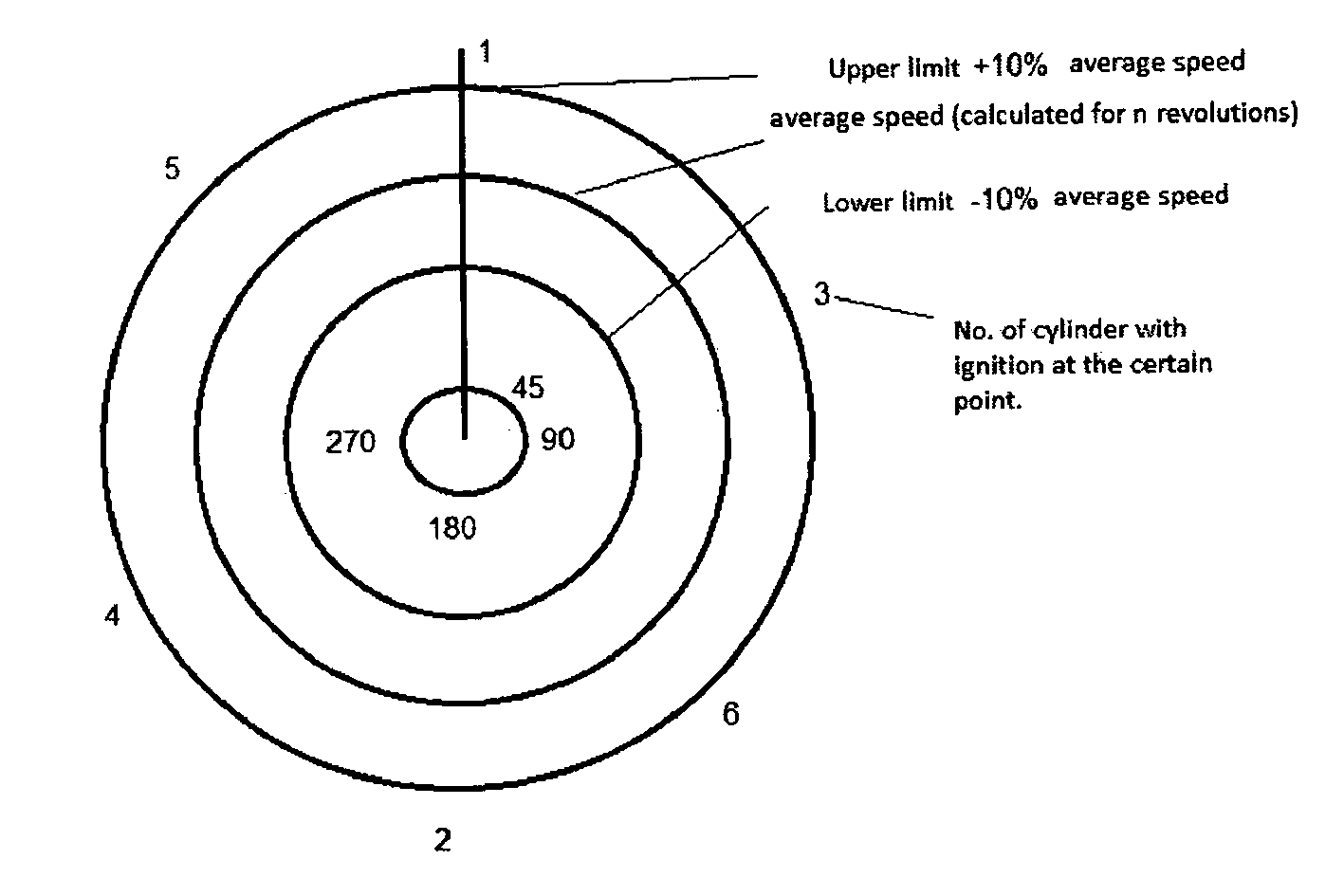 [0007] For a properly functioning engine, the speed variation recorded under the specified operating conditions shall lie within the limits set by the lower and upper limits, as shown in the following example. 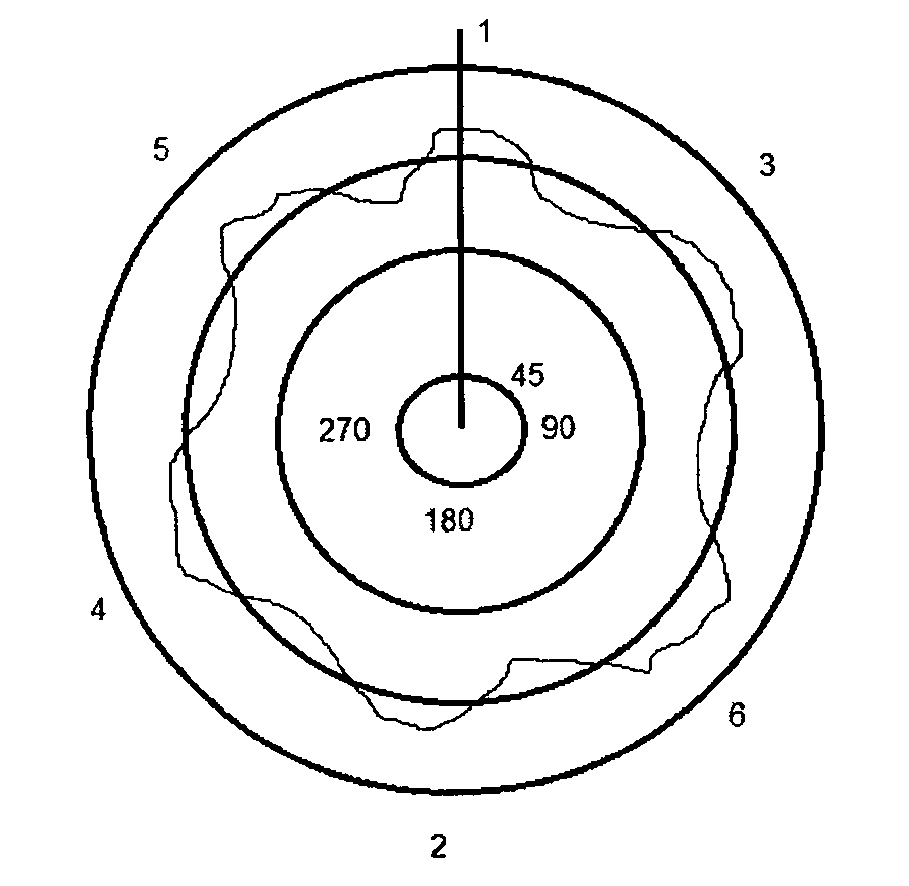 [0008] If there is no combustion in one of the cylinders, the value of the lower speed limit will be exceeded. The following example illustrates the absence of combustion in cylinder No 5. 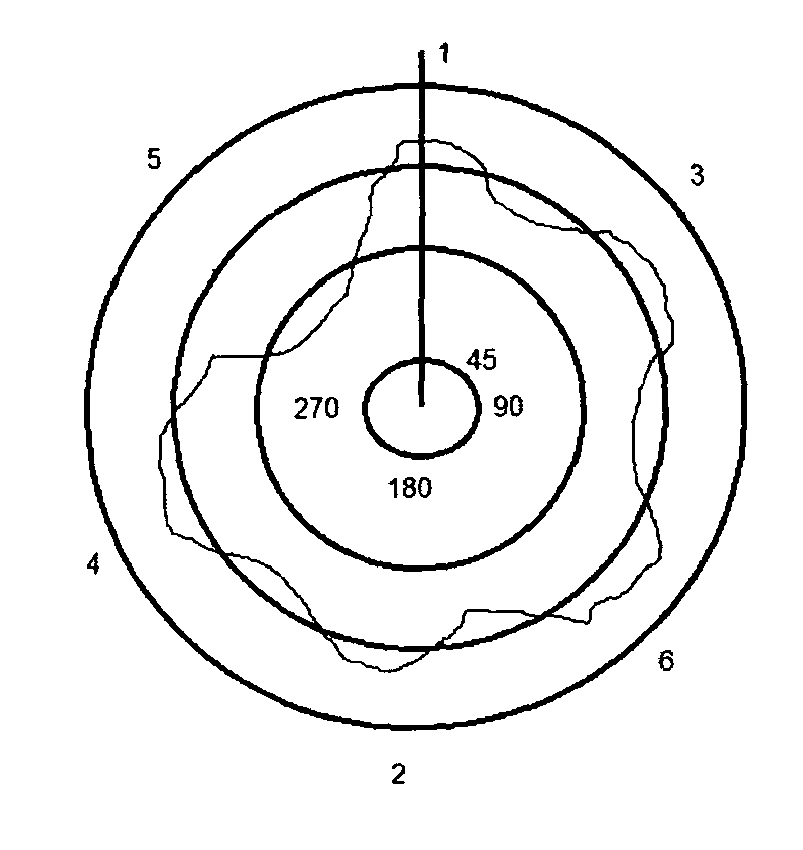 [0009] In case of burning more than the assumed fuel quantity, e.g., due to improper static control of the injection pump, the exceeding of the value of the upper deviation will be recorded during the measurement. This is illustrated below by the example of cylinder No. 6 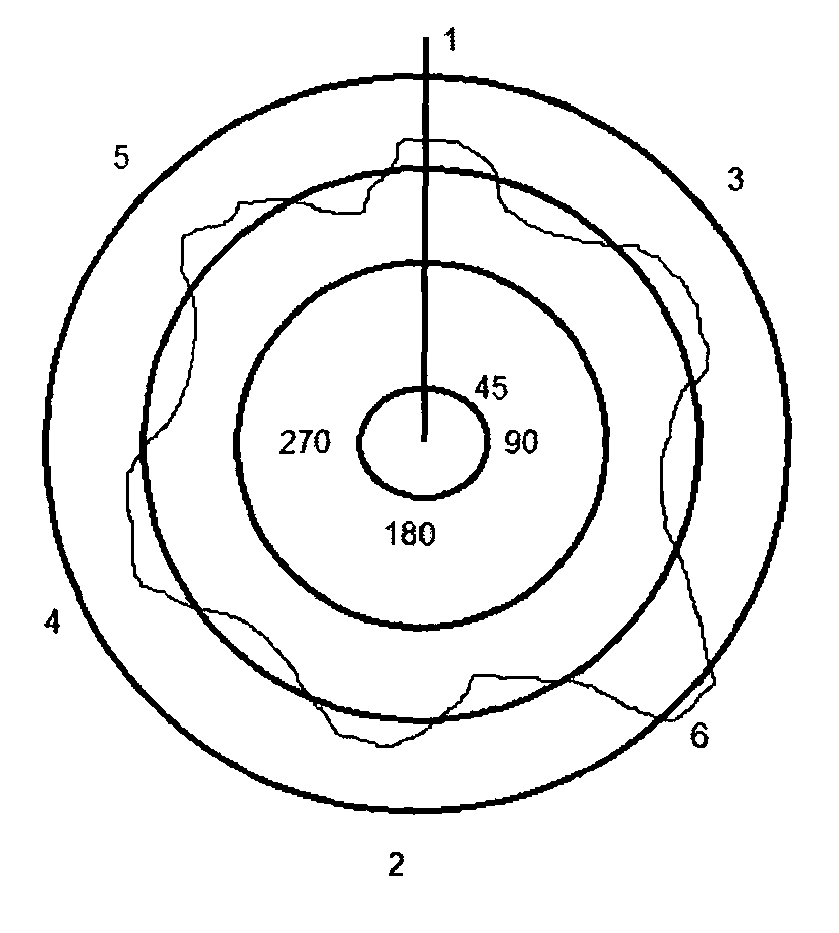 [0010] An alternative visualization using an orthogonal layout appears as:
[0011] The designations on the figures denote the following in sequence: 1 - Diagnosed engine; 2 - Crankshaft angle encoder; 3 - Clock; 4 - Signal processing module which defines the instantaneous engine speeds and builds a measuring array; 5 - Input interface responsible for entering data on the number of averaging cycles n; engine type: two-stroke, four-stroke; the number of cylinders and their ignition sequence; 6 - engine condition visualizer responsible for comparing measured values with the mean value and deviations +/- X% of the mean speed and correlating measurements with angular positions at which ignition occurs on individual engine cylinders.

1. The method for assessing the mechanical load of power machinery, especially internal combustion piston engines, is based on monitoring the rotational speed by a device placed at the free end or on the shaft line to measure the angular position of the drive shaft. Then, by measuring the time of the momentary change in the position of the shaft, the speed of rotation at the appropriate moments (from 0.10 - 20) over each work cycle i is determined. A comparison shall be made of the deviation of the calculated speeds from the average speed of the complete unit determined over n consecutive work cycles, and the calculated value of the angular velocity deviation is compared to the permitted absolute deviation from the calculated mean value. The permitted lower and upper deviations are calculated as follows: +/-X[rpm] = (0.5 x SNBM [-] x 100% + A[%]) x (average speed [rpm]), where SNBM is the degree of irregularity of the machine run, and A is an empirical correction factor within the range <-10%,10%>
2. The method according to disclaimer 1 is significant in that the shaft position sensor is located on the shaft line of the machine.
3. The method according to disclaimer 1 or 2 is significant in that the calculation of the momentary shaft speeds every half degree of angular shaft rotation is carried out simultaneously at two shaft ends, i.e. at the free end of the shaft and at the shaft line. 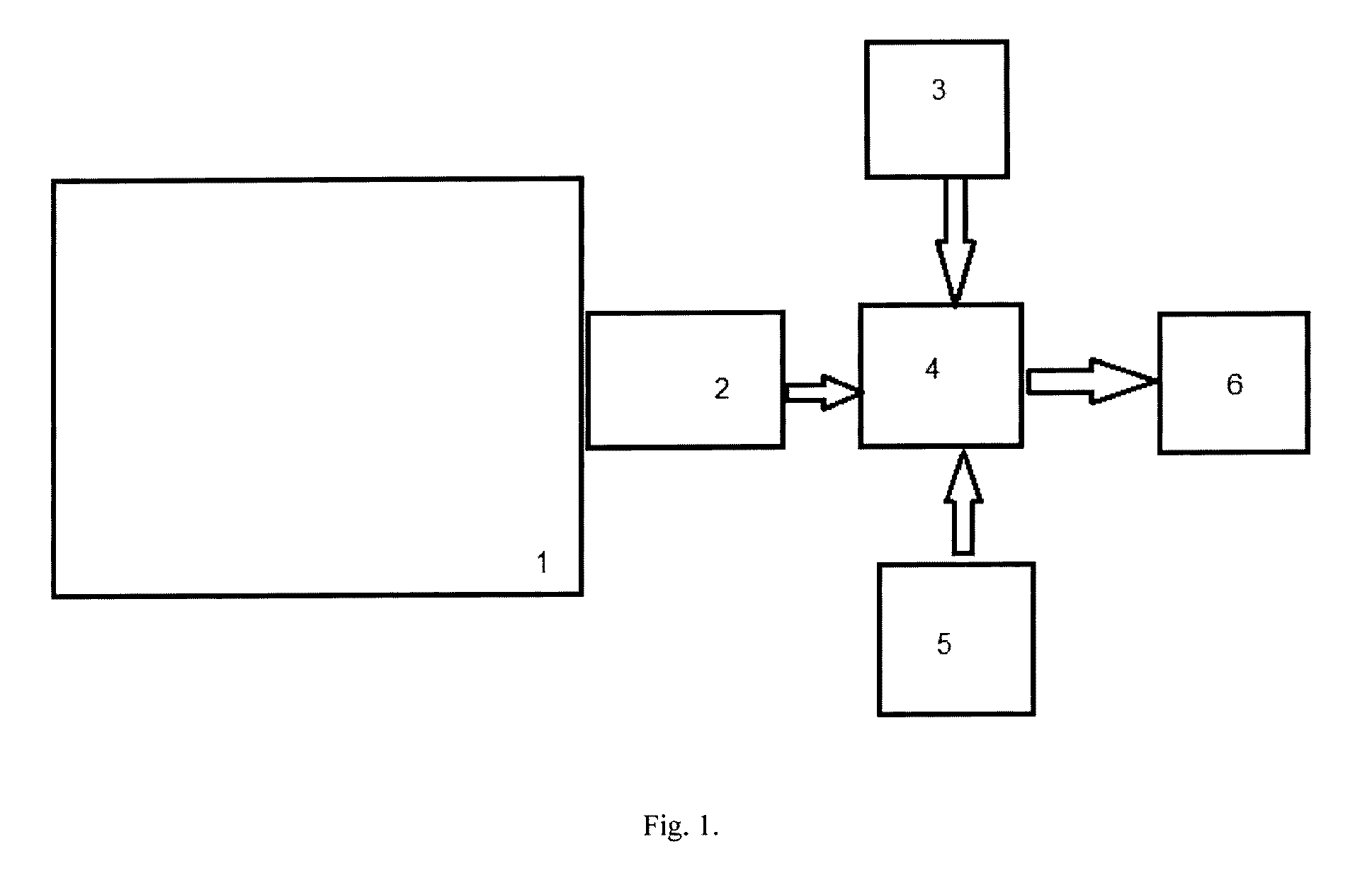 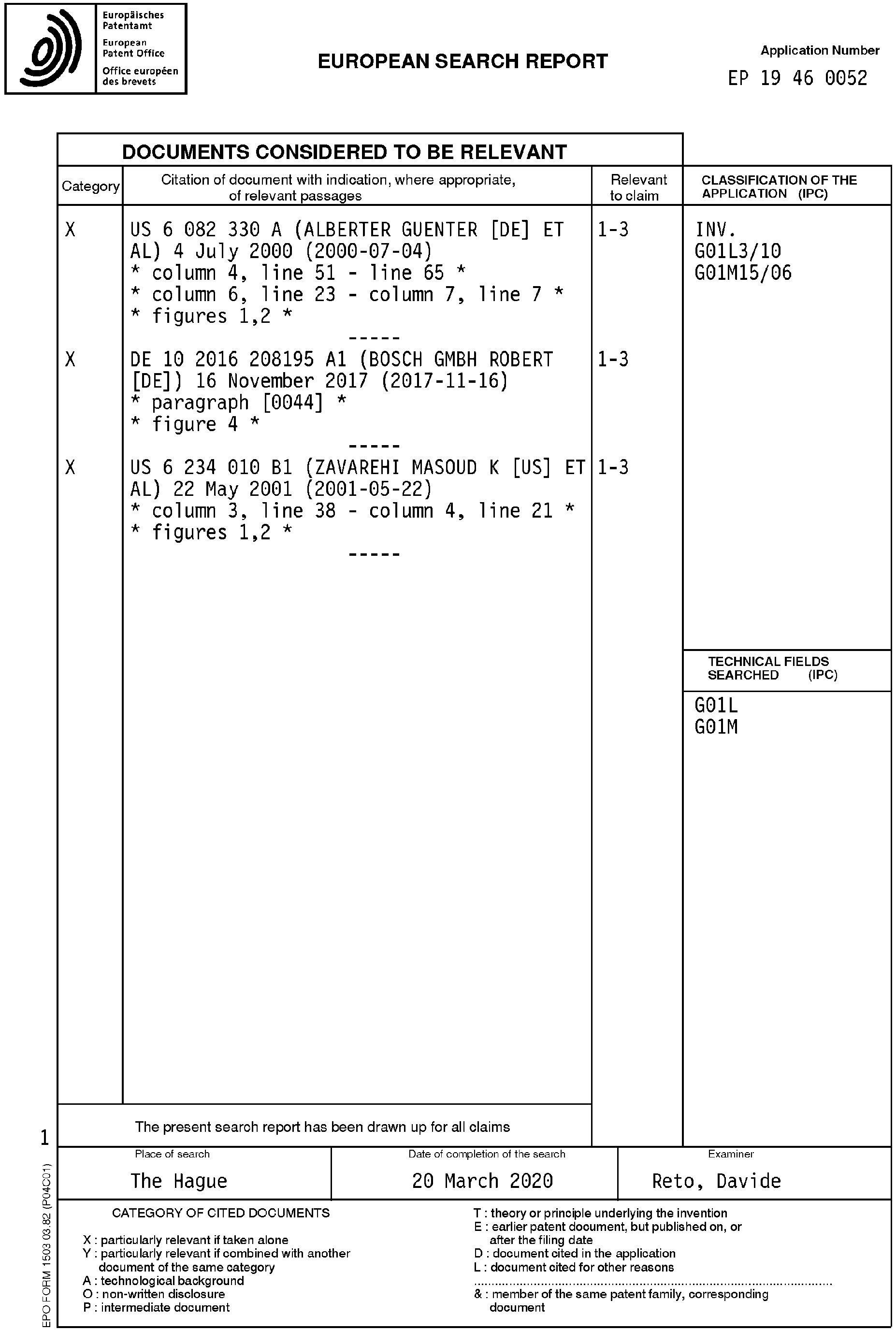 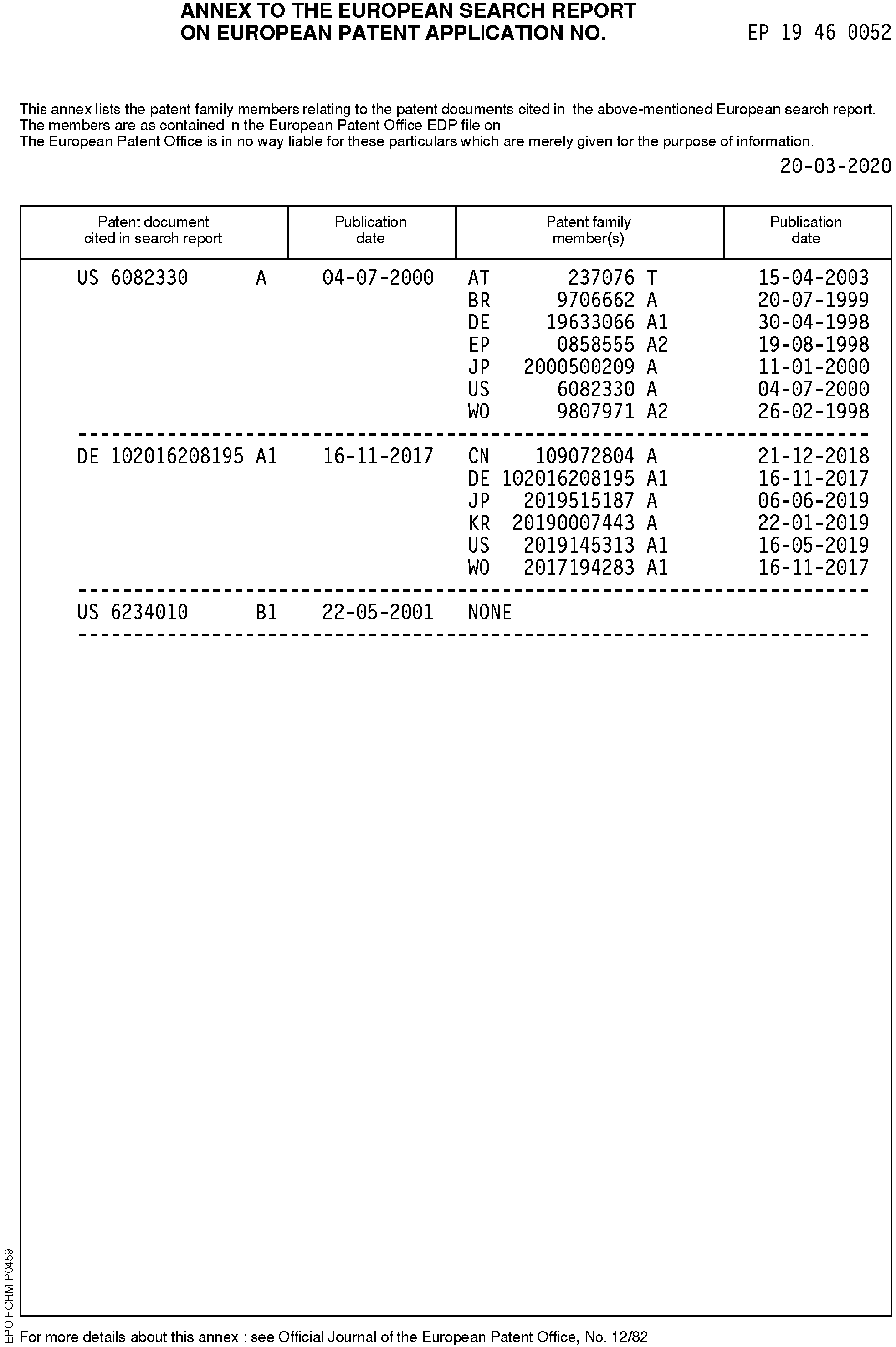