Background and Prior Art

[0002] Performance garments are garments that are configured so that a wearer may comfortably perform a range of exercises in the garment. Performance garments are also sometimes referred to as sportswear, activewear, or athletic wear. More recently, due to the popularity of wearing performance garments as casual wear in addition to during exercise, some performance garments have also begun to be referred to as athleisure garments. To render them particularly suitable for a range of exercise, performance garments are usually made of synthetic fabrics such as polyester, which excels at moisture wicking and helps to pull moisture away from the skin to keep the wearer dry and comfortable.
[0003] Unfortunately, malodours tend to impregnate synthetic fabrics such as polyester, and may persist and develop even after laundering. Studies have found that not only does polyester smell far worse than cotton following intensive exercise, its fibres may act as a better substrate for growth of malodorous bacteria such as Staphylococcus and especially Micrococcus species (in particular M.luteus).
[0004] Furthermore, many of the specialist fabrics used in performance garments require a tailored care regime to maintain good condition, with many manufacturers recommending low temperature washing (40°C or less), air or cool tumble drying, and avoidance of high detergent levels, oxidizing bleaches, harsh biocides and fabric softeners.
[0005] As such, there is a need in the art for effective solutions to the problem of malodour on fabrics used in performance garments, without resorting to aggressive washing or drying regimes which may damage or degrade the integrity or performance of such fabrics.
[0006] The present inventors have determined that certain soil release polymers (SRPs) have utility in the reduction of malodour from synthetic fabrics such as polyester.

from 3 to 80% (by weight based on the total weight of the composition) of one or more detersive surfactants, and

a nonionic soil release polymer (SRP) being a copolymer of at least alkylene glycol and aromatic dicarboxylic acid monomer units;

for the reduction of malodour on synthetic fabrics laundered therewith.

[0009] The term "anti-malodour active" in the context of this invention denotes an active which can reduce malodour on synthetic fabrics. Such actives may reduce the concentration of malodorous compounds in the air and/or reduce the perception of malodour to the human nose as measured by either chemical analysis or sensory methods.
[0010] SRPs for use in the invention may include a variety of nonionic monomer units and structures may be linear, branched or star-shaped. The SRP structure may also include capping groups (typically C1-4 alkyl such as methyl) to control molecular weight. The weight average molecular weight (Mw) of the SRP may suitably range from about 1000 to about 20,000 and preferably ranges from about 1500 to about 10,000.
[0011] Nonionic SRPs for use in the invention may suitably be selected from copolyesters of aromatic dicarboxylic acids (for example furandicarboxylic acid, phthalic acid or terephthalic acid), alkylene glycol (for example ethylene glycol or propylene glycol) and polydiols (for example polyethylene glycol or polypropylene glycol). Examples of such materials include oligomeric esters produced by transesterification/oligomerization of poly(ethyleneglycol) methyl ether, dimethyl terephthalate ("DMT"), propylene glycol ("PG") and poly(ethyleneglycol) ("PEG"); nonionic-capped block polyester oligomeric compounds such as those produced from DMT, Me-capped PEG and EG and/or PG, and copolymeric blocks of ethylene terephthalate or propylene terephthalate with polyethylene oxide or polypropylene oxide terephthalate.
[0012] Preferred nonionic SRPs for use in the invention include copolyesters formed by condensation of terephthalic acid ester and diol, preferably 1,2 propanediol, and further comprising an end cap formed from repeat units of alkylene oxide capped with an alkyl group. Examples of such materials have a structure corresponding to general formula (I):

in which X is C1-4 alkyl and preferably methyl;

[0065] Expert odour assessors trained to quantify body odour (following a methodology described in WO99/19452) were employed to assess malodour intensity at consumer important moments in the wash-wear cycle.
[0066] A panel of 32 women was divided into four groups of eight. Each was given a cotton T-shirt modified to accommodate knitted polyester swatches in the underarm region of the shirt. These swatches are 14 cm x 18cm and made from 100% knitted polyester (Phoenix Calico - polyester cross-tuck 144g/m2). Prior to first wear all the swatches are laundered in an unfragranced, bleach-containing detergent powder (SKIP™) at recommended dose (120gms) in a Zanussi™ front loading automatic washing machine at 60°C. None of the swatches are pre-washed in the products under evaluation. Each panellist has four swatches assigned to them. These are worn in rotation as pre-assigned.
[0067] On any day, each panellist would wear two swatches; that in the left armpit having been washed in one product whilst that in the right armpit was washed in a separate product. Swatches were rotated in such a way that all panellists are exposed to swatches washed in all four products. In the current study, the process was continued out to four cycles. Laundered swatches were given to the panellists at a set time on the morning of each day of the test; they then wear them throughout the day and return the soiled swatches the following morning when they are reissued with a clean T-shirt and second pair of swatches.
[0068] The fragrance-free liquid detergent formulations given in Table 1(a) were evaluated at recommended dose (35ml) in a Zanussi™ front loading automatic washing machine at 40°C, on a synthetics wash cycle in 26°FH water by washing the appropriately coded soil swatches in the corresponding formulation.
[0069] Each wash load also comprised 1 kg of clean 100% cotton and 1kg of 100% polyester together with 3 sheets of an industry recognised simulated soil-ballast (SBL-2004 ex. Krefeld test institute). The swatches were tumbled dried on cool setting following laundering and then assessed approximately 2 hours after drying.
[0070] Malodour intensity assessments were made on each of the soiled swatches and then again following washing and drying of swatches in the test products. Following the laundering, drying and odour assessment after the 4th cycle the swatches were stored (wrapped in aluminium foil) for 7 days prior to reassessment of any malodour that may have developed on storage. Results are given in Table 1(b).
[0071] The effect of the SRP on fragrance delivery for the four formulations is shown in Table 1(c). These results were obtained using a commercial sample of SURF™, "Small and Mighty with essential oils", "Tropical" variant.
Table 1(a)
Table 1(b)
Table 1(c)

[0072] These results show that the examples of the invention (1 and 2) show improved performance over the comparative examples (A and B). In the comparative examples using no SRP or anionic (sulfonated) SRP, over 60% of panellist swatches developed malodour during storage. In the examples of the invention, fewer developed malodour on storage.
[0073] Table 1(c) shows that while any SRP reduces the intensity of perfume, the effect on perfume is comparable for the sulfonated and nonionic SRP whereas their performance as regards malodour development is different.

[0074] This test used the methodology of Example 1, except that a build-up in malodour on the polyester was encouraged by simply washing all the swatches in water-only during cycles 1 and 2. This simulates both soil build up during repeated wash-wear and creates an increase in malodour levels similar to that which would be achieved by boosting the panel with a disproportionate number of individuals more prone to intense BO. The panellists then wore the swatches for a third occasion and following collection they were stored for two days to simulate clothes being left in a laundry basket. Following this storage period, the soiled swatches were assessed by the expert odour assessors and then laundered in the test products as described in example 1.
[0075] In this study, the polyester used was Coolmax ™ a rapid-wicking textile frequently used in sportswear.
[0076] The fragrance-free liquid detergent formulations given in Table 2 (a) were evaluated at recommended dose (35ml) in a Zanussi ™ front loading automatic (FLA) washing machines at 40°C, on a synthetics wash cycle in 26°FH water by washing the appropriately coded soil swatches in the corresponding formulation. Each wash load also comprised 1 kg of clean 100% cotton and 1kg of 100% polyester together with 3 sheets of an industry recognised simulated soil-ballast (SBL-2004 ex. Krefeld test institute). The swatches were tumbled dried on cool setting following laundering and then assessed approximately 2 hours after drying.
Table 2(a)

[0077] These results in Table 2 (b) show that the examples of the invention (3 and 4) show improved performance over the comparative examples (C and D), even at relatively low surfactant levels.
Table 2(b)

2. The use of a laundry detergent composition comprising:

from 3 to 80% (by weight based on the total weight of the composition) of one or more detersive surfactants, and

a nonionic soil release polymer (SRP) being a copolymer of at least alkylene glycol and aromatic dicarboxylic acid monomer units;

for the reduction of malodour on synthetic fabrics laundered therewith.

3. Use according to claim 1 or 2 in which the alkylene glycol is selected from ethylene glycol and propylene glycol or a mixture thereof.

4. Use according to any one of claims 1 to 3 in which the aromatic dicarboxylic acid is terephthalate.

5. Use according to any one of claims 1 to 4, in which fabric malodour developing after a storage period is reduced.

6. Use according to claim 5, in which the storage period ranges from 24 hours to 8 days. 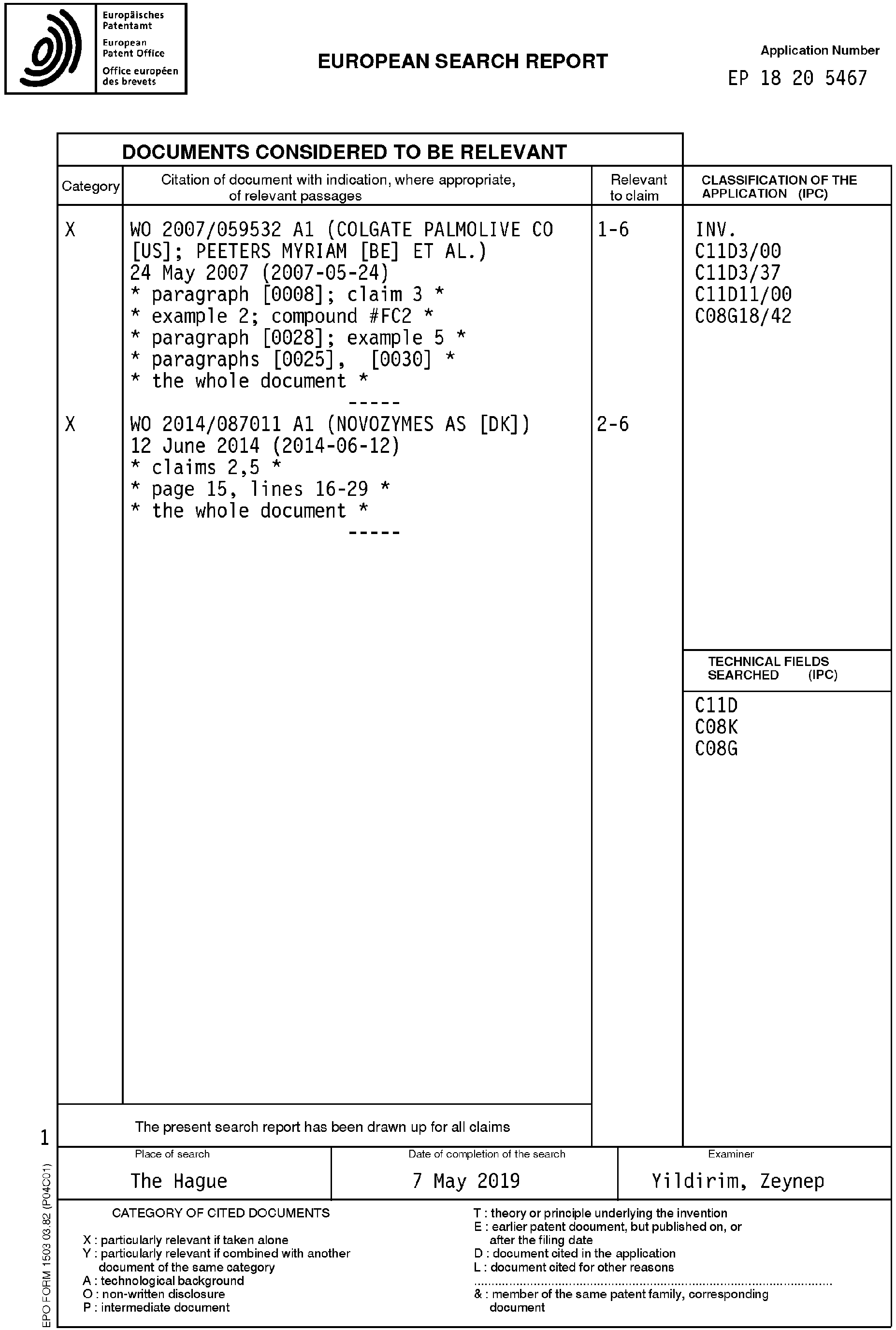 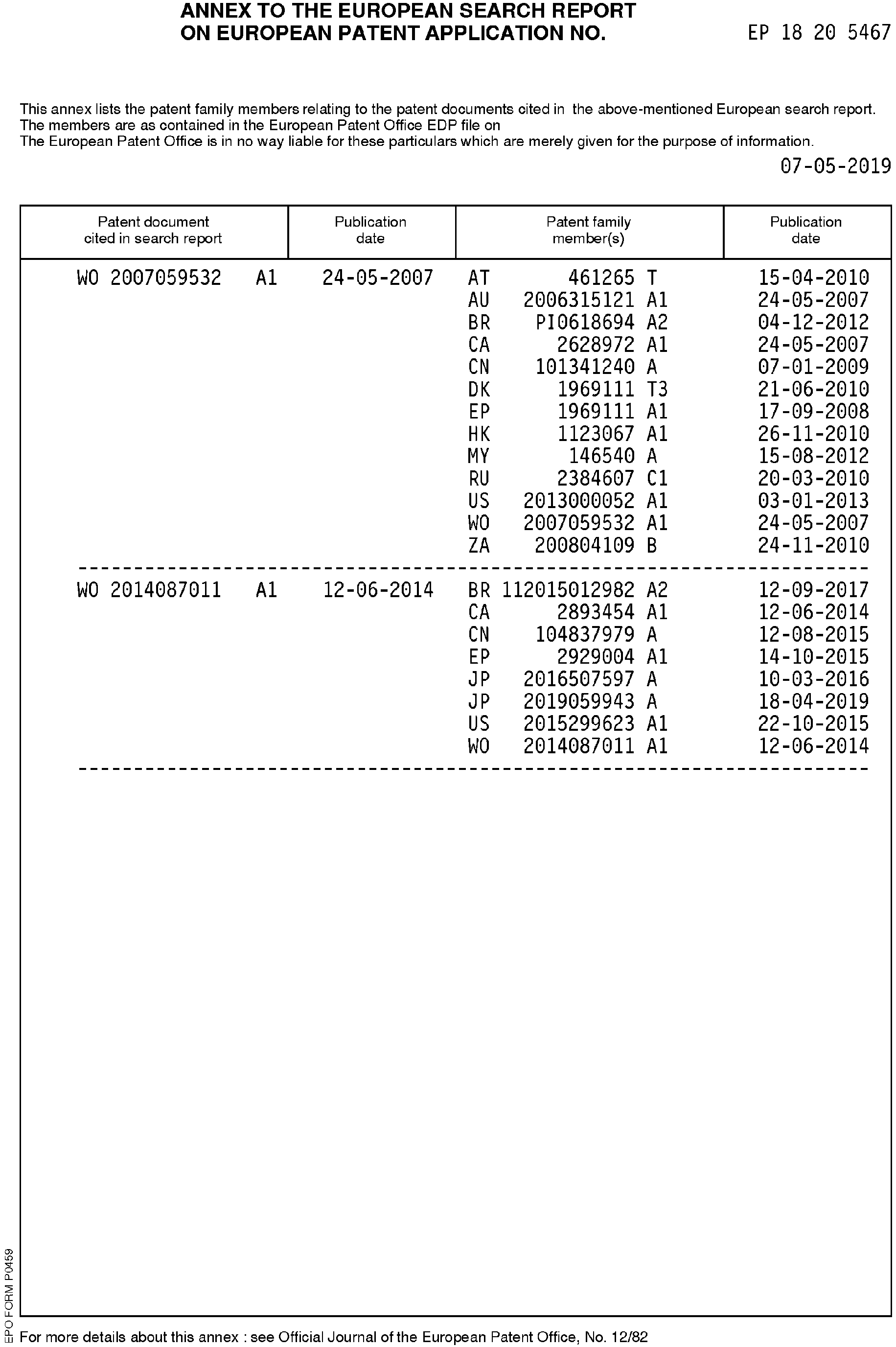