[0001] The invention relates to the field of robotics and more specifically to a method and system for generating and updating a user interface for displaying robots furnished with different components dynamically.

[0002] A quite extended definition of robot is that of actuated mechanism programmable in two or more axes with a degree of autonomy, moving within its environment, to perform intended tasks. Additionally, a note that may be incorporated in said definition is that a robot includes the control system and the interface of the control system.
[0003] Programmable robots need to be configured and this setup may be done through the user interface. In addition, robots move according to the programmed paths, thereby the addition of new code is totally conditioned by the user interface's friendliness and by how easily can the user type new orders. Additional options such as user management, safety configuration and many others may be also controlled through the user interface.
[0004] Traditional ways of setting up and programming robots included an interface called CLI (Command Line Interface). While its use was not user friendly at all, it could be said that the use of such technology was mainly oriented to experts in the field. Later on, CLIs switched to GUIs (Graphical User Interfaces) where users interact with information by manipulating visual widgets that allow for interactions appropriate to the kind of data they hold. The widgets of a well-designed interface are specifically selected to support the actions necessary to achieve the goals of users.
[0005] Thus, an end-user would be setting up and programming the robot through the UI, what means that, in the field of robots composed by different autonomous parts or components (sometimes called modular robots), the constant evolution of devices and the frequent come and go of the parts of the robot, would end in a need of constant development of new adapted Uls.
[0006] Therefore, there is a need to reduce the time of the UI development, design and implementation, and to automate the process before the system even reaches the end-user.

[0007] The present invention relates to a method and system for generating and updating a user interface (UI) by using the information retrieved from a set of identified robot components. Embodiments of the present invention may consider the employment of exemplary information models so that the retrieval of robot components' information structured under said information models allows for a dynamic construction of the system to be displayed through a preferred UI.
[0008] More concretely, the present invention consists, on the one hand, of a method, as schematically represented in the accompanying figures, that may comprise a plurality of steps executed by one or more processors under a series of computer instructions causing operations aimed at generating and updating a UI that represents the current state of the operating robot components.
[0009] On the other hand, a system furnished for the implementation of the present invention is also provided, said system comprising a robot with at least 1 degree of freedom (DoF), a robot control device or control system (i.e. a robot controller, a PC or any other device capable of controlling the robot) and a touch panel or other device used as a teach pendant where the user interface may be displayed.

[0010] To complement the description that is being made and to aid towards a better understanding of the characteristics of the invention, in accordance with a preferred example of practical embodiment thereof, a set of drawings is attached as an integral part of said description wherein, with illustrative and non-limiting character, the following has been represented:

Figure 1 shows an exemplary robot made up with different working robot components.

Figure 2 shows an exemplary system furnished for the implementation of the present invention.

Figure 3 is a flowchart of the different steps comprised in the disclosed method.

Figure 4 is a representation of an exemplary user interface (UI) comprising different areas according to the information to be shown.

Figure 5 shows a robot manipulator operated in eight joints (two per part) that provide the robot with 8DoF.

Figure 6 is a screenshot of a menu where the kinematics added to the UI are represented, whereby the joint name as well as buttons and sliders for controlling the joints of the robot are comprised.

Figure 7 is a flowchart of the daisy chain topology of 6 components making up a robotic system.

Figure 8 is a schema of an information model (i.e. Hardware Robot Information Model) and the information accessed through said model. 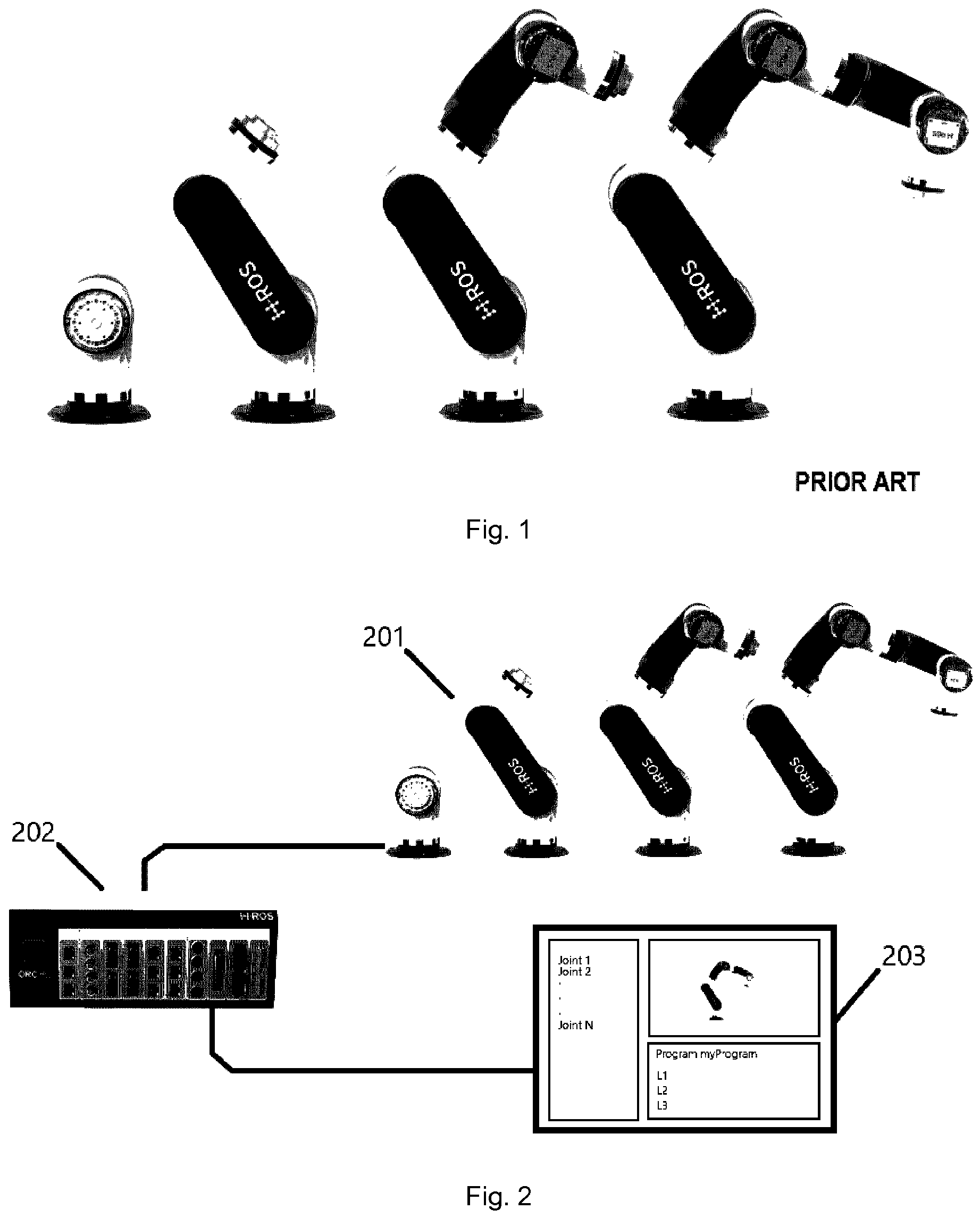 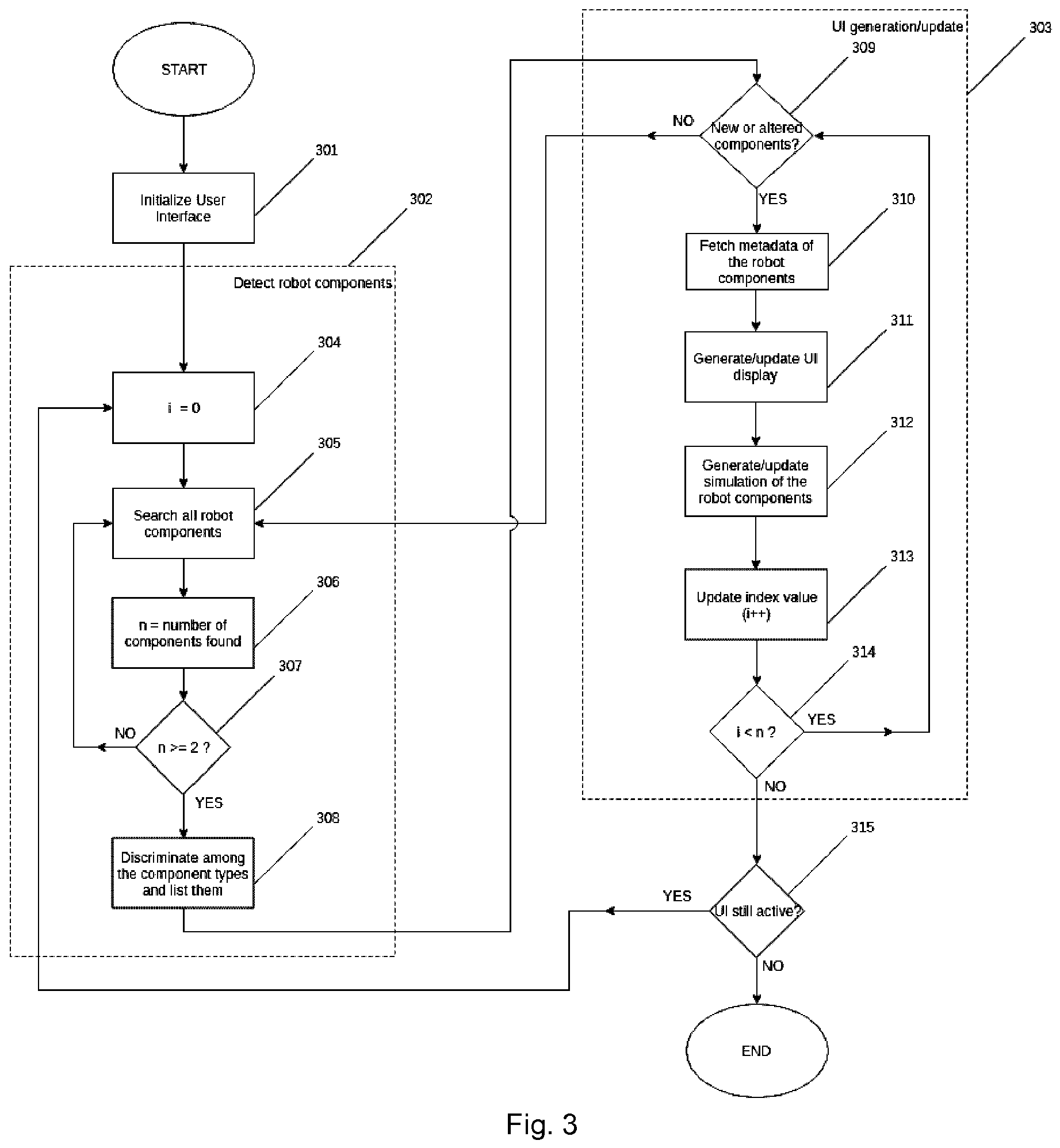 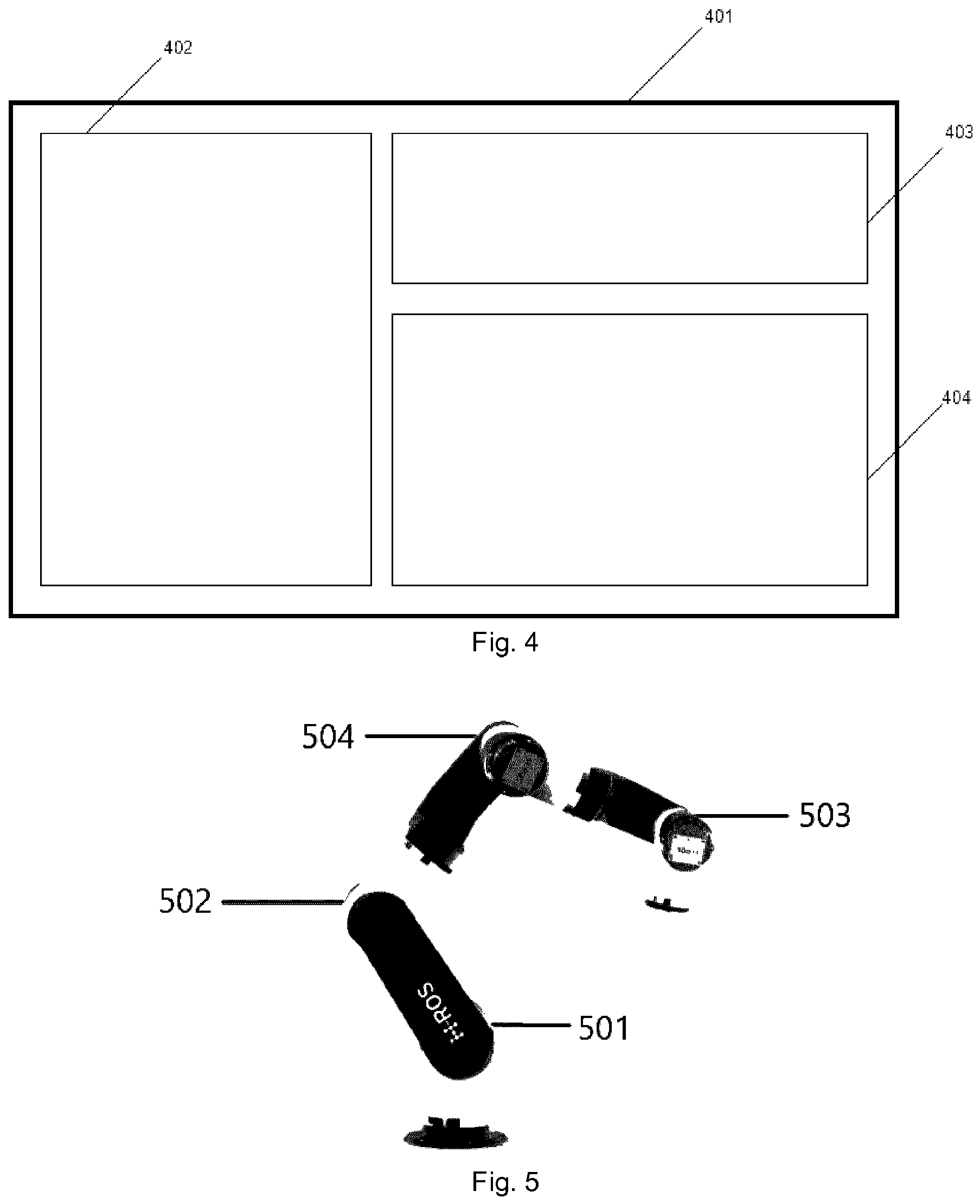 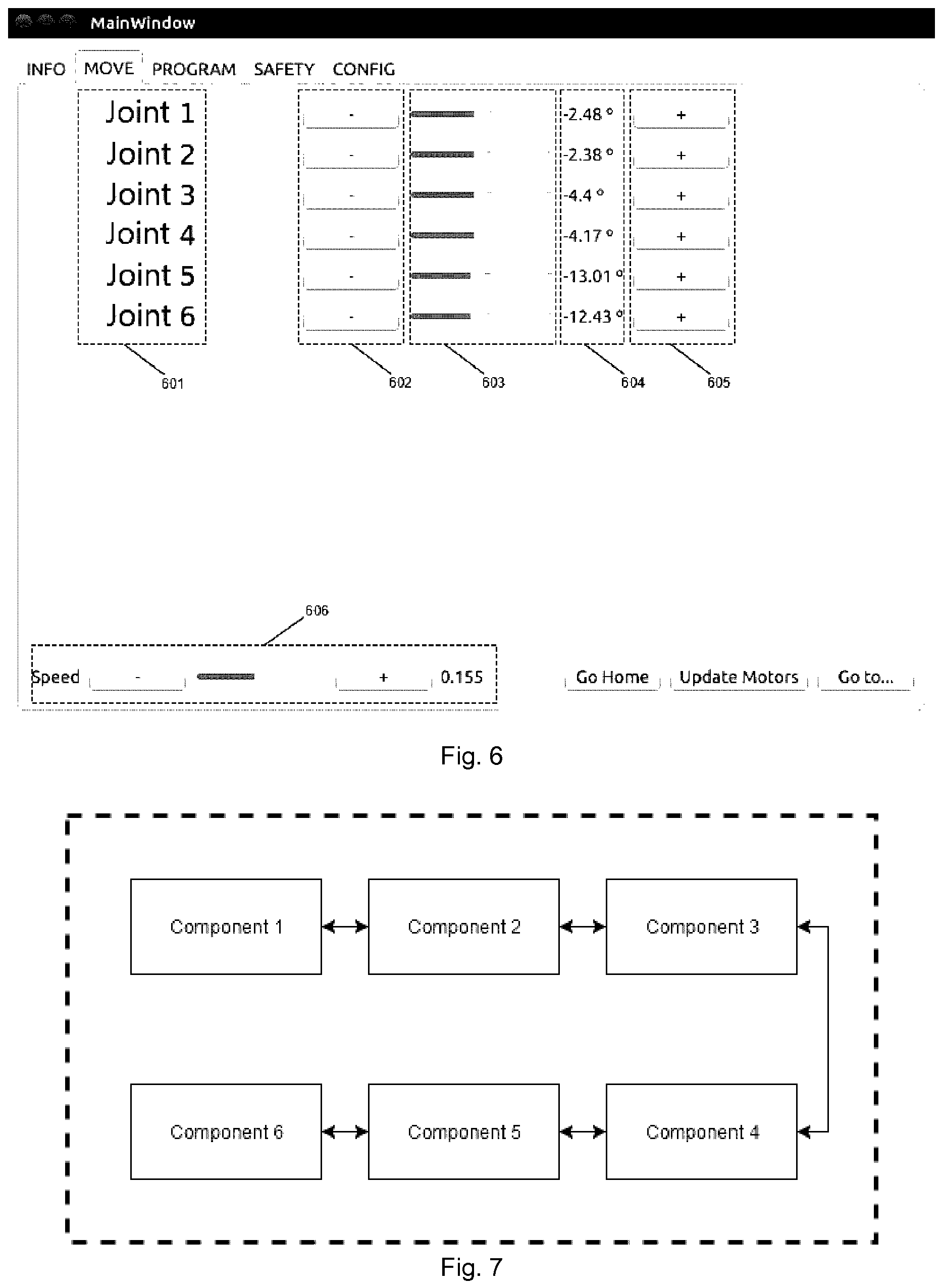 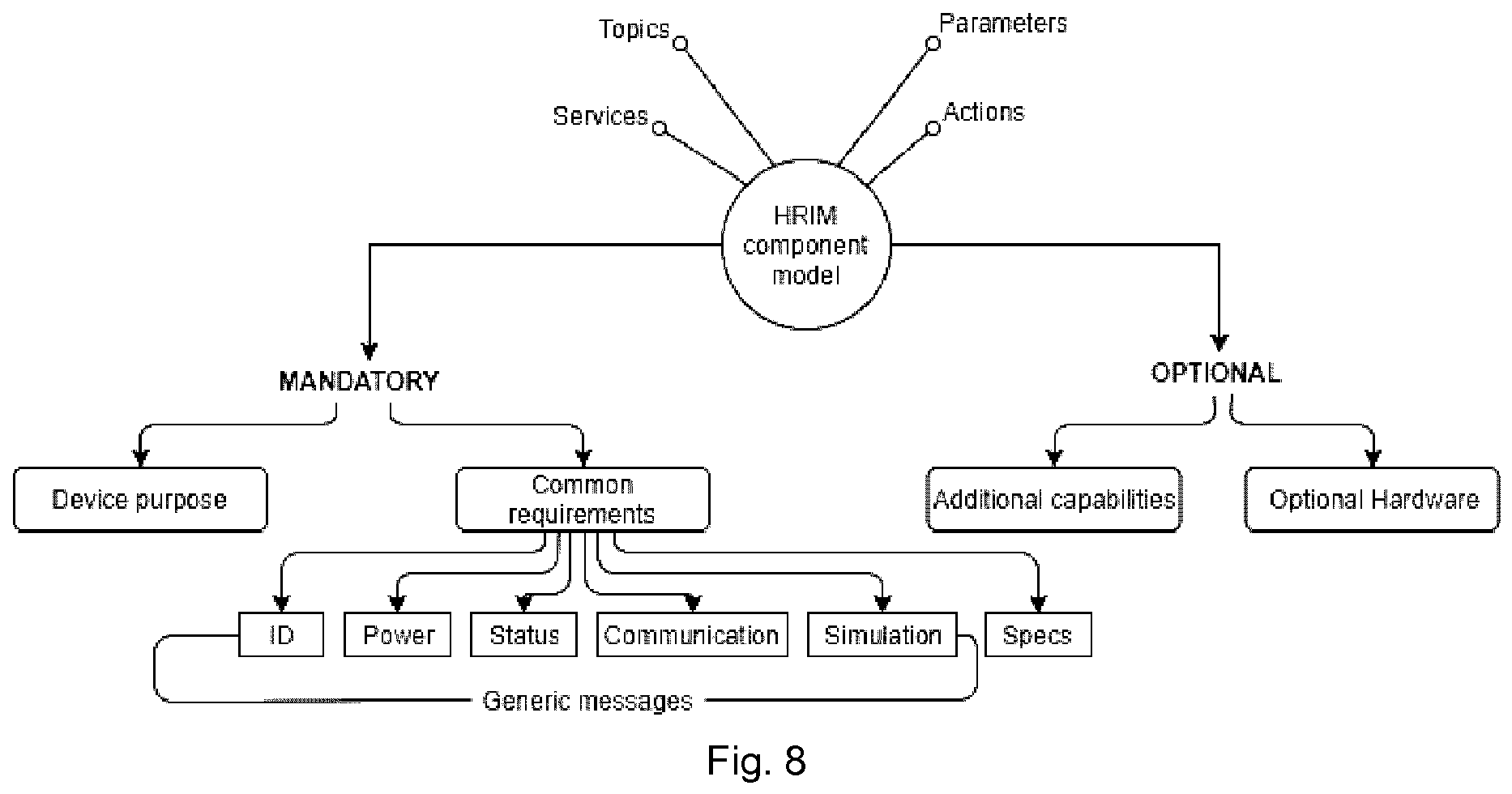 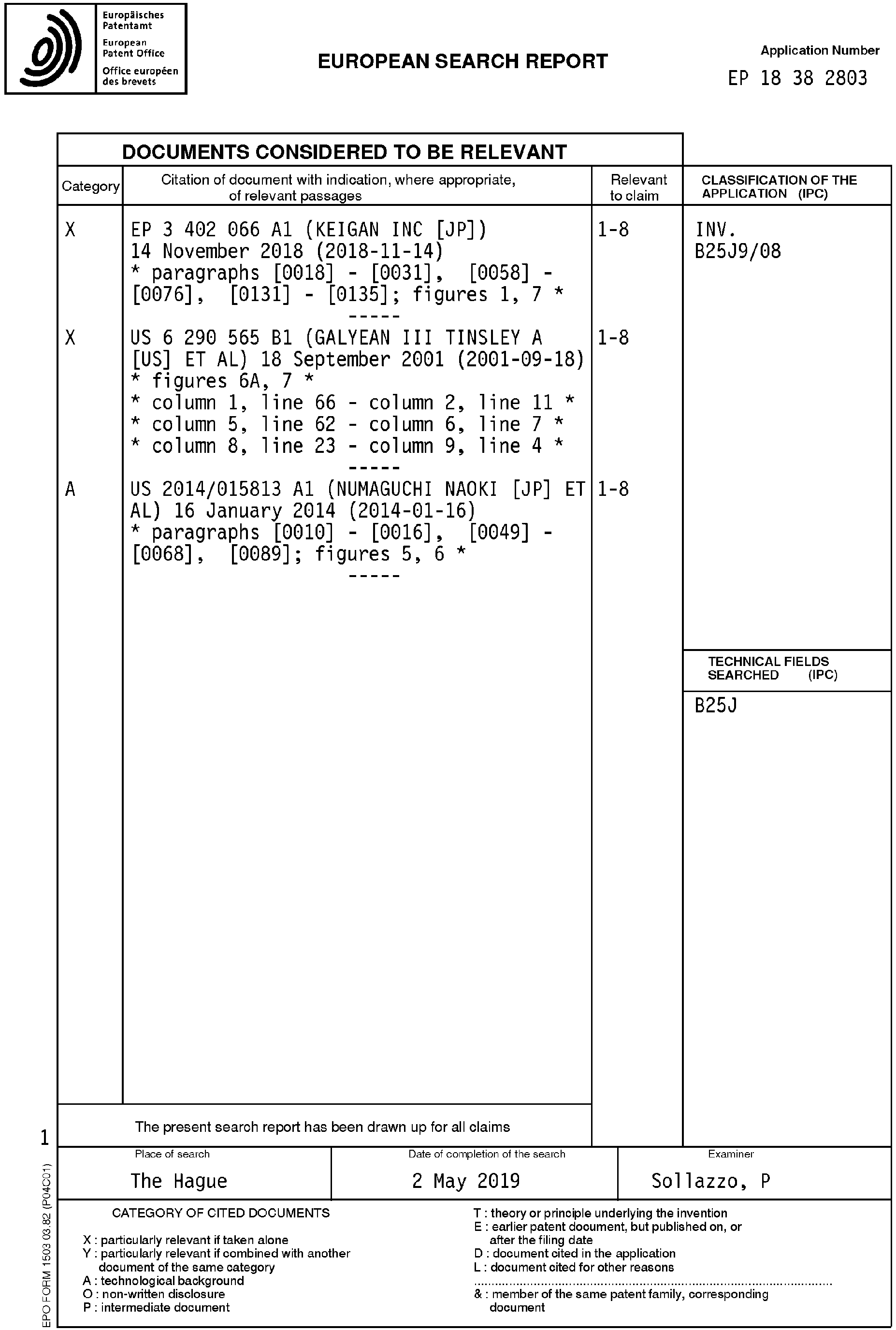 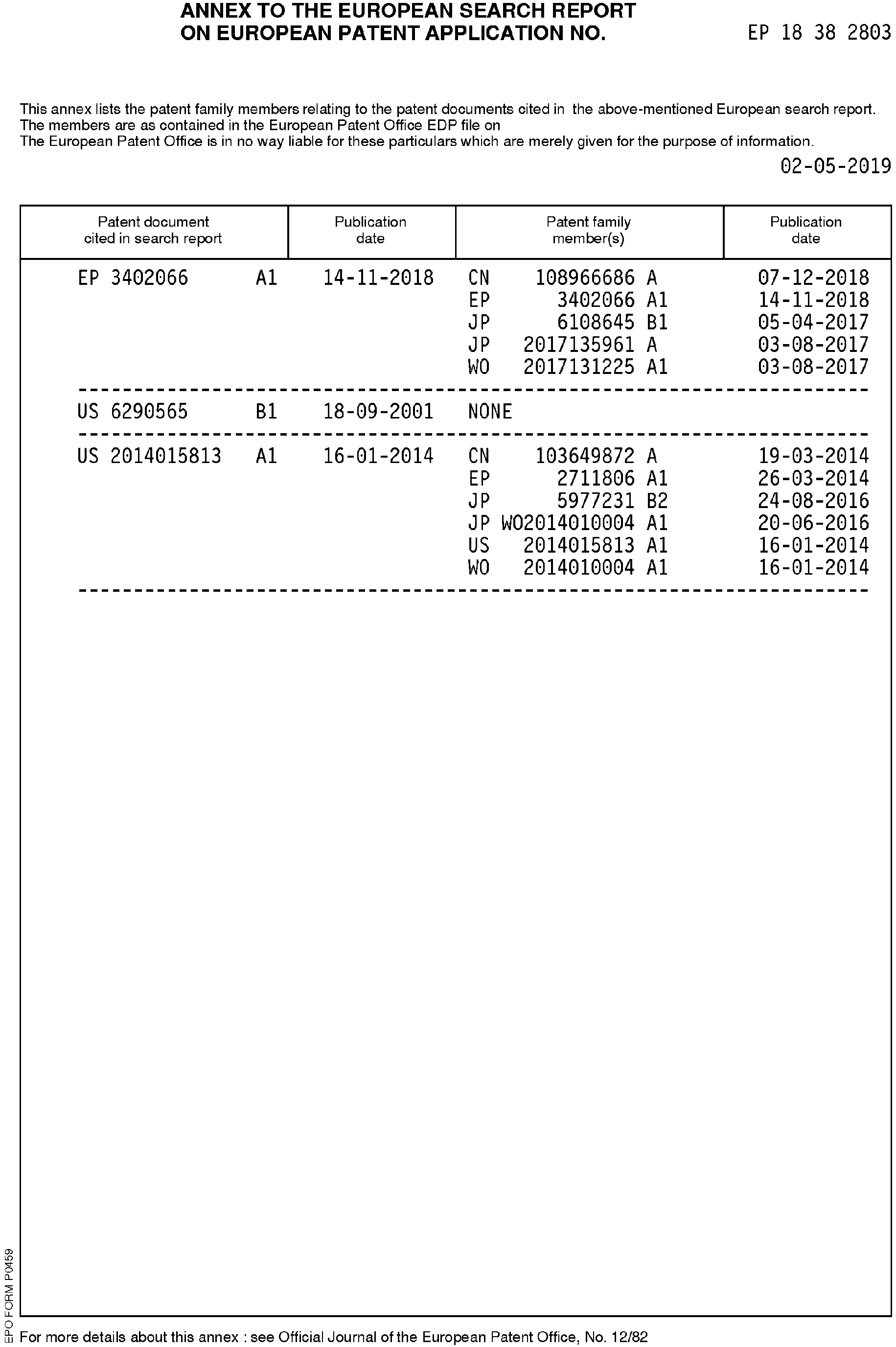