[0001] The present invention relates to an arrangement for thermal management of thermally conditioned objects and a method for assembling same. The arrangement comprises heat exchangers that can be of a thin flat design and made out of extruded aluminium metal or an extruded aluminium alloy, and further being provided with connectors for the inlet and outlet of a medium.
[0002] Heat exchangers of thin, flat design can be applied for thermal management of batteries in electrical vehicles (EV's) or for thermal management of other applications where a slim design is required.
[0003] In applications as mentioned above, the weight of these kind of systems are of immense importance due to increasing requirements for lowering energy consumption of transportation vehicles. The weight of a thermal management system of this art will be dependent upon several factors such as the weight of the materials of the heat exchangers with tubing and fittings for the flow of the conditioning medium as well as the amount and weight of the conditioning medium itself. In some applications the heat exchanger itself must be constructed with sufficient strength to protect for instance the batteries in an EV.
[0004] Commonly, the connectors for guiding flow of a medium to/from the heat exchangers are welded or brazed to the heat exchanger. If the walls of the heat exchanger are thick enough a threaded connector may be applied and fixed by mating threads in the heat exchanger.
[0005] However, as there is an increasing demand for lower weight constructions that subsequently has resulted in applications of thinner walls of the heat exchangers, the present invention relates to a totally new design for a connector in a light weight application. The connector of the invention is easy to install and has shown to give sufficient tight and durable connection for low pressurized heat exchangers with thin walls. Further, the connector can be installed by simply drilling a hole through two parallel walls of a closed hollow section and bringing one part of the connector through both holes in the panels from one side and locking the connector from the other side. According to the present invention it is superfluous to bring in a separate support ring or the similar into the hollow section for support. This gives more freedom in the design of the heat exchangers that for instance can be finished as a closed hollow section in the heat exchanger plant, where the adaption and fixation of the connectors can be done on site as the heat exchanger is installed in a vehicle, or it can be done in a separate assembly line.
[0006] EP 0 021 161 A1 discloses a connector device for gaseous or liquid media in flat hollow bodies. A spray ring, which has a larger diameter than the bore through the flat hollow body, is plugged between the two boundary surfaces of the hollow body. A connecting socket is then introduced through the interior of this spray ring (and through the flat hollow body), which connecting socket has on one side a pressure plate which bears against one side of a boundary surface of the flat hollow body; the connecting socket is bored through at the level of the spray ring. On the other side of the flat hollow body, the connecting socket bears a counterpressure plate. Via a thread, pressure plate and counterpressure plate press the boundary surfaces of the flat hollow body onto the spray ring in a liquid-tight and gas-tight fashion.
[0007] JP 5997391 U discloses a connector for inlet and outlet of a medium to and from heat exchangers comprising two parallel plates with a wave-like structure between them and where mounting holes in the plates are of different sizes. The connector comprises a tubular body with a first end and a second end, and further having a centrally arranged bore where the bore has a number of radially oriented ports at said first end communicating with an interior space of a heat exchanger. The body has a cap device with external threads that mates internal threads of the bore. During fixation, a flange of the cap abuts an exterior side of a first wall of the heat exchanger in a sealed manner while the said first end of the tubular body abuts an interior side of said first wall. At the opposite side, the tubular body comprises a flange that abuts in a sealed manner an exterior side of a second wall of the heat exchanger. The second end of the bore comprises a connector for a pipe for conducting the medium.
[0008] NL 1034648 discloses a heat exchanger for greenhouses of polycarbonate structure with meander shaped channels formed between two walls. A connection for water inlet / water outlet is disclosed.
[0009] US 2016/0064305 A1 discloses a stacked unit including a semiconductor and a plurality of coolers each having a flow passage through which coolant flows for cooling the semiconductor module. A coolant supply-discharge pipe is configured to supply the coolant to the coolers or discharge the coolant from the coolers. The coolers have preshaped holes 13 that is sealably connected with the supply-discharge pipe by O-rings.
[0010] According to the present invention there is provided an improved heat exchanger made from an extruded aluminium or aluminium alloy and further with an inlet and outlet design where:
[0011] These and further advantages can be obtained by the invention as defined by the following claims.
[0012] The invention will be further described in detail in the following by means of examples and with reference to the attached drawings, where:

1. Arrangement for thermal management of thermally conditioned objects, such as electric batteries, comprising a plate shaped heat exchanger (10) that includes one or more extruded plate shaped profiles with at least one channel (14) arranged between one first and one second parallel wall (12, 13) of the profile and further having side walls (13', 13"), the arrangement further comprises one or more connectors (1, 1') connected with a hole(s) in said heat exchanger for inlet and outlet of a medium to and from the heat exchanger for heat exchange or heat recovery, the connector (1, 1') comprises a body (3) with a first end and a second end and further having a centrally arranged bore (7) where the bore has at least one radially oriented port (4) that communicates with said at least one channel (14), and where the first end of the body has a cap device (5) that closes the bore and abuts the first wall (12) in a sealed manner, and where a flange (2) abuts in a sealed manner the second wall (13), where the second end of the bore has a connector for a pipe for conducting the medium,
characterised in that
the said cap device (5) and the said flange (2) are supported by a constructional feature (13', 13"; S) that distributes clamping force.

2. Arrangement according to claim 1,
characterised in that
the said cap device (5) and the said flange (2) are supported by at least one part of at least one of the said side walls (13', 13") so that clamping force is distributed via said walls.

5. Arrangement according to claim 1,
characterised in that
the flange (2) of the connector (1, 1') is an integrated part of the body (3).

6. Arrangement according to claim 1,
characterised in that
the flange (2) of the connector (1, 1') is provided with internal threads mating external threads of the body (3).

7. Arrangment according to claim 1,
characterised in that
the said flanges of the connector (1, 1') are provided with a seal.

8. Arrangment according to claim 1,
characterised in that
the said flanges of the connector (1, 1') are provided with an annular recess for a sealing ring.

10. Arrangment according to claim 1,
characterised in that
the said cap (5,) is provided with an annular recess for a sealing ring.

11. Arrangement according to claim 1,
characterised in that
the second end of the body (3) has an angled portion (AP).

12. Arrangment according to claim 1,
characterised in that
the hole for the connector (1, 1') is arranged between reinforcing ribs of the plate shaped heat exchanger (F).

13. A method for assembling the arrangement as defined in claims 1-12,
characterised in that
holes of same size are made through the both parallel plates in the plate shaped heat exchanger (10) where the holes further communicates with a channel (14), a suitable connector is selected so that; the at least a part of the flange and the cap extend to be supported by at least one wall of the channel or a dense non-hollow section of the heat exchanger or in the alternative the cap itself has a seat, for distribution of clamping forces, where one first part of the connector is entered into the bore(s), whereafter the other part is put together with the first part wherein the parts are fixedly connected together to obtain a sealed connection. 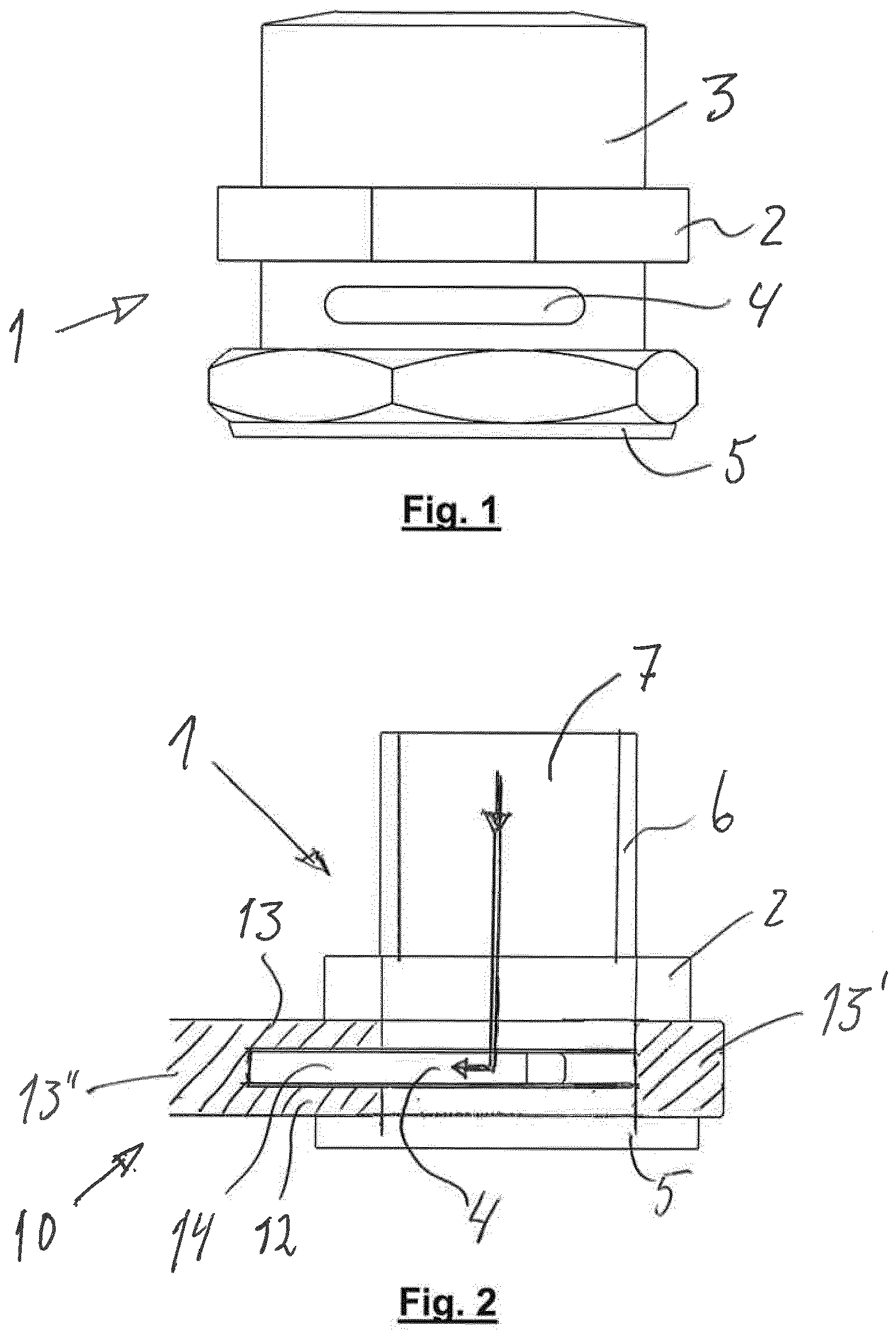 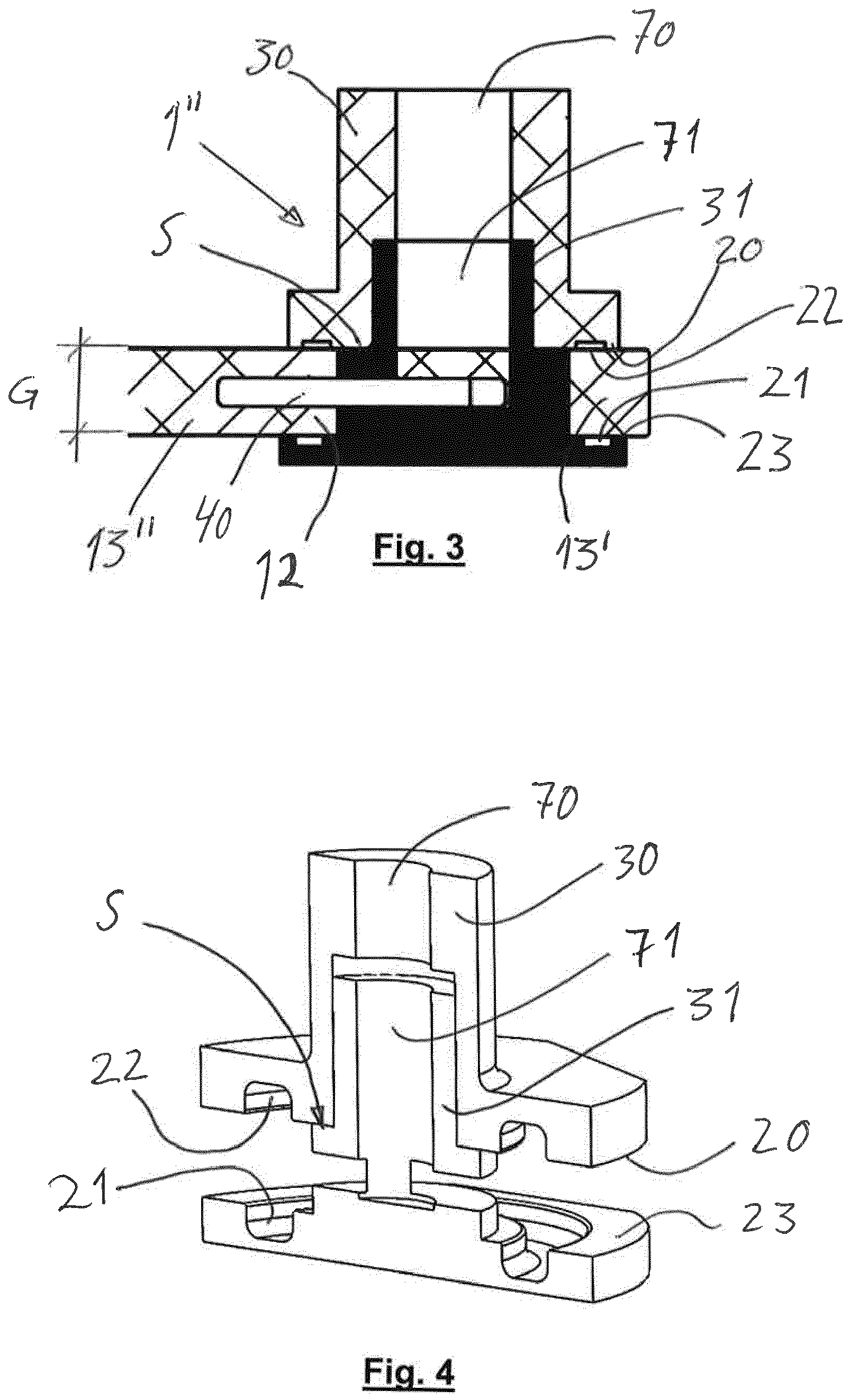 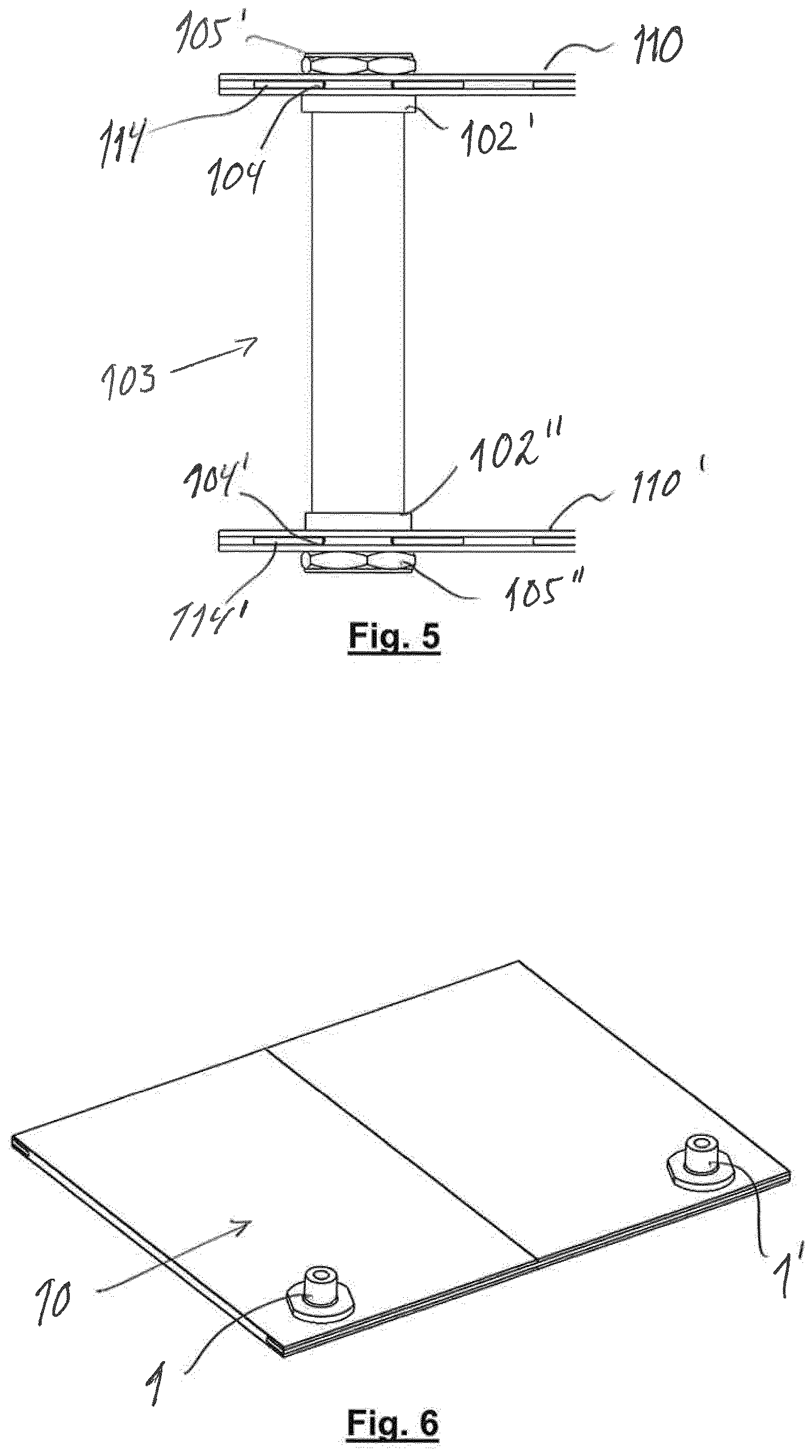 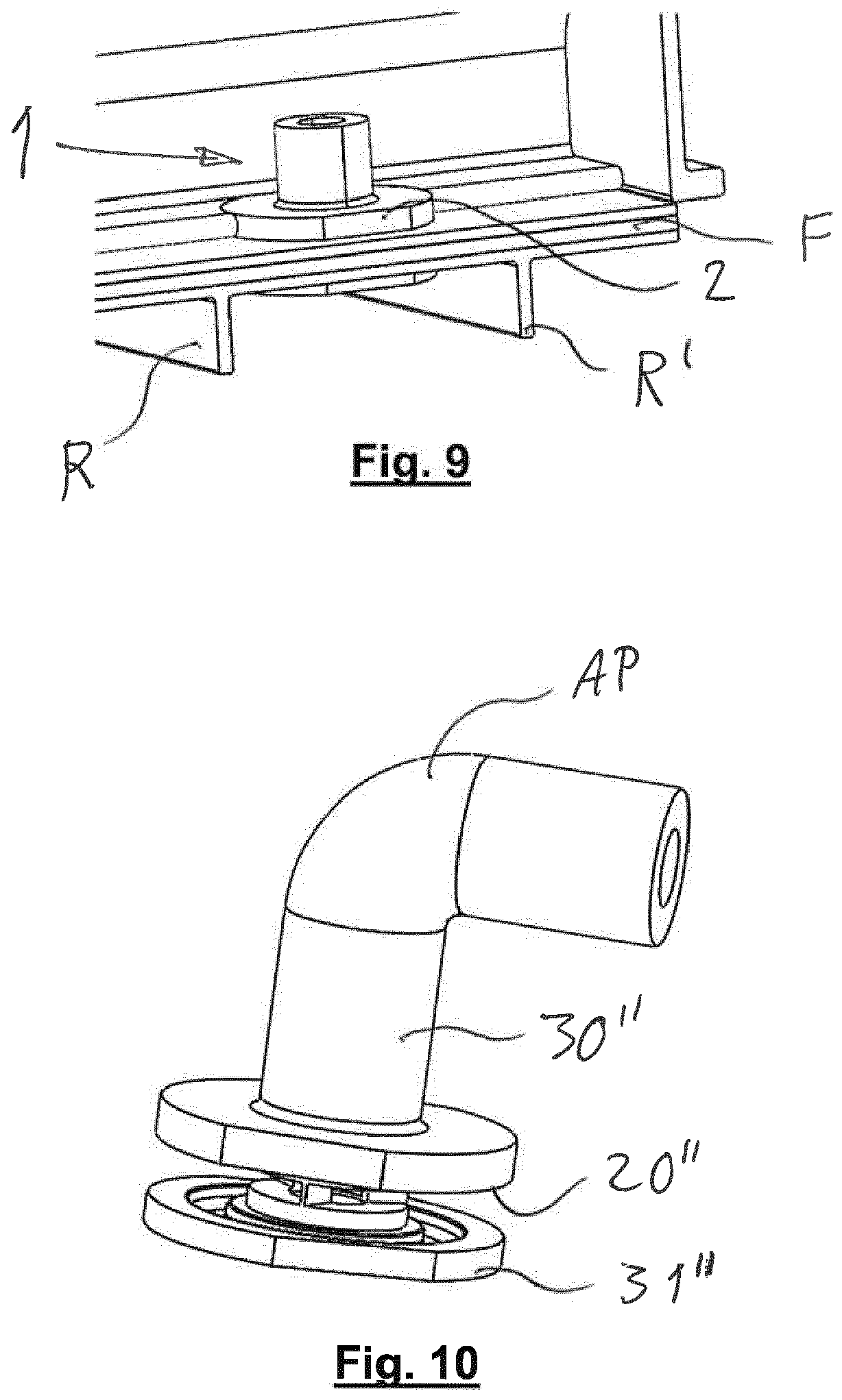 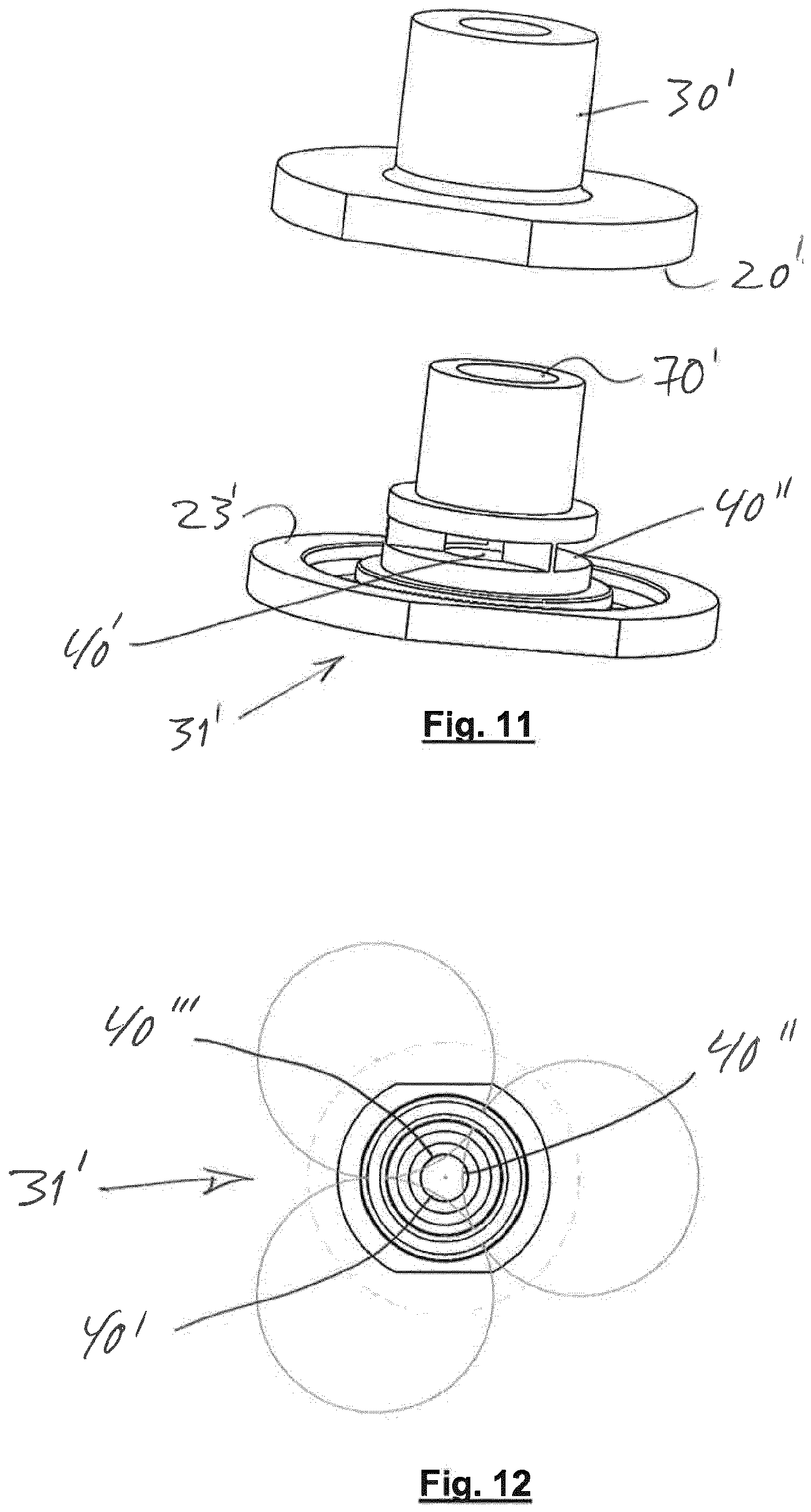 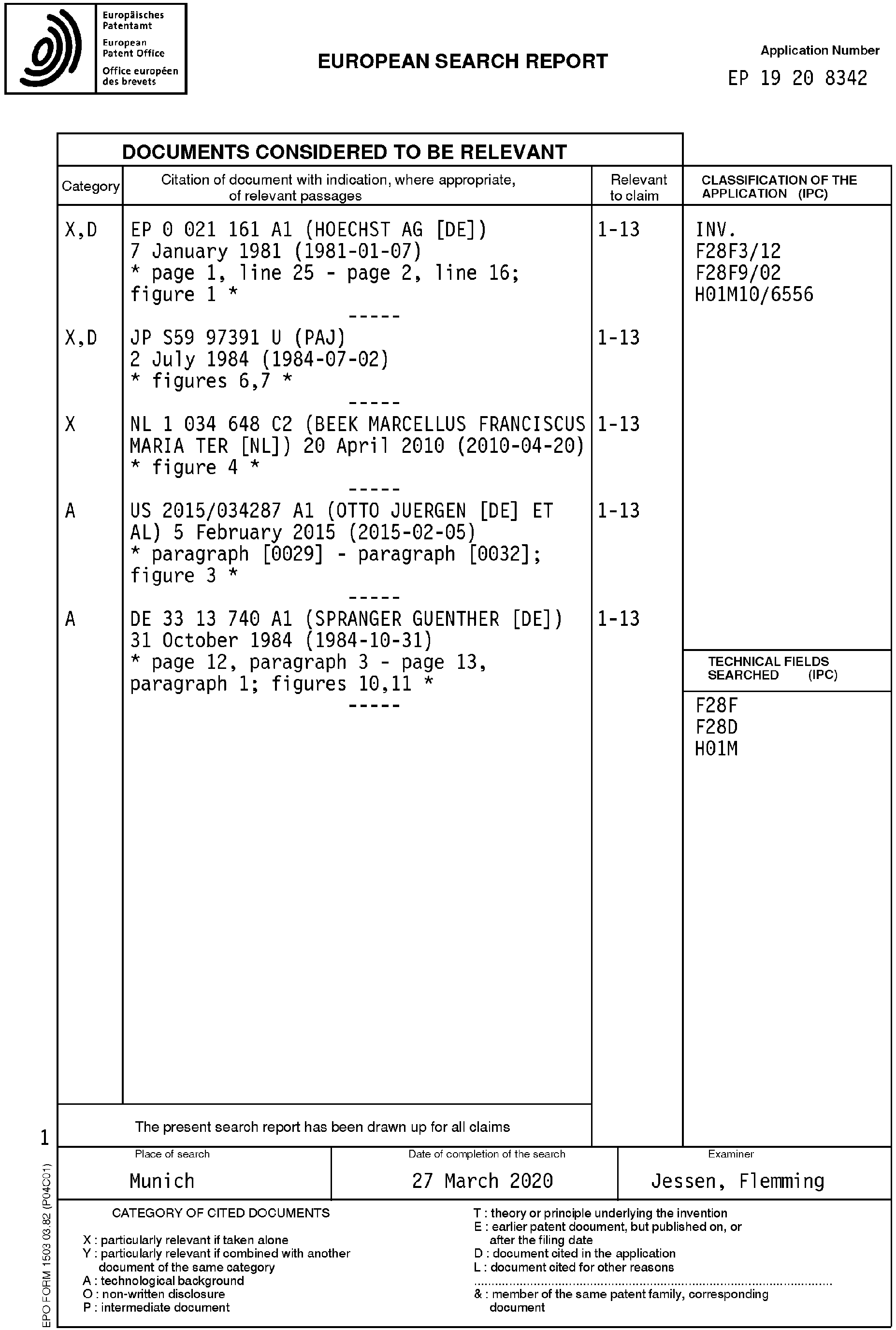 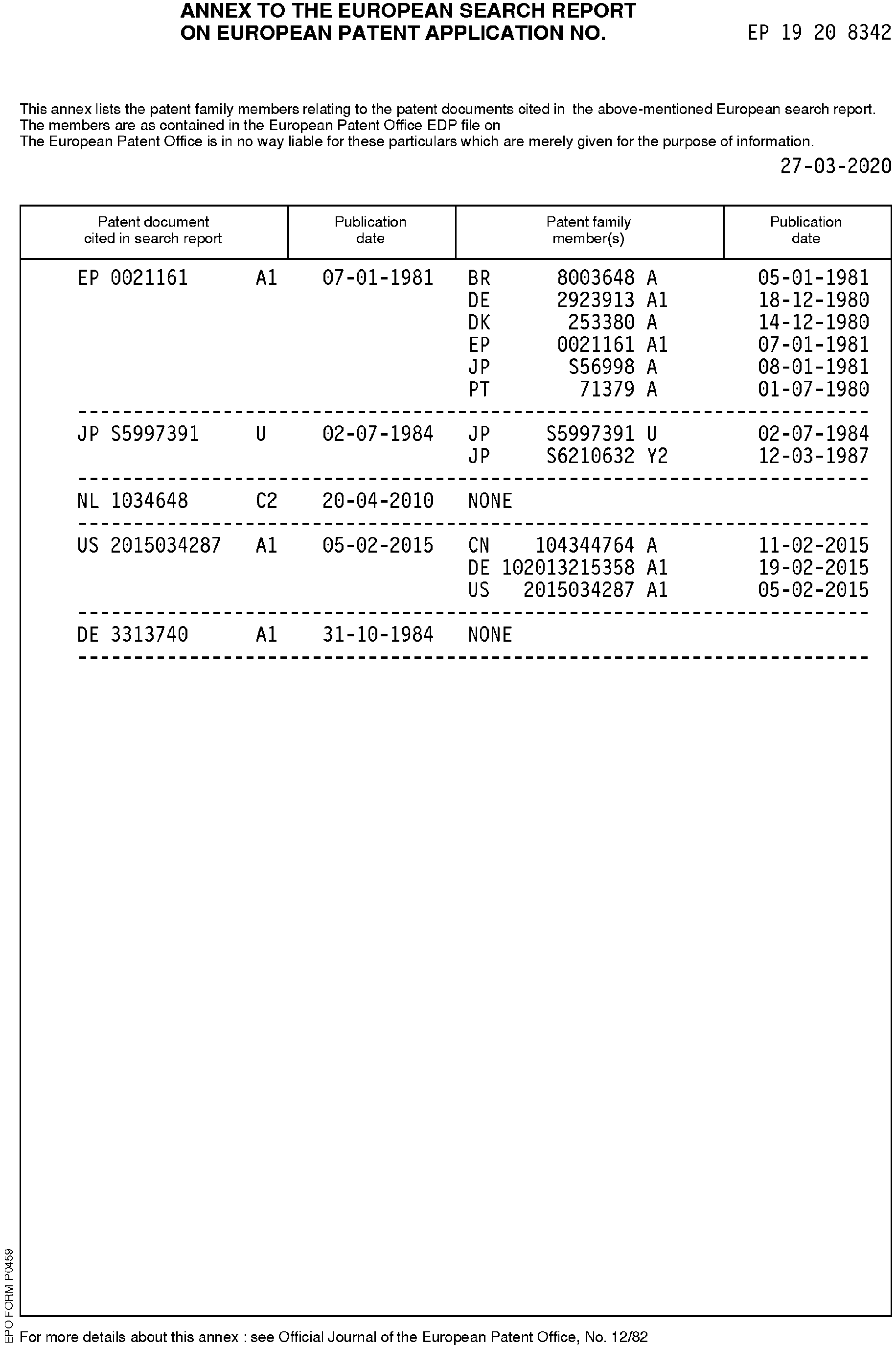