[0001] The present invention relates to methods and apparatus for applying patterns to a substrate in a lithographic process and/or measuring said patterns.

[0002] A lithographic apparatus is a machine that applies a desired pattern onto a substrate, usually onto a target portion of the substrate. A lithographic apparatus can be used, for example, in the manufacture of integrated circuits (ICs). In that instance, a patterning device, which is alternatively referred to as a mask or a reticle, may be used to generate a circuit pattern to be formed on an individual layer of the IC. This pattern can be transferred onto a target portion (e.g. comprising part of, one, or several dies) on a substrate (e.g. a silicon wafer). Transfer of the pattern is typically via imaging onto a layer of radiation-sensitive material (resist) provided on the substrate. In general, a single substrate will contain a network of adjacent target portions that are successively patterned. Known lithographic apparatus include so-called steppers, in which each target portion is irradiated by exposing an entire pattern onto the target portion at one time, and so-called scanners, in which each target portion is irradiated by scanning the pattern through a radiation beam in a given direction (the "scanning"-direction) while synchronously scanning the substrate parallel or anti-parallel to this direction. It is also possible to transfer the pattern from the patterning device to the substrate by imprinting the pattern onto the substrate.
[0003] In order to monitor the lithographic process, parameters of the patterned substrate are measured. Parameters may include, for example, the overlay error between successive layers formed in or on the patterned substrate and critical linewidth (CD) of developed photosensitive resist. This measurement may be performed on a product substrate and/or on a dedicated metrology target. There are various techniques for making measurements of the microscopic structures formed in lithographic processes, including the use of scanning electron microscopes and various specialized tools. A fast and non-invasive form of specialized inspection tool is a scatterometer in which a beam of radiation is directed onto a target on the surface of the substrate and properties of the scattered or reflected beam are measured. Two main types of scatterometer are known. Spectroscopic scatterometers direct a broadband radiation beam onto the substrate and measure the spectrum (intensity as a function of wavelength) of the radiation scattered into a particular narrow angular range. Angularly resolved scatterometers use a monochromatic radiation beam and measure the intensity of the scattered radiation as a function of angle.
[0004] Examples of known scatterometers include angle-resolved scatterometers of the type described in US2006033921A1 and US2010201963A1. The targets used by such scatterometers are relatively large, e.g., 40µm by 40µm, gratings and the measurement beam generates a spot that is smaller than the grating (i.e., the grating is underfilled). In addition to measurement of feature shapes by reconstruction, diffraction based overlay can be measured using such apparatus, as described in published patent application US2006066855A1. Diffraction-based overlay metrology using dark-field imaging of the diffraction orders enables overlay measurements on smaller targets. Examples of dark field imaging metrology can be found in international patent applications WO 2009/078708 and WO 2009/106279 which documents are hereby incorporated by reference in their entirety. Further developments of the technique have been described in published patent publications US20110027704A, US20110043791A, US2011102753A1, US20120044470A, US20120123581A, US20130258310A, US20130271740A and WO2013178422A1. These targets can be smaller than the illumination spot and may be surrounded by product structures on a wafer. Multiple gratings can be measured in one image, using a composite grating target. The contents of all these applications are also incorporated herein by reference.
[0005] In performing semiconductor manufacturing processes, such as application of a pattern on a substrate or measurement of such a pattern, process control methods are used to monitor and control the process. Such process control techniques are typically performed based on a control strategy so as to obtain corrections for semiconductor manufacturing processes based on a metrology effort. By increasing the metrology effort, in principle, better corrections and control can be achieved (within limits). However, metrology takes time and therefore will effect throughput, productivity and therefore profitability of a manufacturing process.
[0006] It would be desirable to provide more training data for training a model used to advise on a manufacturing process.

[0010] Embodiments of the invention will now be described, by way of example, with reference to the accompanying drawings in which:

Figure 1 depicts a lithographic apparatus together with other apparatuses forming a production facility for semiconductor devices;

Figure 2 is a flowchart describing an automated method for selecting an optimal control strategy; and

Figure 3 is a flowchart describing a method of generating synthetic training data for training a model used in Figure 2.

determining, from said behavioral property data and/or metrology data, said synthetic metrology data describing the effect of variations in said manufacturing process, and/or a related tool or effect on said process parameter; and 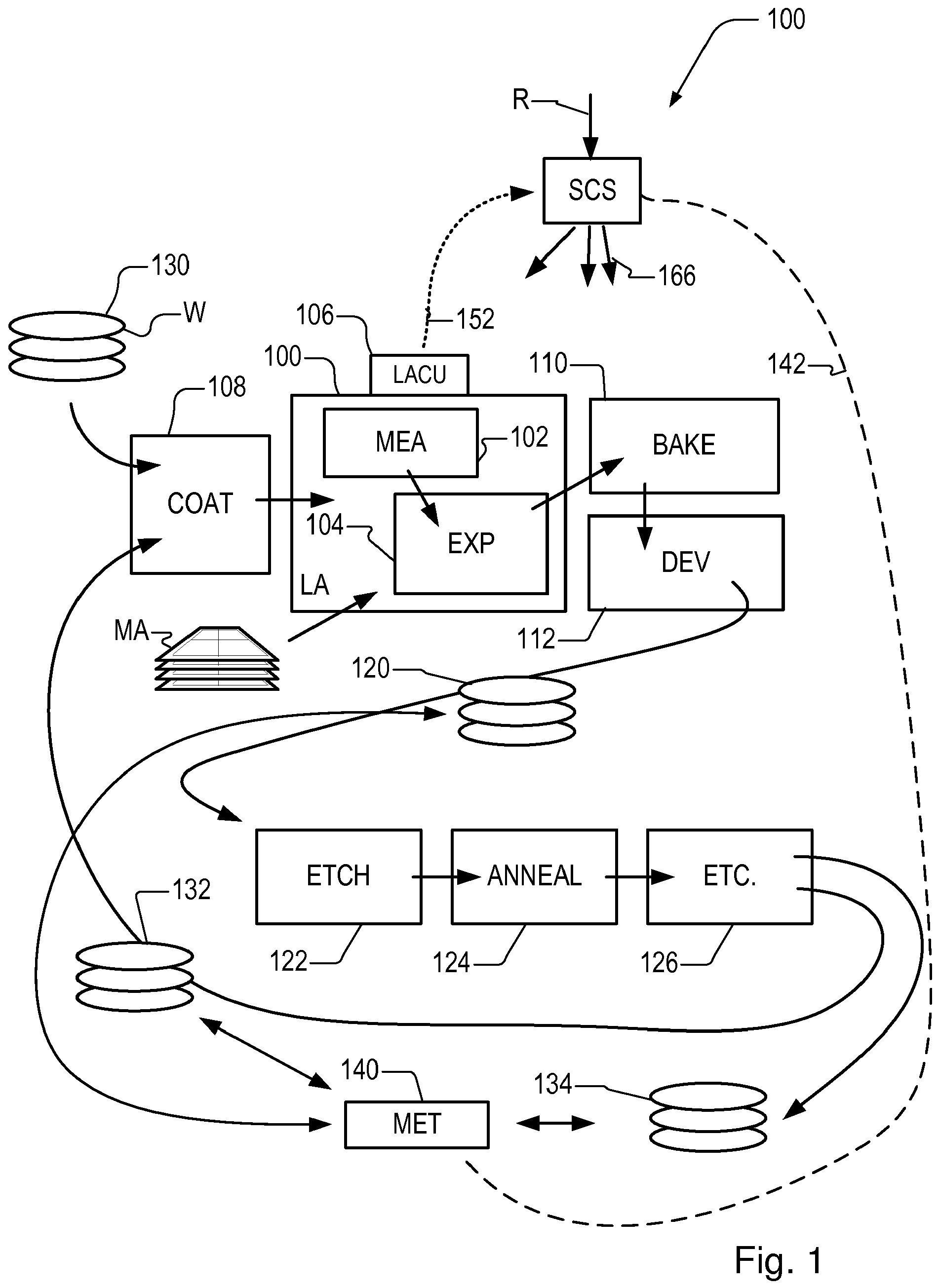 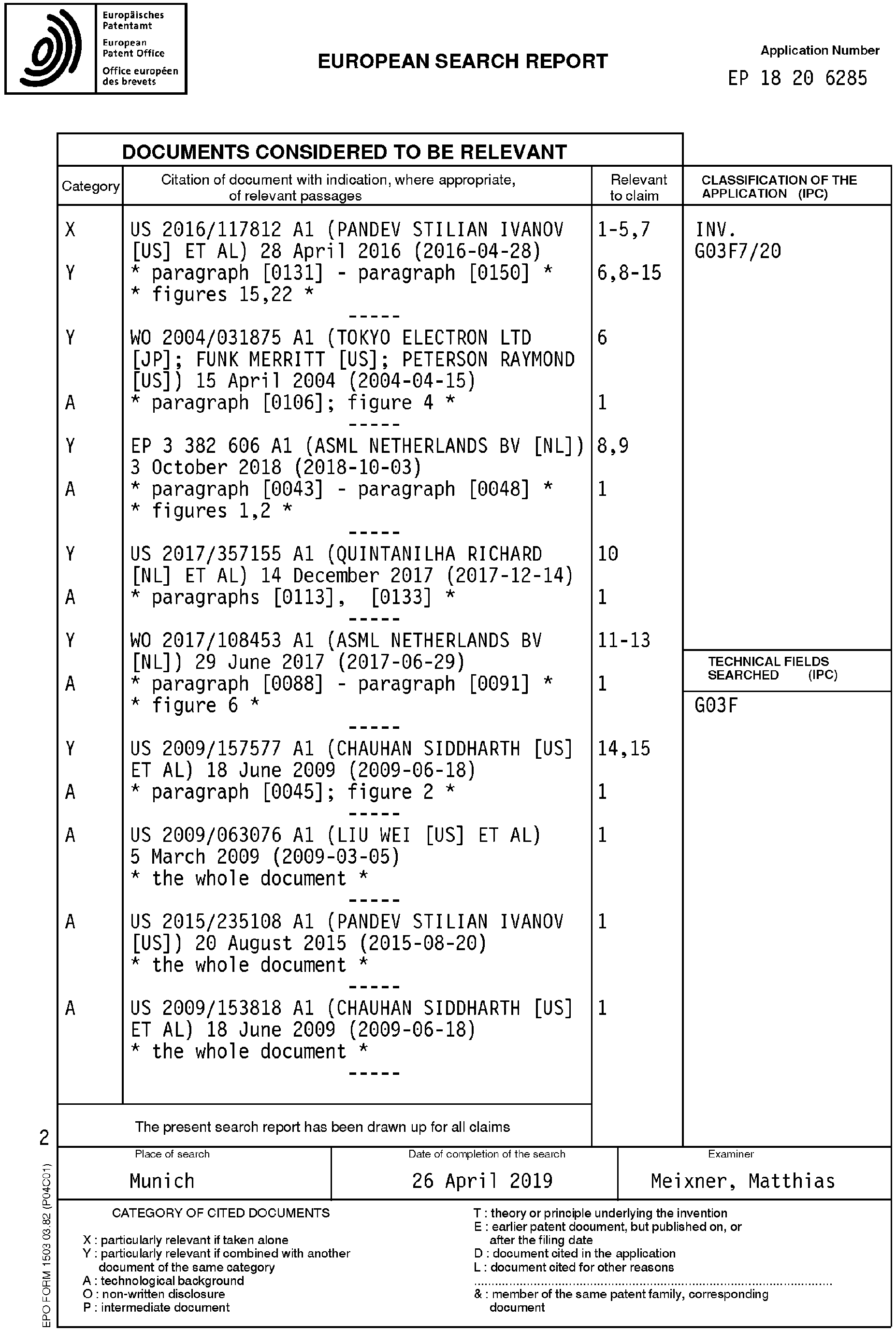 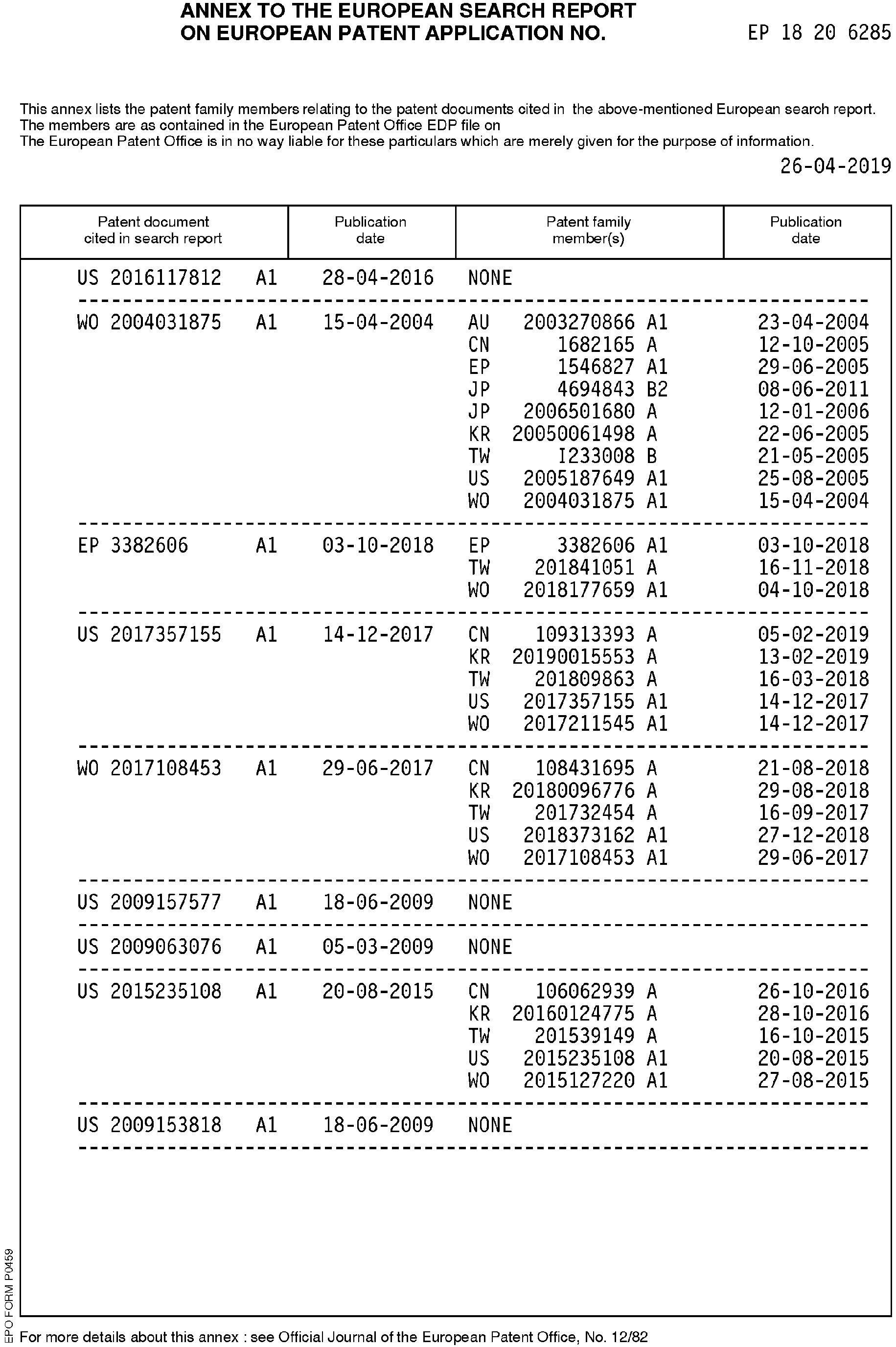