and the interval [l, h] is the input domain.
In our work, we provide a theoretical foundation for the fact that in deep convolutional rectifier neuron network, the ReLU masks and Pooling Switches decide the pattern visualized in the explanation, which is independent of class information. That is the reason why the explanations (saliency maps) generated by LRP on DCNNs are not class-discriminative. The analysis also explains the non-discriminative explanations generated by other backpropagation approaches, such as the DeConvNets Visualization, The vanilla Gradient Visualization and the Guided Backpropagation.
[0068] Therefore, we amended and generalized the above mentioned known backpropagation-based algorithms to provide a new algorithm, called Contrastive Layer-wise Relevance Propagation, in short CLRP, for getting a class discriminative explanation in the form of a saliency map.

[0069] Before introducing our CLRP, we first discuss the conservative property in the LRP. In a DNN, given the input X = {x1, x2, x3 , ···, xn}, the output Y = {y1 , y2 , y3 , ···, ym}, the score Syj (activation value) of the neuron yj before softmax layer, the LRP generate an explanation for the class y j by redistributing the score Syj layer-wise back to the input space. The assigned relevance values of the input neurons are R = {r1 , r2 , r3 , ···, rn}. The conservative property is defined as follows:
Definition 1. The generated saliency map is conservative if the sum of assigned relevance values of the input neurons is equal to the score of the class-specific neuron,

[0070] In this section, we consider redistributing the same score from different class-specific neurons respectively. The assigned relevance R are different due to different weight connections. However, the non-zero patterns of those relevance vectors are almost identical, which is why LRP generate almost the same explanations for different classes. The sum of each relevance vector is equal to the redistributed score according to the conservative property. The input variables that are discriminative to each target class are a subset of input neurons, i.e., X dis ⊂ X. The challenge of producing the explanation is to identify the discriminative pixels X dis for the corresponding class. In the explanations of image classification, the pixels on salient edges always receive higher relevance value than other pixels including all or part of Xdis. Those pixels with high relevance values are not necessary discriminative to the corresponding target class. We observe that X dis receive higher relevance values than that of the same pixels in explanations for other classes. In other words, we can identify X dis by comparing two explanations of two classes. One of the classes is the target class to be explained. The other class is selected as an auxiliary to identify X dis of the target class. To identify X dis more accurately, we construct a virtual class instead of selecting another class from the output layer.
[0071] We propose at least two ways to construct the virtual class. The overview of the CLRP are shown in FIG. 6. For each predicted class, the approach generates a class-discriminative explanation by comparing two signals. The dash-dotted line (in Fig. 6 in the upper backward pass: the lower two lines and in the lower backward pass: the upper lines) means the signal that the predicted class represents. The dotted line (in Fig. 6 in the upper backward pass: the upper two lines and in the lower backward pass: the lower lines) models a dual concept opposite to the predicted class. The final explanation is the difference between the two saliency maps that the two signal generate.
[0072] We describe the CLRP formally as follows. The jth class-specific neuron y j is connected to input variables by the weights W = {W1 , W2 , ···, Wi-1 , Wij } of layers between them, where W i means the weights connecting the (i - 1)th layer and the ith layer, and Wij means the weights connecting the (i - 1)th layer and the jth neuron in the ith layer. The neuron y j models a visual concept O. For an input example X, the LRP maps the score S y j of the neuron back into the input space to get relevance vector R = f LRP (X, W, Syj).
[0073] We construct a dual virtual concept O which models the opposite visual concept to the concept O. For instance, the concept O models the zebra, and the constructed dual concept O models the non-zebra. One way to model the virtual concept O is to select all classes except for the target class representing O. The concept O is represented by the selected classes with weights W = {W1, W2 , ···, Wi-1 , Wi{-j}}, where Wi{-j} means the weights connected to the output layer excluding the jth neuron. E.g. the dot-dashed lines in FIG. 6 are connected to all classes except for the target class zebra. Next, the score Syj of target class is uniformly redistributed to other classes. Given the same input example X, the LRP generates an explanation R dual = f LRP (X, W, Syj) for the dual concept.
[0074] The Contrastive Layer-wise Relevance Propagation is defined as follows:

1. Computer-implemented method for verifying a visual classification architecture of a convolutional neural network (CNN), comprising the method steps of:

- Accessing (S1) a memory (MEM) with a convolutional neural network (CNN), being trained for a visual classification task into a set of target classes (tc);

- Applying (S4) an implicitly learned Bottom Up Attention pattern (BUAP), to verify a classification ability of the convolutional neural network (CNN) for providing (S5) a verification signal (vs).

2. Method according to claim 1, wherein the verification signal (vs) is provided as a saliency map for each feature on each layer of the convolutional neural network (CNN).

3. Method according to any of the preceding claims, wherein by applying (S3) the contrastive layer-wise relevance propagation algorithm (CLRP) class discriminative and instance-specific saliency maps are generated.

5. Method according to any of the preceding claims, wherein the CLRP algorithm (S3) comprises, the steps of:

- Generating (S31) a first saliency map for each target class (tc) of the classification task by means of a backpropagation algorithm;

- Generating (S33) a second saliency map for the set of virtual classes by means of a backpropagation algorithm;

- Computing (S34) the differences between the first and the second saliency map for computing a final saliency map.

6. Method according to the directly preceding claim, wherein calculating the virtual class for a specific target class (tc) is executed by:

- constructing the virtual class by generating an additional class and connecting it with a last layer using weights, wherein the weights are the inverted weights of the forward pass.

7. Method according to any of the preceding claims, wherein applying (S4) the Bottom Up Attention pattern (BUAP) comprises:

- Collecting and storing all features of the CNN, wherein a feature comprises all activations in a respective layer of the CNN for the input image;

- Creating a saliency map for each of the features.

9. Method according to any of the preceding claims, wherein application of the convolutional neural network (CNN) is only approved, if the provided verification signal (vs) is above a pre-configurable confidence threshold.

10. Method according to any of the preceding claims, wherein when applying a Bottom Up Attention pattern for generating a saliency map a guided backpropagation algorithm is used.

11. Method according to any of the preceding claims, wherein the generated saliency maps are post processed and/or may be refined and/or an averaging and/or a thresholding may be applied.

12. A verification unit (V) which is configured for verifying a visual classification architecture of a convolutional neural network (CNN), comprising:

- A memory (MEM) with a convolutional neural network (CNN), being trained for a visual classification task into a set of target classes (tc);

- to apply a contrastive layer-wise relevance propagation algorithm (CLRP) or

- to apply a Bottom Up Attention pattern (BUAP), which is implicitly learned by the CNN

- for generating a saliency map for each of the target classes (tc).

13. A computer program product comprising program elements which induce a computer to carry out the steps of the method for verifying a visual classification architecture of a convolutional neural network (CNN) according to one of the preceding method claims, when the program elements are loaded into a memory of the computer.

14. A computer-readable medium (MEM) on which a convolutional neural network (CNN) and program elements are stored that can be read and executed by a computer in order to perform steps of the method for verifying a visual classification architecture of the convolutional neural network (CNN) according to one of the preceding method claims, when the program elements are executed by the computer. 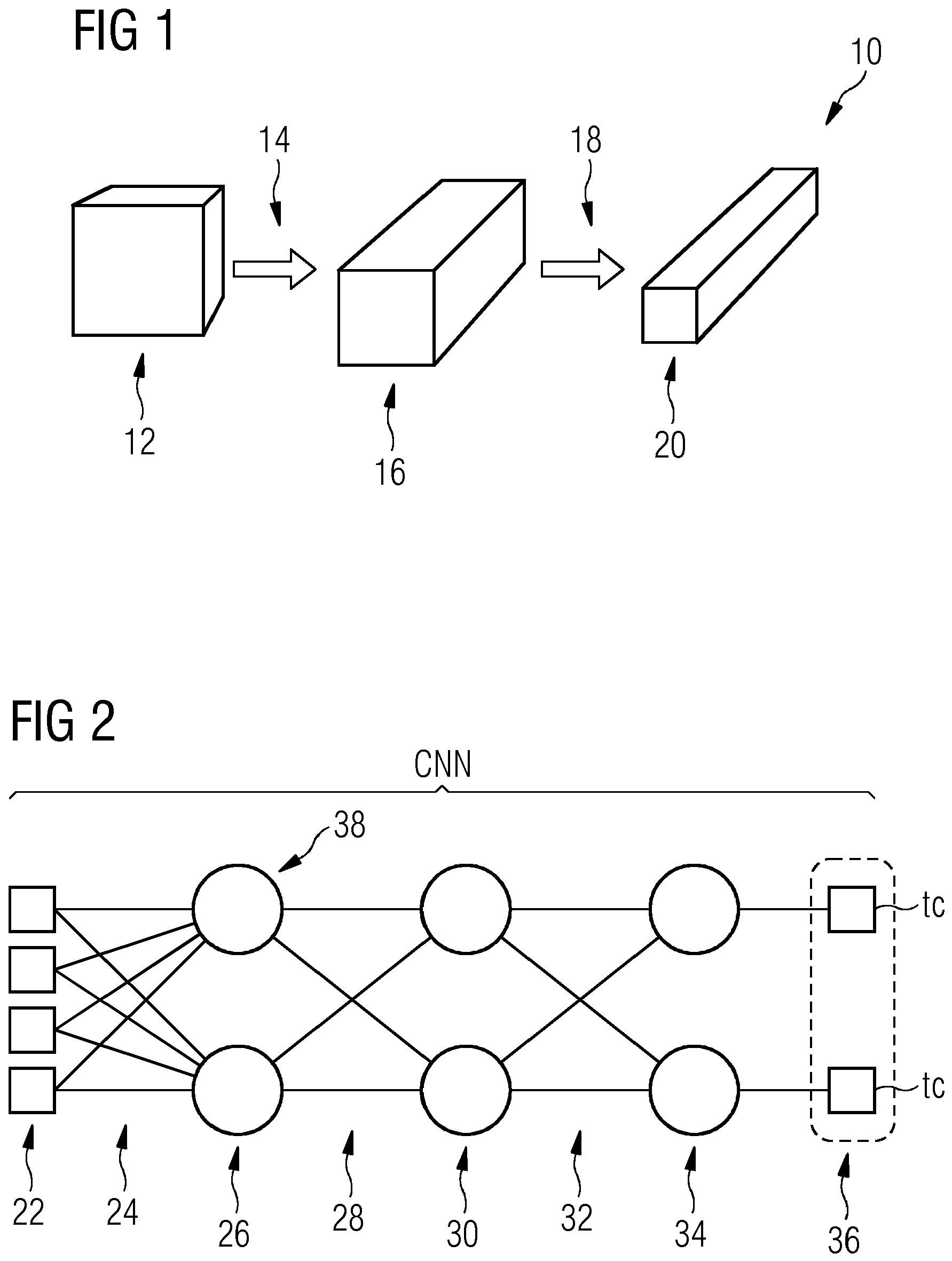 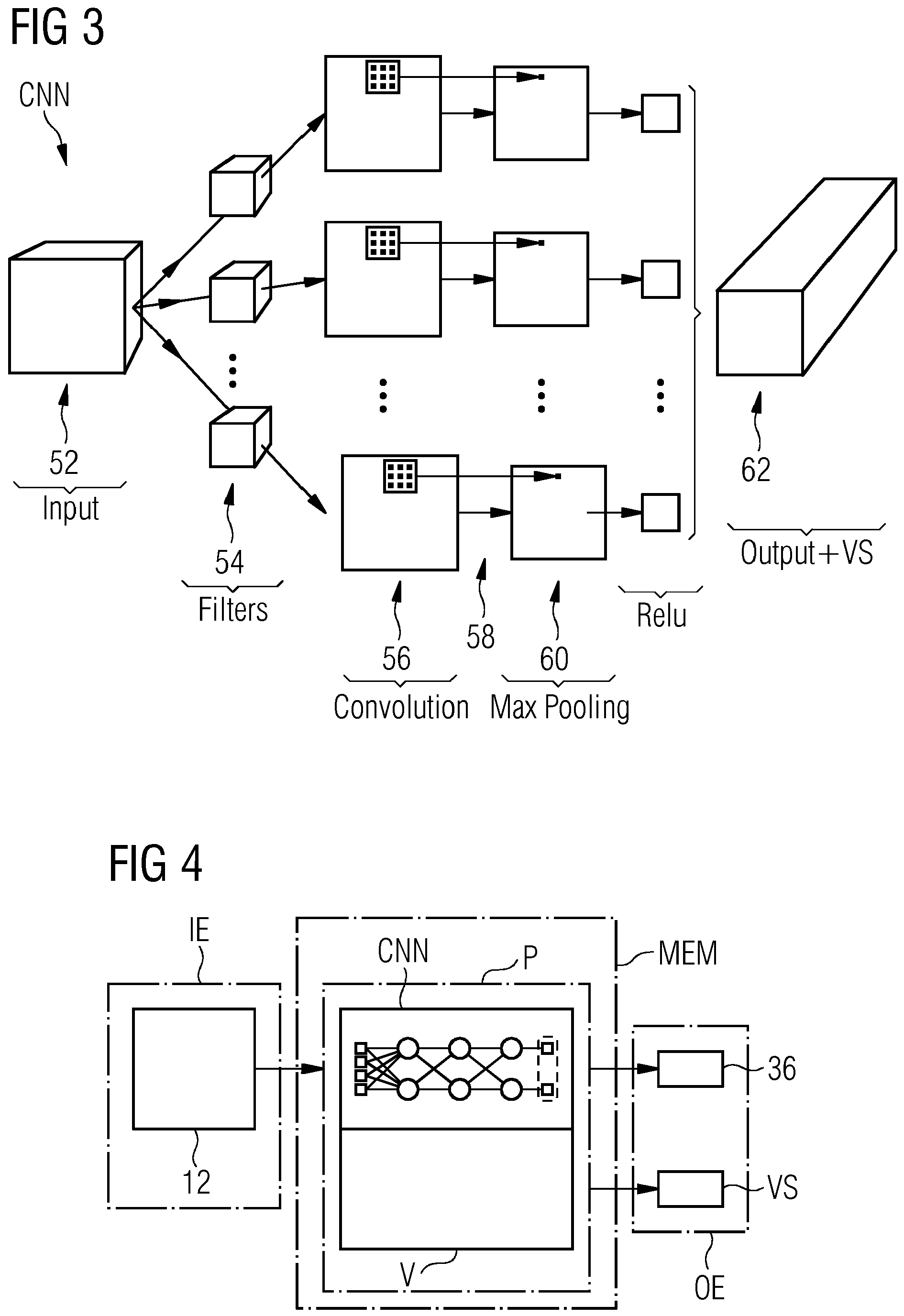 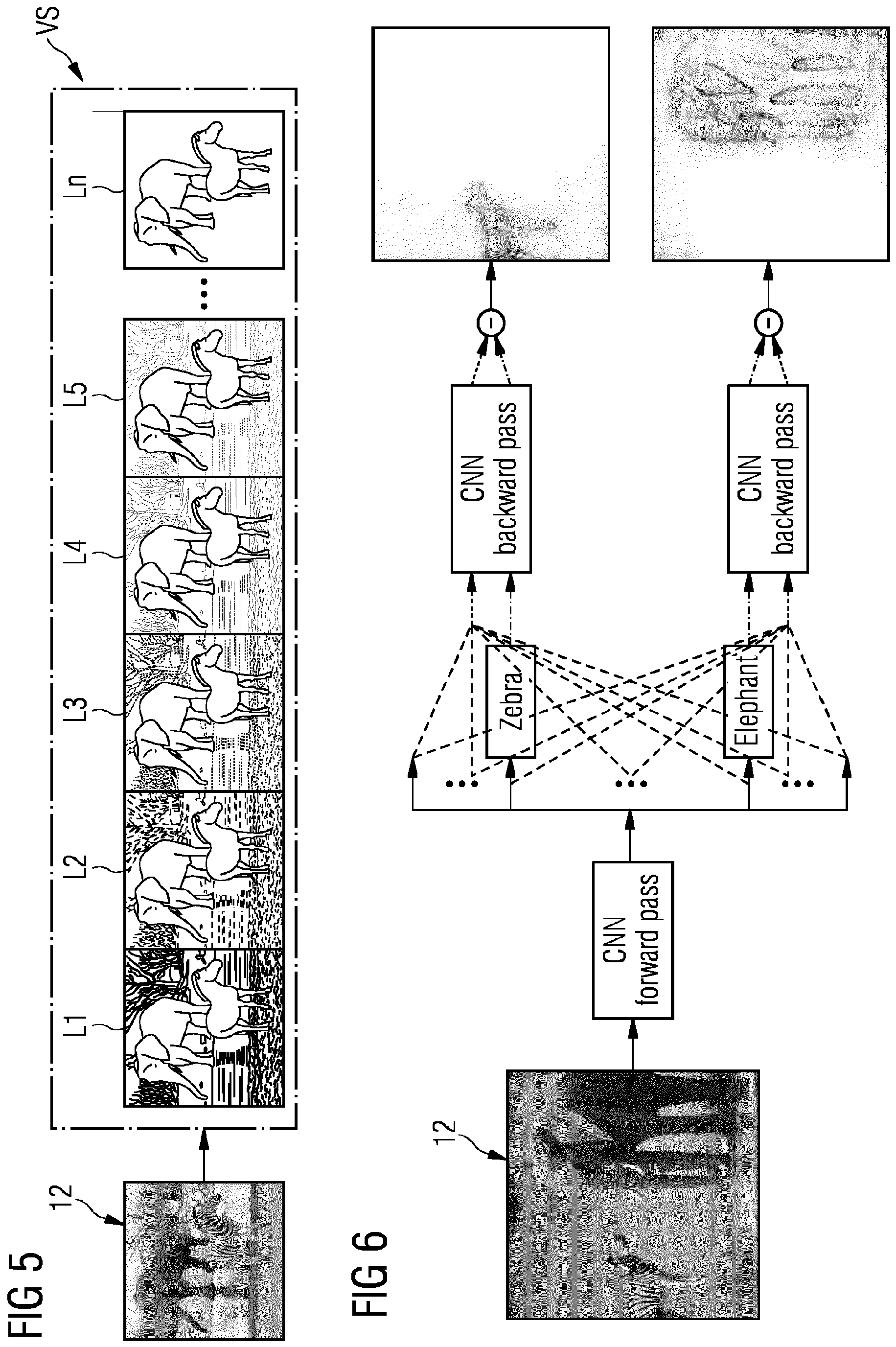 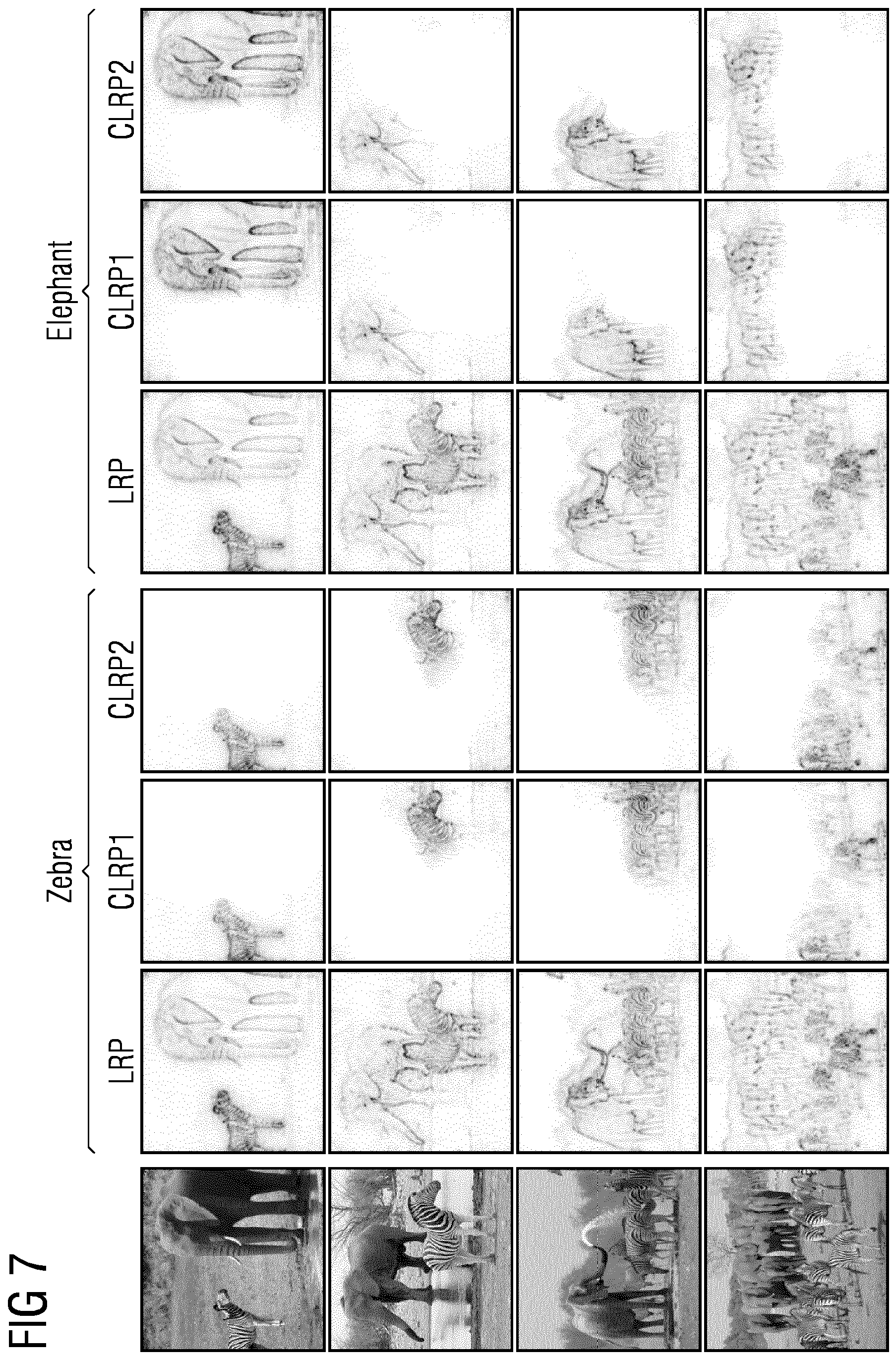 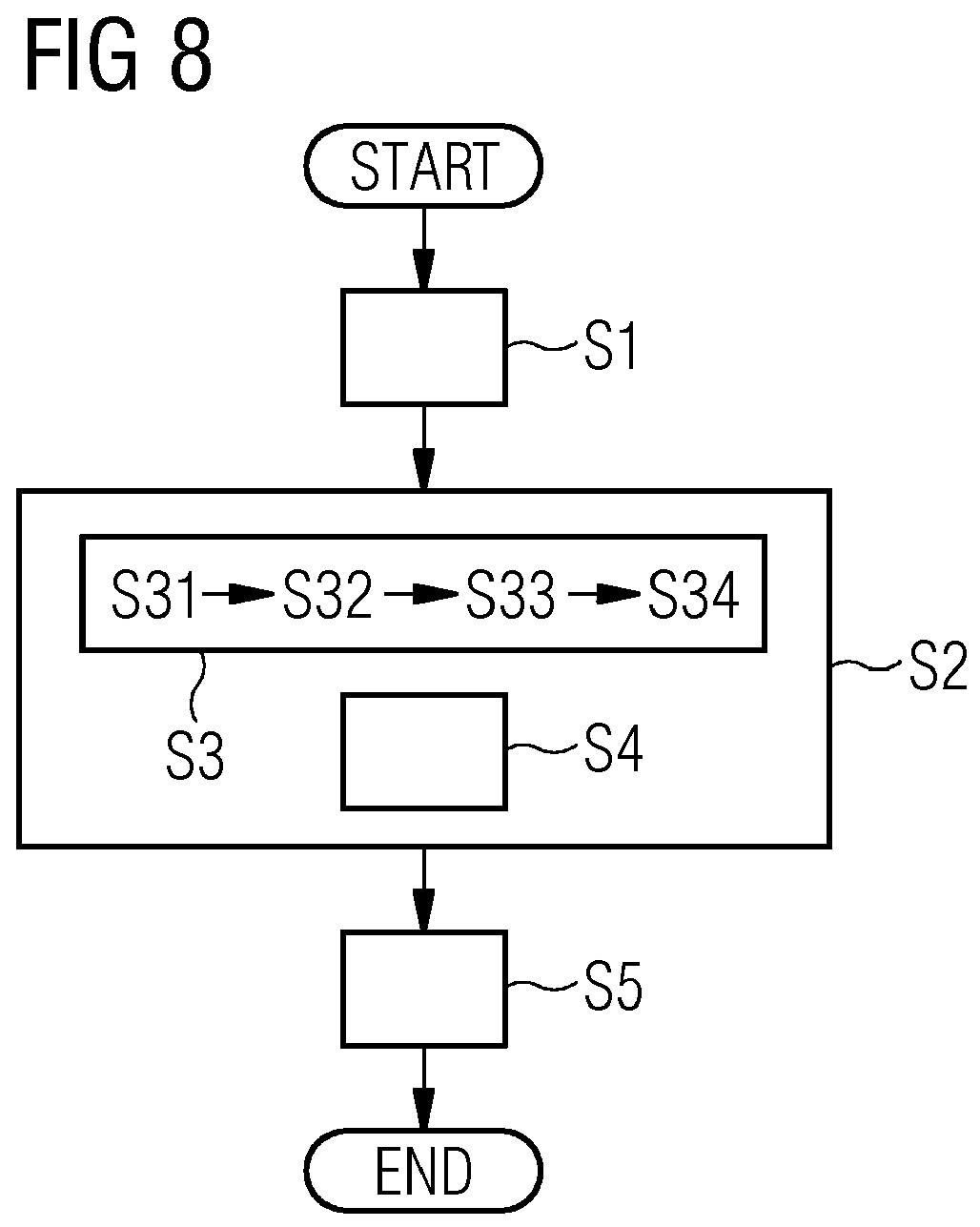 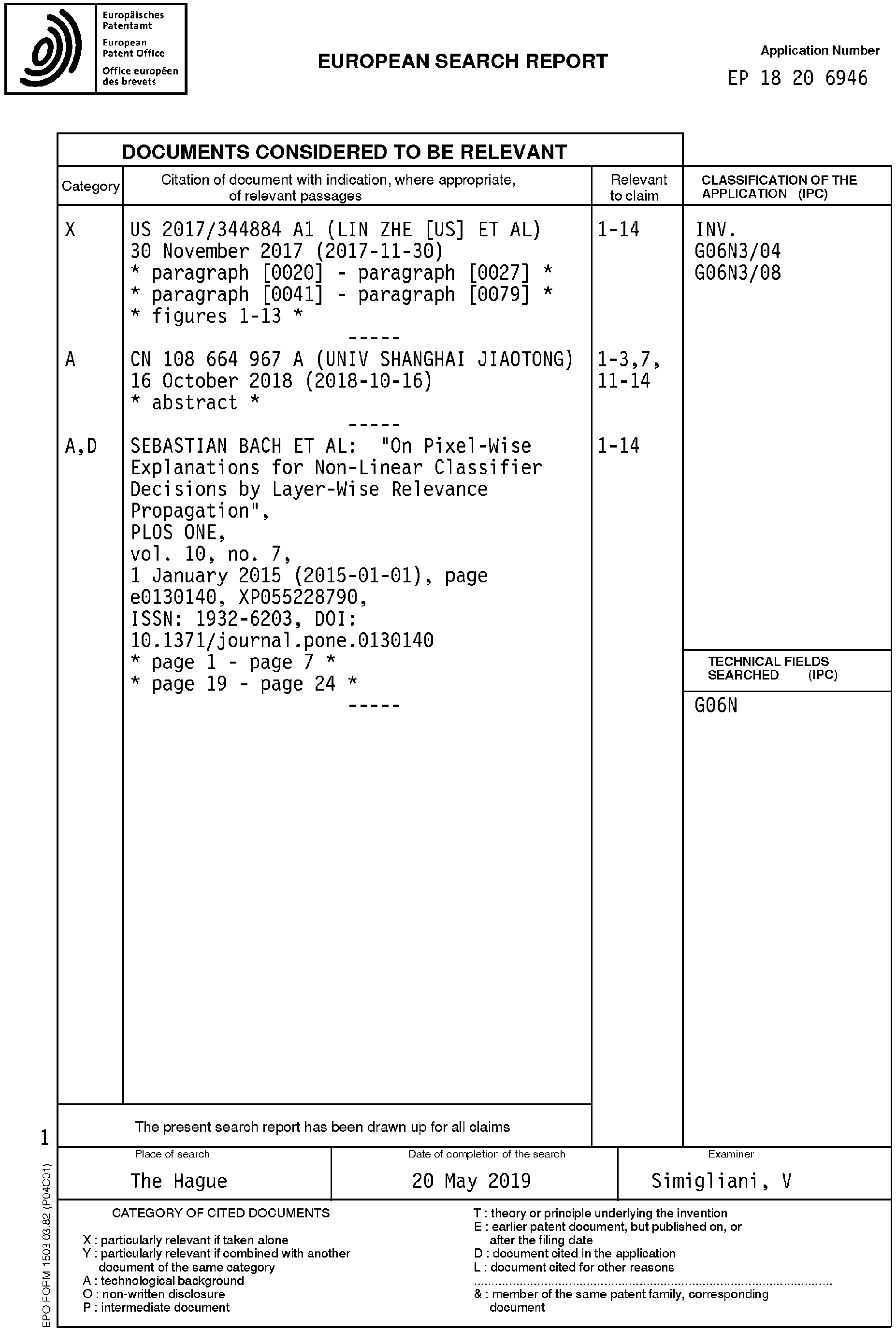 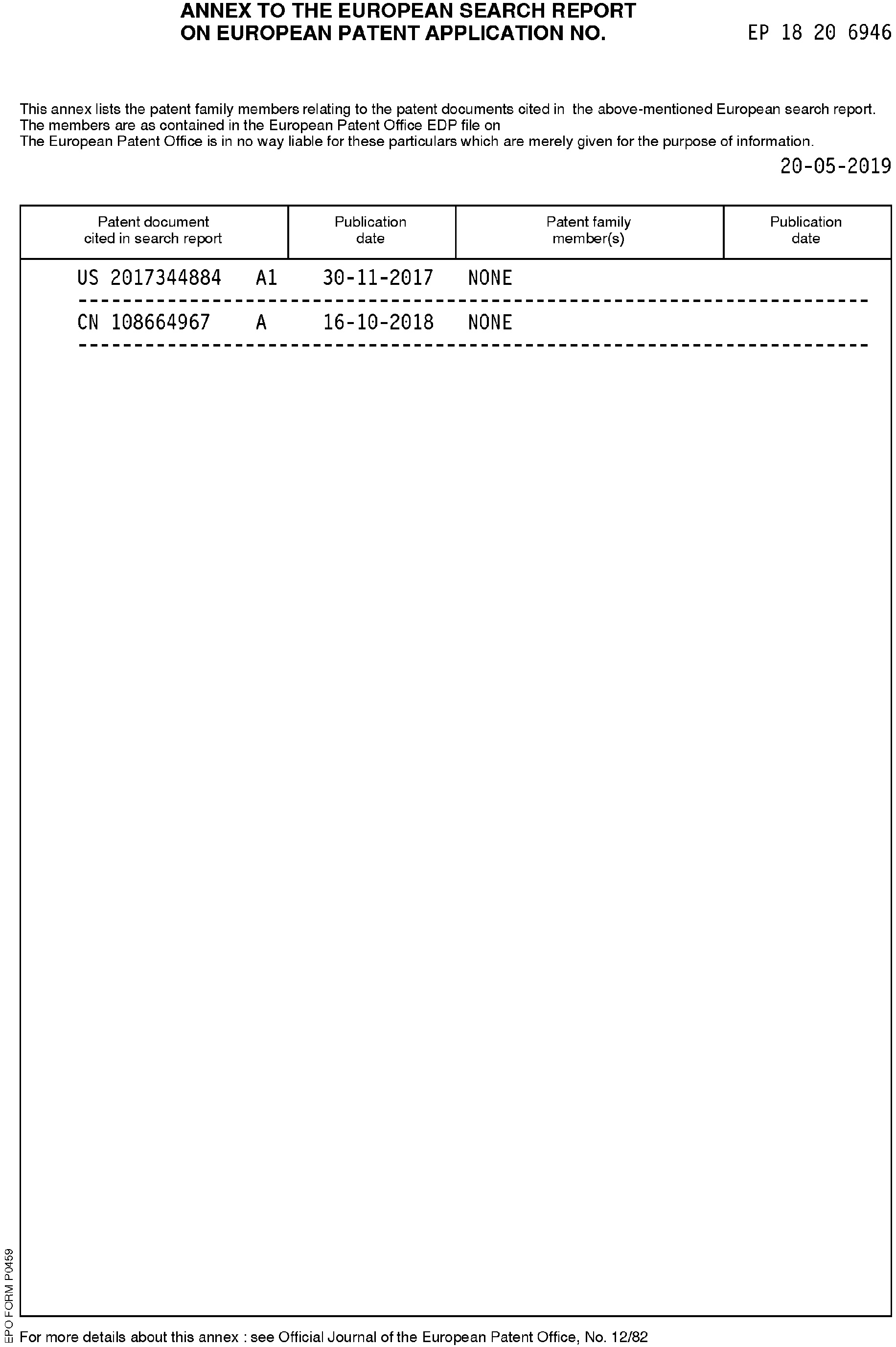