[0005] It is known that in retail distribution of beverages, businesses use apparatus for direct dispensing to the glass. Though some beverages, such as soft drinks or wine, do not require special arrangements for maintaining said plants, beer has certain organoleptic characteristics that generate formation of bacteria internally of the pipes.
[0006] In particular, beer passing through the tapping plant pipes that are not subject at each change of keg to correct treatment, will, due to this bacteria, take on an unpleasant taste and a smell that are immediately noted by even an inexpert consumer; furthermore the micro-fermentation makes the beer cloudy.
[0007] In the prior art, so far known and used in the sector, the beer kegs are connected to a distribution plant associated to CO2 gas cylinders loaded to about 50 bar via static pressure reducers and a water circuit for manual washing of the supply pipes which terminate with the classic bar-mounted dispensing taps.
[0008] The beer kegs are generally stored in store rooms where, very often, the plants are kept together with coolers for the purposes of refrigeration.
[0009] The environmental conditions of the rooms in which the beer kegs are positioned can change both over the short term and the long term and in the majority of cases it has been found that these rooms are not treated in respect of the variability of environmental conditions; this leads to faults which compromise the functioning of the dispensers.
[0010] These environmental conditions accelerate the formation of deposits internally of the piping of the tapping plant and already after a few days significant alterations are noted only by carrying out a visual inspection.
[0011] The technology used at present comprises circuits and devices that require the direct intervention of the manager to replace the keg, the washing of the pipes and the resetting of the dispenser circuit.
[0012] When the keg, as often happens, becomes empty when the demand for the product is at its highest, the manager, lacking time and not wanting to risk losing custom, is forced to avoid the manual plant washing procedure, and thus replaces the keg and continues dispensing.
[0013] In this matter, the prior art has already developed solutions that in a first case, described in document EP0269152, include the use of pneumatic activators and balanced pressure control between two kegs connected in parallel, enabling a semi-automatic switching by means of a pneumatic control from the empty keg, with injection of water into the circuit.
[0014] This first described system has shown itself to be very complex and laborious and, possibly due to purchasing and installation costs, has probably not rendered the hoped-for results, as today the system is not used and the project design has probably been abandoned due to excessive cost of the plant.
[0015] This system further required a nozzle plug on the keg that was designed and realised specifically, which had a further effect on costs of a product already excessively expensive.
[0016] A second document, illustrated in patent application No. WO2015/015275A1, describes a control system of the dispensing flow based on a compensator located between the cooler and the tap, with the main objective of controlling the dispensing pressure on tap based on the environmental parameters, thus excluding any automatic mechanism enabling the keg change combined with a washing of the plant.
[0017] To summarise, in the analysis of the issues described in the foregoing, some unresolved aspects are identified, which have a different but negative impact on two distinct categories of involved subjects: A third document DE 297 04 794 U1 discloses a plant for tapping beverages with means for automatic treatment of tapping pipes, whereby the plant comprises a pressurised beverage container, a tapping head installed on the beverage container, the tapping head is connected to a first pipe for pressurizing the container with CO2, to a second pipe through which the beverage is supplied to a tap and to a third pipe that is connected to a municipal water source which selectively determines injection of washing water into the plant. Further a pressure reducer in the first pipe is connected to the source of CO2 and a relief valve in the first pipe are foreseen. The flow of gas in the first pipe and the flow of water in the third pipe is selectively controlled on the basis of the dispensing conditions of the beverage or the washing conditions of the circuit by solenoid valves which are connected to a control logic.

[0018] The present invention discloses a plant for tapping beverages such as beer or the like that is able to obviate or at least drastically reduce the above-described drawbacks.
[0019] The invention in particular provides a plant for tapping beverages such as beer or the like, provided with semi-automatic washing means, during the keg-changing steps, able to increase the efficiency of the system, guaranteeing a higher quality of the product on tap and, consequently, an increase in the performance of the business which acquires value in terms of reliability and quality.
[0020] This is obtained with a plant for tapping beverages such as beer and the like of the above-described type and having the features described in the characterising part of the main claim.
[0021] The dependent claims of the present solution outline advantageous embodiments of the invention.
[0022] The main advantages of this solution relate to the fact that said tapping plant is able to guarantee no contact of the liquids with parts or organs which are not only the membranes of the solenoid valves which comply with the existing standards.
[0023] Further, the plant according to the invention is able to guarantee a time saving for the manager and a significant increase in the hygiene conditions of the plant itself.
[0024] Not least, the plant can significantly reduce maintenance operations and may even not necessarily require the replacement of the keg fittings, as the ones already present can be used.
[0025] The plant of the invention also guarantees a very much reduced energy consumption, around 3 Wh for an annual cost of about € 5.00.
[0026] Substantially, this plant, as well as the traditional hydraulic components, comprises four normally-closed solenoid valves which manage the flows of liquids and gas. The flows are conveyed by pressure difference between two points involved in the switching. The valves are activated/deactivated by a programmed logic control system.
[0027] The system is equipped with a keypad membrane associated to an alphanumeric display for example of the four row/twenty column type, more than sufficient to give indications on the status of the plant.
[0028] Further, a graphic display is positioned on the tapping column to enable the manager to monitor the situation.

ILLUSTRATION OF THE DRAWINGS

[0029] Further features and advantages of the invention will become apparent from reading the following description of an embodiment of the invention provided by way of non-limiting example with the aid of the figures illustrated in the appended tables of drawings, in which:

DESCRIPTION OF AN EMBODIMENT OF THE INVENTION

a) a pressurised container (11) containing a beverage;

b) a nozzle plug (13), insertable on said pressurised container (11), which is connected to a first pipe (14) for injection of gas originating from a source (15), to a second pipe (16) which dispenses the beverage towards a tap (17), and to a third pipe (18, 20) connected to a municipal water source (19) which selectively determines injection of washing water into the plant;

d) a relief valve (24) positioned on the first pipe (14) of said gas injected into said pressurised container (11); said plant further comprising at least a pressure sensor (21) positioned on a fourth pipe (22) connected to the first pipe (14) of said gas source (15), and in that said first and fourth pipes (14, 22), which connect said gas source (15) with said pressurised container (11), are intercepted by respective first (26), second (27) and third (28) solenoid valves which are electrically connected to a control logic (30), or to a power socket (60), for determining a charging and/or a discharging of the pressure of said gas on the basis of the dispensing conditions of the beverage or the washing conditions of the circuit, and in that said third pipe (18, 20) connected to a municipal water source (19) is intercepted by a fourth solenoid valve (29) in turn electrically connected to said control logic (30), or to a power socket (60) for enabling or halting an inflow of water into the pipes of the plant.

7. A process for cleaning a plant for tapping beverages according to any one of claims 1 to 6, characterised in that the empty status of beverage in said pressurised container (11), signalled by said liquid sensor (31), which intercepts passage thereof through the second pipe (16), determines an initiation of following operations:

• sending an empty status of beverage signal to a central control panel which activates a pre-washing status where the gas dispensing first valve (26) is closed, while said second and third valves (27, 28) are opened for discharge of the pressure in said pressurised container (11);

• activating the washing status when the pressure sensor (21) has detected a pressure lower than a pressure of the municipal water system, and during this step the excess gas second valve (27) closes at a pressure of around 0.5 bar and the gas injection third valve (28) also closes, while the water pipe fourth valve (29) is opened to enable water to flow into the plant and perform the washing cycle;

• opening of the tap (17) which still contains the last residues of beverage, on the basis of a length of the plant, before the water begins to flow;

• replacing the empty pressurised container (11) with a new and completely loaded container, leading to the restart of the cycle in a few moments;

• restarting the cycle so that after a residual quantity of water the beverage reaches the tap, the beverage being able to be dispensed through the second pipe (16) which connects the pressurised container (11) to the tap (17), which tap (17) is now fully washed.

8. A process according to claim 7, characterised in that the flow exiting from the third sleeve (52) of said nozzle plug (13) applicable on the keg (11) during normal dispensing operation is represented by the beverage which can flow out towards the tap (17) as the third washing pipe (18) is closed by the fourth valve (29), the pressure in the second sleeve (51) is zero and the gas coming from the gas source (15) enters through the first sleeve (50).
9. A process according to any one of claims 7 and 8, characterised in that on empty status of the pressurised container (11) being reached, the pipe (14) is opened by a command sent to the valves (28, 27) which valves (28, 27) reset the pressure at the third sleeve (52) to zero, and at this moment the valve (29) is opened for injection of water into the plant.
10. A process according to any one of claims 7 to 9, characterised in that during the washing step the beverage dispensing third sleeve (52) is at zero pressure while the second sleeve (51) for water inlet is at a higher pressure, the higher pressure being equal to the municipal water system pressure and in that such pressure difference enables the water to enter automatically into the second sleeve (51), to exit from the third sleeve (52), to transit in the pipe (16) and to exit through the tap (17), thus carrying out the washing of the plant. 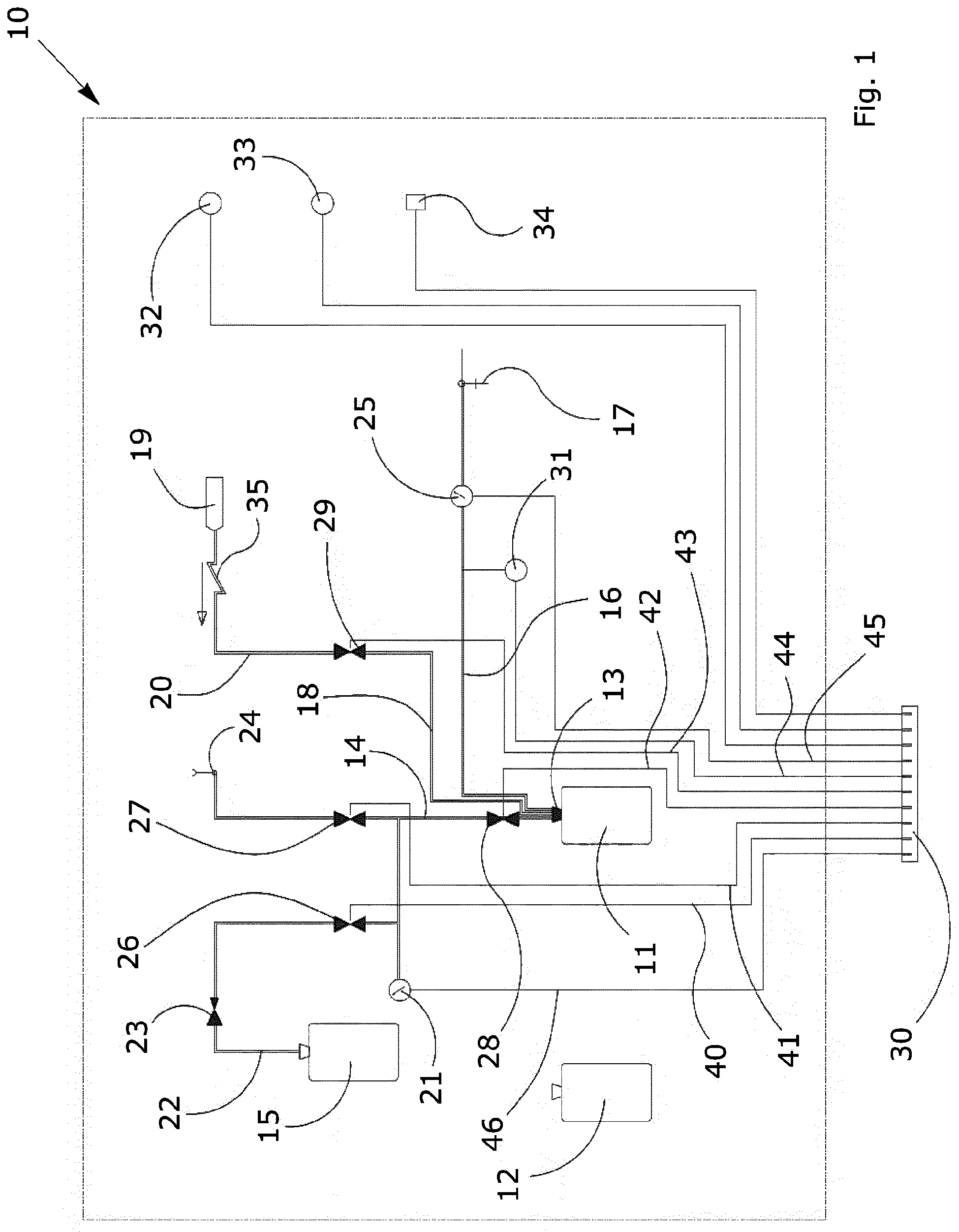 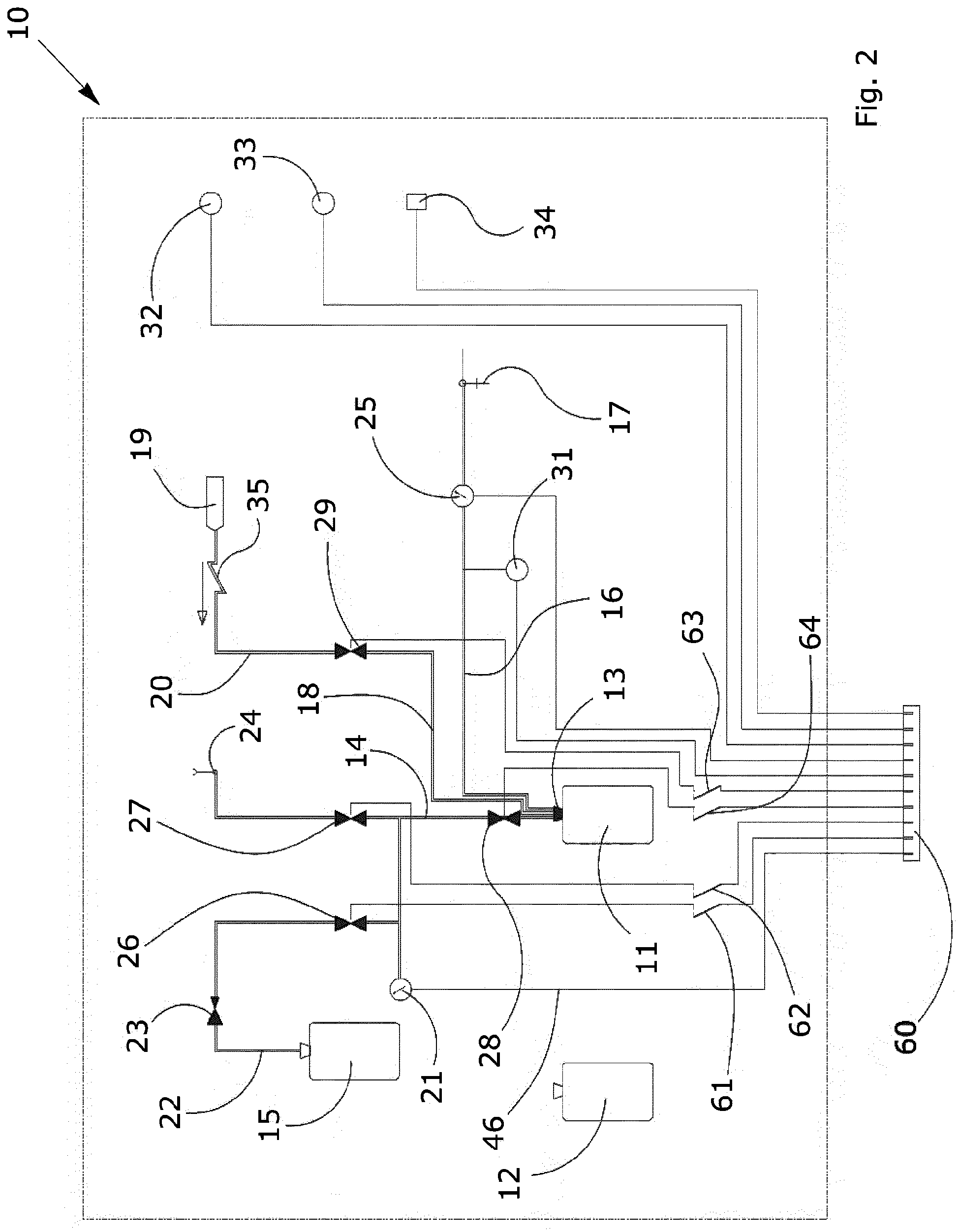 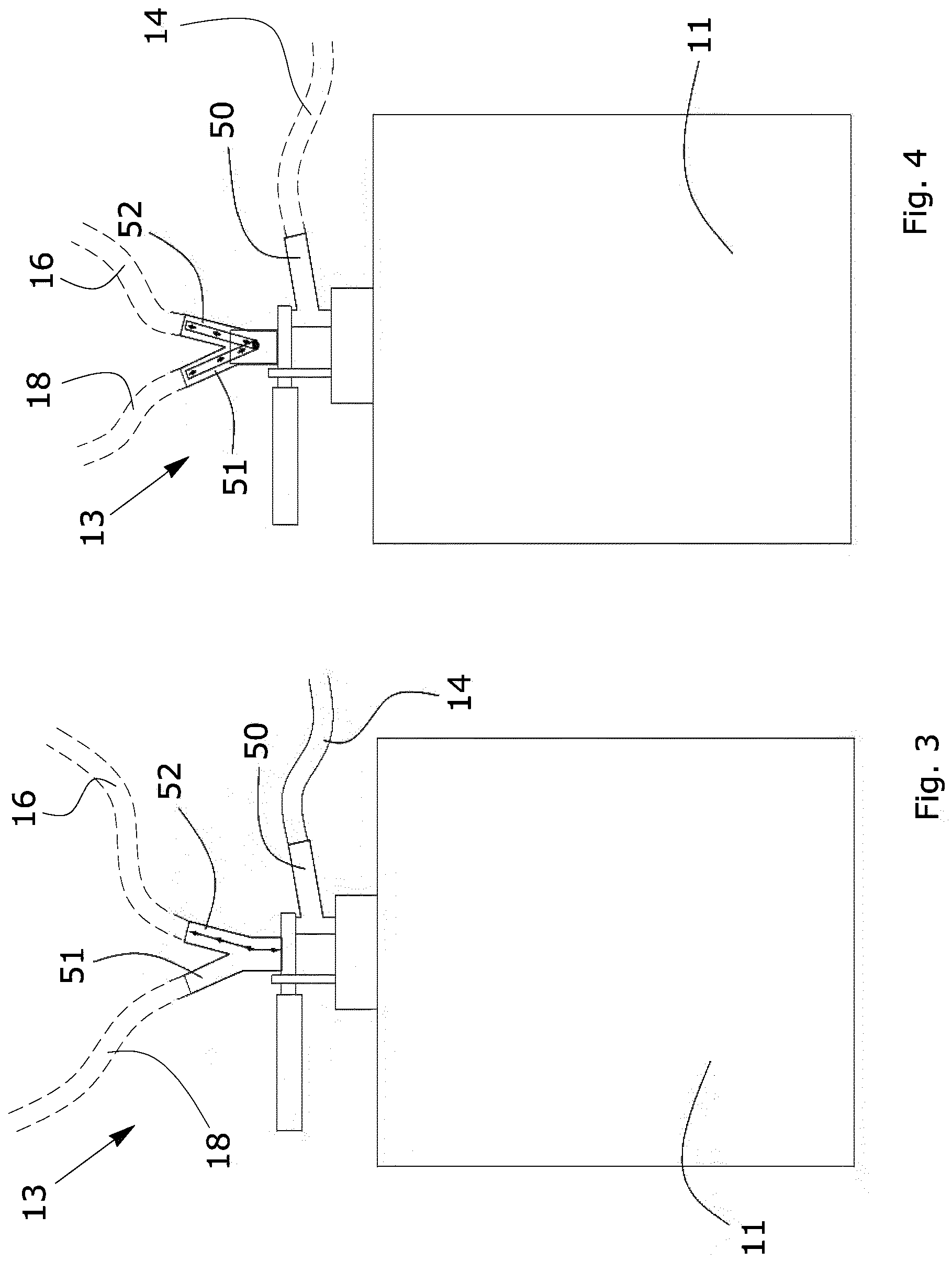