[0001] The present invention relates to insulating glass units (IGUs) having a low emissivity (low-E) coating stack for films that are suspended and tensioned in the IGUs, with particular emphasis upon both the quality of the infrared reflecting layer formed in the coating stack and the resistance of the low-E coating stack to cracking or crazing.

[0002] U.S. Patent No. 4,335,166 to Lizardo et al. describes an insulating glass unit (IGU) comprising a frame with spacers that support a heat-shrinkable plastic sheet between a pair of spaced apart, but substantially parallel, glass panes to provide an integral unit. Heating the assembled unit causes the plastic sheet to shrink so as to become taut and wrinkle-free. The plastic sheet may be a polyethylene terephthalate (PET) film that can be coated on one or both sides with an infrared reflective material.
[0003] U.S. Patent No. 4,799,745 to Meyer et al. describes visually transparent, infrared (IR) reflecting composite films useful in IGUs like that described in the aforementioned Lizardo patent. A transparent support can be selected from among rigid and non-rigid but minimally stretchable solids, including glass and various polymers (including PET). A layer stack of 5 or 7 alternating dielectric and metal layers is sputter-deposited onto one surface of the support. The dielectric layers can be composed of an inorganic metal or semimetal oxide or salt having a refractive index between 1.75 and 2.25, such as indium oxide, tin oxide, titanium dioxide, silicon dioxide, bismuth oxide, chromium oxide, zinc sulfide, magnesium fluoride, or mixtures thereof. Polymer dielectrics are also disclosed. The metal layers can be composed of silver, gold, platinum, palladium, aluminum, copper, nickel, or alloys thereof (e.g., silver alloyed with up to 25% gold). Spacer dielectric layers between the two or three metal layers have thicknesses between 40-200 nm, preferably 50-110 nm, and especially 70-100 nm. Boundary dielectric layers on the outside of the stack have thicknesses between 20-150 nm, preferably 25-90 nm, and especially 30-70 nm. (These thicknesses are for the inorganic dielectric materials. Polymer dielectric layers with their lower refractive index are disclosed to be somewhat thicker.) The metal layers have a combined total thickness between 12-80 nm, with each metal layer having a thickness between 4-40 nm, preferably 4-17 nm, especially 5-13 nm, with 10-12 nm each indicated for two-metal-layer stacks and 5-10 nm each for three-metal-layer stacks.
[0004] A variety of window assemblies have a film coating laminated to or deposited directly onto one or more glass substrates, rather than suspend a sheet in a space between pairs of glass panes.
[0005] U.S. Patent No. 6,503,636 to Le Masson et al. describes a transparent polymer (e.g. polyester) substrate that is provided with a stack of layers including at least one silver layer reflecting thermal radiation. The stack is constructed to prevent stresses from causing it to delaminate or curl up. In particular, the presence of an AlN layer under tensile stress compensates for the compressive stresses in a less than 15nm thick ZnO layer contiguous with the silver layer, so that the film will lie flat when laminated.
[0006] U.S. Reissued Patent RE 37,446 and U.S. Patent No. 5,532,062, both to Miyazaki et al., describe low emissivity films comprising a glass substrate coated with a stack of alternating oxide and metallic films. The oxide film furthest from the substrate has an internal stress not more than 1.1 × 1010 dyne/cm2 in order to prevent exfoliation of that surface film from the underlying metal layer due to moisture damage, with consequent turbidity or haze. In order to achieve this internal stress reduction, the 20-70 nm thick, outermost ZnO film is doped with at least one of Si, B, Ti, Mg, Cr, Sn or Ga in a total of up to 10 atomic %, and preferably 2 to 6 atomic %, with respect to the total quantity including Zn. The other oxide layers closer to the substrate may be selected from ZnO, SnO2, ZnO-SnO2 multilayers, or a doped ZnO like the outermost oxide layer. At least one of the metal film layers may be an IR reflecting layer composed of Ag, or an alloy whose major component is Ag including at least one of Au, Cu and Pd.
[0007] Zinc oxide is a well-known seed layer for the growth of silver. The thicker the ZnO seed layer, the better the epitaxial growth of silver on the seed. This results in higher quality silver and consequently a lower emissivity for a given area-specific amount of silver. However, in contexts where a film layer is suspended in tension between windowpanes rather than directly coated onto a windowpane, the brittleness of the highly crystalline zinc oxide becomes a problem. Shrinking or tensioning of the film tends to cause zinc oxide layers to experience crazing, forming a network of myriad visible cracks. Too much shrinking (≥≈1.0%) results in cracked film. However, too little shrinking (≤0.5%) results in sagging or wrinkled film that is also visible as image distortions reflected from the film within the window. The distortion from low film tension is exaggerated when the IGU is exposed to elevated ambient temperatures since the thermal expansion coefficient of the film is higher than that of the glass panes.
[0008] Traditionally this has not been a problem because In2O3 has been used as the seed layer material, since In2O3 has a more amorphous or glassy structure in comparison and is therefore less subject to crazing. However, In2O3 is not as good a seed for the deposition of high quality (lower emissivity) silver.

[0009] An IGU is provided wherein the suspended and tensioned coated film has a ZnO seed layer that is at most 15nm thick. The thinner ZnO is better able to withstand the strain of a tensioned film without crazing, while still able to serve as an adequate seed for high quality silver deposition.

Figs. 1A and 1B are perspective views of corner portions of two insulating glass unit (IGU) embodiments in accord with the present invention installed within a frame. The IGU in Fig. 1A has a single suspended film, while the IGU in Fig. 1b is provided with two suspended films.

Fig. 3 is a side sectional view of a first coated film embodiment in accord with the present invention and usable in the IGU embodiments of Figs. 1A and 1B.

Figs. 4A through 4D are side sectional views corresponding to Fig. 2 that illustrate the steps of assembling an IGU with suspended tensioned film.

Figs. 5 and 6 are side sectional views of second and third coated film embodiments in accord with the present invention.

1. A visually transparent, infrared-reflecting composite film, comprising:
a polymer substrate having a series of layers coated onto at least one surface thereof, the coating comprising:

a first layer immediately adjacent to the polymer substrate, wherein the first layer is an amorphous dielectric, such as indium oxide, and has a thickness of 20 to 80 nm, 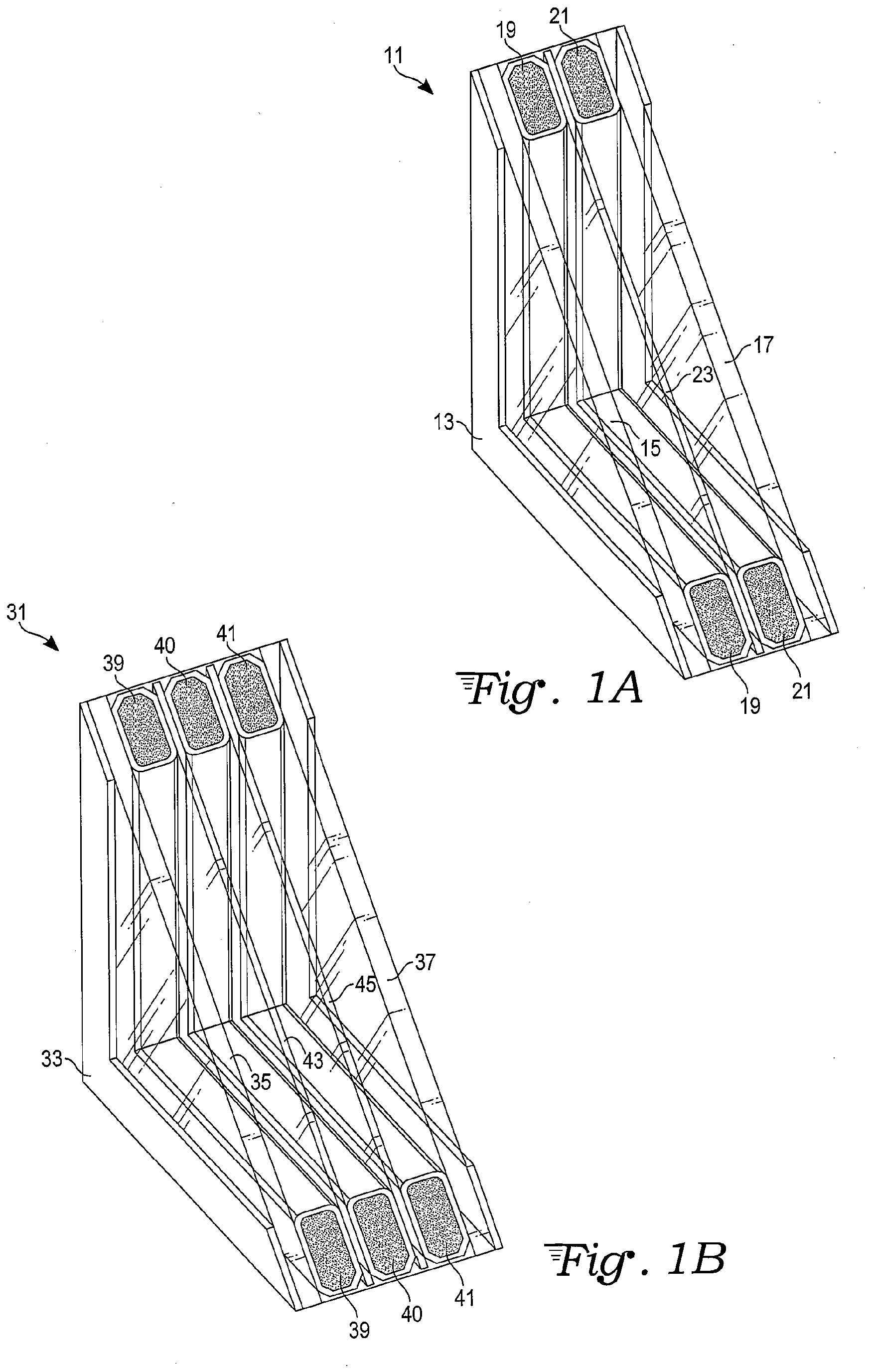 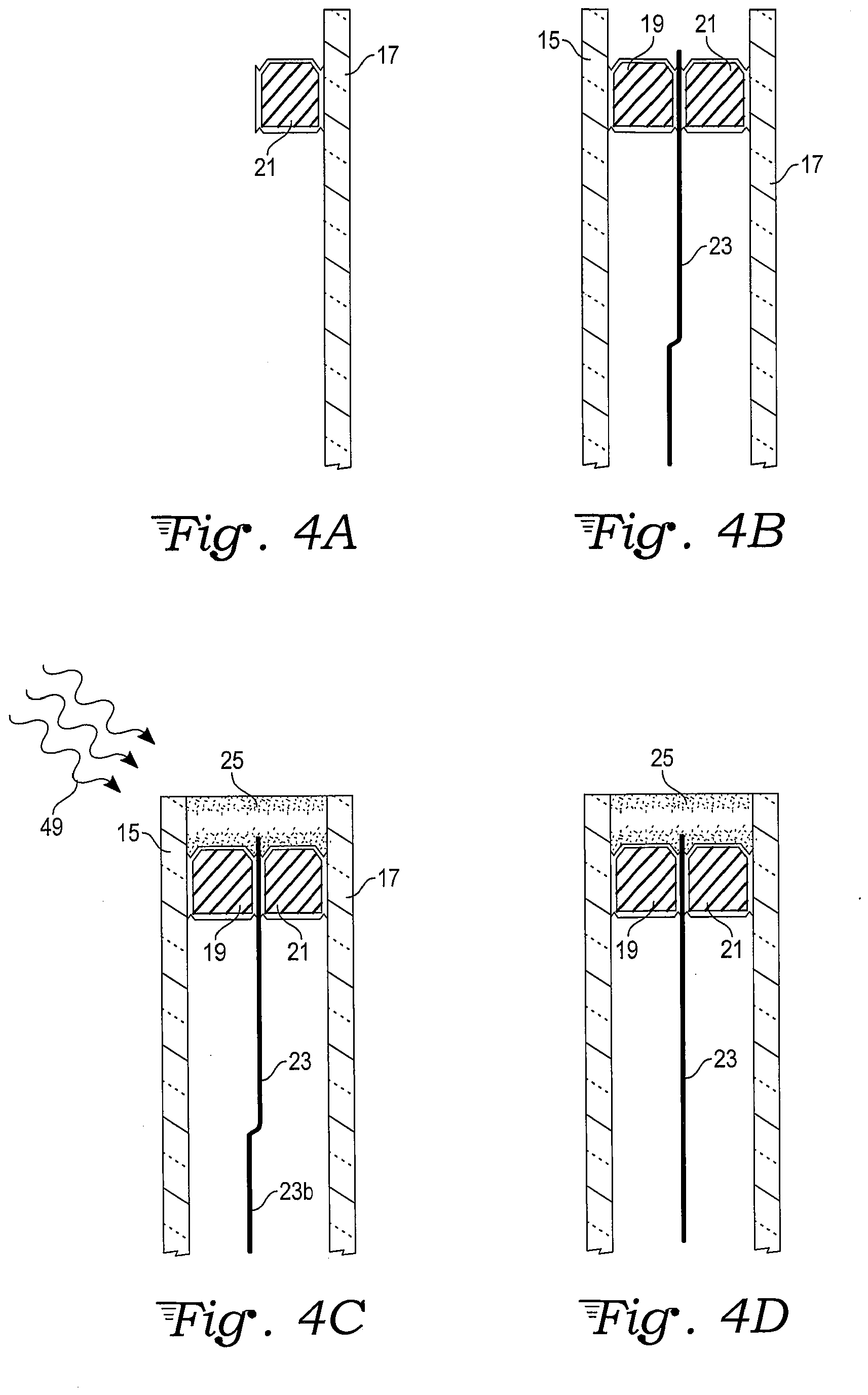 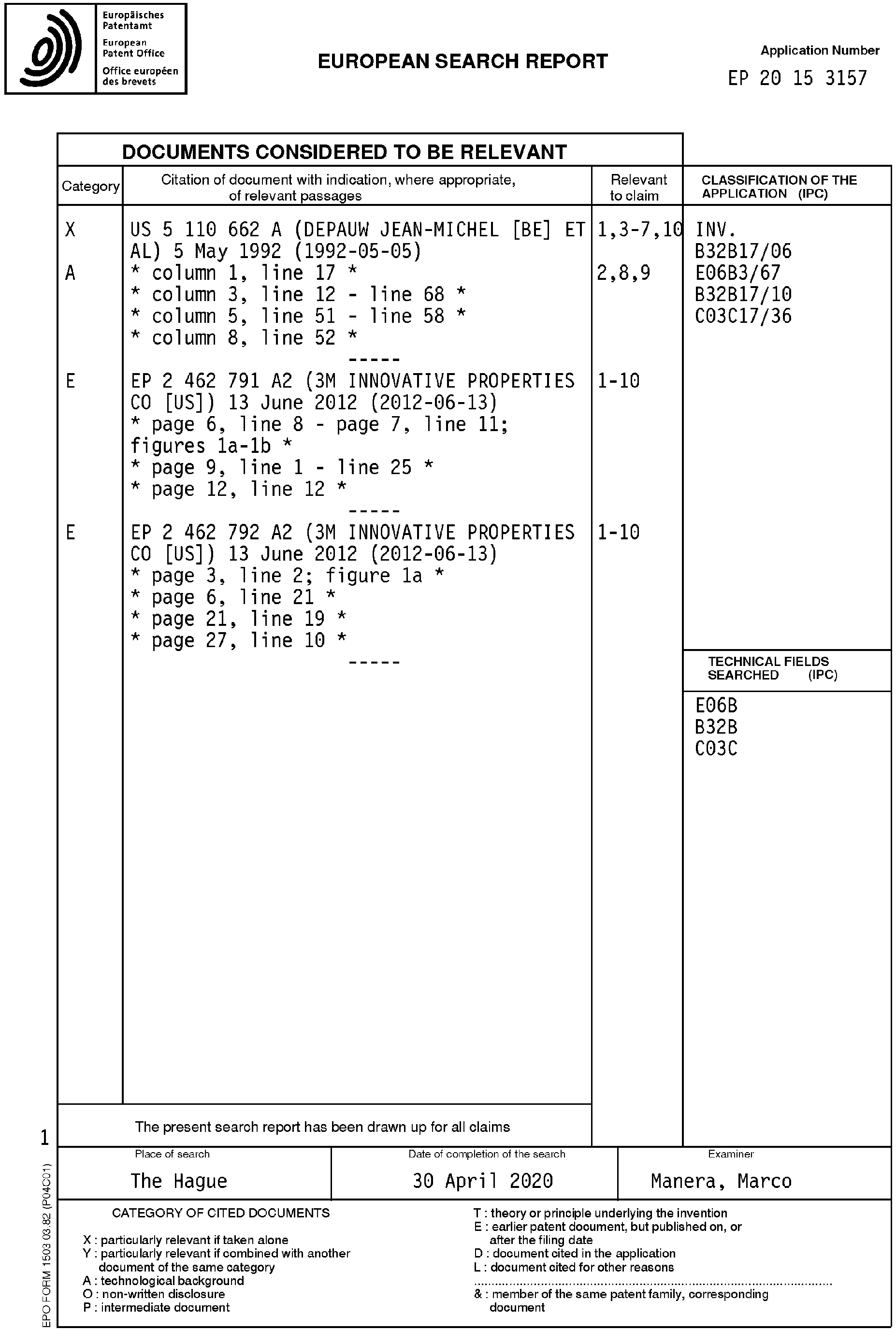 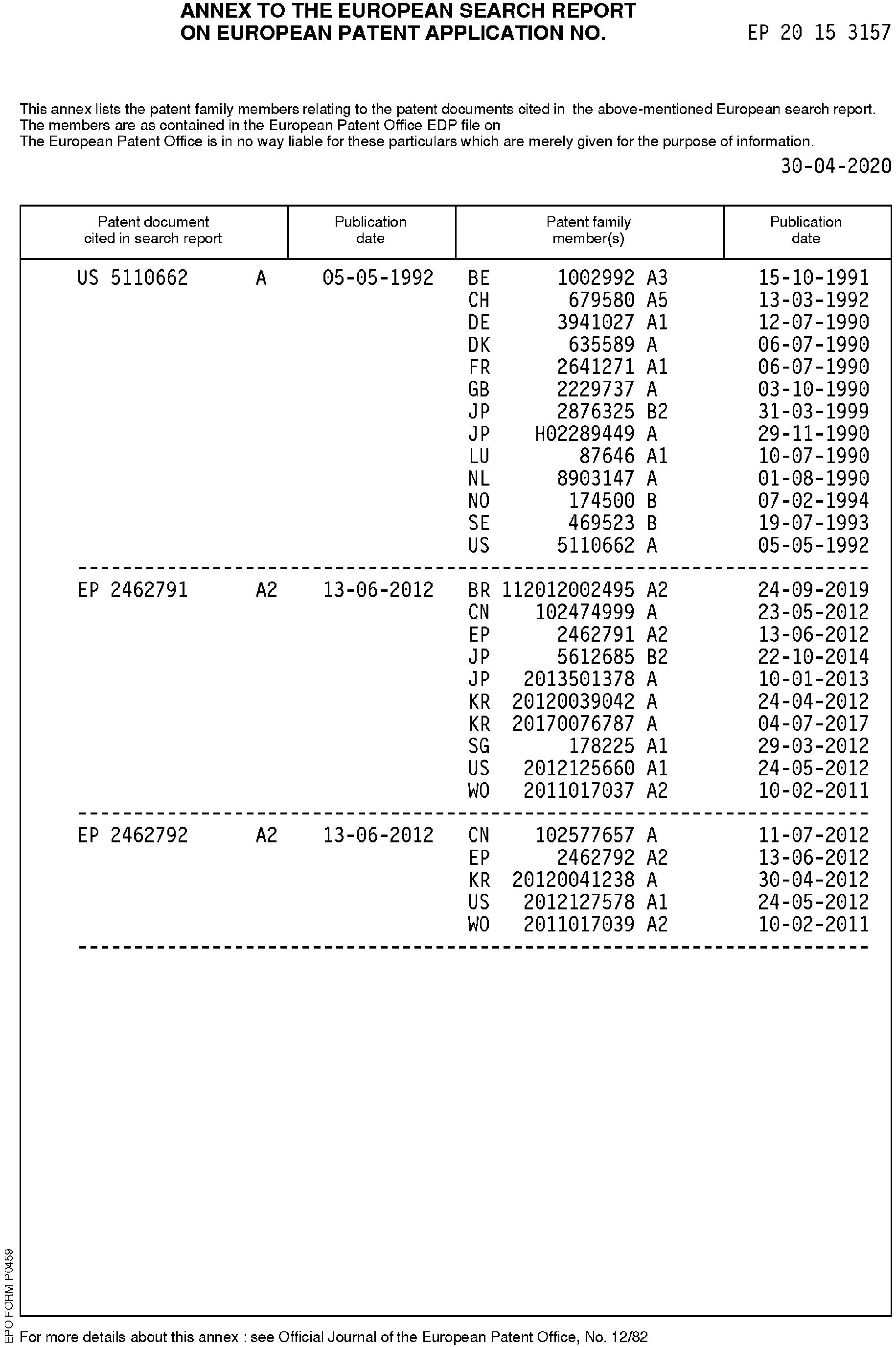