[0001] In the field of plastic film, a very well-known type of film is the so called "cling film" or "kitchen wrap". This film is used by the layman in order to protect ready food from spoilage in everyday kitchen use. Well known films of this type are the Saranex® film in the US and similar films in Europe, Australia and Japan.
[0002] This kind of films in order to perform must combine a certain range of properties.
[0003] In the today state of the art, two basic films are used for this application. First one is based on LLDPE (linear low-density polyethylene) while the second is based on PVDC (polyvinylidene chloride). Both have certain advantages and disadvantages.
[0004] LLDPE films are economical to manufacture, have enough cling properties and are environmentally friendly. But on the other hand, they do not have odor barrier properties and they are notoriously known for being difficult to cut and difficult to unwind. This type of film is the most common in Europe.
[0005] PVDC films are very difficult to produce and are expensive and considered as non-environmentally friendly (due to chlorine presence in PVDC). They have excellent odor barrier and acceptable cling properties.
[0006] Sometimes, instead of PVDC a PVC film is used. This solution is not considered viable in many markets due to the phthalate plasticizers used in the production process of soft PVC. In general, the plasticizer migration from the film to the foods and the chlorine content of PVC create a non-environmentally friendly image of the material.
[0007] In general, all the above films are packed in boxes before storage at the supermarket. These boxes comprise a cutting unit that allows the user to cut a piece of the film prior to use. This is the case as the films used in the market are quite difficult to cut or tear. The cutting unit may pose safety problems to the user (e.g. elderly, children) and is also cost disadvantageous.
[0008] There are many efforts in the prior art to develop cling films of improved functionality and properties. For example, application US 9,132,956 B2 teaches the use of a cling wrap which is produced by a specialized production process. The film is packed in a box and cut by a "cutting strip" used as cutting unit.
[0009] There is a lot of prior art and patent literature how the box design and/or cutting mechanism can be more efficient. See for example DE 20 2004 014 317 U1 or CN 101024460 A. However, until now there has been no teaching in the prior art how to avoid the cutting unit. Thereby improving ease of use and minimizing the risk of injury.

[0013] Figure 1 illustrates a pattern of a box according to the present invention.

Detailed description of the invention:

[0046] The cling film of the invention comprises at least a polyolefin and at least a polymer with Youngs modulus of at least 500.
[0047] Examples of the polyolefin is low density polyethylene (LDPE), linear low density polyethylene (LLDPE), metallocene LLDPE, polyolefin plastomer, ethylene vinyl acetate(EVA), ethylene methyl acrylate(EMA), ethylene butyl acrylate(EBA), polypropylene(PP), cyclic olefin copolymer and others.
[0048] Examples of the polymer with Youngs modulus of more than 500 include polyamide, polyester, polypropylene, polylactide (PLA), ethylene vinyl alcohol (EVOH) and others.
[0049] Youngs modulus is defined as per ISO 527 and is a measure of the stiffness of the material.
[0050] The film structure in general terms could be of below options:

[0070] In the tie layers typical adhesive resins like maleic anhydride modified polyolefins may be used. Typical examples are BYNEL® from Dupont and OREVAC® from Arkema.
[0071] In another preferred embodiment the tie layers comprise low density polyethylene, linear low-density polyethylene, ethylene ester copolymers such as EVA, EMA or EBA and other polyolefin homopolymers, copolymers and terpolymers.
[0072] In another preferred embodiment of the invention, polyamide could be used as tie layer.
In that case a tie layer is needed between polyamide and polyolefins.

[0073] In the abuse layers the use of polyolefin homopolymers and/or copolymers is preferred. Polyamide, polystyrene and polyester is also possible.

[0074] In the optional barrier layer(s) materials like EVOH and polyamide are preferred. The functionality of this layer is to not allow oxygen ingress into the pack, therefore protecting the quality of the packed unit(eg food).

[0075] The preferred production method for the film is the hot blown film method, which is well known in the art. Other methods like extrusion through flat cast die are also possible.
[0076] Additives well known in the art may be used in one or more layers of the present invention. Slip additives, antiblock additives, antifog, polymer processing aids may be used if pertinent.
[0077] In order to increase the mechanical properties, the film may be crosslinked with one of the following methods E-beam radiation, gamma radiation, moisture crosslinking using silane grafting compounds, peroxide crosslinking.
[0078] The film may be in tubular form or sealed at the edges or single sheet configuration. Centerfold configuration is also possible.

[0085] A 5-layer film is produced in a commercial hot blown film line with the following recipe:

[0088] The slip antiblock masterbatch comprises 5% of erucamide, 10% silica and the balance LDPE.

TESTING THE MATERIAL AS KITCHEN WRAP

[0091] The applicability of the invention as cling film (kitchen wrap) was tested by a panel of five persons. The test was done as follows.
[0092] 20 reels (30 meter each) of the film of the example 1 were put in the box.
[0093] As comparative example, 20 cling film reels from the market were purchased packed in the original box packing (including a cutting unit).
[0094] The practicality of the films was compared.
[0095] The reels of the films of the invention were removed from the box by opening the flip-flap at the side. Then the film was manually cut by the user without using any cutting unit.
[0096] In contrast to this, for the commercial films the box there are sold in was opened and the films were unrolled from the original box and cut using the cutting unit implemented in said box. When the commercial film was just removed from the box(without any cutting) and the user tried to cut it manually, it was not easy to tear and the panel members rejected it as not practical.
[0097] All five of the panel members concluded that the invention concept is more practical and user-friendly than the commercial (comparative) sample. Further the risk of injury is minimized. 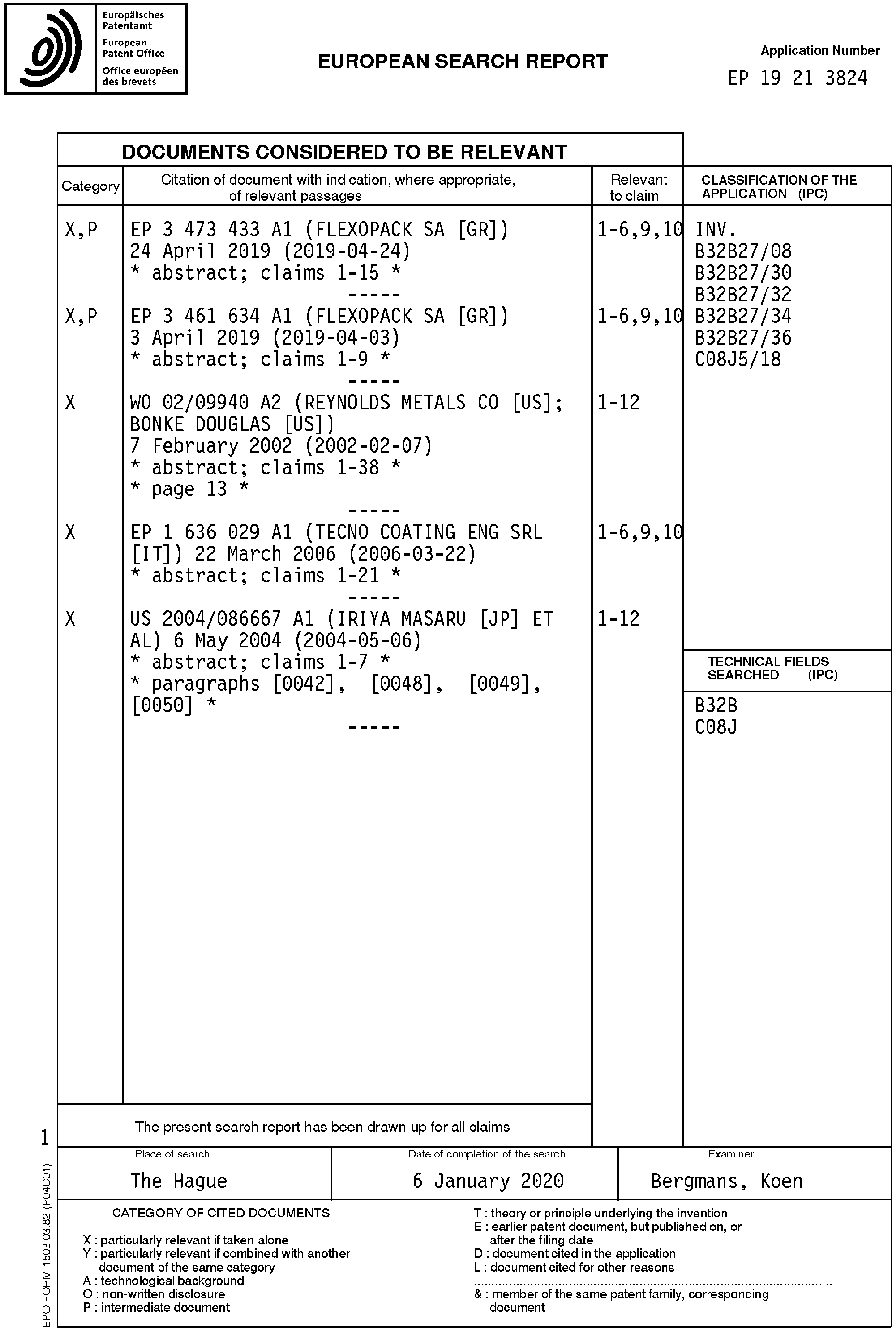 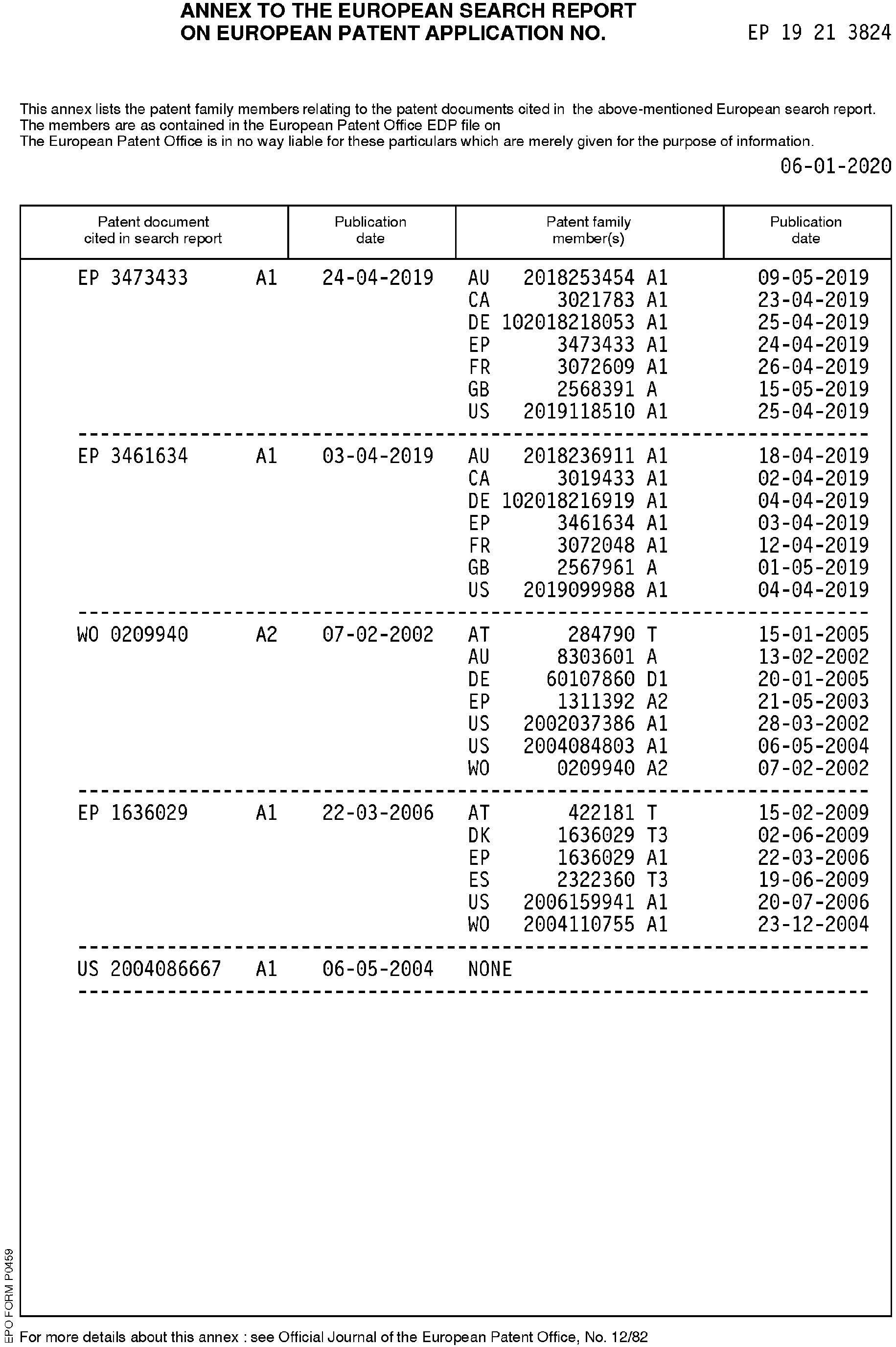