Fig. 1 is an isometric view of a tearaway sheath tube and hub of the present invention;

Fig. 2 is an isometric view of the present invention's sheath hub with integrated hemostasis valve disposed therewithin and having retention cap members affixed to the hub;

Figs. 3 and 4 are cross section views of the sheath hub and cap members of Fig. 2 with the integrated hemostasis valve removed and with the valve in position therein, respectively;

Figs. 5 to 7 are, respectively, an isometric view, a first elevation view (in cross-section) and a second elevation view rotated 90° from the first along the longitudinal axis, of the valve of the present invention; and

Fig. 8 is an isometric view of another valve embodiment wherein the tensioners are tubular.

a valve body (300) and a valve housing (222) defined in a medical device, wherein the valve housing includes an interior wall surface (230), and

a proximal cylindrical end (312), a distal portion (322) and a central passage (304) extending from the proximal end to the distal end,

the valve body (300) further including a pair of tensioners (340) integrally formed therewith and projecting radially outwardly from side sections (328) of the respective distally extending opposed flaps (324) to exterior tensioner faces (342) for engaging an interior wall (230) of the valve housing (222),

whereby the tensioners (340) bear against the interior valve housing wall (230) to press the distally extending flaps (324) toward and against each other at the distal tip (328) to close the slit (334) either completely in a sealing fashion or sealingly against outer surfaces of another medical device inserted through the valve's central passage (304) and slit (334).

8. The tearaway sheath of claim 7, further including a retention cap (210) affixed to the sheath hub (200) at a proximal end thereof, the retention cap having two half members (212) respectively affixed to two hub half portions (202) and having an interface gap between the two half members (212).
9. The tearaway sheath of claim 7, wherein the valve cylindrical wall (302) comprises a proximal portion (312), and the valve body (300) further includes a radially outwardly extending annular ring portion (314) intermediate the proximal portion and the distally extending opposed flaps (324) and is seated in the valve housing (222) and forms a seal traversing the valve housing around the valve body (300).
10. The tearaway sheath of claim 7, wherein the valve body (300) includes V-grooves (332) extending longitudinally along interior valve surfaces. 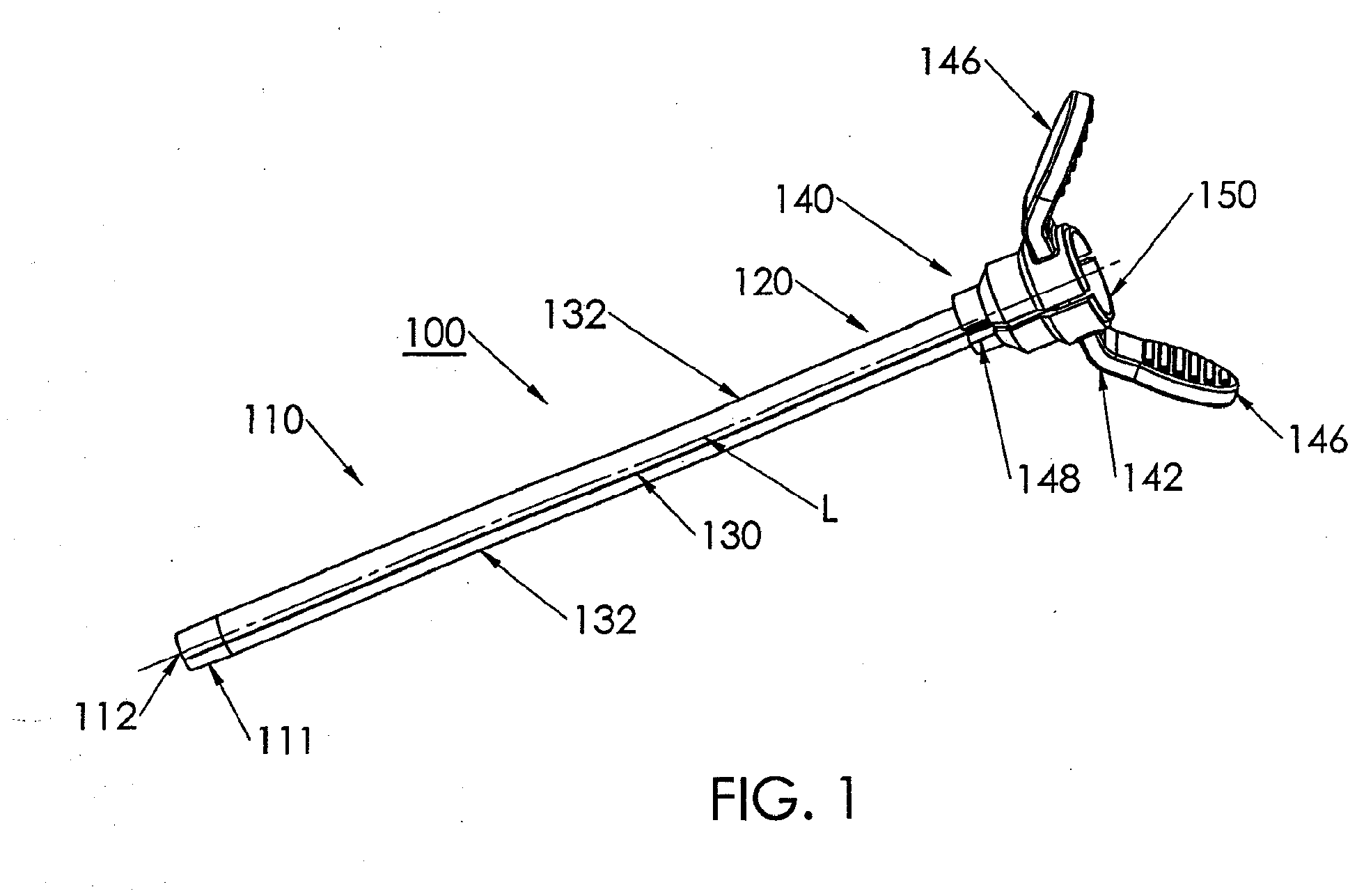 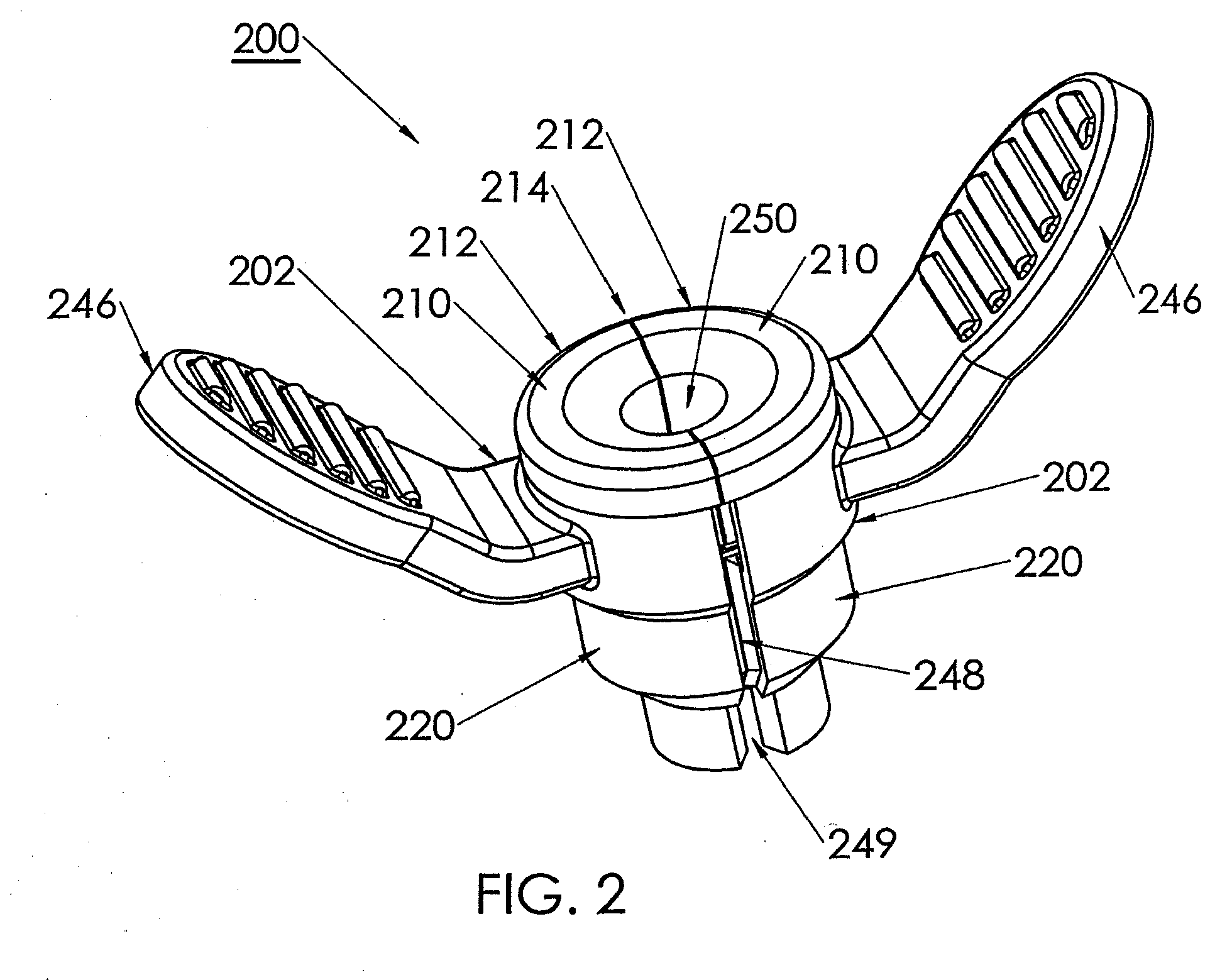 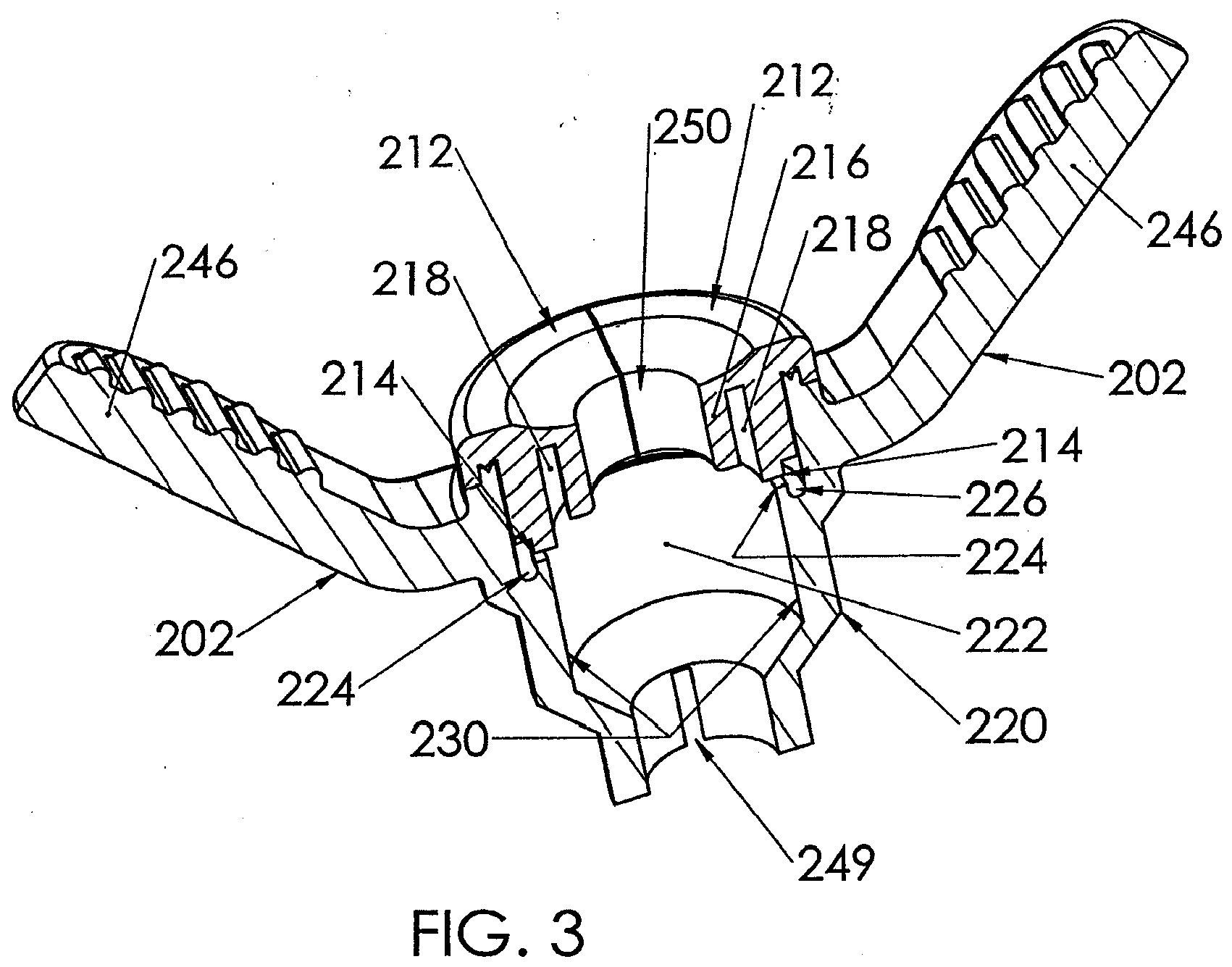 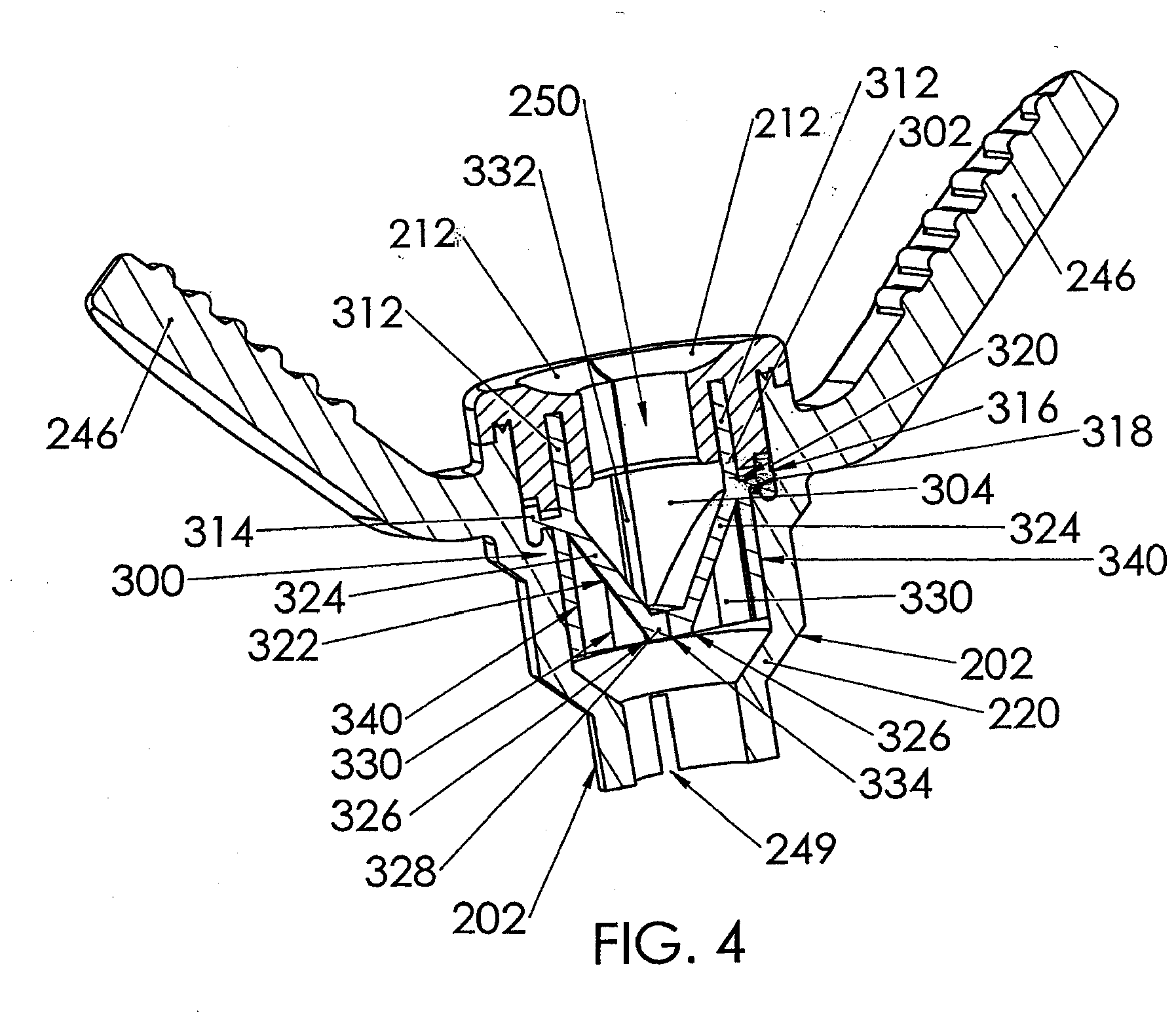 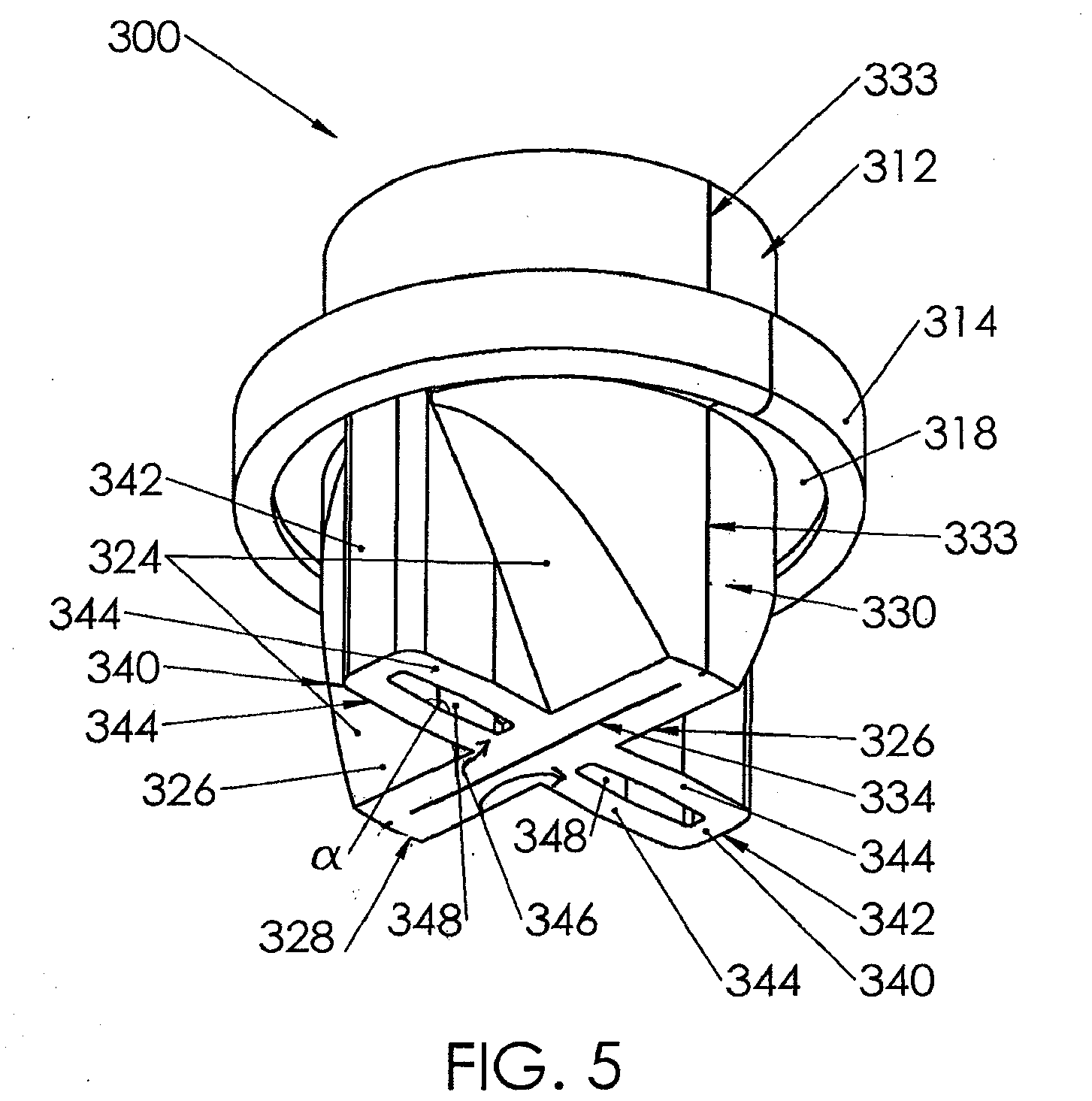 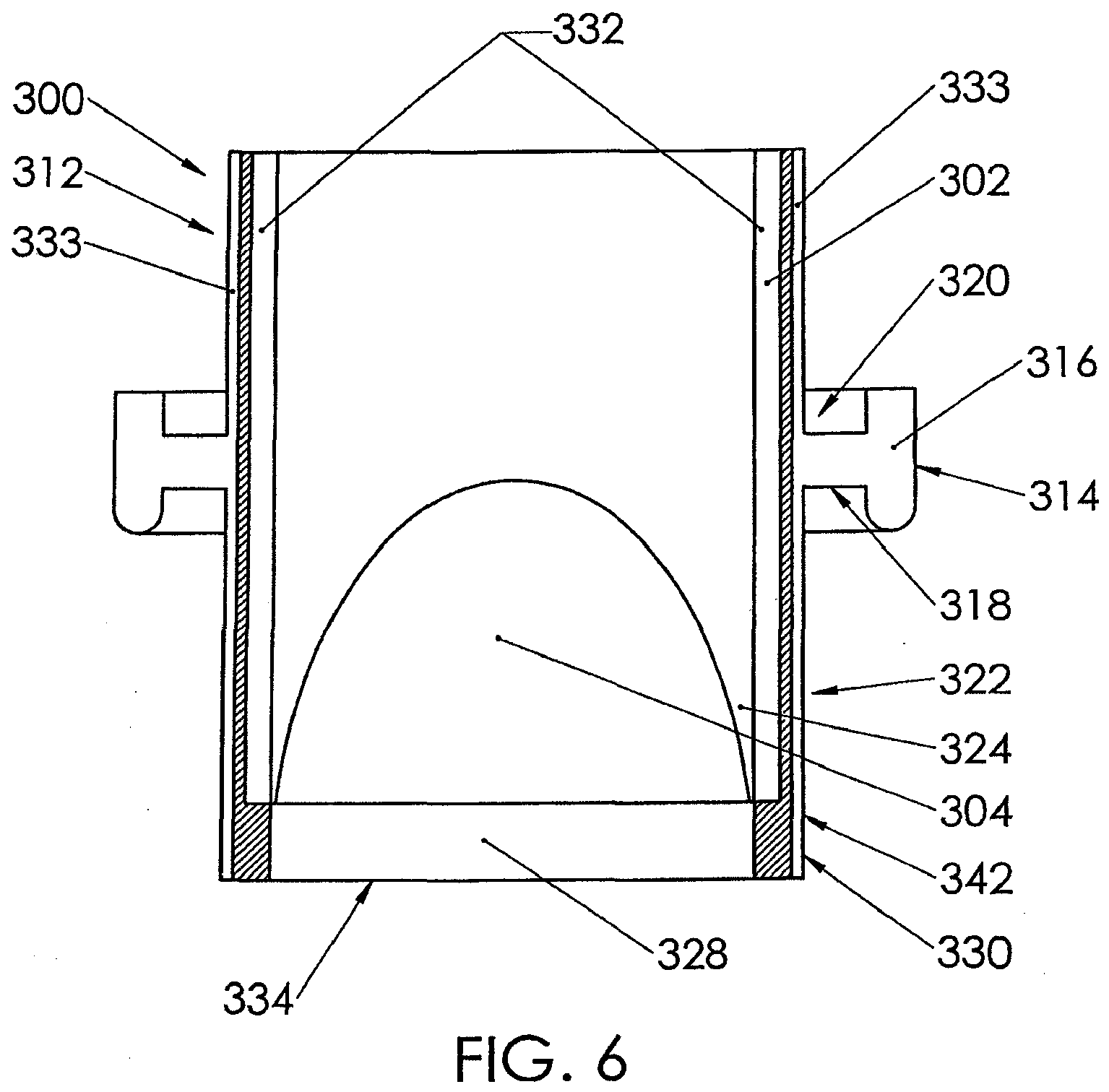 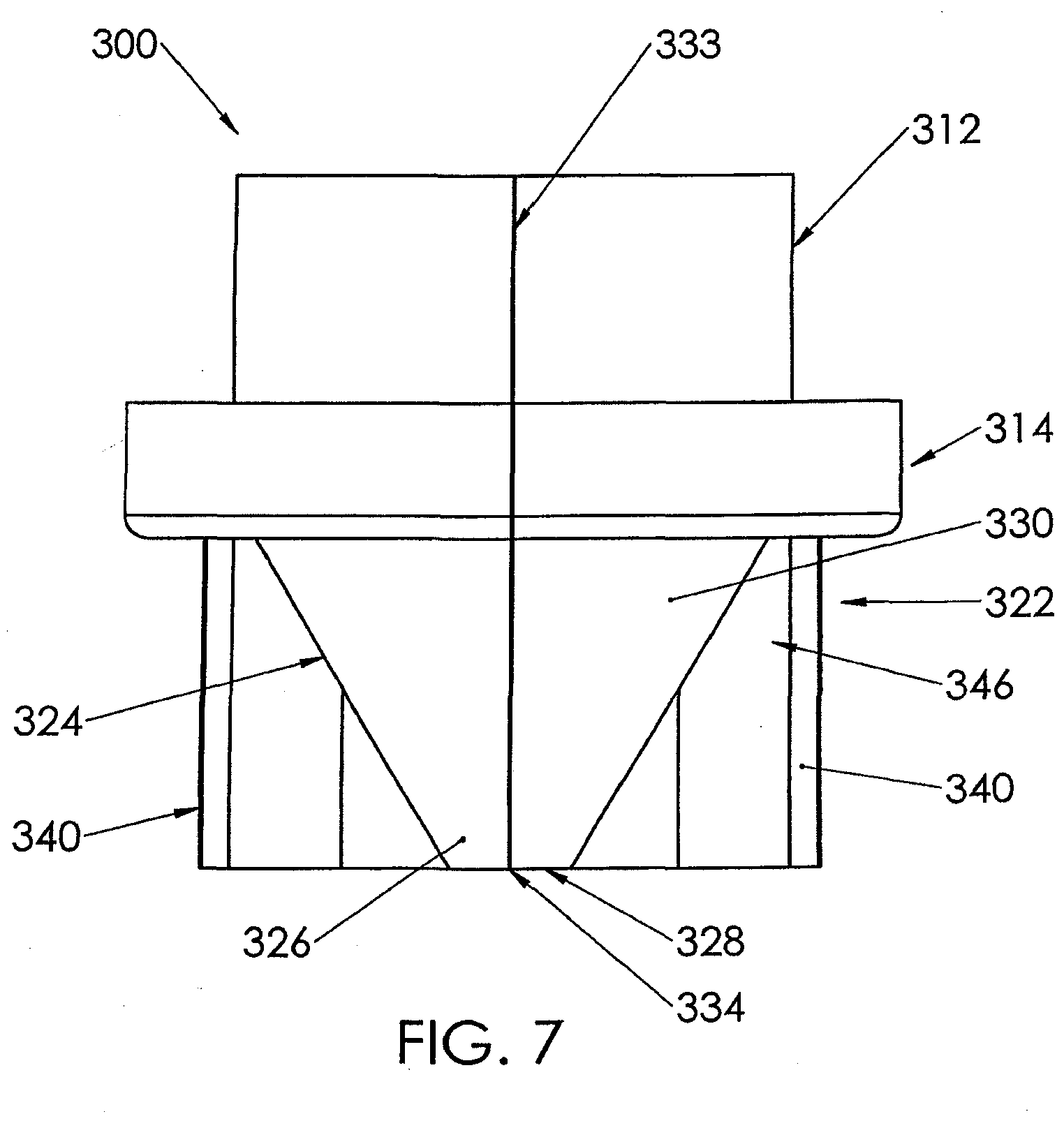 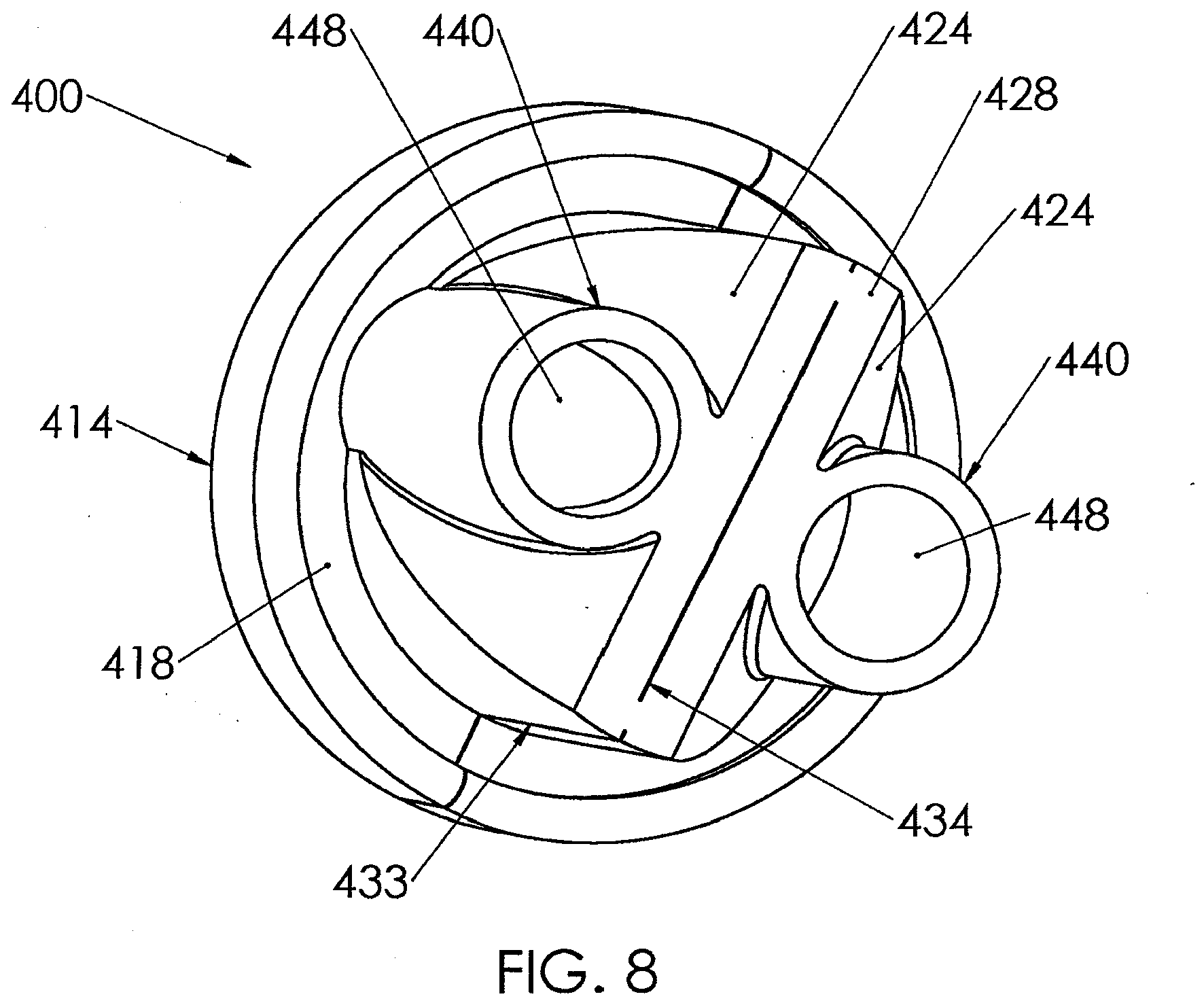 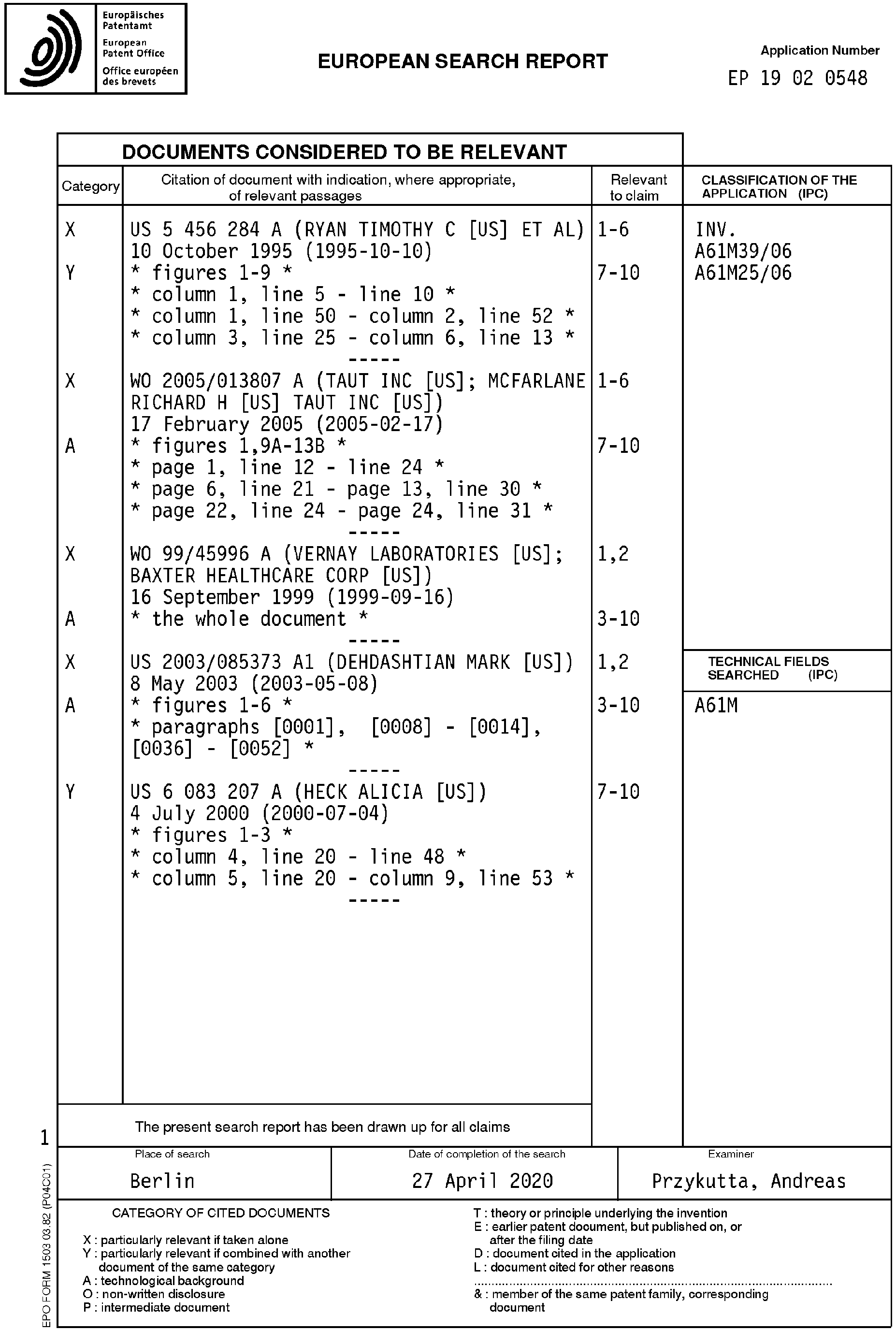 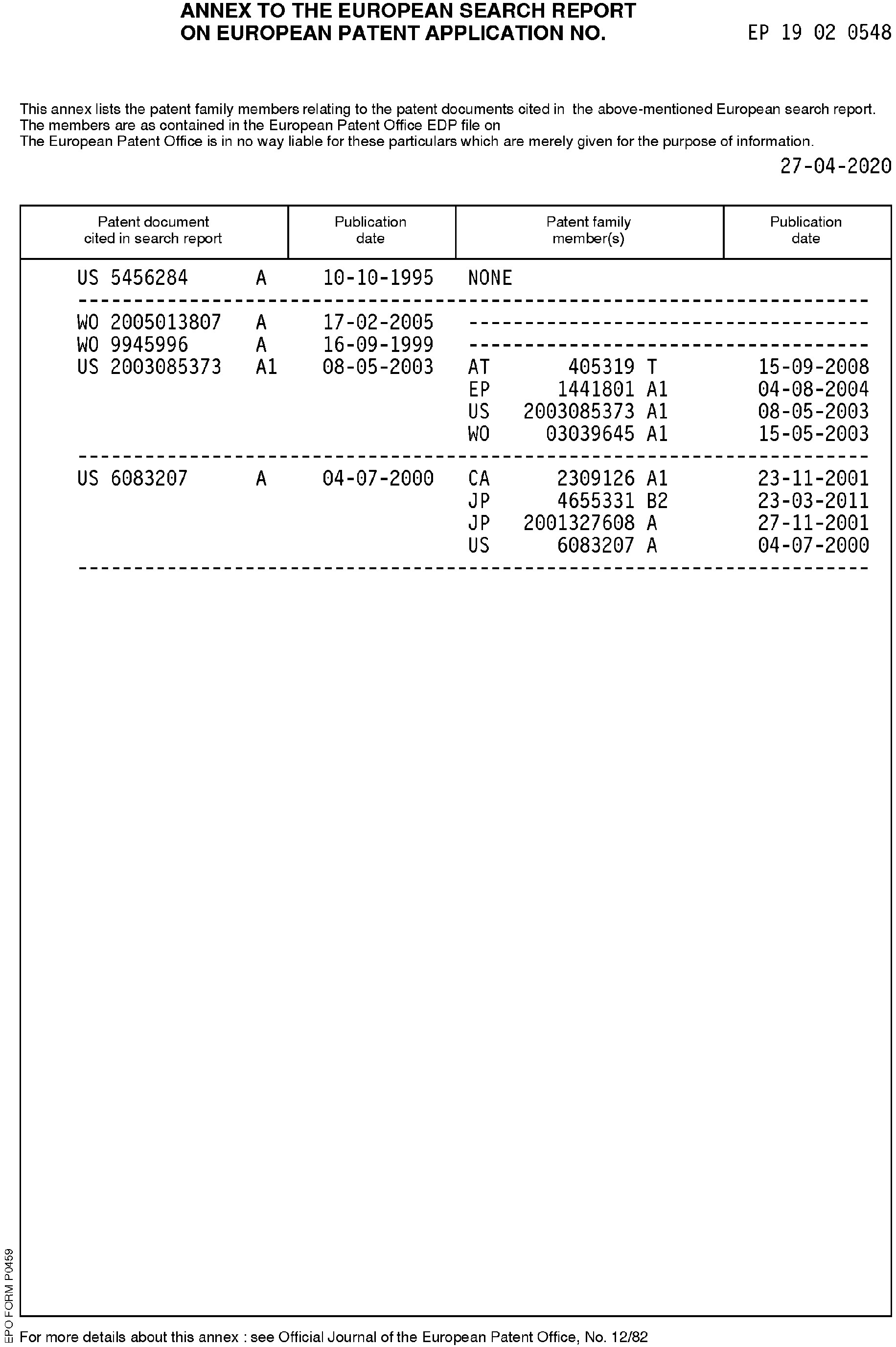