[0002] The removal of impurities from air is a long-existing problem, the importance of which is significantly growing due to the pollution problems of today. A basic technical solution for separating solid particles from a fluid stream is the cyclone.
[0003] For demanding air purification applications, developments on the cyclone concept are required. A variety of helical separators have been designed, comprising spiral channels within a gas conduit and outlets for solids-depleted and solids-enriched streams, respectively.
[0004] In EP 0 344 749 A2 is disclosed a separating device suitable for use in treating a particle containing gas stream to separate particles from a gas, or to clean the gas of particles. The device comprises an outer tube having an inlet end, a vortex-generating region and a separation region; and an inner extraction tube for conducting cleaned air out of the device. The vortex-generating region has a central core and helical blades arranged around the core, and is of constant diameter or diverging. The outer tube and the extraction tube are concentric, and between the tubes is an outlet port extending around a portion of the circumference. Particles in a feed stream entering the inlet end are set in a rotational motion, are carried to the periphery of the outer tube. A particle- enriched stream exits the outlet port while a particle-depleted stream exits through the extraction tube.

Fig. 1 is a schematic side sectional view of a separator according to the invention,

Fig. 2 is a perspective view of a flange part of the exit port section,

Fig. 3 is a schematic side view of a separator according to the invention combined with a cyclone pre-separator,

Fig. 4 is another schematic side view of a separator according to the invention combined with a cyclone pre-separator, rotated 90 degrees around a vertical axis relative to Fig. 3,

Fig. 5 is a top view according to section A-A as indicated in Fig. 3,

Fig. 6 is a detail side view of the internal structure of the cyclone pre-separator, and

Fig. 7 is a side sectional view of the cyclone pre-separator.

1. A device (1) for separating solid particles from a fluid, comprising an entry tube (2) having:

- an inlet port (3) for receiving an incoming fluid flow,

- introducing a fluid stream containing solid particles or droplets into an entry tube comprising a vortex section (4) having a diameter decreasing in the flow direction and at least one internal wall (6) forming at least one helical channel; thereby setting the fluid stream into a swirling motion;

- removing a particle- or droplet-enriched fluid stream through at least one peripherally arranged exit port (9) arranged in an exit port section (8) downstream of the vortex section (4),

- removing a particle- or droplet-depleted fluid stream through an outlet tube (10) arranged coaxially with the entry tube (2). 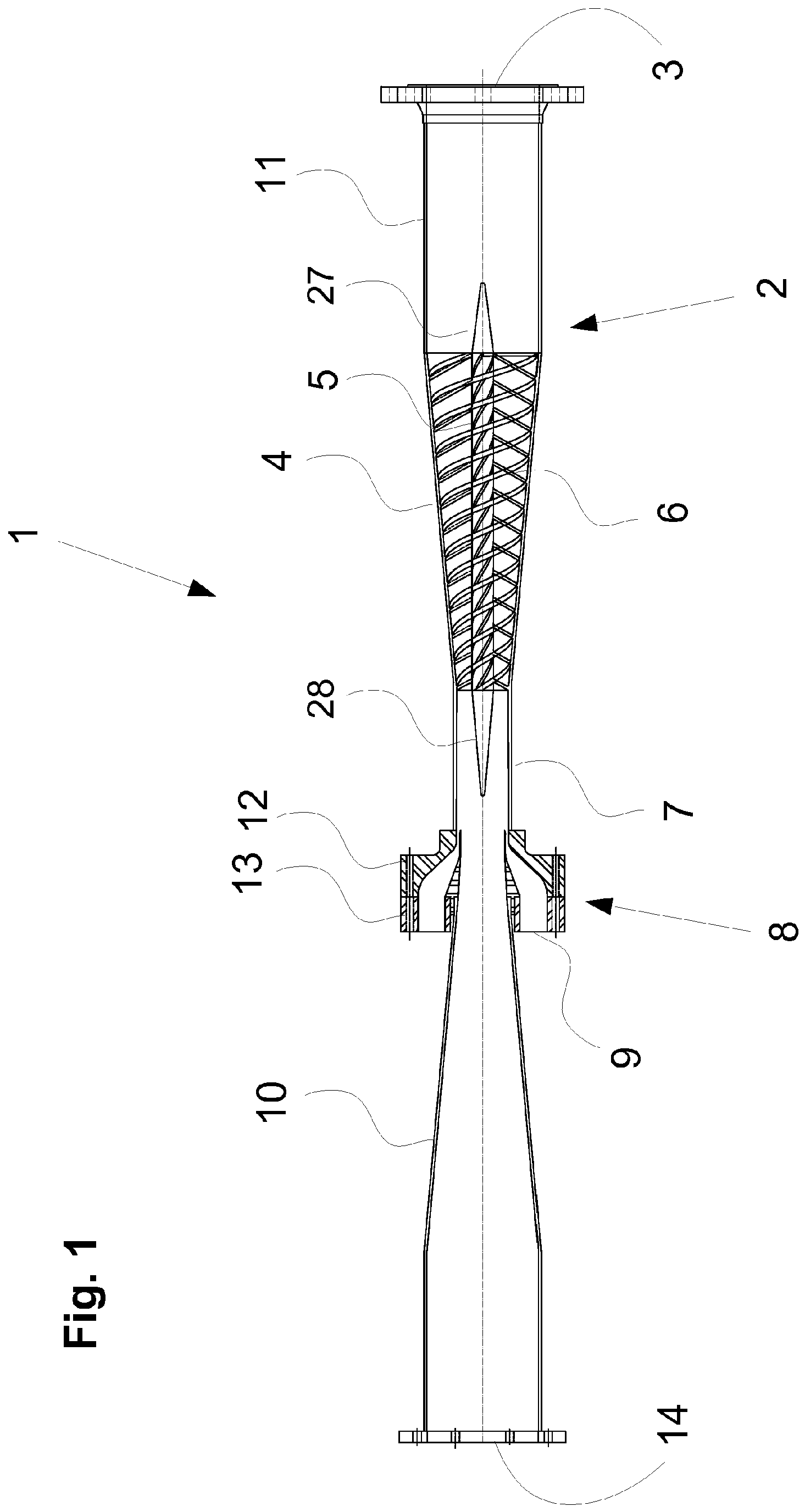 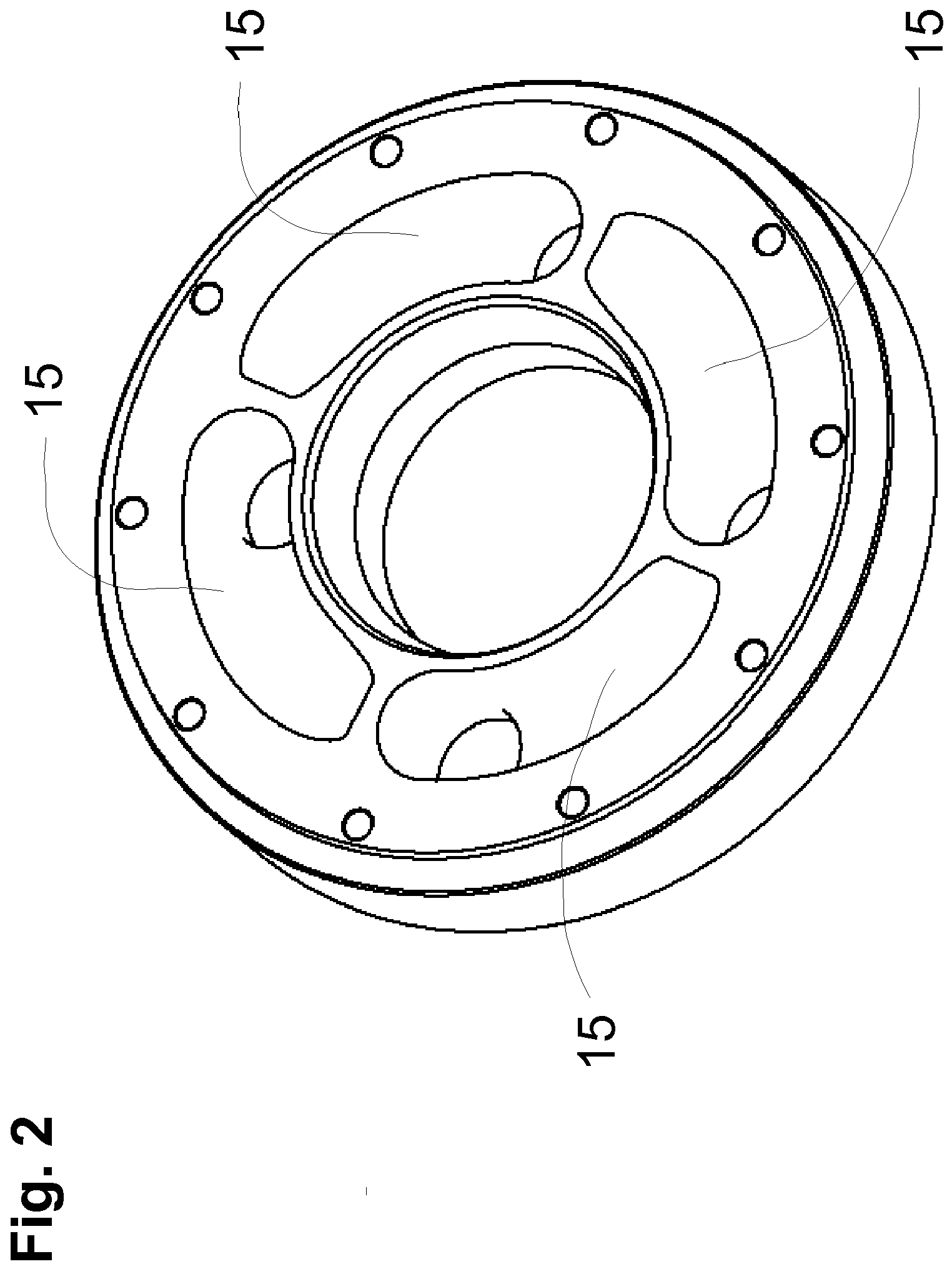 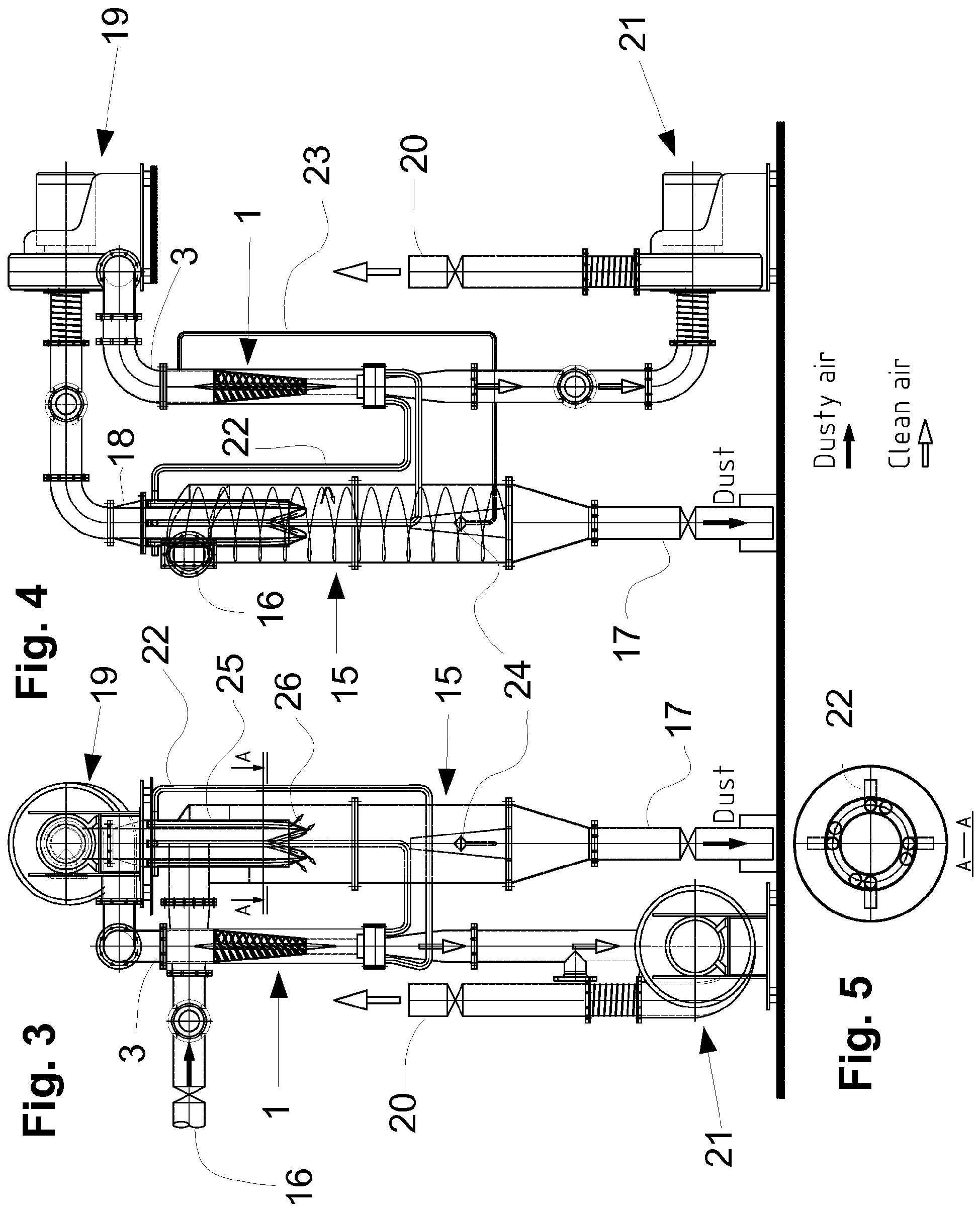 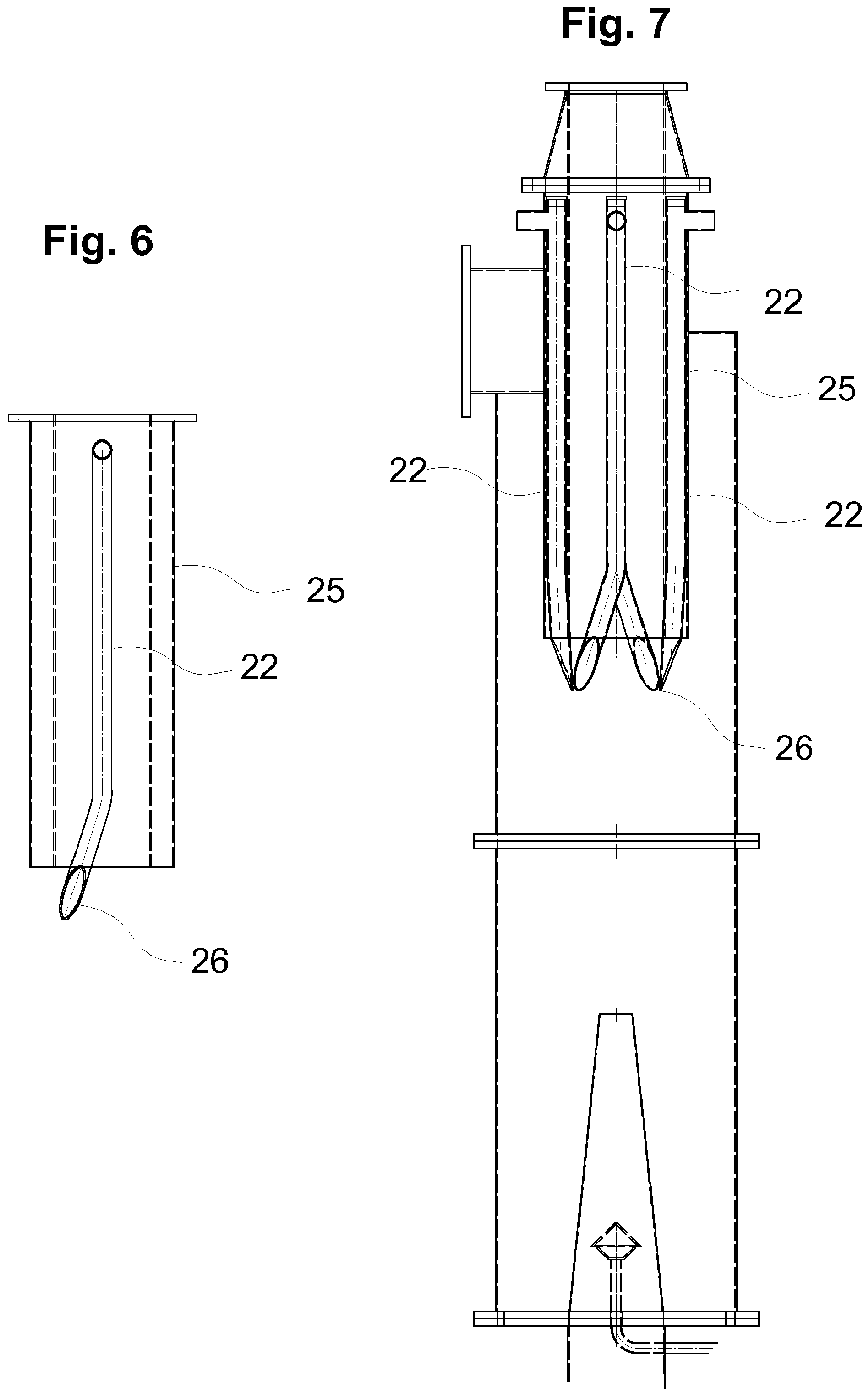 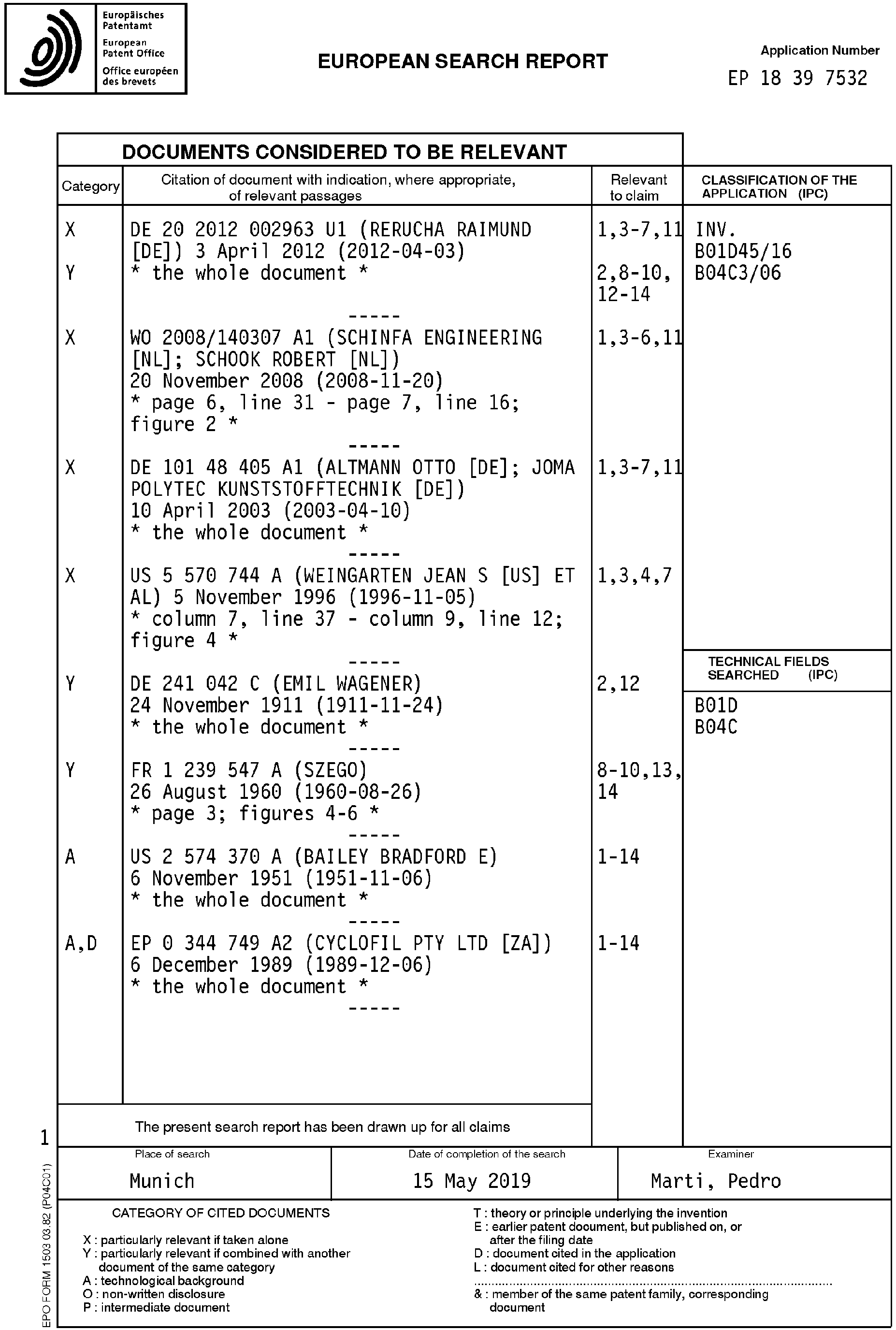