(57) The application describes a method for the preparation of 2,5-furan dicarboxylic acid comprising the step of contacting a feed comprising a compound selected from the group consisting of 5-hydroxymethylfurfural ("HMF"), an ester of 5-hydroxymethyl-furfural, 5-methylfurfural, 5-(chloromethyl)furfural, 5-methylfuroic acid, 5-(chloromethyl)furoic acid, 2,5-dimethylfuran and a mixture of two or more of these compounds with an oxidant in the presence of an oxidation catalyst at a temperature higher than 140 °C.

[0035] Experiments were carried out in parallel 8 ml magnetically stirred stainless steel batch reactors. The reactors are grouped in blocks containing 12 batch reactors. The standard procedure for all the reactions was as follows:
0.5 ml of starting material stock solution in acetic acid (0.78 mmol/ml) were added into a reactor lined with a Teflon insert. To the reactor 1 ml of a catalyst stock solution in acetic acid was subsequently added. In a typical experiment, a catalyst composition Co/Mn/Br with a relative 1-x-y ratio, the concentration of Co(OAc)2∗4H2O was varied. As a Mn source, Mn(OAc)2∗4H2O was used and as a bromine source NaBr was used. The reactors were closed with a rubber septum, after which the reactors were sealed and pressurized to the desired air pressure, ranging from 20-60 bars. After pressurization, the block with 12 reactors was placed in the test unit which was preheated at the desired temperature, ranging from 100 to 220 °C. After the desired reaction time, ranging from 0.5 hr to 24 hrs, the block is placed into an ice bath for 20 minutes. When the block had cooled down, it was depressurized. After opening, HPLC samples were prepared. First 5 ml of a saccharine solution in DMSO (11.04 mg/ml) was added to each reactor and the mixture was stirred for 5 minutes. Then 10 µl of this mixture was diluted to 1000 µl with water in a HPLC vial. The samples were analyzed using HPLC.

[0036] Example 1 shows the selectivity of FDCA in the oxidation of HMF, of a HMF/AMF 3/2 mixture, of a HMF/AMF 2/3 mixture and of AMF, respectively, with 2.7 mol% Co catalyst (relative to substrate), and Co/Mn molar ratio of 1/1, so that the catalyst concentration (Co + Mn) amounted to 5.4 mol%. The Br/(Co+Mn) molar ratio was 1.0; 0.7; 0.4 and 0.1 at 0.26 M substrate concentration in acetic acid at 180 °C for 1 hr with 20 bar air. The amount of oxygen was 2.69 mol oxygen per mol substrate. Under these conditions, higher Br amounts give higher yields but when Br/(Co+Mn) > 1, corrosion will be a problem on commercial scale. HMF gives slightly higher yields than AMF at one hour reaction time. The results of these experiments are given in Table 1.

[0037] Example 2 shows the selectivity to FDCA for the AMF oxidation of Example 1, together with the comparative examples based on the experimental conditions described in US 2009/0156841. In those comparative experiments (2a and 2b) 10 wt/wt% AMF in acetic acid was oxidized with 1.75 and 2.65 mol % Co catalyst and a fixed Br/(Co + Mn) molar ratio of 1.0 and a Co/Mn molar ratio of 1.0 at 100 °C and 30 bar for 2 hours. The amount of oxygen was 2.88 mol oxygen per mol substrate. Under these conditions, the yield of FDCA was lower than the result suggested in US 2009/0156841 and also lower than the results obtained at higher temperature. The results of these experiments are given in Table 2.

[0038] Example 3 shows the yield of FDCA in the oxidation of 5-methylfurfural (5MF) and 2,5-dimethylfurfural (DMF) at 180 °C with 2.7 mol% Co catalyst (relative to substrate), and Co/Mn ratio of 1/1, so that the catalyst concentration (Co + Mn) amounted to 5.4 mol%. The Br/(Co+Mn) molar ratio was 1.0, 0.7, 0.4 and 0.1. The substrate concentration was 0.26 M in acetic acid. The reaction temperature was at 180 °C and the reaction was conducted with 50 bars air. The amount of oxygen was 6.7 mol oxygen per mol substrate. Under these conditions, higher Br amounts give higher yields but when Br/(Co+Mn) > 1, corrosion will be a problem on commercial scale. Reactions with 5-MF give higher yields than reactions with DMF. The results of these experiments are also given in Table 3.
Table 1
Table 2
Table 3 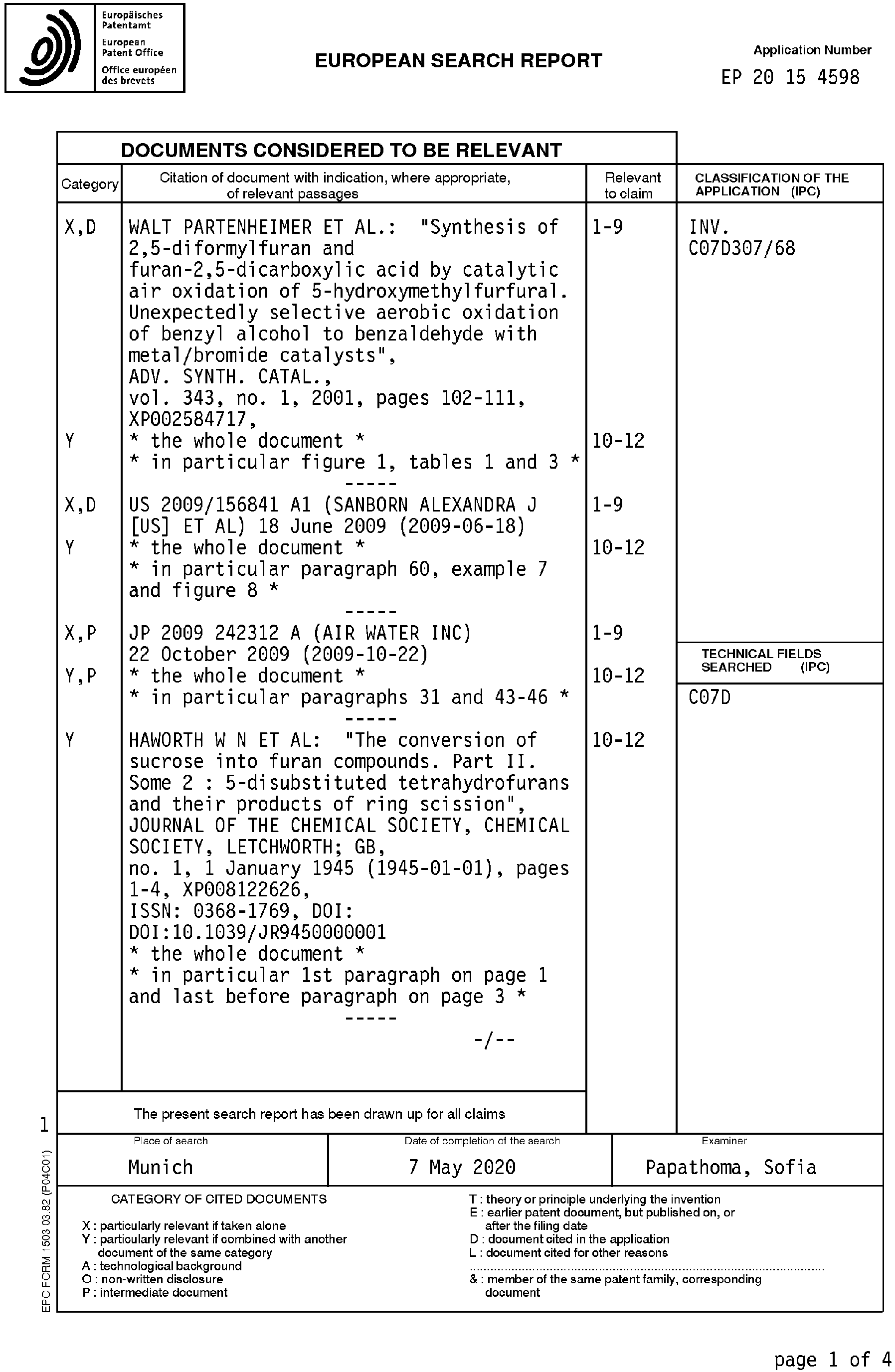 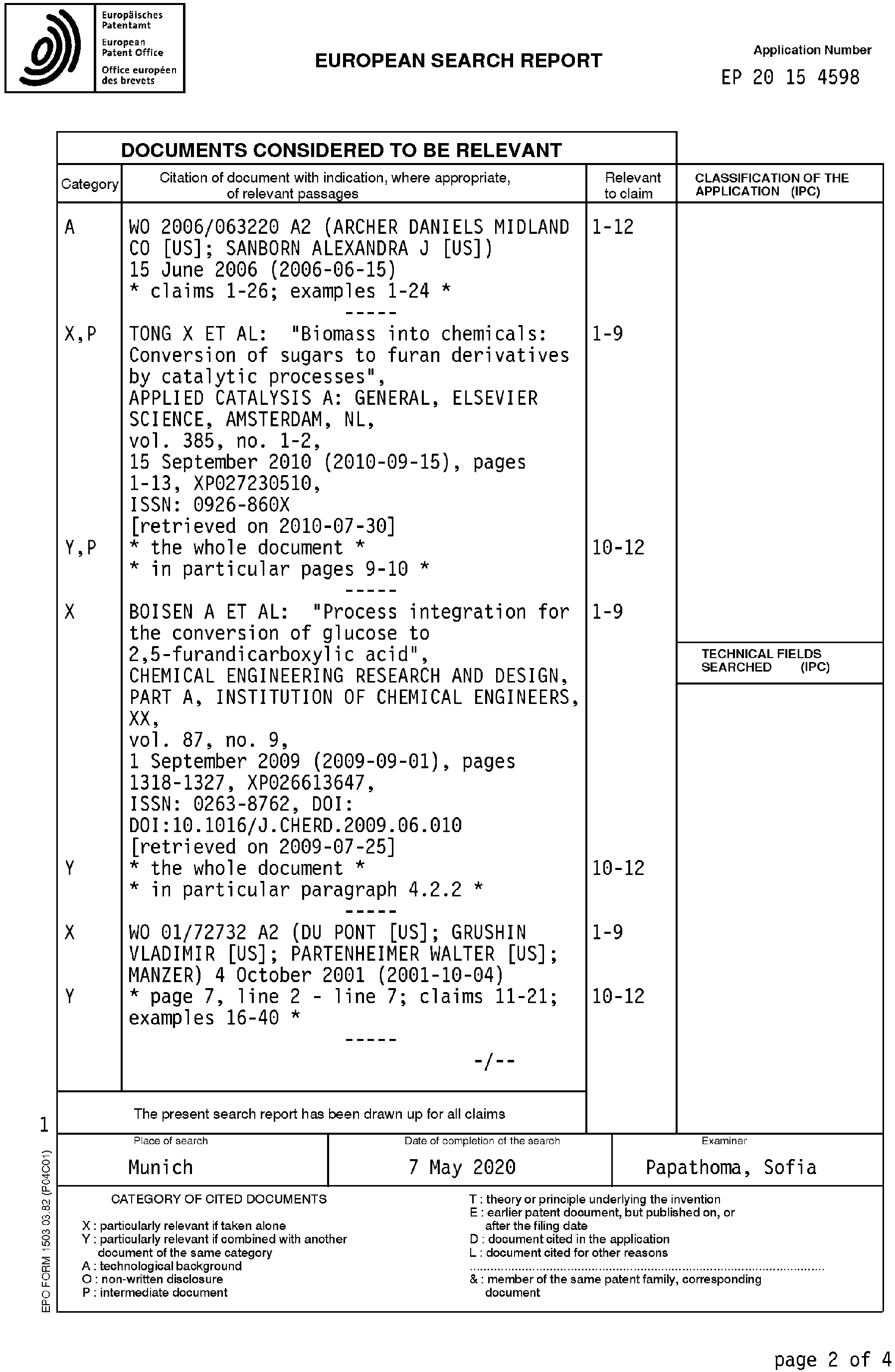 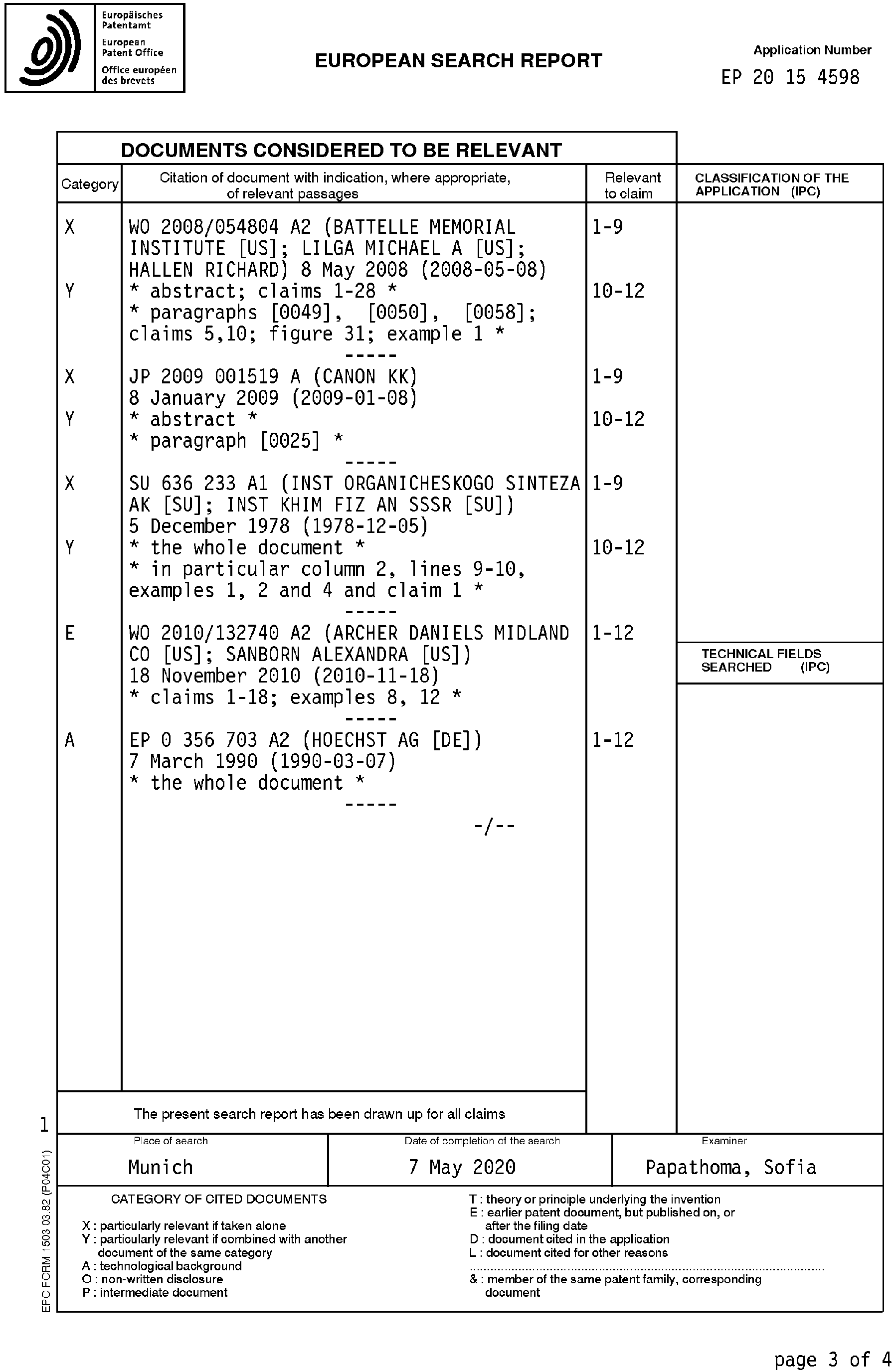 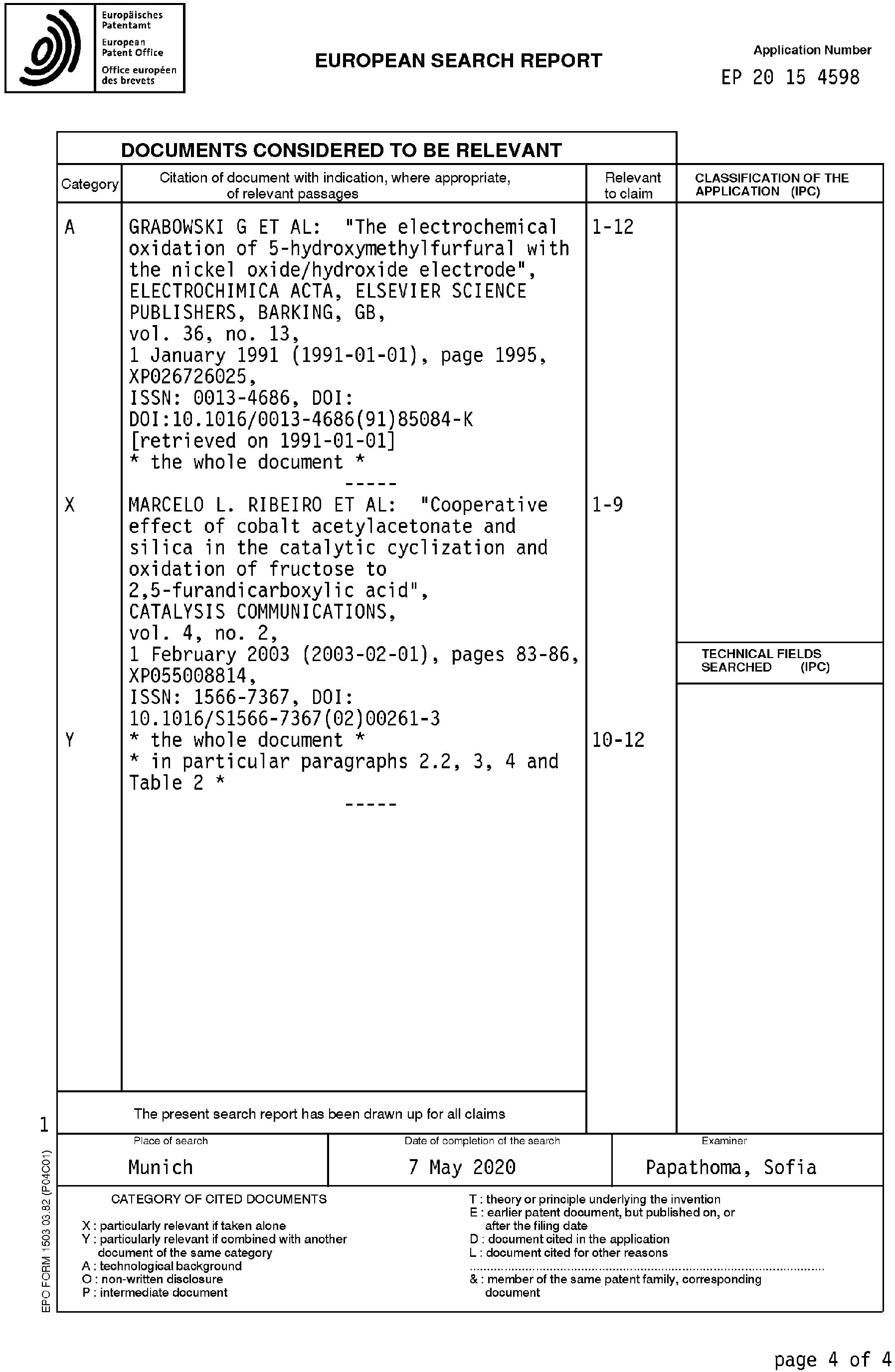 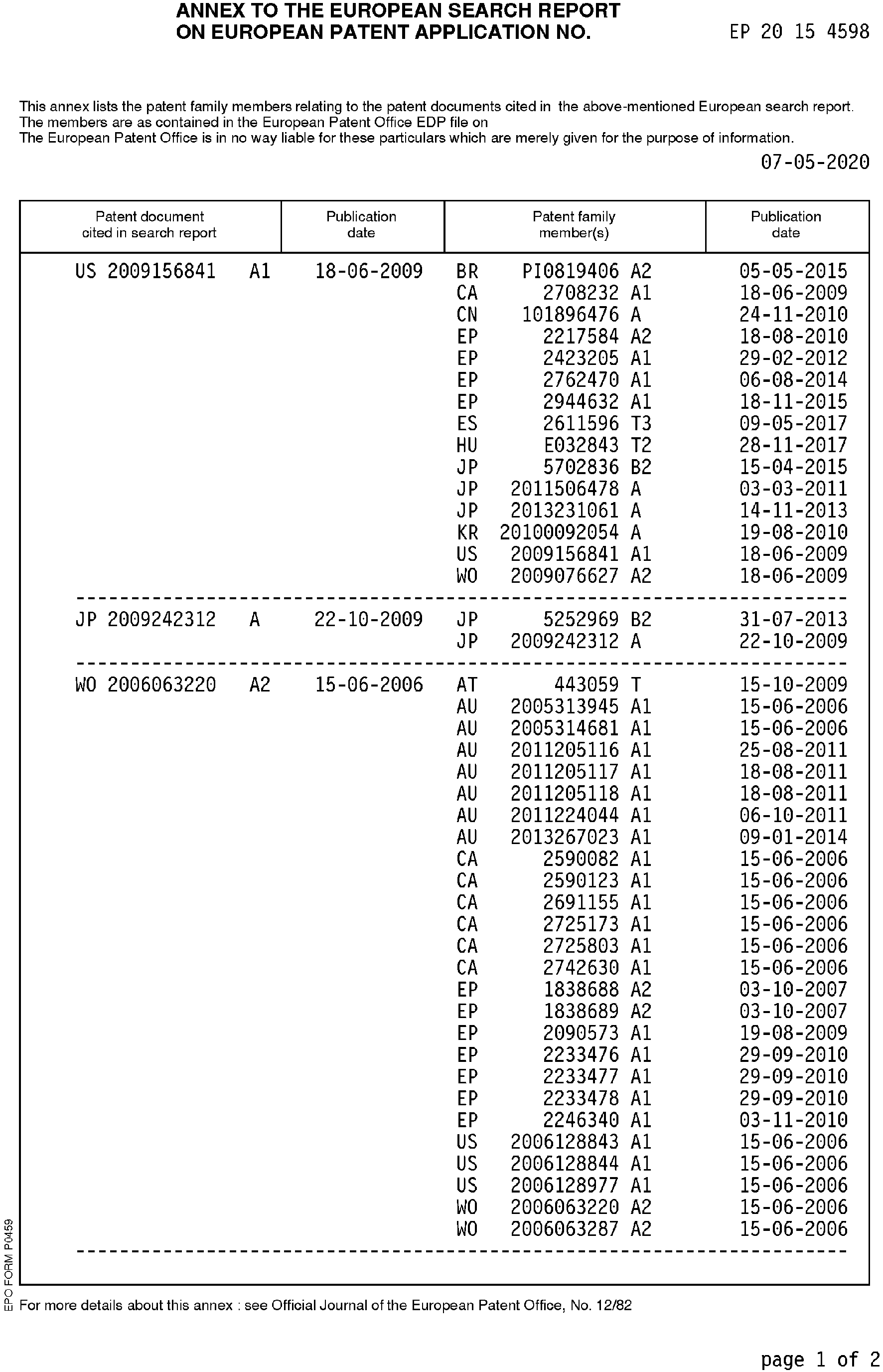 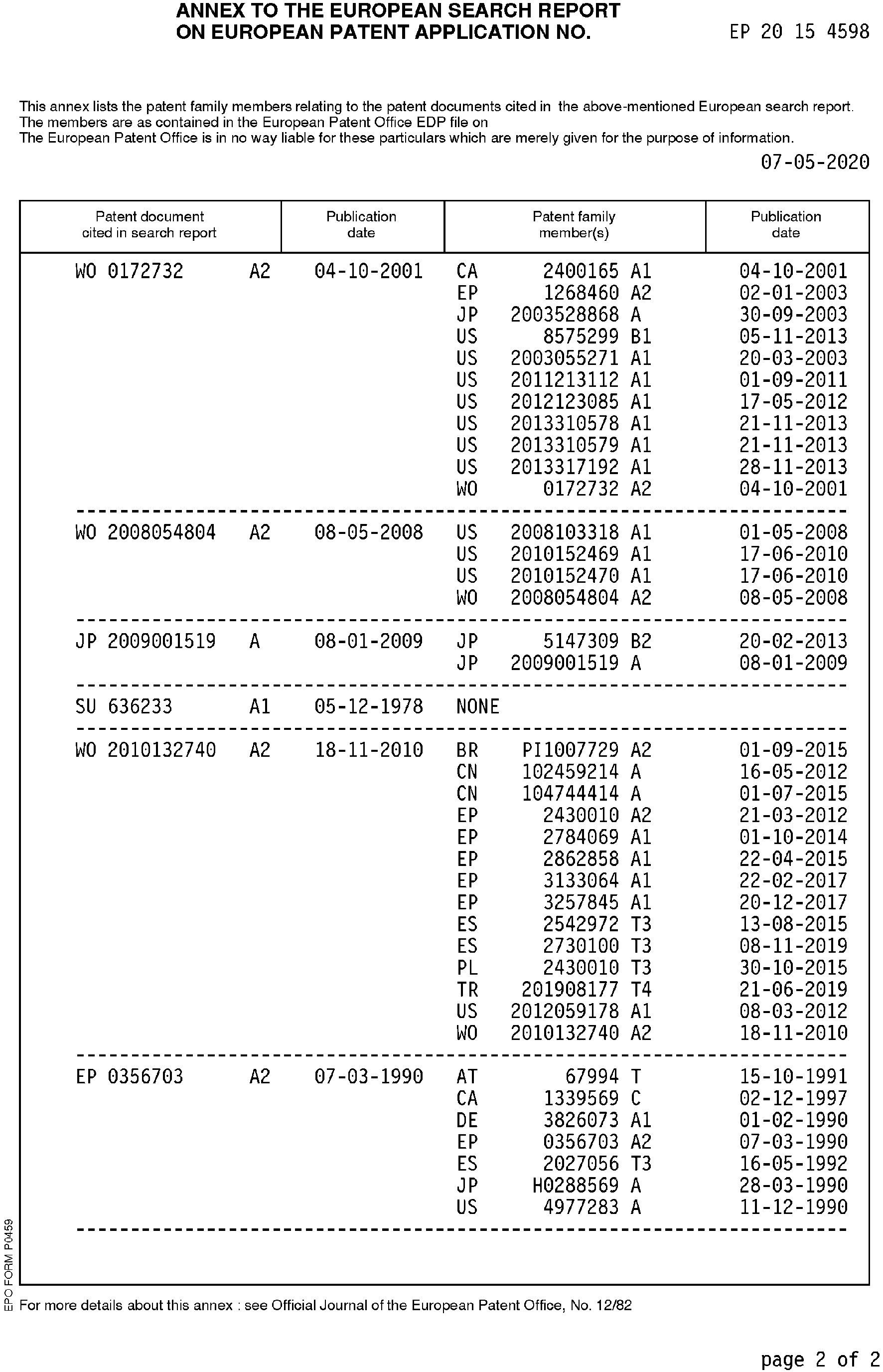