[0001] The present disclosure concerns a passive depressurisation valve for a nuclear reactor.

Background of the Disclosure

[0002] Nuclear reactors are a desirable addition to a power grid as they present ideal base load stations. This is because they are considered a low carbon source of electricity and are not dependent upon variable weather conditions, which are limiting factors for other low carbon sources. These features allow them to be used as the backbone of a complete electricity network. One of the most common types of nuclear reactors used around the world is the pressurised water reactor (PWR) in which a primary circuit of pressurised water is used as the coolant, moderator and as well as the heat transfer fluid to the steam generator. The relative simplicity of the system provides them with the advantage that these systems can be scaled. Consequently, they are suitable for both large scale power plants as well as for small modular reactors. However, as with all nuclear power stations they require a robust safety system to prevent accidents.
[0003] Modern safety systems for nuclear reactors aim to be both active and passive. Active systems operate under the control of an operator and/or running systems, such as pumps and generators, which in normal operation are associated with emergency control. Passive safety systems do not require any external operator input or active systems running in order to operate. This latter system is beneficial as it allows for automatic self-control of the system that is not requisite on external power or user input. In emergency situations this is desirable as, in certain cases, power to the reactor may be disrupted or it may not be possible for operators to control the system manually in which case passive control systems allow the system to remain safe.
[0004] In the case of a pressurised water reactor one of the main safety concerns is a Loss of Coolant Accident (LOCA) event, in which the cooling water entering into the reactor is lost and would, if not rectified, lead to the failure of a nuclear reactor. This is because without the coolant, the heat produced by the radioactive decay within the fuel rods of the reactor would increase to a point at which the reactor is damaged. This could result in a serious nuclear incident. One of the ways that this can occur is if the coolant boils, which can lead to the melt of the fuel clad and the release of the fission products. Consequently, to prevent this from happening nuclear reactors are equipped with emergency cooling systems that can replace the cooling water if there is a fault. In a PWR the system to protect against this is known as the Emergency Core Cooling System (ECCS). These systems typically involve the opening of pipelines to discharge the present reactor coolant. The discharge pipework for this is engineered to provide sufficient capacity to remove the heated coolant, whilst maintaining a low reactor circuit pressure. In order to replace this discharged coolant, fresh coolant is injected, under the force of gravity, into the system. These discharge pipelines are normally isolated from the reactor using isolation vales, which can be opened upon the detection of a LOCA. Typically this involves instrumentation to monitor the parameters of the plant, a control system to generate initiation signals on reaching set points and valve actuators to change the valve positions.
[0005] Systems to achieve this isolation of the coolant from the emergency supply of cooling fluid in the event of a LOCA are known in the art. Accumulator Isolation Passive Valve (AIPV) are used to isolate the pressurised accumulator at 55 bar and the core at 70 bar during normal operation when there is a reduction of pressure in the reactor circuit, the valve opens proportional to the difference in pressure between the accumulator located upstream and the reactor circuit and the core downstream. For the AIPV, since the valve position is proportional to the pressure difference, once the pressure equalises, either due to a recovery of reactor circuit pressure or from a discharge of accumulator pressure, the valve shuts, isolating the line once again. The valve therefore does not remain latched open to allow for complete system depressurisation. Alternatively, an Automatic Safety Valve for Accumulator Depressurisation (ASVAD) valve can be used. These are used to vent gas from the gas space of an accumulator by opening a valve when the force applied from the pressure in the system drops below a level, which is set by the force applied by the spring acting on the valve plunger. The ASVAD valve is not an isolation valve in the usual sense, but is specifically designed for the venting of gas. As such, it is not suitable for the isolation of high pressure, high temperature water. As neither valve operates based upon temperature and cannot open in the event of an intact circuit fault transient in which the system pressure and temperature rise, as such improvements are required. The AP1000 reactor design by Westinghouse features a valve for discharging the heated coolant - termed the Squib Valve. The Squib valve is equipped with an explosive charge that is used to open the valve; however, spurious operation of the squib valve could result in a major radiological hazard. Consequently, the safety justification of the plant design is dependent upon a highly reliable Control and instrumentation (C&I) system to prevent spurious operation, and as such adds significant cost to the plant design. As such there is a desire to develop a simplified passive valve to allow for depressurisation of the coolant circuit.

Summary of the Disclosure

[0006] According to a first aspect there is provided a depressurisation valve for a cooling circuit comprising a main valve having a piston and valve stem located in a main chamber, the main chamber being connected to a fluid supply via a pilot line with a secondary valve and a blowdown line, wherein fluid enters the main chamber via the pilot line, which has a lower fluid resistance than the blowdown line; and wherein in use the pressure of the fluid in the main chamber maintains the main valve in a closed position, and under extreme conditions fluid is prevented from entering the main chamber via a closure of the secondary valve on the pilot line and reduce the pressure from the valve, moving it to its open position.
[0007] The use of an opening valve as the passive valve allows for complete depressurisation of the core circuit. Furthermore, the valve can be applied in a number of configurations in which the valve can be positioned. Consequently, this valve acts as an improvement over the prior art and does not require the explosive charges required by the Squib.
[0008] The secondary valve on the pilot line may be a magnovalve.
[0009] The secondary valve on the pilot line may be a high pressure latching isolation valve.
[0010] A poppet valve may be used to further seal the main chamber from the pilot line.
[0011] The depressurisation valve may be located upstream of an automatic isolation valve.
[0012] The blowdown line may be provided outside of the main chamber.
[0013] The blowdown line may be provided inside the main chamber.
[0014] According to a second aspect there is provided a nuclear reactor that includes a depressurisation valve as discussed above.
[0015] The skilled person will appreciate that except where mutually exclusive, a feature described in relation to any one of the above aspects may be applied mutatis mutandis to any other aspect. Furthermore except where mutually exclusive any feature described herein may be applied to any aspect and/or combined with any other feature described herein.

Brief description of the Drawings

[0016] Embodiments will now be described by way of example only, with reference to the Figures, in which:

Figure 1 is a schematic of a first embodiment of the automatic depressurisation valve of the present disclosure;

Figure 2 is a schematic of a second embodiment of the automatic depressurisation valve of the present disclosure; and

Figure 3 is a schematic of a third embodiment of the automatic depressurisation valve of the present disclosure.

1. A depressurisation valve for a cooling system comprising:

a main chamber having a main valve, a pilot line having a secondary valve and a blowdown line; the main valve being located to seal a path of the cooling system, 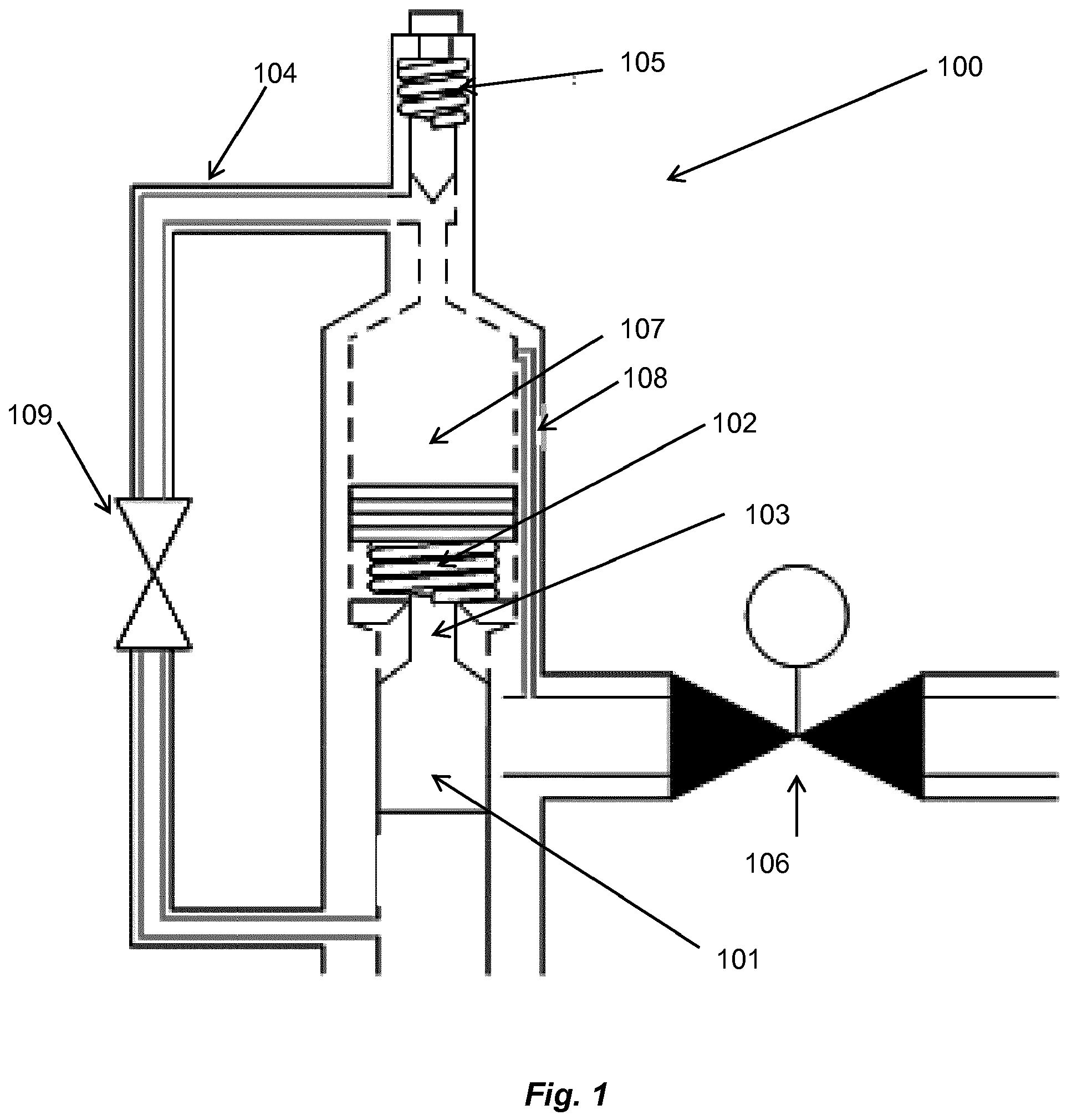 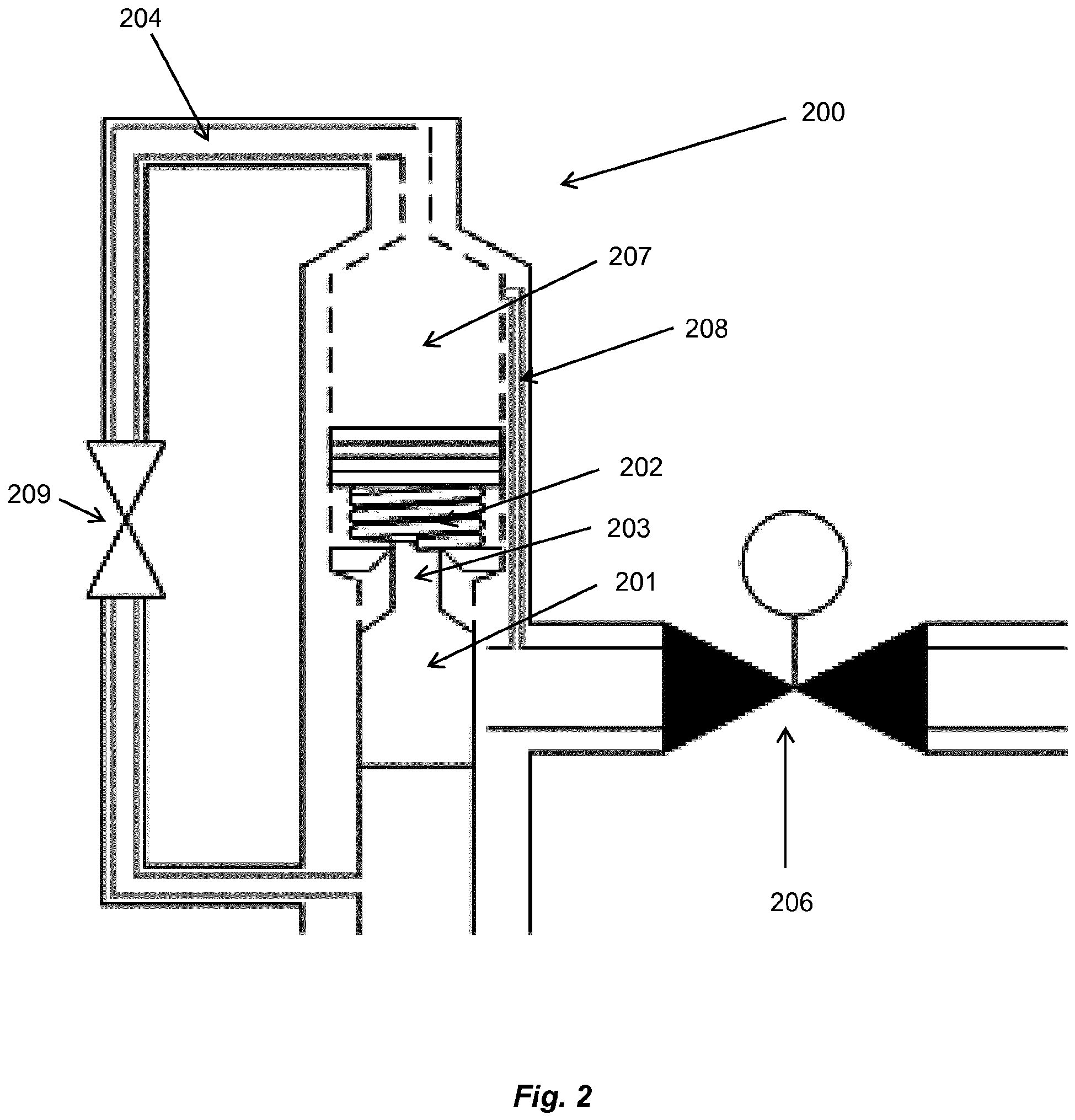 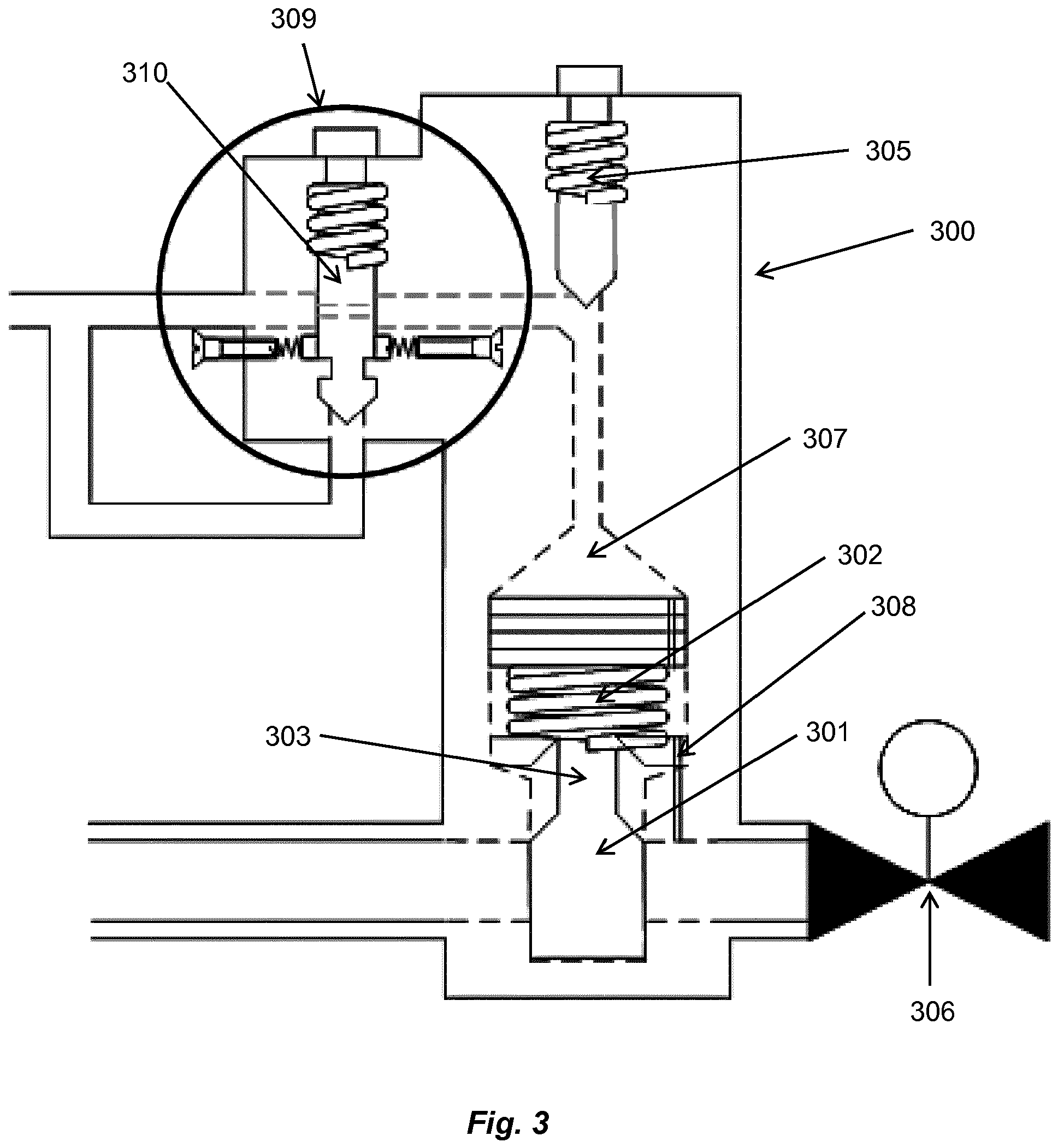 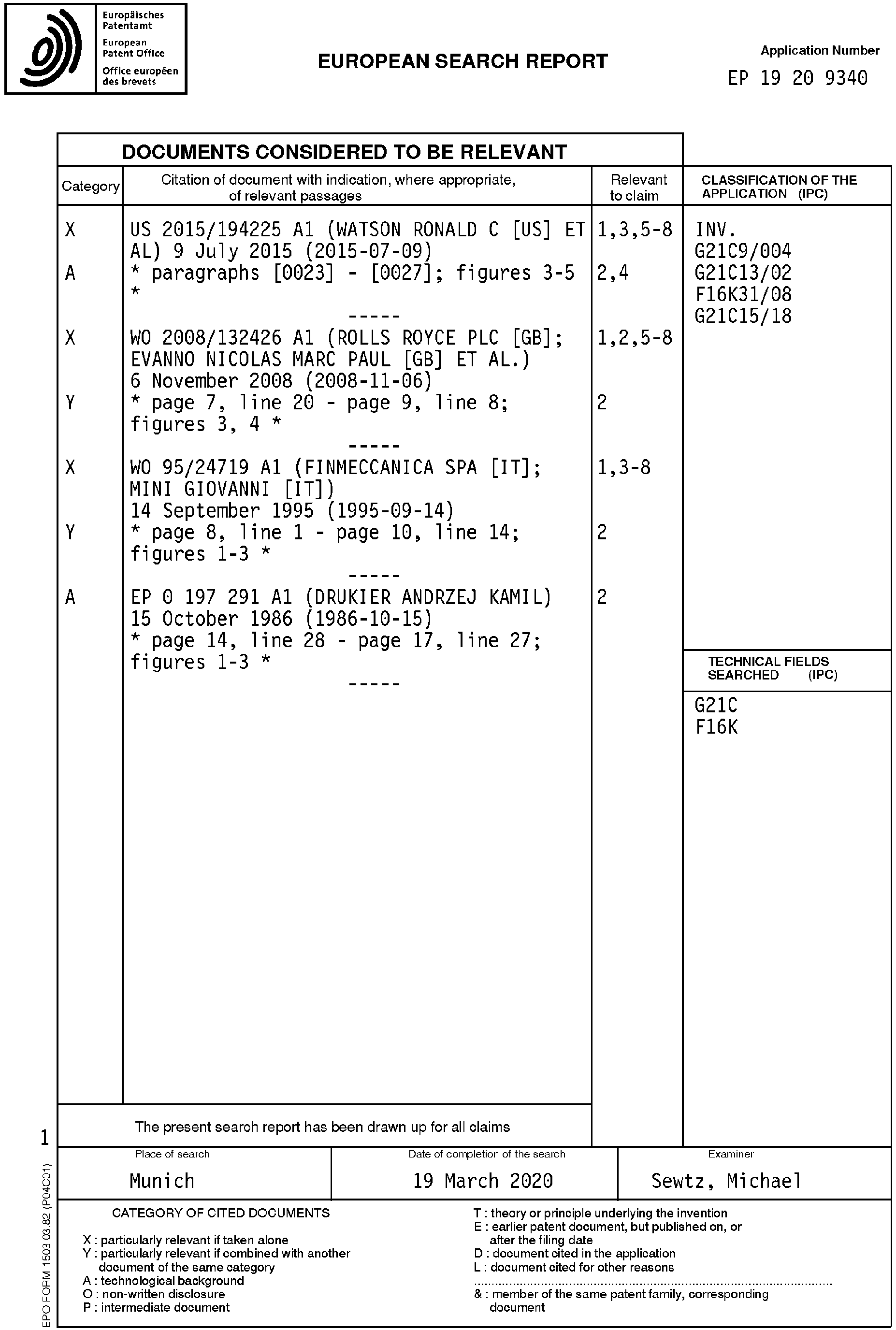 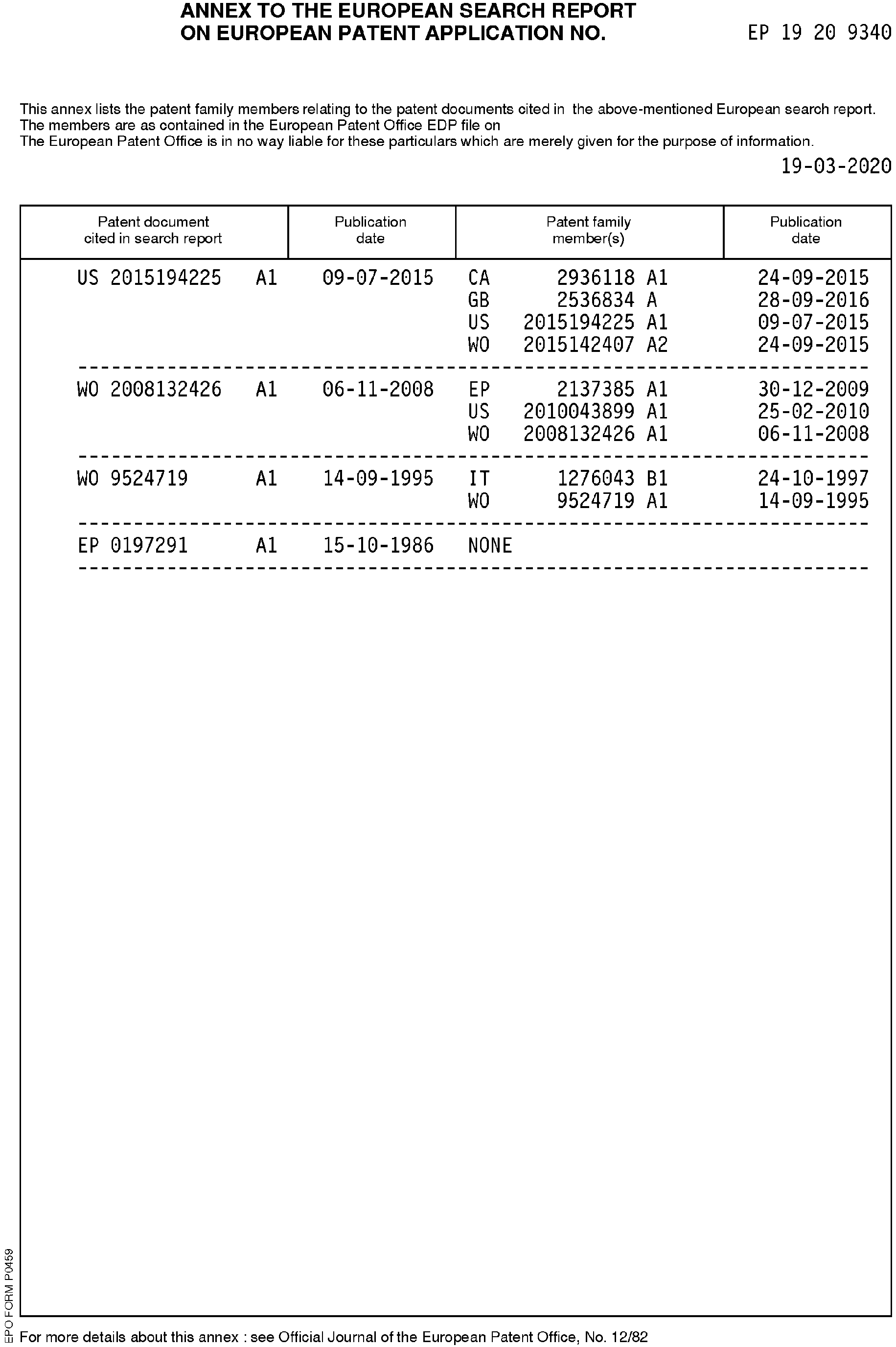