[0001] This invention relates to a glazing unit on an aircraft, such as the window on a wing light.

[0002] In order to protect the underlying components from the elements and to provide a smooth aerodynamic surface in flight, aircraft lighting systems comprise aerodynamically shaped glazing panels which cover the lamps and associated components. Such lighting systems are installed on the wings and various other surfaces of the aircraft exposed to the external environment during flight.
[0003] The impact of particulate matter and water droplets during flight at very high speeds acts to erode the outer surface of the glazing panel and thus detrimentally affect its transparency. This erosion appears as "clouding" or "misting" of the glazing. As this erosive process continues, the glazing unit degrades and must be replaced before it falls below the transparency standard required for various regulations, such as JAR (Joint Aviation Regulation), FAR (Federal Aviation Regulation) and EASA (European Aviation Safety Agency).
[0004] The ability of the glazing unit to allow light to pass through can be estimated visually (by the appearance of the erosion), or light levels can be measured at the exterior of the unit using a light meter or similar device. The former method is subjective and therefore inaccurate, whereas the latter method involves the use of specialist equipment.
[0005] EP2457832 proposes a glazing erosion indicator comprising a decal bearing a mark or pattern. The decal may be applied to an interior or exterior surface of the glazing unit. If the decal is applied to an exterior surface then, as the glazing becomes eroded, the decal is worn away so that the mark or pattern disappears. This provides a visual indicator to ground crew that the part needs to be replaced. If the decal is applied to an interior surface of the glazing unit then, as the glazing unit is eroded, the mark or pattern on the decal becomes obscured or indistinct, at which point the ground crew replaces the glazing unit.
[0006] The regular replacement of such glazing units is costly and time-consuming. It has been proposed to increase the service life of glazing units by sanding and polishing the eroded areas in order to restore their optical clarity, and thus remove the need for a visual erosion indicator. A problem which may be encountered with this proposal is that the act of polishing the glazing unit removes material from the glazing. There is a concern that repeated polishing could weaken the glazing unit or cause undesirable optical effects.

BRIEF SUMMARY OF THE TECHNOLOGY

[0007] The invention provides an aircraft glazing unit comprising a body of transparent material and at least one subsurface thickness indicator at a predetermined depth within the material. The provision of a subsurface thickness indicator allows for the unit to be repolished to remove erosion, whilst providing a visual indicator to ground crew of the remaining thickness of material in the unit. In this way, the service lifetime of the glazing unit can be extended.
[0008] Preferably, a plurality of subsurface thickness indicators is provided. These may all be provided at one depth within the material. This allows the ground crew to see that the polishing process is applied selectively over the exterior surface of the unit so as to maintain an even thickness of material.
[0009] Alternatively, or additionally, the indicators may be provided at different depths within the material. As a further alternative, the subsurface indicators may be formed of groups of indicators, with all the indicators of a group being at one depth, but the groups themselves being at different respective depths. The provisions of indicators at different depths allows for monitoring of the gradual erosion of the material, so that an estimate of the remaining lifetime of the unit can be made.
[0010] Preferably, at least one indicator comprises a mark identifying a minimum allowable thickness of the glazing unit. This allows the ground crew to determine when the unit has reached its end of service.
[0011] Advantageously, the, or each, indicator is formed by subsurface laser etching. This allows for precise and accurate mark making within defined regions of the transparent material.
[0012] The invention further provides a method of manufacture of an aircraft glazing unit comprising the steps of: focusing a laser beam at a predetermined depth within the body of transparent material; and controlling the laser beam to form at least one subsurface indicator mark.
[0013] Preferably, the step of controlling the laser beam comprises pulsing the laser and moving the beam and body relative to each other, so that the, or each, subsurface indicator mark comprises a dot matrix.
[0014] Advantageously, the method further comprises the step of focusing the laser beam at different respective predetermined depths within the body of the transparent material; and controlling the laser beam to form subsurface indicator marks at the different respective depths.
[0015] The invention also provides a method of maintaining the operation of an aircraft glazing unit comprising the steps of: polishing an exterior surface of the transparent body; and subsequently inspecting the condition of the, or each, subsurface thickness indicator.
[0016] Preferably, the method further comprises the step of selectively polishing the exterior surface in dependence on the appearance of the, or each, subsurface thickness indicator. This enables the transparent material to be maintained to a uniform thickness across the glazing unit after polishing.
[0017] The aircraft glazing unit of the present invention may be employed in an aircraft light, to protect a lamp or lamps. The aircraft light may form part of an aircraft.

[0018] The invention will now be described, by way of example, with reference to the accompanying drawings in which:

Figure 1 is a perspective view of an aircraft incorporating a glazing unit constructed according to the invention;

Figure 2 is a perspective view of a glazing unit constructed according to the invention;

Figure 3 is a close-up view of part of the glazing unit of Figure 2;

Figure 4 is a perspective view of an alternative glazing unit constructed according to the invention; and

Figure 5 is a schematic drawing of apparatus suitable for carrying out part of the method of making the glazing unit of Figures 2, 3 or 4.

DETAILED DESCRIPTION OF EMBODIMENTS OF THE TECHNOLOGY 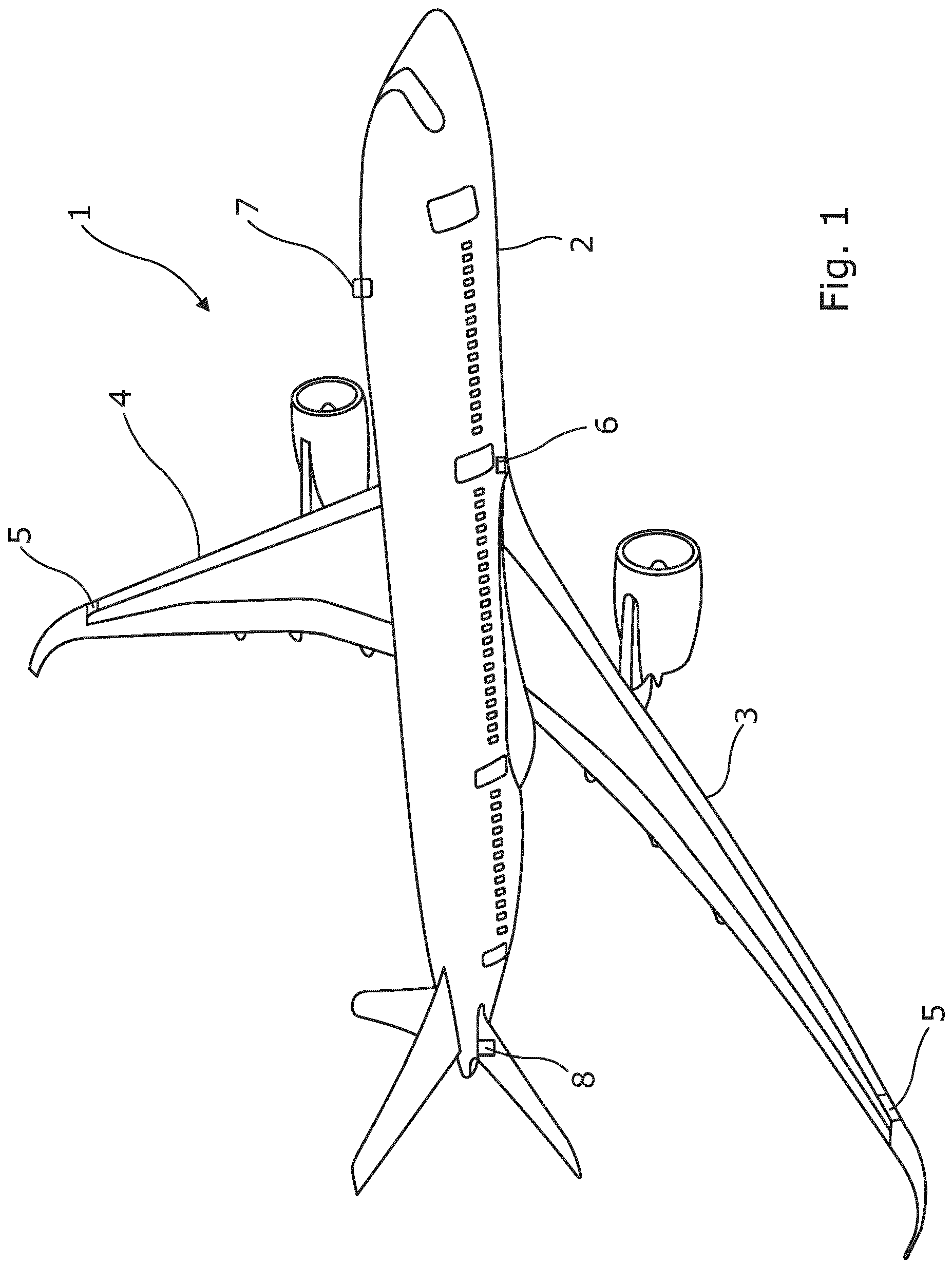 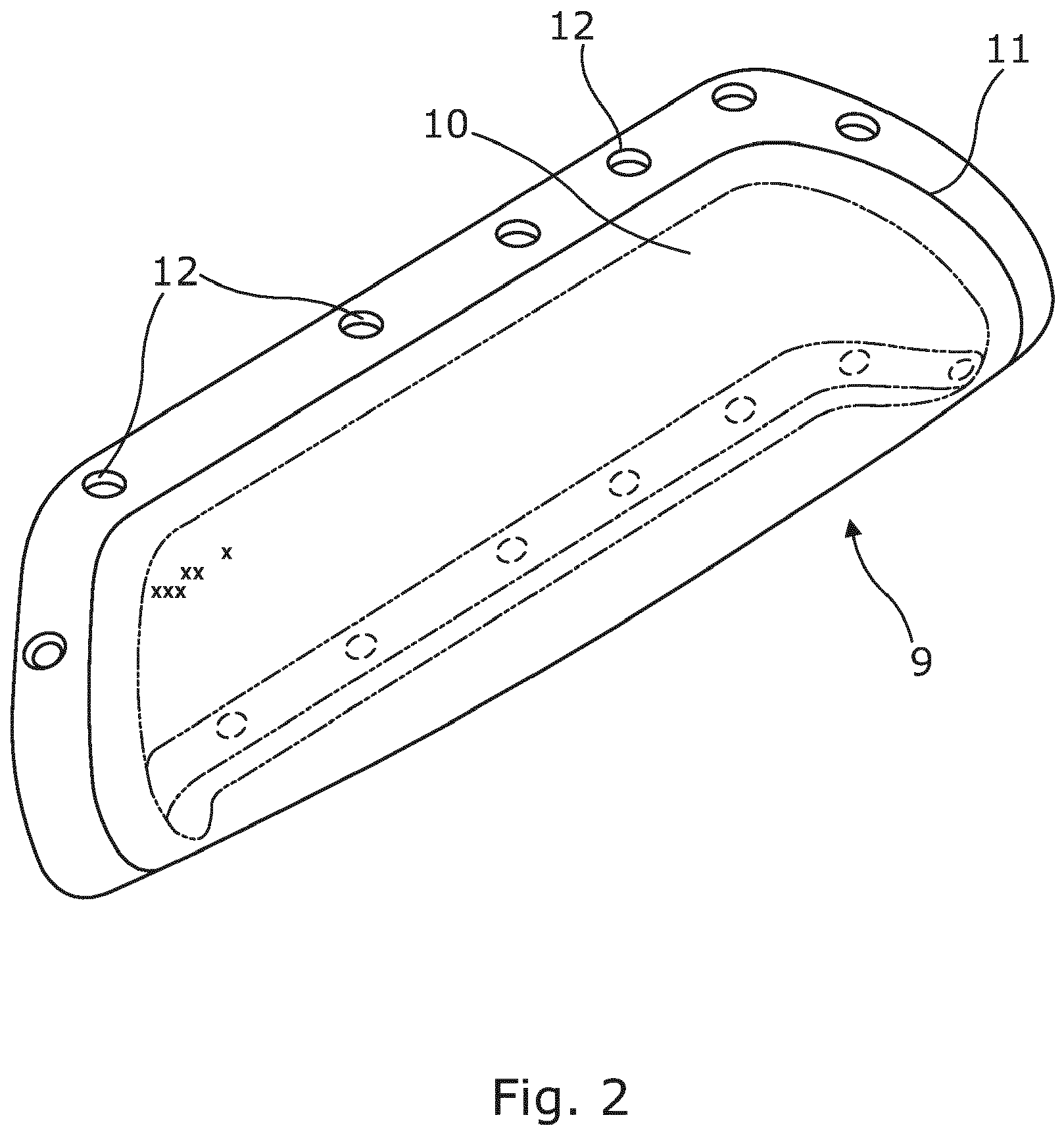 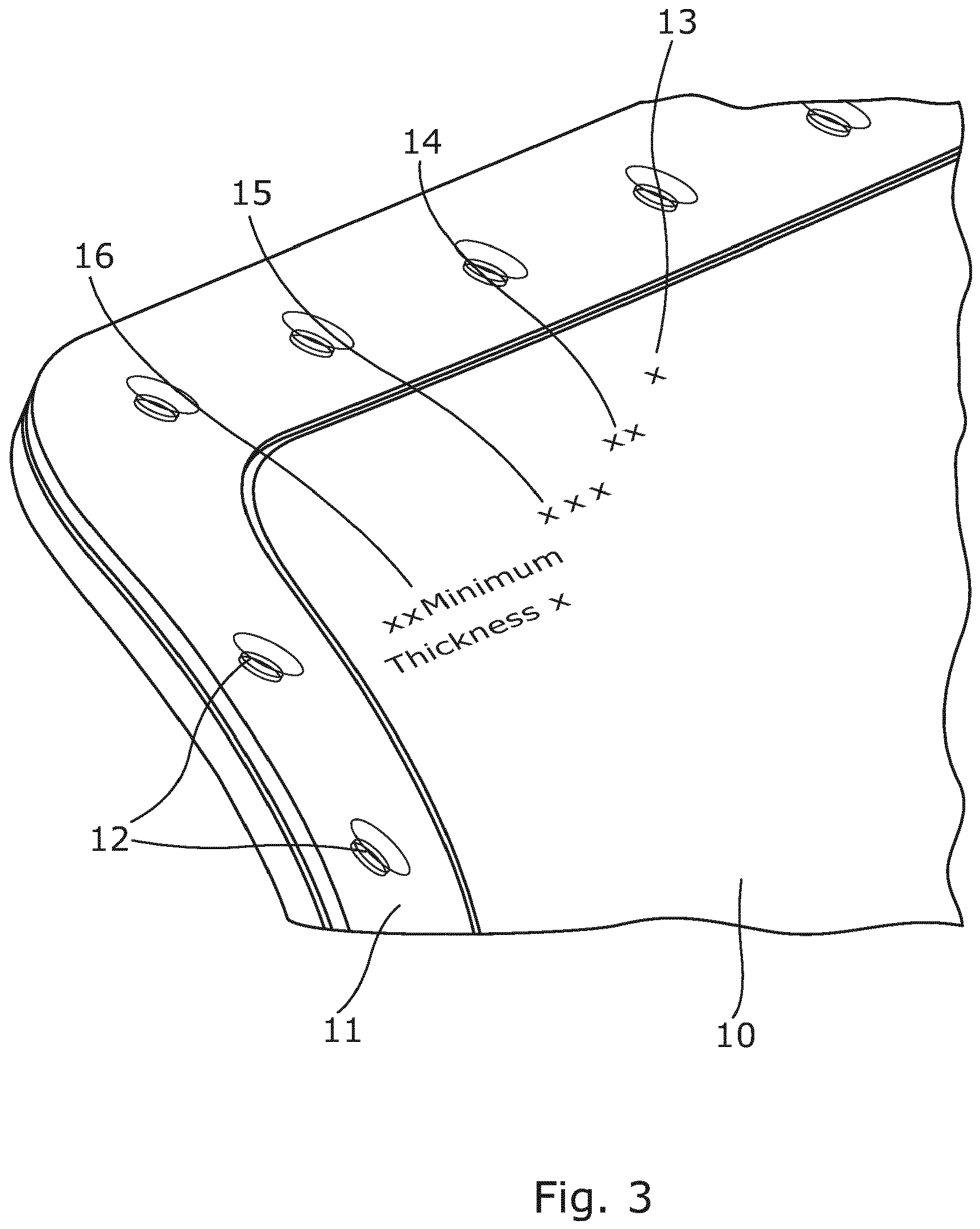 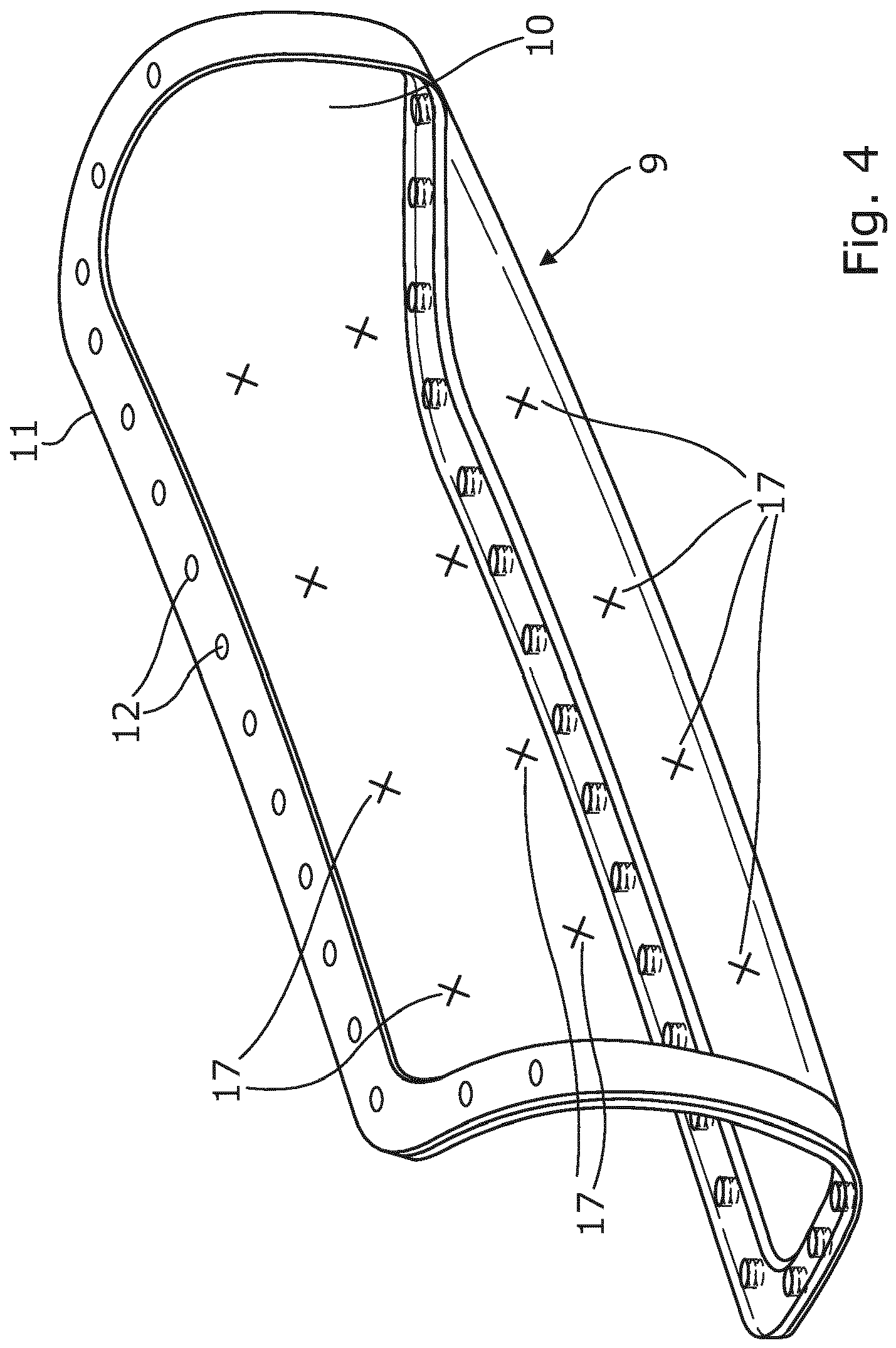 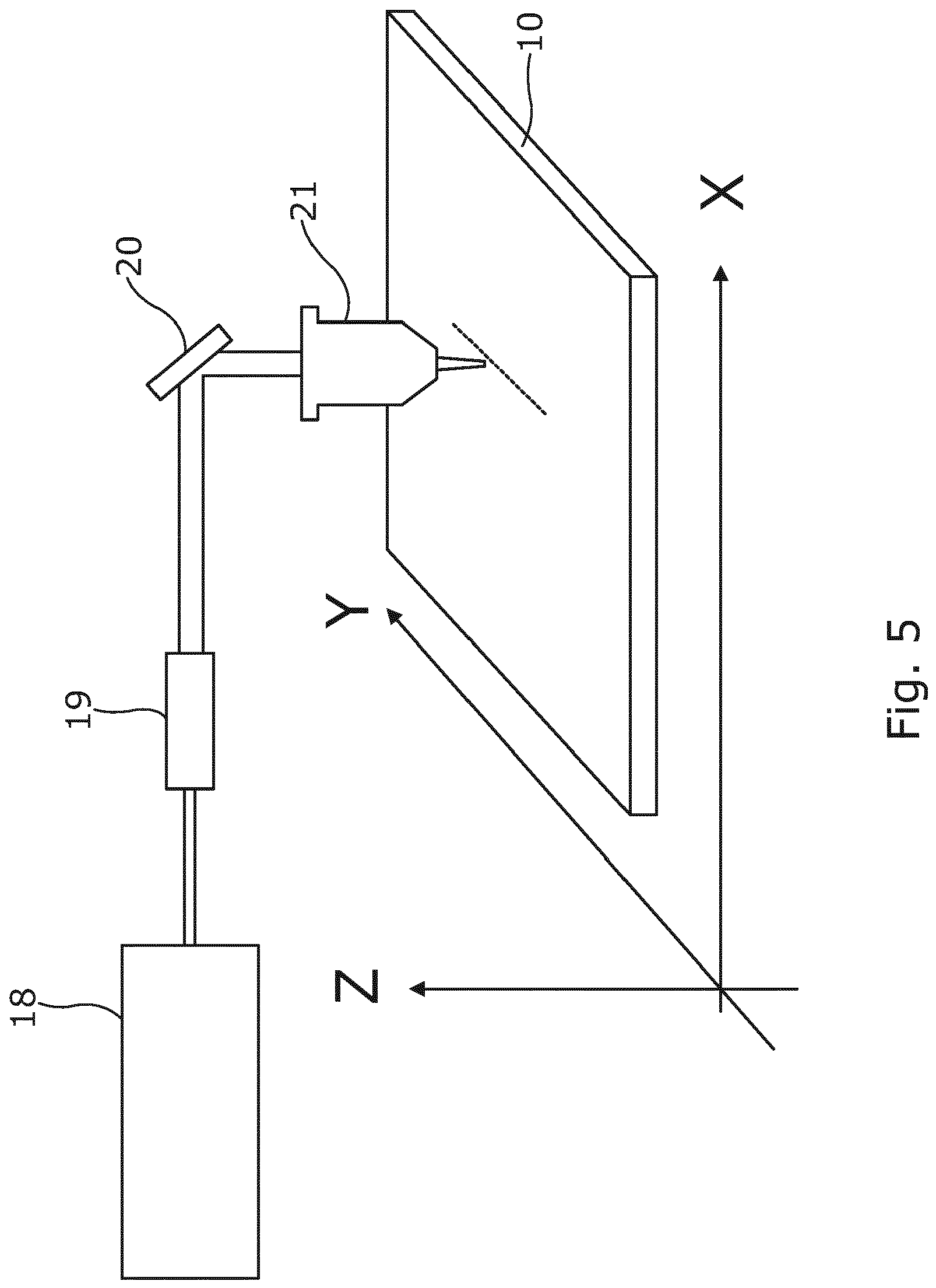 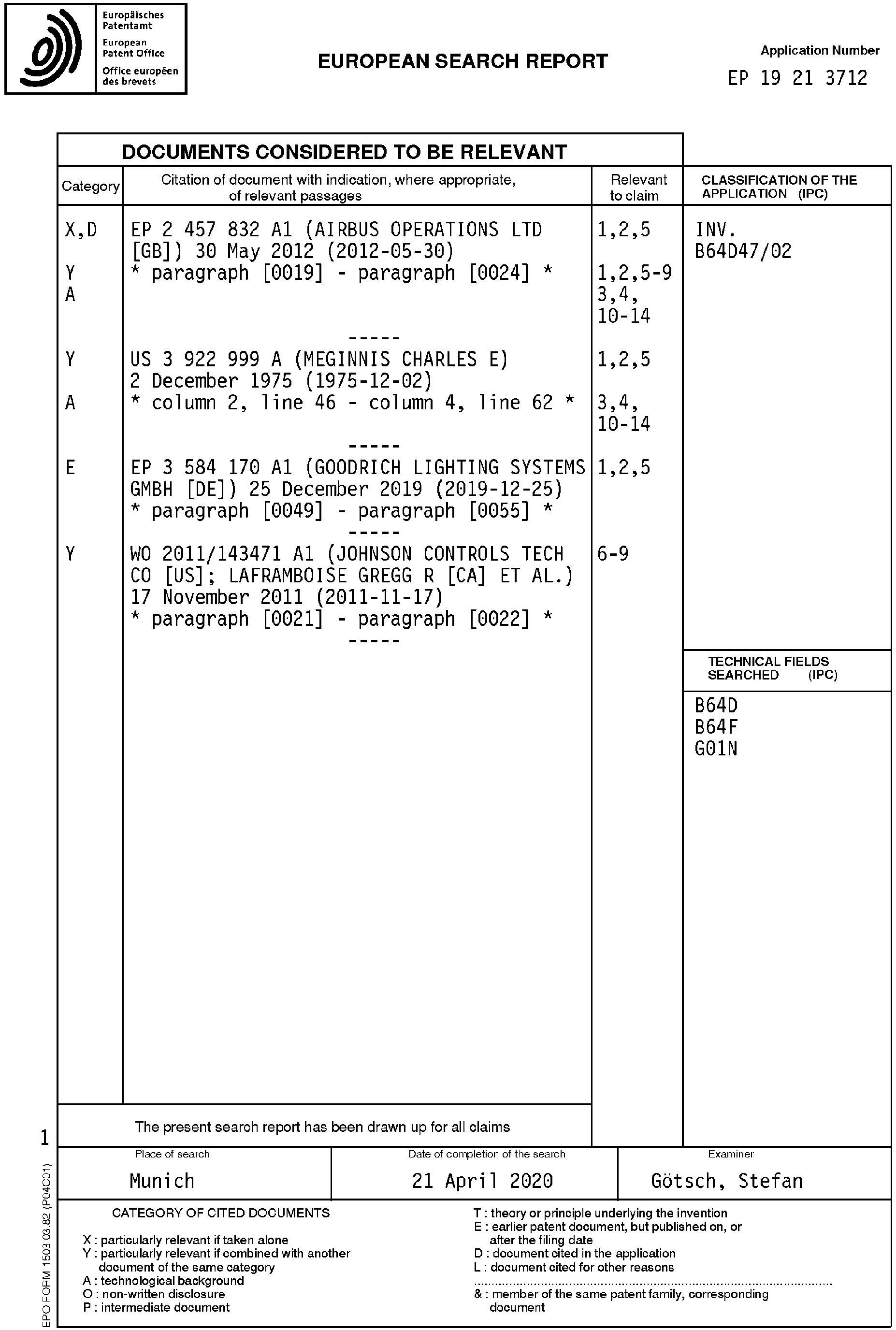 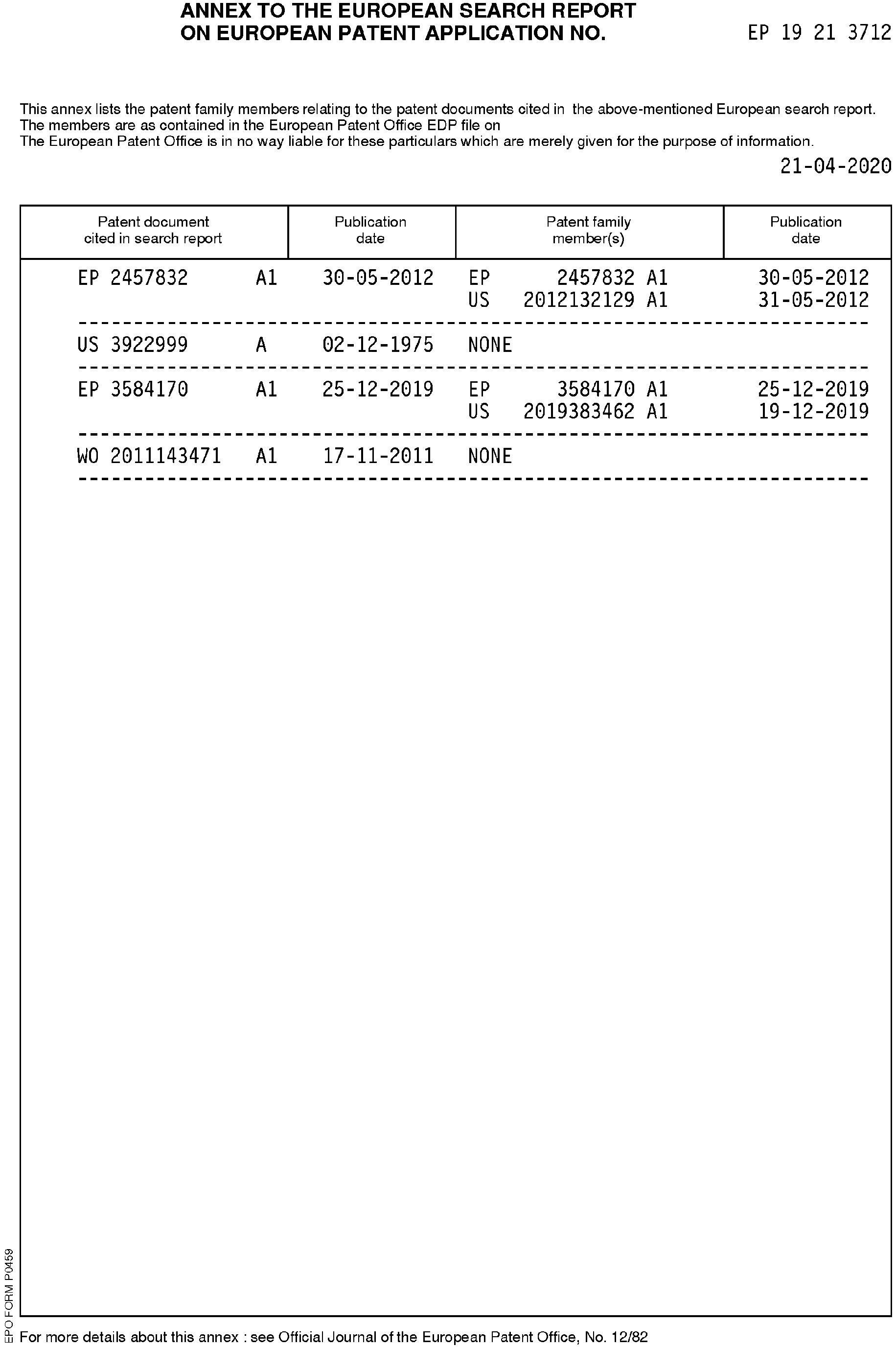