[0001] The present invention relates to a station for the separate collection of waste.
[0002] Nowadays, the issue of collection and management of waste is increasingly often the focus of interest of public opinion, in that it is the crux of a multiplicity of very relevant problems and challenges which are of growing importance for the wider community.
[0003] A major topic among these is the correct destination of the waste, which has seen a considerable development of separate waste collection services, which put citizens in a position to separate their waste, directing each type toward the best-suited treatment for disposal or recovery.
[0004] To this end, municipal authorities have therefore implemented various different strategies in order to facilitate the correct behavior of citizens, which range from placing containers in public areas, such as wheeled bins and bottle banks, which are designed for a single type of waste, to supplying special collection bins for domestic use, and drawing up schedules for different vehicles to visit the area on set days to collect different categories of waste.
[0005] With reference to the containers distributed on the territory (be they wheeled bins or another kind), it is possible to identify some drawbacks that recently, in light of the growing attention toward these issues, have been found to be increasingly unwelcome.
[0006] First of all, it must be noted that the municipal authorities send vehicles to empty the containers placed throughout the territory with predefined regularity, based on statistical calculations and theoretical average values of the filling of the containers by the users.
[0007] Such an arrangement is often found to be inadequate: in those weeks when the users dispose low amounts of waste, the vehicles make trips empty, or in any case they make more trips than necessary (with unnecessary costs). The opposite condition is even more unwelcome: when in fact the waste disposed is more than expected, some users will be forced or tempted to abandon the waste outside the full container, with evident attendant problems.
[0008] Moreover, theoretical values are also what drive the disposal systems, which are activated downstream of the collection activities and which receive the waste from the aforementioned vehicles: again, therefore, the management of masses of waste that differ from what was expected leads to considerable problems.
[0009] It is even more important to note that the disposal of waste in wheeled bins, tanks and other conventional containers is often found to be rather inconvenient, owing to the large dimensions of the containers themselves and of the weight of the door that each user has to lift in order to gain access to the inner collection compartment. Moreover, such doors are often situated at a considerable height from the ground (for example on the top or in any case in the upper part of the containers, which have large dimensions), making them even more complicated to move.
[0010] While such drawbacks might on balance appear to be minor problems for the average user (although not always), they represent obstacles that are insurmountable, or in any case highly unwelcome and now unacceptable, for users with motor disabilities or disabilities of other kinds, who must evidently be assured of the possibility to freely use such services.
[0011] Besides, such need is part of the wider issue of the urban accessibility of services and of their inclusiveness (or inclusion), a term used to identify the extension of the availability and use of structures and services to every citizen or user, independently of the presence of any limiting factors.
[0012] The aim of the present invention is to solve the above mentioned problems, by providing a station that offers practical methods of separate collection and management of waste.
[0013] Within this aim, an object of the invention is to provide a station that enables an optimal coordination of the periodic activities of collection and disposal, as a function of the actual quantity of disposed waste.
[0014] Another object of the invention is to provide a station offering high accessibility and inclusiveness, the use of which is assured to every user, independently of limiting factors or disability.
[0015] Another object of the invention is to provide a station for the separate collection of waste that ensures a high reliability of operation, and which can be used in total safety.
[0016] Another object of the invention is to provide a station that offers practical methods for collecting data relating to waste collection.
[0017] Another object of the invention is to provide a station that adopts an alternative technical and structural architecture to those of conventional stations.
[0018] Another object of the invention is to provide a station that can be easily implemented using elements and materials that are readily available on the market.
[0019] Another object of the invention is to provide a station that is of low cost and safely applied.
[0020] This aim and these and other objects which will become better apparent hereinafter are all achieved by a station according to claim 1.
[0021] Further characteristics and advantages of the invention will become better apparent from the detailed description that follows of a preferred, but not exclusive, embodiment of the station for the separate collection of waste according to the invention, which is illustrated by way of non-limiting example in the accompanying drawings wherein:

Figure 1 is a perspective view of the station according to the invention;

Figures 2 to 5 are cross-sectional views taken along a transverse plane, which schematically show the use of the station in Figure 1.

1. A station for the separate collection of waste (A), which is characterized in that it comprises at least:

- a container (2) provided with doors (3) which are usually maintained in the closed configuration of respective mutually independent inner compartments (4) which are intended for the separate collection of waste (A),

- actuators (6) for the automatic movement of respective said doors (3) from said closed configuration to a temporary open configuration, for free access to the corresponding said compartments (4),

- sensors for measuring the weight of the waste (A) that is progressively disposed in each one of said compartments (4),

- user recognition means, which are configured to recognize the user (B) intending to dispose waste (A) in at least one of said compartments (4),

- an electronic control and management unit, which is configured to receive access to at least one of said compartments (4) and to activate the respective said actuator (6), following the successful recognition of a user (B) by said means. 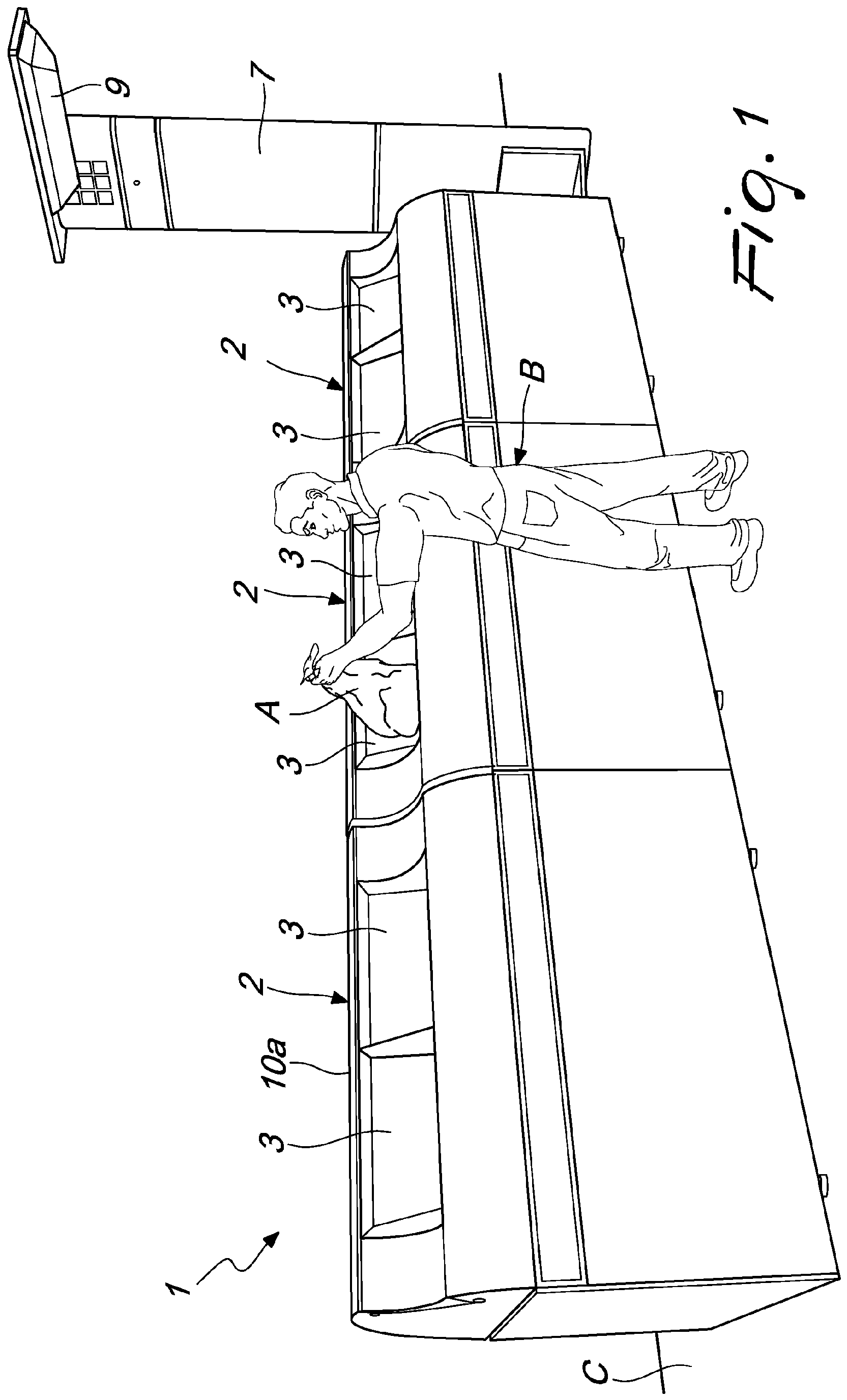 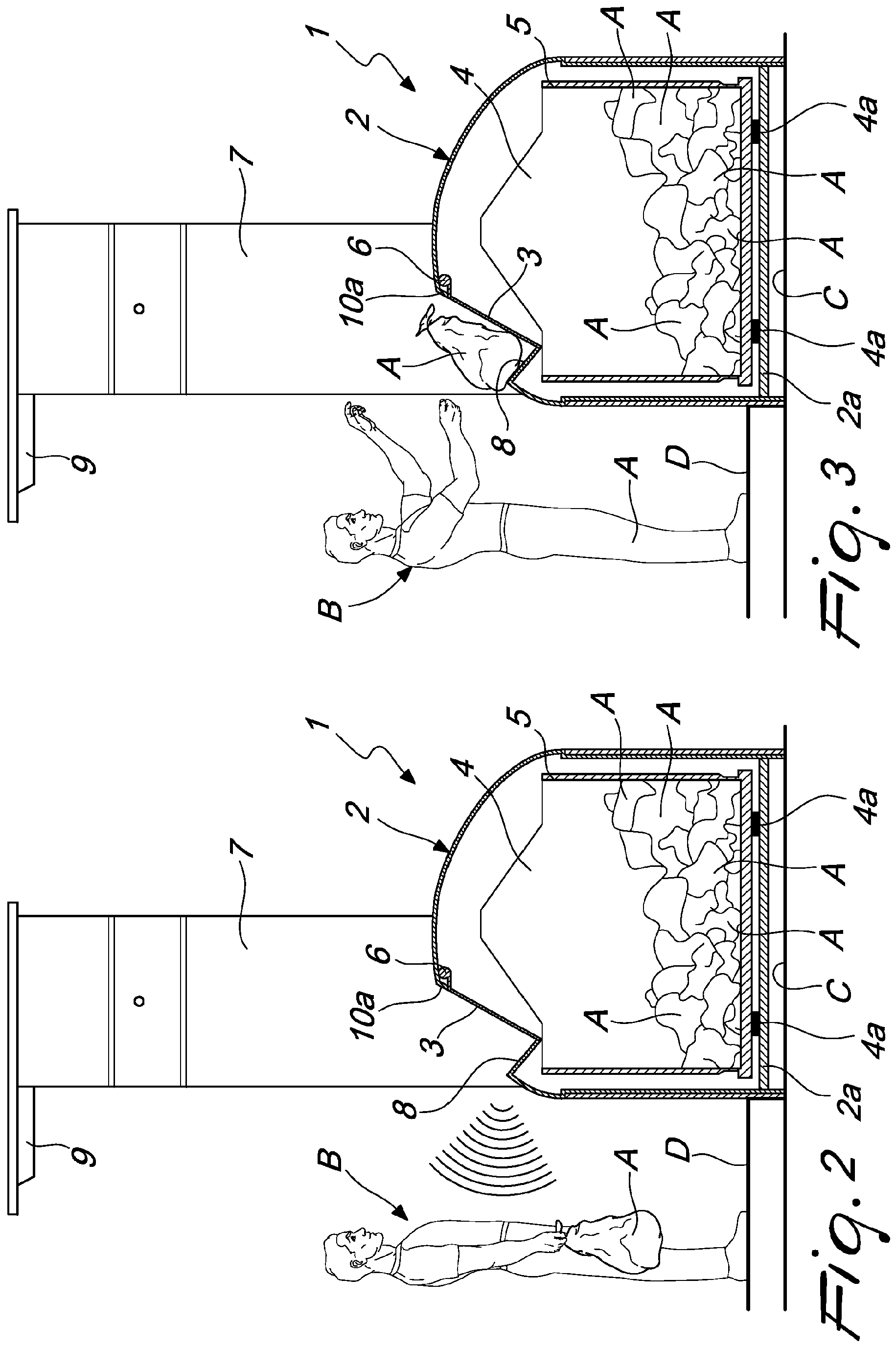 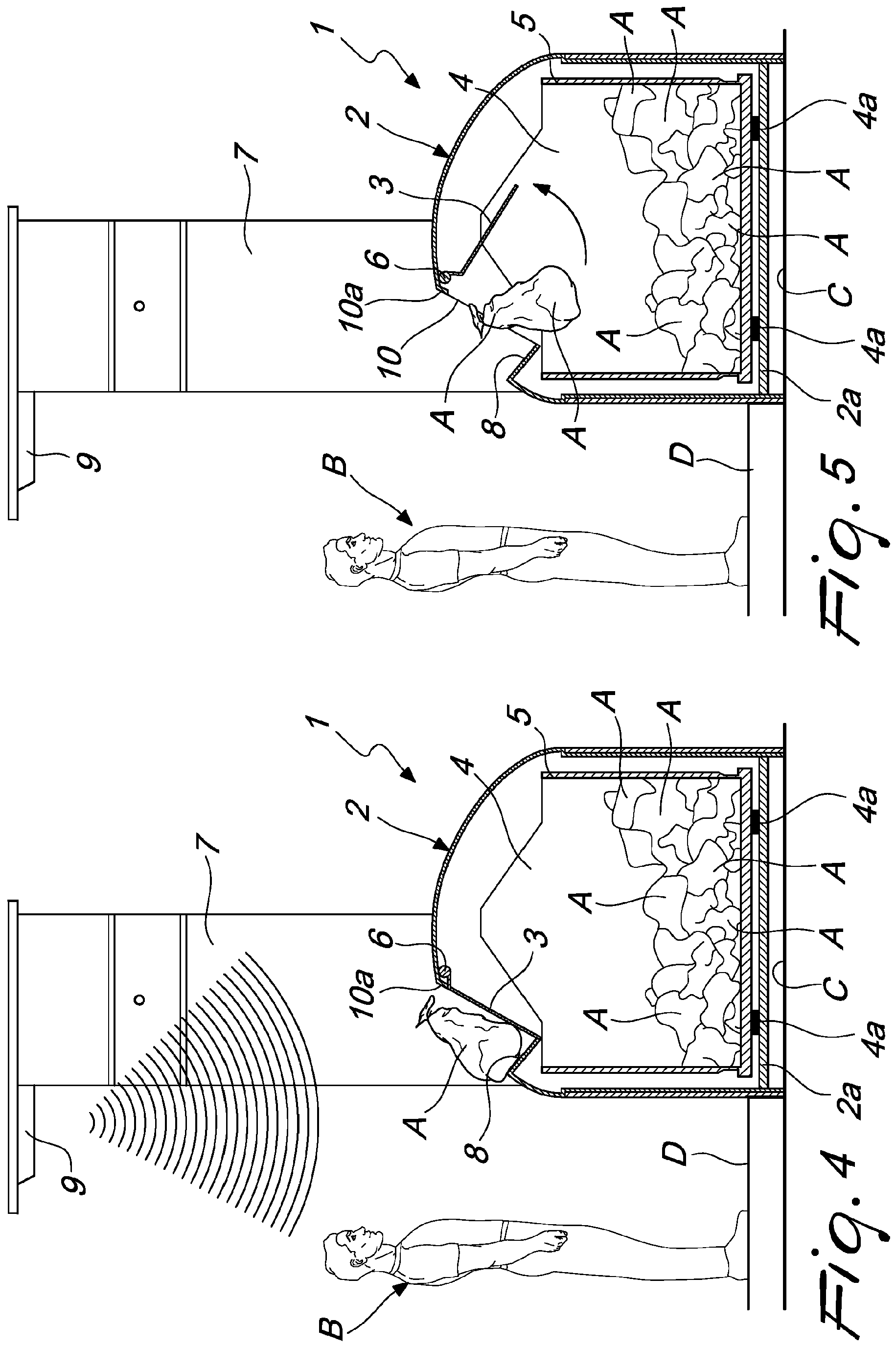 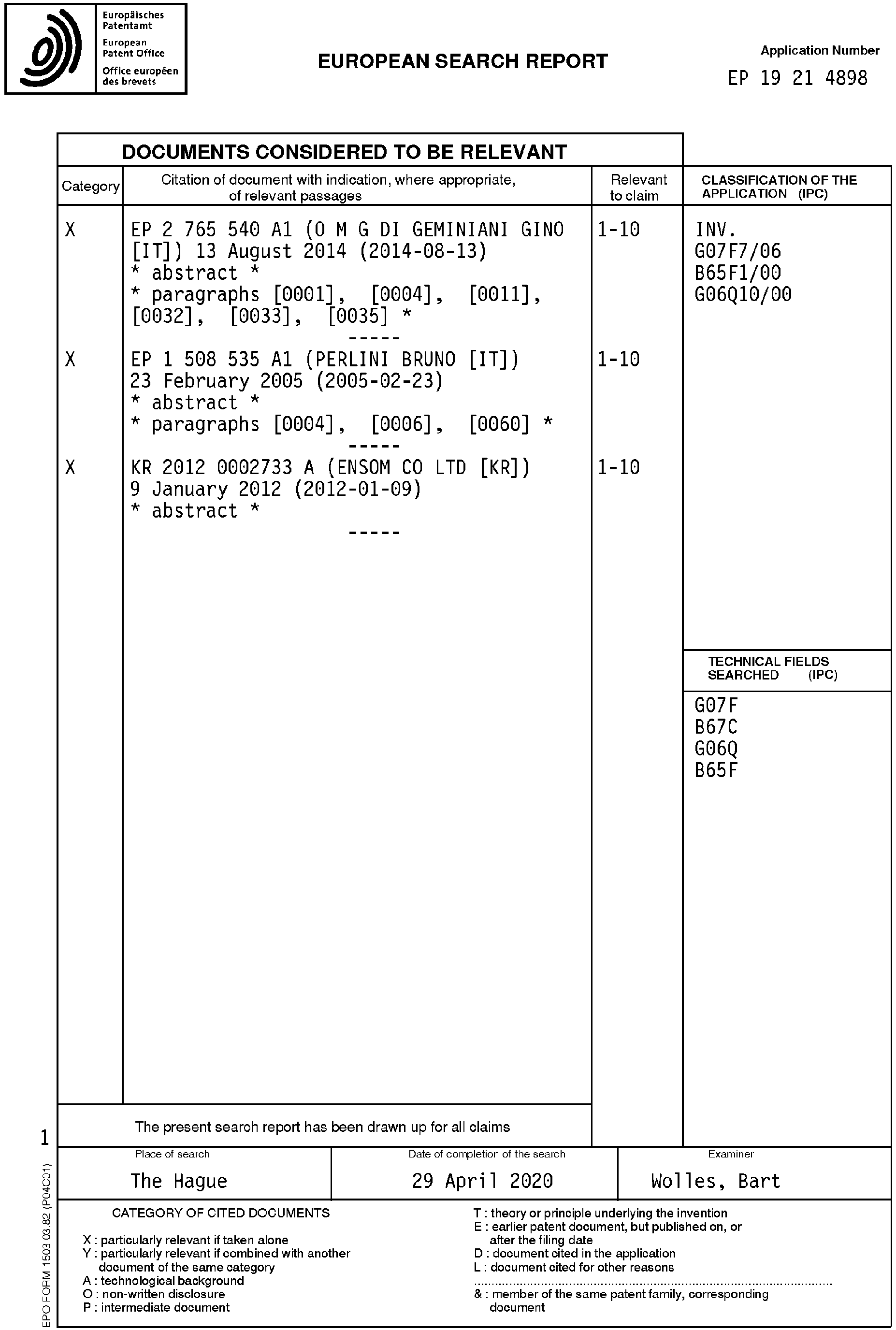 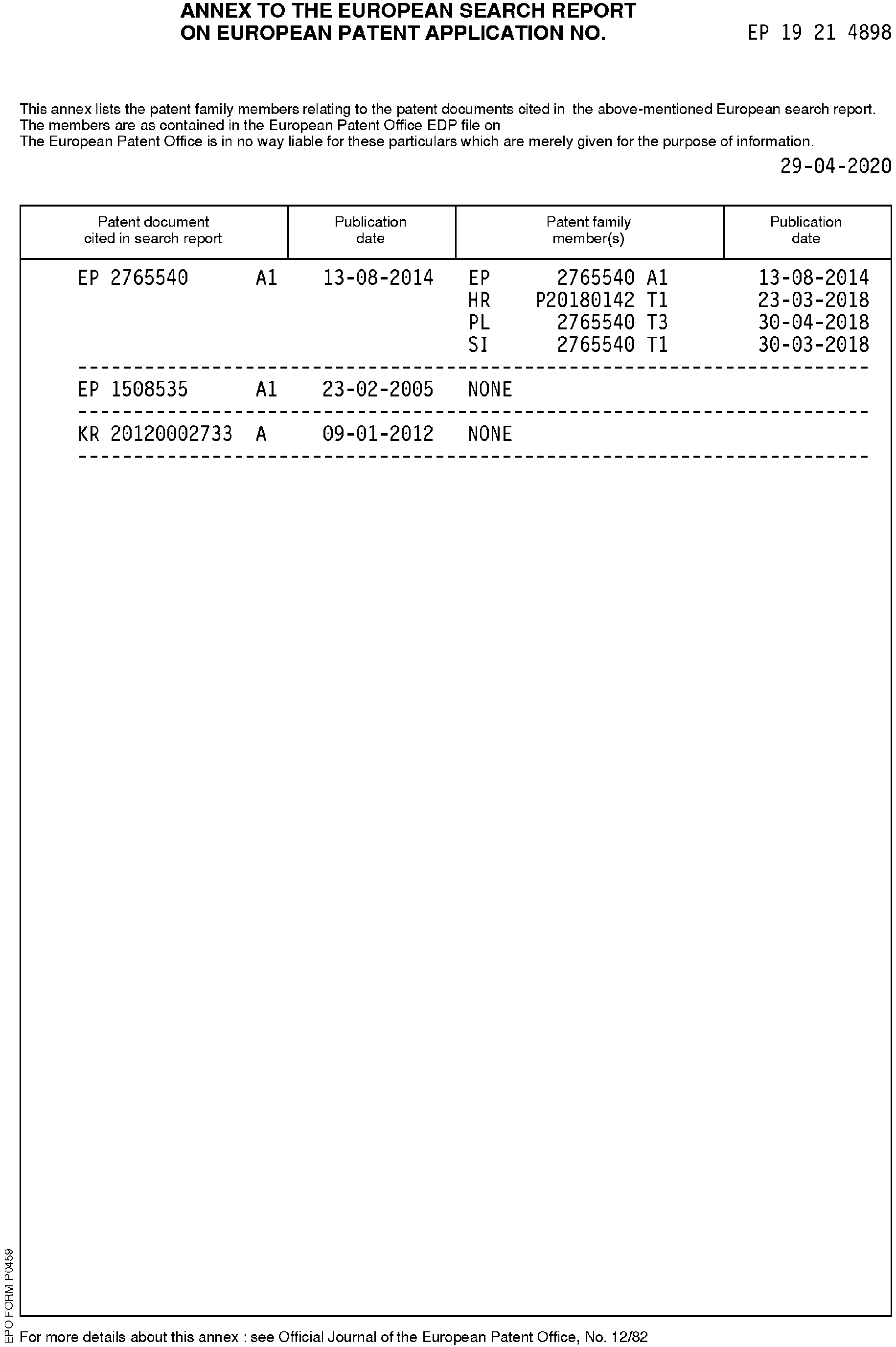