a multipole configured to pass an ion stream, the ion stream comprising an abundance of one or more ion species within stability boundaries defined by (a, q) values;

a processor configured to record and store a pattern of detection of ions in the abundance of ions by the plurality of dynodes in the detector.

Clause 2. The mass spectrometer of clause 1, wherein each of the five dynodes is associated with an charged particle detector.

[0014] For a more complete understanding of the present disclosure, reference is now made to the following descriptions taken in conjunction with the accompanying drawings, in which:

FIG. 2B shows a simulated recorded image of a multiple distinct species of ions as collected at the exit aperture of a quadrupole at a particular instant in time.

FIG. 3 shows a beneficial example configuration of a triple stage mass spectrometer system that can be operated with the disclosed methods.

FIG. 5 shows an example embodiment of a dynode for use in the disclosed ion detector system.

FIGS. 6A and 6B show top and side views respectively of an example of an ion detector system employing three spatial detectors.

FIG. 8 shows an example of a simulated result of the spatial ion detection system of the present invention.

[0015] In the description herein, it is understood that a word appearing in the singular encompasses its plural counterpart, and a word appearing in the plural encompasses its singular counterpart, unless implicitly or explicitly understood or stated otherwise. Furthermore, it is understood that for any given component or embodiment described herein, any of the possible candidates or alternatives listed for that component may generally be used individually or in combination with one another, unless implicitly or explicitly understood or stated otherwise. Moreover, it is to be appreciated that the figures, as shown herein, are not necessarily drawn to scale, wherein some of the elements may be drawn merely for clarity of the disclosure. Also, reference numerals may be repeated among the various figures to show corresponding or analogous elements. Additionally, it will be understood that any list of such candidates or alternatives is merely illustrative, not limiting, unless implicitly or explicitly understood or stated otherwise. In addition, unless otherwise indicated, numbers expressing quantities of ingredients, constituents, reaction conditions and so forth used in the specification and claims are to be understood as being modified by the term "about."
[0016] Accordingly, unless indicated to the contrary, the numerical parameters set forth in the specification and attached claims are approximations that may vary depending upon the desired properties sought to be obtained by the subject matter presented herein. At the very least, and not as an attempt to limit the application of the doctrine of equivalents to the scope of the claims, each numerical parameter should at least be construed in light of the number of reported significant digits and by applying ordinary rounding techniques. Notwithstanding that the numerical ranges and parameters setting forth the broad scope of the subject matter presented herein are approximations, the numerical values set forth in the specific examples are reported as precisely as possible. Any numerical values, however, inherently contain certain errors necessarily resulting from the standard deviation found in their respective testing measurements.

THE EFFECT OF RAMP SPEED

[0056] As discussed above, as the RF and DC amplitudes are ramped linearly in time, the a, q values for each ion each increase linearly with time, as shown above in FIG. 2A. Alternatively, the RF and DC amplitudes can be ramped exponentially with mass, such that the scan rate is proportional to the mass. Specifically, the ions in traversing the length of a quadrupole undergo a number of RF cycles during this changing condition and as a consequence, such ions experience a changing beta during the ramping of the applied voltages. Accordingly, the exit position for the ions after a period of time change as a function of the ramp speed in addition to other aforementioned factors. Moreover, in a conventional selective mass filter operation, the peak shape is negatively affected by ramp speed because the filter's window at unit mass resolving power shrinks substantially and the high and low mass cutoffs become smeared. A user of a conventional quadrupole system in wanting to provide selective scanning (e.g., unit mass resolving power) of a particular desired mass often configures his or her system with chosen a:q parameters and then scans at a predetermined discrete rate, e.g., a scan rate at about 500 (AMU /sec) to detect the signals.
[0057] However, while such a scan rate and even slower scan rates can also be utilized herein to increase desired signal to noise ratios, the disclosed systems and methods can also optionally increase the scan velocity up to about 10,000 AMU /sec and even up to about 100,000 AMU /sec as an upper limit because of the wider stability transmission windows and thus the broader range of ions that enable an increased quantitative sensitivity. Benefits of increased scan velocities include decreased measurement time frames, as well as operating the disclosed system in cooperation with survey scans, wherein the a: q points can be selected to extract additional information from only those regions (i.e., a target scan) where the signal exists so as to also increase the overall speed of operation.

GENERAL DISCUSSION OF THE DATA PROCESSING

[0089] As one embodiment, the system can be operated in MS1 "full scan" mode, in which an entire mass spectrum is acquired, e.g., a mass range of 1000 Da or more. In such a configuration, the scan rate can be reduced to enhance sensitivity and mass resolving power (MRP) or increased to improve throughput. Because the disclosed system provides for high MRP at relatively high scan rates, it is possible that scan rates are limited by the time required to collect enough ions, despite the improvement in duty cycle over conventional methods and instruments.
[0090] Other embodiments can also be operated in a "selected ion mode" (SIM) in which one or more selected ions are targeted for analysis. Conventionally, a SIM mode, as stated previously, is performed by parking the quadrupole, i.e. holding U and V fixed. By contrast, the disclosed system scans U and V rapidly over a narrow mass range, and using wide enough stability limits so that transmission is about 100%. In selected ion mode, sensitivity requirements often dictate the length of the scan. In such a case, a very slow scan rate over a small m/z range can be chosen to maximize MRP. Alternatively, the ions can be scanned over a larger m/z range, i.e. from one stability boundary to the other, to provide a robust estimate of the position of the selected ion.
[0091] As also stated previously, hybrid modes of MS1 operation can be implemented in which a survey scan for detection across the entire mass spectrum is followed by multiple target scans to hone in on features of interest. Target scans can be used to search for interfering species and/or improve quantification of selected species. Another possible use of the target scan is elemental composition determination. For example, the quadrupole can target the "A1" region, approximately one Dalton above the monoisotopic ion species to characterize the isotopic distribution. For example, with an MRP of 160k at m/z 1000, it is possible to resolve C-13 and N-15 peaks, separated by 6.3 mDa. The abundances of these ions provide an estimate of the number of carbons and nitrogens in the species. Similarly, the A2 isotopic species can be probed, focusing on the C-13, S-34 and O-18 species.
[0092] In a triple quadrupole configuration, the position-sensitive detector, as described above, can be placed at the exit of Q3. The other two quadrupoles, Q1 and Q2, are operated in a conventional manner, i.e., as a precursor mass filter and collision cell, respectively. To collect MS1 spectra, Q1 and Q2 allow ions to pass through without mass filtering or collision. To collect and analyze product ions, Q1 can be configured to select a narrow range of precursor ions (i.e. 1 Da wide mass range), with Q2 configured to fragment the ions, and Q3 configured to analyze the product ions.
[0093] Q3 can also be used in full-scan mode to collect (full) MS/MS spectra at 100 Hz with 10k MRP at m/z 1000, assuming that the source brightness is sufficient to achieve acceptable sensitivity for 1 ms acquisition. Alternatively, Q3 can be used in SIM mode to analyze one or more selected product ions, i.e., single reaction monitoring (SRM) or multiple reaction monitoring (MRM). Sensitivity can be improved by focusing the quadrupole on selected ions, rather than covering the whole mass range.
[0094] It is to be understood that features described with regard to the various embodiments herein may be mixed and matched in any combination without departing from the spirit and scope of the disclosure. Although different selected embodiments have been illustrated and described in detail, it is to be appreciated that they are exemplary, and that a variety of substitutions and alterations are possible without departing from the spirit and scope of the present disclosure.

a multipole configured to pass an ion stream, the ion stream comprising an abundance of one or more ion species within stability boundaries defined by (a, q) values;

a processing means configured to record and store a pattern of detection of ions in the abundance of ions by the dynodes in the detector.

operating a multipole to pass an ion stream, the ion stream comprising an abundance of one or more ion species within stability boundaries defined by (a, q) values;

storing a pattern of detection of ions in the abundance of ions by the dynodes in the detector. 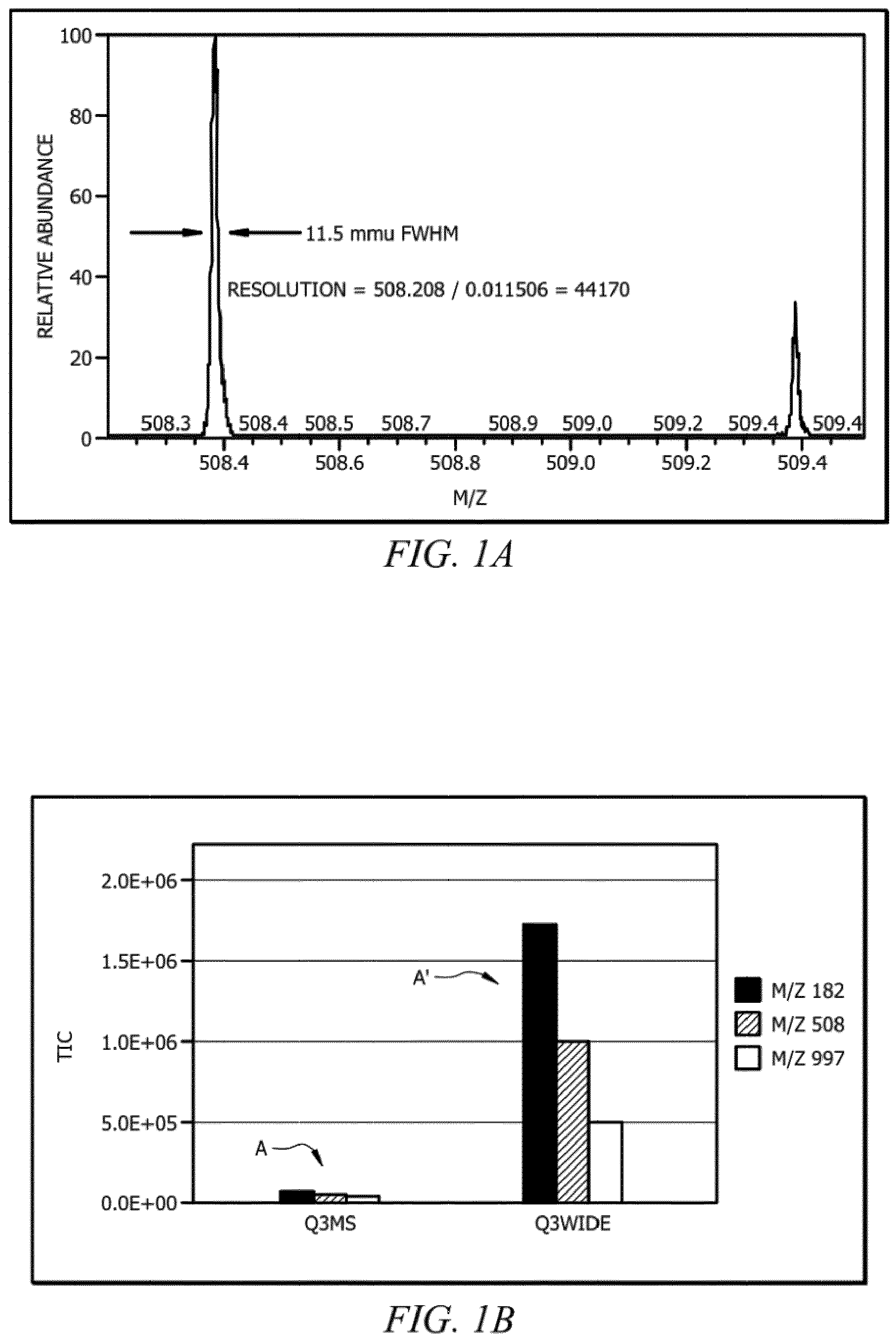 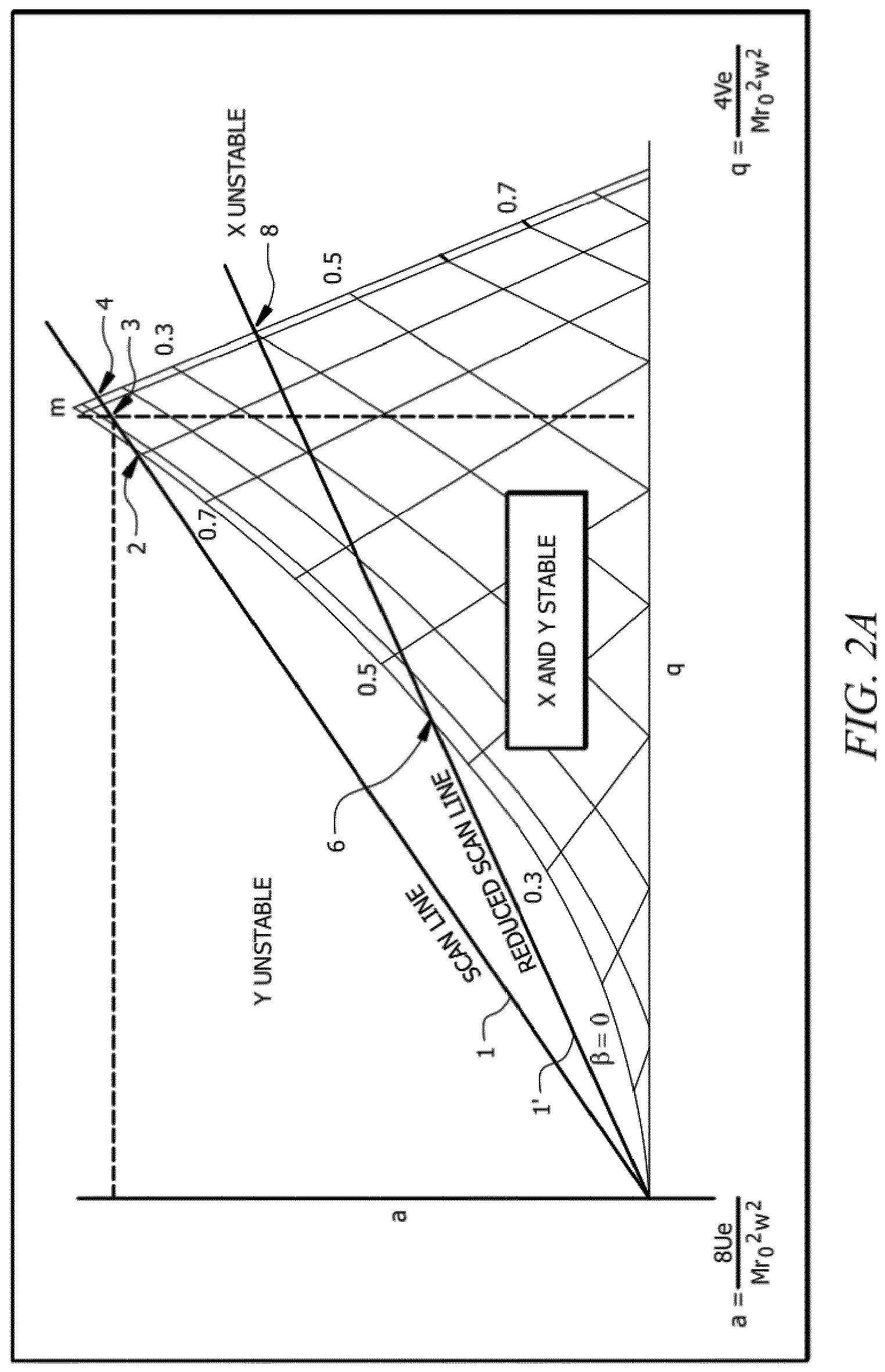 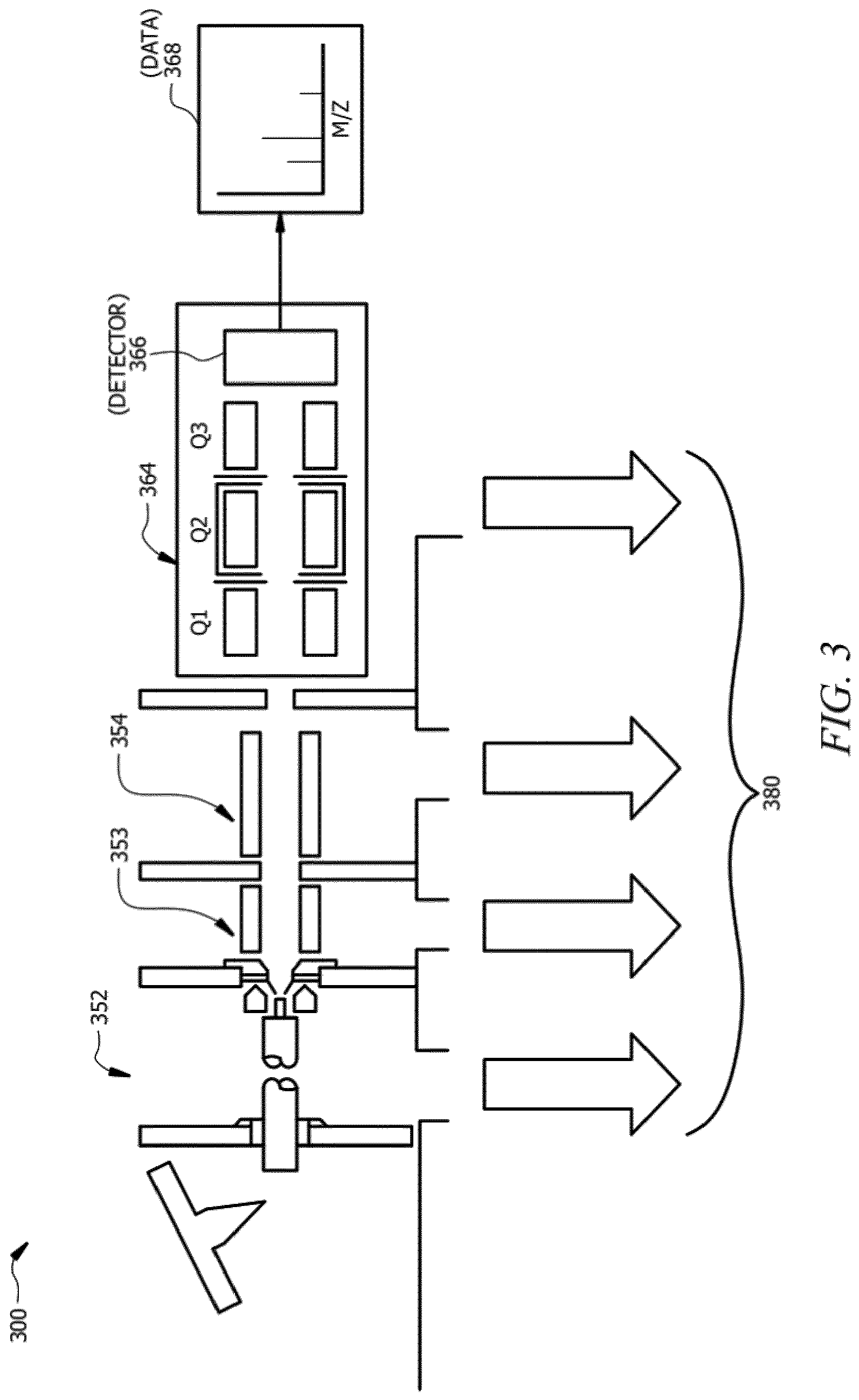 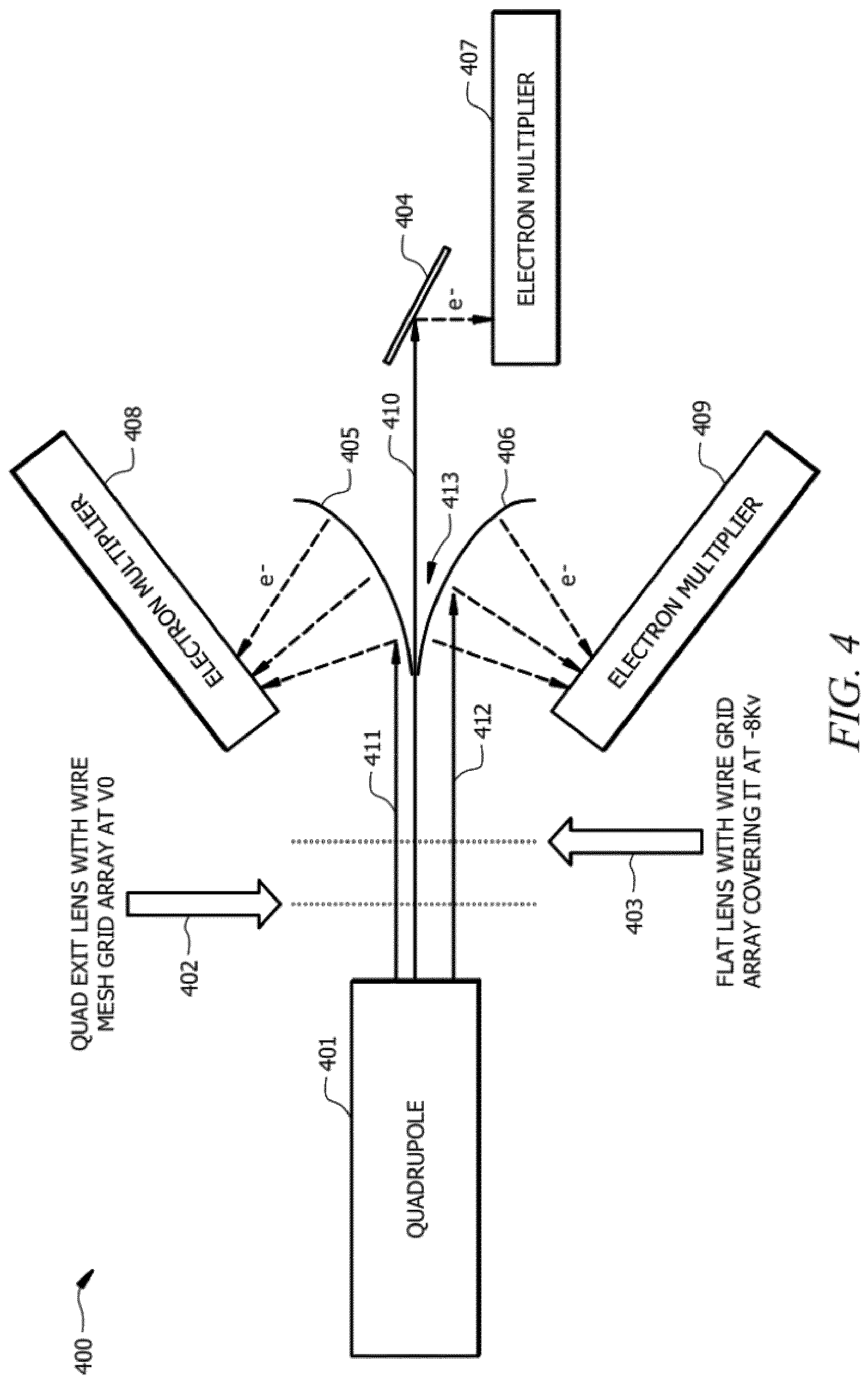 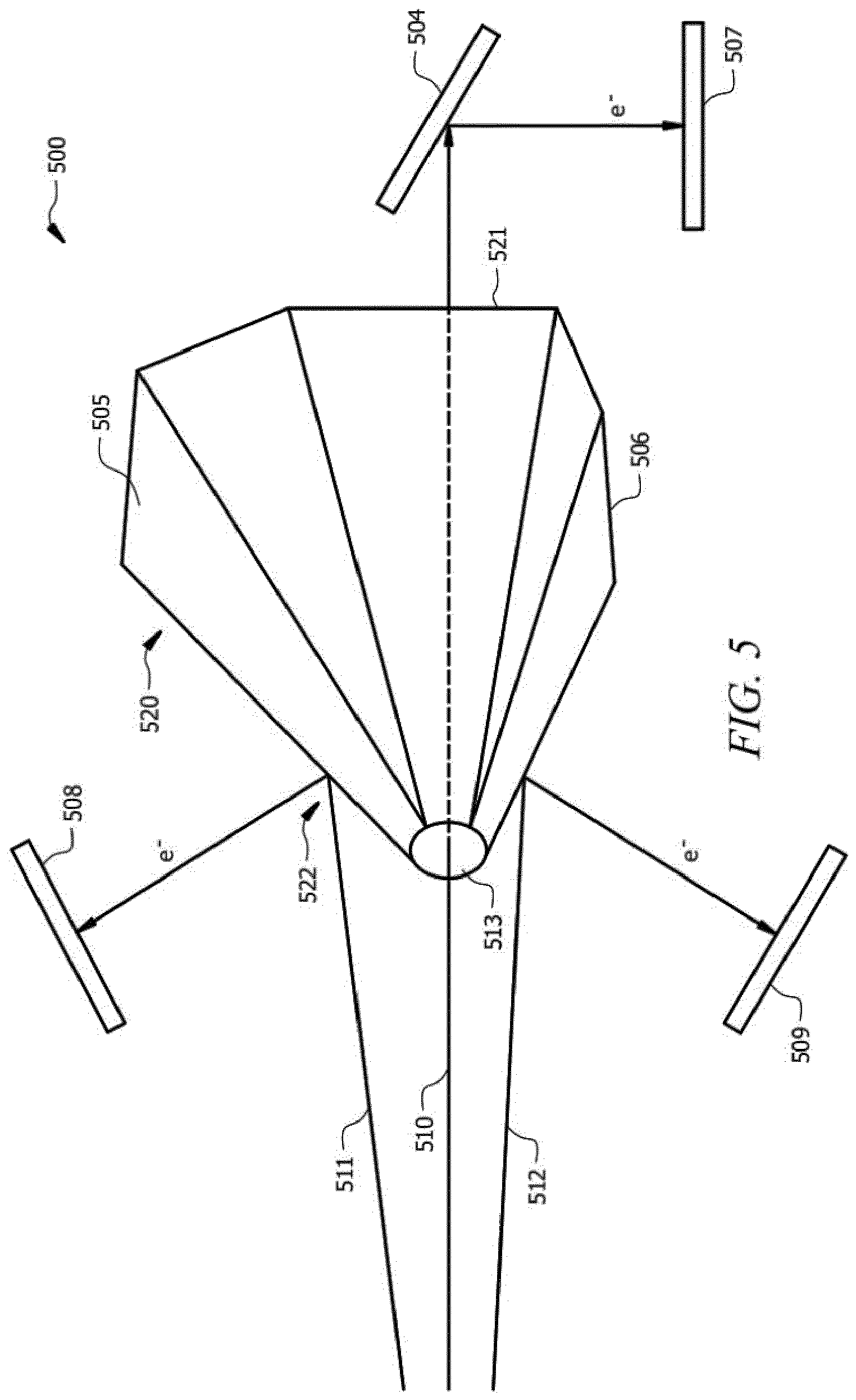 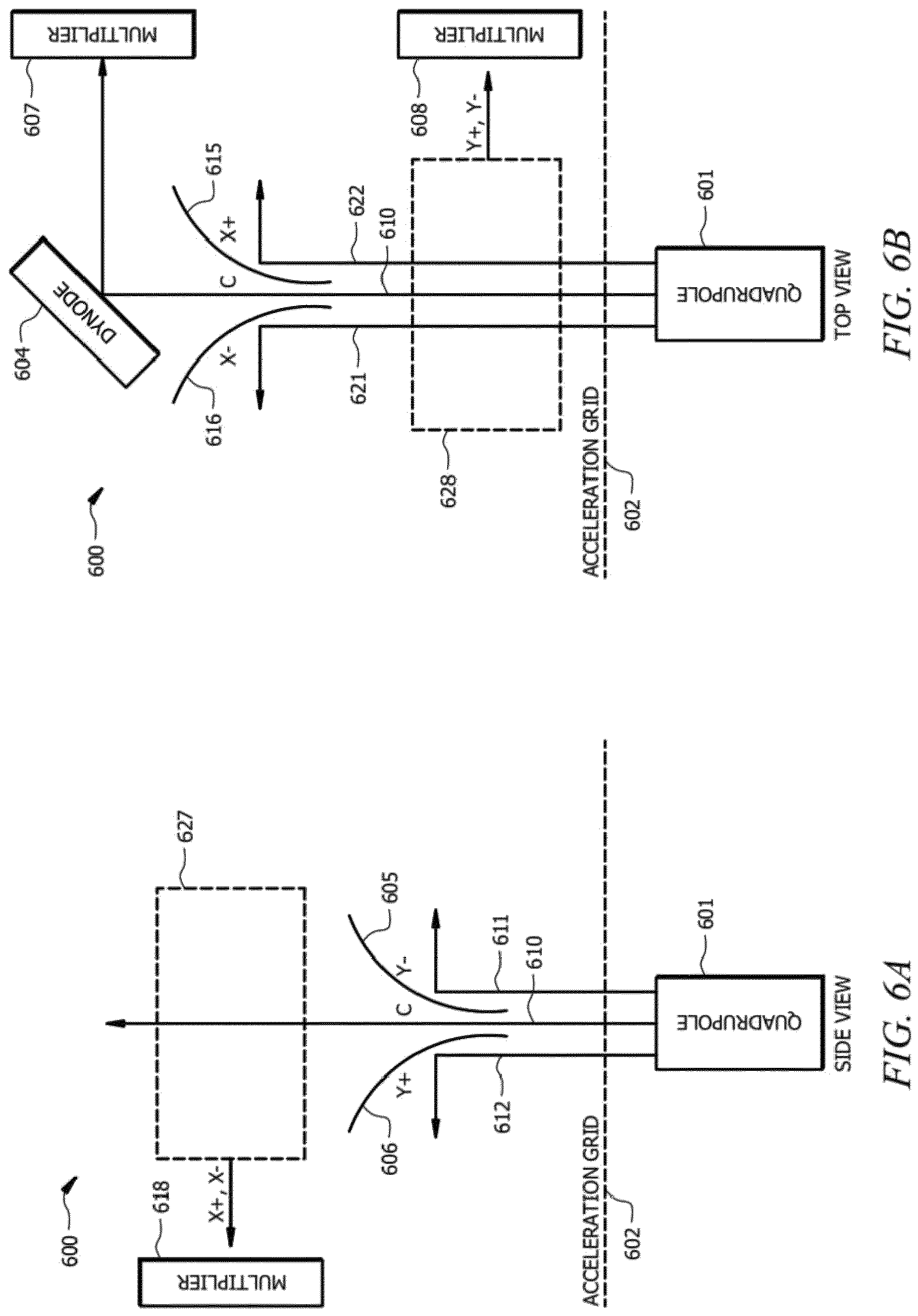 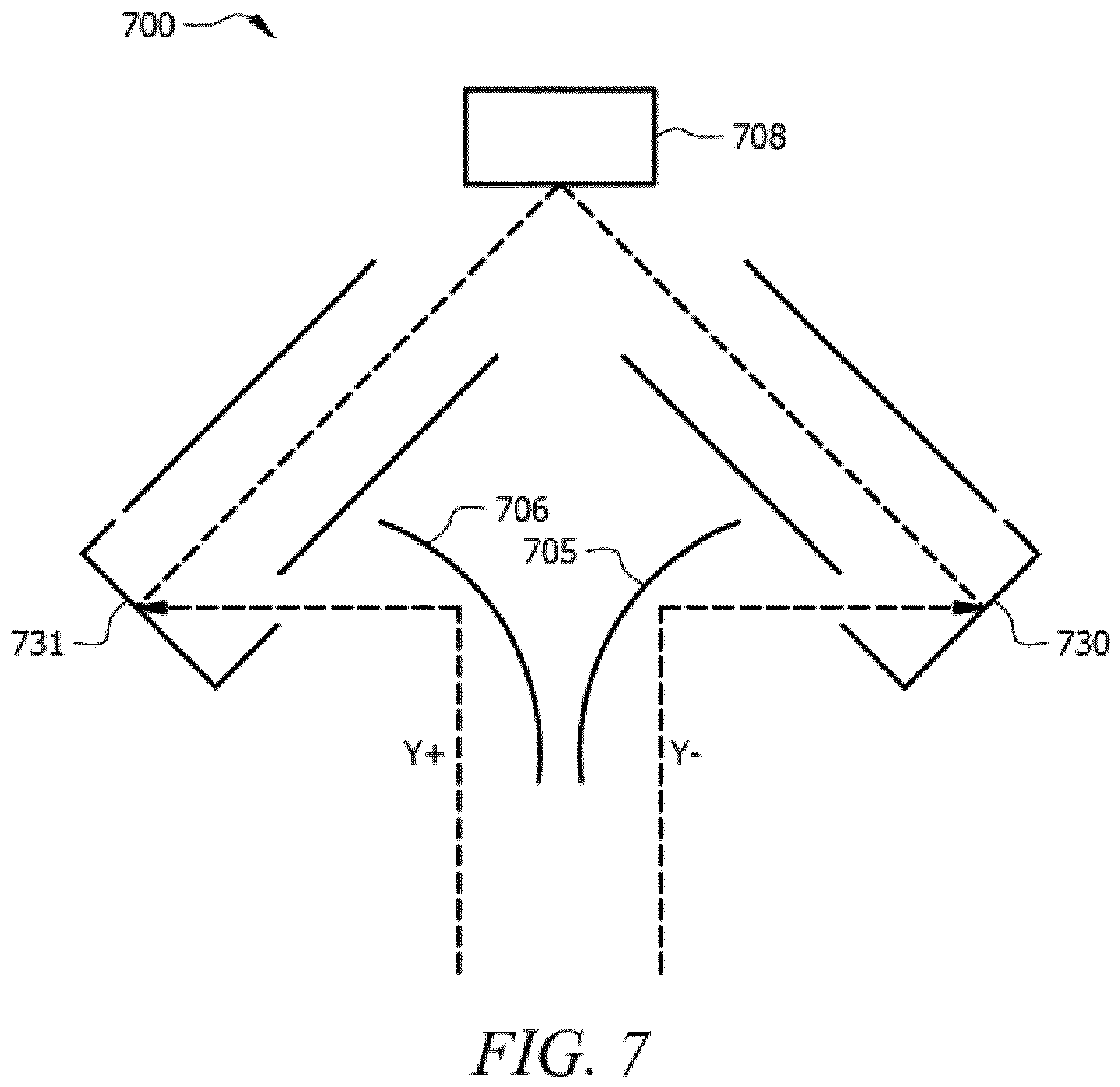 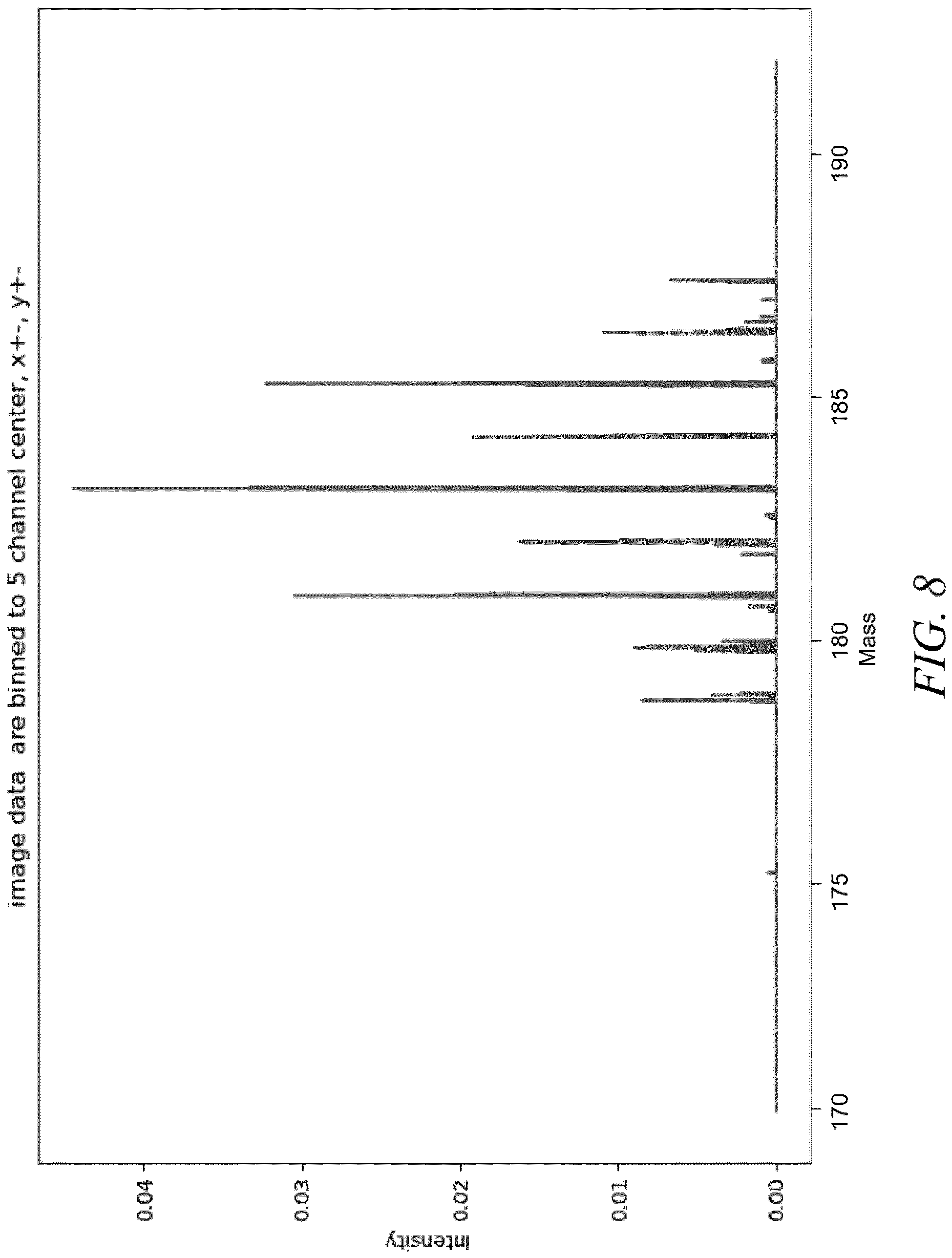 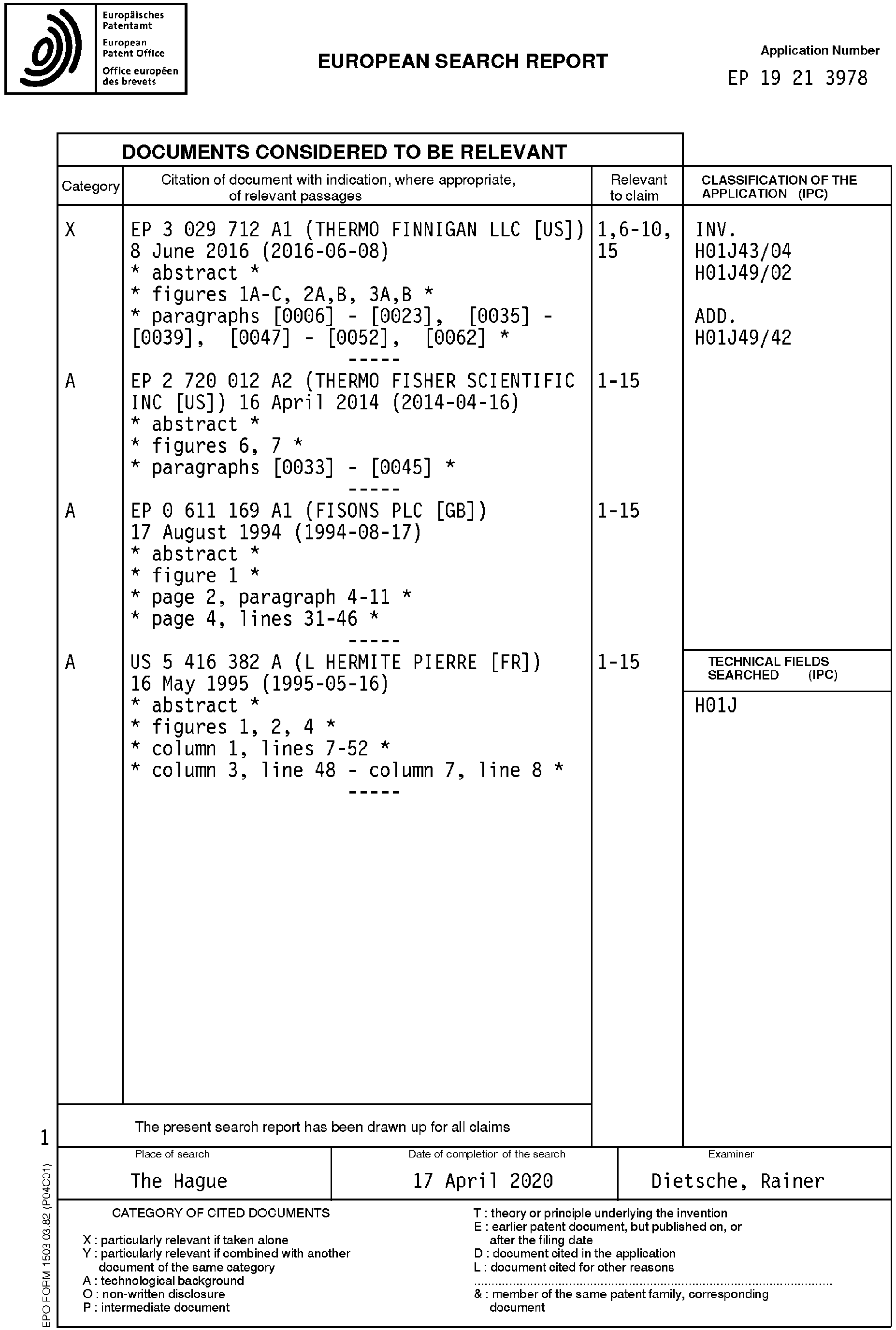 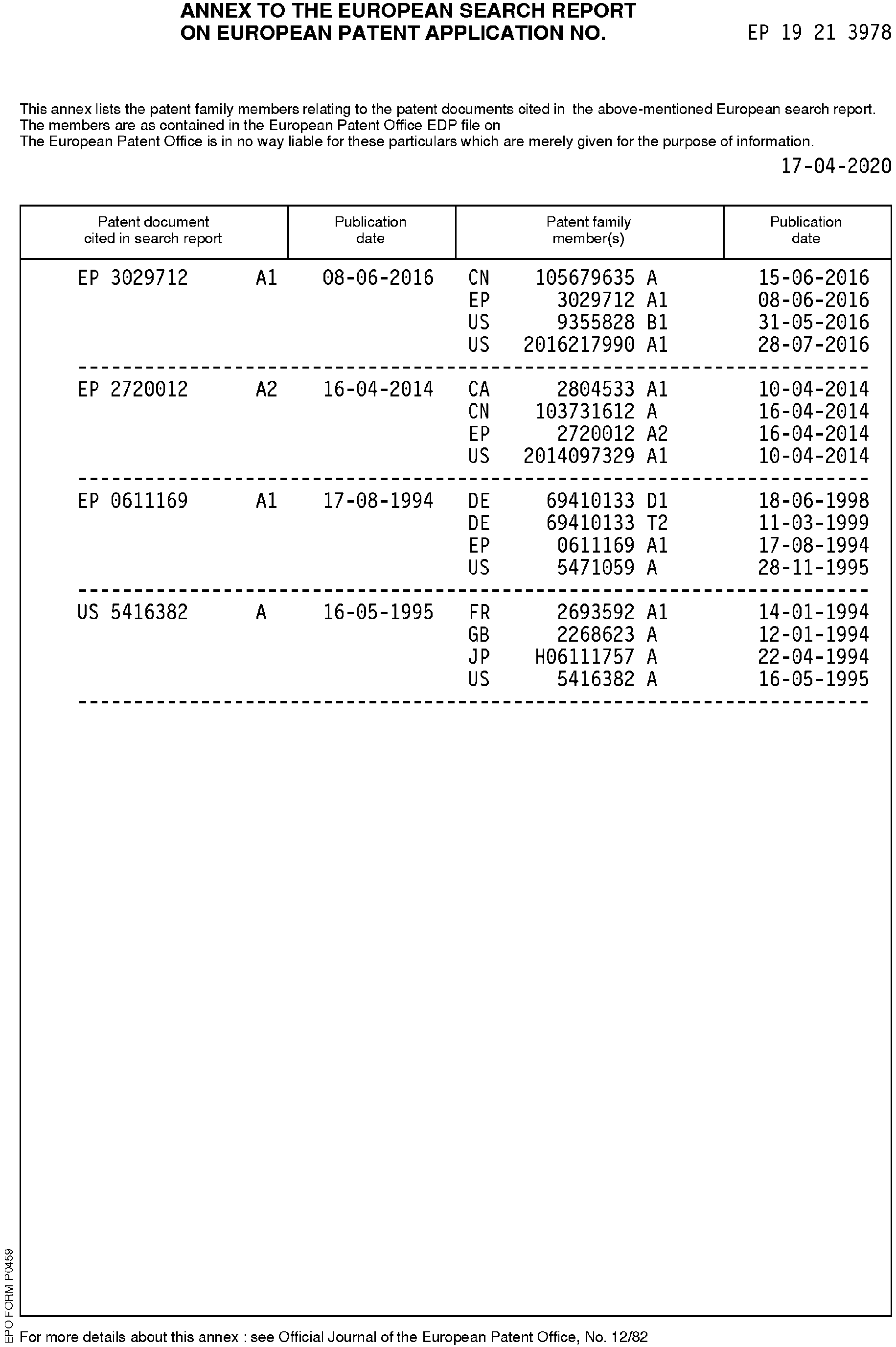