[0001] The invention herein proposed belongs to the sector relating to everyday necessities of life, in the chapter on health and protection in reference to medical sciences and hygiene, involved directly in the clinical and pharmaceutical industry concerning the manufacture of accessories for ancillary garments for sick people, the elderly, and children.

[0002] Urinary incontinence is a health-related aspect that usually affects small children, children suffering enuresis, the elderly, or dependants or people hospitalised in clinics with mobility issues due to a number of causes.
[0003] To prevent its harmful effects on the body, clothes, or, where appropriate, bedding, the most common solution is the use of single-use nappies, sanitary towels, or absorbent garments which are disposed of once they get wet. Although nappies with a high absorption capacity to reduce as much as possible the action of urine on skin, particularly in the case of very small children and the elderly are currently being made, it is always advisable to detect as quickly as possible when a nappy is wet in order to replace it with a clean, dry one for basic hygienic reasons.
[0004] It is understood that when the person wearing a nappy does not have the ability to inform someone that it needs to be changed, there is a need to come up with suitable means generating the proper warning so that this person's caregiver can provide the attention required in such situation.
[0005] In that sense, several solutions registered in patent offices that solve the problem being contemplated are known. Several very similar solutions are mentioned below:
[0006] The first example describes an electronic diaper with a sensor and controller detecting the dampness in the diaper and giving a warning by means of an LED lamp or an acoustic alarm. It is complemented with a timer in order to know how much time has gone by since the wetting of the diaper until the caregiver changes it.
[0007] The second example describes a type of diaper with a sensing line incorporated in the absorption layer which ends in a bag in which a detector is introduced. By changing the impedance of the line, a light, acoustic, or vibratory warning signal is generated. The sensor is reusable.
[0008] Lastly, the third example shows a solution consisting of a strip of two conductors incorporated in the diaper. The sensor is connected at the ends of the strip, detecting changes in the resistor or in the capacitive value between conductors, activating the warning signal. When the diaper is changed, the sensor is retrieved and the diaper is disposed of with the strip.
[0009] The three solutions are very similar, as they correspond to the specific case of urine detection by means of special diapers incorporating sensing lines.
[0010] In view of these background documents, the inventor has devised the device described here, having a simple composition, very positive practical results, and an affordable price for most economies, making it an interesting novel invention with a high potential for its future distribution and marketing. The invention is particularly useful for being applied in hospitals and health centres where a considerable number of patients are cared for, and it is possible to centralise the information and swiftly and effectively take care of the alarms that are given off.

[0011] Taking into account the background documents disclosed above and others referring to more complex devices existing on the market, the inventor has devised the idea of applying a special adhesive tape on any type of nappy, sanitary towel, or pad of the type normally used medical centres, hospitals, nursing homes, retirement homes, or private residences.
[0012] Nappies and pads detecting urine sold on the market are higher-priced items than normal nappies and pads as they must incorporate the corresponding installation during the manufacturing process. As there are multiple qualities, types, and sizes, it is understood that their price is considerably higher with respect to that of ordinary nappies or pads.
[0013] In a first, very simple solution, the invention shows a tape having a width in the order of 1.5-2.5 centimetres, incorporating two considerably parallel electrical conductors, one end of which is arranged to establish proper electrical contact on the connection terminals of an emitter sensor duly housed and protected by a clamp-type device.
[0014] With this arrangement, the emitter sensor is prepared for taking readings of ohmic resistance in the range between 0.1 and 100 KΩ, which means that with the supporting member/emitter sensor unit correctly placed, the following may occur:
[0015] Under these conditions, if the user removes the supporting member/emitter sensor by pulling on it, or if the caregiver has not properly put said unit in place and this has not been checked, the reading of the resistor that is shown will be high (highest point on the scale due to an open circuit) and, however, the user requires immediate attention to normalize the placement of the supporting member/emitter sensor. In other words, this simplest solution, without denying the advantages it has, has an important drawback that the inventor has corrected and improved by incorporating a resistor between both parallel conductors at the end nearest the location where the supporting member/emitter sensor is clamped.
[0016] With this improved embodiment, the circuit for reading the ohmic resistance of the sensor is calibrated such that it is capable of distinguishing three very specific different cases:
[0017] The tape is made from a normal textile material or, alternatively, from a material of propylene of the type known as "non-woven fabric," which is more economical and can be of the ecological type, with the subsequent advantages for purposes of environmental pollution.
[0018] In any of the cases, the tape incorporates an adhesive on one of its faces with a protective band that is removed when it is adhered on the nappy.
[0019] The inventor envisages the marketing of the tape in two forms:
In the first form, the tape is provided in groups of strips having specific lengths in the order of 50 centimetres, with the resistor incorporated at one end.
[0020] In a second form, the tape is provided wound, as if it were a roll of surgical tape, in lengths of several metres to be cut into equal segments of 50 centimetres, where the cut must always be made around the notch where the resistor is located.
[0021] The mentioned length to be precisely defined in due time must be slightly greater than the largest size of the nappies normally used, which may entail the need to cut certain excess at the end opposite where the resistor is located.
[0022] Its use is very simple, as it consists of cutting the necessary length and adhering on any type of nappy, or even on commonly used garments such as panties or underwear.
[0023] The end of the resistor is arranged in the front part of the nappy so that it is close to the notch where the emitter sensor is connected with its clamp device.
[0024] In the embodiment shown, the emitter sensor, with its corresponding electronic circuit, has an activation button and three LEDs powered by an internal battery. When the LEDs are off, the nappy is completely dry. If one of them lights up, it shows the existence of slight dampness. If two of them light up, it shows greater dampness, and if the three of them light up, the nappy must be replaced immediately.
[0025] These indications are useful when the caregiver directly checks the patient's conditions, but in cases of a significant number of patients, supervision is performed remotely as each of the corresponding emitter sensors sends all the signals to the control centre where visually monitoring is performed on a screen or with acoustic warnings.
[0026] In summary, the device of the invention has, among others, the following advantages:
[0027] The following section, which must be considered an integral part of this document, includes several schematic drawings that describe the invention.

[0028] To complement the preferred embodiment described below and for the purpose of helping to better understand the features of the invention, a set of drawings, which must always be interpreted in an illustrative and non-limiting manner, is attached as an integral part of said description.

Figure 1 schematically shows the tape of the invention presented in the form of a strip, where the following is indicated:

Figure 2 schematically shows a nappy with a tape strip that is adhered along its middle area, where it can be seen that the resistor is close to the front end. An enlarged view is shown for better viewing purposes.

Figure 3 shows the nappy unit and an emitter sensor with its supporting member before it is coupled on the nappy.

Figures 4, 5 and 6 schematically show the nappy, the tape strip with its resistor, and the emitter sensor in situations reflecting a dry nappy (Figure 4), a wet nappy (Figure 5), and an improperly placed sensor (Figure 6), where the following is indicated:

Figure 8 separately depicts a front view of the emitter sensor and the supporting member which will serve for obtaining a firm attachment on the nappy.

Figure 9 shows a rear view of the same elements as in the preceding figure. 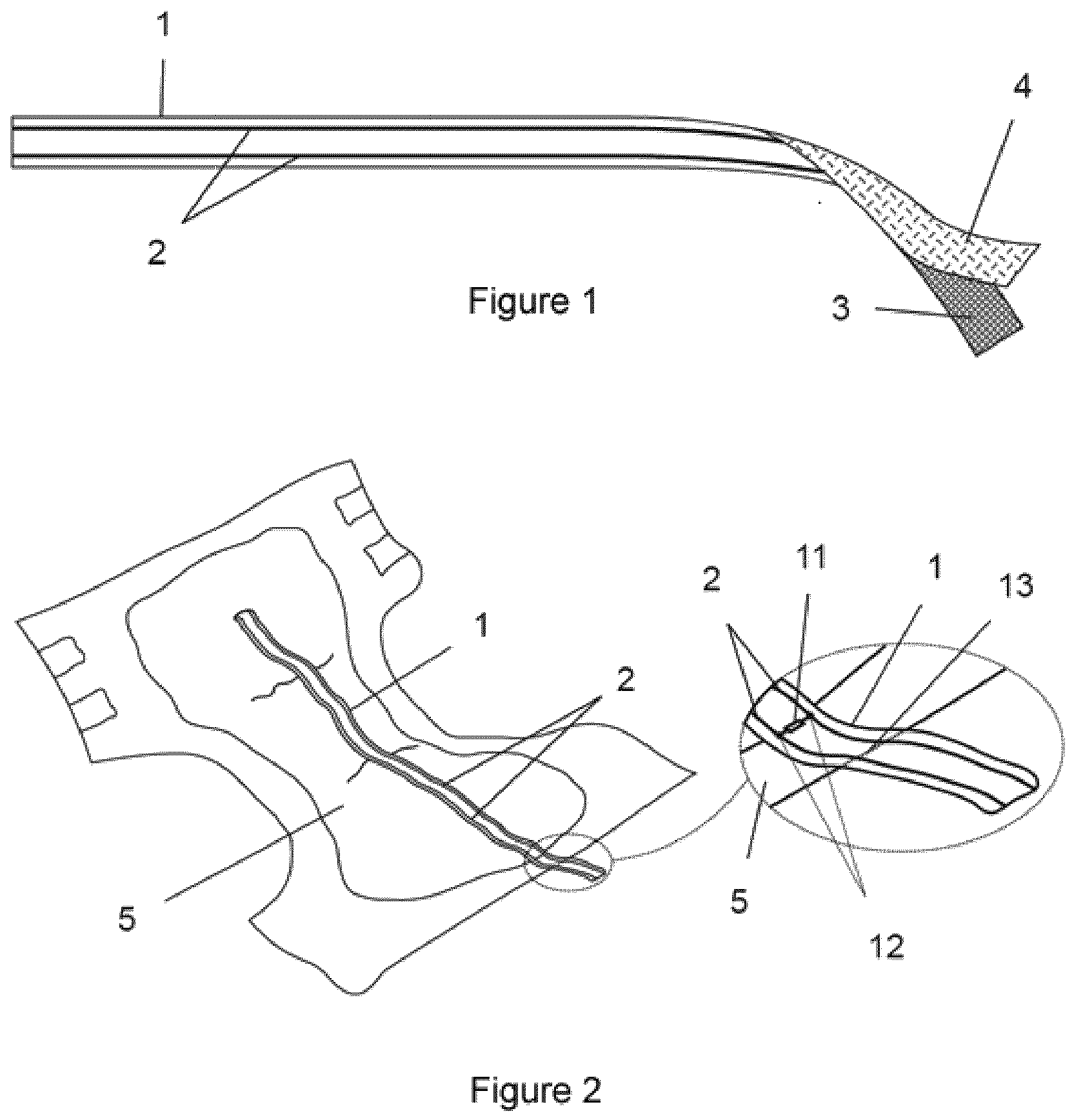 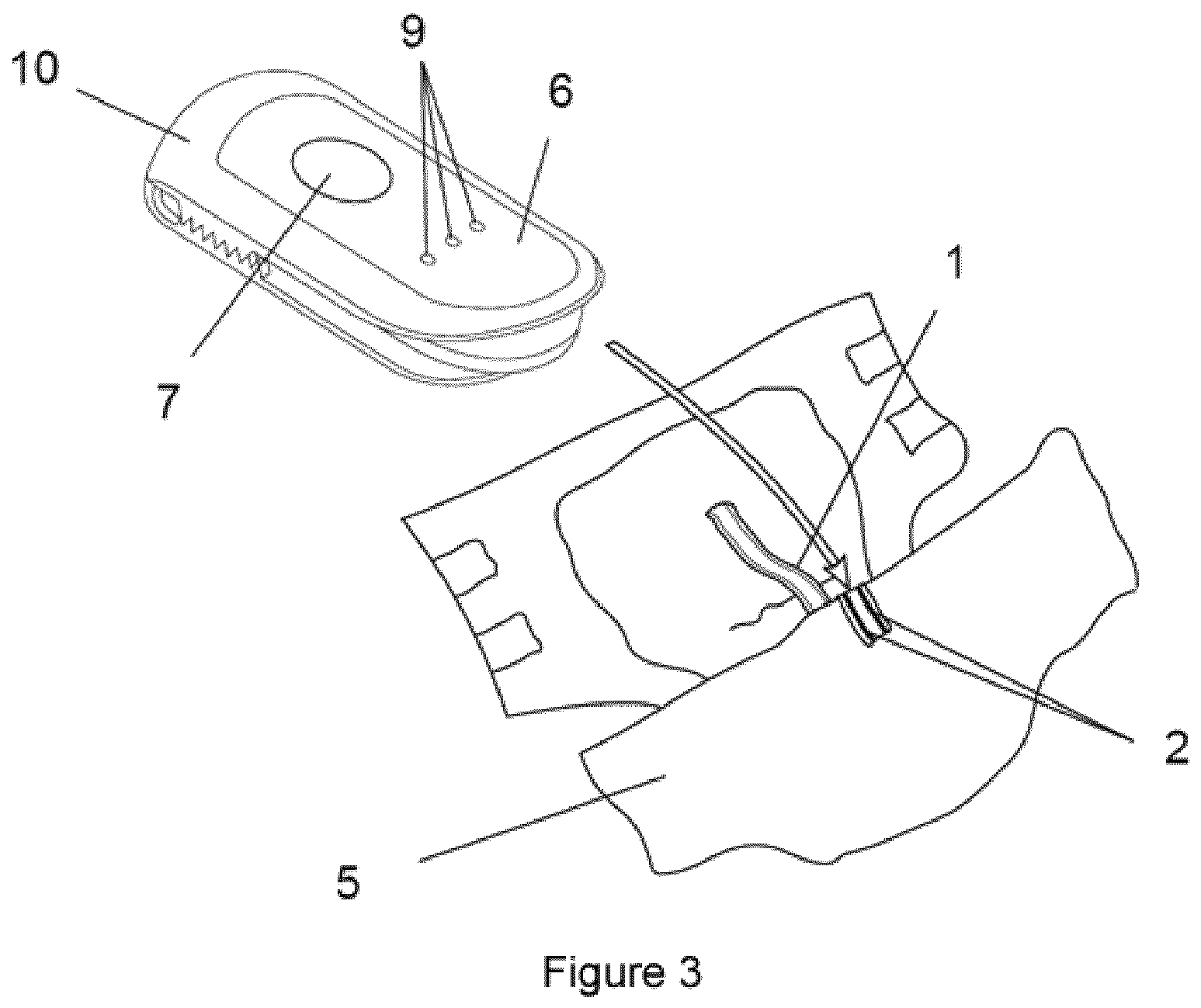 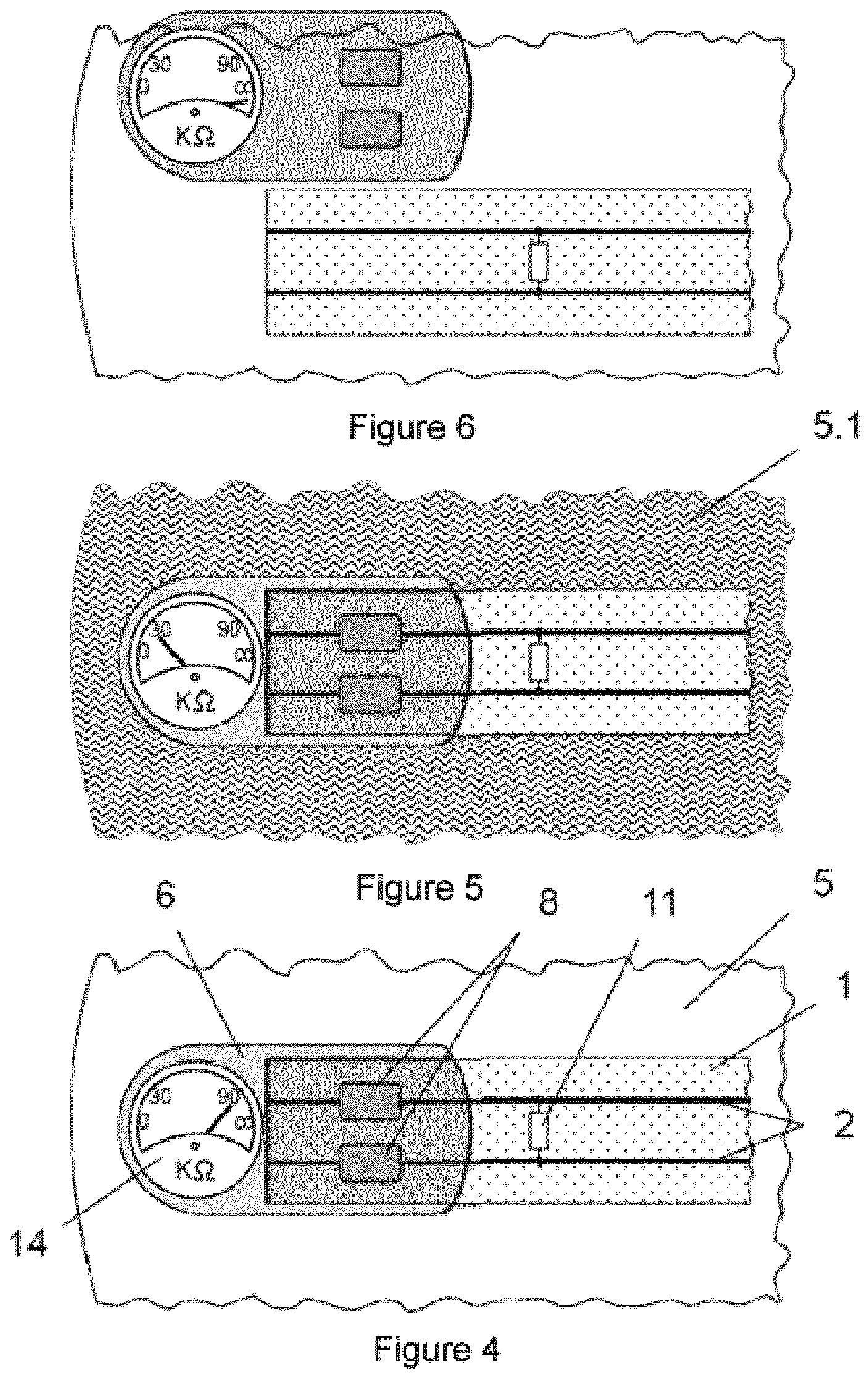 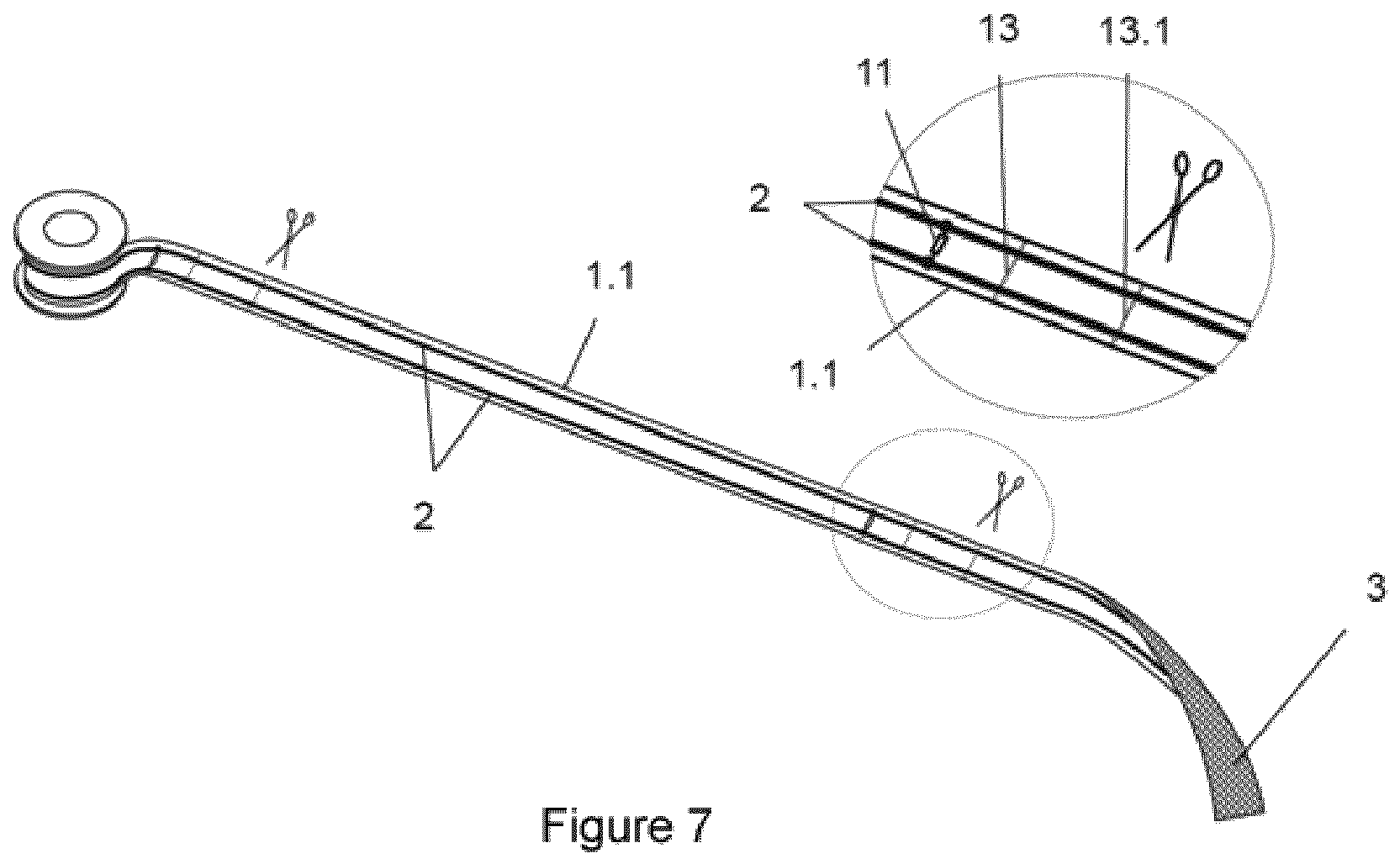 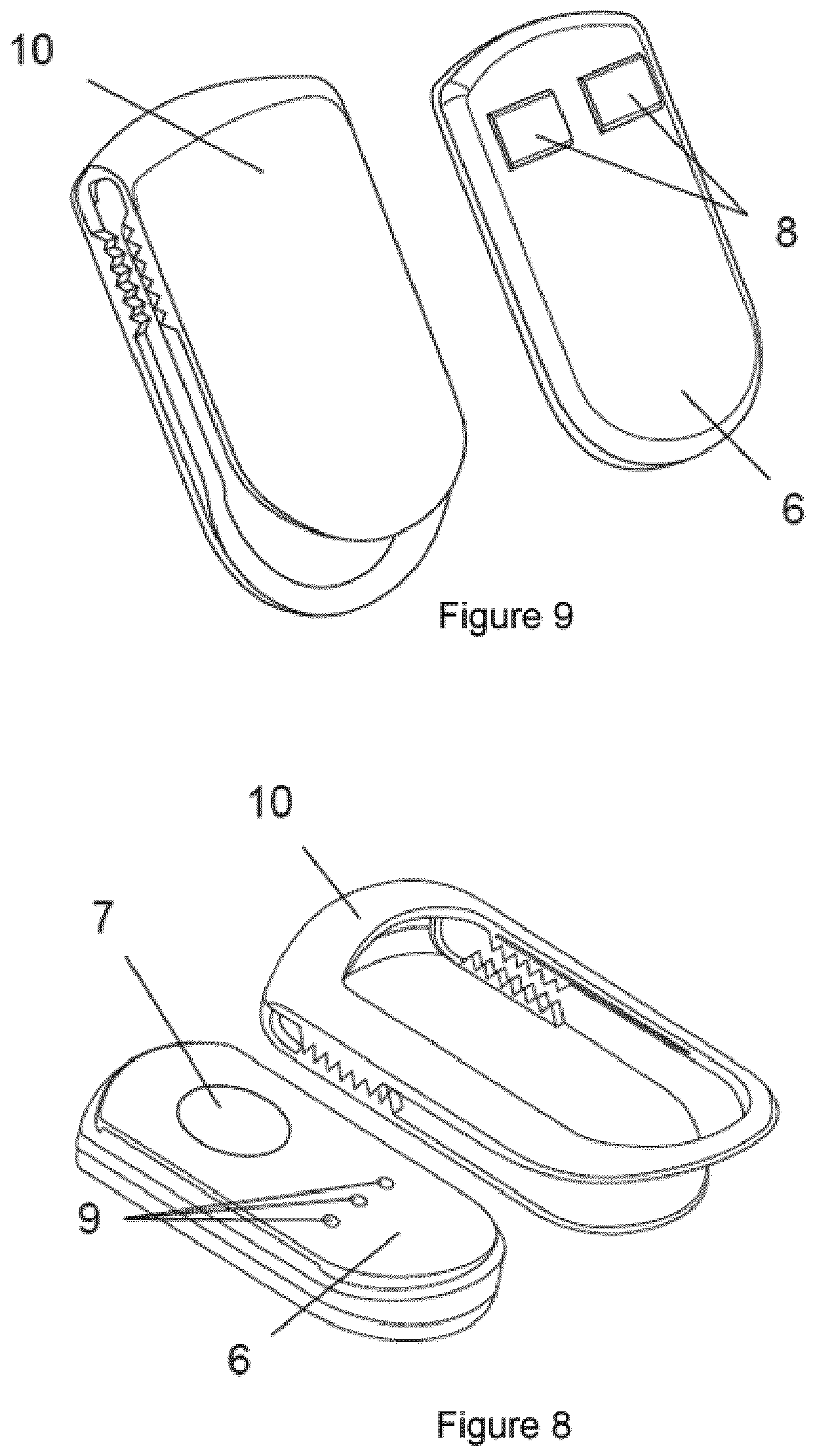 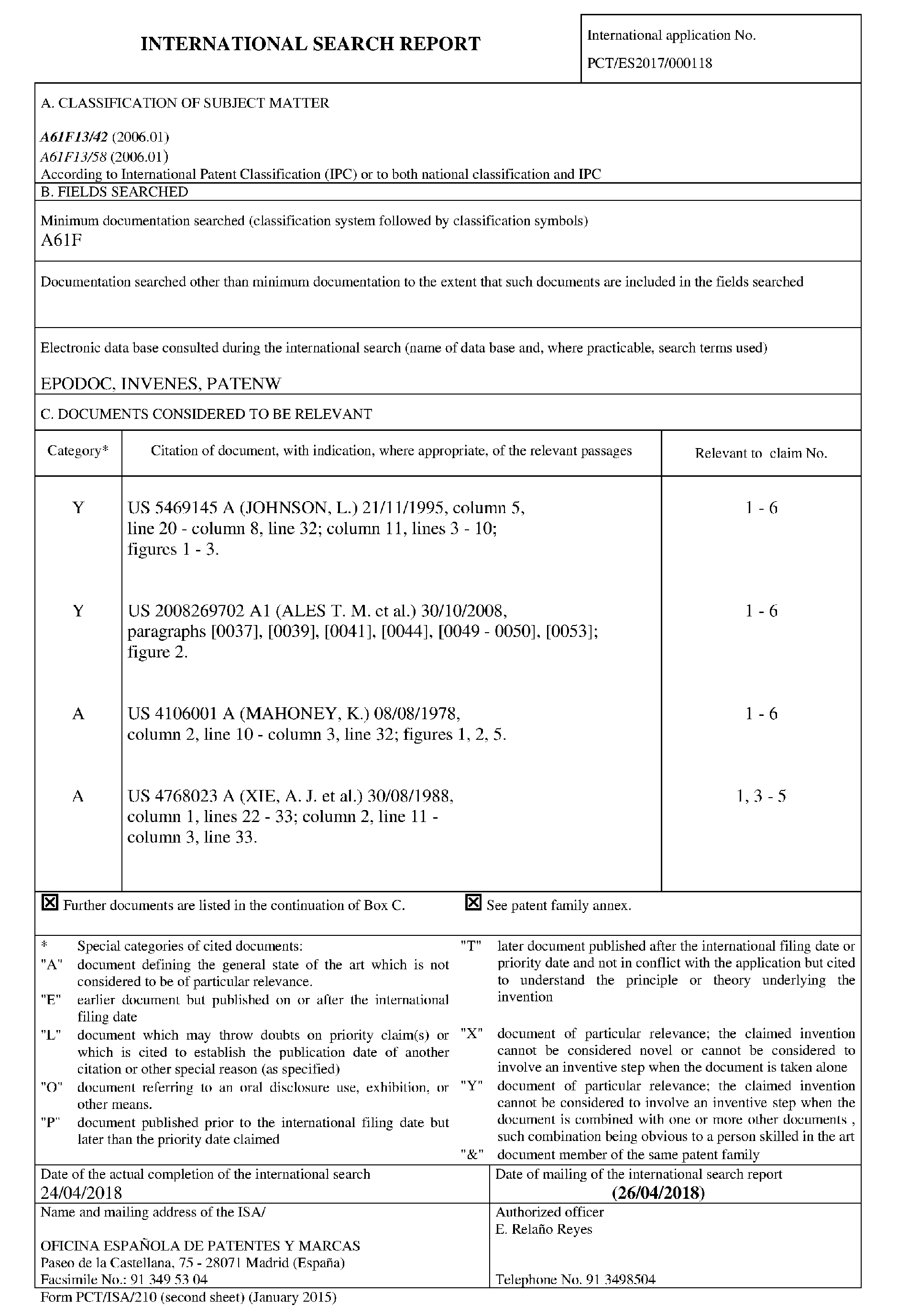 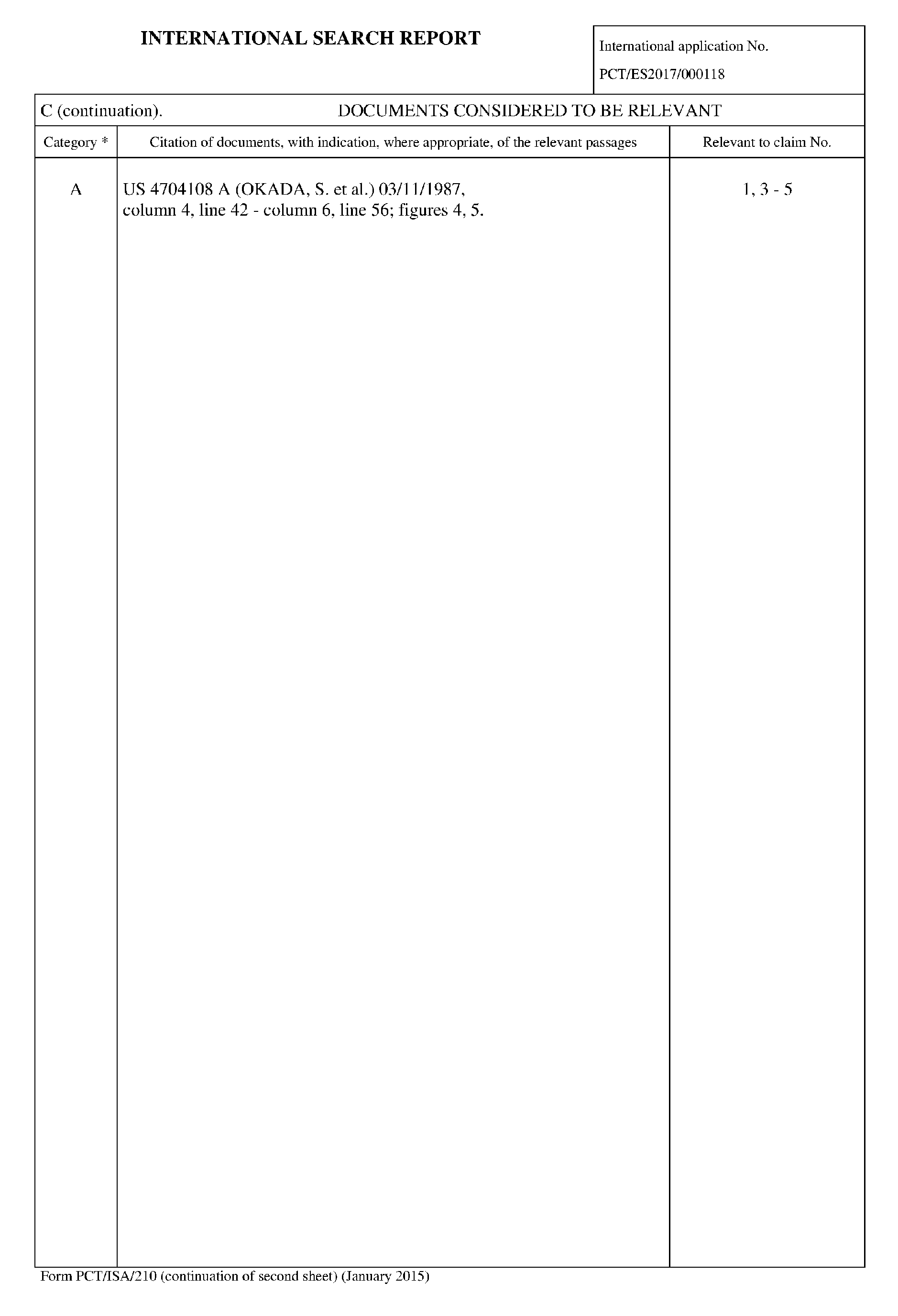 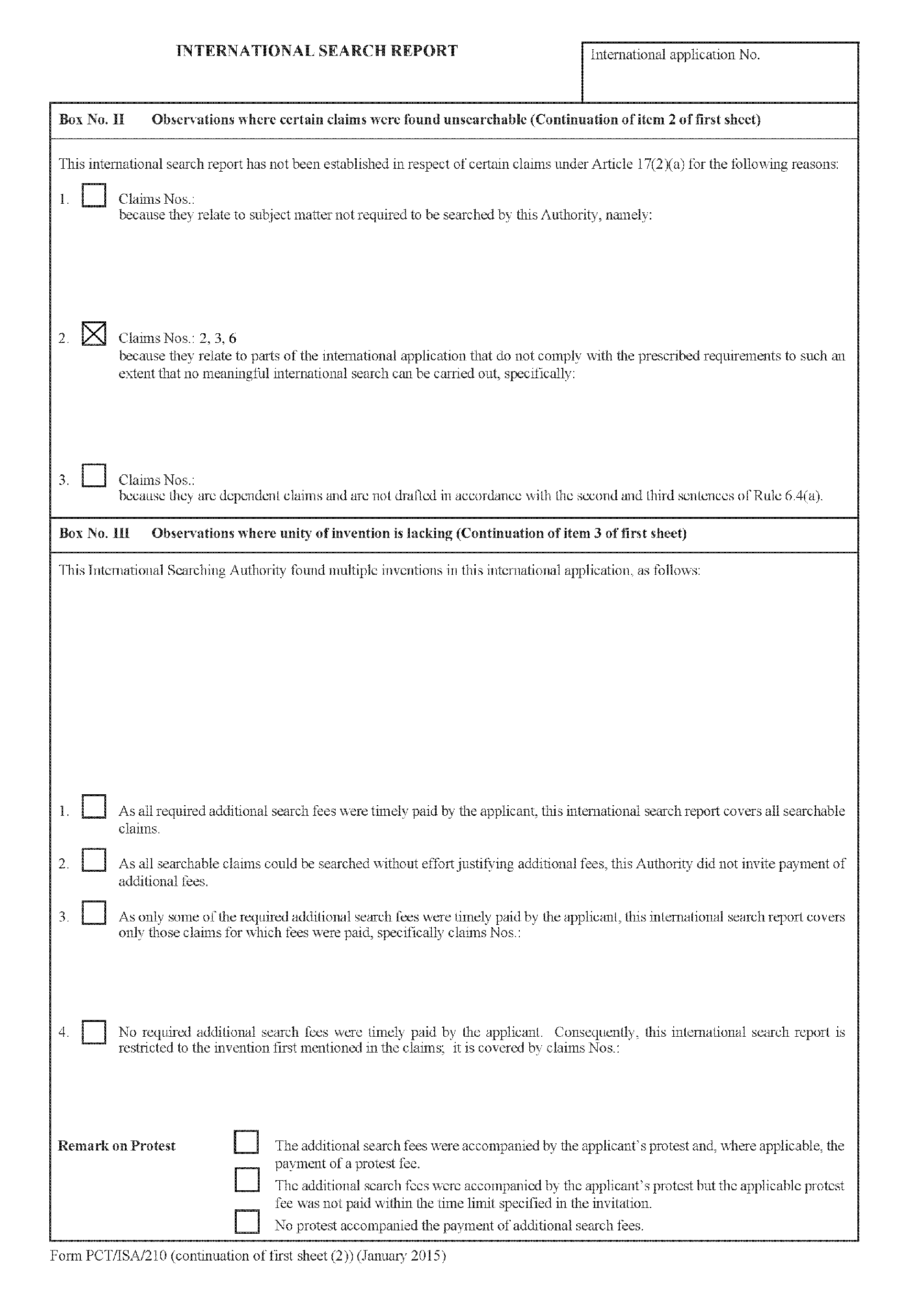 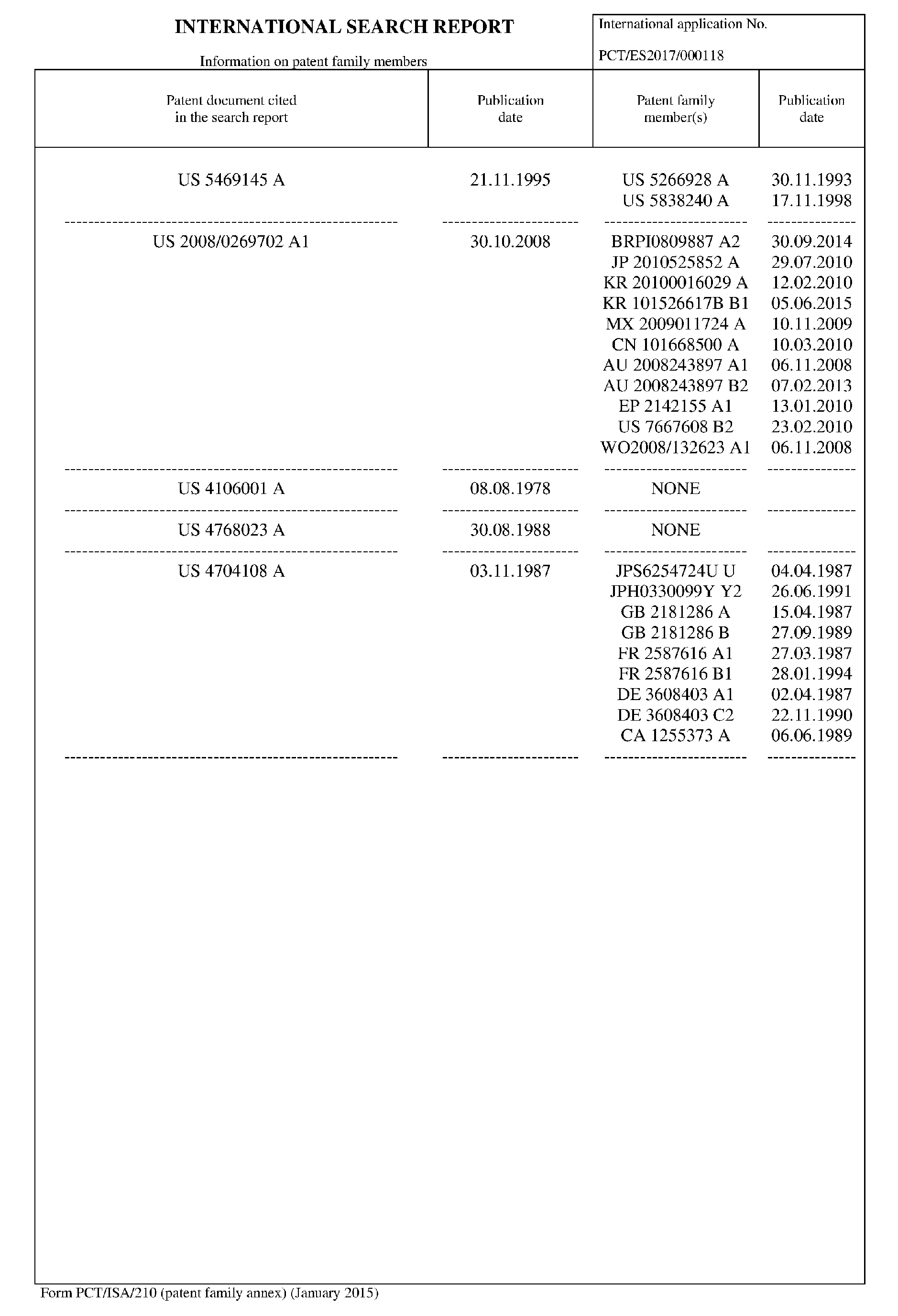