[0001] Isoquercitrin is the 3-O-glucoside of quercetin and several unexpected bioactivities have been ascribed to it. For example, it has been reported that isoquercitrin can inhibit protein disulfide isomerase (PDI), an enzyme strongly implicated in thrombus formation. See Flaumenhaft et al., Arteriosclerosis, Thrombosis, and Vasc. Biol., 2015, 35:16-23. It is believed that inhibitors of PDI, e.g., isoquercitrin, can prevent or block thrombosis.
[0002] A Phase II/III clinical trial is ongoing to test the ability of isoquercitrin to inhibit cancer-associated thrombosis. See the CAT IQ trial on the world wide web at clinicaltrials.gov. It is noteworthy that the daily doses of isoquercitrin administered in the trial are 500 mg and 1000 mg. These doses are unusually high, as compared to the doses of typical pharmaceuticals. It is likely that a large dose of isoquercitrin is required to achieve sufficient bioavailability, due to its relatively low oral absorption.
[0003] Enzymatically modified isoquercitrin (EMIQ) with higher water solubility has been developed to improve the bioavailability of isoquercitrin. See Murota et al., Arch. Biochem. Biophys., 2010, 501:91-97. Yet, EMIQ is a mixture of at least five bioactive isoquercitrin derivatives. See Akiyama et al., J. Food Hyg. Soc. Japan, 1999, 41:54-60. It is impractical to use such a mixture of active ingredients as a drug in humans according to present US Federal Drug Administration guidelines.
[0004] There is a need to develop pharmaceutical compositions with higher oral absorption of isoquercitrin via improved water solubility without the above-described drawbacks.

[0005] To address the above need, a water-soluble pharmaceutical composition is provided that contains isoquercitrin, L-arginine, and an alkali salt of ascorbic acid. In the composition, the molar ratio between the isoquercitrin, L-arginine, and the alkali salt of ascorbic acid is 1: 1.6-2.6: 0.16-1.95.
[0006] The details of the invention are set forth in the description below. Other features, objects, and advantages of the invention will be apparent from the detailed description, the drawing, and also from the appended claims.

[0019] An exemplary isoquercitrin/L-arginine mixture was prepared by mixing 0.01 mol isoquercitrin with an aqueous solution containing 0.02 mol L-arginine, heating the mixture to 80 °C until the isoquercitrin dissolved completely, and adding 0.001 mol sodium ascorbate. After cooling, the stability of isoquercitrin was tested by heating the mixture to 50 °C and quantifying by HPLC the amount of intact isoquercitrin remaining after 0 h, 5h, and 24 h. The results showed that the amount of intact isoquercitrin at 5 h and 24 h at 50 °C was 100% and 98.1%, respectively, of the initial amount of isoquercitrin in the solution. A similar study was performed to assess the stability of a flavonoid related to isoquercitrin, i.e., catechin, after dissolving it with L-arginine and sodium ascorbate. The amount of intact catechin remaining in the solution after 5 h and 24 h at 50 °C was 30.8% and 2.3%, respectively. It was quite unexpected that only 1.9% of the isoquercitrin degraded after 24 h, as compared to 97.7% of the catechin under identical conditions.
[0020] A second exemplary isoquercitrin/L-arginine mixture was prepared by first dissolving 105.5 g of L-arginine (0.61 mol) in 845 ml H2O heated to 45 °C, then adding 20.9 g of L-ascorbic acid sodium salt (0.11 mol) and 46.5 g of hydrogenated polydextrin and stirring until fully dissolved.
[0021] To the above solution, 127 g of isoquercitrin monohydrate (0.26 mol) was added and the resulting mixture was heated at 80 °C for 30 min. Upon complete dissolution of the isoquercitrin, the solution was spray dried and sieved at 80 mesh. Any remaining H2O was evaporated in vacuo to leave a viscous oil, followed by vacuum drying at 60 °C for 8 hours to provide a yellow orange solid composition (253.9 g).

[0026] Permeation of a drug into cultured intestinal Caco-2 cells is measured to predict the relative absorption rate of the drug when given orally.
[0027] Formulations 1 and 2 described above in Example 2 were added separately into a solution. A 500 µL aliquot of each sample was added to the apical side of Caco-2 cells that had been cultured for 19 days, and 2,000 µL of HBSS buffer was placed on the basolateral side of the cells. The cells were cultured in an incubator for 2 hours at 37 °C, after which media was recovered from both the apical and basolateral sides of the cells. The concentration of isoquercitrin in the media was determined by HPLC, and the degree of absorption from the apical side to the basolateral side was determined by the following equation:

[0029] A randomized clinical pharmacokinetic study was performed to compare the three different isoquercitrin formulations described above in Example 2 administered in a single dose to 10 volunteers under fasting conditions. Healthy males between the ages of 24 and 39 years inclusive having body mass index values within the range of 19.6-24.3 participated in the study.
[0030] Capsules containing formulations 1-3 shown in Table 1 were prepared as described above. Each volunteer took two capsules containing (i) formulation 1 (IQC; 500 mg isoquercitrin total), (ii) formulation 2 (IQC/Arg; 250 mg isoquercitrin total), or (iii) formulation 3 (IQC/Arg; 125 mg isoquercitrin total) on three test days, administered according to a previously randomized sequence.
[0031] Isoquercitrin levels were measured in blood samples removed from the participants before dosing (0 h) and 0.5, 1, 2, 4, and 8 h after dosing following established procedures. More specifically, in order to determine isoquercitrin levels, plasma prepared from each blood sample was treated first to deconjugate isoquercitrin metabolites into aglycones quercetin and isorhamnetin, which were subsequently quantified by HPLC.
[0032] Briefly, 200 µl plasma samples were mixed with 10 µl 10% dithiothreitol and 50 µl 0.58mol/L acetic acid. The mixture was treated with 1000 U of beta-glucuronidase and 100 U/mL of sulfatase, both from Helix pomatia Type HP-2, in 0.1 M sodium acetate buffer (pH 5.0) for 120 min at 37 °C.
[0033] After deconjugation, 500 µl of 10 mM oxalic acid was added to each sample and the mixture centrifuged at 10,000 x g for 5 min. All treated samples were subjected to solid phase extraction using preconditioned Oasis HLB cartridges as directed by the manufacturer (Waters, Milford MA USA). The extracted eluates were evaporated under nitrogen, reconstituted in methanol, and subjected to HPLC analysis by loading each eluate on a C18 column (Waters ACQUITY UPLC BEH; 1.7 µm, 2.1 x 100 mm), applying a gradient solvent system of 0.1% formic acid in H2O/ 0.1% formic acid in acetonitrile HPLC, and detecting the presence of quercetin and isorhamnetin with an Ultimate 3000 rapid separation LC, Q Exactive spectrometer. The concentration of each aglycone was calculated using a standard curve prepared with authentic quercetin and isorhamnetin internal standards. The analytical limit for quercetin and isorhamnetin under the above conditions was 0.03 µM at 4 °C.
[0034] Pharmacokinetic profiles are shown in Fig. 1. Of note, administering IQC/Arg 125 mg resulted in a pharmacokinetic profile similar to that of IQC/Arg 250 mg but with the values of Cmax and AUC about half those seen with the higher dose, indicative of a dose-dependent relationship.
[0035] Pharmacokinetic values calculated from profiles similar to those depicted in Fig. 1 are shown in Table 3 below.
Table 3. Pharmacokinetics

[0036] The results showed, unexpectedly, that IQC/Arg 250 mg reached a maximum plasma concentration (Cmax) of 4.2 µM, nearly 2-fold higher than 2.2 µM shown by IQC 500 mg. It was also surprising that the area under the curve extrapolated to infinity [AUC (0-∞ h)], an estimate of total drug availability, for IQC/Arg 250 mg was nearly 8-fold larger than that of IQC 500 mg, despite the fact that only half as much isoquercitrin was administered. Clearly, the data indicate a statistically significant improvement in isoquercitrin absorption when it is combined with L-arginine.
[0037] Moreover, the Cmax and AUC (0-6 h) previously reported for enzymatically modified isoquercitrin (administered at 2 mg quercetin aglycone/kg body weight) were 1.84 µM and 5.99 µmol·hr/L, respectively. See Murota et al. By contrast, the respective Cmax and AUC (0-6 h) values for IQC/Arg 250 mg (administered at 2.56 mg quercetin aglycone/kg body weight) were 3.32 µM and 9.27 µmol·hr/L, indicating greater bioavailability of isoquercetin from the IQC/Arg formulation, as compared to the enzymatically modified isoquercitrin, despite the similar doses of isoquercitrin administered.

3. The water-soluble pharmaceutical composition of claim 1 or 2, wherein the molar ratio between the isoquercitrin, L-arginine, and the alkali salt of ascorbic acid is 1: 1.8-2.5: 0.36-1.25.

5. The water-soluble pharmaceutical composition of claim 4, wherein a molar ratio between the isoquercitrin and each vitamin in the composition is 1: 0.01-0.1.

6. The water-soluble pharmaceutical composition of any of claims 1 to 5, wherein the composition is a topical formulation.

7. The water-soluble pharmaceutical composition of claim 6, wherein the composition is a topical formulation selected from the group consisting of a solution, a liniment, a lotion, a cream, an ointment, a paste, a gel, and an emulgel.

8. The water-soluble pharmaceutical composition of any of claims 1 to 5, wherein the composition is an oral formulation.

9. The water-soluble pharmaceutical composition of claim 8, wherein the composition is an oral formulation selected from the group consisting of a liquid, a capsule, a tablet, a pill, and a gel.

10. The water-soluble pharmaceutical composition of claim 9, wherein the composition is a capsule or a tablet formed with an enteric coating. 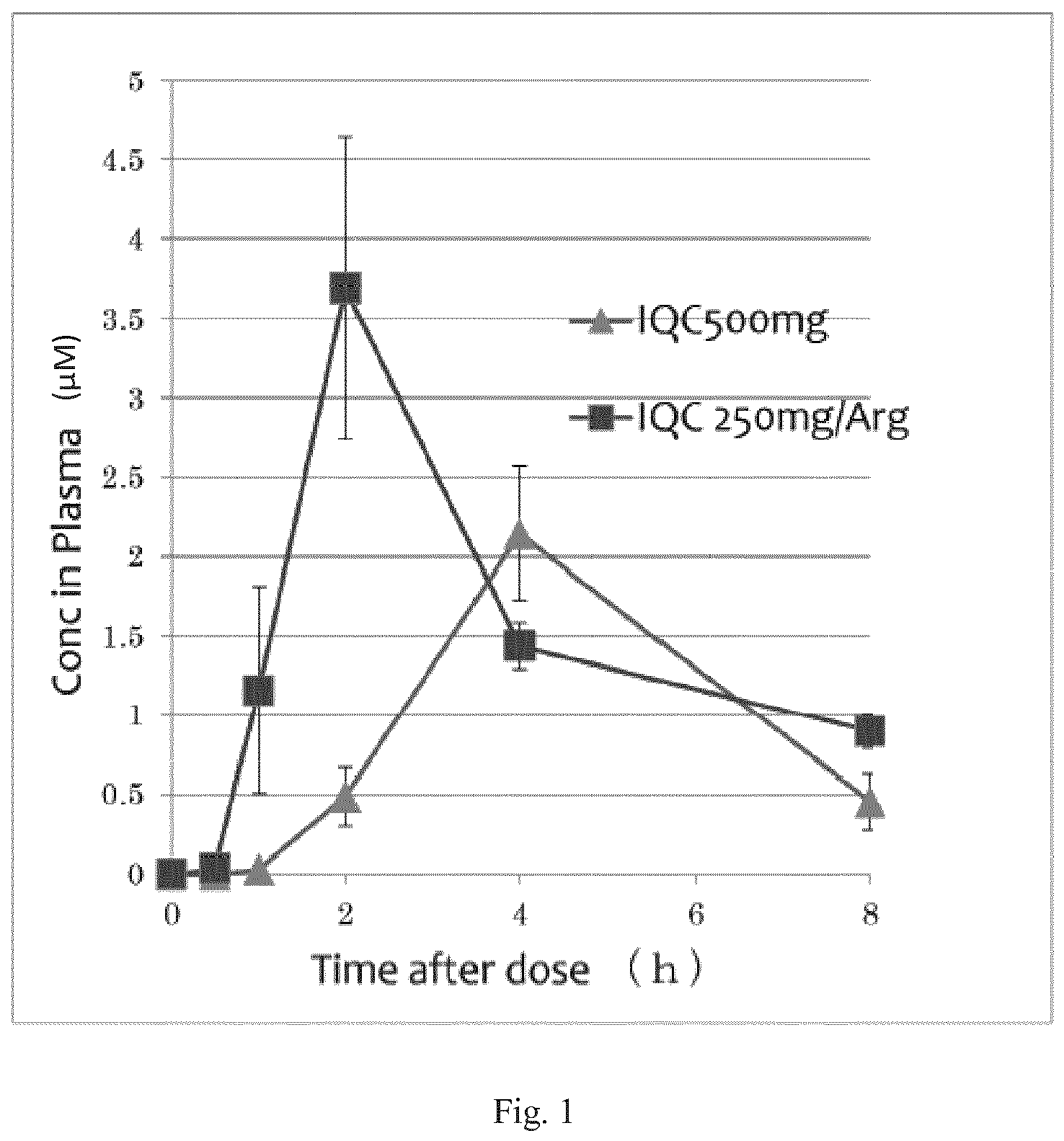 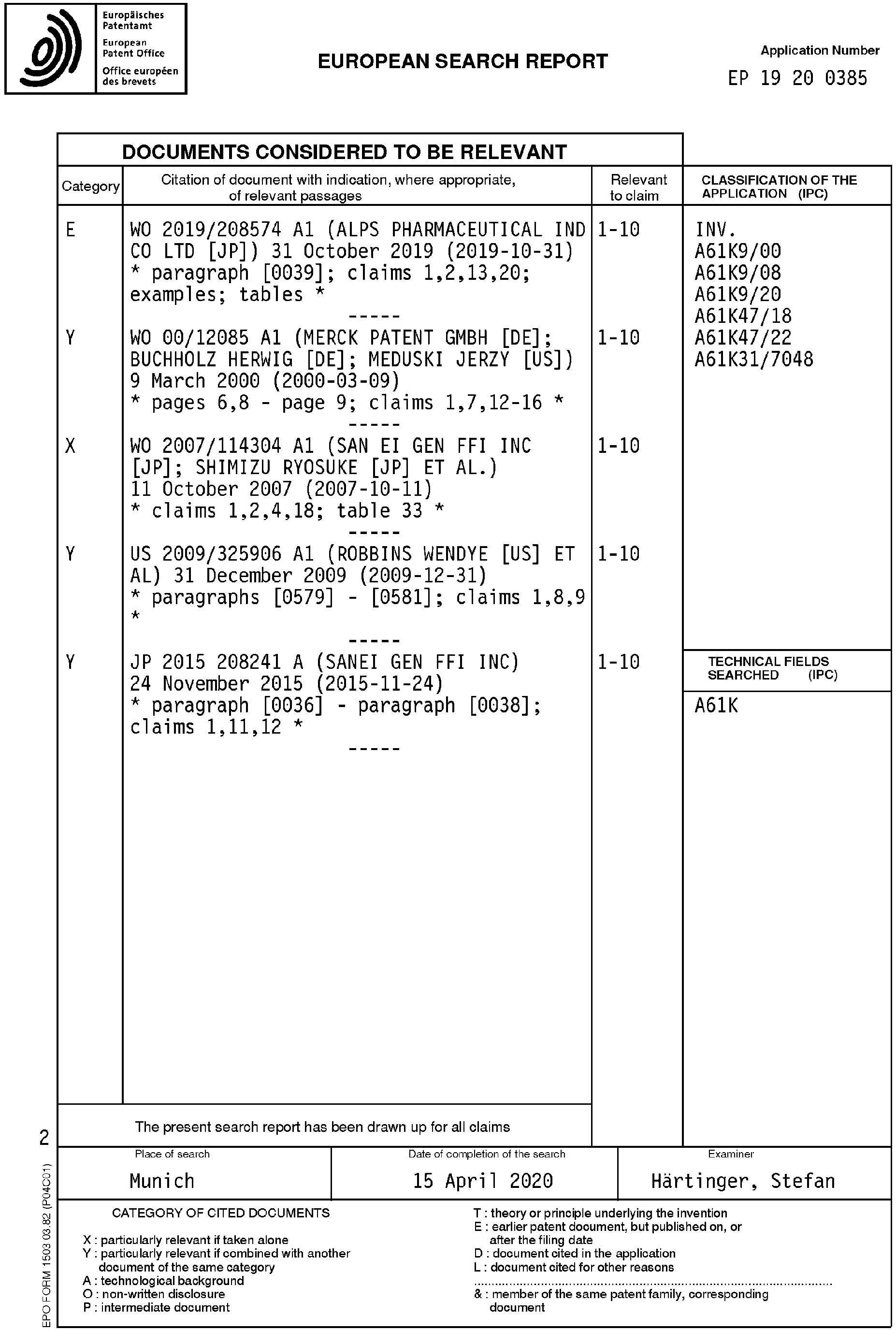 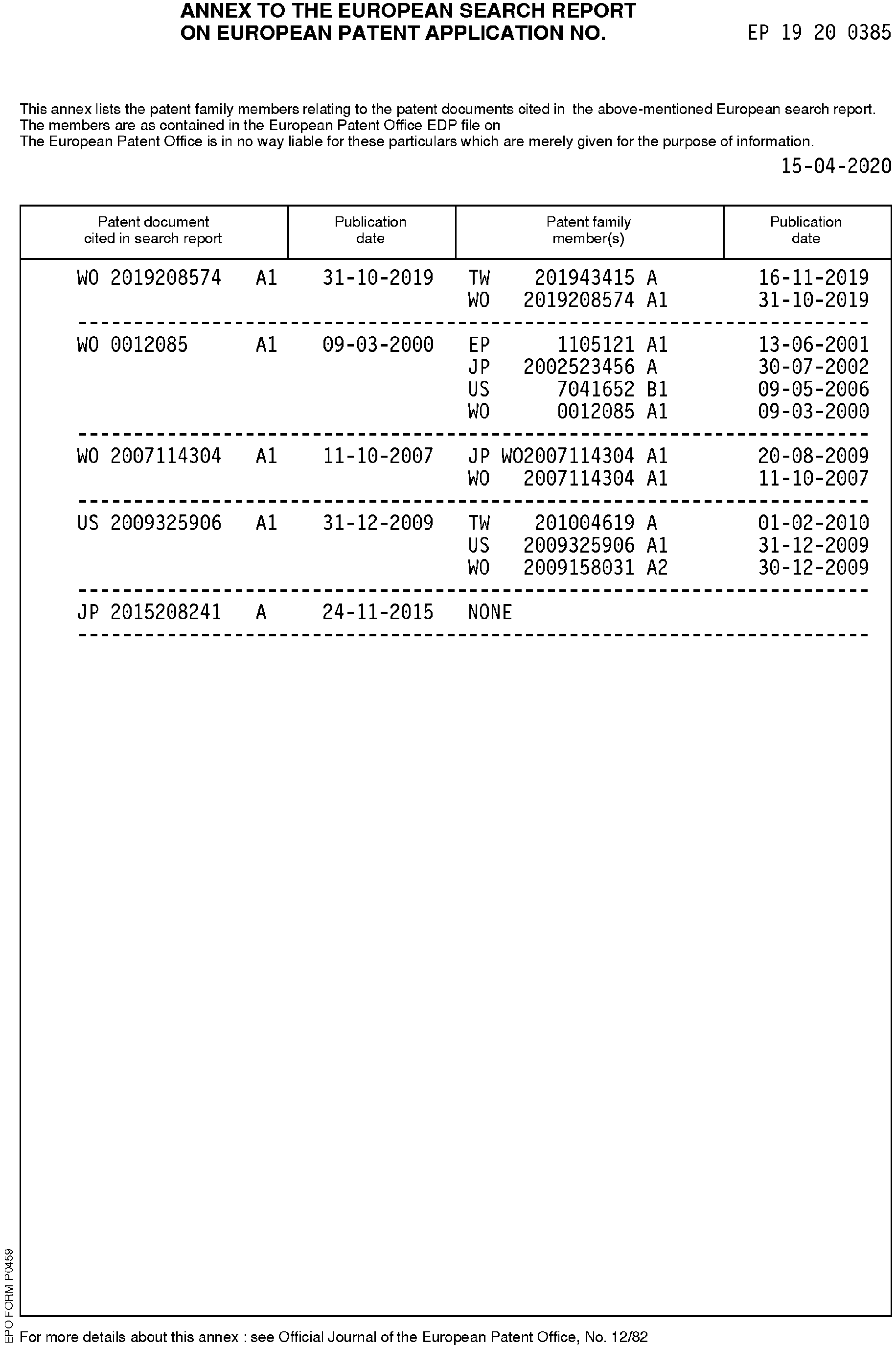