[0001] The present invention relates to a process for producing coated silver catalysts. The invention further addresses the silver catalysts themselves and the advantageous use thereof in formaldehyde synthesis.
[0002] Formaldehyde (FA) is one of the most important commodity chemicals; the production in the EU in 2002 was more than 3 million tonnes; double the amount is likely to have been produced worldwide (5.3 million tonnes (1989)) [K. Weissermel, H.-J. Arpe, Industrielle Organische Chemie, VCH, 1994]. FA is required especially for the production of various resins (phenol, melamine, etc.) and polymers. The synthesis proceeds virtually exclusively from methanol [K. Weissermel, H.-J. Arpe, Industrielle Organische Chemie, VCH, 1994; M. Qian, M.A. Liauw, G. Emig, Appl. Catal. A: General, 238 (2003) 211], although the direct synthesis from methane has also been studied [H. Berndt, A. Martin, A. Brückner, E. Schreier, D. Müller, H. Kosslick, G.-U. Wolf, B. Lücke, J. Catal., 191 (2000) 384]. The synthesis from methanol is effected either by dehydrogenation or partial oxidation. While the dehydrogenation (Eq. 1) proceeds endothermically (+84 kJ/mol), the partial oxidation (Eq. 2) is strongly exothermic (-159 kJ/mol).

Production of the catalysts

[0027] The Ag crystals are coated with a ceramic γ-Al2O3 layer by means of a colloidal boehmite (AlOOH) sol or of a polymeric Al2O3 sol.
[0028] The characteristic feature of colloidal sols is dispersed ultrasmall particles in the region of 1 nm which statically repel one another owing to surface charges. For the preparation of the colloidal boehmite sol, aluminium tri-sec-butoxide (ATSB) is diluted with 2-butanol and added dropwise to water acidified with nitric acid. The hydrolysis which takes place proceeds with a water excess. The 2-butanol which forms is subsequently distilled off. The conversion to the boehmite with simultaneous stabilization of the sol takes place as a result of boiling under reflux at 120°C. A clear sol which shimmers in a pale bluish colour is obtained.
For polymeric sols, metal alkoxides likewise serve as the precursor material. The
polymeric aluminium oxide sol is therefore likewise prepared from isopropanol-diluted aluminium tri-sec-butoxide (ATSB). In contrast to the preparation of colloidal sols, only a small amount of water is supplied here, which leads to partial hydrolysis and prevents the precipitation of the hydroxides. The partially hydrolyzed alkoxides condense with elimination of water to form polymers. Complete hydrolysis is prevented by adding complexing agents such as acetyl acetone. Stirring with exclusion of air and addition of nitric acid stabilizes the sol. A clear sol is formed.
The sols obtained are used to coat the Ag crystals by means of dipping or spraying. This is followed by the drying of the crystals on a meshlike substrate at moisture contents of > 50% and temperatures between 25 and 100°C. This converts the sol to a gel; the nanoparticles are crosslinked three-dimensionally. By sintering the coated crystals in ceramic crucibles at 500°C with a hold time of 3 hours, a ceramic coating is formed from the gel layer on the Ag crystals.

[0029] An apparatus as shown in Figure 3 was used to perform activity tests.
[0030] N2 and air/O2 were metered in with MFCs (MultiFlowControllers), which had been calibrated beforehand by means of a soap film meter. For checking, the gas streams were also measured later after passing through the unheated reactor. The liquid was metered in by means of an HPLC pump with an upstream degasser. The H2O/meOH mixtures were established via starting weights. To calculate the liquid volume to be metered in (ml/min), additive behaviour of the densities of the components was initially assumed for the density of the mixtures. After the testing had finished, the amount of liquid injected was checked with reference to the change in weight of the liquid reservoir. Accordingly, a correction of the amount of MeOH metered in was effected for the calculation of the MeOH conversion (X-MeOH), but also the percentages by volume of all feed components and the GHSV (GasHourlySpaceVelocity).
[0031] The reactor used was an ALSINT 99.7 ceramic tube; external diameter 15 mm, internal diameter 10 mm, length 500 mm (from Haldenwanger Berlin (BTK - Buntenkötter Technische Keramik, Neuss)). Reactor inlet and outlet were kept at about 120°C by means of water cooling (cooling coils). The thermostat box (120°C) ensures that formaldehyde does not polymerize before the product stream is introduced into the condenser and into the collecting vessel for the product samples. The liquid reactant was evaporated at 120°C in an evaporator connected upstream of the reactor. The reactor temperature was regulated to the temperature desired in the catalyst bed, which was measured in the middle of the catalyst bed. It had to be readjusted in the event of changes in the liquid feed rate and composition. After leaving the reactor and the thermobox, the product gas was cooled to approx. 5°C in a spiral condenser and transferred into the sample withdrawal point which was likewise cooled.
[0032] The catalyst bed consisted in each case of 0.1 g of Ag catalyst of particle fraction 0.5-1 mm, mixed with 3 g of 1-1.4 mm white high-grade corundum (in analogy to [M. Qian, M.A. Liauw, G. Emig, Appl. Catal. A: General, 238 (2003) 211.]). The volume of the bed was 2.3 ml (basis of the GHSV calculation). To preheat the feed on the inlet side, an additional high-grade corundum bed was layered over the catalyst bed. Three catalyst specimens were tested: Cat. 1: "Pure silver" (Ag), Cat. 2: Ag modified with polymer-based aluminium oxide (aluminium hydroxide precursor - inventive) (Ag-P), Cat. 3: Ag modified with colloid-based aluminium oxide (aluminium sol precursor - inventive) (Ag-K).
[0033] The gas chromatography analyses were effected with a Shimadzu GC 17A using an AT-Q 30 m × 0.32 mm capillary column and an FID with upstream methanizer. Specifically, the following conditions were employed:
Injection volume 0.9 µl, split 40, linear velocity 30.9 cm/s, temperature program 6 min isothermal 120°C, 10 K/min to 200°C, hold time 1 min, 5 injections each per sample. The capillary GC column was operated at start temperature 120°C, in order to prevent polymerization of formaldehyde or methylal formation with MeOH.
[0034] Tests were conducted at 500-600°C and space velocities of 6000-20 000 h-1; the MeOH:water ratio was 0.67 or 1.2. The MeOH conversions reach approx. 70% at 600°C; the FA yields are 35-40%. At low loadings or high residence times, a high FA decomposition rate was observed; CO was the main product.
[0035] The details of the tests can be taken from the following tables:
Table 1
Table 2 - Test parameters
Table 3 - Real parameters 1 (Cat. 1 = Ag (reference), Cat. 2 (Ag-P), Cat. 3 (Ag-K))
Table 4 - Real parameters 2 (Cat. 1 = Ag (reference), Cat. 2 (Ag-P), Cat. 3 (Ag-K))

[0036] Under all reaction conditions employed, surprisingly, no significantly poorer yields and methanol conversions were obtained with the Ag catalysts whose surface was modified with aluminium oxide deposits (Ag-P and Ag-K).
[0037] Figs 1 and 2 show the MeOH conversions and FA yields as a function of the reaction temperature and of the space velocity.

1. Process for producing silver crystals with a thin porous coating of oxidic material of the elements selected from the group consisting of aluminium, silicon, zirconium, titanium and mixtures thereof,
characterized in that

a) the silver crystals are contacted with a sol-gel solution of the elements in question, and

b) the resulting silver crystals are collected,

c) freed of the organic solvent and

d) then heat treated at a temperature between 50°C and the melting point of silver. 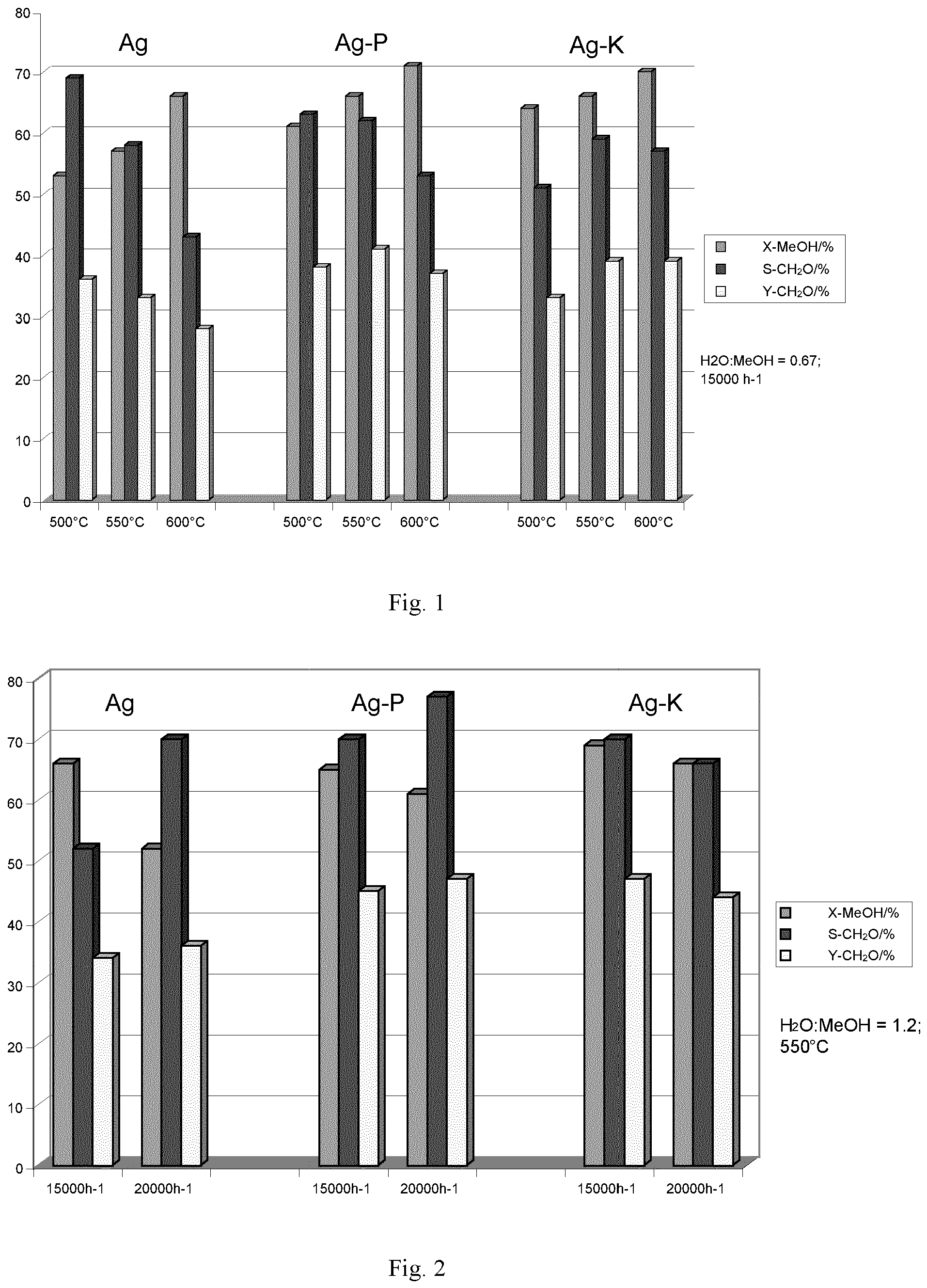 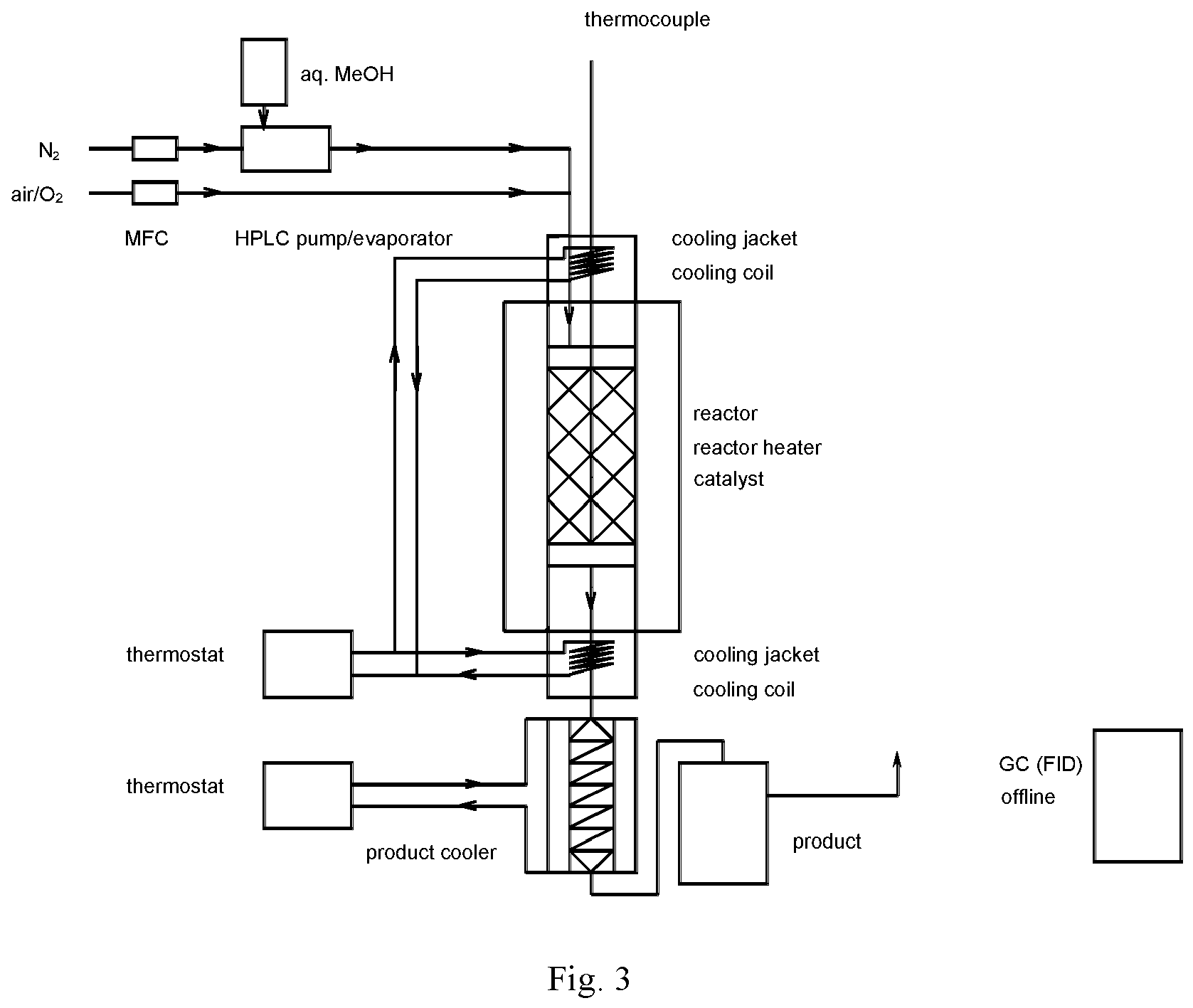 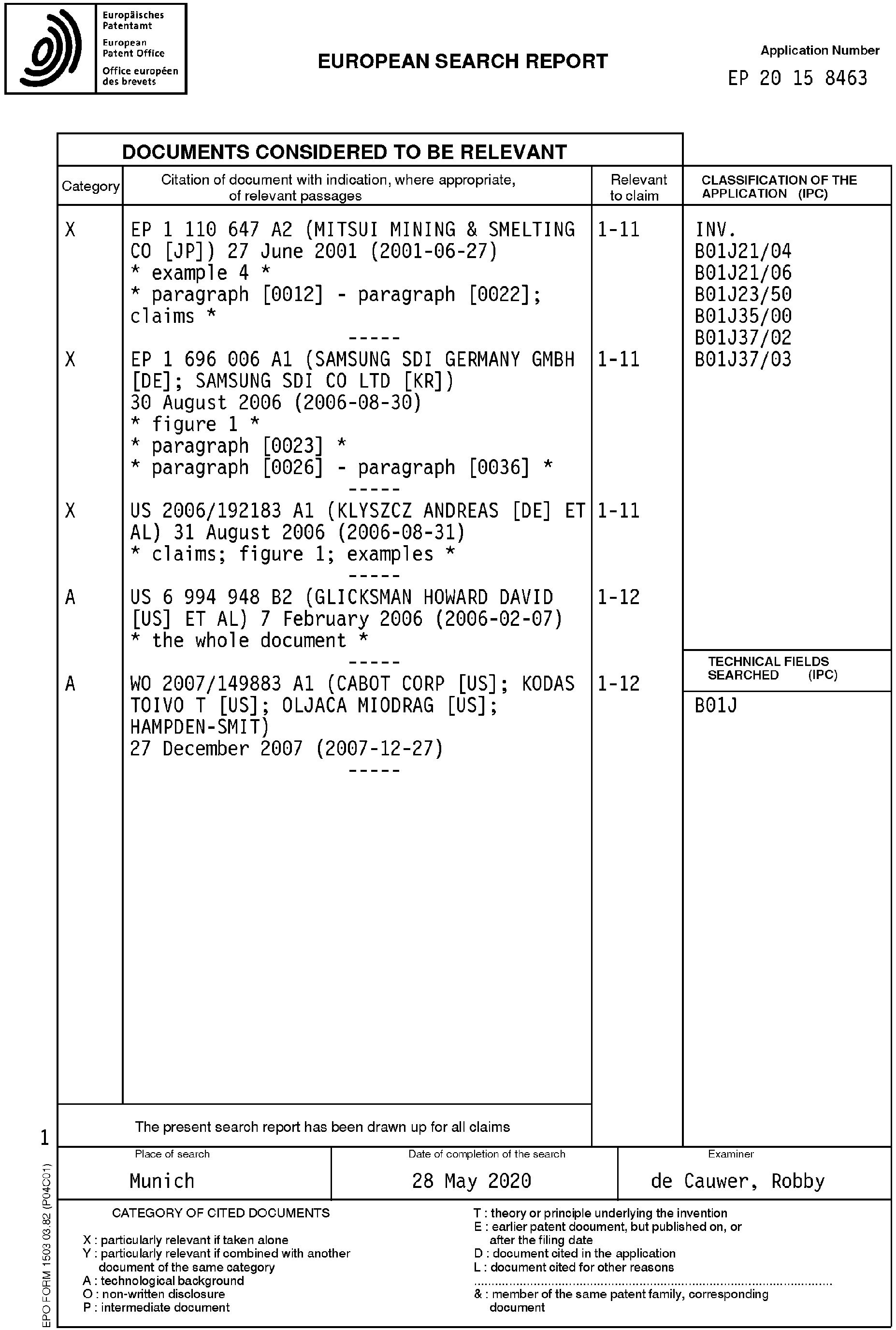 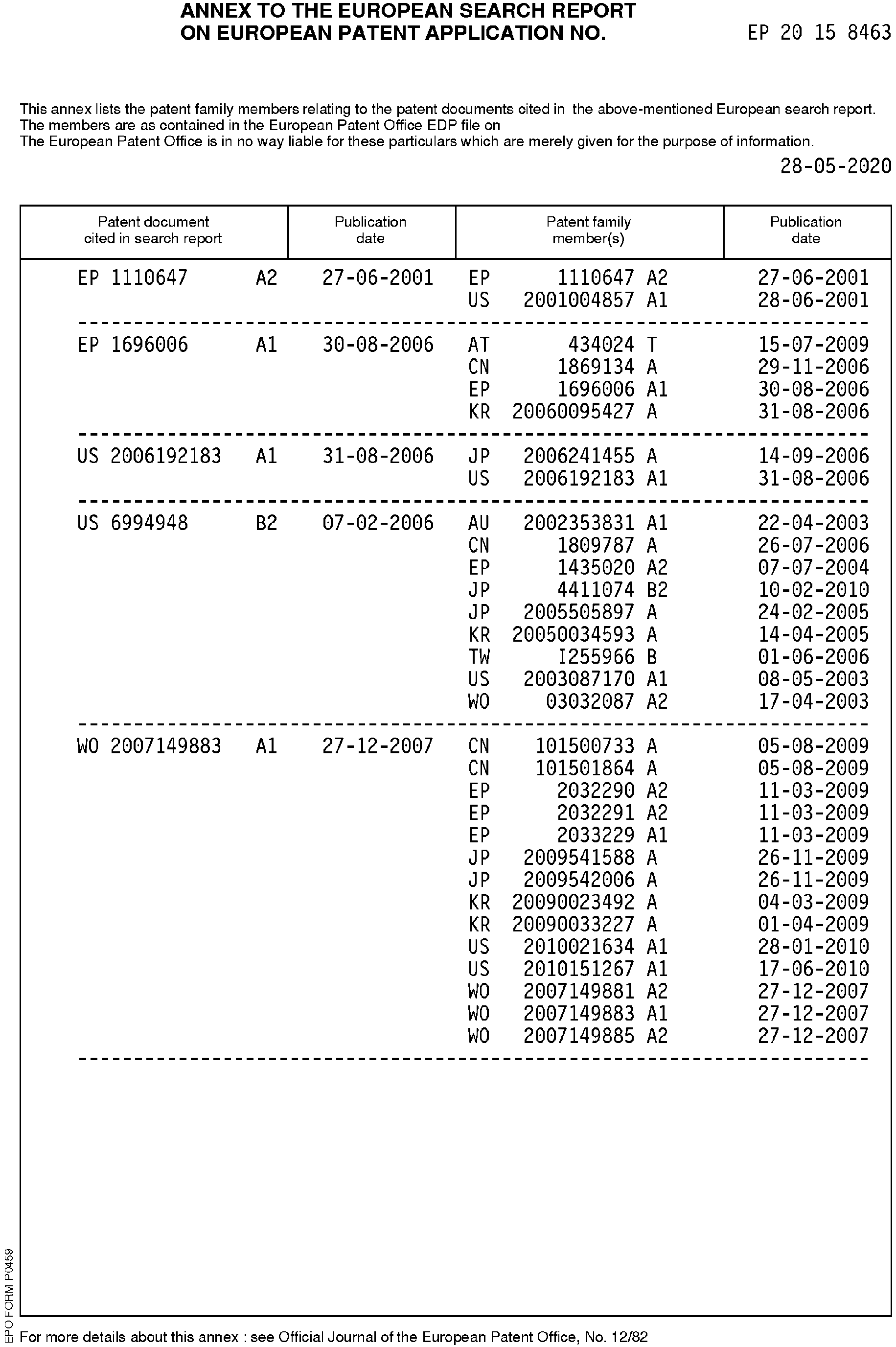