[0002] Surgical needles and attached surgical sutures are well known in the art. Surgical needles and sutures are packaged in a variety of packages for delivery of the needles and sutures to the surgeon. The packages need to have a number of important characteristics, including ease of loading, ease of dispensing, and protection of the needle and the suture during handling, sterilization, shipping and storage.
[0003] Attaching surgical sutures to needles is well known in the art. Surgical needles and sutures have historically been attached by hand with a setup time between 20 and 30 minutes using a simple crimping die. The manual operators are typically able to do five to six parts per minute. This manual process has the suture and needle combination handed off to either a manual hand winding process, or the combination can be hand fed into an automatic winding machine. There are some attached swage wind combinations but these cannot be hand fed into an automatic winding machine. These swage wind combinations typically have expensive swage tools that can require up to 120 minutes for changeover and setup.
[0004] The machines currently in use for automatically attaching needles to suture are usually quite slow. Approximately, seven to ten parts can be attached per minute and the machines require 45 to 60 minutes to be set up. Automated equipment can require up to two hours for changeover.
[0005] There is a need in this art for a novel automated suture attaching process that overcomes the deficiencies of the prior art. Furthermore, there is a need in this art to shorten the changeover time from a large needle suture combination to a small needle suture combination.

[0006] Proceeding from this previously known prior art, it is an object of the present invention to provide a novel suture winding machine with allows for automatically loading and winding micro needles and micro sutures and which can be easily adapted from automatically loading to manual loading in order to allow for faster winding of the suture.
[0007] Accordingly, a novel apparatus for attaching surgical sutures to needles and loading them into a winding machine is disclosed.
[0008] In the science of attaching the suture to the needle it is imperative that the centre of the needle and the centre of the suture are known. It is critical how the needle is held prior to the insertion of the suture into the hole in the end of the needle as each type of needle has a different outside diameter. Furthermore, the hole in the end of the needle might be based off the centre of that diameter.
[0009] The outside diameter of the suture has very little clearance for insertion and the outside diameter of the suture also changes with the size of the suture. Therefore, it is critical to know where the centre of the suture is. This is achieved by guiding the suture along the suture path using V grooved guides. The use of the V grooved guides is well known in the art. For the final guiding of the suture into the hole of the needle a very precise system is needed. It is possible to use a funnel which needs to be perfectly aligned with the needle and therefore also perfectly aligned with the crimping dies used to centre the needles.
[0010] The needle needs to be located in both the horizontal and the vertical position. The location of the horizontal position is controlled by the location tolerance on the crimping die. Therefore, this position is well repeatable when dies are changed out. The location of the vertical position is controlled by the length of the die. This position changes every time a die is reworked. So the upper and the lower die must be adjusted separately using hand tools like wrenches to move a screw up or down or to slowly close the dies separately until the centre is located. This type of setup using screw adjustment causes the need of readjustment over and over again. Therefore, the efficiency is low as the initial setup could take up to 60 minutes to complete. Therefore, a more efficient method of finding the centre of the dies regardless of the length of the needle was developed. Next we will describe the device that well enable the machine to automatically go to the vertical centre after new dies are installed.
[0011] The needle suture attaching station of this apparatus has a novel die setup arrangement. Most dies vary in height due to rework and it can take quite some time to offset this variance. Therefore, the present invention has a digital measuring station to measure the height of the die. The measurements can then be downloaded to the suture attaching station where it is normalized to a set zero point. Alternatively, the measurements can be manually entered at the HMI. This method reduces the setup time of the crimping die to a maximum of five minutes, keeping changeover to a minimum. This measuring station could be offline. The rest of the automatic crimping is well known in the art but the footprint has been reduced by simplifying the suture infeed process.
[0012] The interface between the suture attaching machine and the winding machine is a hand off to one of two infeed lines. One of the infeed lines is a straight motion to the winding machine with its robot grippers for gripping the needles and placing them into a needle park or a foam park of the tray. When this infeed line is not in use, the suture attaching machine offloads to a bin where the needle and suture combinations are stacked into bundles and can be manually offloaded. The second one of the infeed lines is at a 90-degree angle to allow for hand feeding of bundles needle and suture combinations. In this case, the sutures could have been hand crimped because of the small batch size or because they are a combination smaller than USP 5/0.
[0013] The infeed slides of the infeed lines allow for the manual placing of the needle to be transported to the pickup station of the winding machine. This is designed to accommodate single and double armed sutures down to 5/0 and single arm sutures below 5/0. With a quick change of the robot grippers it could also accommodate needles down to 8 millimetres to 8 / 0 sutures.
[0014] These and other features and advantages of the present invention will become more apparent from the following description and accompanying drawings.
[0015] Further advantages and features of the invention can be gathered from the features which are further specified in the claims and from the following exemplary embodiments.

[0016] In the following text, the invention will be described and explained in greater detail using the exemplary embodiments which are shown in the drawings. 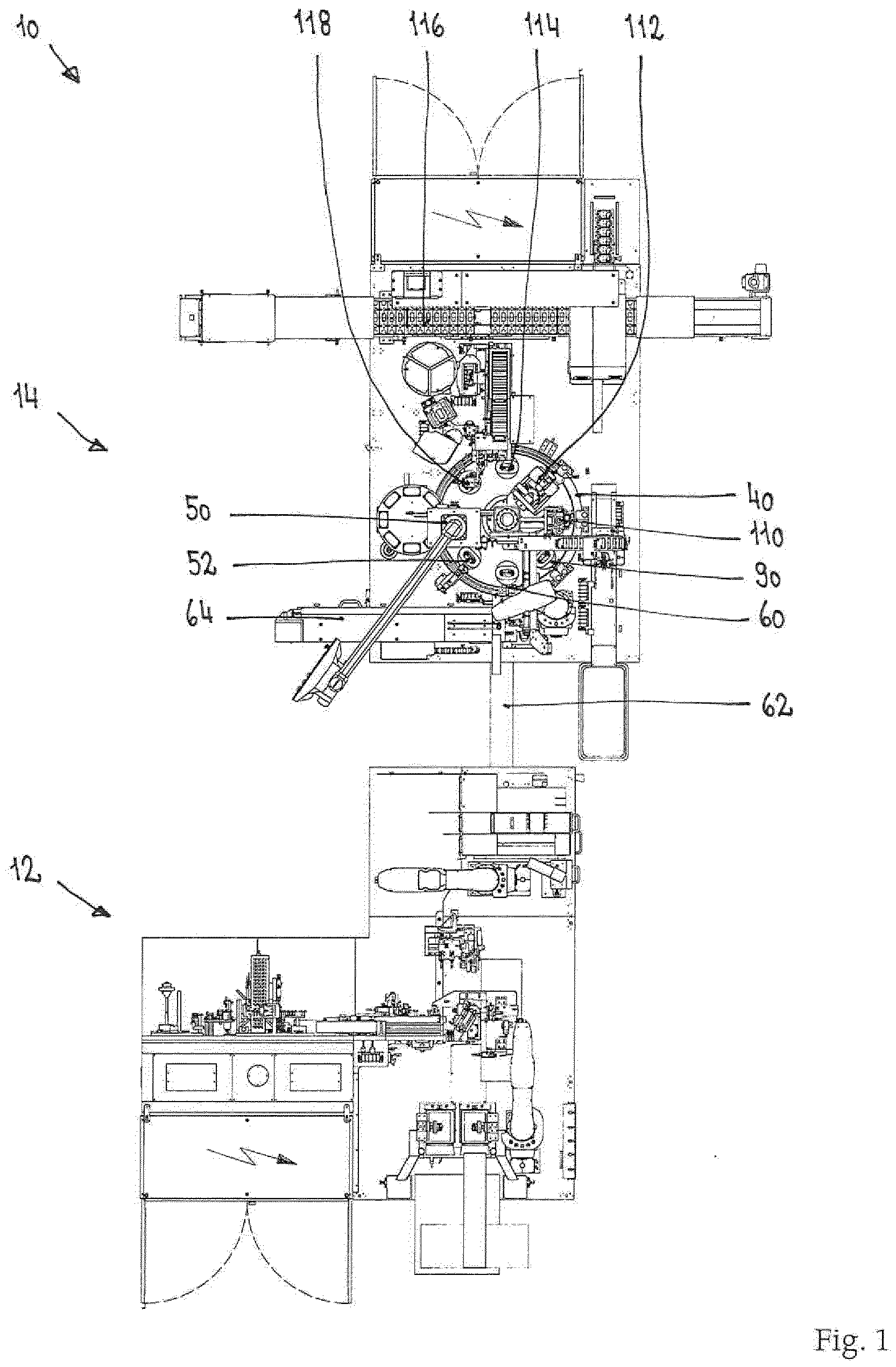 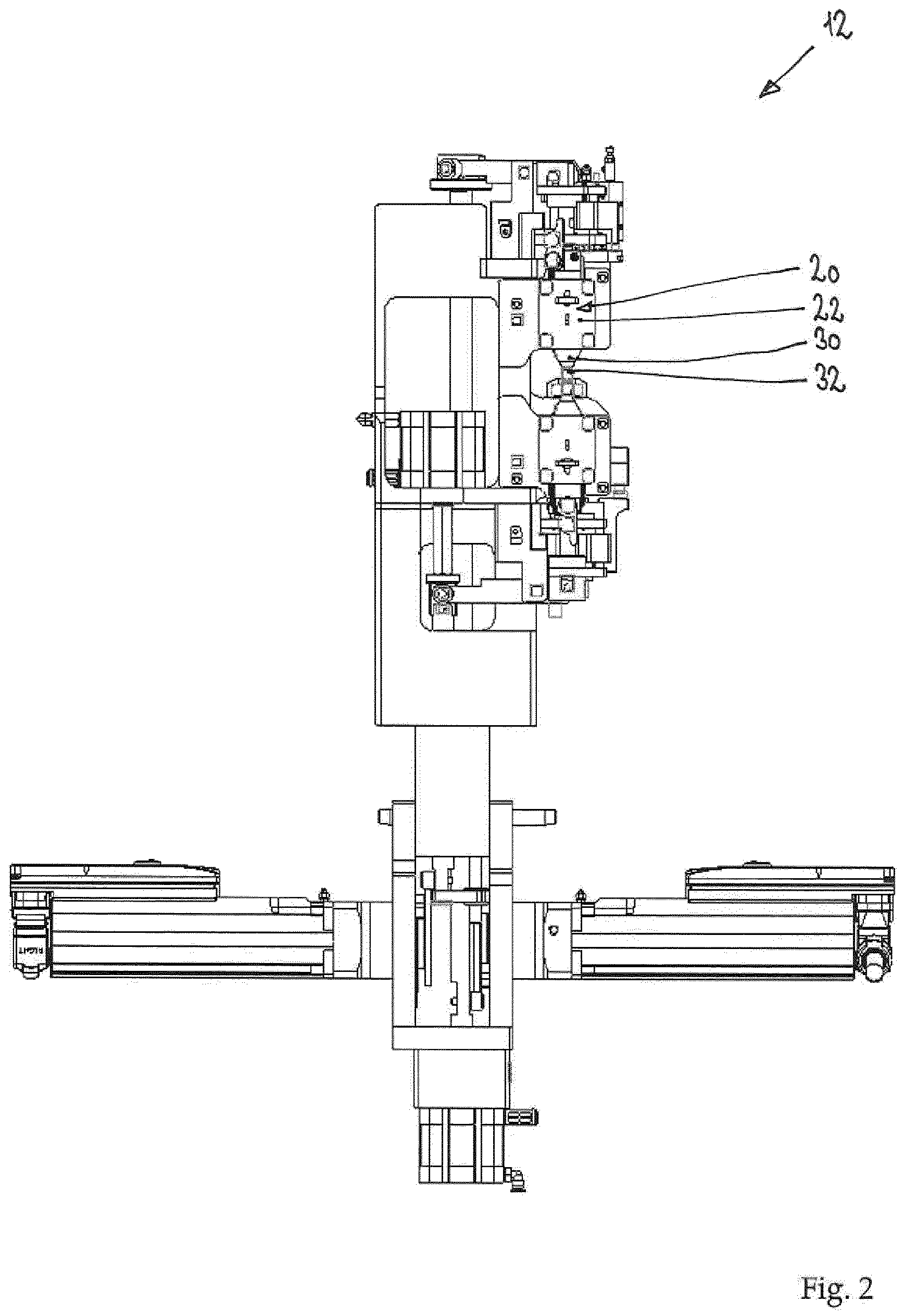 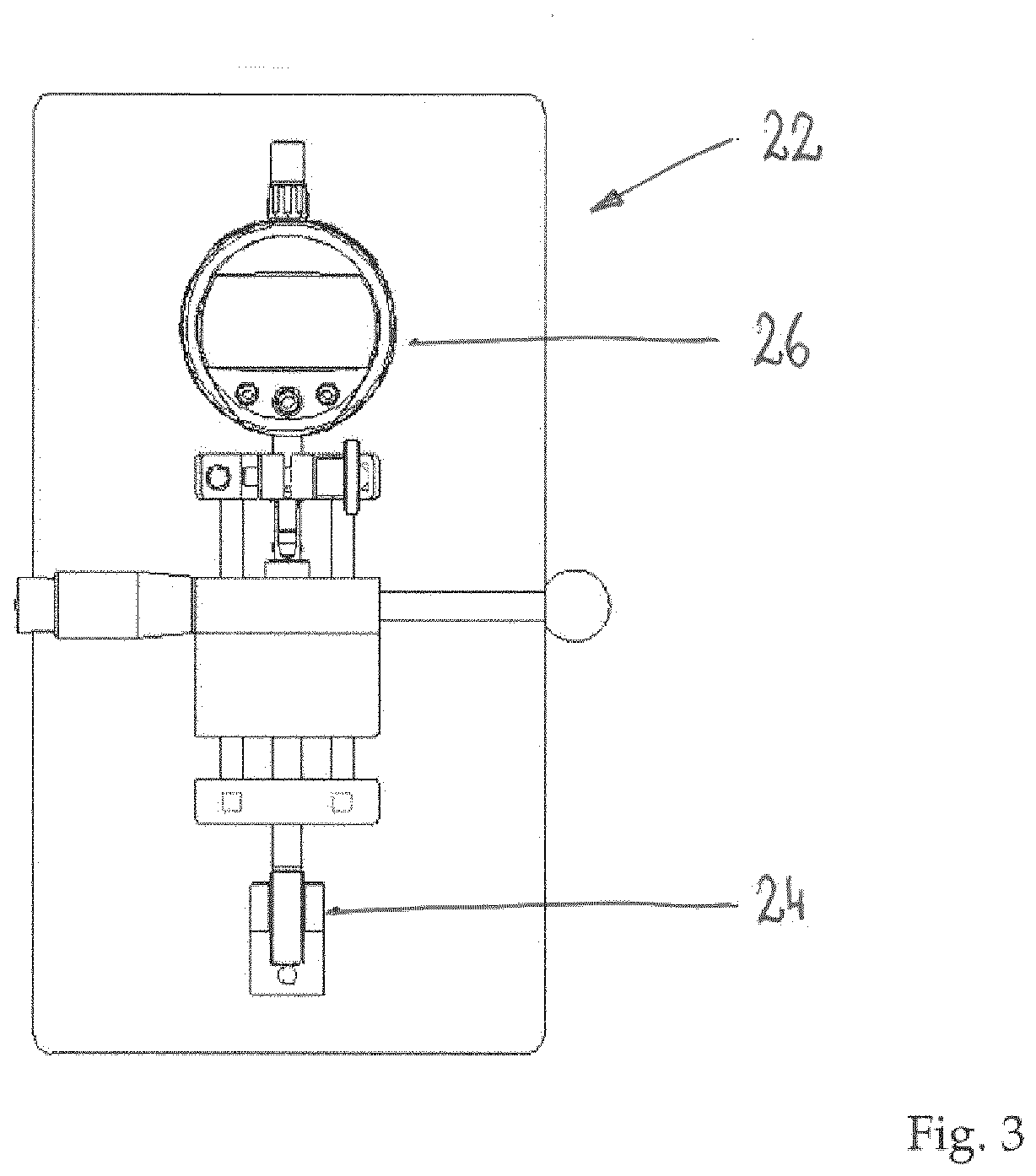 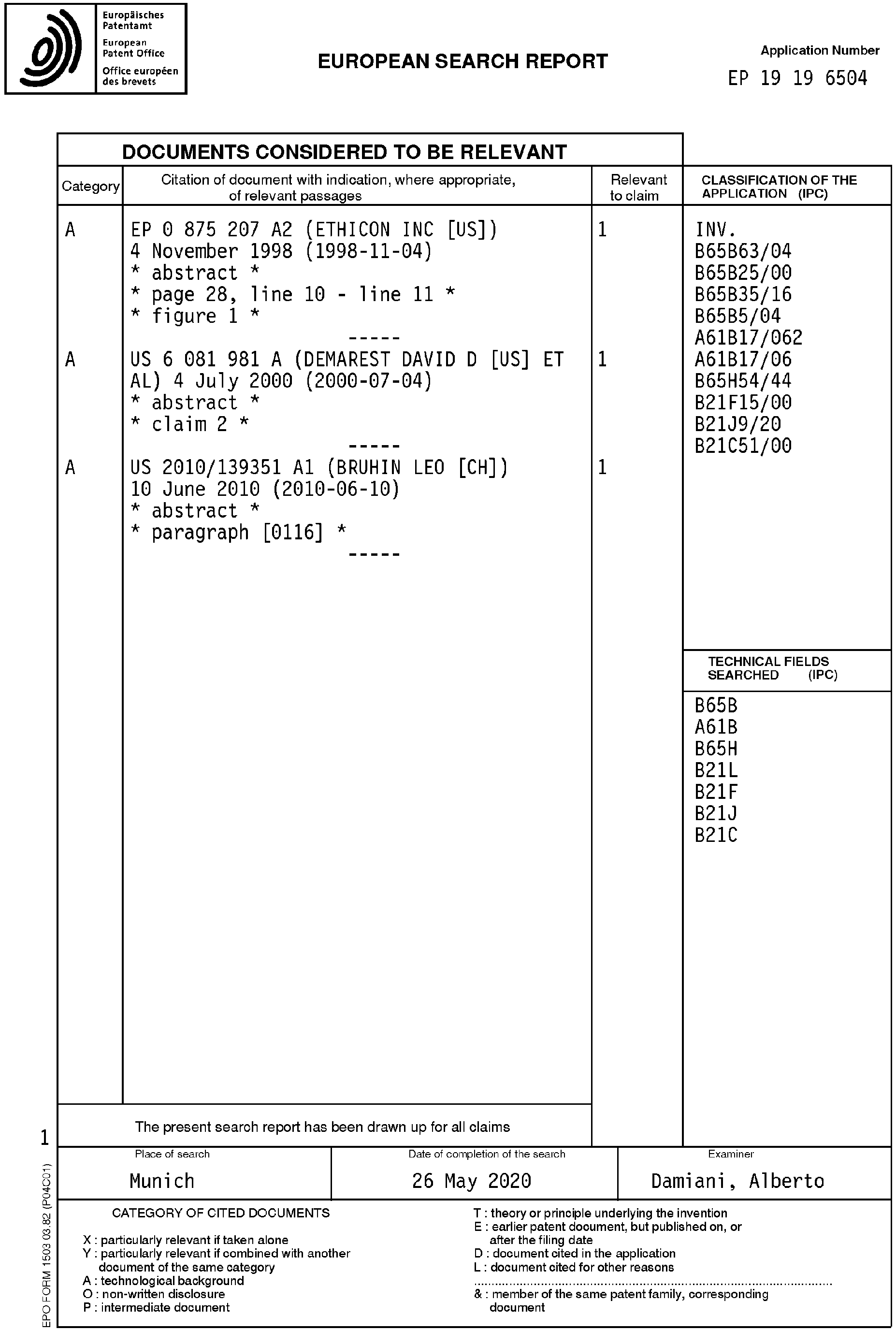 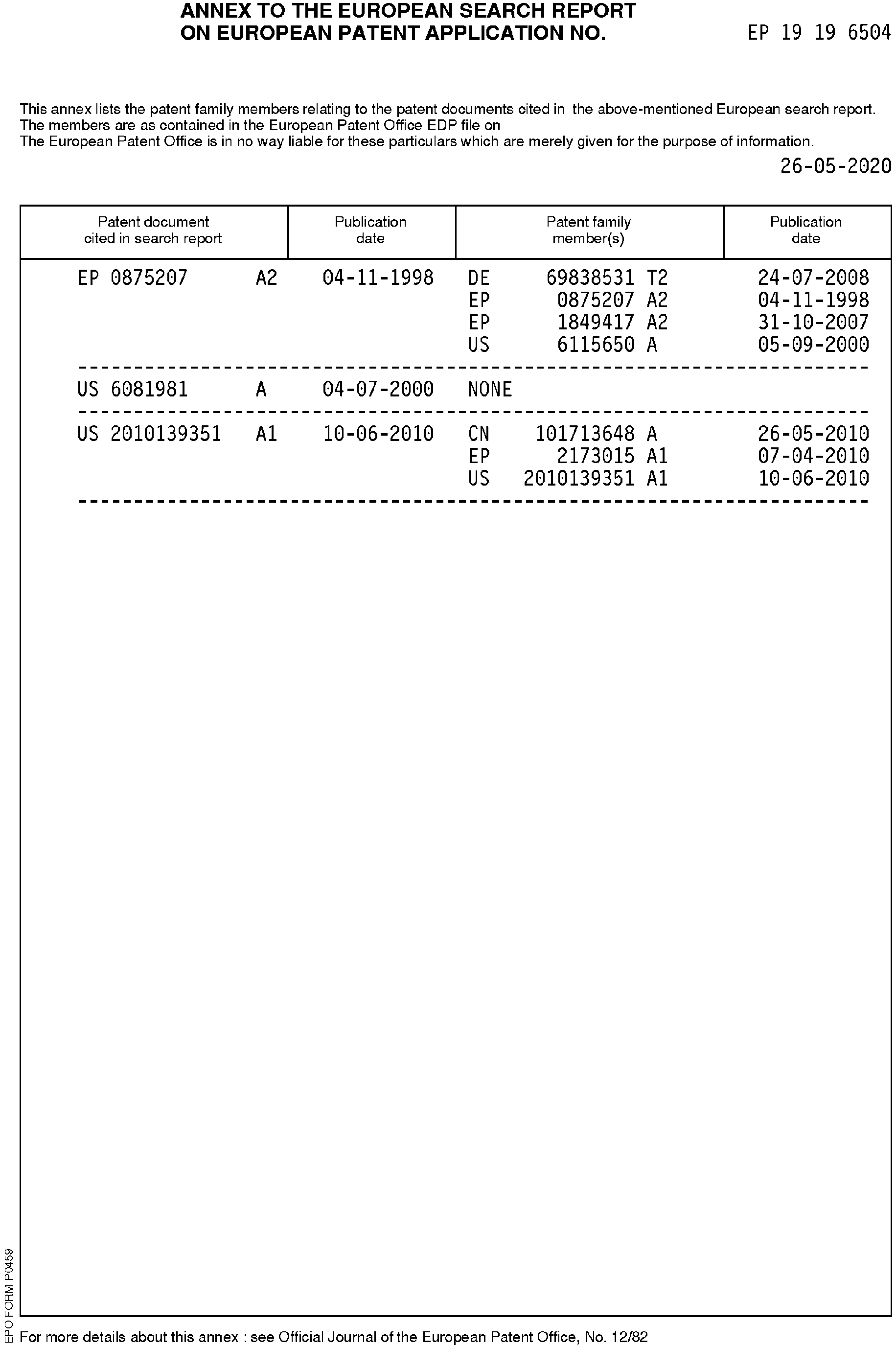