[0001] Exploring, drilling and completing hydrocarbon and other wells are generally complicated, time consuming and ultimately very expensive endeavors. This is particularly true in the case of offshore operations where expenses may grow exponentially long after the completion of the well. For example, subsequent routine intervention and maintenance may require considerable more time, effort and cost at the subsea oilfield.
[0002] In recognition of these potentially enormous expenses, added emphasis has been placed on well monitoring and maintenance throughout the life of the well. That is, placing added emphasis on increasing the life and productivity of a given well may help ensure that the well provides a healthy return on the significant investment involved in its completion. So, for example, it may be of benefit to cost effectively monitor well conditions such as pressure, temperature, or production fluid types and flow with an accurate flowmeter and in real-time where possible. Of course, what is cost effective may depend on the circumstances.
[0003] In the case of subsea operations, production fluids often present in a variety of different ways. For example, produced fluids may be multiphase in nature with a portion of the fluid being gas mixed with the oil-water liquid fraction of the fluid. Managing production of such fluids may be a challenge given the need to maintain a certain percentage of the fluid in liquid form in order to ensure maintaining effective production.
[0004] Similarly, production fluids may include a variety of particulate, most notably sand. That is, just as the production fluid is prone to be multiphase with perhaps a significant amount in gas fraction, it may also include a fair amount of particulate. Sand production, in particular is a common particulate that is produced with subsea production fluids.
[0005] Just as there is an ongoing need to monitor and manage multiphase fluid production in the subsea environment, there is also an ongoing need to monitor and manage particulate and sand production in order to ensure efficient production and minimize plugging and/or hardware erosion. For example, where sand is produced, an overall management system may need to be implemented in order to minimize, manage and deal with the particulate. This may range from the use of filters to more complex separator equipment. As with water production, failure to effectively manage the over-production of sand and other debris may lead to costly shutdowns in operations. By the same token, where effectively managed, a field may produce several thousands of barrels of sand per day and yet remain efficient and operational.
[0006] Of course, effectively managing the production of sand and other debris requires optimizing techniques for managing such production. This, in turn, requires the ability to monitor the amount, rate and other characteristics of the fluid production as it relates to the particulate. The more accurate the particulate monitoring, the more informed and effective the sand management operation.
[0007] Unfortunately, current techniques for ascertaining the production of sand and other troublesome debris rely on technology that is inherently limited in terms of accuracy. Specifically, a transducer is generally associated with a production line at a strategic location such as near or after a bend in the line. So, for example, acoustics generated by sand impacting the interior of the line at the bend as production flow passes the transducer may be detected by this transducer. In theory, this acoustic information may then be utilized to estimate the amount of sand in the flowing production fluid at any given point in time.
[0008] While the detected information may be of some value, its accuracy in terms of the actual amount of sand being produced with the production fluid is nearly impossible to determine. For example, the production of fluid, even absent any sand production is generally going to be responsible for some percentage of the detected acoustics at the transducer. How much may be a factor of production fluid properties, pump noise, the dimensions of the line, surrounding hardware and other operational characteristics. Once more, even acoustic detections which are directly attributable to sand and debris may not be entirely informative.
[0009] Consider the fact that the same sand particle may impact the interior of the line both upstream and downstream of the transducer location or not at all. Similarly, whether the impact is upstream or downstream of the transducer, the uncertainty of how far it was from the transducer is another variable. How to account for such random variability in impacts remains the subject of debate. Once more, factors such as acoustics through the line or pipe structure may depend on a host of added factors such as pipe thickness and material structure. All in all, while such information may be of value, operators continue to rely on a fair amount of unreliable acoustic data and additional guesswork when it comes to managing the production of sand and other debris. As a result, over-stressed separators and increased shutdowns remain likely occurrences for fields producing high amounts of sand.

[0010] A particulate monitoring assembly is provided that is incorporated into a conduit coupled to a production line at an oilfield. The assembly includes a flow restriction in the conduit coupled to the production line to homogenize production fluid flowing therethrough. A detector at a downstream location from the flow restriction may be utilized to acquire acoustic data reflective of particulate in the production flow. In one embodiment, the detector includes a transducer within a housing with an acoustic noise mitigating component. This acoustic noise mitigating component may be a rib or a polymeric seal, potentially depending on intended subsea or topside usage.

Fig. 1A is a cross-sectional schematic representation of an embodiment of an oilfield production particulate monitor.

Fig. 1B is an enlarged detailed view of a target detector location of the monitor downstream of a restriction taken from 1-1 of Fig. 1A.

Fig. 2 is an enlarged detailed view of the target detector location of the monitor as depicted in Fig. 1B, illustrating detector components.

Fig. 3 is an enlarged schematic view of the oilfield production particulate monitor of Fig. 1 with the detector components and surrounding hardware.

Fig. 4 is a perspective overview of a subsea oilfield with a unit housing the production particulate monitor of Fig. 3 for management of particulate production.

Fig. 5 is a flow-chart summarizing an embodiment of employing a particulate production monitor at an oilfield during production.

1. A particulate monitoring assembly for coupling to a conduit line supporting fluid flow, the assembly comprising:

a flowline to couple to the conduit line supporting the fluid flow through the assembly, the fluid including particulate;

a flow restriction within the flowline to intersect the fluid flow through the assembly;

a detector for detecting a portion of the particulate impacting a face of the detector, the detector positioned at a location that is adjacent; and

an attenuating architectural component of the assembly for mitigating acoustical noise from another portion of the particulate impacting structure of the flowline.

2. The assembly of claim 1 wherein the face is one of downstream from the restriction, aligned with a central axis of the flowline and substantially perpendicular to the fluid flow through the assembly.

3. The assembly of claim 1 or 2 wherein the face is constructed of a material that is of greater erosion resistance to the fluid flow than the structure of the flowline.

4. The assembly of claim 1, 2 or 3 wherein the detector comprises a transducer located within a transducer housing that accommodates the face of the detector, the transducer physically coupled to the face to facilitate the detecting of the particulate, the face isolated from direct mechanical coupling to the structure of the flowline.

5. The assembly of claim 4 further comprising a detector housing for accommodating the transducer housing and electronics to obtain acoustic data representing the portion of the particulate impacting the face of the detector from the transducer for management thereof.

7. A system for monitoring particulate in a production fluid flow at an oilfield, the system comprising:

a production line for routing the production fluid flow from at least one well at the oilfield;

a monitoring unit coupled to the production line for routing the fluid flow through a restriction to a detector adjacently downstream thereof, the detector having a transducer to detect particulate impacting a face thereof and a ribbed profile for attenuating acoustics from sources not impacting the face.

8. The system of claim 7 wherein the monitoring unit is a compact modular and manually transportable unit.

9. The system of claim 7 or 8 further comprising a separator for extracting the particulate from the fluid flow, the separator managed based on data from the detector.

10. The system of claim 7, 8 or 9 wherein the particulate is selected from a group consisting of sand, proppant and debris greater than about 25 microns.

11. The system of any one of the claims 7 - 10 wherein production fluid further comprises a gas fraction, wherein the restriction is preferably accommodated by one of a venturi flowmeter, a flow nozzle and an orifice plate.

12. A method of monitoring particulate in a production fluid from a well at an oilfield, the method comprising:

flowing the production fluid through a restriction;

obtaining acoustic particle data from the fluid at a detector positioned adjacently downstream of the restriction; and

attenuating acoustic noise generated at locations apart from the detector during the obtaining.

13. The method of claim 12 wherein the attenuating comprises employing a polymeric seal at an interface between the detector and a structure of a flowline defining a fluid path for the production fluid flow or employing a ribbed profile of a transducer housing of the detector to mitigate detection of acoustics from the locations apart from the detector.

14. The method of claim 12 or 13 further comprising acquiring multi-phase production flow data from the restriction during the flowing of the production fluid therethrough.

managing the detected acoustic data with a processor coupled to a transducer of the detector, preferably comprising tuning the processor to a frequency range of between about 100 kHz and about 1 MHz to filter data in advance of the managing thereof; and

adjusting particulate separation parameters of oilfield operations based on the managed data. 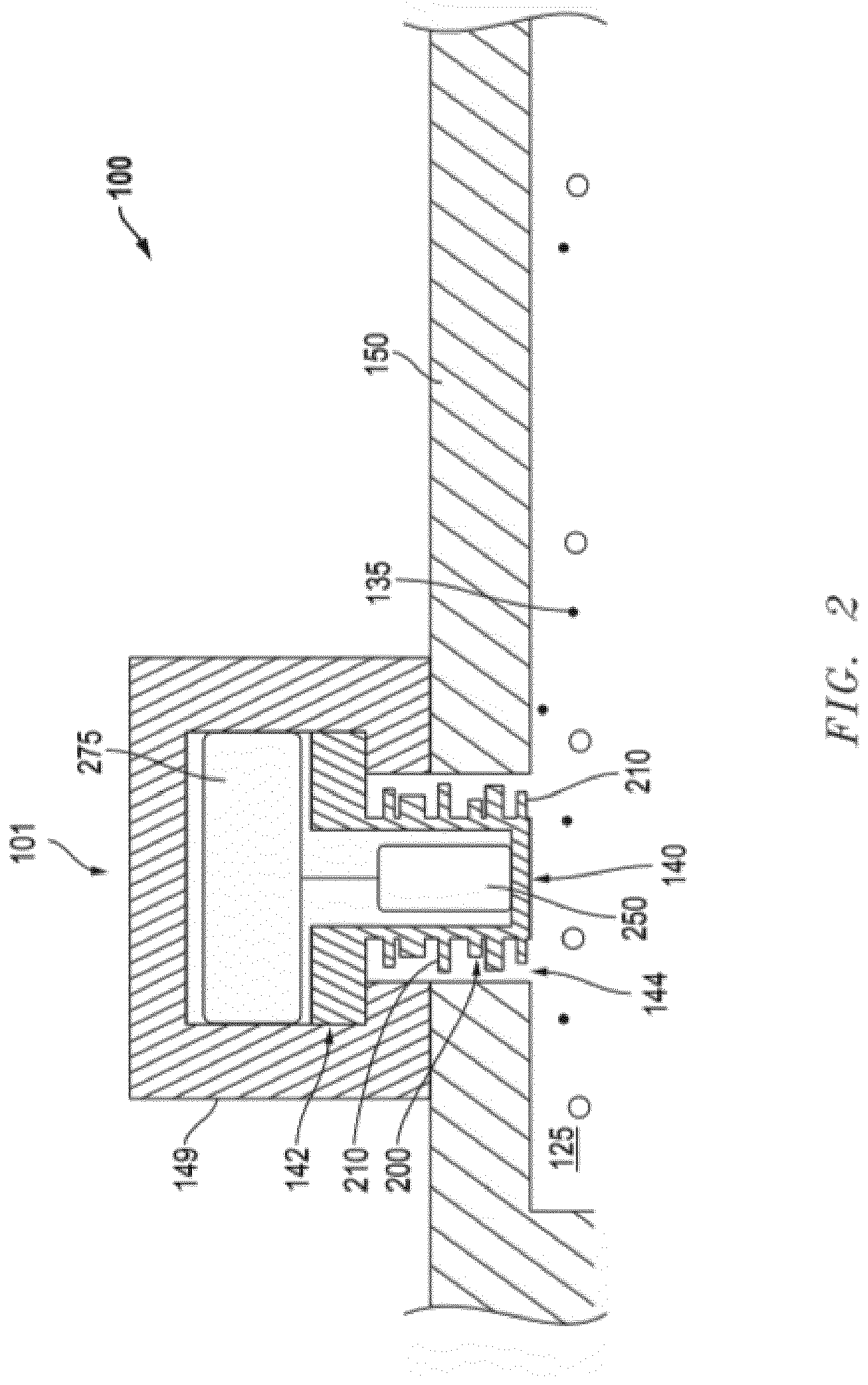 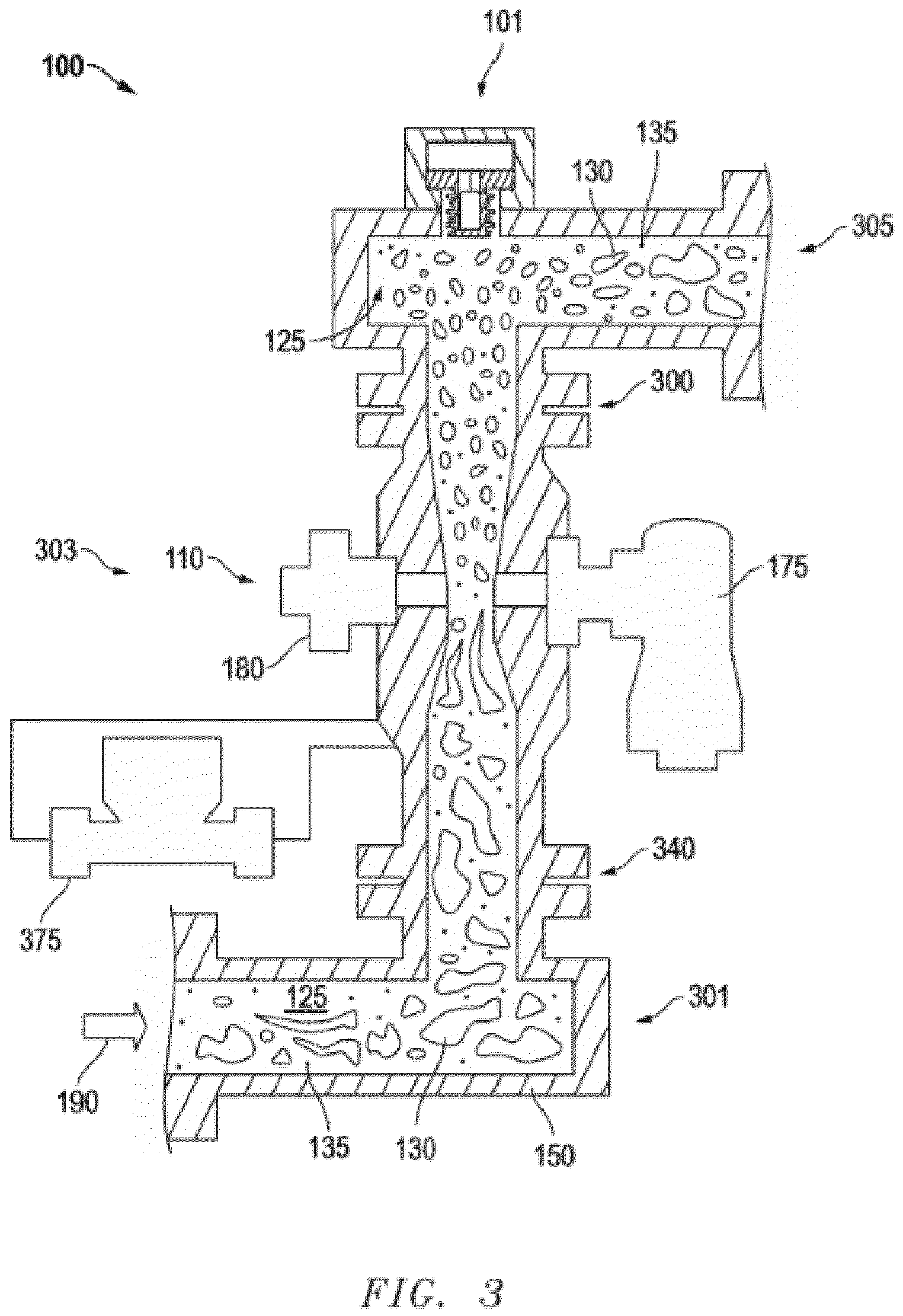 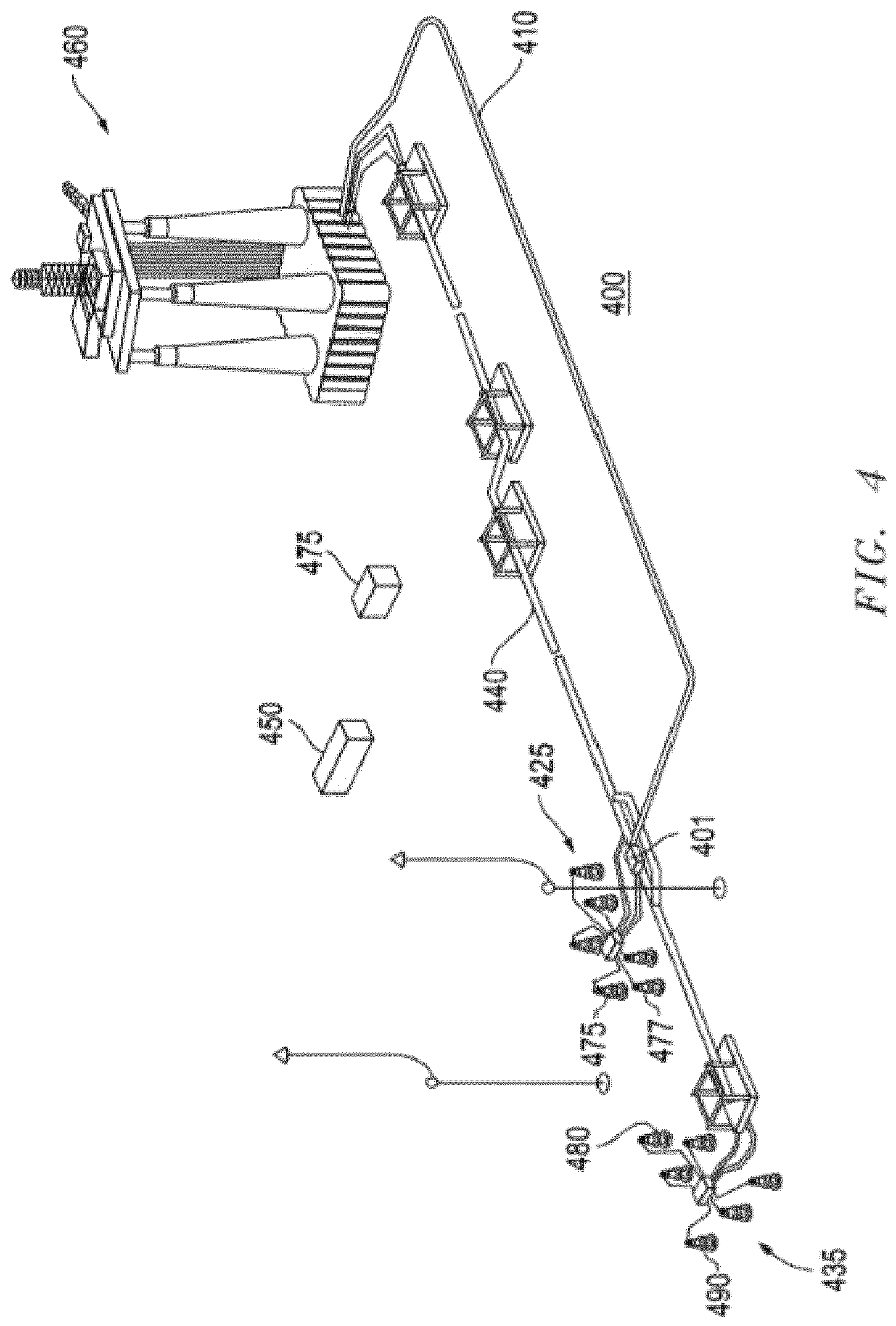 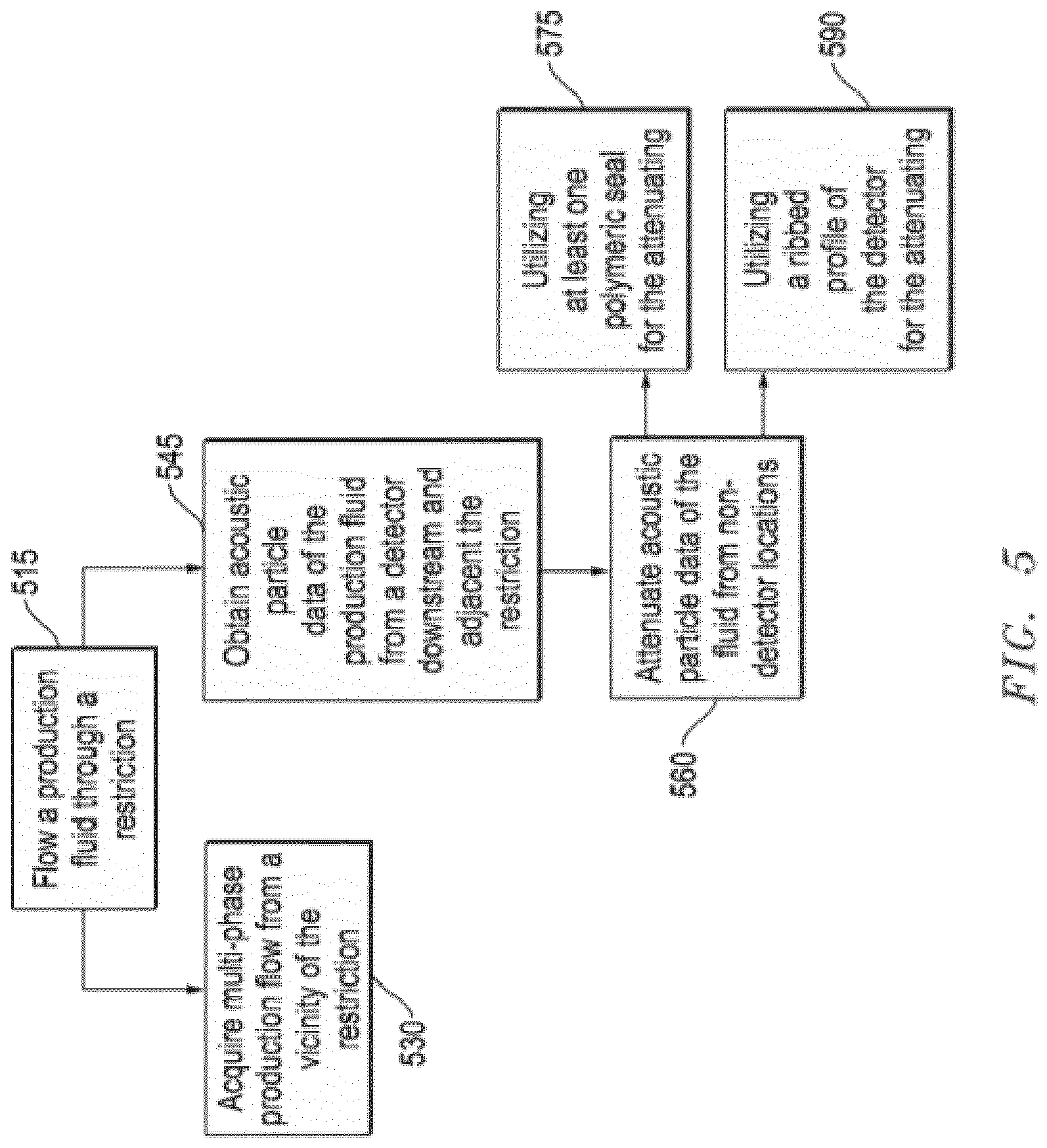 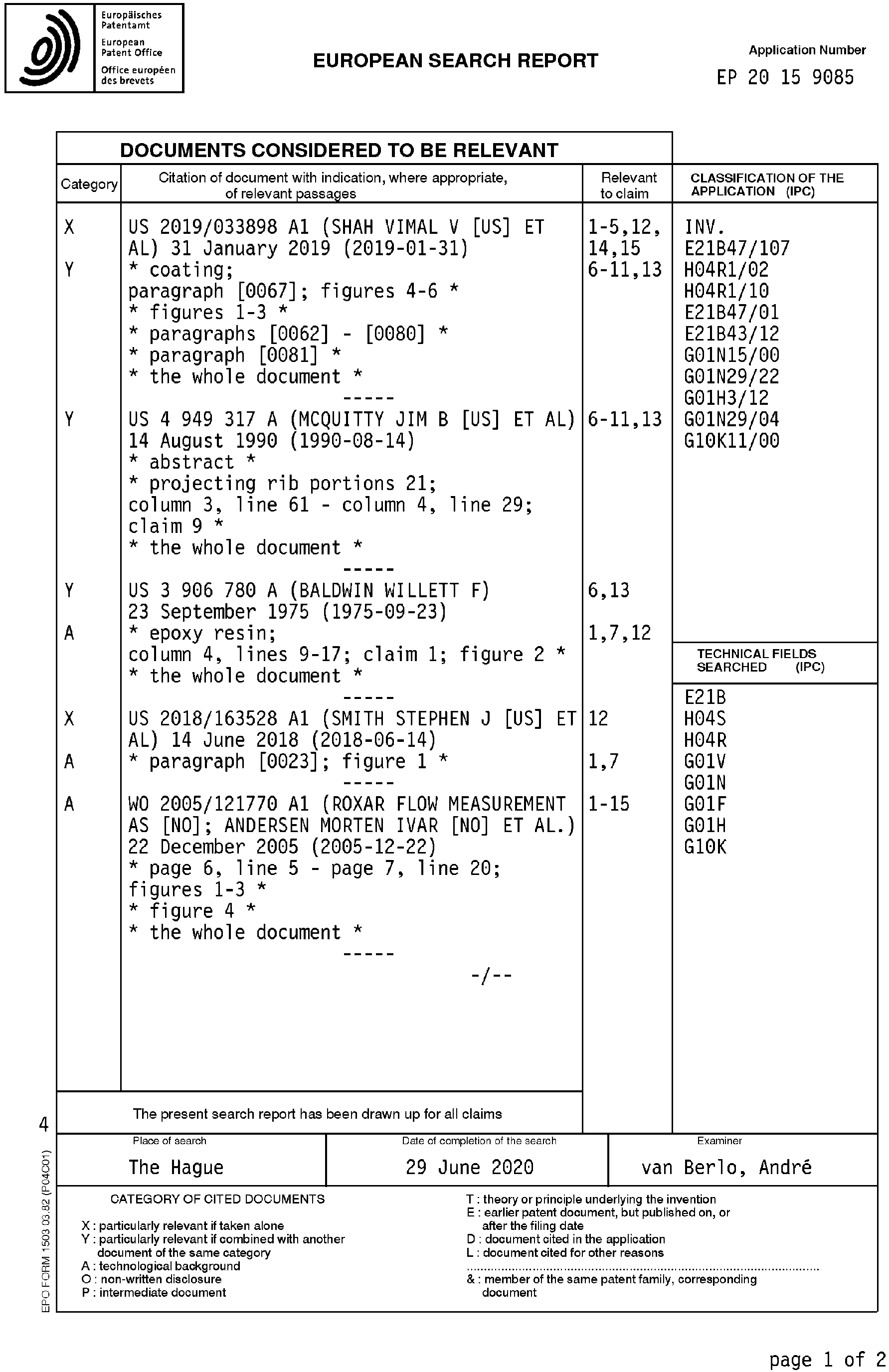 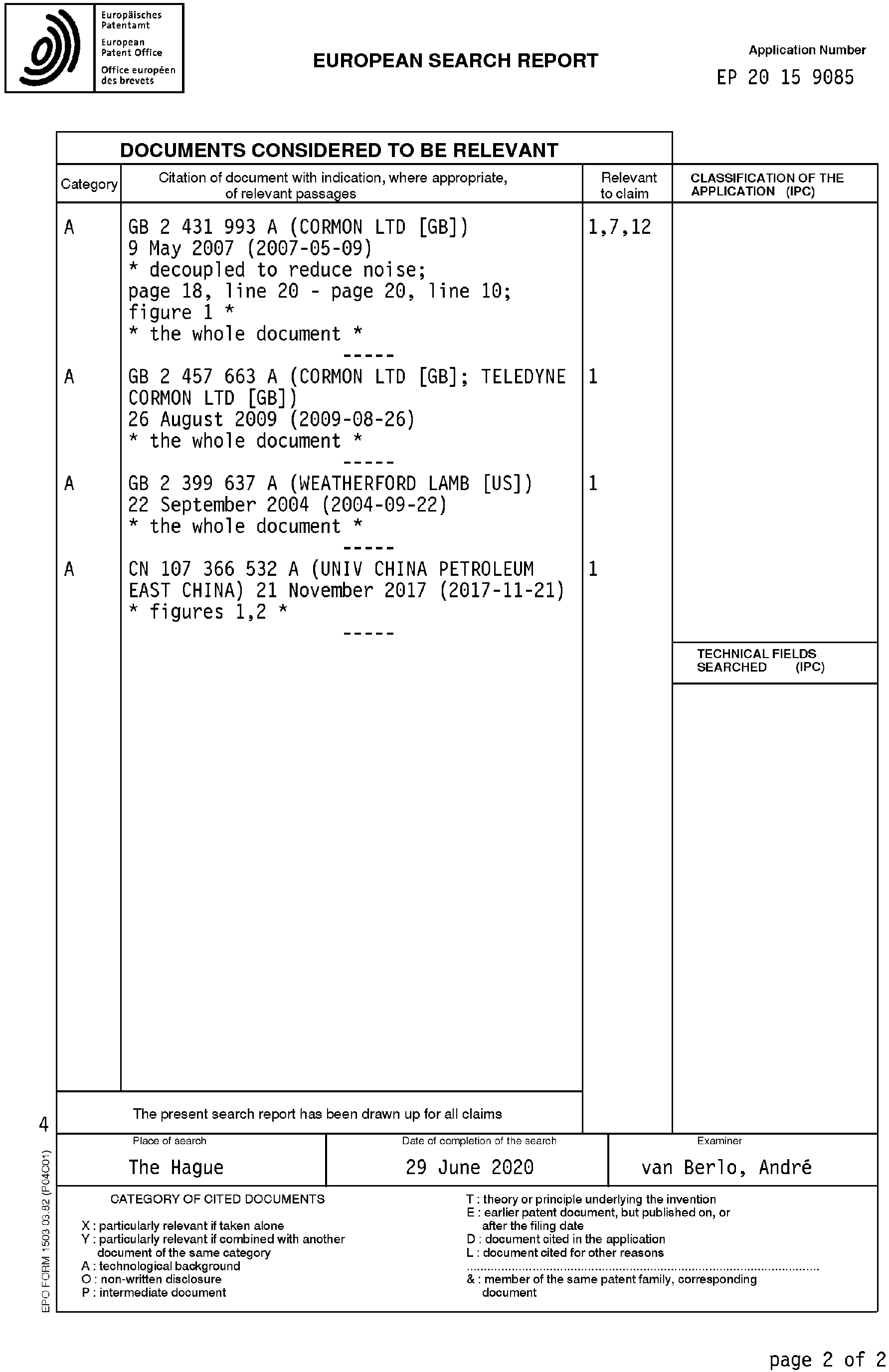 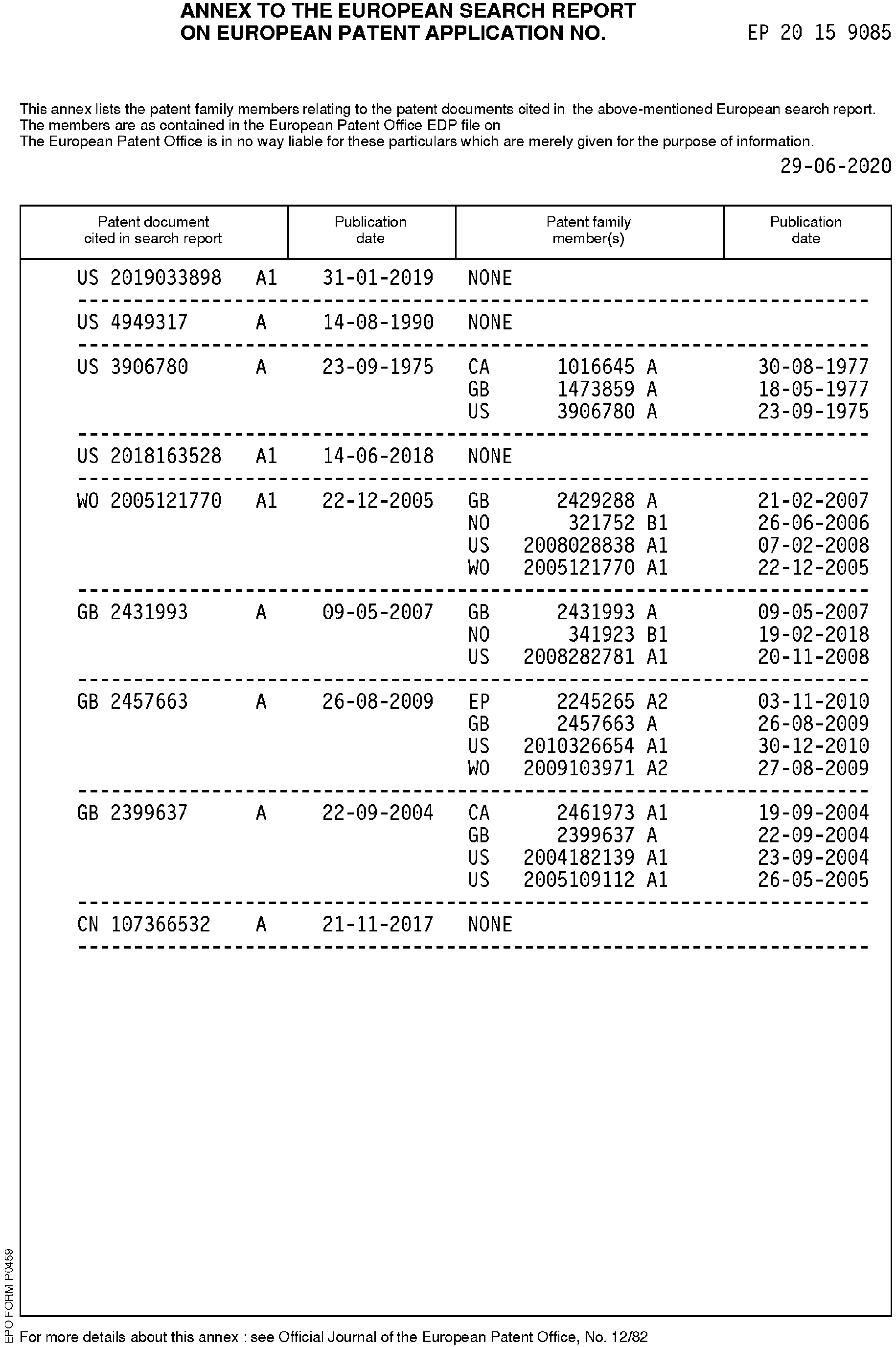