[0001] This invention relates generally to operational control of an electric toothbrush, and more specifically concerns the use and selection of various operational modes for an electric toothbrush.
[0002] Some electric toothbrushes have multiple modes of operation which may be selected by a user via control buttons on the body of the toothbrush, the control buttons generally referred to as a "user interface". Each mode will typically have a different brushing action; for instance, a normal mode may be particularly adapted for normal brushing/cleansing of the teeth, while a gentle mode might have an action which has less brush movement and/or moves at a slower rate. Another mode could be a massage mode in which the brush has a pulsing action.
[0003] These modes are illustrative only of the various mode possibilities. Typically, an operating mode, once selected, will control the operation of the toothbrush for an entire brushing event, i.e. for two minutes. If it is desired by a particular user to combine different modes within a single event time, i.e. two or more modes within a two-minute time, the user must manipulate the user interface controls to create such a specific mode/time profile manually every time that particular profile is desired. This is often too complex or inconvenient for a user to consistently and reliably accomplish. Hence, there is a need for simple controls to result in complex brushing profiles for a single brushing event. Such controls could be particularly desirable for those mode/time profiles which are known to produce beneficial effects. It would be advantageous for the users to have such a desirable profile available to them by a simple, straightforward control operation.
[0004] In addition, it is often desirable to have a simple means to extend the brushing time by a selected short period of time, i.e. 30 seconds. Typically, this is accomplished at the present time is by simply pushing the on/off button again following termination of the normal event, and then terminating the brushing manually when the desired additional time of brushing has elapsed. This, however, is often difficult to monitor.
[0005] Lastly, there are some special brushing circumstances such as encouraging children to brush appropriately and for a full desired time, which may be enhanced by a specialized brush arrangement which could be broadly categorized as a particular mode of operation. Also, it would be desirable to maintain a record of children's brushing with a convenient readout for parental monitoring of children's brushing patterns.
[0006] It is thus desirable that an electric toothbrush be arranged and adapted to provide an increased operating mode capability, while being simple in mode selection, thereby increasing the beneficial use of the electric toothbrush for the user.
[0007] Accordingly, disclosed herein is a system for operating an electric toothbrush in more than one mode of operation during a brushing event, comprising: an electric toothbrush with a toothbrush body, a brushhead, a motor for driving the brushhead and a controller for the motor, the controller being pre-programmed to produce at least one mode/time profile of operation in which the toothbrush operates in one operational mode for one selected time and then automatically changes, in accordance with a program, to at least one other operational mode for another selected time, different than the first operational mode, during a single brushing event, wherein the selected times for the operational modes add up to the time of a single brushing event; and a user interface operable by a user to initiate the mode/time profile operation.
[0008] Also disclosed is a system for extending the time of automatic operation of an electric toothbrush, comprising: a control system for the toothbrush which controls the operation of a brushhead portion of the toothbrush, the control system having a pre-programmed capability of providing a selected amount of additional time for operation of the toothbrush substantially immediately subsequent to the termination of a brushing event, the additional time being substantially less than the time of a single brushing event.
[0009] Also disclosed is a system to encourage brushing by children who are using an electric toothbrush, comprising: a display device for a power toothbrush which is in use, the display device including a display program in which a selected article progresses visually from an initial state to a final desired state as use of the toothbrush continues from the time it is turned on to the end of a desired time period for a brushing event.
[0010] Also disclosed is a system for adjusting operating characteristics of a power toothbrush for use by children at various ages, comprising: a power toothbrush responsive to instructions from an internal or external source to adjust operating characteristics of the toothbrush carried out by a control system, associated with a selected age of a child user; and an entry system for initiating operation of the power toothbrush at a selected level of operating characteristics.

Figure 1A is a simplified drawing of an electric toothbrush illustrating the structure of the present invention.

Figure 1B is a diagram of an example of a user interface portion of an electric toothbrush.

Figure 2 is a diagram of a user interface portion of an electric toothbrush showing various operating modes, including an extended time indicator.

Figures 3A 3C are user interface diagrams showing a system for changing between various modes using a two-button control interface.

Figures 4A and 4B are interface diagrams showing a system for changing between an automatic and a manual extended time capability using the two-button interface of Figures 3A and 3B.

Figures 5A-5D are interface diagrams showing a system for selecting a mode for an extended time.

Figure 6 shows the interface when a typical operation illustrated in Figures 5A-5D has been completed.

Figures 7A-7B are simplified diagrams showing a brushing system for use with children.

Figure 8 is a diagram showing another brushing system for use with children.

Figures 9A-9D are a sequence of diagrams showing the operation of the system of Figure 8.

Figure 10 is a schematic view of a toothbrush with various embodiments for changing operating characteristics of the toothbrush as children get older.

Figure 11 is a schematic view of a toothbrush with a skin member for changing operating characteristics of the toothbrush.

Figures 12-14 are cross-sectional views of the skin member of Figure 11, showing various ways of changing the operating characteristics of the toothbrush or initiating operation thereof. 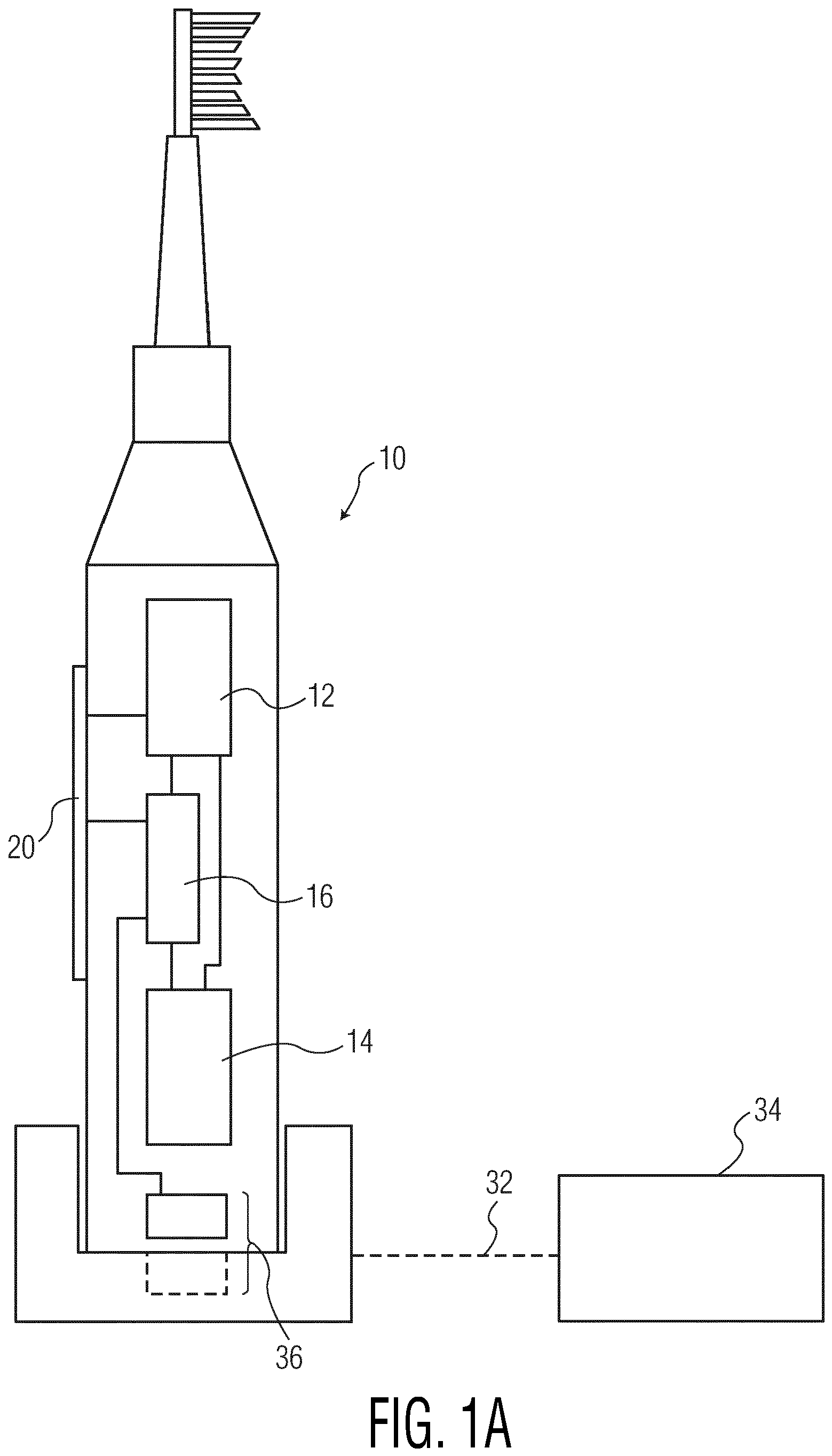 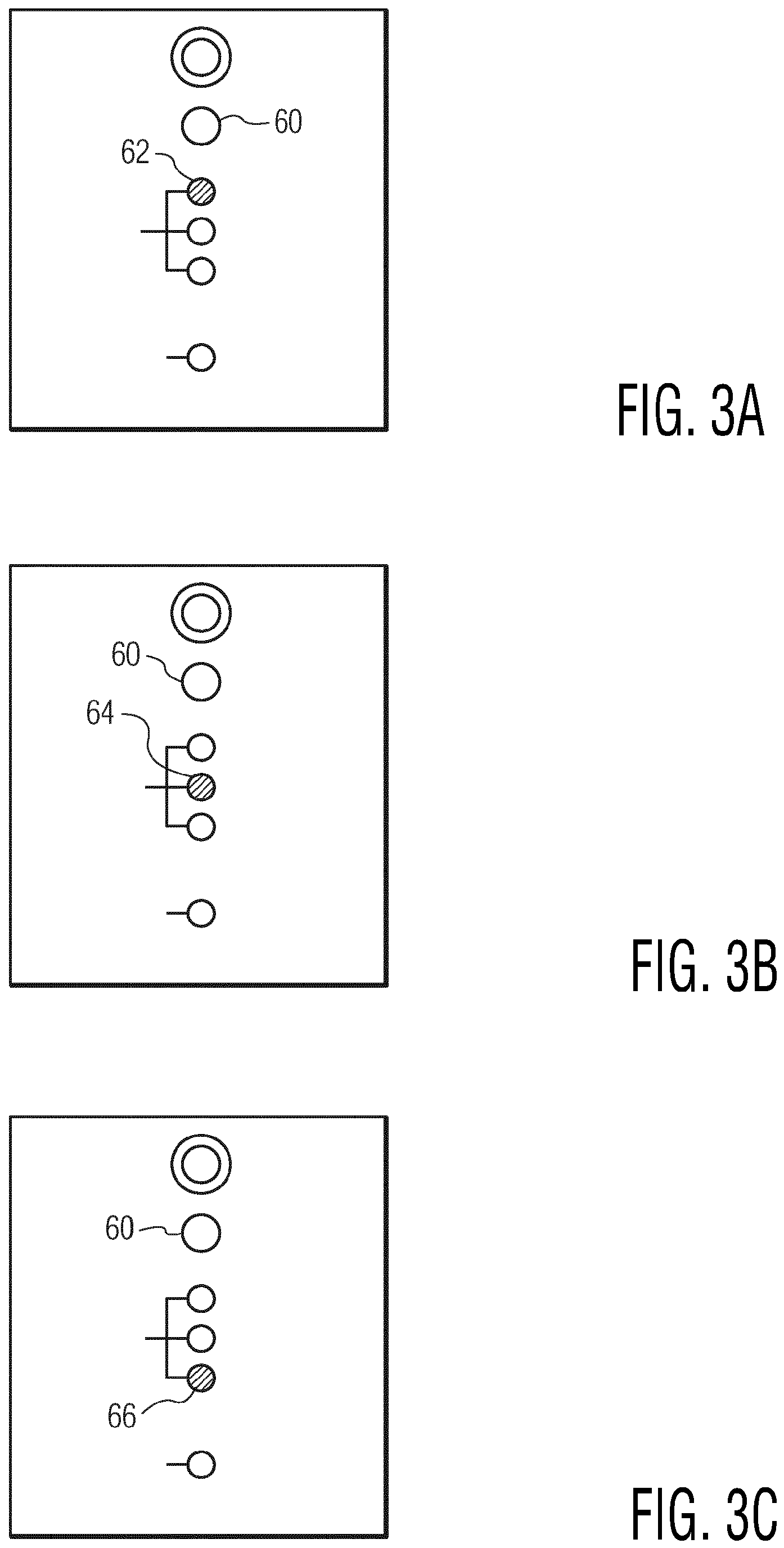 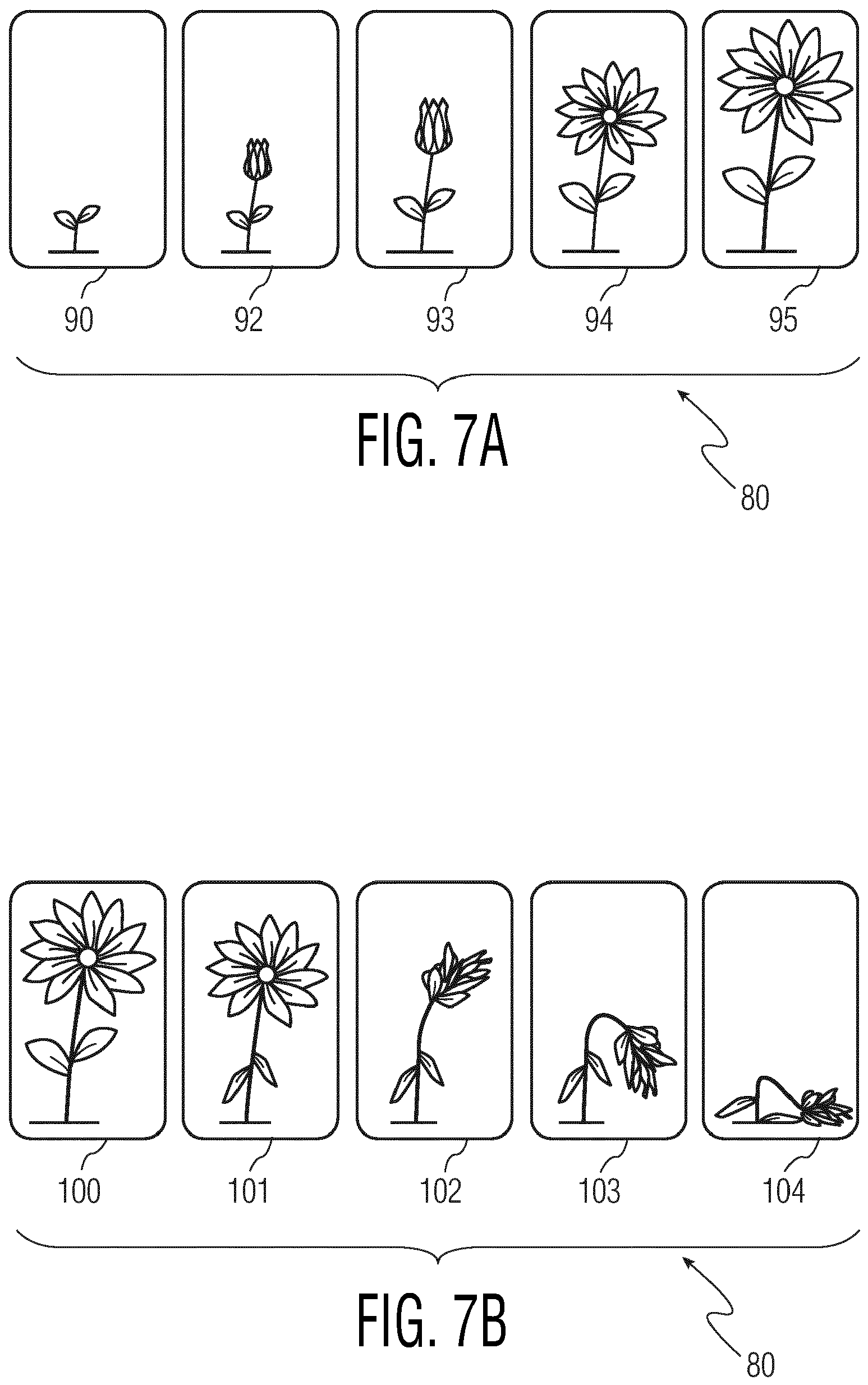 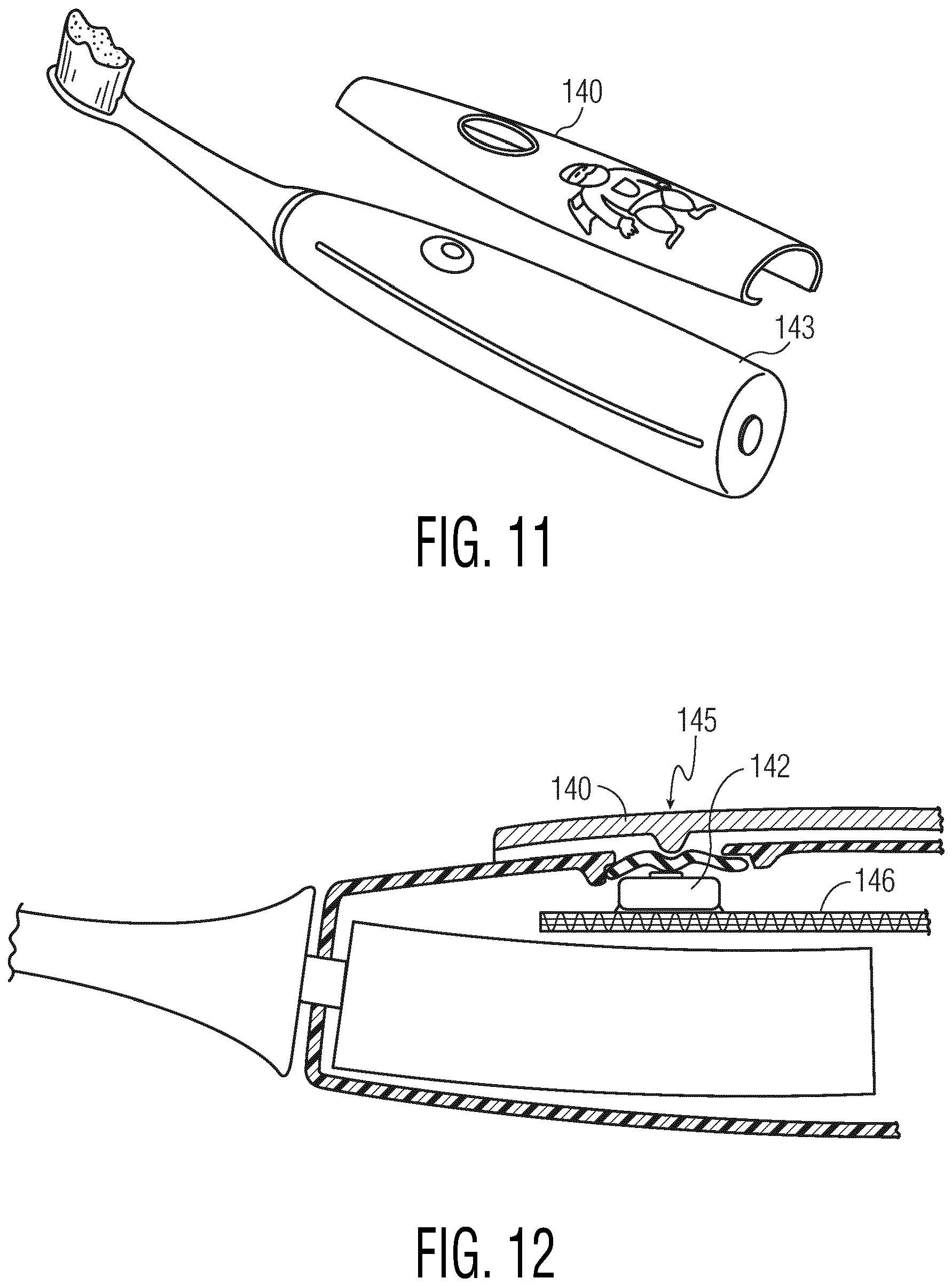 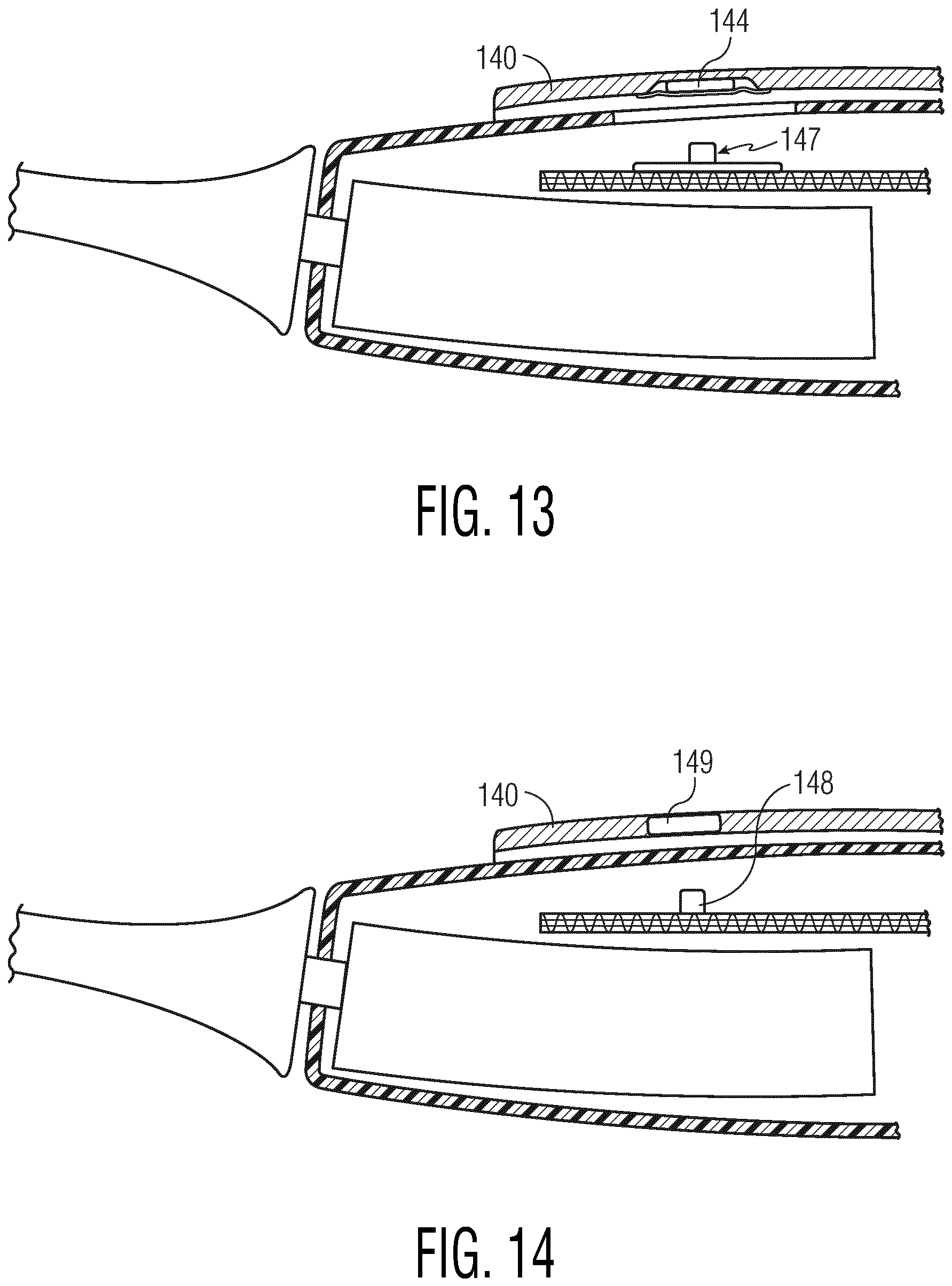 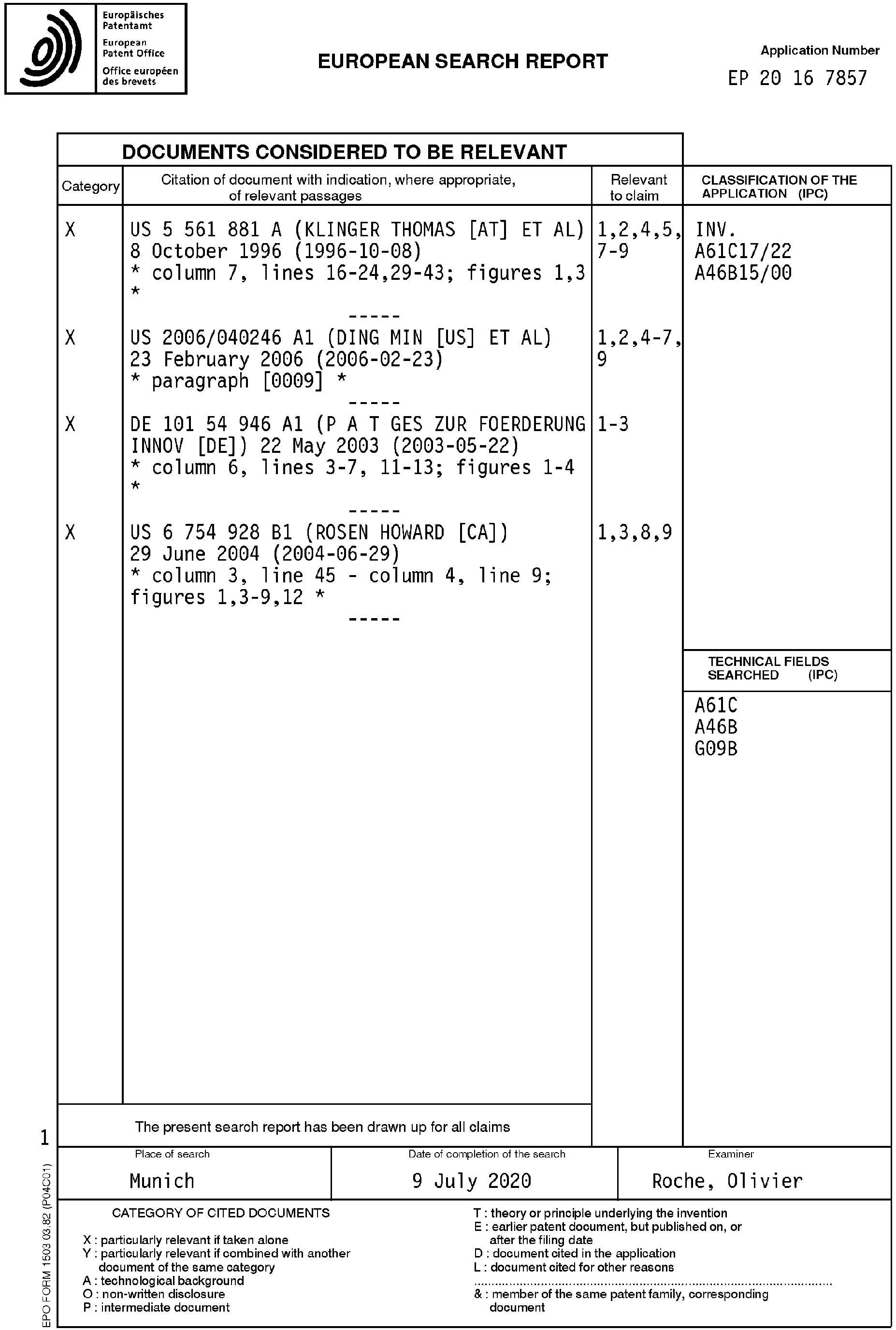 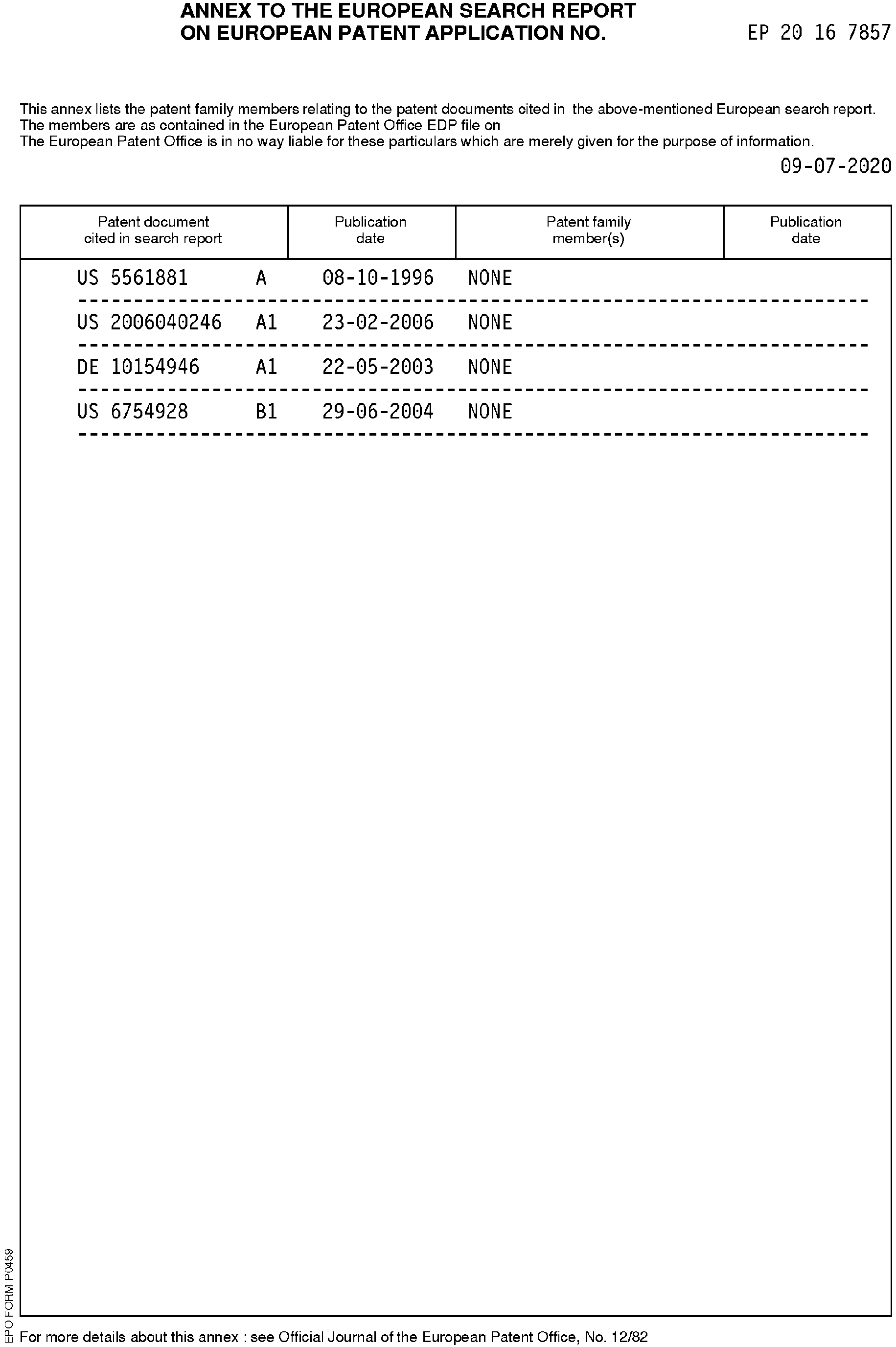