[0001] At least one of the present embodiments generally relates to local illumination compensation for video encoding or decoding that uses multiple linear models.

[0002] To achieve high compression efficiency, image and video coding schemes usually employ prediction and transform to leverage spatial and temporal redundancy in the video content. Generally, intra or inter prediction is used to exploit the intra or inter frame correlation, then the differences between the original block and the predicted block, often denoted as prediction errors or prediction residuals, are transformed, quantized, and entropy coded. To reconstruct the video, the compressed data are decoded by inverse processes corresponding to the entropy coding, quantization, transform, and prediction.

FIG. 1 illustrates an example of video encoder 100, such as a High Efficiency Video Coding (HEVC) encoder.

FIG. 2 illustrates a block diagram of an example of video decoder 200, such as an HEVC decoder.

FIG. 3A illustrates an example of coding tree unit and coding tree in the compressed domain.

FIG. 3B illustrates an example of division of a CTU into coding units, prediction units and transform units.

Fig. 4A illustrates a prediction method in case of bi-prediction comprising a first method for derivation of LIC parameters.

Fig. 4B illustrates a prediction method comprising a second method for derivation of LIC parameters.

FIG. 5 illustrates an example embodiment of a multi model LIC where the models are split by a threshold.

FIG. 8 illustrates a method for derivation of LIC parameters comprising a regularization stage.

FIG. 9B illustrates an example embodiment for determining single model parameters when a discontinuity issue occurs.

FIG. 10 illustrates a block diagram of an example of a system in which various aspects and embodiments are implemented.

cur(r) is a neighboring reconstructed sample in current picture (right side of FIG. 3C),

ref(s) is a reference sample built with MC from reference picture (left side of FIG. 3C), with s=r+mv,

cur(r) and ref(r) are co-located samples in the reconstructed and reference L-shape respectively.

[0036] The value of (a,b) are obtained using a least square minimization (LSM) as formulated in equation 3 as follows:

[0037] Note that the value of N may be furtherly adjusted (reduced incrementally) in order to the sum terms in eq.3 to remain below the maximum integer storage number value allowed (e.g. sum term < 216). Also, the sub-sampling of the top and left samples set can be incremented for large blocks.
[0038] Once the LIC parameters (a, b) are obtained by the encoder or the decoder for the current CU, then the prediction of current CU consists in the following (uni-directional prediction case):

where current_block is the current block to predict, pred(current_block) is the prediction of the current block, and ref_block is the reference block built with regular motion compensation (MC) process that is used for the temporal prediction of the current block.
[0039] Note that the set of neighboring reconstructed and the set of reference samples (see gray samples in FIG. 3C) have the same number and same pattern. In the following, we will denote "left samples" the set of neighboring reconstructed (or the set of reference samples) situated at the left of the current block and denote "top samples" the set of neighboring reconstructed (or the set of reference samples) located at the top of the current block. We will denote "samples set" the combination of "left samples" and "top-samples" sets.
[0040] Fig. 4A illustrates a prediction method in case of bi-prediction comprising a first method for derivation of LIC parameters. In this case, the prediction is based on two references called reference 0 and reference 1 that are combined together. The LIC process is applied twice, first on reference 0 prediction (LIC-0) and second on the reference 1 prediction (LIC_1) (Figure 3). Next, the two predictions are combined together as usual using default weighting (P = (P0 + P1 + 1)>>1) or bi-prediction weighted averaged (BPWA): P = (g0.P0 + g1.P1 + (1<<(s-1)))>>s). This method is named method-a.
[0041] Fig. 4B illustrates a prediction method comprising a second method for derivation of LIC parameters. In this variant named method-b, the regular predictions are first combined in step 360. Then, a single LIC process is applied, in step 330 and the prediction is computed in step 340 according to the determined LIC parameters.
[0042] Another method of parameters estimation for intra-prediction is named Cross-Component Linear Model (CCLM). the chroma samples block prediction (Ycorr) can be built from the (down-scaled) reconstructed luma samples block (Ypred) corrected with a linear model. In this case, the same model as Equation 1 is used with:

Ycorr(x) is the prediction of the chroma sample value situated at position x.

[0044] FIG. 5 illustrates an example embodiment of a multi model LIC where the models are split by a threshold. This embodiment uses two linear models (a0,b0) and (a1,b1) and a threshold regarding reconstructed luma samples values to determine which model to use. The threshold value is for example determined as the average of the reconstructed luma sample values.
[0045] FIG. 6 illustrates an example embodiment for splitting the two LIC models. In such embodiment, two linear models are using distinct LIC parameters ((a0,b0) and (a1,b1)), for example determined using equation 3 or using other methods. A first model and first LIC parameters are used for a first subset of the samples and a second model and second LIC parameters are used for the second subset of the samples. In the following, this mode is named multi model LIC (MM-LIC).
[0046] The split between the two sets is done regarding a threshold value. In FIG. 6, NM0 and NM1 respectively denote the number of reconstructed neighboring samples with value respectively inferior and superior to the threshold.
[0047] Determining the threshold value splitting the two models can be performed according to various embodiments.
[0048] In at least one embodiment, the threshold value splitting the two models is for example determined as the average of the reconstructed samples ("cur(s)").
[0049] In at least one embodiment, the threshold value is determined so that so that the number of samples used in each model (NM0 and NM1) is substantially the same. This increases the validity of the LIC models. Indeed, when the number of samples of one of the model is too small (NM0 much greater than NM1 or NM0 much smaller NM1), the validity of the corresponding LIC model (NM1 or NM0 respectively) is uncertain and the LIC parameters derived using equation 3 could be unreliable since based on too few samples. This can be done using a histogram as shown in FIG.6 and counting the number of samples. In a variant, this embodiment should be used only if the size of the histogram (2bit-depth - s) is smaller than N= NM0 + NM1.
[0050] In an alternative embodiment, when the number of samples of the models is not well balanced, a single LIC model is used. This can be determined by dividing the number of samples of the model that has the highest number of samples by the number of samples of the other model. If the ratio is greater than a threshold, then the model is considered as not well balanced and, in this case, a single linear model is used. An example of threshold value is 10. In another example, this can be determined if one number of samples is inferior to a predetermined value (e.g. NMi=4 samples).
[0051] In at least one embodiment, memory savings are achieved by using a histogram buffer size smaller than the reconstructed samples range value (e.g. 0...2bit-depth). This is done by using an appropriate scaling factor "s" that corresponds to right shifting of the sample values for instance. In that case, the histogram buffer size is reduced to 2bit-depth-s and the histogram step size is 2s and thus, saving memory.
[0052] In a variant embodiment, the lowest and highest values of the histogram are saturated. This is illustrated by the values Min range and Max range in FIG. 6. All sample values smaller than Min range are set to Min range and all sample values higher than Max range are set to Max range. When knowing the potential range of the threshold, only a rough distribution is needed around the probable threshold value, allowing to save some memory. For instance, an estimation of the samples values ranges may be inferred from previously coded samples, in the same or previously coded pictures, or the range values may be encoded in the bit-stream.
[0053] In at least an embodiment, a single pass on the data is performed by aggregating partial sums on the histogram:

are computed with the same intervals of values as the histogram. Once values such as

are computed and the threshold is chosen, partial sums are accumulated with histogram values, so that there is no need to loop again on ref and cur values. This corresponds to an approximation of the sum of absolute difference as:

where ncur(h) is the number of reconstructed cur samples with value ∈[h.2s;(h+1).2s[ and H={h0,h1...} is the number of histogram values. The same approximation can be applied to the reference samples. This single pass is particularly interesting when the LIC parameters a and b are not obtaining using a least square minimization (LSM) as formulated in equation 3 but by using sums of absolute differences (SAD) as formulated in equation 6:

1. A method for decoding picture data for at least one block in a picture comprising

- splitting the set of reconstructed samples into two sets,

- determining (335) whether local illumination compensation should be used with a single linear model or with two linear models according to the set of samples and the determined parameters.

2. A method for encoding picture data for at least one block in a picture comprising

- splitting the set of reconstructed samples into two sets,

- split the set of reconstructed samples into two sets,

- determine (335) whether local illumination compensation should be used with a single linear model or with two linear models according to the set of samples and the determined parameters.

9. An apparatus, comprising a video encoder for encoding picture data for at least one block in a picture, the video encoder being configured to:

- split the set of reconstructed samples into two sets, 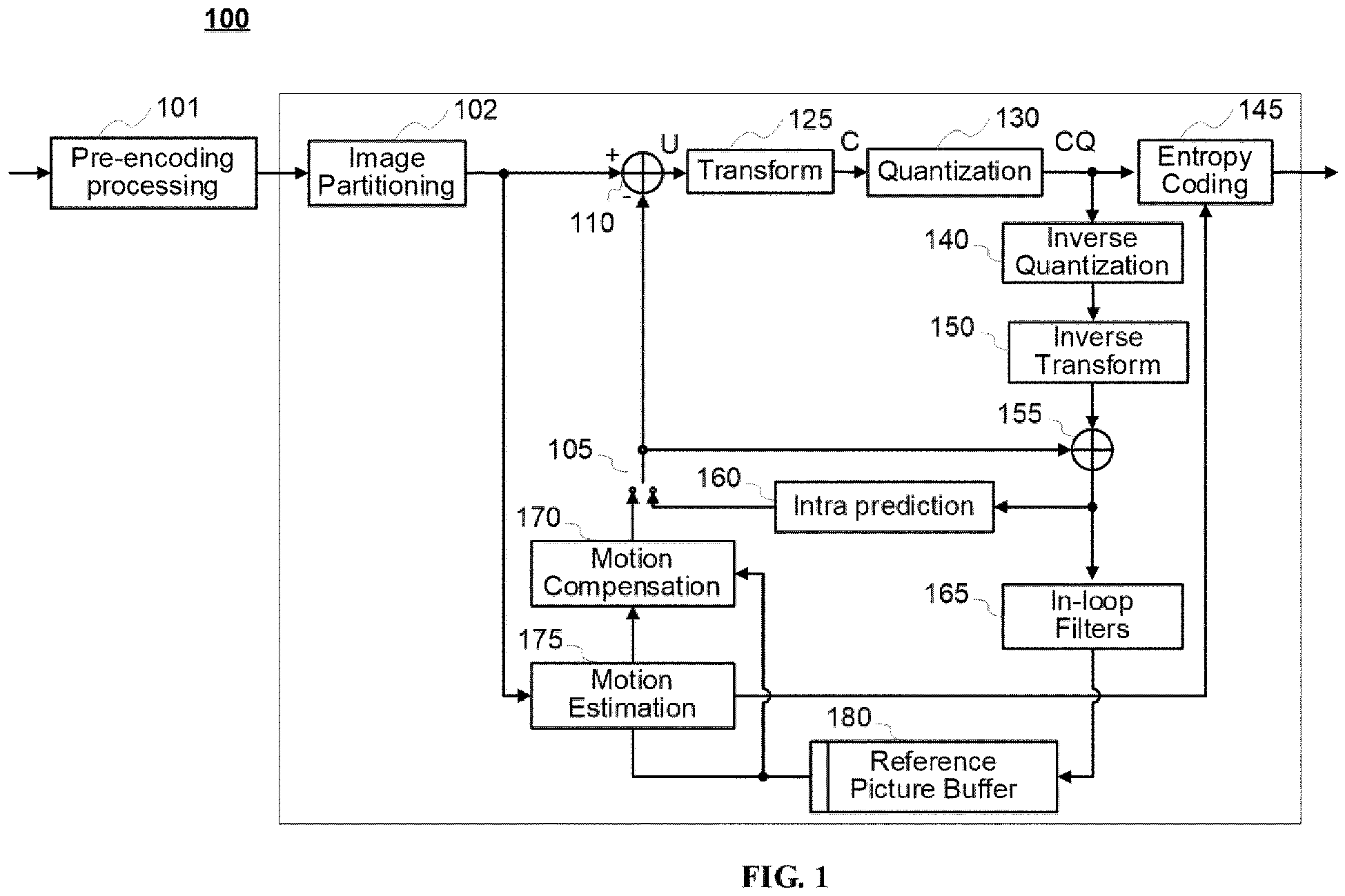 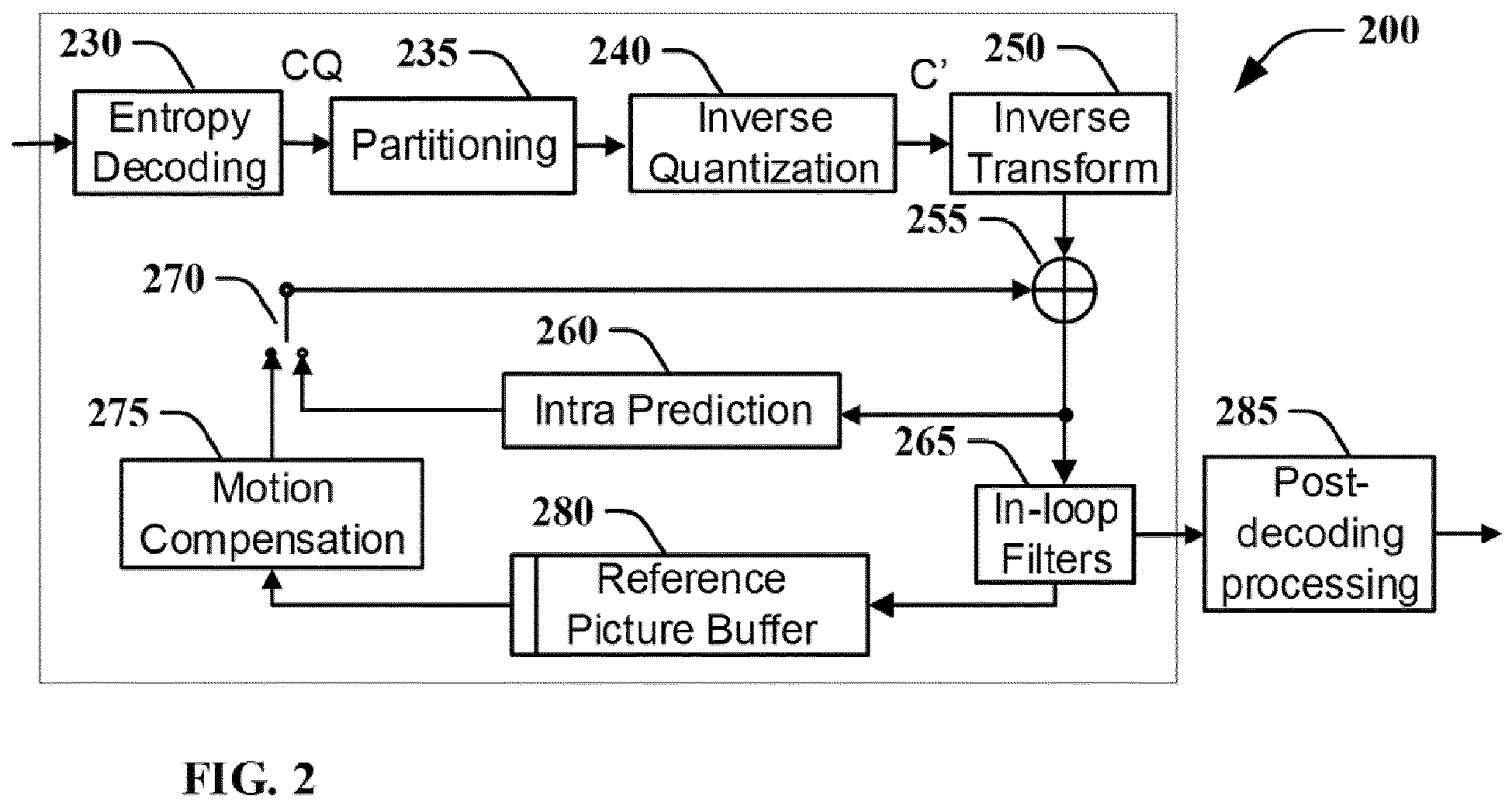 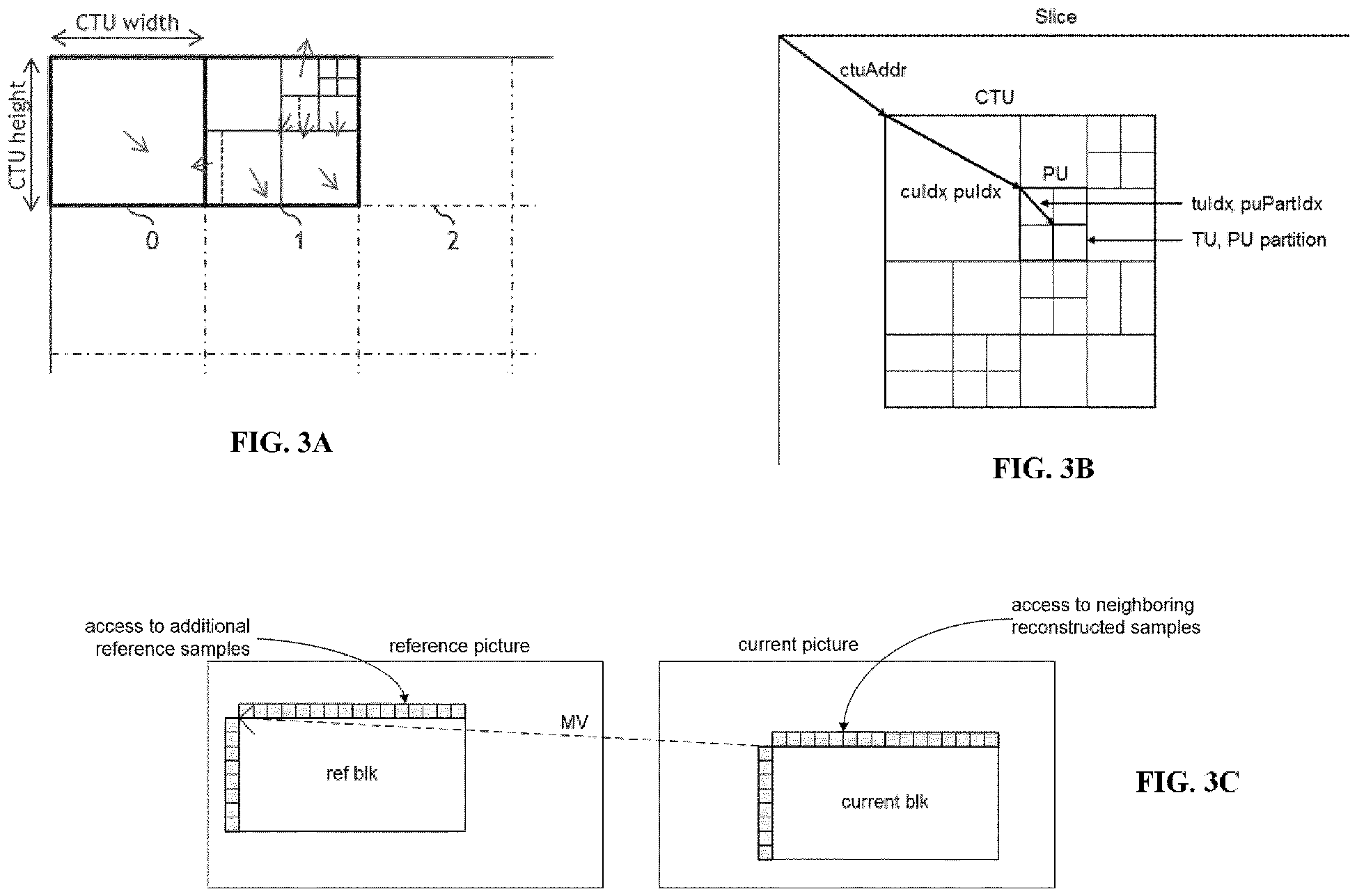 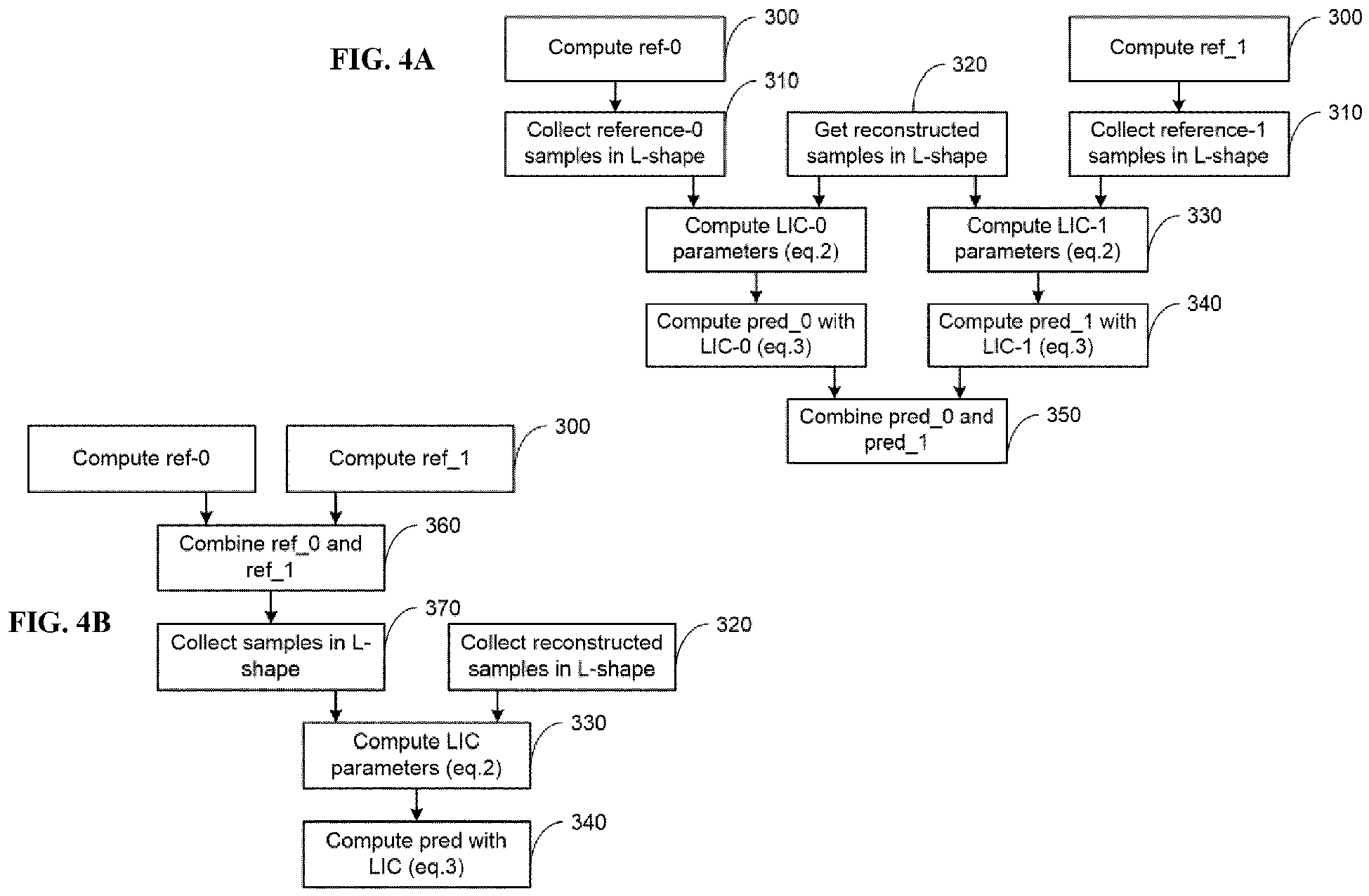 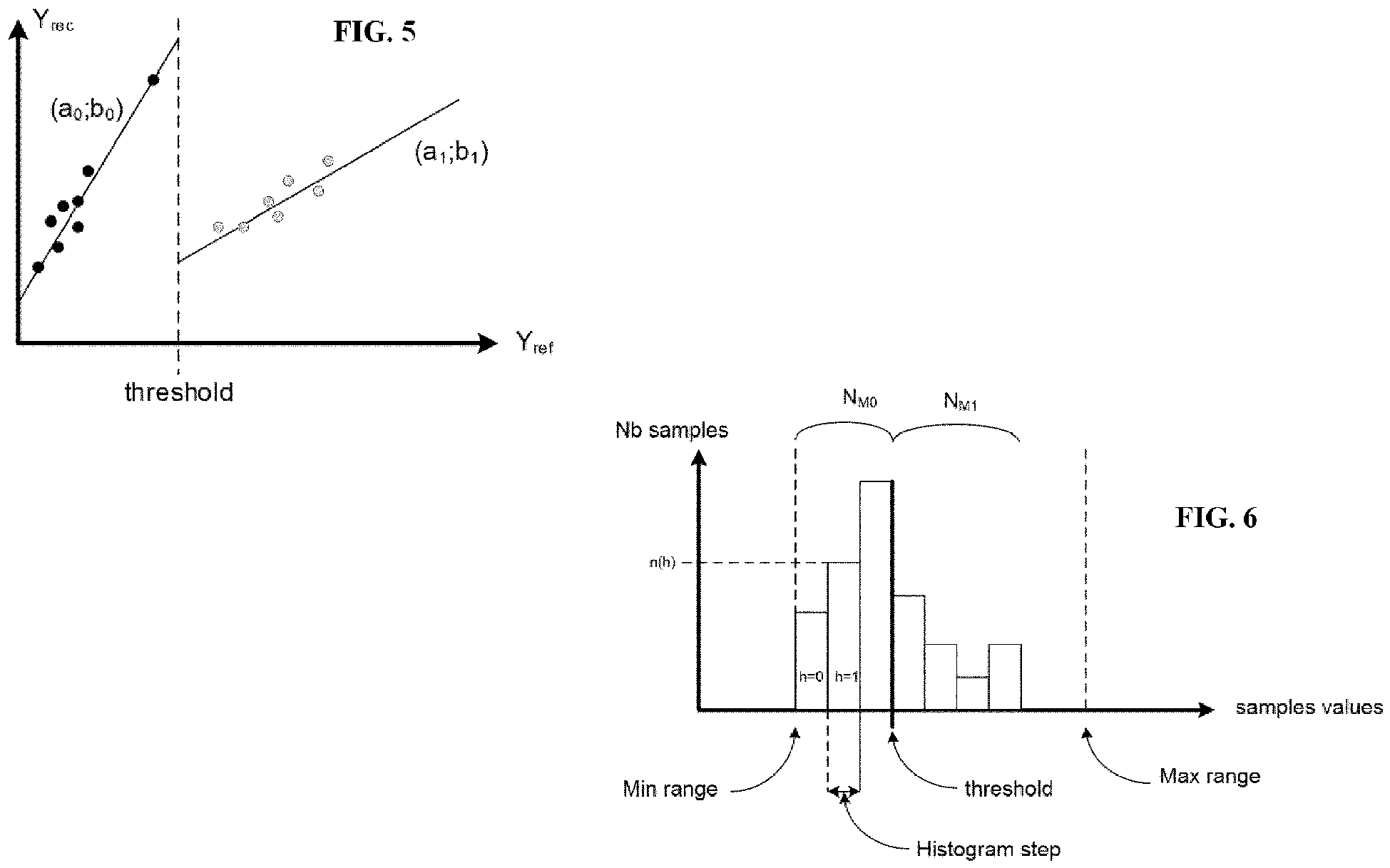 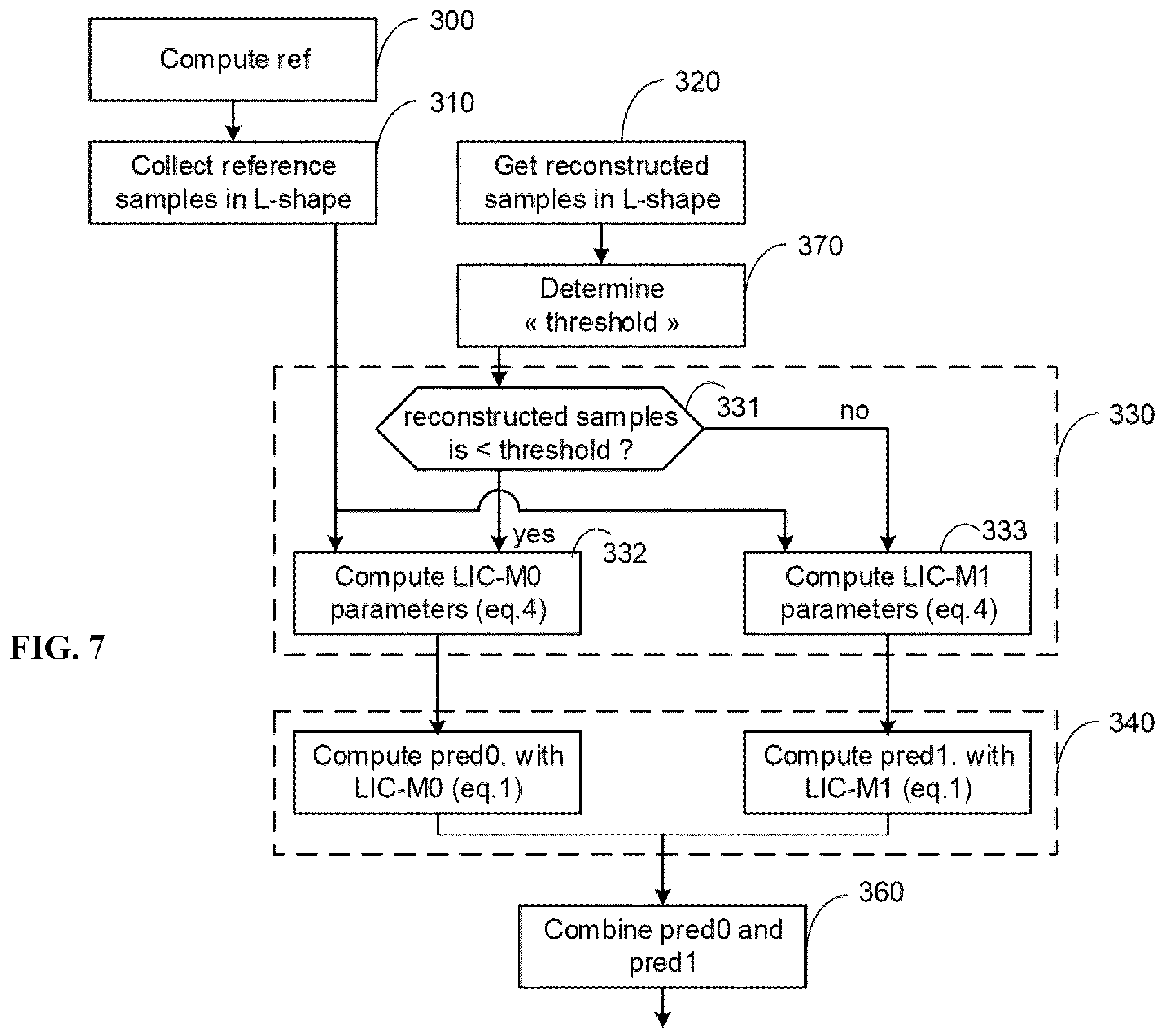 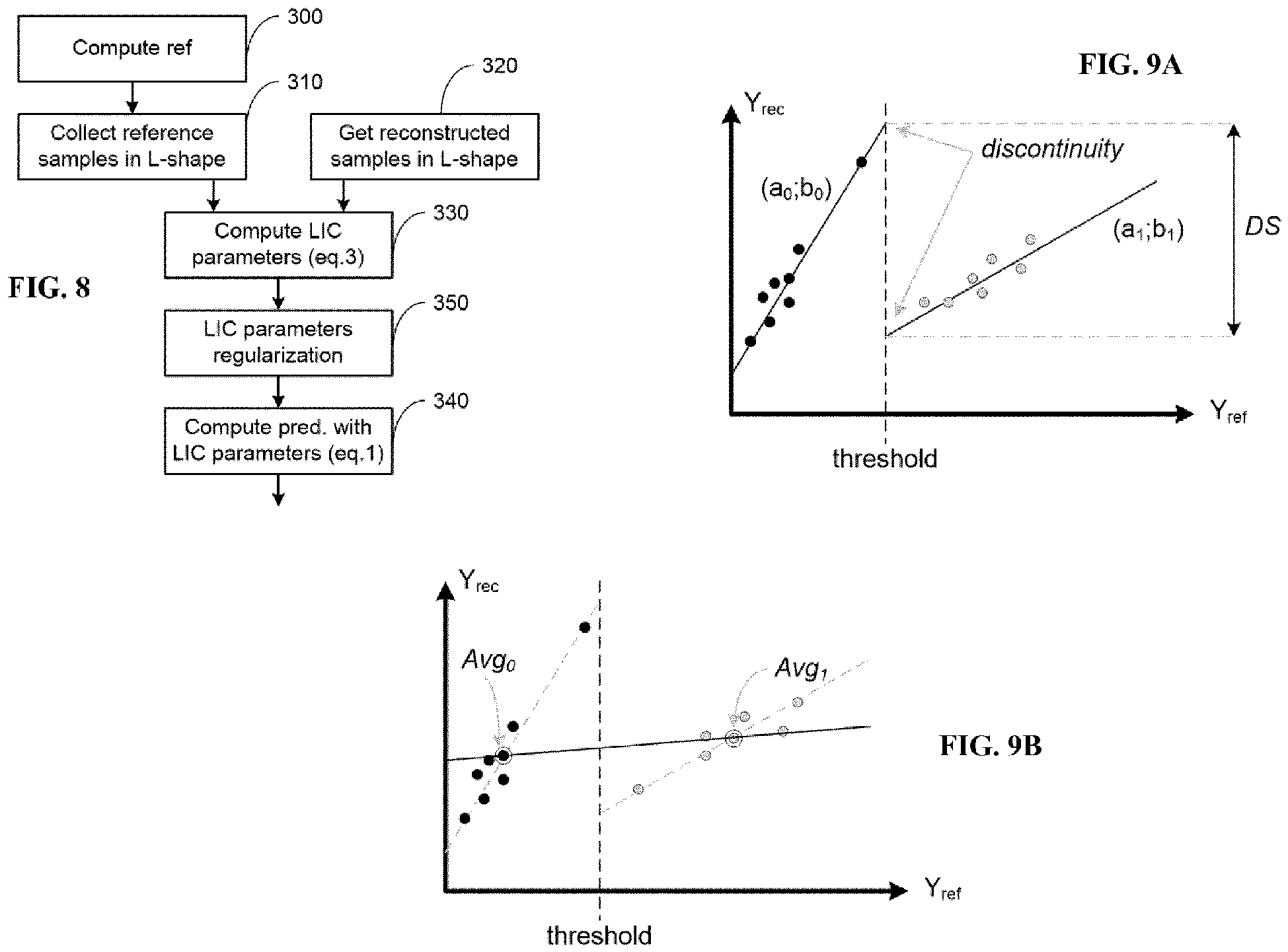 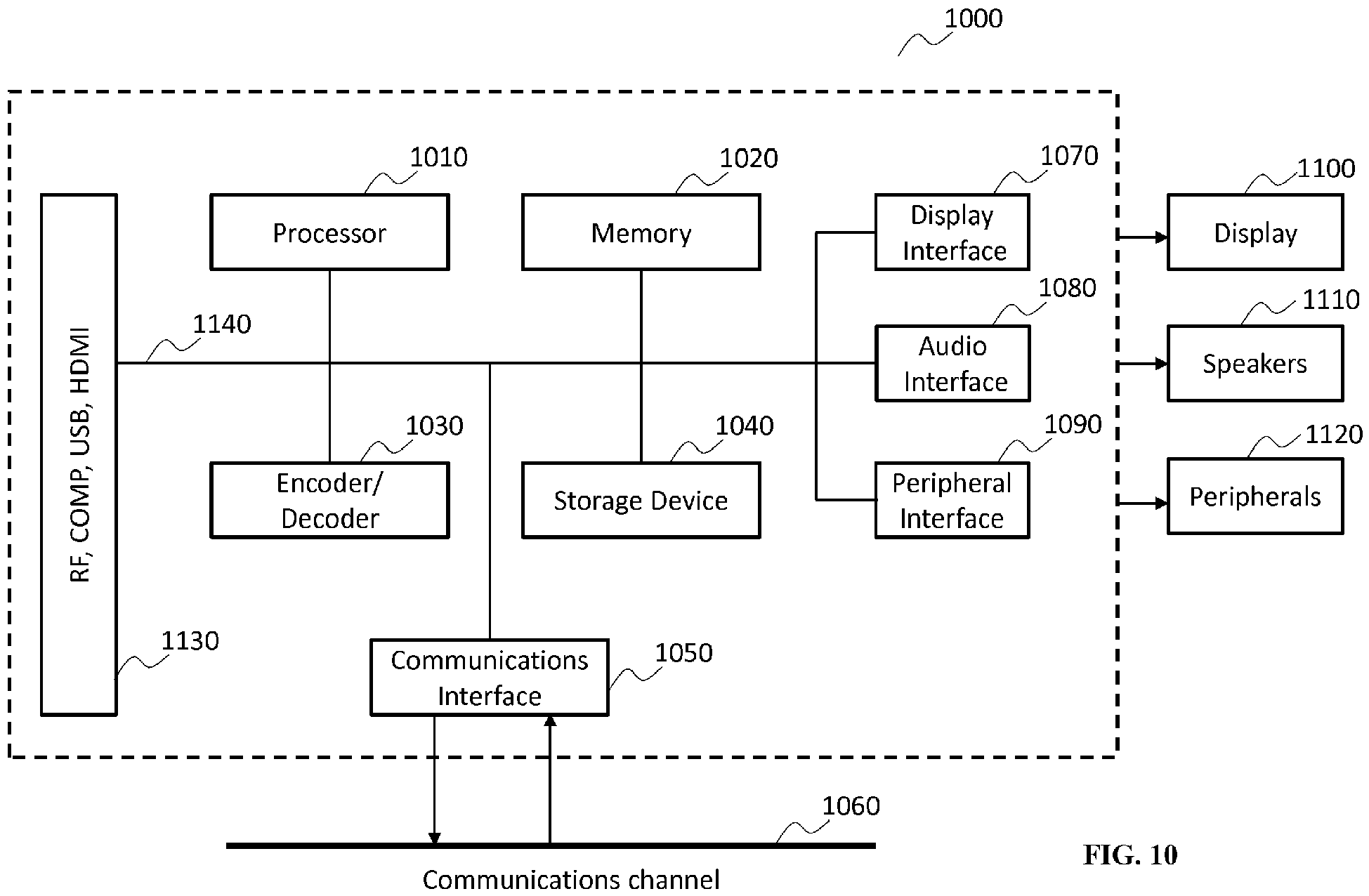 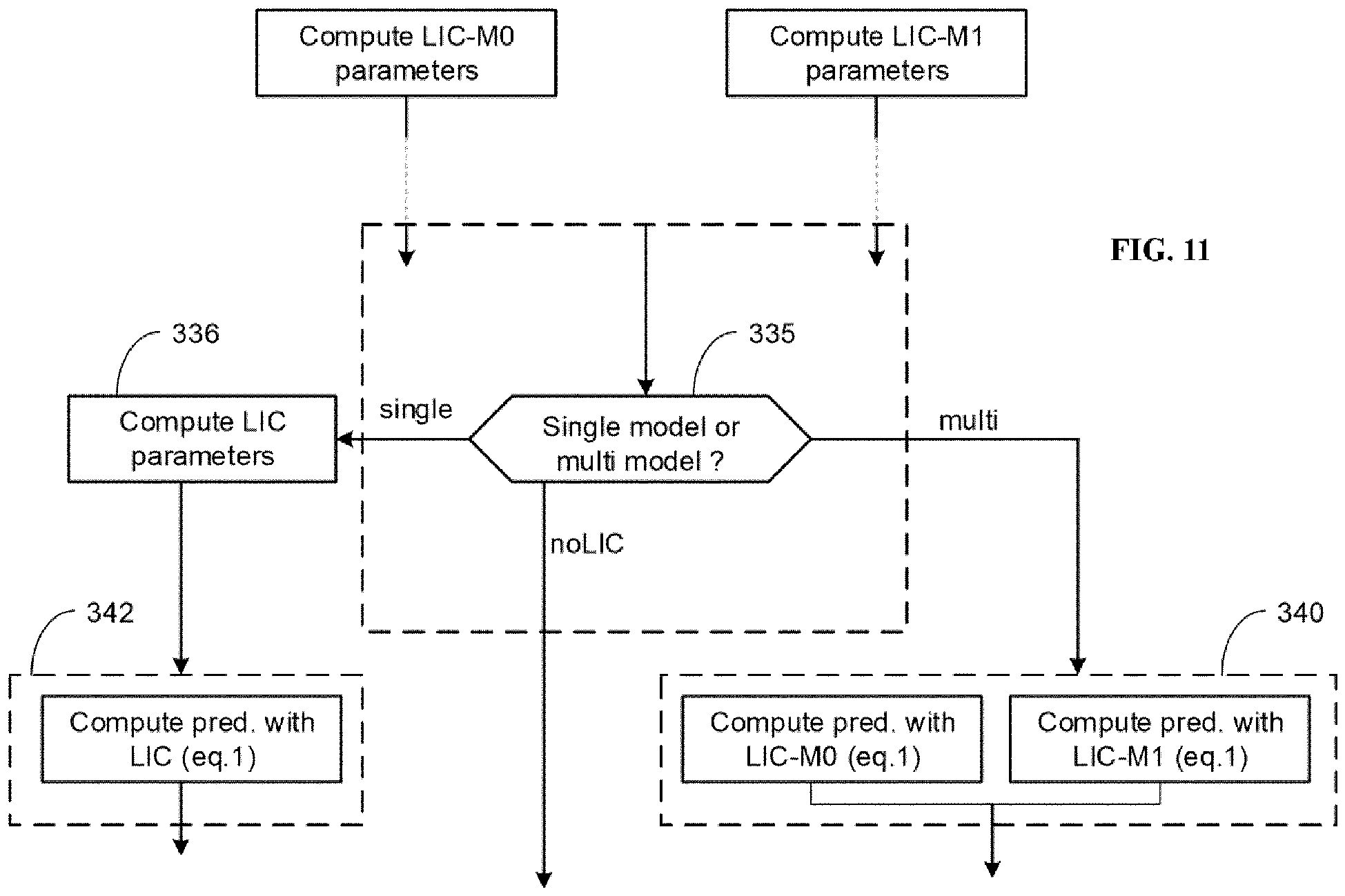 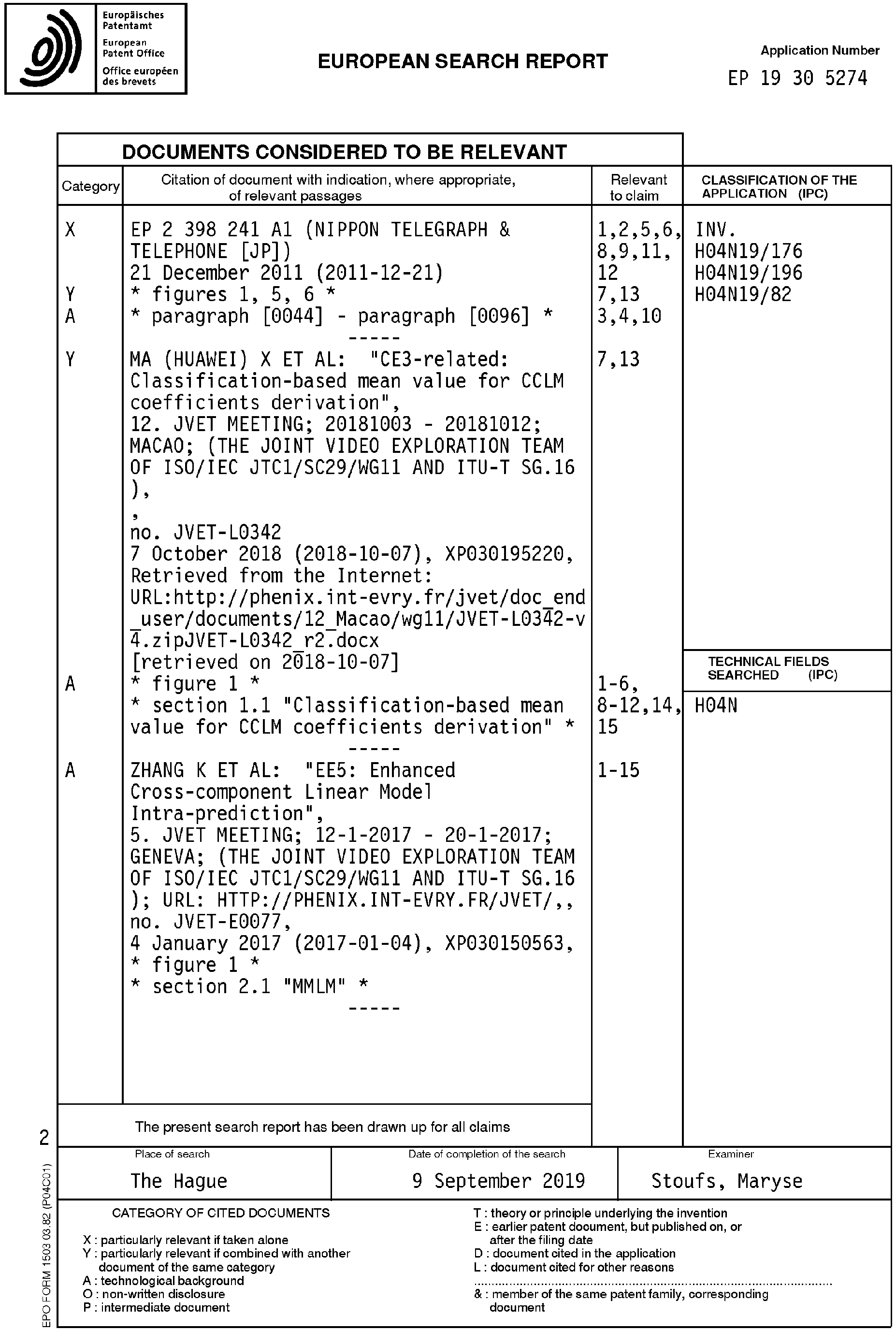 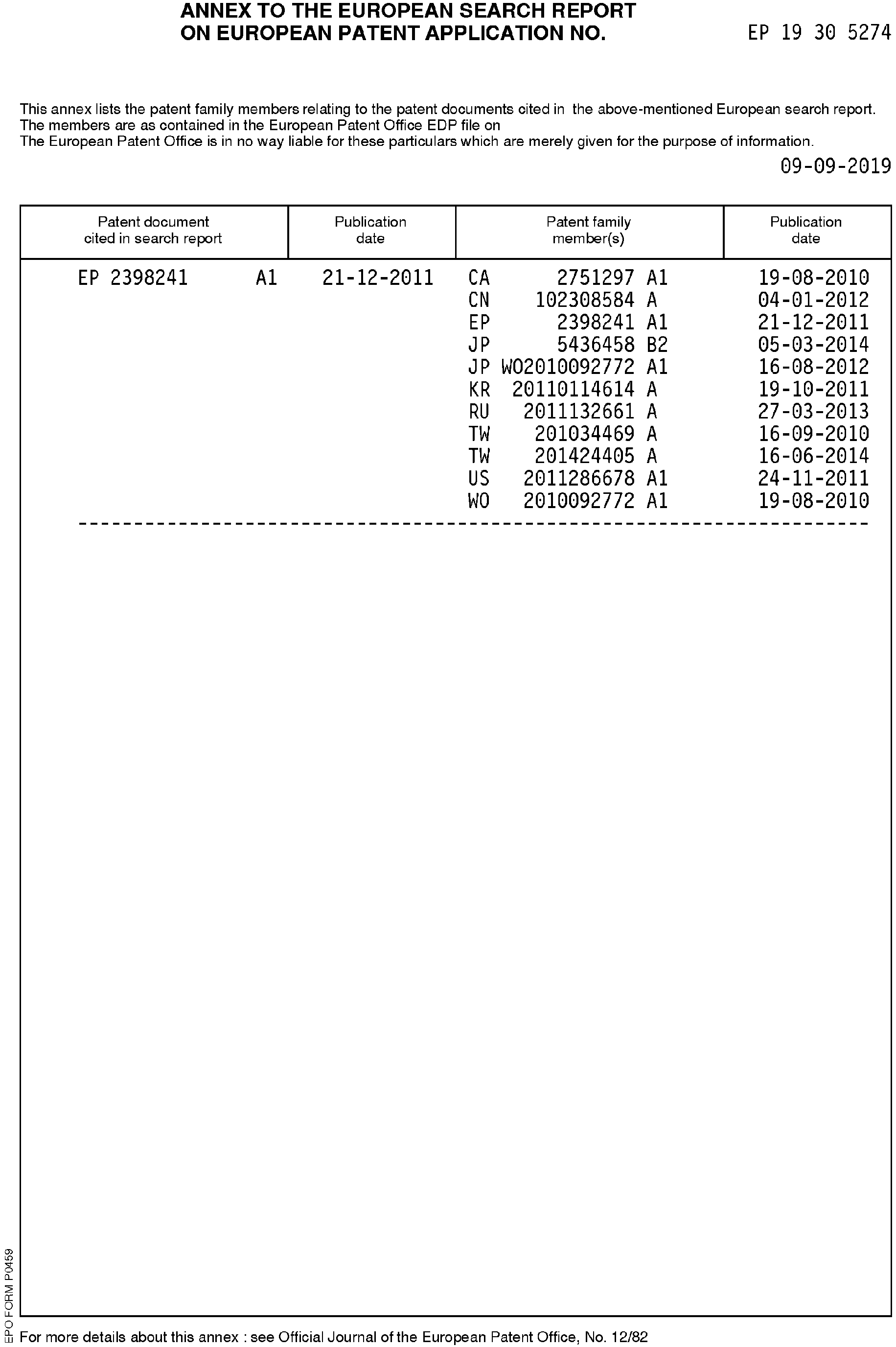