[0001] The present invention relates to a safety scalpel.

[0002] US2011/0098734 A1 discloses a retractable safety knife having a hollow handle with an opening at one end thereof, a pusher that is movably disposed within the handle and is operable by a user, and a blade connected to the end of the pusher. When the pusher moves from a blade-retracted position to a blade-extended position, the blade extends outwardly from the handle opening. The handle has a longitudinal slot where a button protrudes from the slot, the button being provided at least with a downward projection. The longitudinal slot has at least two lateral notches corresponding to the retracted and, respectively, extended position of the blade. The button latches into one or the other position depending on the desired position. US2011/0098734 A1 shows that knives with a movable blade are known with respect to the handle with the use of a single hand; its mobility allows the protection of the blade when it is not used. Only one blade can be chosen at a time.
[0003] US8303614 B2 discloses a lancet device, including an elongate central body having hollow ends; in each of them a needle holding element protected by a cap is pressed. US8303614 B2 proves that a device with two needles individually protected with a cap is known. The cap must be applied by using both hands.
[0004] US6015419 discloses a surgical instrument comprising a hollow handle, retraction means for securably moving a scalpel blade between an extended, in-use position and a retracted, non-use position, and locking means for locking the retraction means in one of the two positions.
[0005] US3688407 discloses a tool holder having a handle with a recess at one or both ends thereof, a wedge means which fits in the recess, a blade which is held between the recess and the wedge means, and a locking rod connected at one end to the wedge means and engaging a locking nut on its opposite end whereby the wedge means may be tightened in the recess to securely hold the blade.
[0006] WO1996027336A1 discloses a scalpel handle which houses a retractable blade support adapted for engaging scalpel blades. The scalpel blade is extended and retracted by the surgeon's index finger as a natural part of the motion of receiving and handing off the scalpel handle, which features few moving parts to thereby provide ease of disassembly and sterilization. WO2016197001A1 discloses a retractable knife including a blade that is mounted on a blade mounting element, where the blade mounting element is located within and is slidably engaged with a handle. The blade is moved from a retracted to an exposed position upon pushing a button of the blade mounting element, which results in a cantilever arm bending downwards into an open space, and then pushing the element forward to move the blade outside of the protection afforded by the handle.
[0007] US5620455 discloses a multi-function instrument for pedicure operations and manicure operations, which comprises a body having a grip region and a coupling region for one main blade-like tool. The instrument comprises one cap for covering the main tool connected to one secondary tool.
[0008] Each of the above cited retractable blade systems has only one retractable surgical scalpel thanks to a prismatic guide located inside a protection member.

wherein the elongated central body comprises a retractable lancet system connected at each of its opposite ends,

[0014] Such a scalpel allows the surgeon to use either of the lancets in the same surgery, without any risk of injury in the passage of the scalpel between the surgeon and the scrub nurse, or while a lancet is being covered.
[0015] As the scalpel has two lancets being alternately used, its passage from the surgeon to the scrub nurse takes place only once rather than twice, as happens when using a scalpel having only one lancet.
[0016] The opening and closing of the protection member can be performed by using one hand.
[0017] Advantageously, the lancets may be different from one another in order to perform different functions.
[0018] Conveniently, the protection members are rotated 180 degrees with respect to each other around the axis of the elongated central body, so as to allow the change of lancet with its simple rotation, after the closure of the first protection member and after the opening of the second one.
[0019] Suitably, the protection members are shaped flared towards their front opening in an ergonomic form for gripping.
[0020] The opposed closed end of the protection members is connected to the elongated central body by a bayonet coupling, but, alternatively, another connecting means may be employed, for example screw or interlocking.
[0021] The accuracy and stability of the stop recesses is guaranteed by the elastic behavior of the arm carrying on the button of the lancet holding member.

[0022] Further features and advantages of the present invention will become most clear from the indicative, and therefore non-limiting, description of a preferred but not exclusive embodiment of a safety scalpel, as illustrated in the accompanying drawings in which:

1. A safety scalpel comprising an elongated central body (1) having opposite ends (2, 3) for respective lancets (24),

wherein the elongated central body (1) comprises a retractable lancet system connected at each of its opposite ends (2, 3),

- a prismatic guide concentric to the elongated central body (1) that is located inside the protection member (4); and

- a lancet holding member (20) consisting of:

a distal part (21) in the form of a prismatic member in which the lancet (24) is frontally inserted, and

a proximal part (22) formed by two parallel arms (25, 26) having an end integral with the prismatic member, a first arm (25) of them being slidable in contact with the prismatic guide and a second arm (26) carrying on a button (27) protruding from the slot (12) of the protection member (4) and being provided with retaining elements (28) intended to be received into the stop recesses (10, 11) of the slot (12). 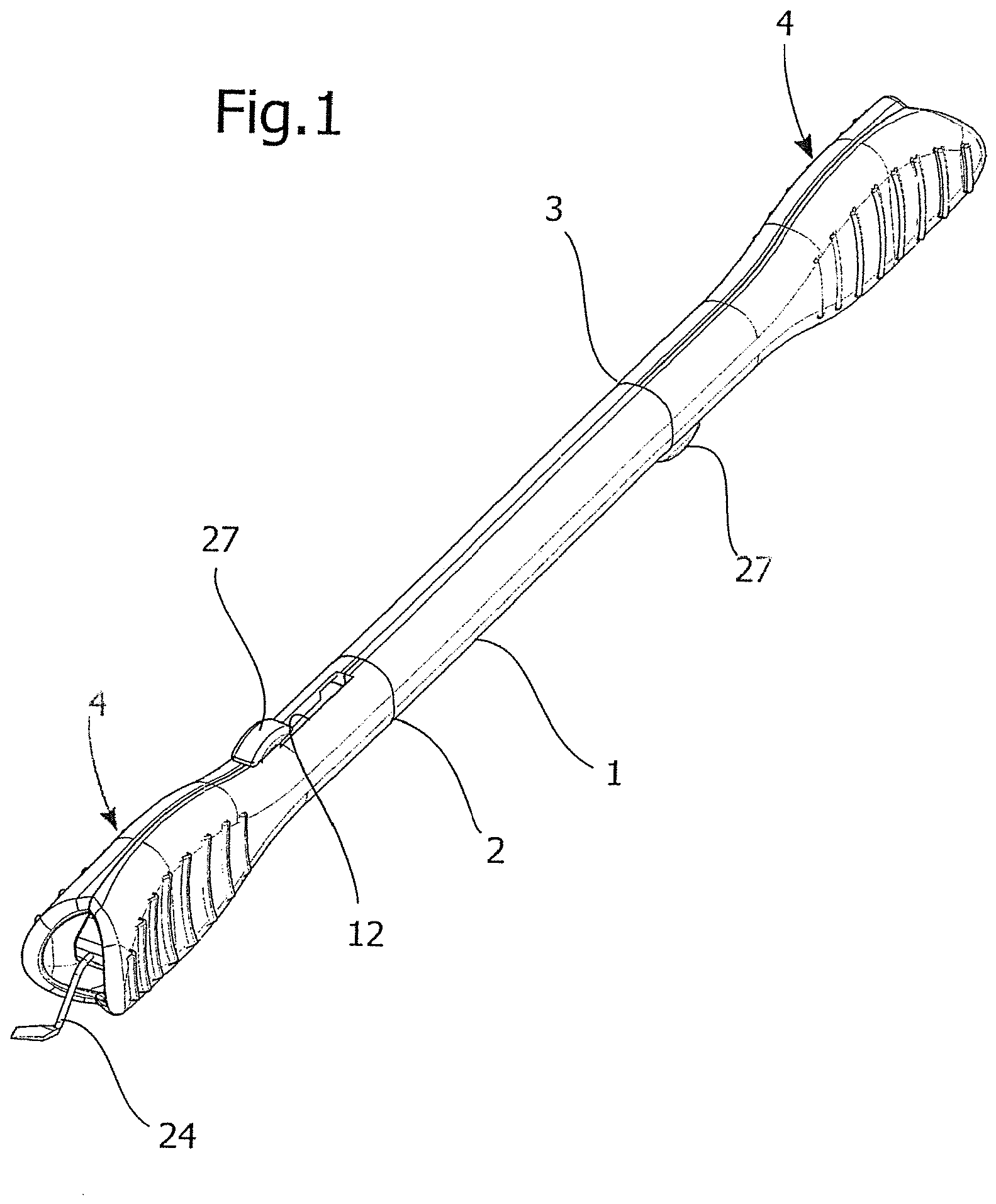 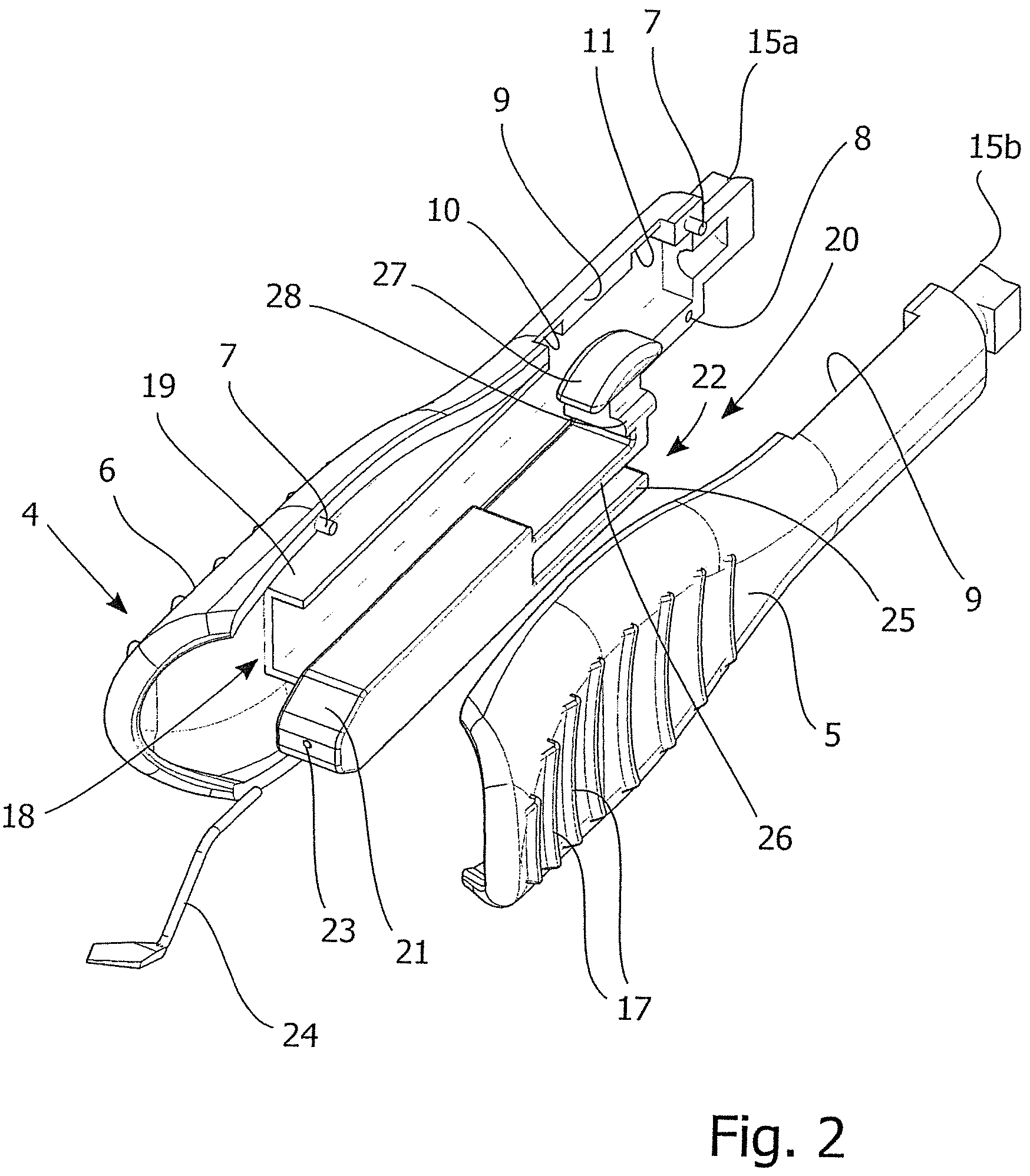 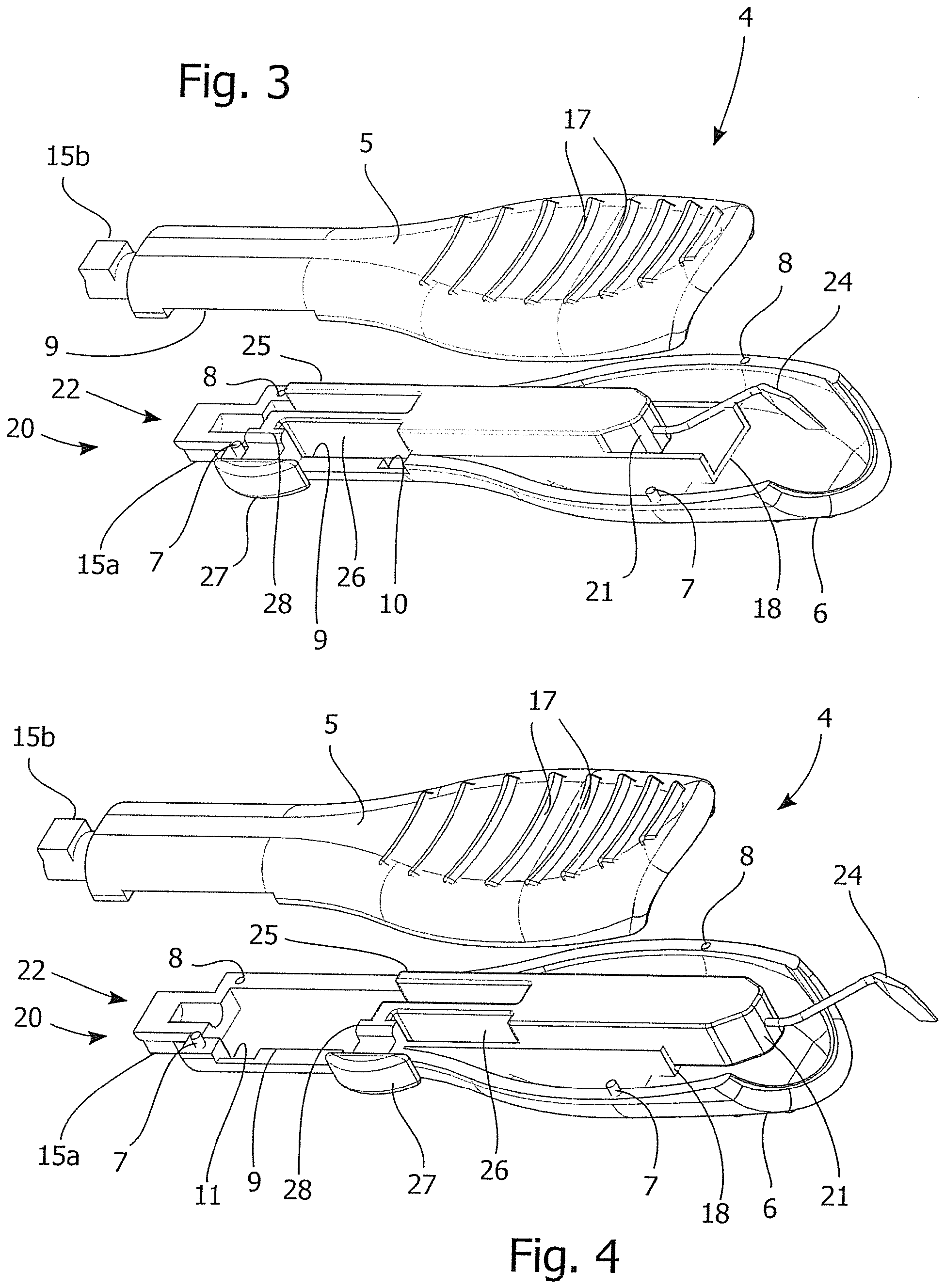 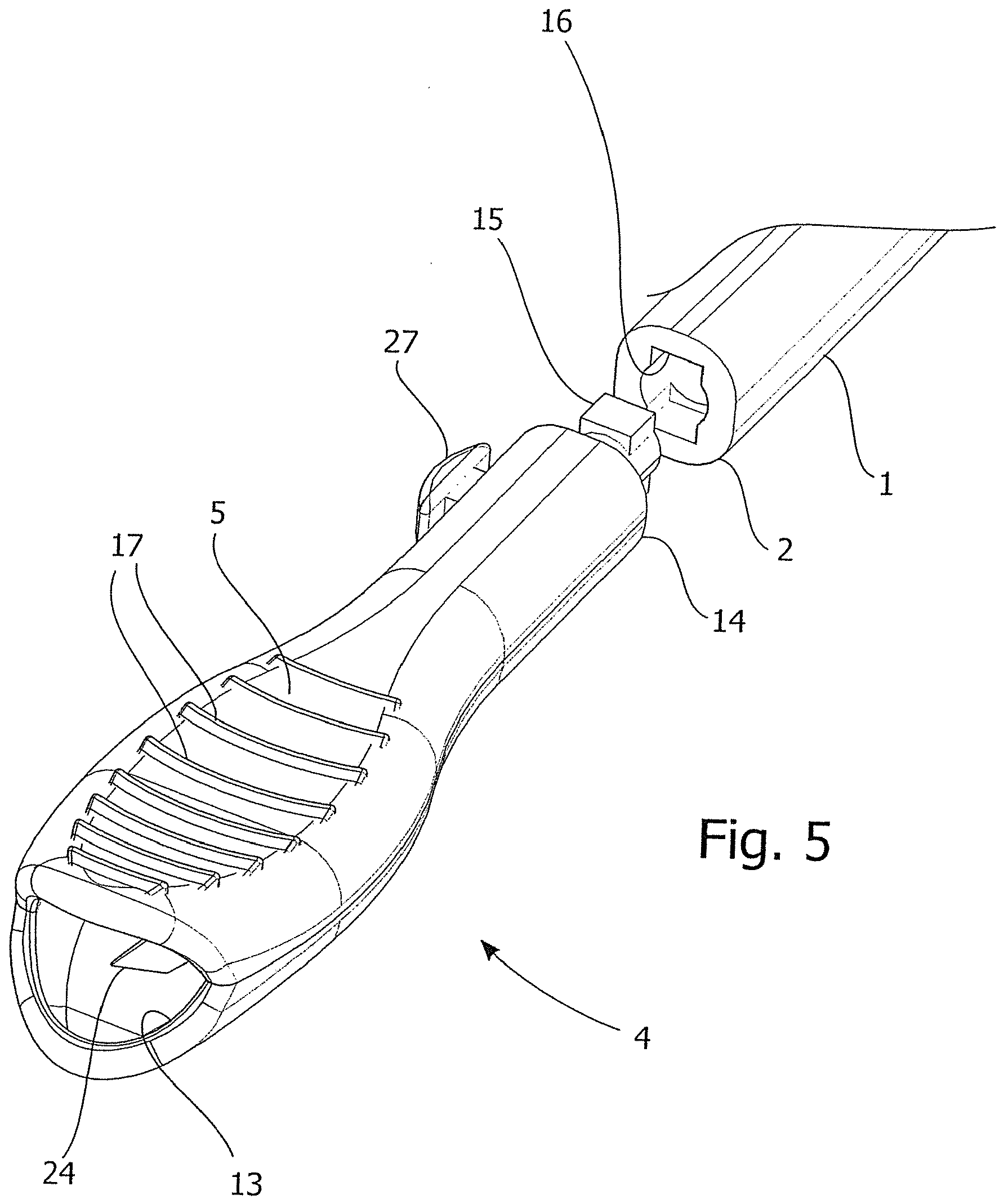