[0001] The present invention relates to a therapeutic product delivery device.

[0002] Conventionally, Type 1 diabetes has been treated with daily insulin injections. However, this inevitably results in insulin levels that do not match the normal and rapid changes in blood glucose which occur in a patient throughout the day. On the one hand, insufficient insulin and high glucose levels lead to immediate symptoms and contribute to long-term complications. On the other hand, too much insulin may result in too little blood sugar leading to loss of consciousness and convulsions. As an alternative to injections, insulin pump therapy is intended to mimic the normal physiology of the healthy pancreas. Unlike multiple daily insulin injections, an insulin pump is able to provide a constant background infusion of insulin that can be adjusted according to individual need, compensating for daily activity and exercise routines. The pump may also be programmed to deliver bolus doses of insulin to address the big glucose swings in the blood that would otherwise result from eating and drinking. By mimicking the natural physiology of the pancreas, insulin pump therapy aims to maintain a constantly normal blood glucose level; avoiding the highs that are associated with meals or the lows that come from too much insulin.
[0003] It is important for the patient to know that the insulin pump is successfully delivering insulin to his or her body. It is therefore important for the patient to be made aware when a blockage is preventing this.

[0004] According to an aspect of the present invention, there is provided a therapeutic product delivery device, comprising:

an occlusion detection layer; and

a valve layer, through which a therapeutic product is conveyed by the action of the actuator;

wherein the occlusion detection layer comprises a plurality of contacts, each electrically connected to a respective one of the conductive pins, the contacts being provided at a detection region at which the therapeutic product is deposited in the event of a blockage;

[0013] The invention will now be described by way of example with reference to the following Figures in which:

Figure 1 shows a schematic view of a drug delivery system;

Figure 2 shows a schematic view of a drug delivery device;

Figure 3 shows a schematic view of a handset for controlling the drug delivery device of Figure 2;

Figures 4A and 4B schematically illustrate exploded view of an insulin cartridge as a whole and an actuator assembly;

Figures 6A to 6F schematically illustrate the pumping operation of the insulin cartridge;

Figures 7A to 7C schematically illustrates the structure and operation of the one way valves used in the insulin cartridge; and

Figures 8A and 8B schematically illustrate an occlusion layer in electrical and structural connection with a PCB via conductive pins.

[0019] The handset 3 comprises two transceivers. The first transceiver is for communicating with the delivery device via the first wireless connection 5, while the second transceiver is for communicating with the server 4 via the second wireless connection 6. The handset also comprises a processor for running control software. The control software monitors the patient's condition and reports it to the central server 4, and controls the delivery of insulin doses to the patient by transmitting control signals to the delivery device 2. The handset 3 also comprises a touch screen display 34, which displays information to the user and provides a user interface for the user to input data, modify the basal rate, and trigger extraordinary bolas doses.
[0020] As well as wirelessly controlling the pump, the handset 3 also has an integral blood glucose meter 32. The blood glucose meter 32 detects the amount of glucose in the patient's blood. The blood may be analysed at the meter 32 by pricking the patient's finger and depositing a droplet of blood on a slide, which is inserted into the meter 32. The detected blood glucose level can be brought to the attention of the patient on the handset 3, and the patient can decide to trigger a bolas dose based on the blood glucose information. The result of every blood glucose test is automatically logged by the software and becomes immediately available for reference via the server 4 to the patient, medical professionals and even family members (such as parents). More generally, the handset 3 runs various software applications which help the user (and other authorised parties) to keep track of diet, insulin, blood glucose and exercise (which as explained above is recorded automatically from a sensor in the delivery device). By automating data collection, the handset 3 eliminates, or at least reduces, the need for a diabetes journal and ensures that comprehensive and accurate clinical information are constantly available to the patient and medical professionals via the server 4.
[0021] When controlling the delivery device, the handset 3 sends wireless signals to the delivery device 2 to deliver regular periodic doses of insulin at a pre-determined basal rate, which is set on the handset 3 according to the recommendations of a medical professional. The basal rate may be adjustable by the user within certain constraints. However, the software is configured such that it is not allowed for the basal rate to be adjusted remotely by third parties such as doctors. The hand-held device 3 also allows the user to trigger extraordinary bolus doses, for example after eating carbohydrates or performing exercise. As with a basal dose, the bolus dose is delivered by the delivery device 2 in response to control signals sent wirelessly from the handset 3. The user is able to input the volume of carbohydrates which have been consumed at a relevant time and is also able to input periods of exercise and the hand-held device is able to recommend adjustments to the basal rate or when a bolus is needed. As discussed above, the glucose monitor 32 may have an influence on the dosage. All of this information is transmitted to the server 4. The hand-held device 3 also receives information from the delivery device 2, for example to indicate whether it is faulty or when the insulin cartridge needs to be replaced. It also provides an indication of battery level.

[0022] It will be understood from the above that the handset 3 and the delivery device 2 monitor and record clinical information while delivering insulin according to the body's needs. By providing this information to the server 4, it can be made almost immediately available to all those who need to see it. In particular, a mobile connection to a secure online management portal makes it possible for patients, clinicians and parents to be made constantly aware of, and able to react to, changing conditions. A diabetes clinic with patients using the system is able to see the current status of all its patients on a single screen, delivered to the clinic in real time. The portal can be accessed over the Internet in the clinic or through a smartphone. In addition to making it possible for a patient to access their latest clinical information online, it is possible for the patient to see simple visual analysis of their data, for example to identify trends and patterns in their blood sugar, and to immediately see their insulin dosing habits. This information can all be viewed using a simple online web portal that can be accessed from home, from work or from a smartphone. The server can also transmit SMS messages to a child's parents to let them know their child's information and state of health.
[0023] A patient using the system is provided with a personal login to the secure mobile diabetes management portal. Once logged in the patient can see all of their automatically collected data in the form of charts and graphs to help them understand where they might need to make adjustments. Exercise habits are mapped out in pie charts. An indication of exactly how and when the patient's insulin was delivered is provided. The patient's clinicians are able to see the same analysis and information, enabling them to call or text the patient whenever needed with guidance and advice.
[0024] From a single online dashboard screen, the clinic has access to the status of all the patients on the system; including current blood sugar, average blood sugar, insulin dosing, hypo frequency and blood testing habits. At a glance, anyone having difficulties can easily be identified for an immediate response. With a single click, all the data for a patient is analysed and charted to identify trends, patterns and problems. Using the portal, clinics can completely reorganise the way in which patients are managed. Text and email can be used to check on recent events. Clinic visits are focused completely on current and accurate information.

an actuator layer (120) carrying an actuator for delivering a therapeutic product to a patient; 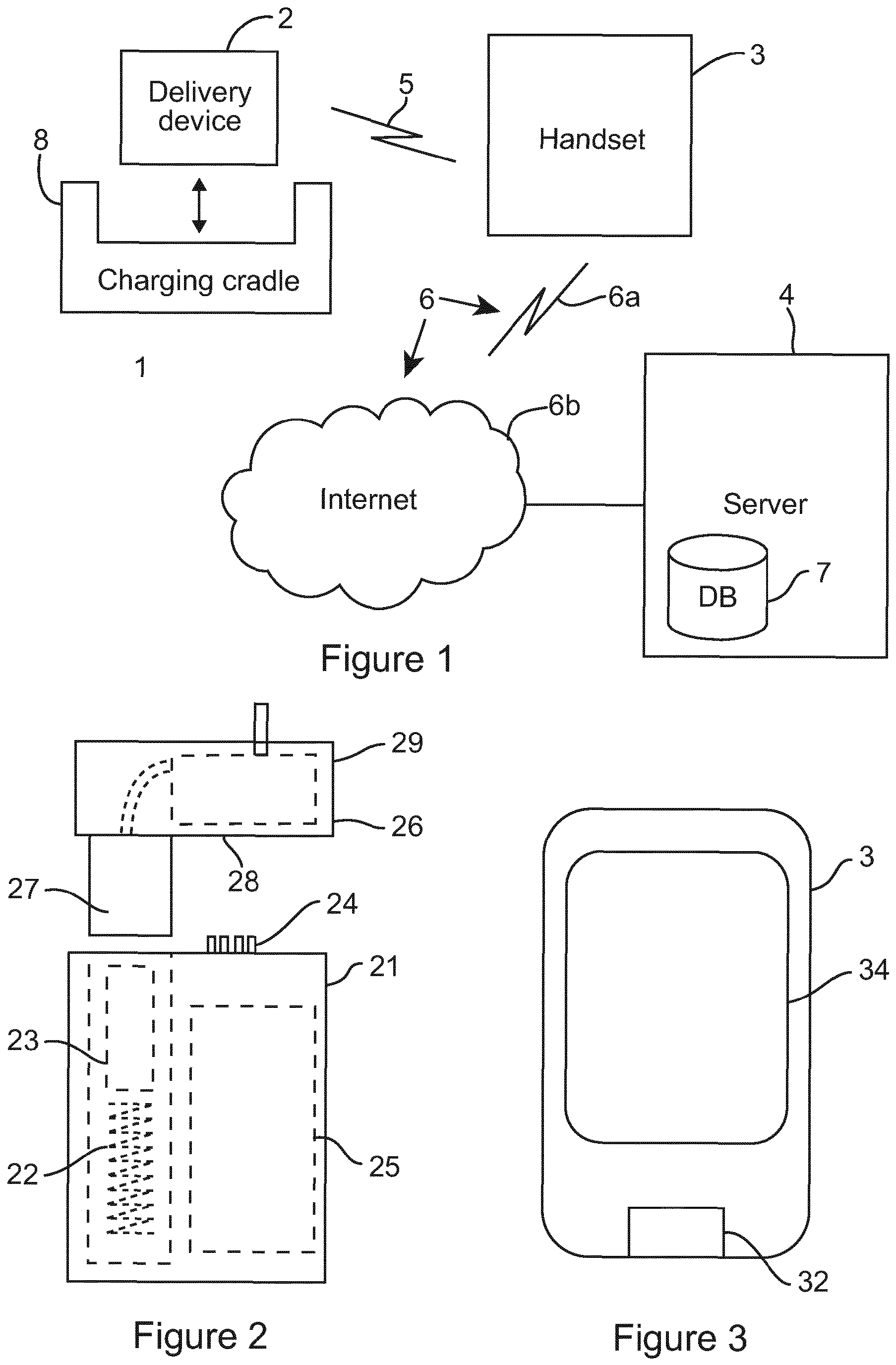 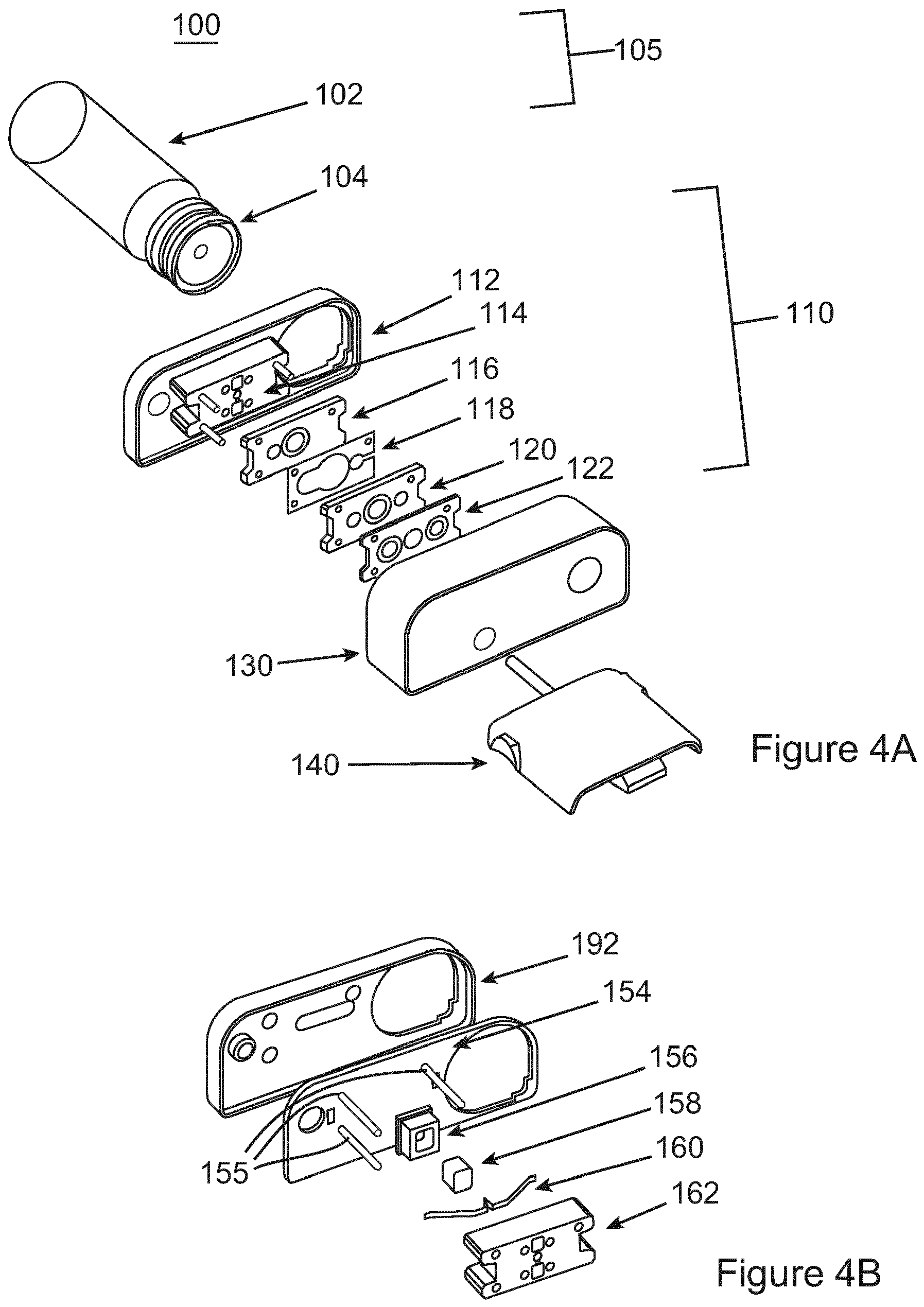 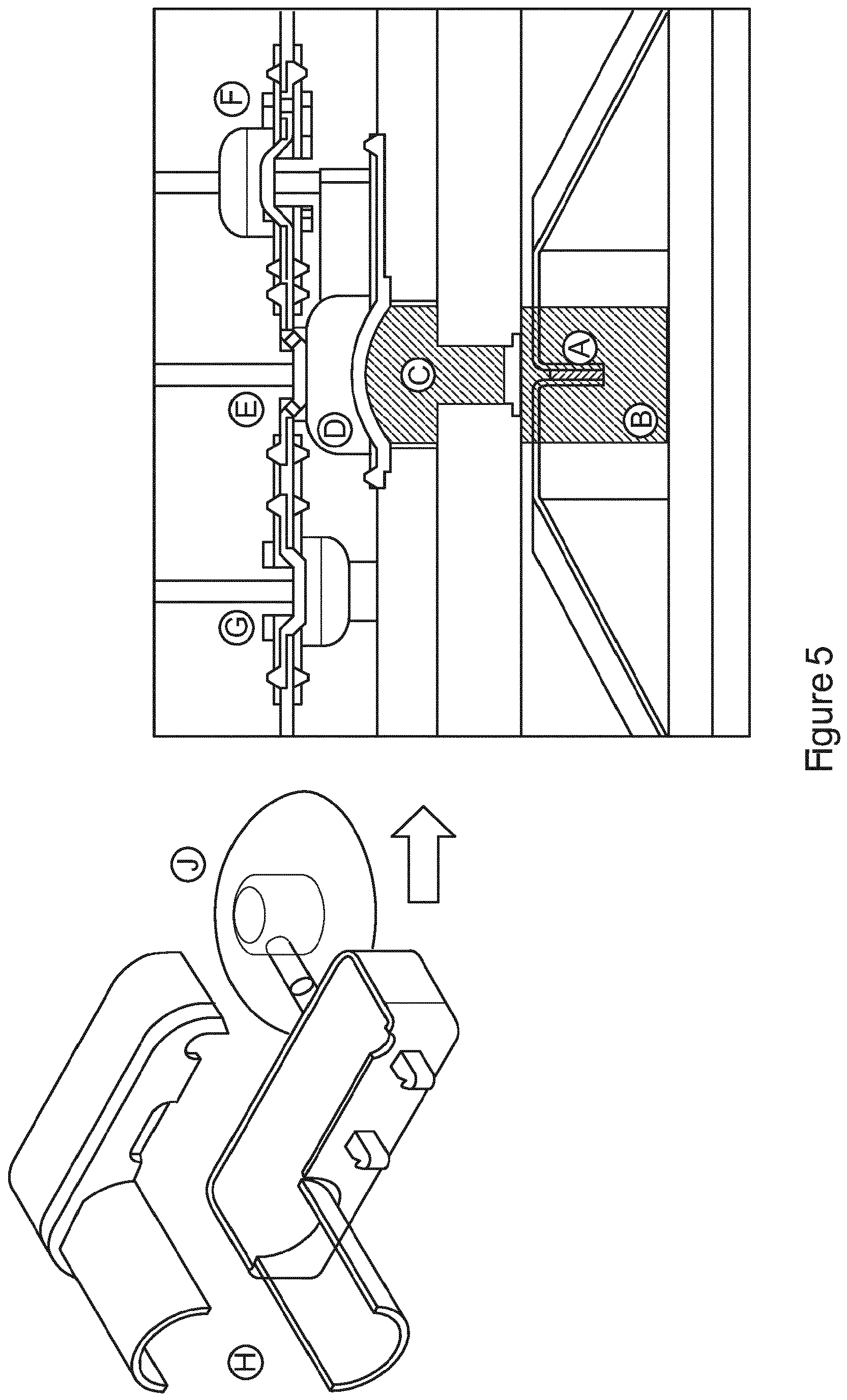 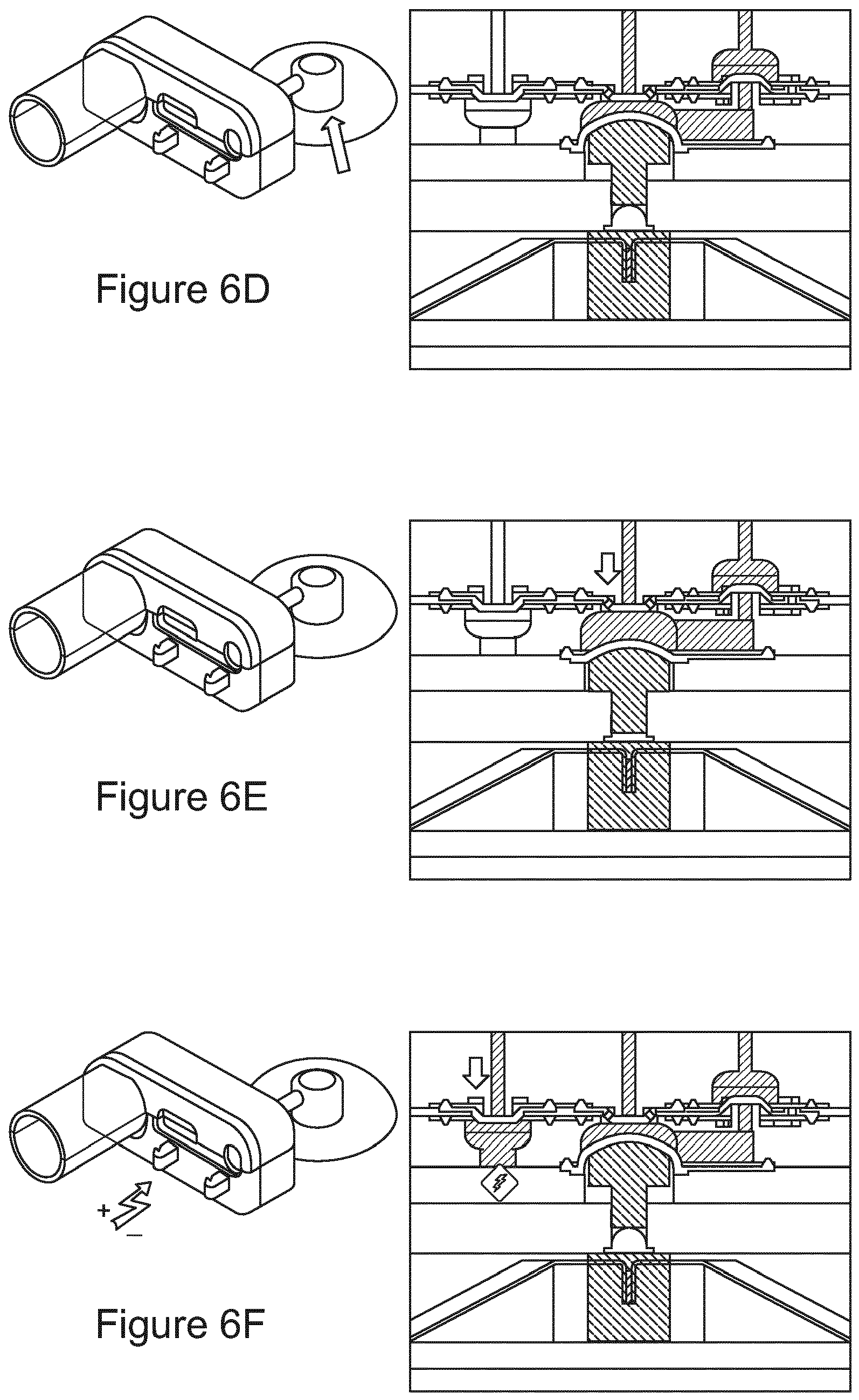 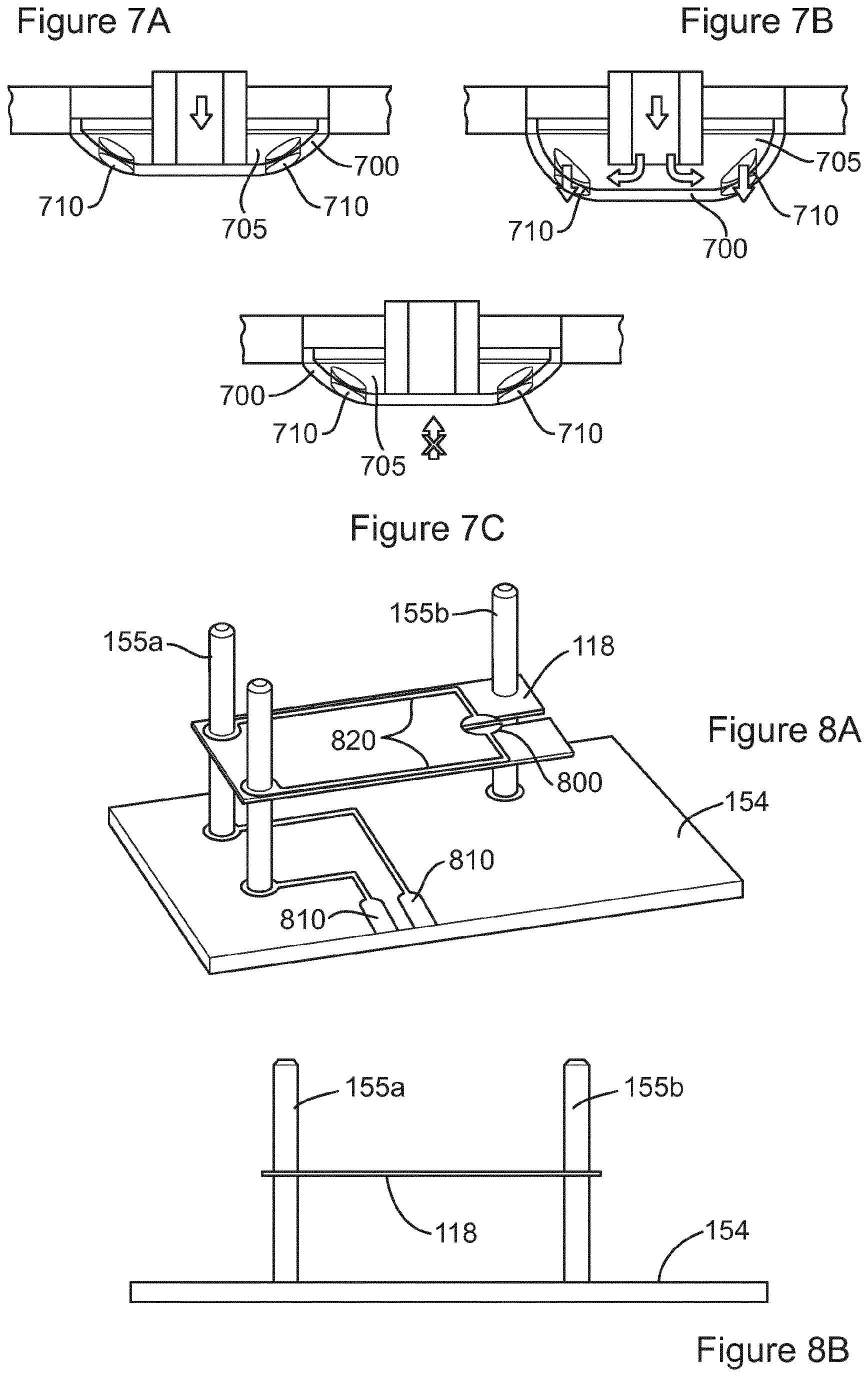 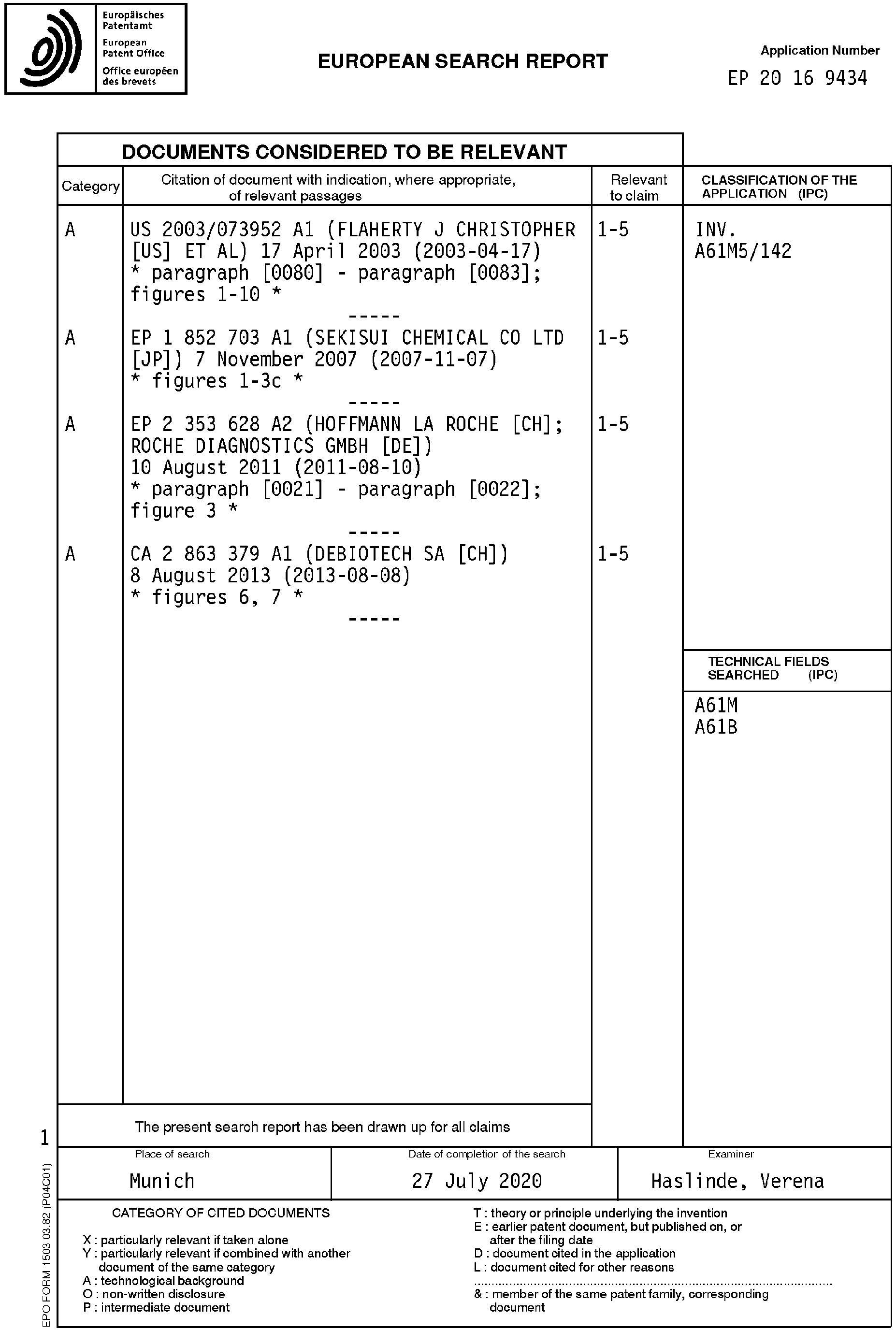 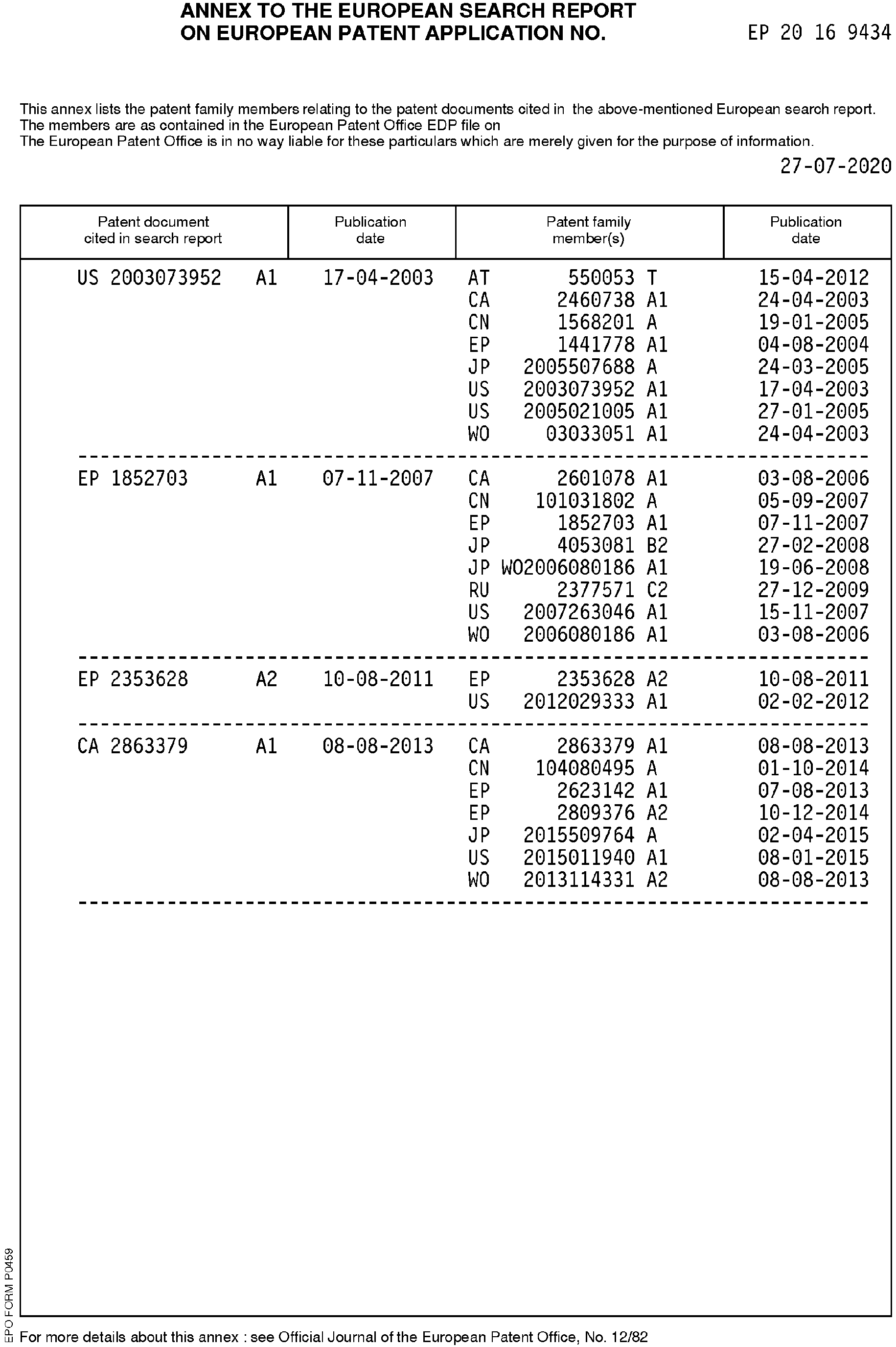