[0001] The present invention concerns a test method and a test device, adapted for diagnoses. In particular it relates to immunoassay having an improved sensitivity compared to the known immunoassays.

Short disclosure of the invention

[0031] Exemplar embodiments of the invention are disclosed in the description and illustrated by the following drawings:

Examples of embodiments of the present invention

[0032] Fig. 1 shows the basic optical unit used. Emitted light from the biosensor device hγ EX arrives at the interference filter 101. This filters out a majority of exciting photons based on the wavelength and the light leaving the interference filter at the bottom is enriched in hγ EM light which constitutes the useful signal for the fluorescing analyte. The useful signal should be understood as the signal specific from the bounded ligand. Passing through an optional aperture 102 the light is then measured using the light detector 103. This arrangement is a functioning arrangement but further improvements are possible.
[0033] Figure 2 shows possible alternative arrangements of interference filters. Fig 2a shows a planar filter, fig 2b shows a tilted filter 202 with respect to the light beam from figure 1 and yet figure 2c shows a second tilted filter 203. The second tilted filter differs from the filter 202 rotated that is in the xy axis by 90 degrees so that the tilting axes form an angle of 90 degrees when projected onto the xy axis. The angles β and the angle α by which the filters are tilted against the xy surface can be chosen freely. Preferably α = β > 10 degree and α = β < 80 degree, most preferably α = β is between 10 and 80 degrees, more preferably between 20 and 60 degrees and even more preferably between 30 and 45 degrees.
[0034] Fig 3 shows a possible combination of 2 interference filters as shown in figure 2. The filters depicted in fig 2b designated 202 and filter 203 fig. 2c are combined to a one interference filter unit consisting of 2 filters 301 and 302. Fig 3a shows a three dimensional view of the filter arrangement. Figure 3b shows the same filter arrangement from the top view along the z axis looking down to the xy surface and fig 3c show the side of the same unit form the right side in direction x axis onto the yz surface.
[0035] Fig 4 is a three filter arrangement comprising a planar arrangement filter 401 according to figure 2a plus a second tilted filter 402 representing the subunit 202 in figure 2b plus a third tilted filter 403 representing filter subunit 203 in figure 2c.
[0036] The angle of tilt of the interference filter with respect to the xy surface, i.e. the angle of alpha α in Figure 2c respectively beta β in fig 2b has a variable values. When measuring a filter setup with α=β=30 degree as compared to a plane filter in xy-surface orientation one observes at least 2-3 fold reduction in stray light. Furthermore varying the angle of α=β=30 to is about twofold more effective in reducing the stray light when compared to a tilted filter combination with α=β=15 degrees tilt.
[0037] The device of the present disclosure is an improvement compared to a single interference filter design. In particular, it comprises more than one interference filter. At least two interference filters are used in tandem and tilted at different angles with respect to the emitted light. in such a way that their angle β is different from degree and they a tilted by about 15 to 30 degree in the axis of the tilting angle with respect to the direction of the emitted light. Furthermore when the two filters are arranged in such a way the tilting axis of filter 1 is rotated by 90 degrees with respect to the tilting angle of the filter 1. It is surprisingly observed that a combination of two filters and leads to a much improved and more effective filtering of the stray light coming from the device. Even more effective in filtering out stray light is shown in figure 4 in a combination of a planar arranges filter 401 combined with a first tilted filter 402 and combine with a second tilted and by 90 degree tilted filter 403.
Table 1

[0038] The summary examples summarized in table 1 show a much reduced background that originates form residual excitation light derived entering the detector light. When comparing the effectiveness of blocking the triple filter unit is about 70 times more effective blocking unwanted straylight. Furthermore the variation of the background signal reduces in a similar way an allows as such to detect even very low signals from background. The same applies to the background signal which is reduced and an improvement of the Signal to noise ratio form 14.0 for the one filter device to 45.3 for the three filter device, i.e. by at least a factor of 3.

- irradiating the immobilized complex of tested molecule and fluorescent lignad with an emitted ligh at a predetermined wavelength, and

- detecting the resulting fluorescence of the complex of tested molecule and its bound fluorescent ligand, 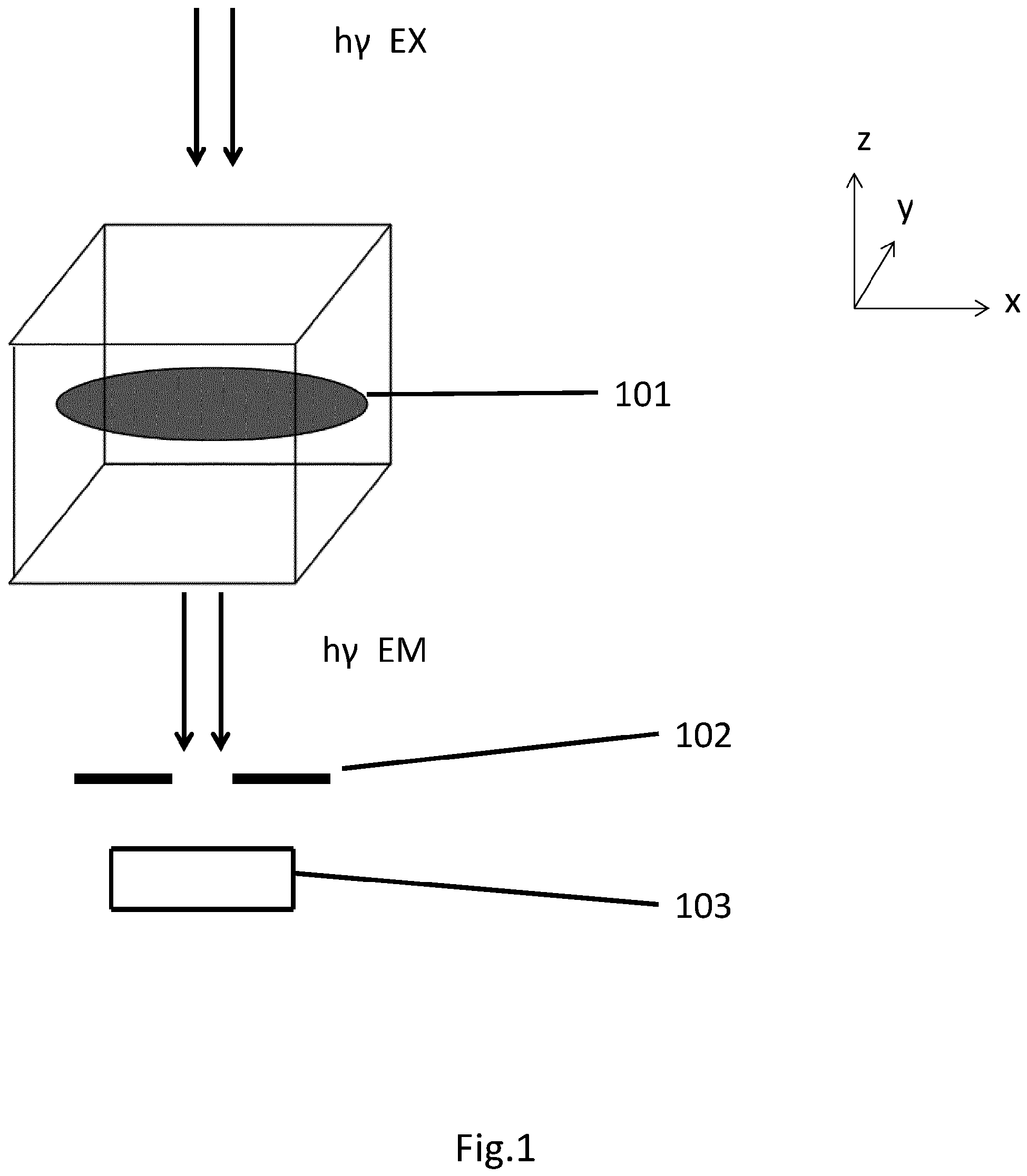 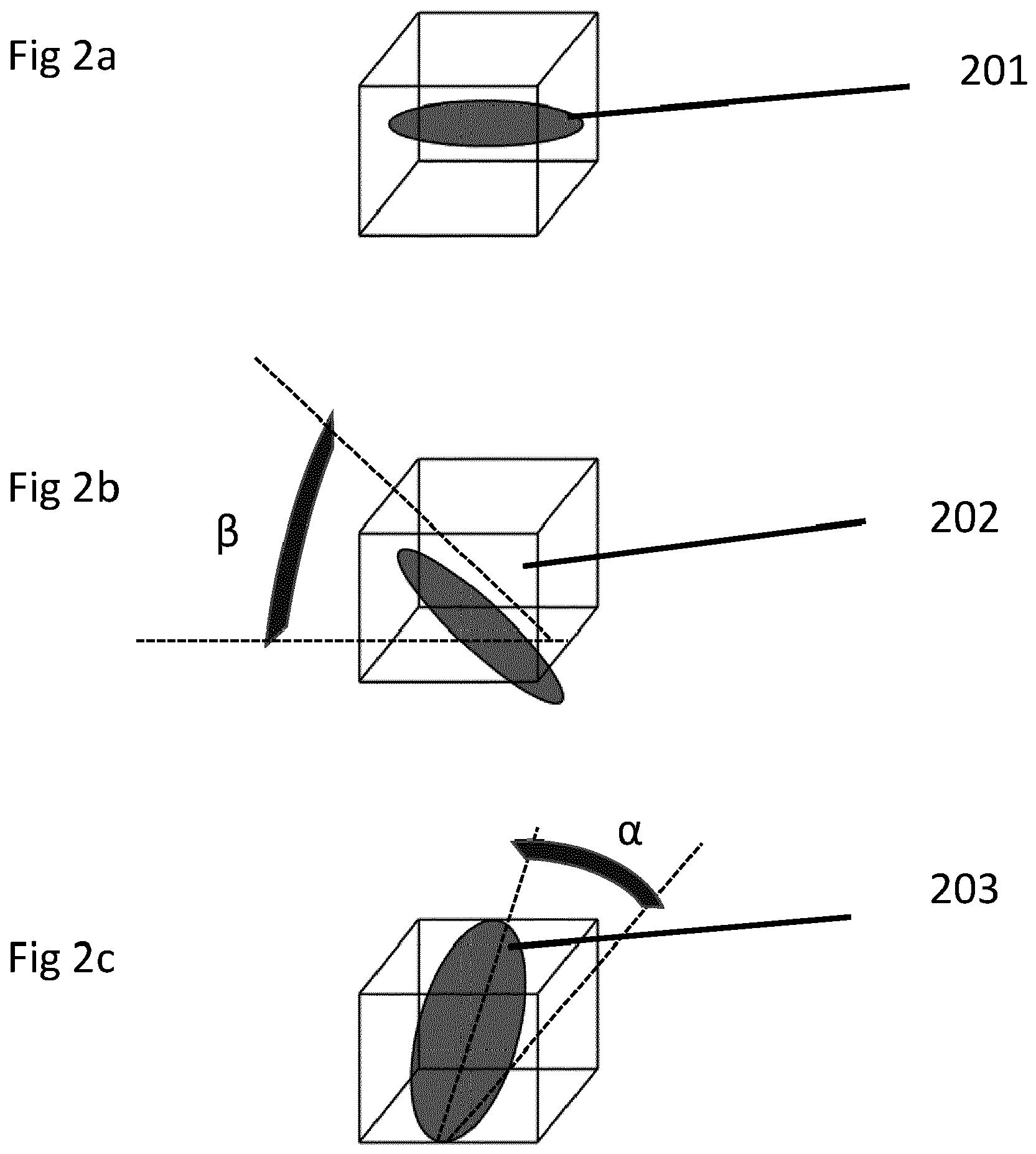 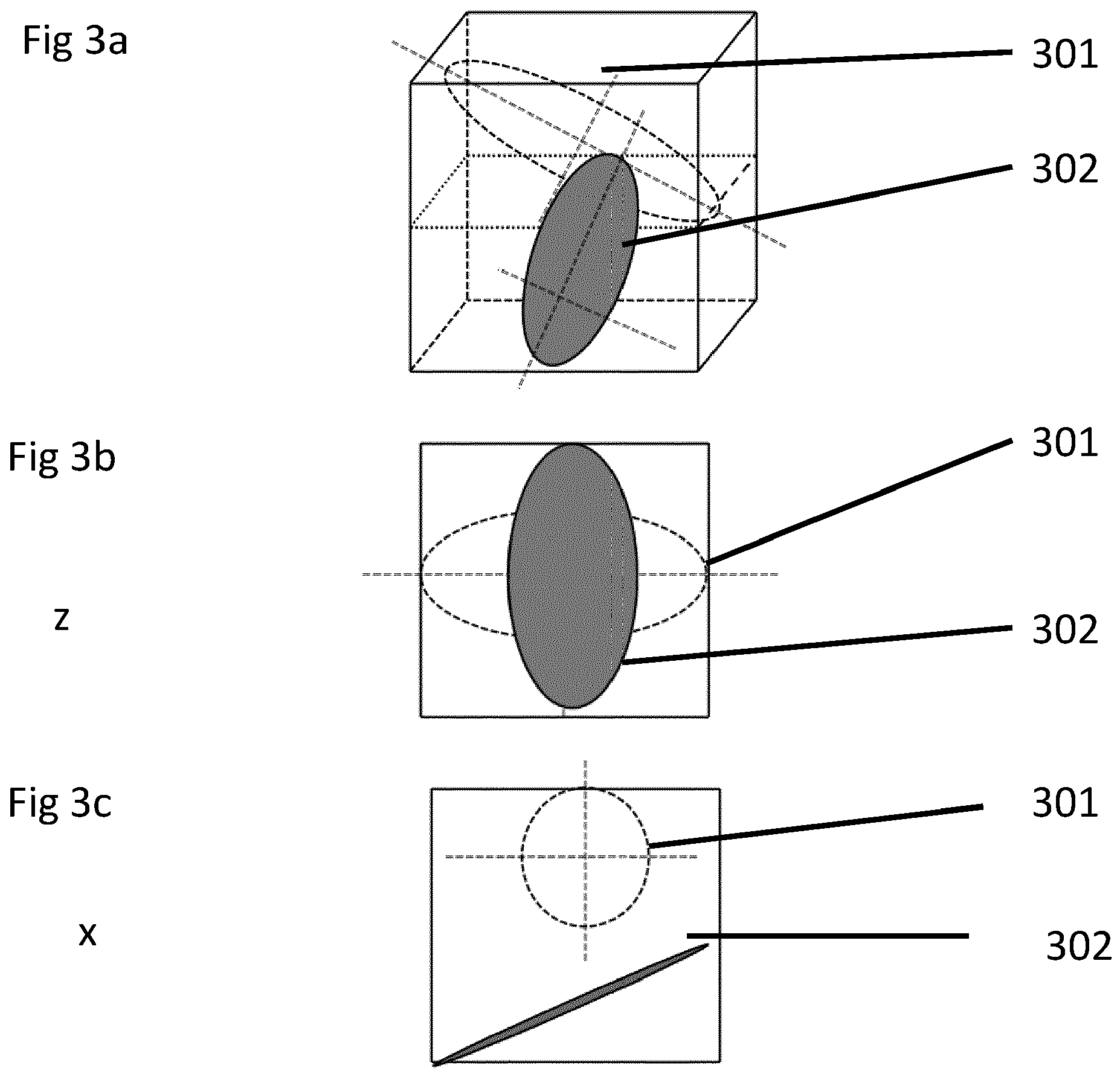 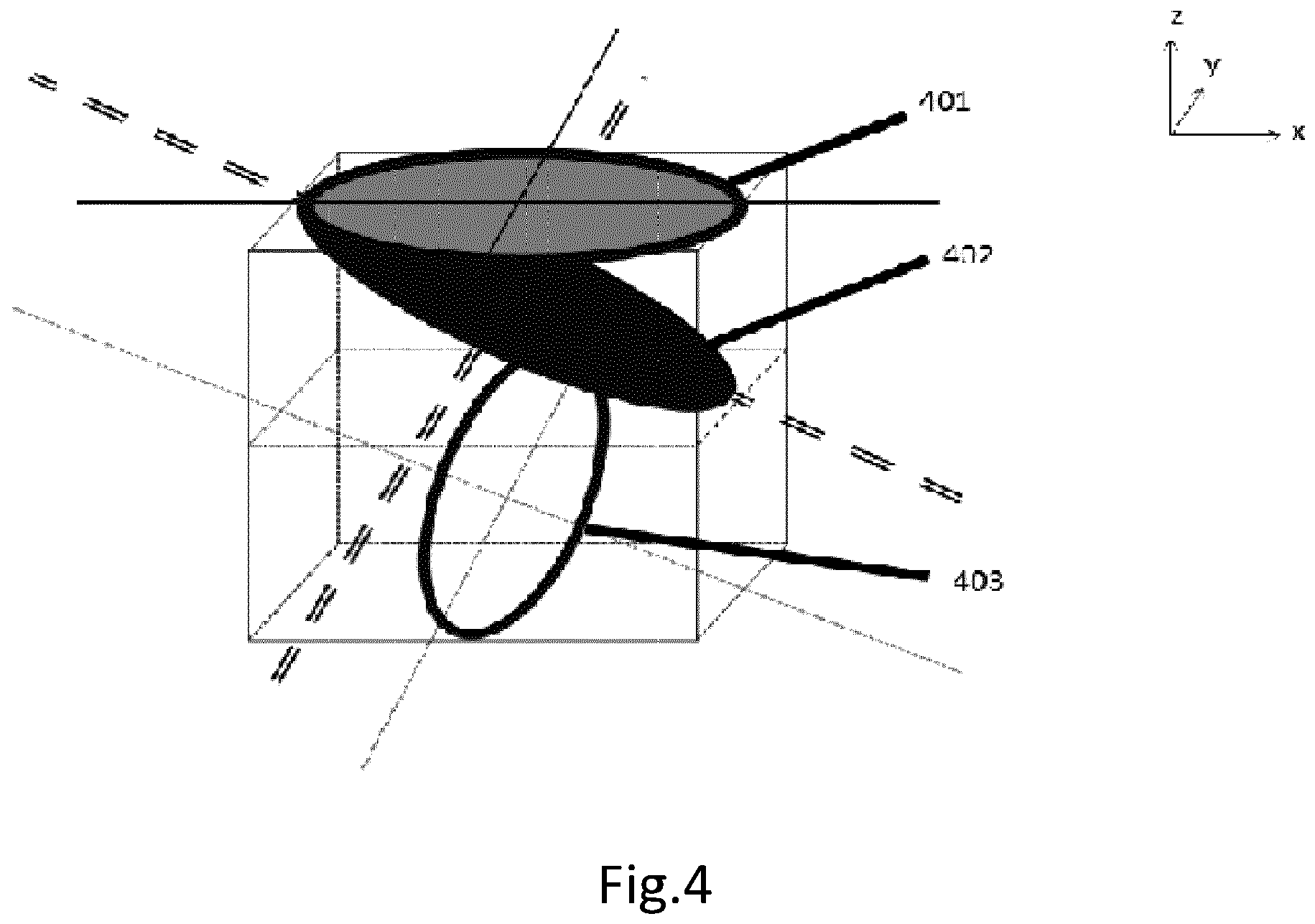 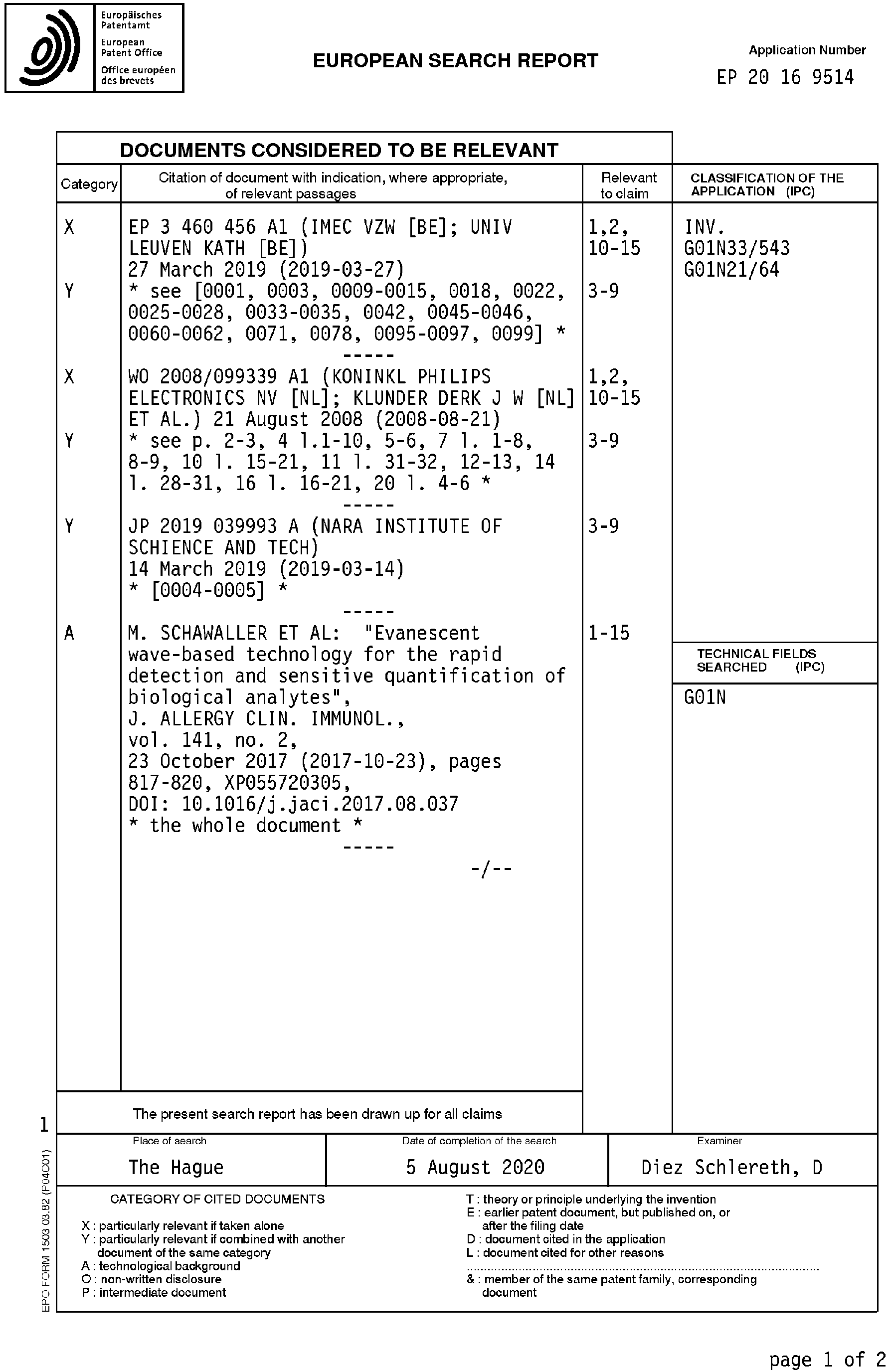 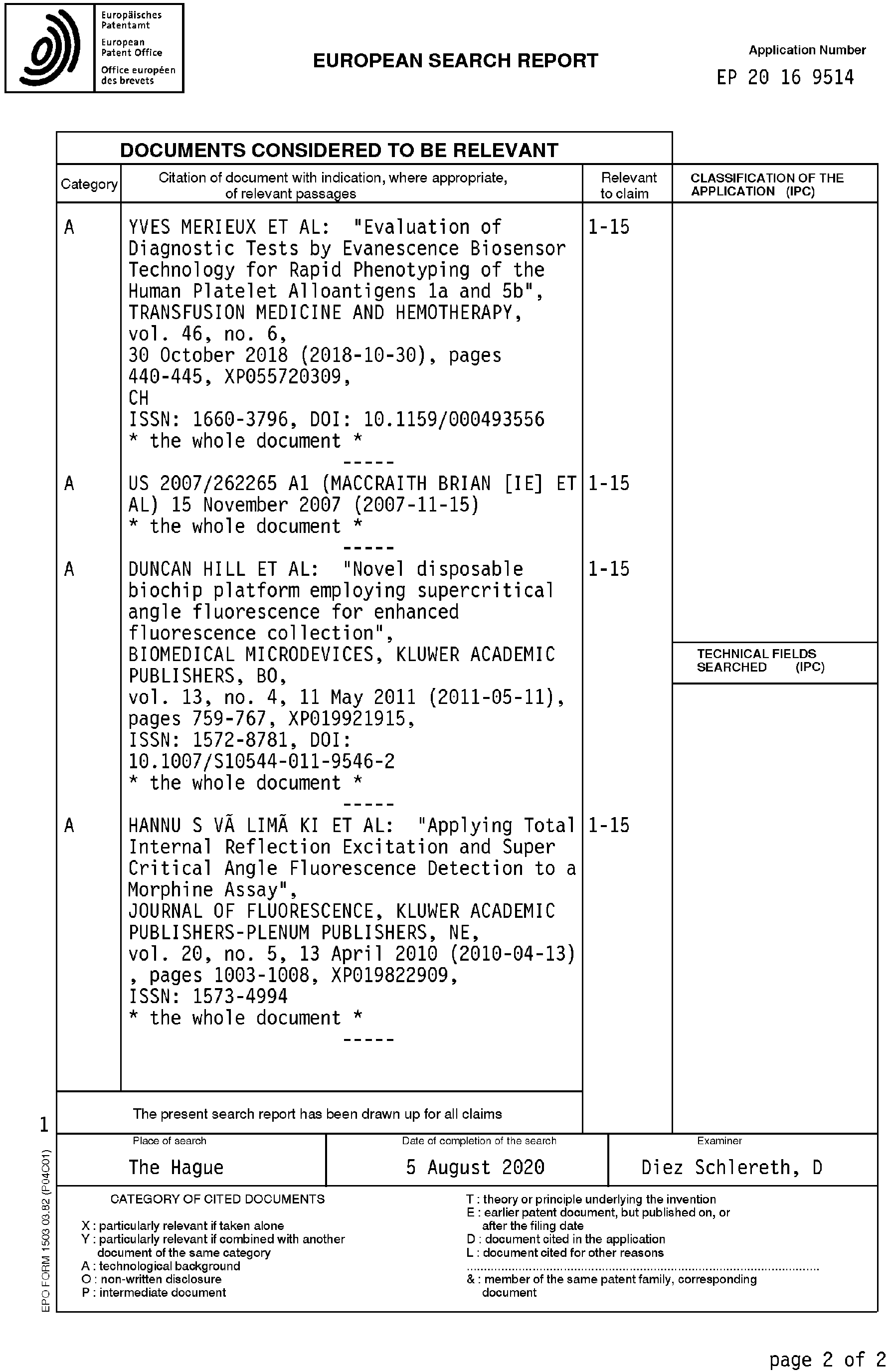 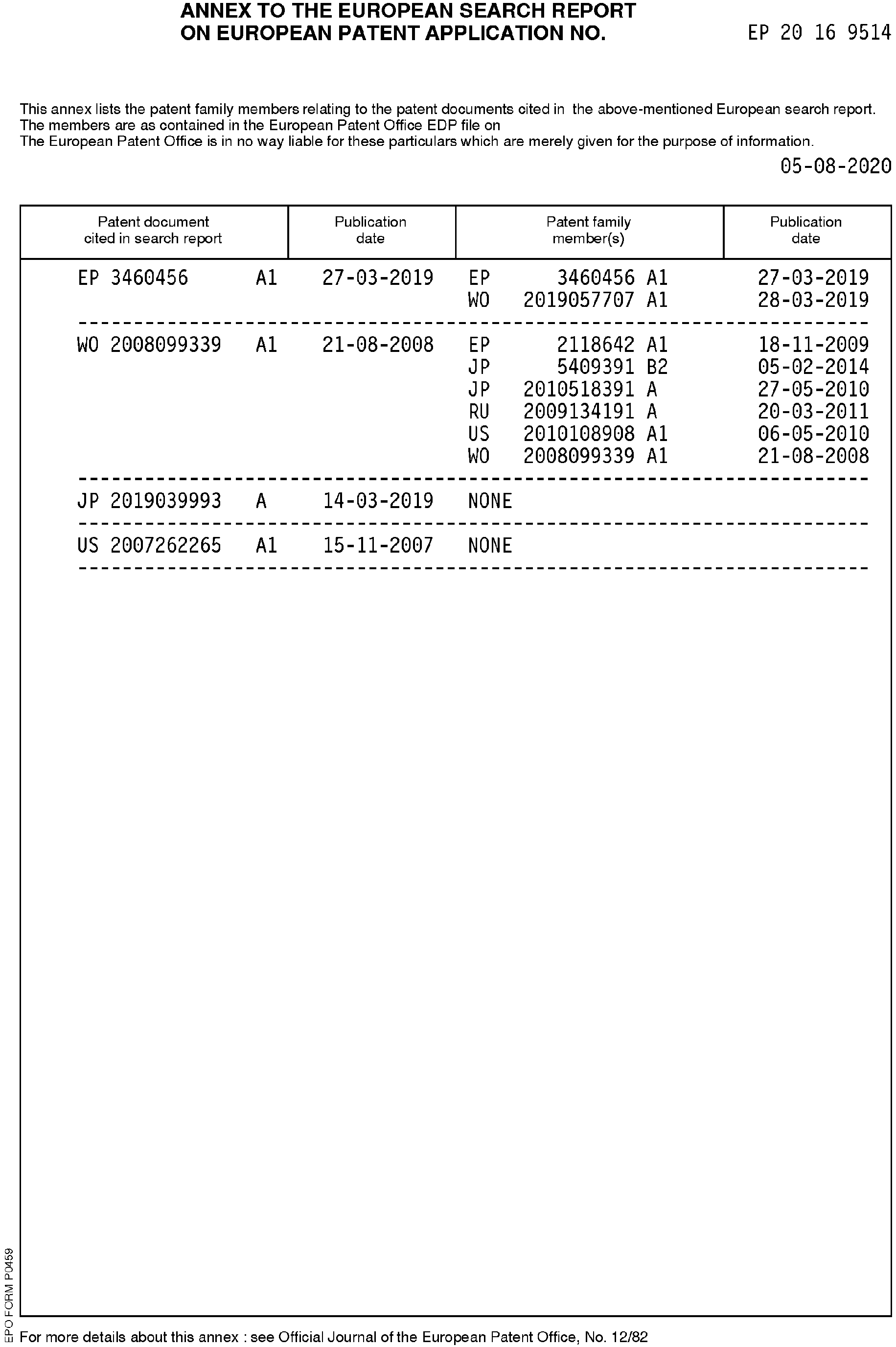