[0157] Then, a2, b2, c1, d1, e1 previously stored on D3 can be reconstructed. Then, a decision is needed where to store reconstructed a2. a2 can be written to any disk other than D1 and D5.
[0158] Similarly, b2 can be written to any disk other than D2 or D4. c1 can be written to any disk other than D4 and D6. d1 can be written to any disk other than D1 or D5. e1 can be written to any disk other than D2 and D6. In the sample given in Table 3, c1 is written to D1, a2 is written to D2, e1 is written to D4, b2 is written to D5 and d1 is written to D6. The meta file can be updated to META* and the META file can be replaced or erased. This can be done prior to replacing D3 and hence the system remains operative and redundancy is reestablished as soon as possible.
[0159] Note that while some implementations of a data handling device disclosed herein clearly profit from using air flow paths between the data storage units, it is possible to implement an improved data device even though no air flow paths are provided based on the ideas suggested herein. For example, when only data security against loss and/or theft is considered a problem, it may suffice to implement a system with erasure coding, in particular based on Mojette transforms, deleting all primary data and storing only the redundant "parity" information corresponding thereto on a large number of disks x+y, adding additional disks z to the set with x typically ∈ [8...20], [y ∈[2...10], z ∈ [2....10], typically, x+y≥15, y≥5. Then, access and testing schemes as described above can easily be used even without air flow paths, although, of course, this would be possible as well.
[0160] It will be understood that for storing extremely large amounts of data, a very large number of data storage units must be used. These typically will be controlled by a plurality of different data access circuits such as local GPUs, CPUs, FPGAs asf. To retrieve data, communication channels can then be provided between such units, using known protocols, e.g. ethernet protocols. It is preferred to use ethernet routers and/or switches and/or interfaces for other protocols onboard a plurality of PCBs, preferably on each PCB. A connection can be provided e.g. in a tree like manner. In such a case, a tree distance can also be taken into account when retrieving data to take into account latency, and also, energy of data transmission.
[0161] Also, using a tree-like topology is preferred, because then, the data storage units can be more easily grouped in branches, twigs, leaves asf., reducing the number of connections (edges) necessary at each node. This in turn is advantageous for another reason. Data storage units according to the invention can be operated in a manner where the heat density remains low, so that it is possible to increase the packing density without causing overheating. Increasing the packing density is possible inter alia by placing a plurality of data storage units into a number of mobile racks. In more detail, a plurality of PCBs, in particular housed in a housing with only a backside hot-pluggable data transmission/power connector, can be arranged in a shelve-like rack. As only a very limited number of interconnections between such racks. respectively to a power outlet, is necessary, it is feasible to move the racks without risk of disconnecting the racks either from one another or from power. This in turn allows to use mobile racks that can be moved in closed vicinity to each other as long as no physical access is required. Mobile shelves are well known for storing e.g. books in an archive. In a similar manner, data storage units can be placed in such mobile racks. Care should however be taken that moving the racks may not cause jerking in particular where disks are spinning. However, in such a case the risk may be minimized by properly distributing the access to disks in non-moving shelves or by temporarily "parking" the disks at least during acceleration of the shelves.
Table 1: Inital state after some use
Table 2:D3 fails
Table 3:Rebuild system on the fly

[0162] While in this application, the connectors in one embodiment have been disclosed to be SATA connectors, other interfaces and standards could be used as well, e.g. eSata, IDE, SAS, SCSI, NVMe asf.

and mounted in a manner allowing cooling,

and
data accessing circuitry adapted to

receive data to be stored,

write the information chunks onto the selected data storage units,

retrieves information chunks from a subset of the selected data storage units to reproduce data,

2. A data handling device according to claim 1, wherein

the integrated data accessing circuit is adapted to
access data distributed across the plurality of data storage units in a redundant manner,

3. A data handling device according to one of the previous claims, wherein

the integrated data accessing circuit is adapted to
access data distributed across the plurality of data storage units in a redundant manner,

4. A data handling device according to one of the previous claims, wherein
the mount comprises a PCB,

in particular in a hot-pluggable manner.

5. A data handling device according to the previous claim, wherein

the PCB is a double-sided PCB
and

is attached,
in particular pluggably connected,

on one side of the PCB,

information relating to the distribution of data across the plurality of data storage units.

common to a plurality of data storage units

the integrated data accessing circuit
and/or

the at least one data processor,

is provided for forcing air through the flow paths between the data storage units.
12. A data handling device according to the previous claim, wherein
the forced air ventilation is arranged to
use the same ventilator(s)
for cooling both

the plurality of data storage units

and at least one of
an integrated data accessing circuit
and 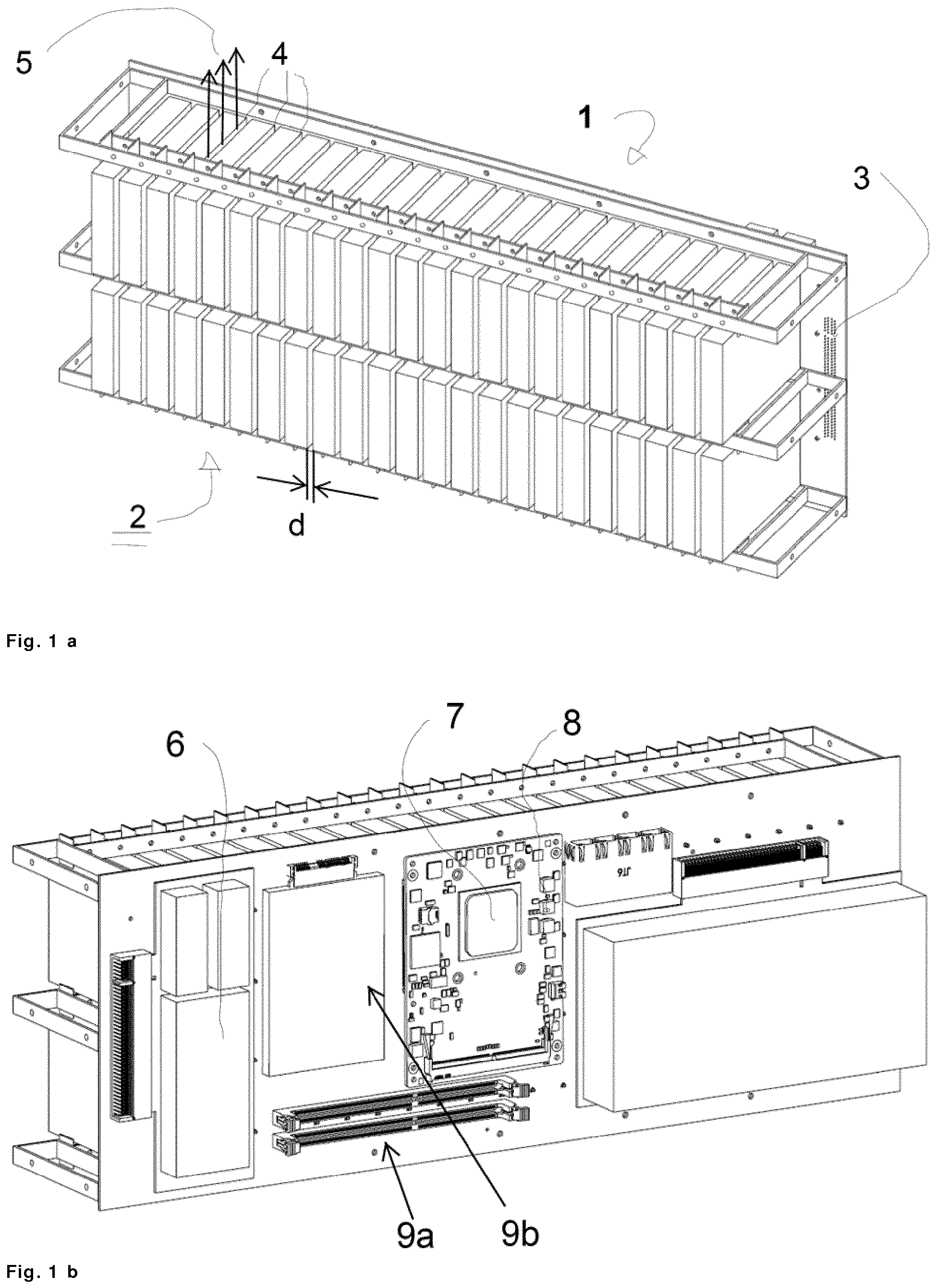 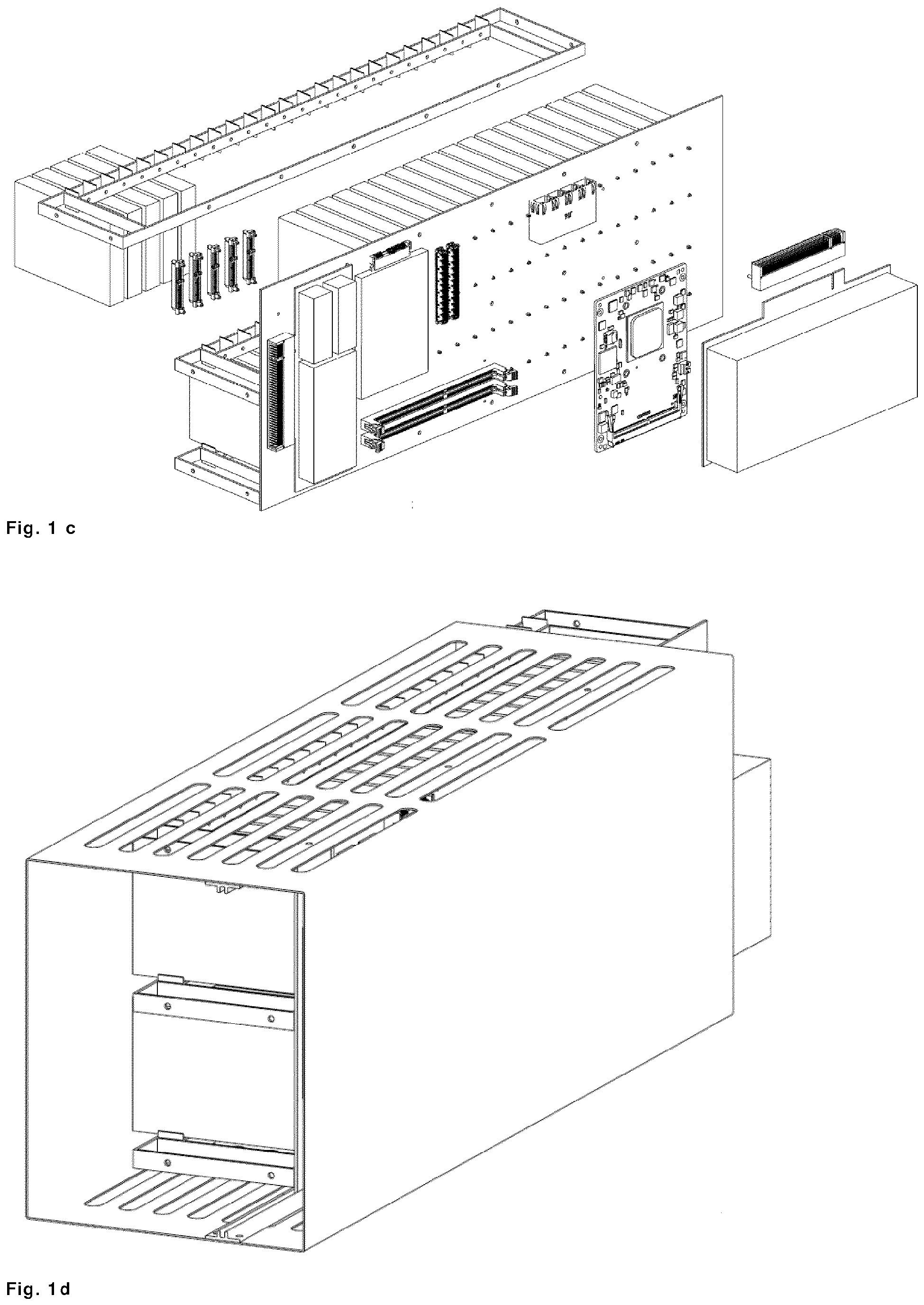 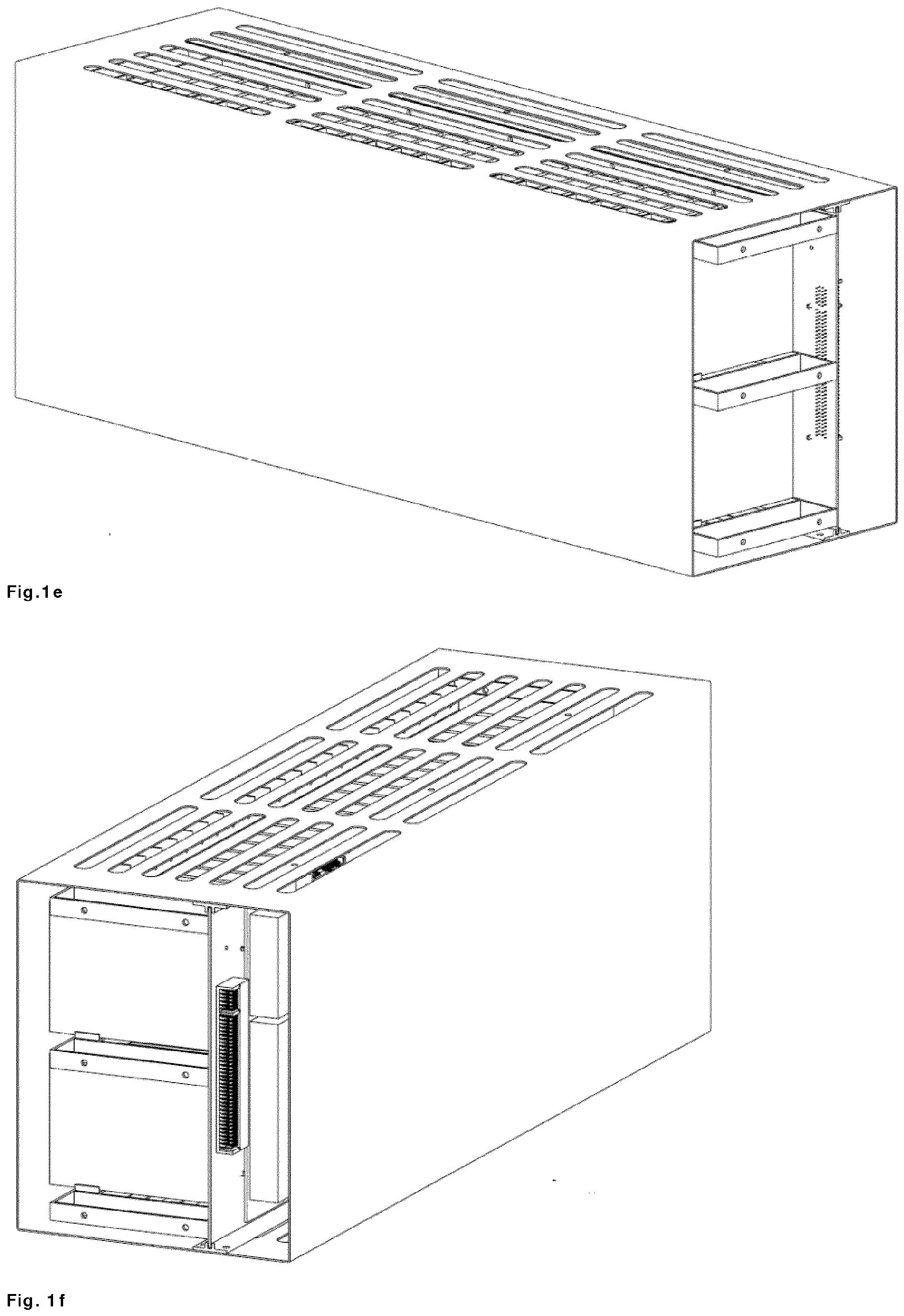 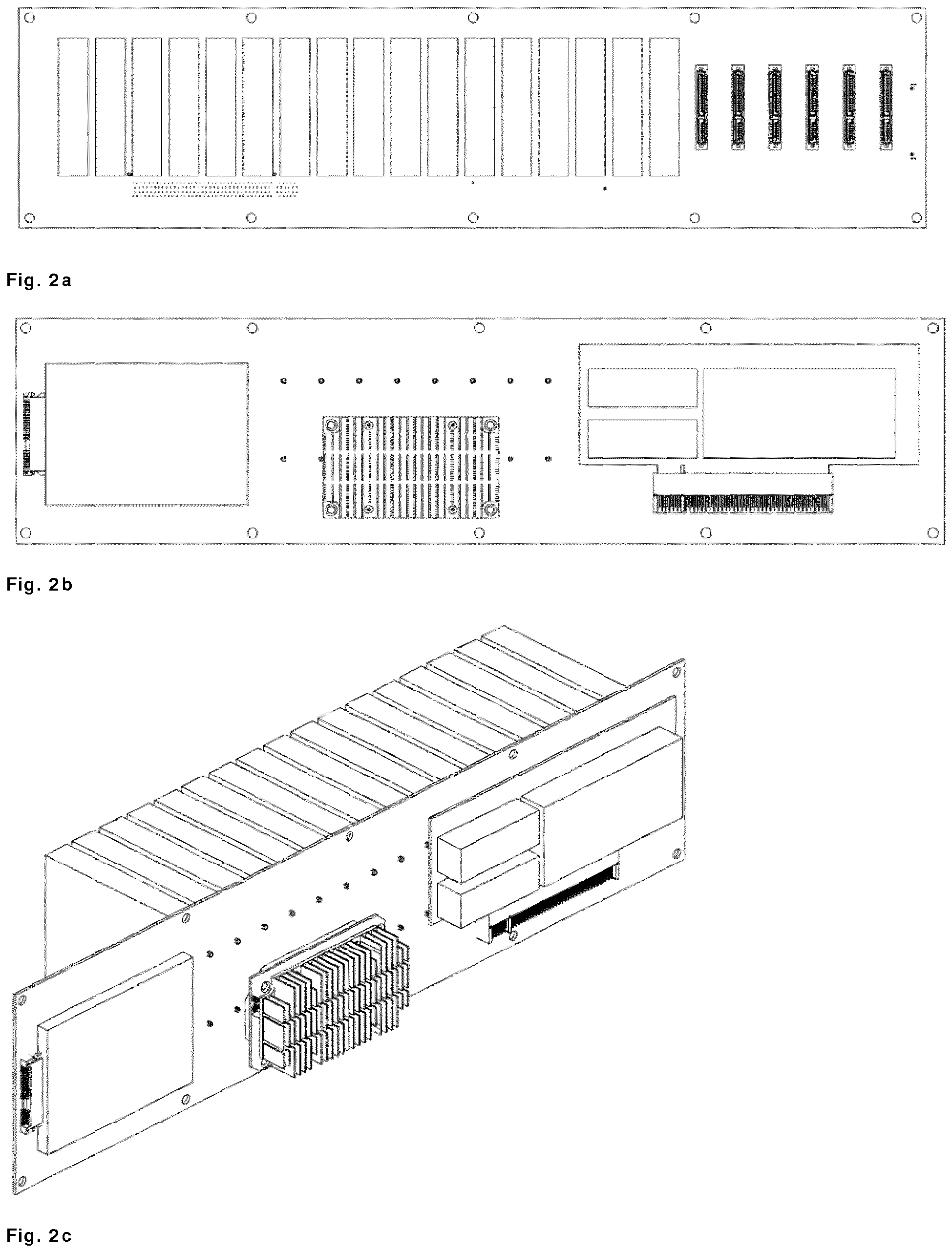 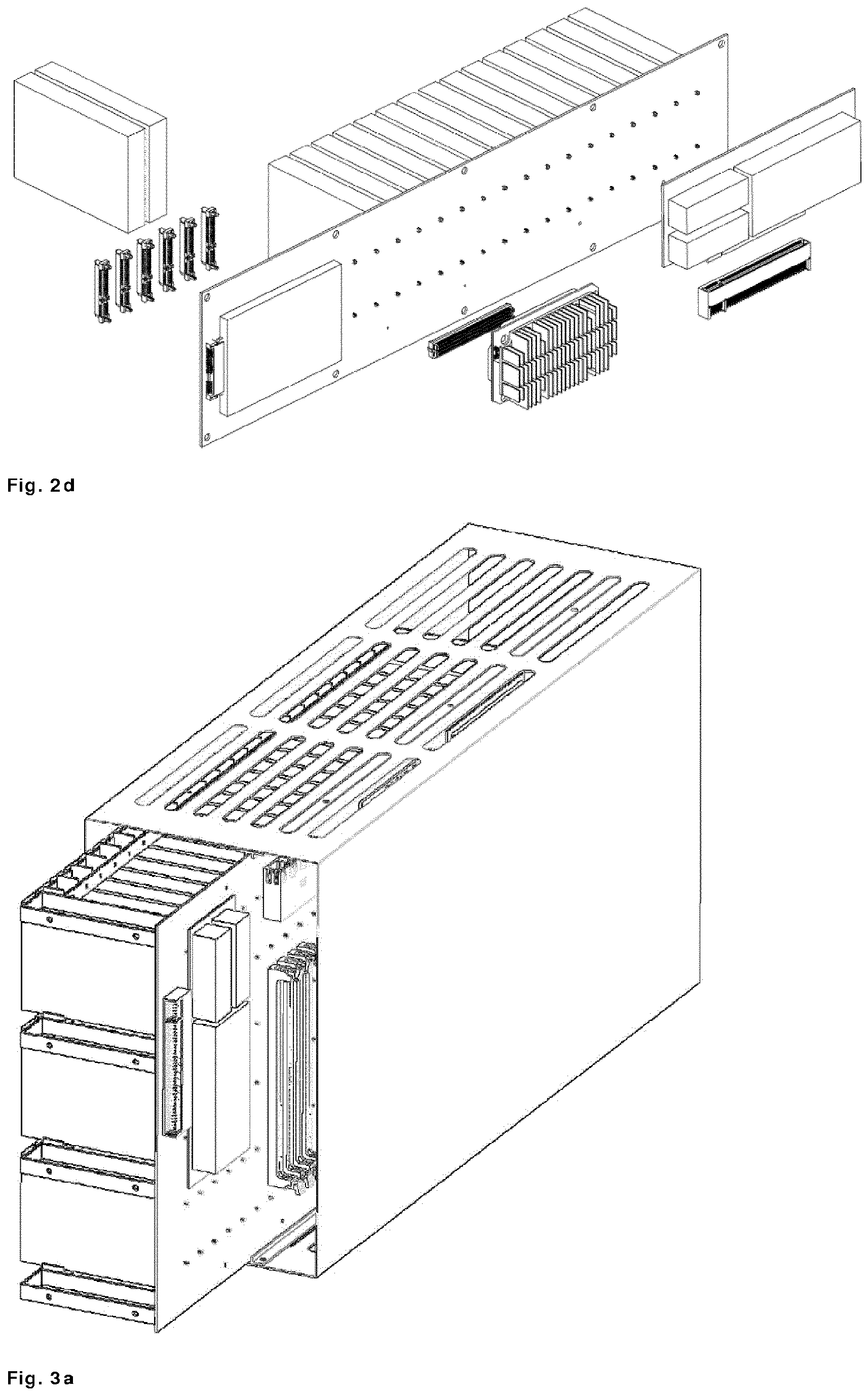 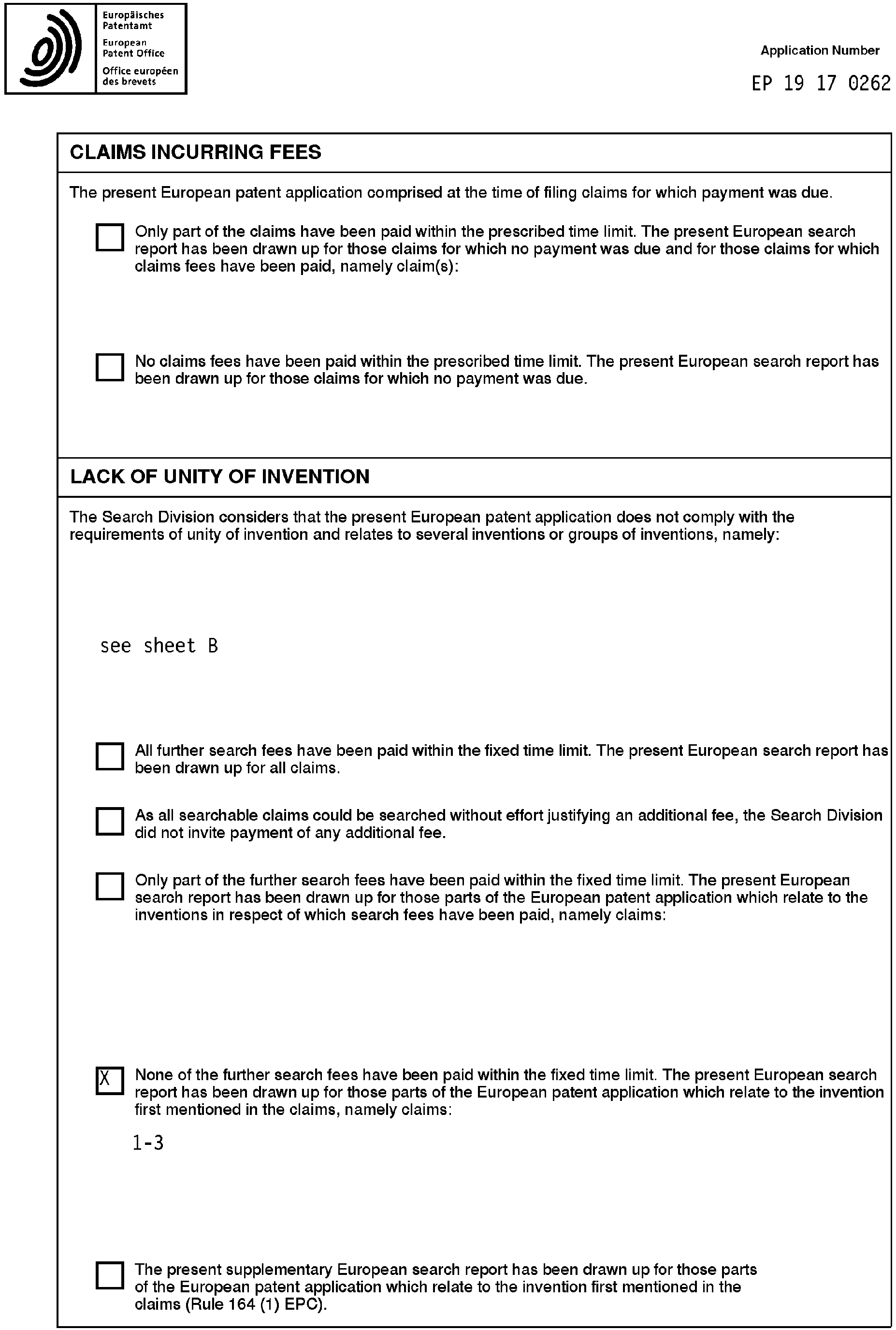 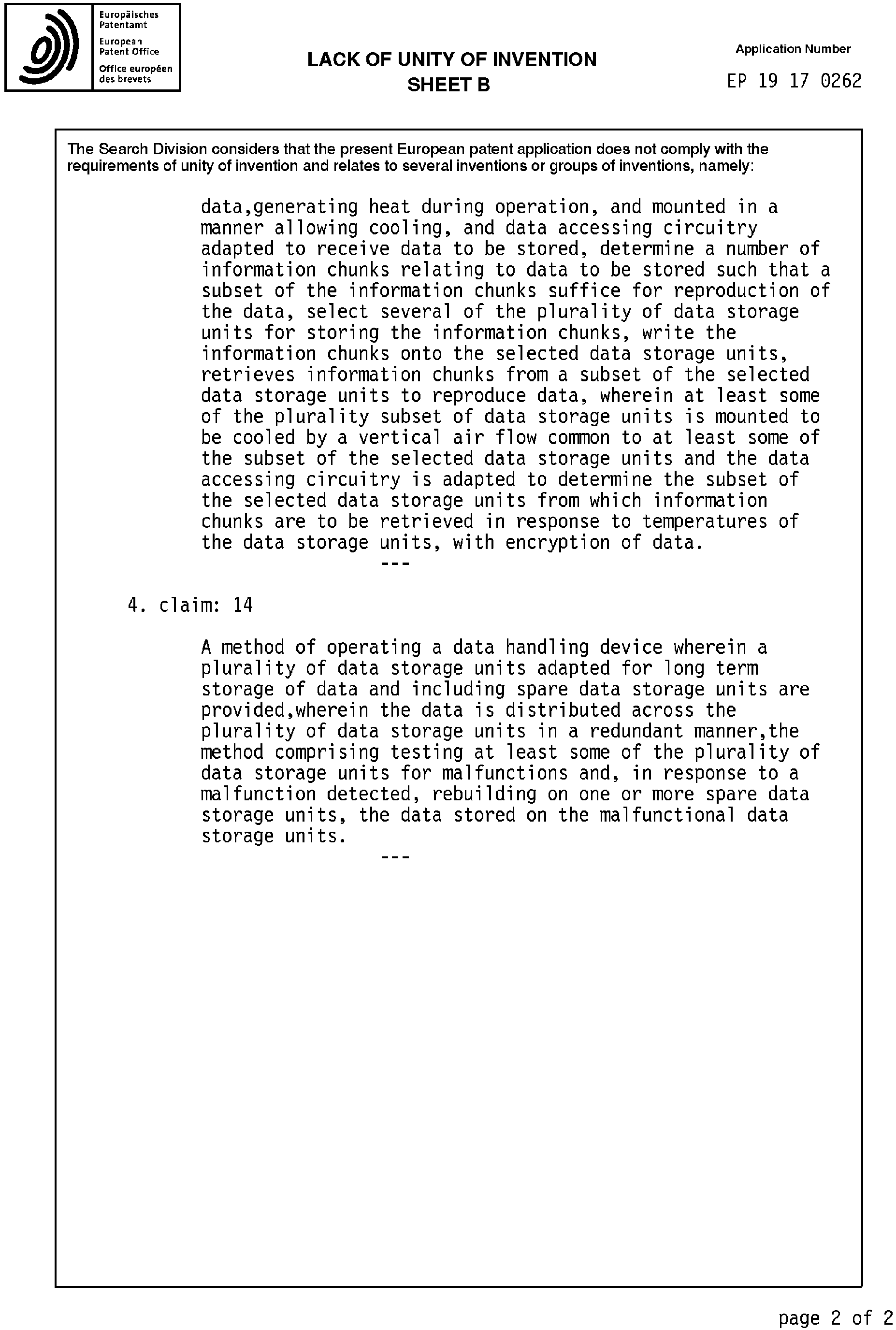 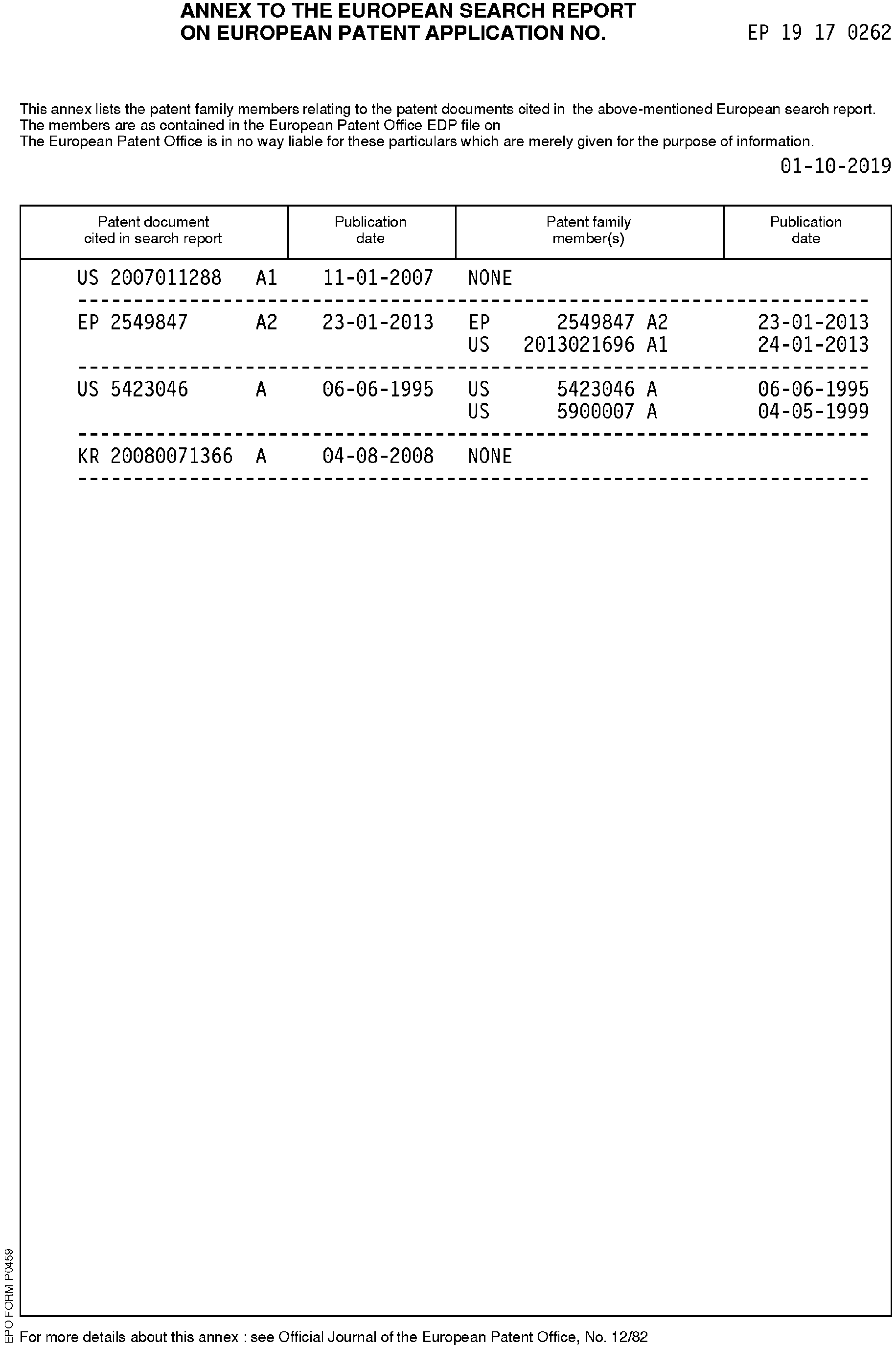