[0017] The invention is described with reference to the accompany drawing, wherein;

Figure 2 is a graph showing the blocking capability of the bispecific construct GS388 as compared to a simple mix of its unlinked constituent binding domains.

Figure 3 is a graph showing the relative apparent binding affinities of bispecific clones directed to PD-1 as compared to their single domain antibody constituents 9E3 and 3H4.

Figure 4 is a schematic demonstrating the disruption of the binding interaction between PD-1 and a biotinylated recombinant human PD-L1Fc, by introducing a range of concentrations of the blocking antibodies or Nivolumab.

Figure 5 is a schematic demonstrating the apparent affinities of the bispecific clone GS388 and its parental sdAb constituent clones to PD-1 antigen, detected by an anti-cMyc-tag HRP detector conjugate.

Figure 6 is a schematic showing how the first functional moiety and the second functional moiety of the bispecific binding protein may be connected, non-covalently, by paired fusion tags, Specifically, the fusion tag is the CH2 and CH3 domains of an antibody Fc domain.

Figure 7 is a schematic demonstrating how an Fc domain can be used to generate an IgG-like homodimer with two arms, each arm being capable of binding two epitopes on the same target antigen.

[0078] The inventors have previously identified lead single domain antibody clones against PD-1. These clones are referred to as 9E3 and 3H4. The 3H4 clone is known to have a lower blocking capability compared to 9E3. When an in vitro ELISA-based blocking assay was performed with the two clones given in combination, it was found that a significantly lower blocking capability was achieved as compared to the commercially available Nivolumab (a PD-1 blocking antibody).
[0079] Briefly, the blocking capabilities of the individual clones were assessed by ELISA using Recombinant Human PD-1 (R&D Systems Inc) bound to the surface (see Figure 4). The binding interaction between PD-1 and a biotinlylated recombinant human PD-L1Fc (R&D Systems Inc) was then disrupted by introducing a range of concentrations of the blocking antibodies or Nivolumab. The disruption of the binding signal was then detected using streptavidin conjugated to a horseradish peroxidase detection enzyme along with an appropriate substrate.
[0080] Novel bispecific single domain antibodies were subsequently generated using the 9E3 and 3H4 PD-1 lead blocking clones, connected by a peptide linker. This peptide linker varied in length from 17 amino acid residues (17 aa) to 30 amino acid residues (30 aa) in length. Additionally, the orientation of the two lead clones was alternated for each peptide linker length. Four different constructs were thus generated for testing; i) 9E3-30aa-3H4, ii) 9E3-17aa-3H4, iii) 3H4-30aa-9E3 and iv) 3H4-17aa-9E3. These constructs were compared against the individual effect of the 9E3 and 3H4 clones, and against Nivolumab.
[0081] Surprisingly, it was found that all four constructs showed blocking capability approximately equal to that of Nivolumab, with the 9E3-17aa-3H4 construct, also known as GS388, (SEQ ID NO: 1) demonstrating slightly higher blocking activity than the rest of the constructs as well as Nivolumab (Figure 1 and Table 1). The present invention therefore may achieve at least the same blocking capability as a commercially available antibody against PD-1 with reduced toxicity.
Table 1: Binding capability of GS388, 9E3, 3H4 and Nivolumab at a range of different concentrations.

[0082] A second blocking assay was performed in a similar assay format to above comparing the lead bispecific antibody GS388 to a simple mix of its constituent sdAbs 3H4 and 9E3. The results showed >10 fold increase in blocking by the bispecific clone as compared to a simple mix of the constituent antibodies 9E3 and 3H4 alone (See Figure 2). This indicates that physical linkage of the two antibody constituents provides a very significant advantage as compared to simply combining the constituent antibodies in a mixture with no physical linkage.
[0083] A further ELISA based assay was subsequently carried out to compare the apparent affinities of GS388 and its parental sdAb constituent clones (See Figure 5). In brief, PD1 antigen was coated on an ELISA surface prior to blocking of the surface and probing with a gradient of either of the two constituent single domain antibodies 9E3 and 3H4 or one of the four bispecific derivatives, followed by washing and detection with an anti cMyc-tag HRP detector conjugate. The results of this assay demonstrated no increase in the apparent affinity of the bispecific clone as compared to that of the individual sdAb parents. Instead it could be seen that the four bispecific clones had similar IC50 values which were intermediate to those of the two constituent fragments 9E3 and 3H4 (See Figure 3).
[0084] The inventors have therefore surprisingly demonstrated there to be no increase in relative apparent affinity for the bispecific blocking clone GS388 as compared to that of its individual sdAb parents 9E3 and 3H4. This suggests that the increased blocking effect of the bispecific clone GS388 is due not to an increase in avidity from linking the two clones together as described for a different purpose in Jähnichen et al (2010) but rather is due to a physical blockage or steric hindrance of the receptor binding site caused by the peptide linker which links the two sdAb domains together crossing over the surface of the receptor binding site.

Sequences used throughout the specification and forming part of the description: 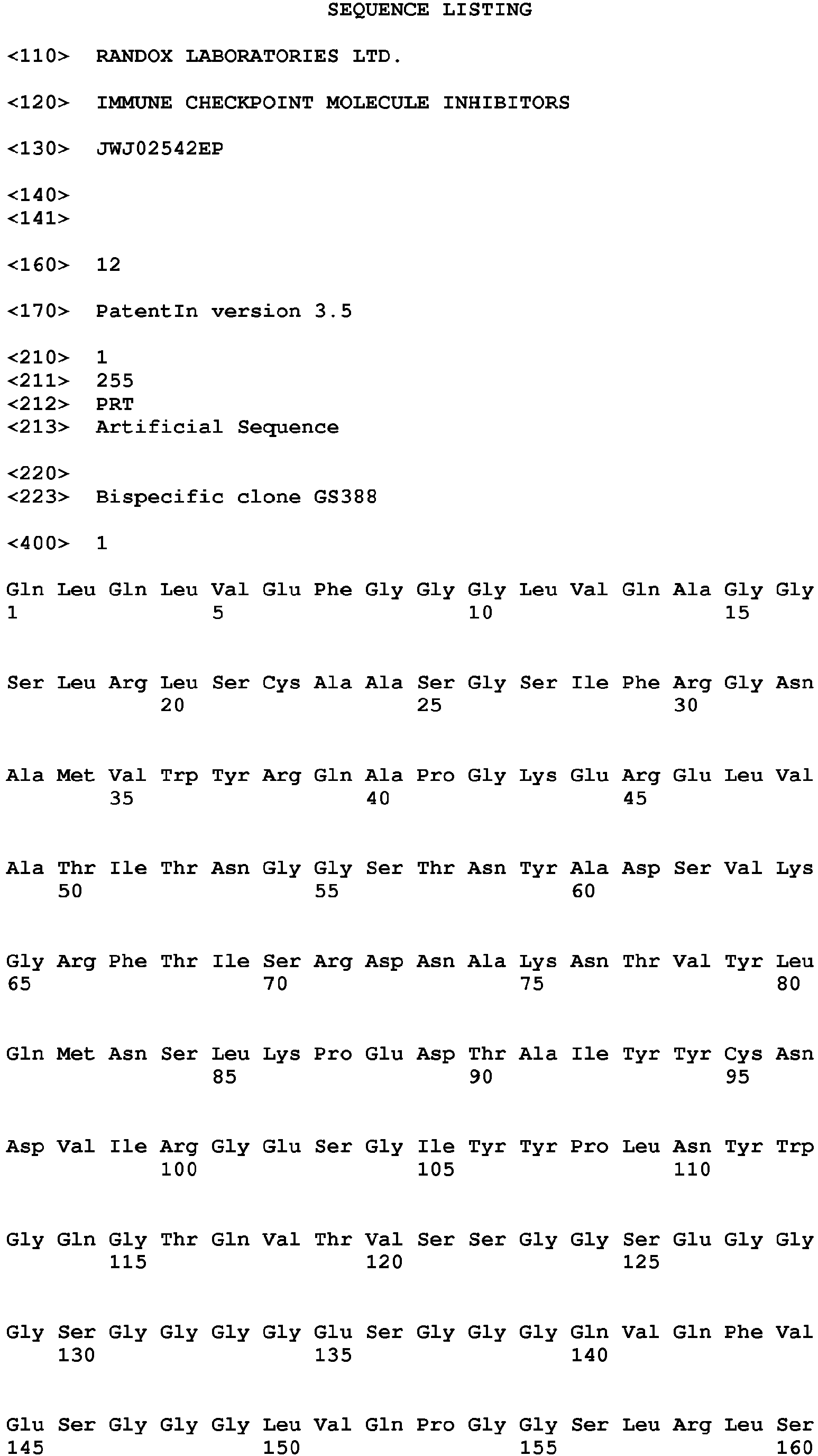 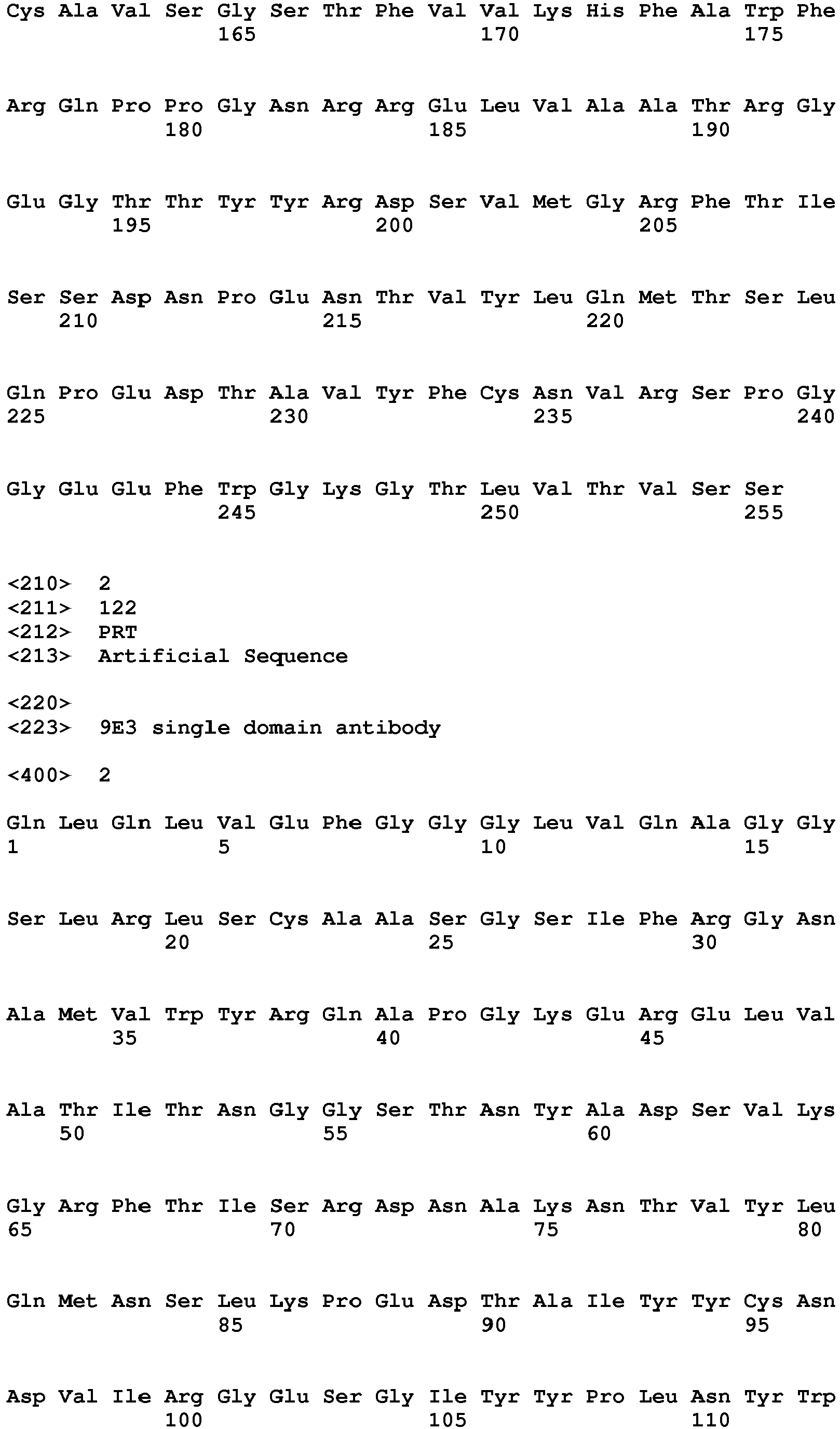 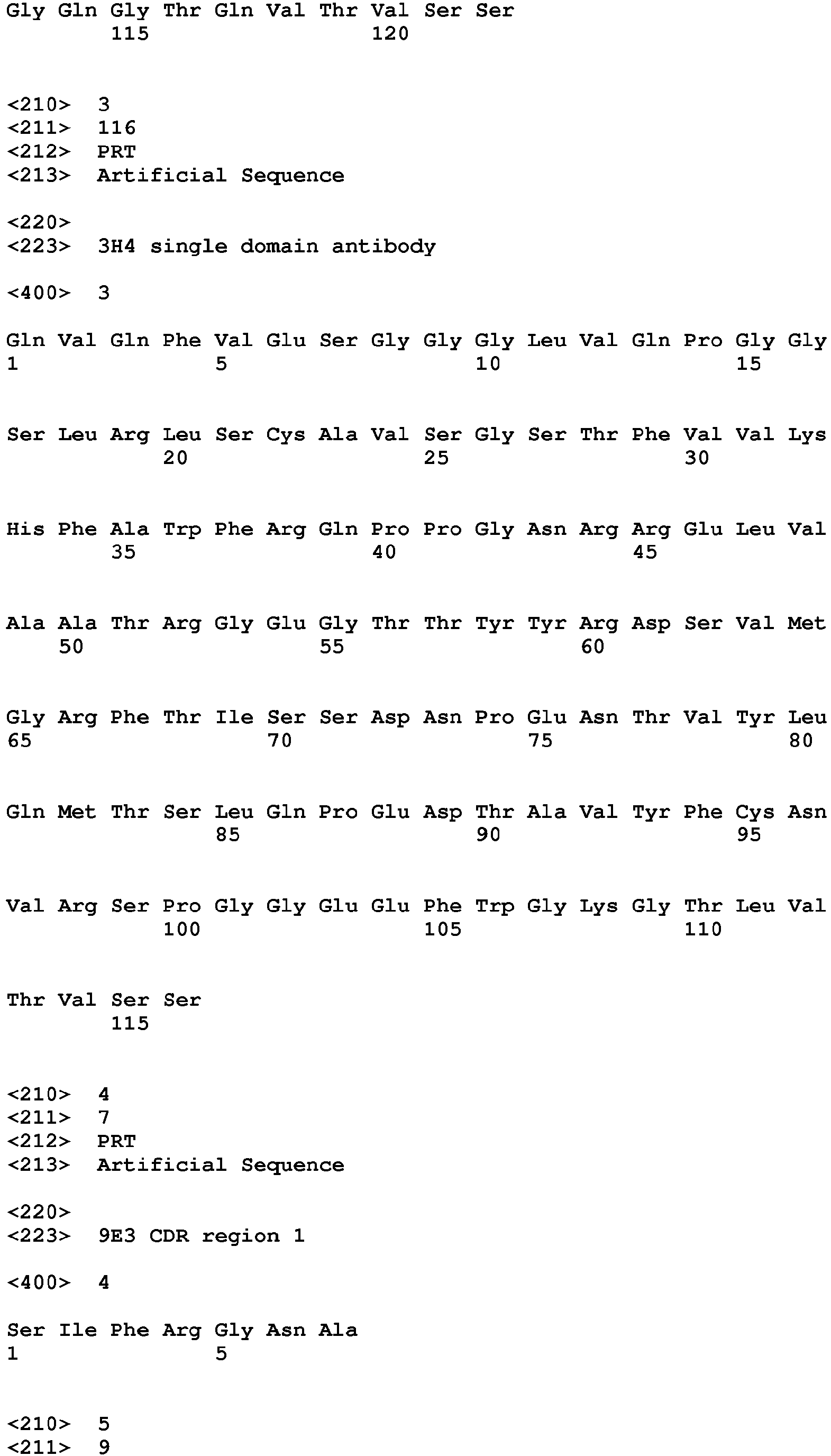 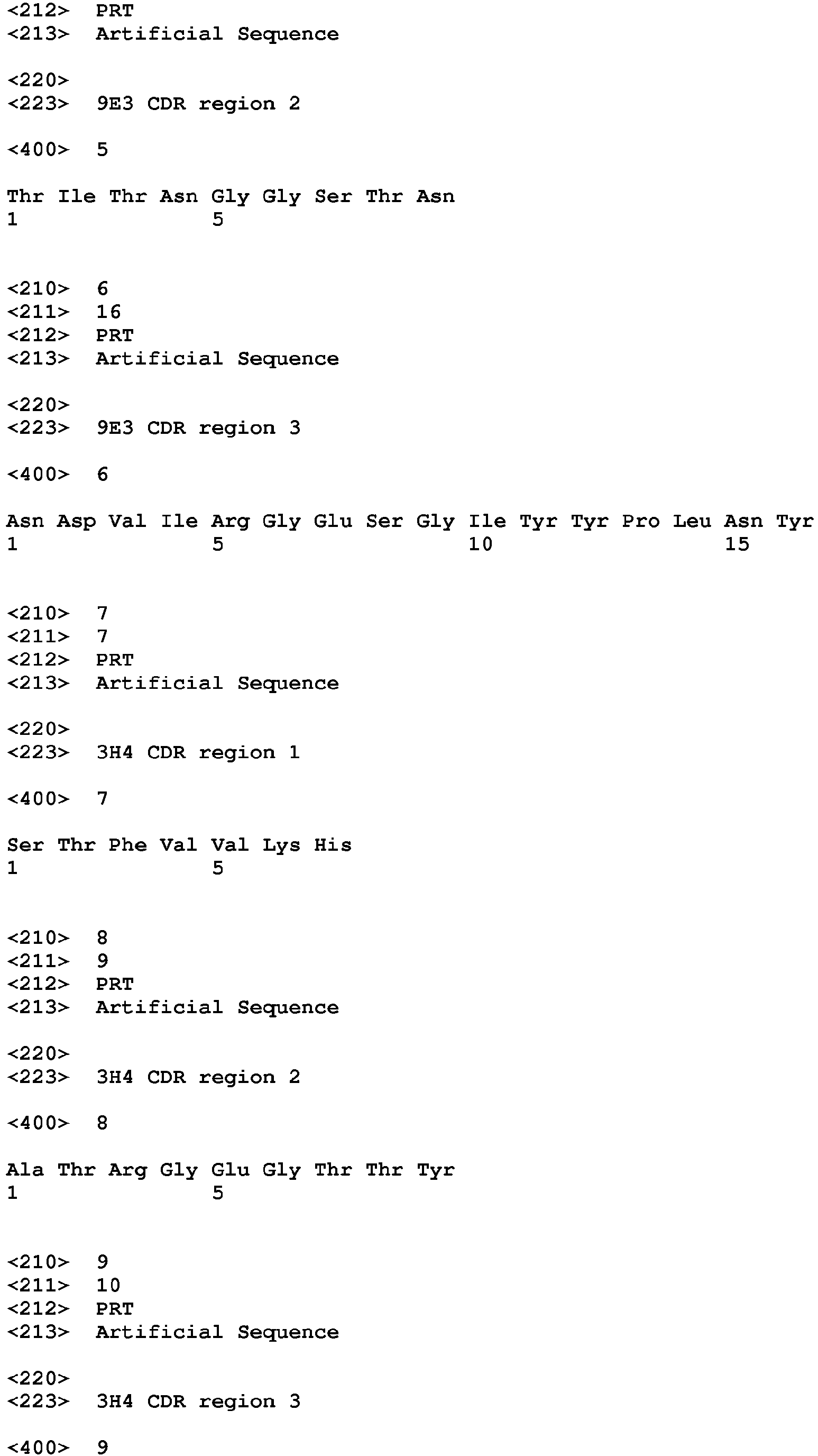 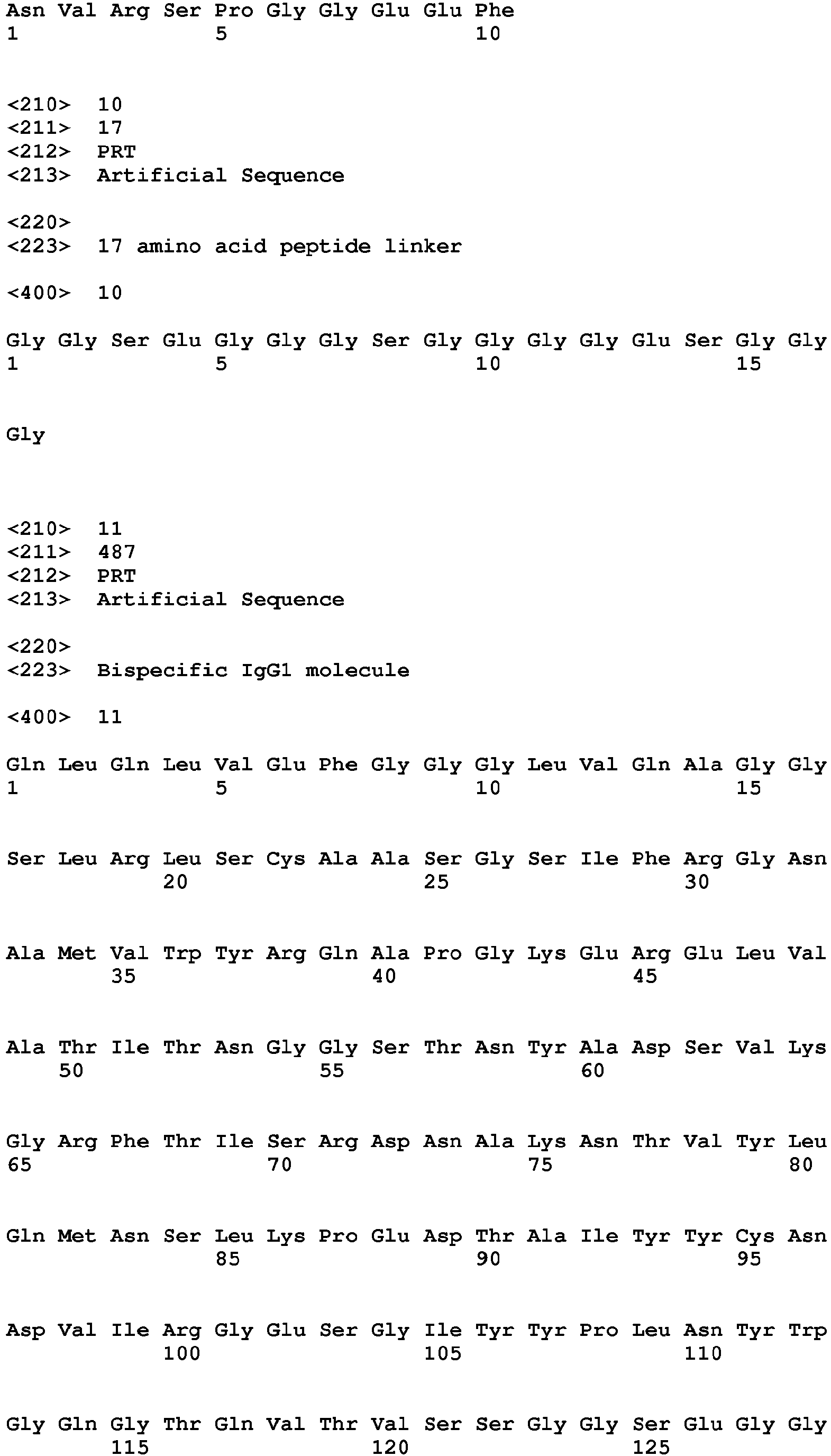 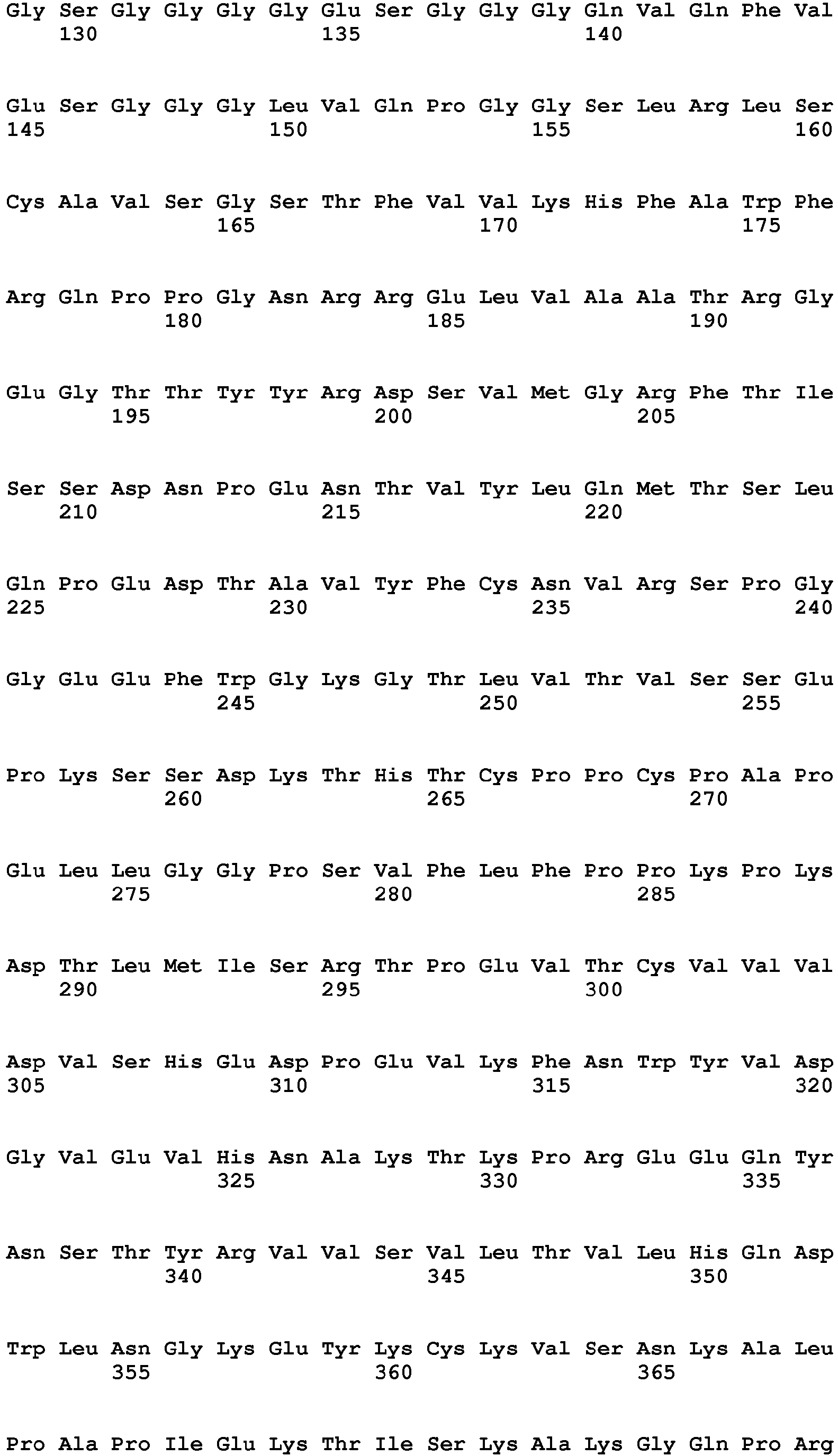 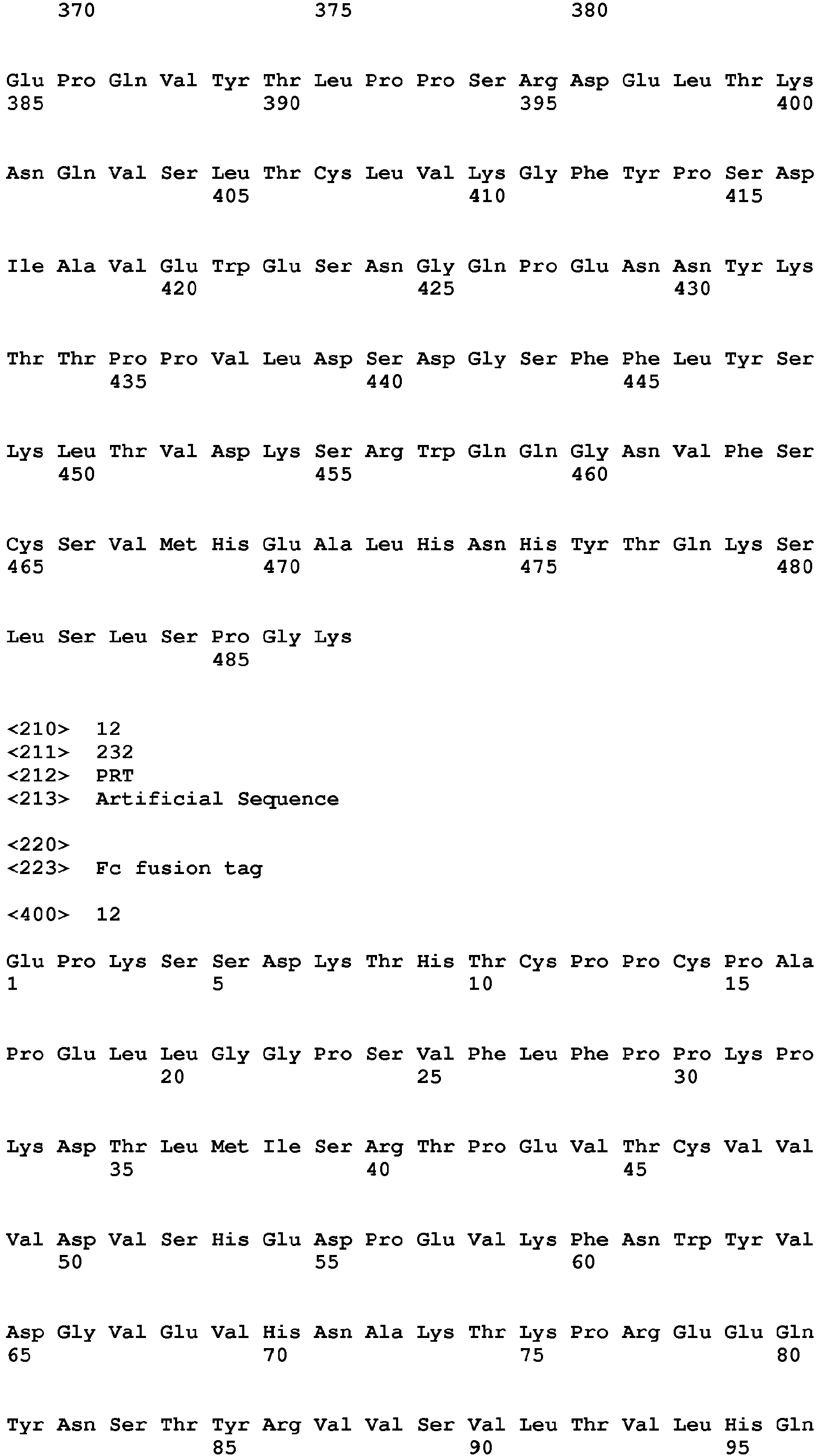 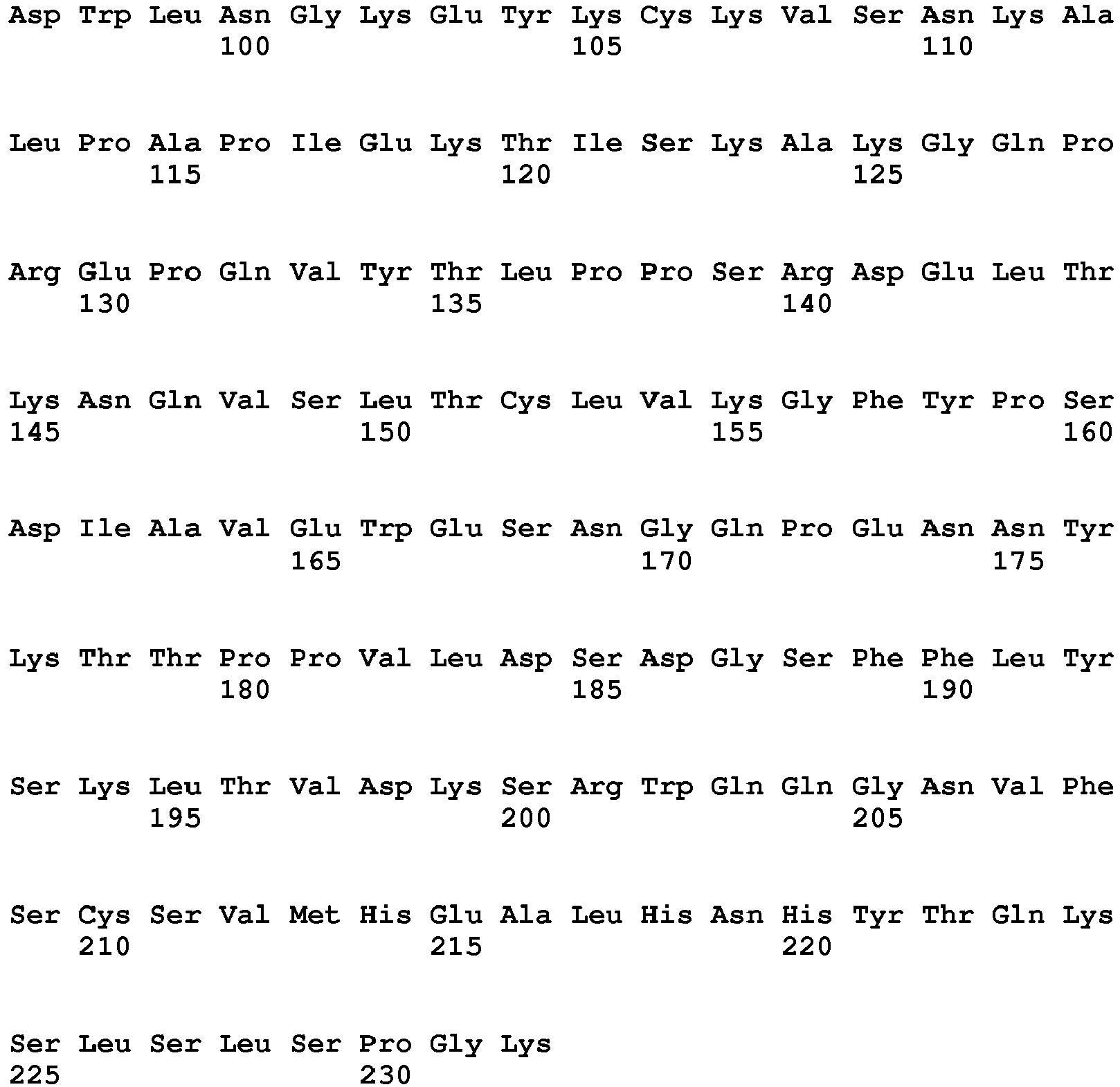 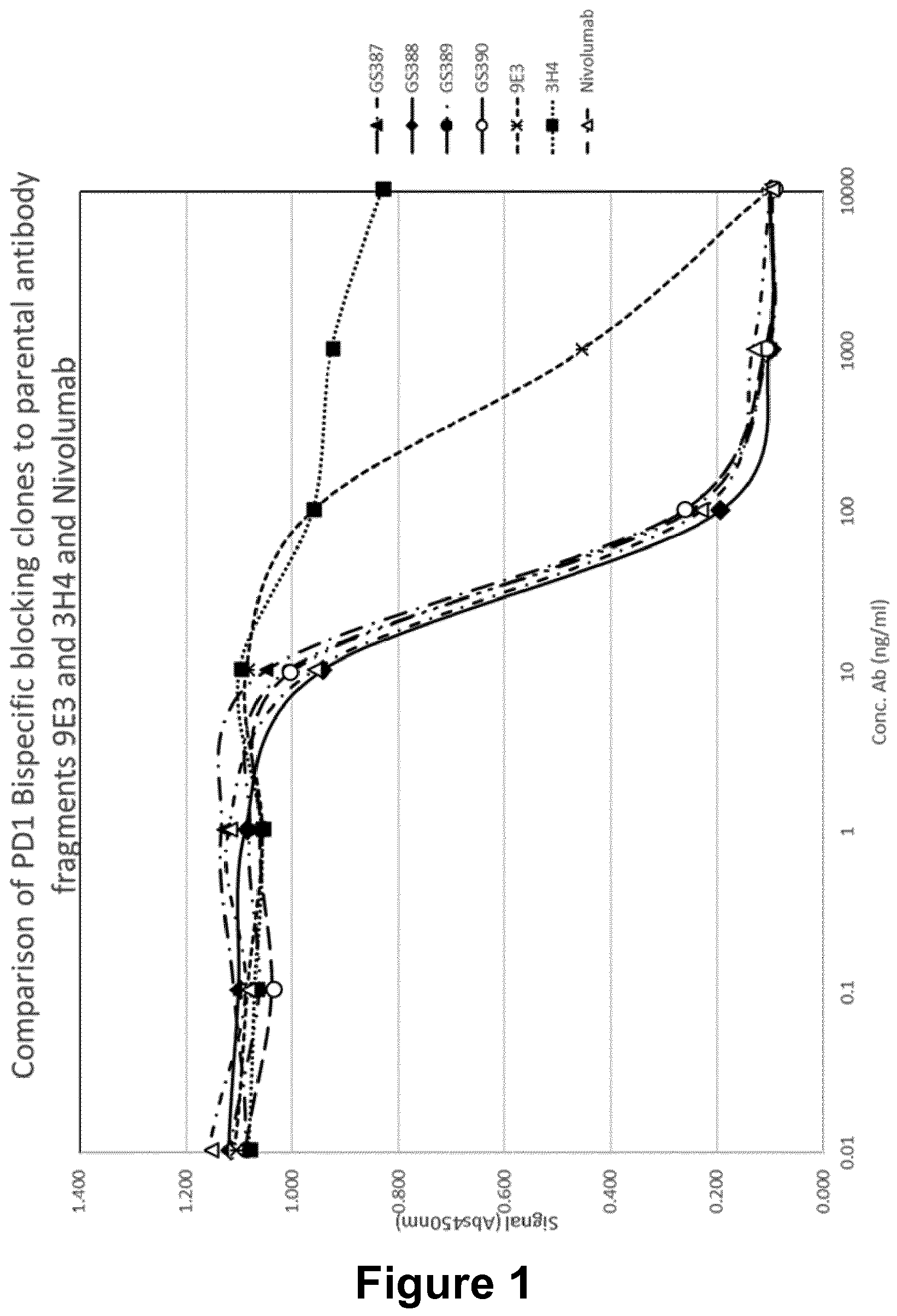 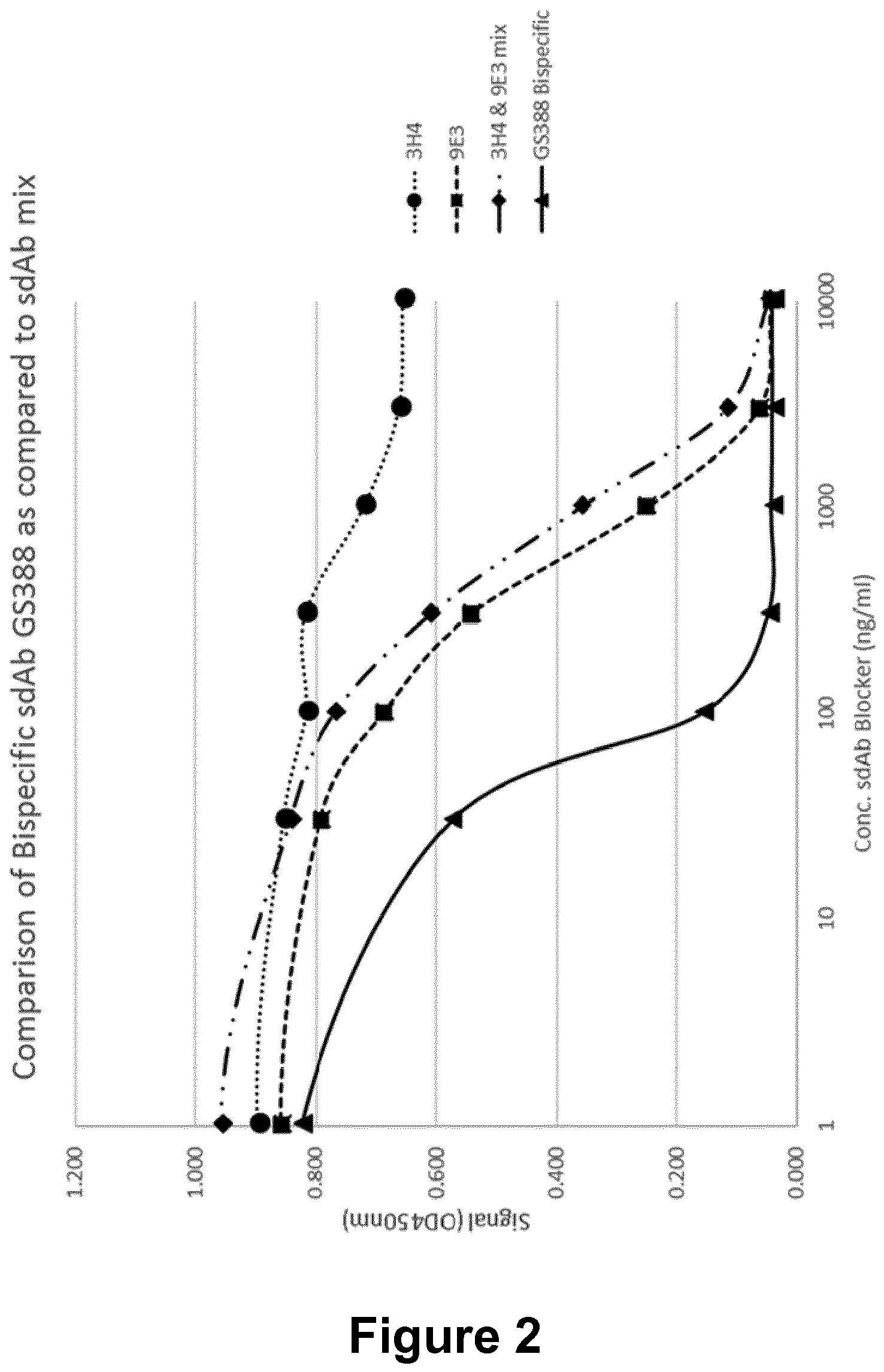 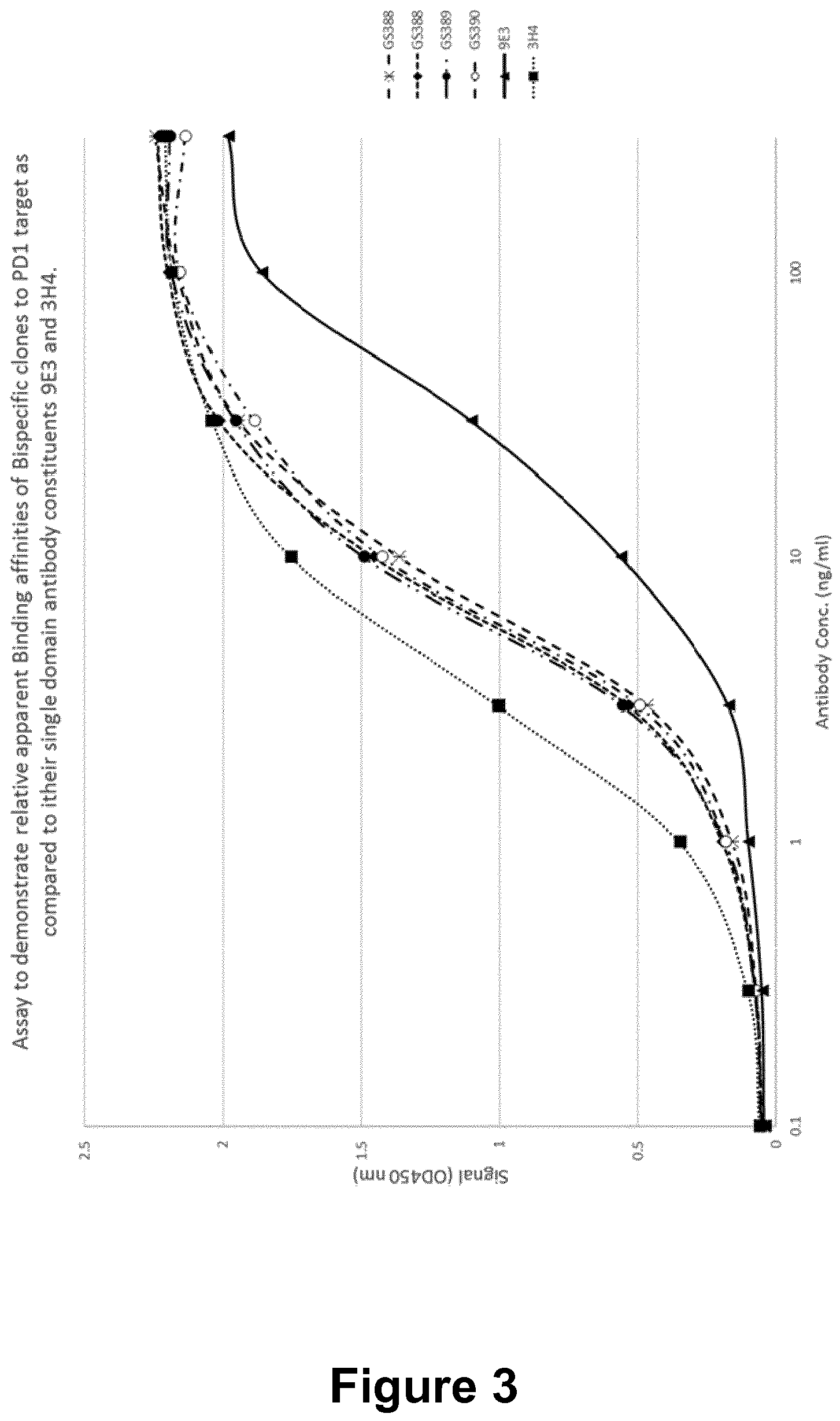 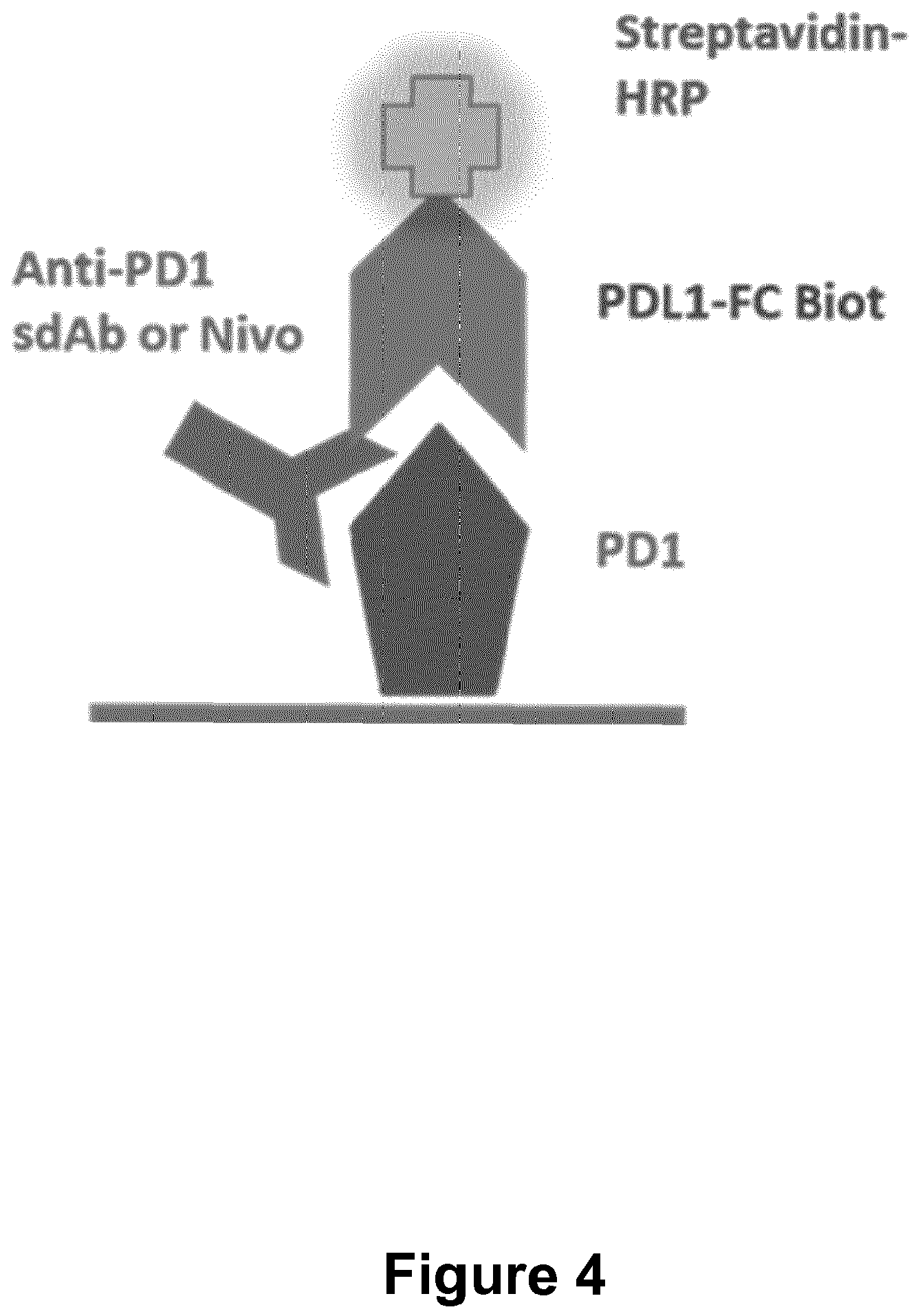 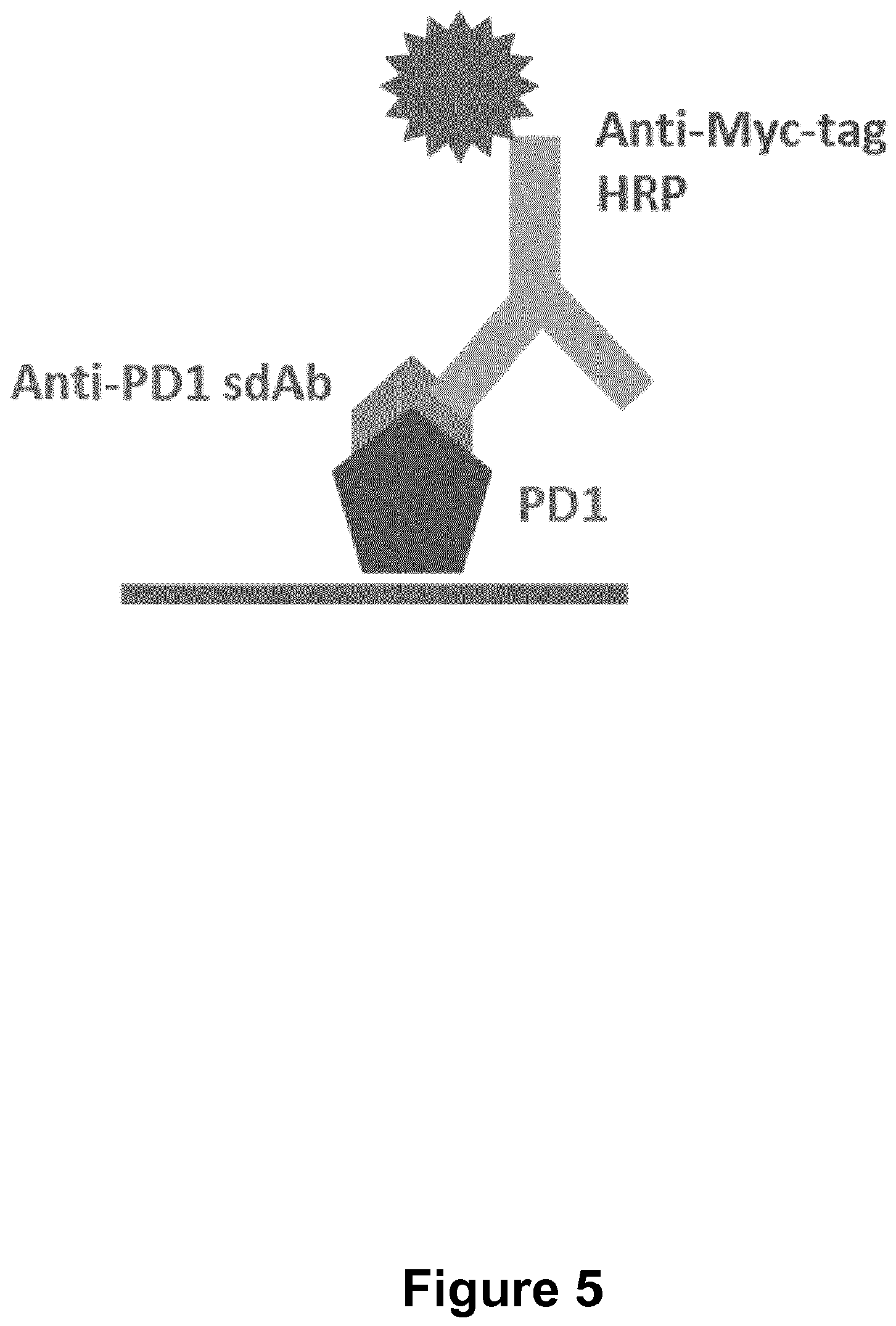 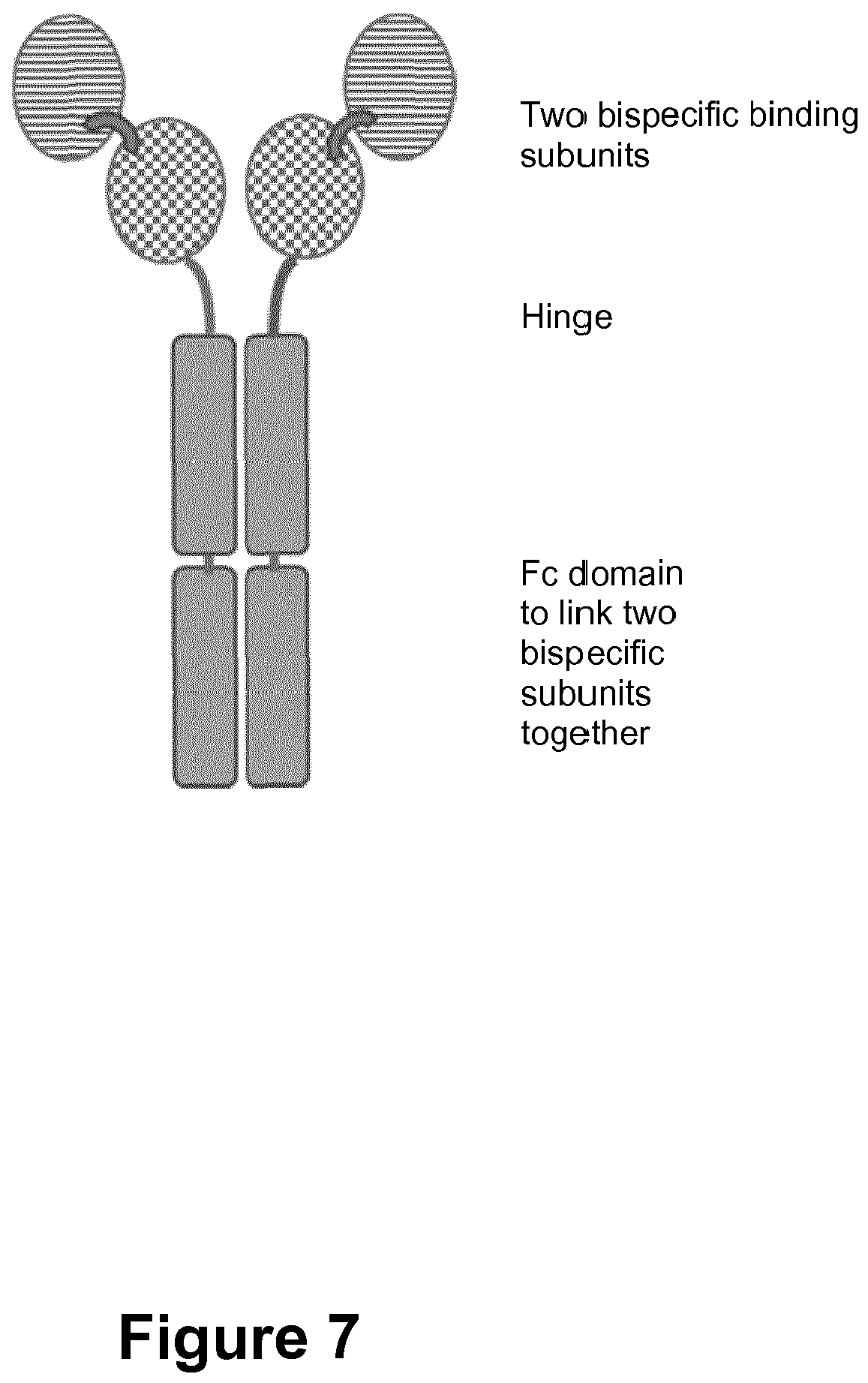 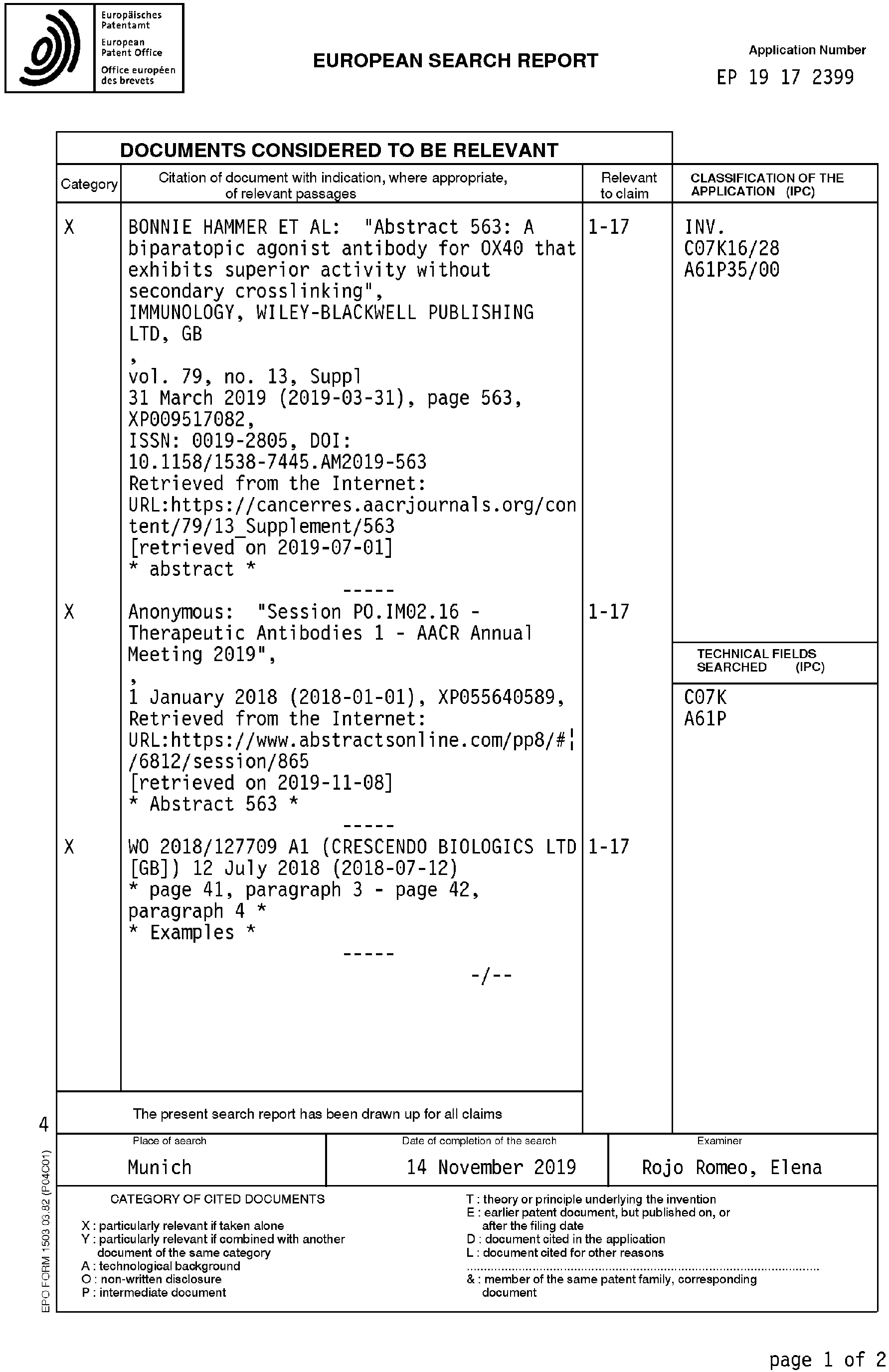 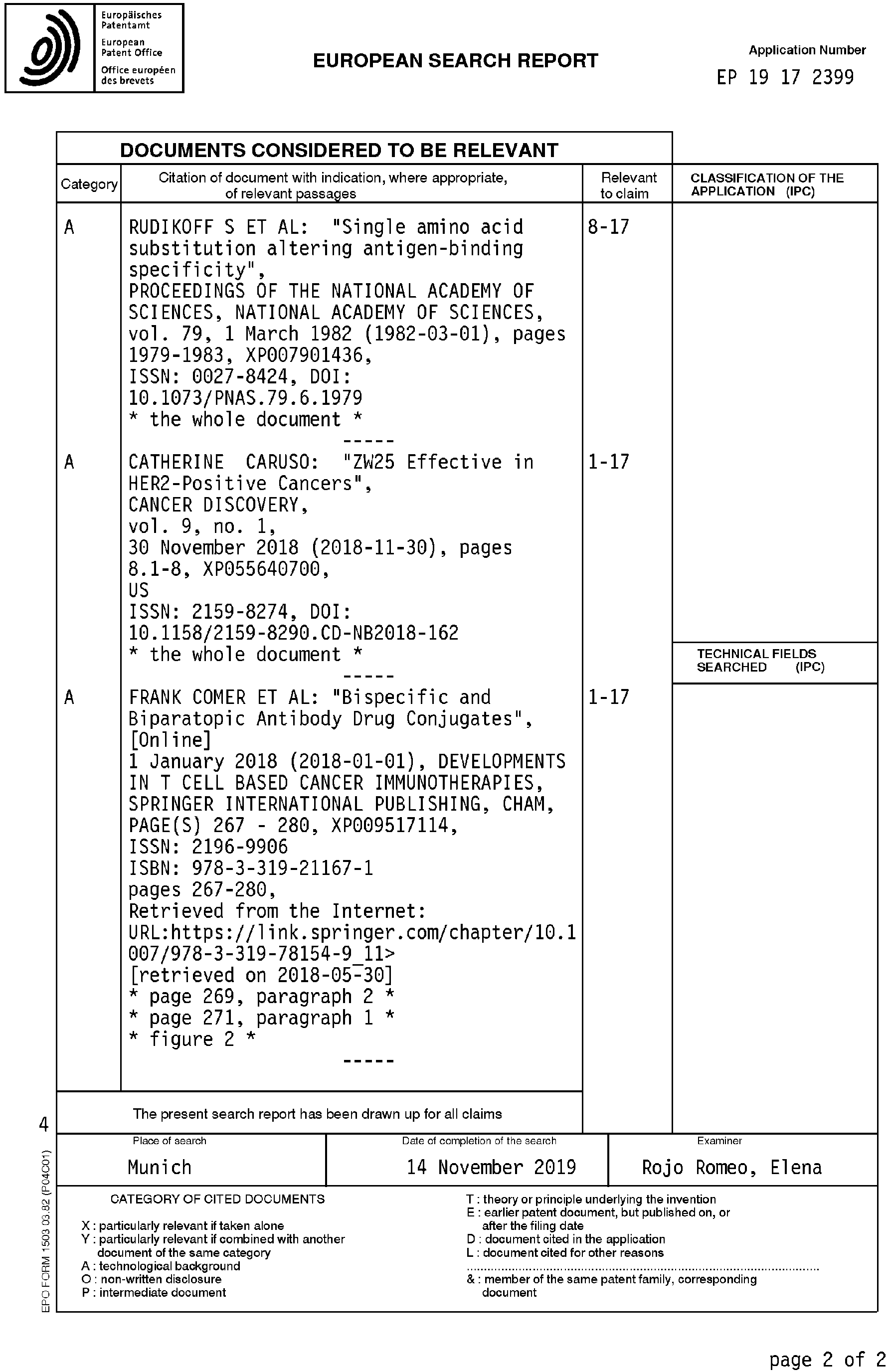 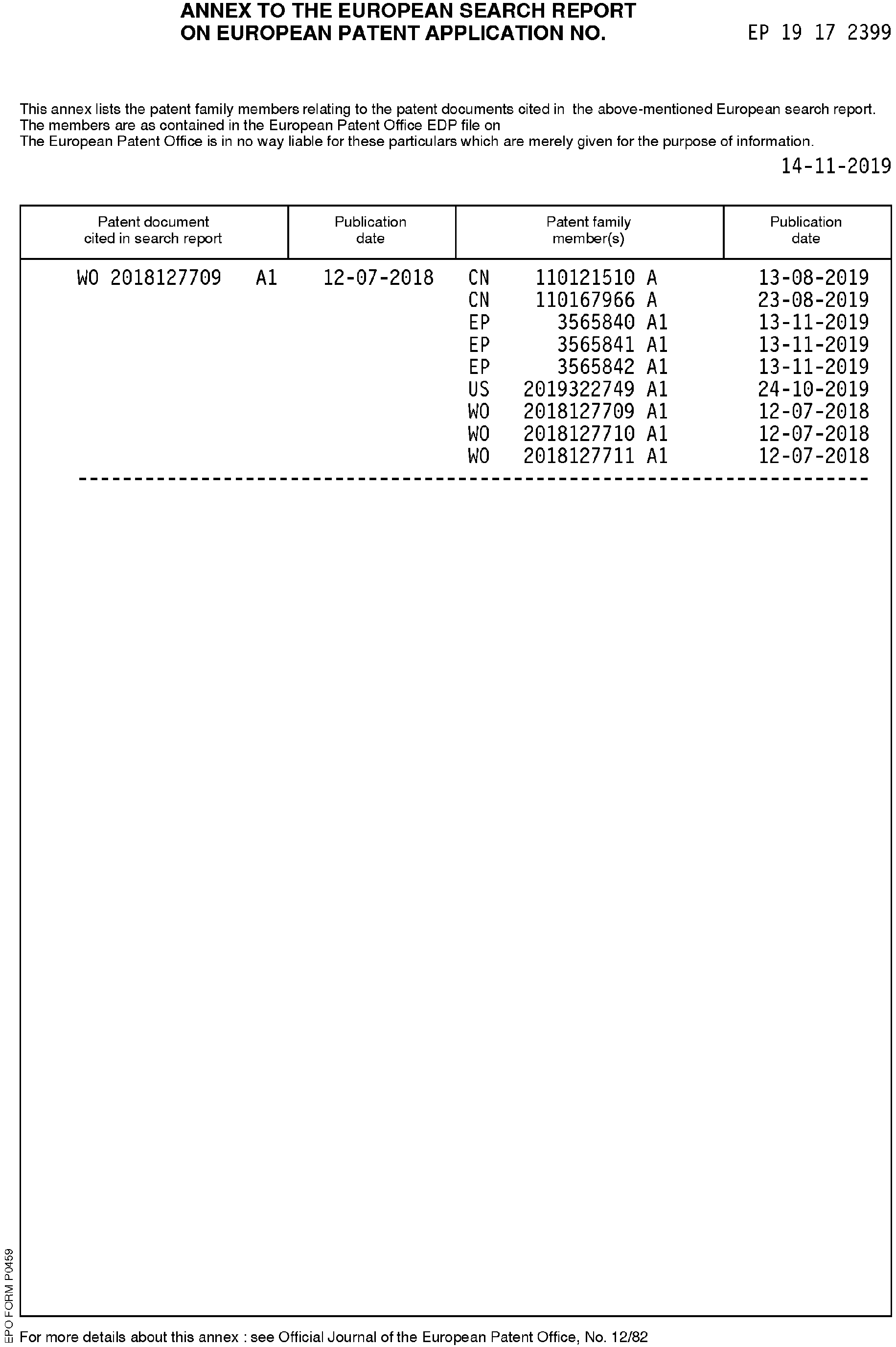