[0001] The technical field of the present invention is controllers for solar photovoltaic power supply systems for running specific equipment, an example of an application of the present invention is for solar powered systems for swimming pool filtering and heating systems, or other systems utilising pumps, DC motors, resistive and inductive heating loads.

[0002] Swimming pool systems require constant circulation and filtering of water to maintain a clean and healthy environment. Some swimming pool systems also have water heaters to extend the use of the pool through the changing seasons. To maintain a healthy pool the pumping system must be operated continuously through the year, even during months when the pool is not being used for swimming to prevent the water stagnating. The energy requirements for maintaining a pool can be significant, and can be particularly expensive if the pool system is powered using mains electricity.
[0003] Solar power, in particular photovoltaic (PV) solar power, is an attractive option for powering swimming pool systems. Solar power it is clean, renewable and economical. Further, swimming pools typically have a higher rate of use during the best time for harvesting solar energy - on sunny days during the warmer months of the year with longer daylight hours. Utilising a bank of solar PV panels and optionally solar water heating can significantly reduce both the monetary and environmental cost for energy to maintain a swimming pool system.
[0004] One drawback to solar PV for pool systems is that the power output from solar panels is not constant, and an alternative power supply is required for operation at night. Further, the solar PV array may not be able to produce sufficient power to drive the swimming pool system when it is raining or overcast, with low solar energy incident on the solar array. Further, the power output of a solar array can change rapidly, for example due to temporary shading of the solar PV array by clouds. Swimming pool systems may require more power to maintain operation than is output by a solar array in cloudy conditions. This can be a particular problem with swimming pool systems if pumps fail due to lack of power. In some systems, pumping failure can lead to other problems due to system components "running dry" or due to air in pipes. Further, restarting a pump in an incorrect state can lead to problems and reduced operational life of the pump and other pool system components. Thus, it is typically not feasible to allow the pumping system to stop and start in response to availability of solar power.
[0005] A solar power system for a pool will typically be a hybrid power system including solar and an alternative power supply, such as a battery backup, generator or mains power and a control system to cause the system to switch to an alternative power supply if the solar supply is inadequate. A known problem with switching between power supplies is maintaining continuity of adequate power to the swimming pool system to maintain operation of the pumps. There is a need for a control system to enable more efficient and reliable transition between power sources to maintain system operation. It is also desirable to maximise power output from the solar system.

[0006] According to the present invention, there is provided a hybrid solar power supply unit control system comprising:

Figure 1 shows an example of an embodiment of the hybrid power supply control system;

Figure 2 shows a simplified representative example of a power arbiter in accordance with an embodiment of the invention;

Figure 3 is block diagram of a preferred embodiment of the system;

Figure 4 shows a graph of typical setup conditions for transition;

Figure 5a and 5b are representative highly simplified circuit block diagrams of an embodiment of a hybrid solar power system used to illustrate different operating conditions; and

Figure 6 is a flowchart of an example of a process for mppt testing under varying load. 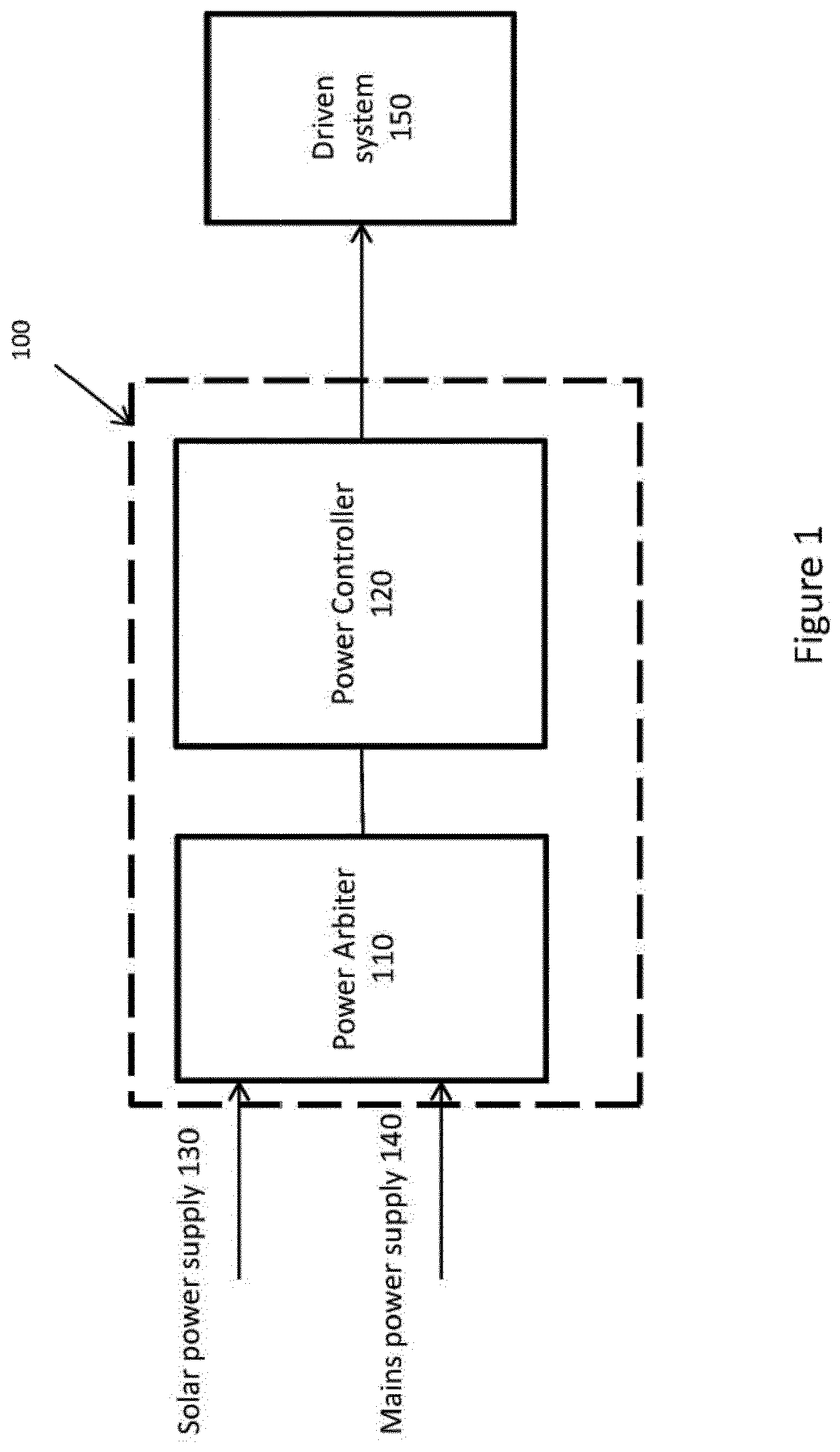 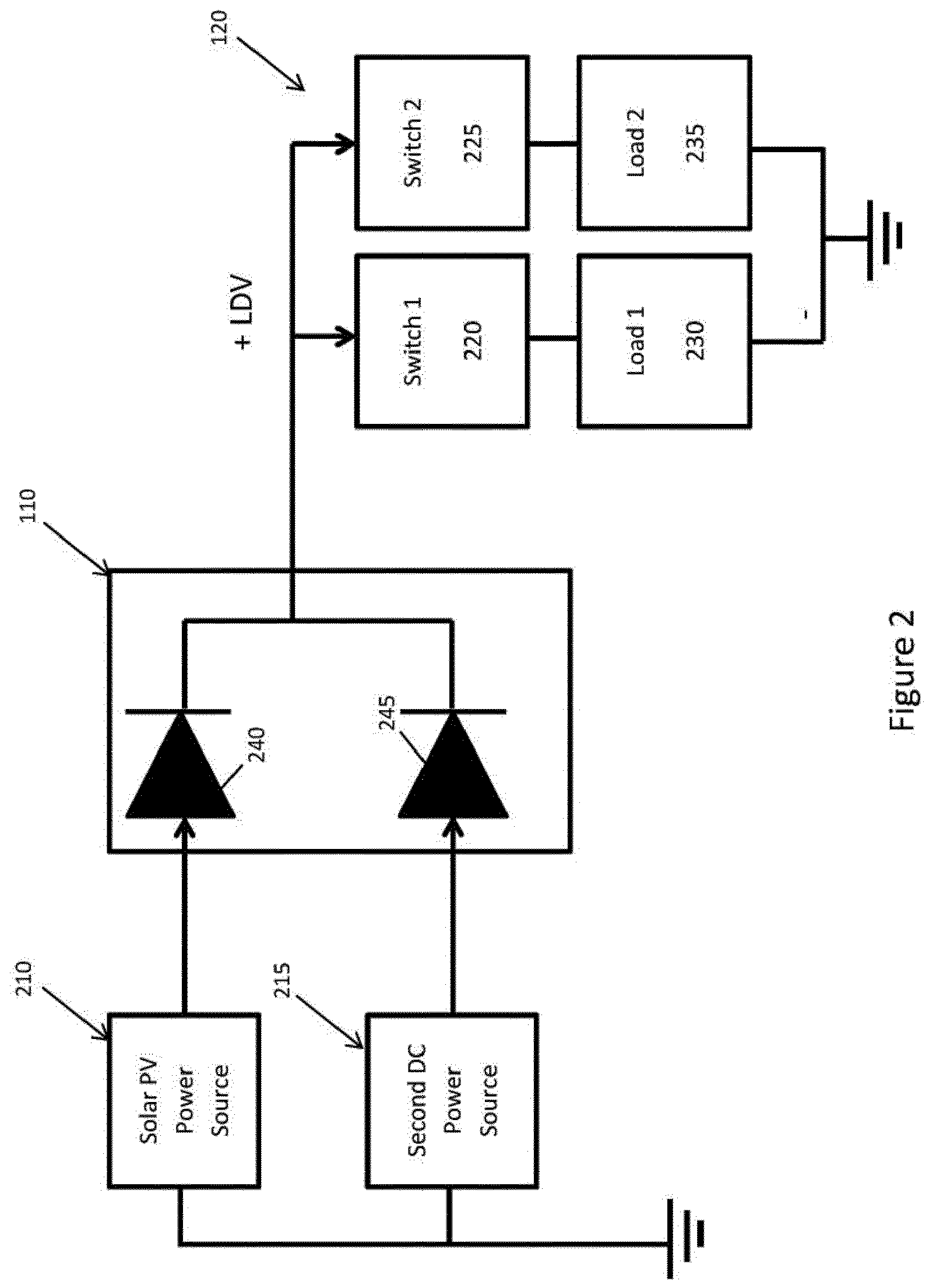 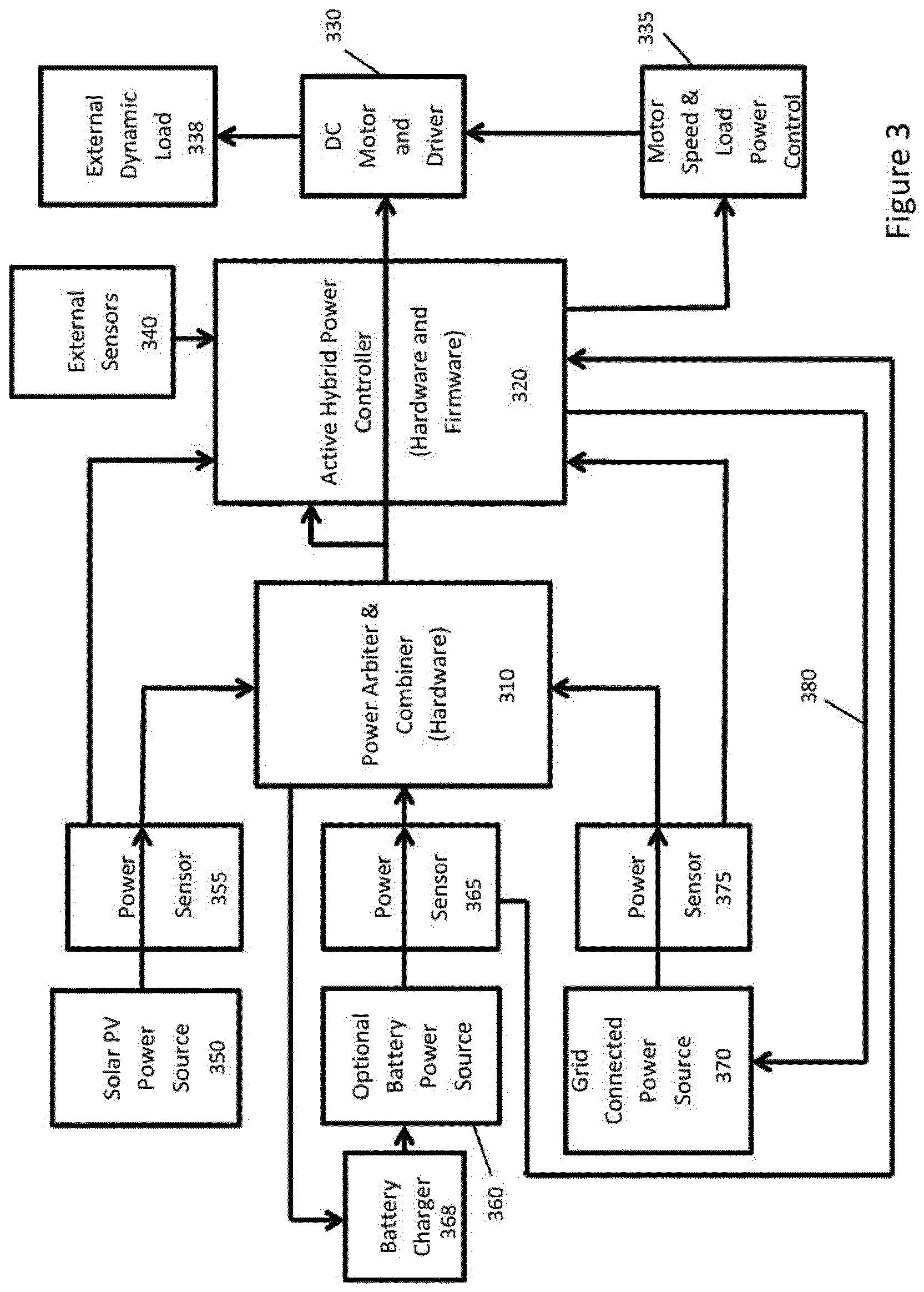 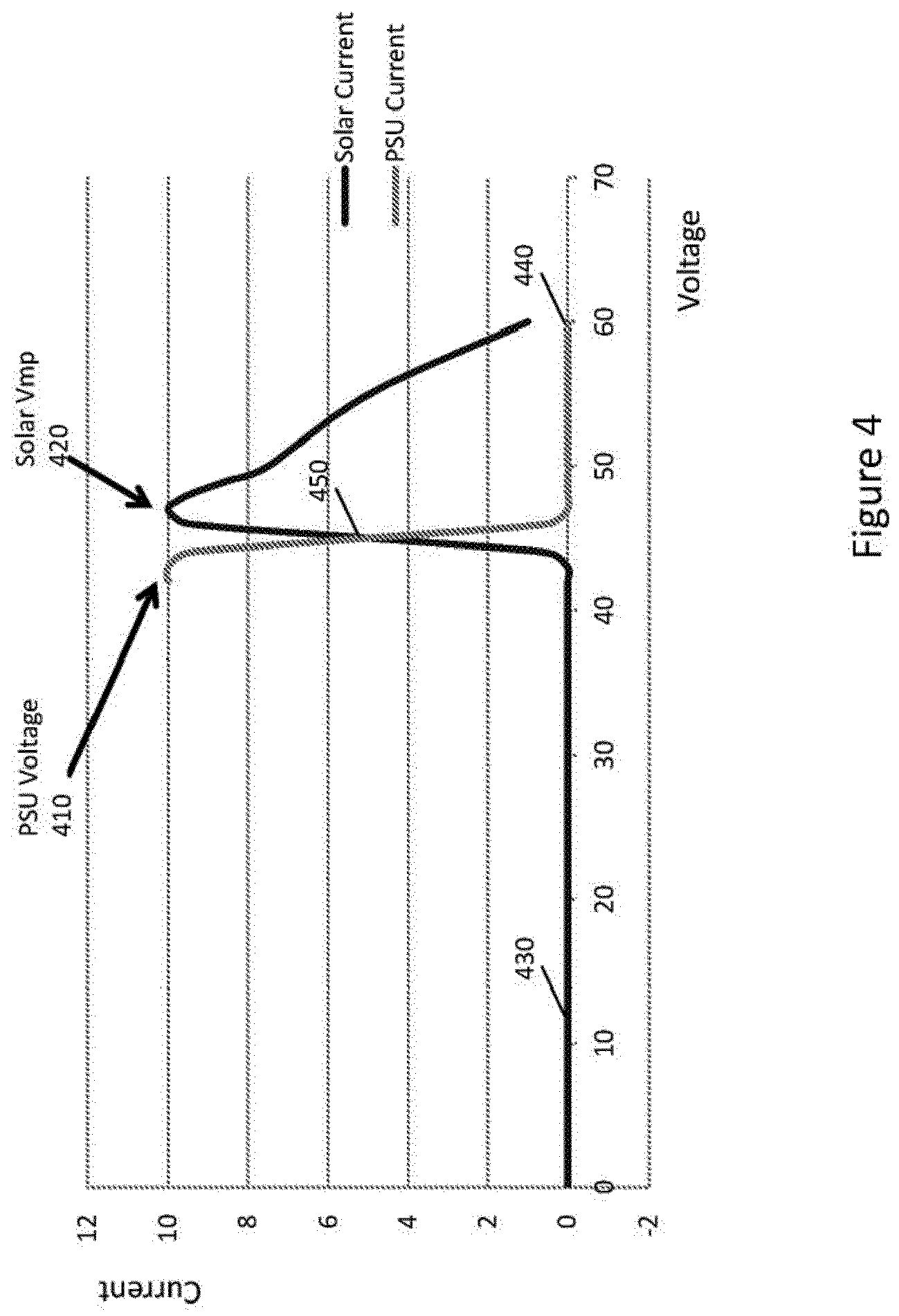 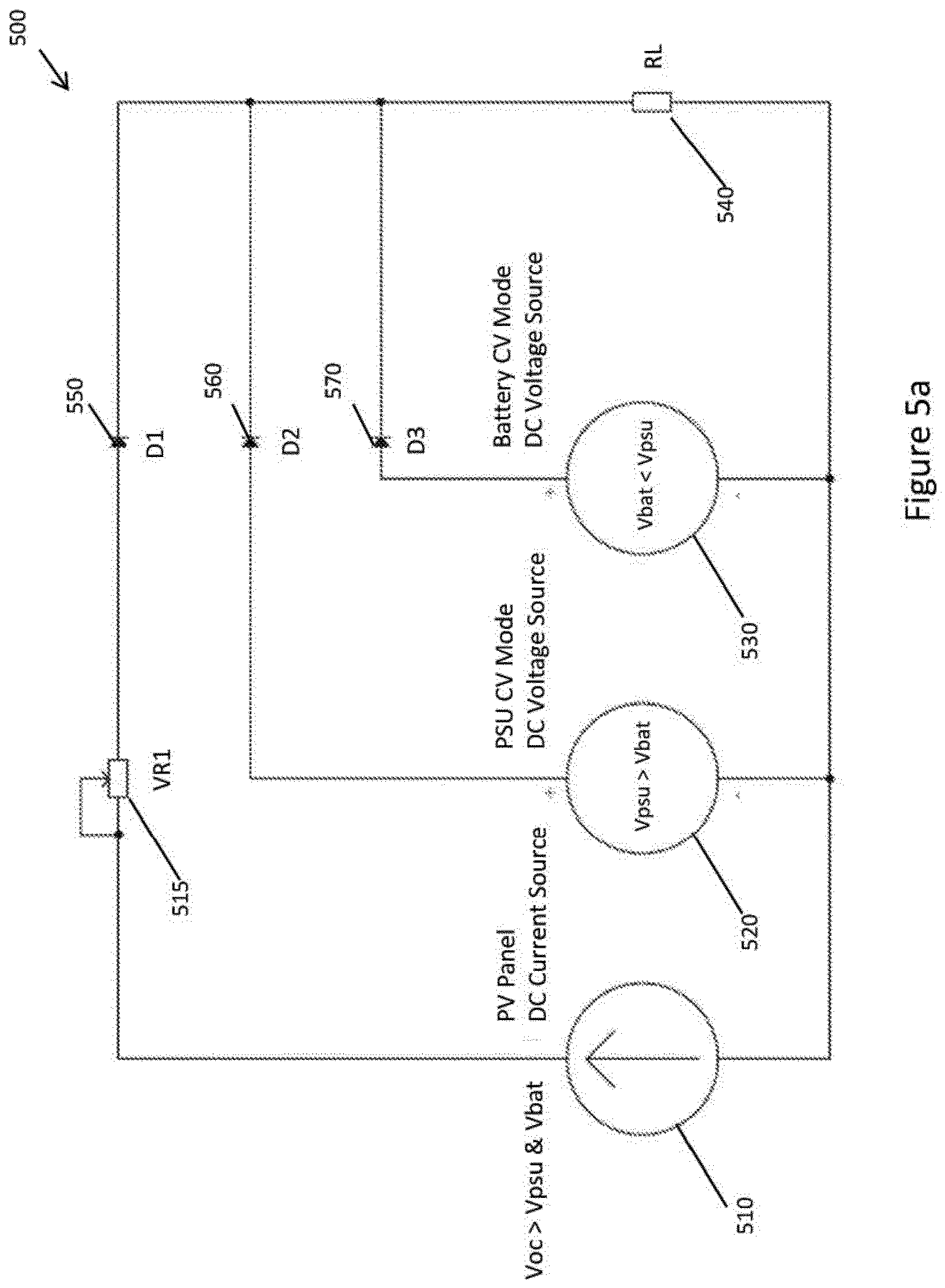 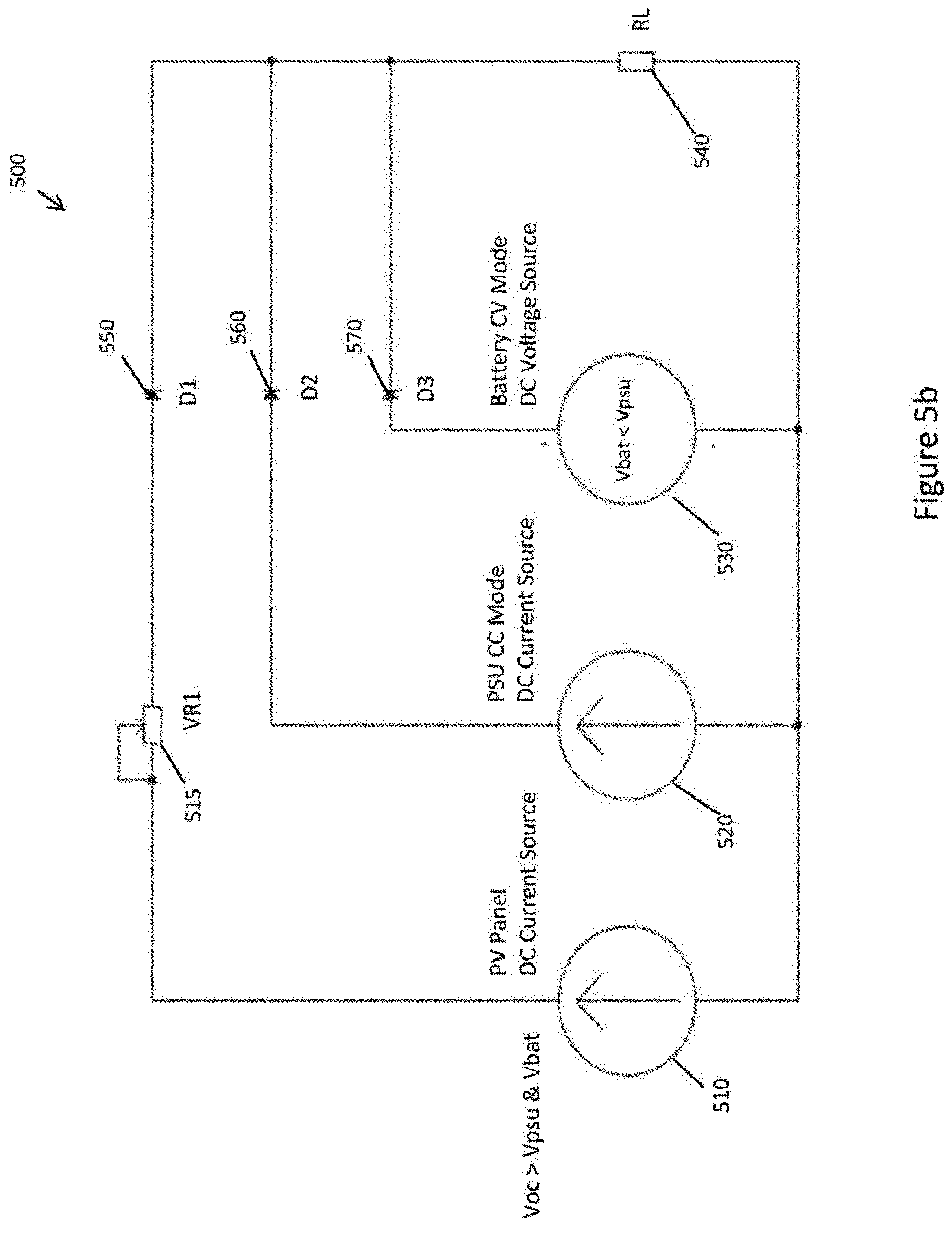 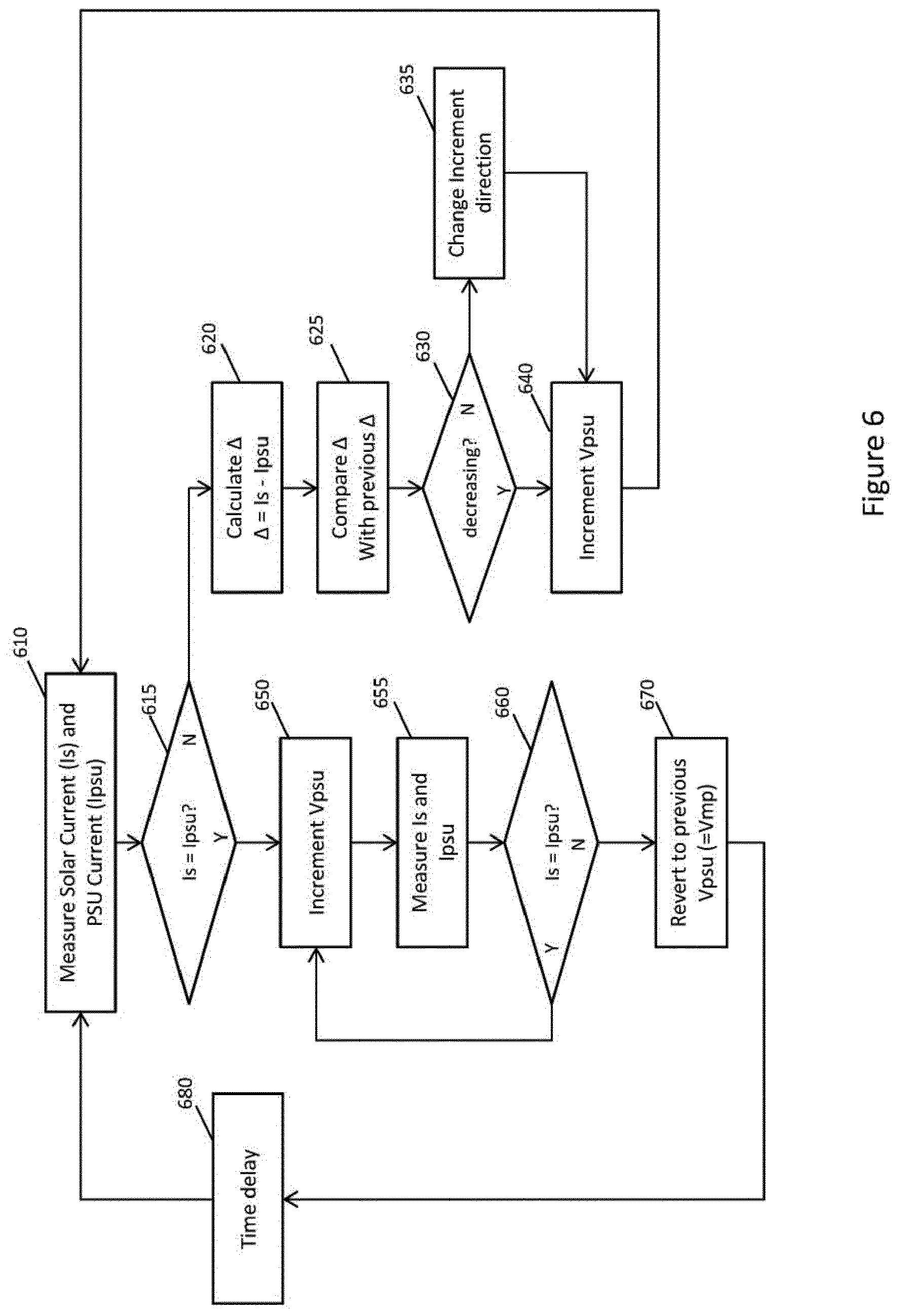 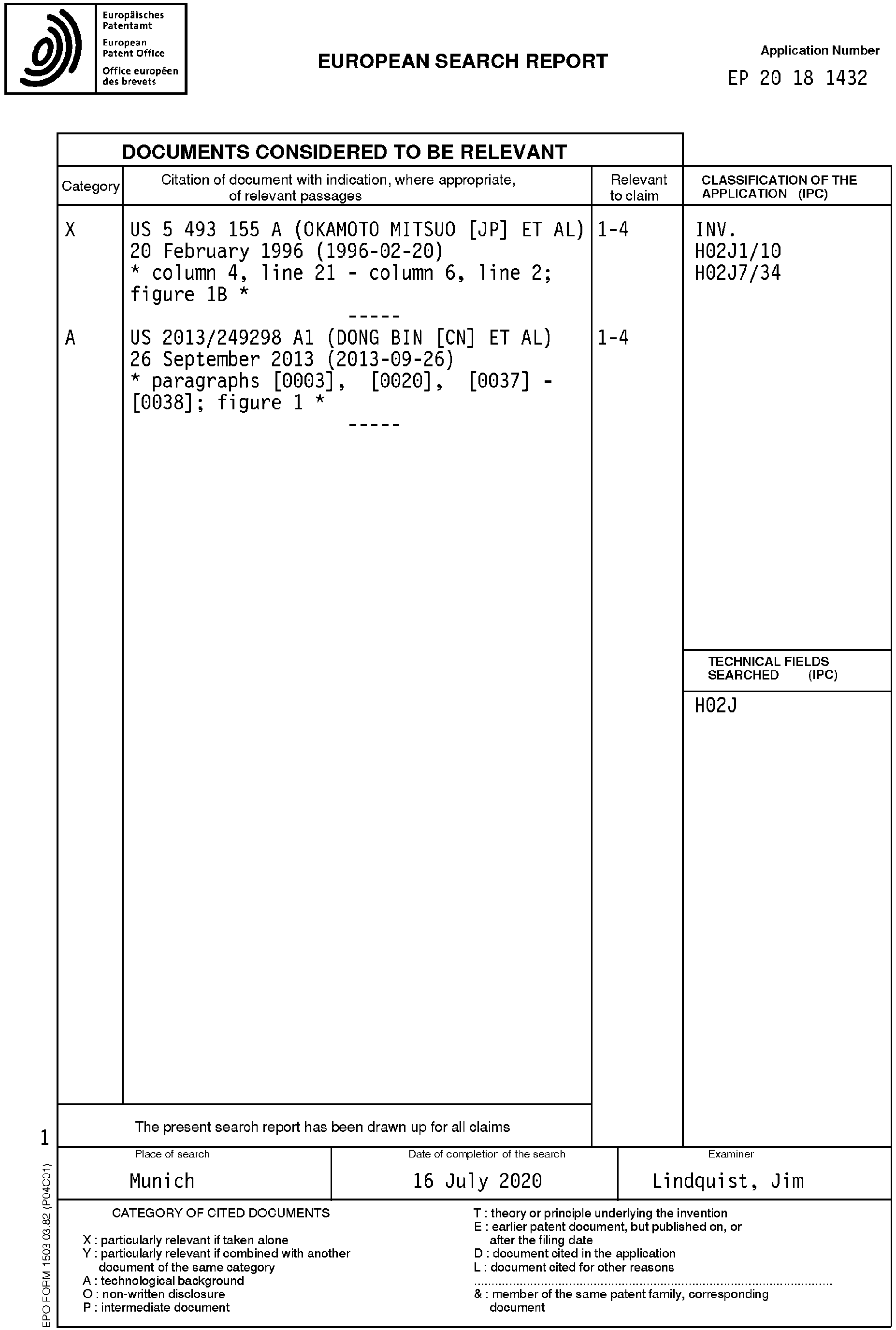 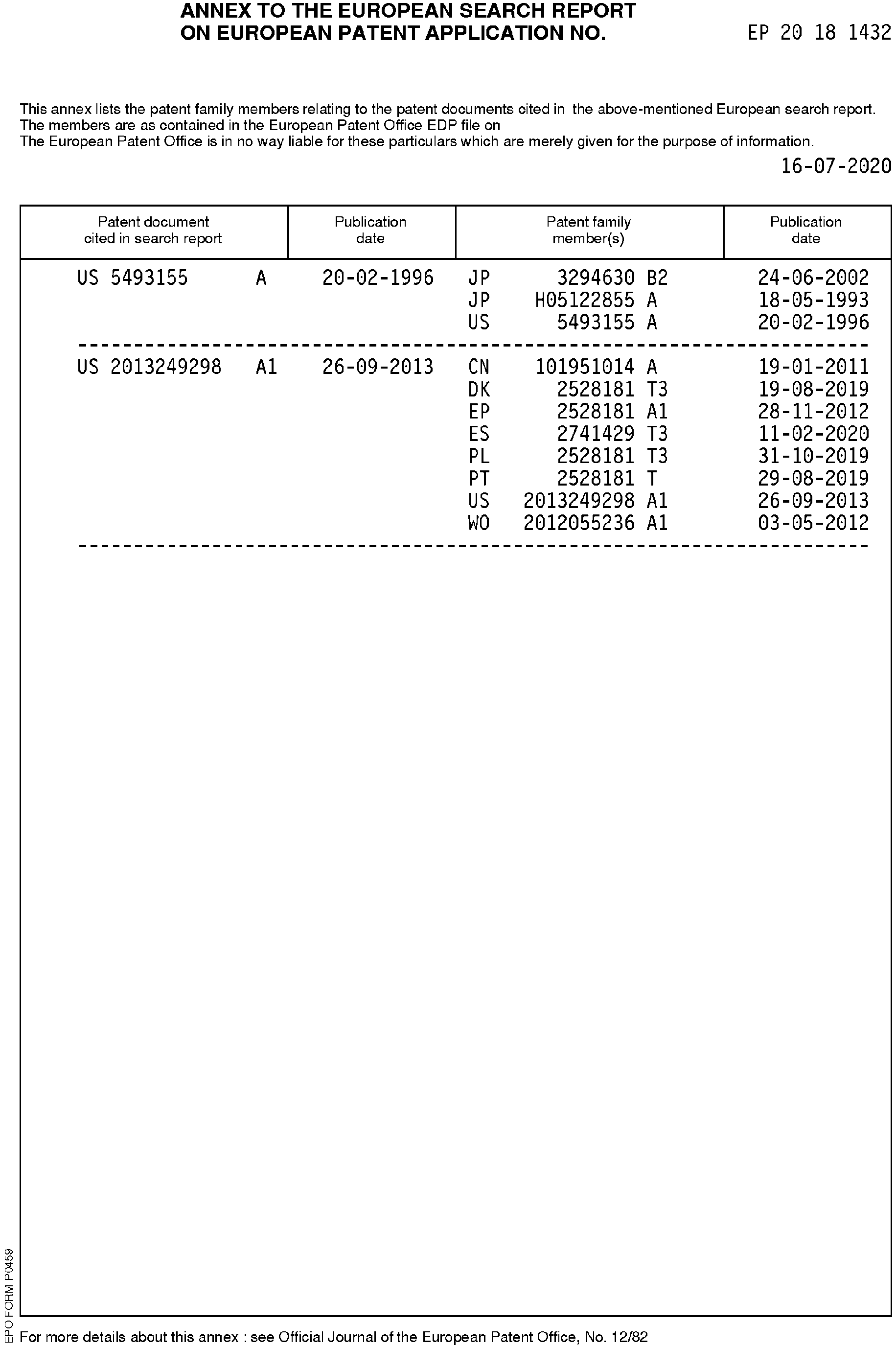